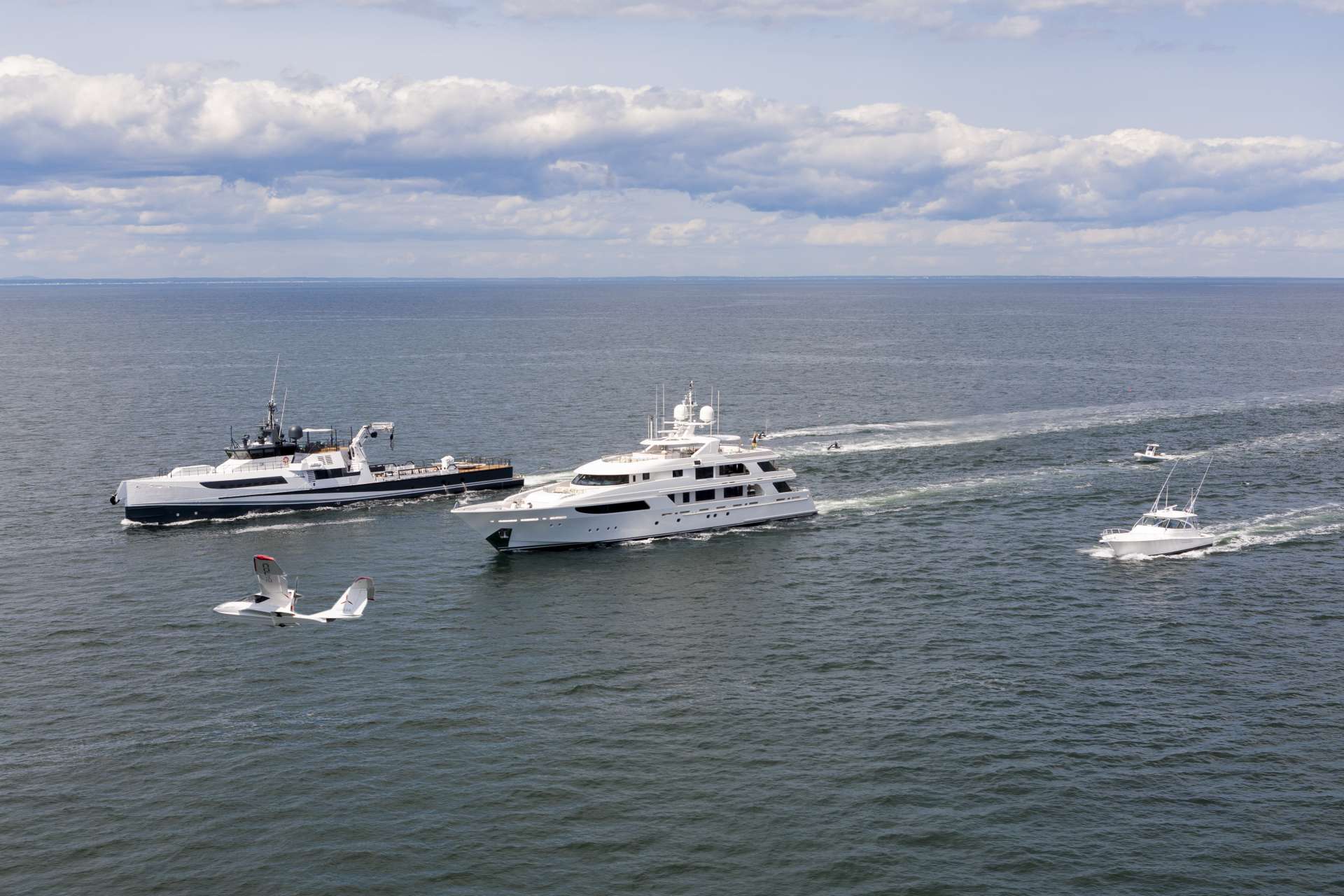 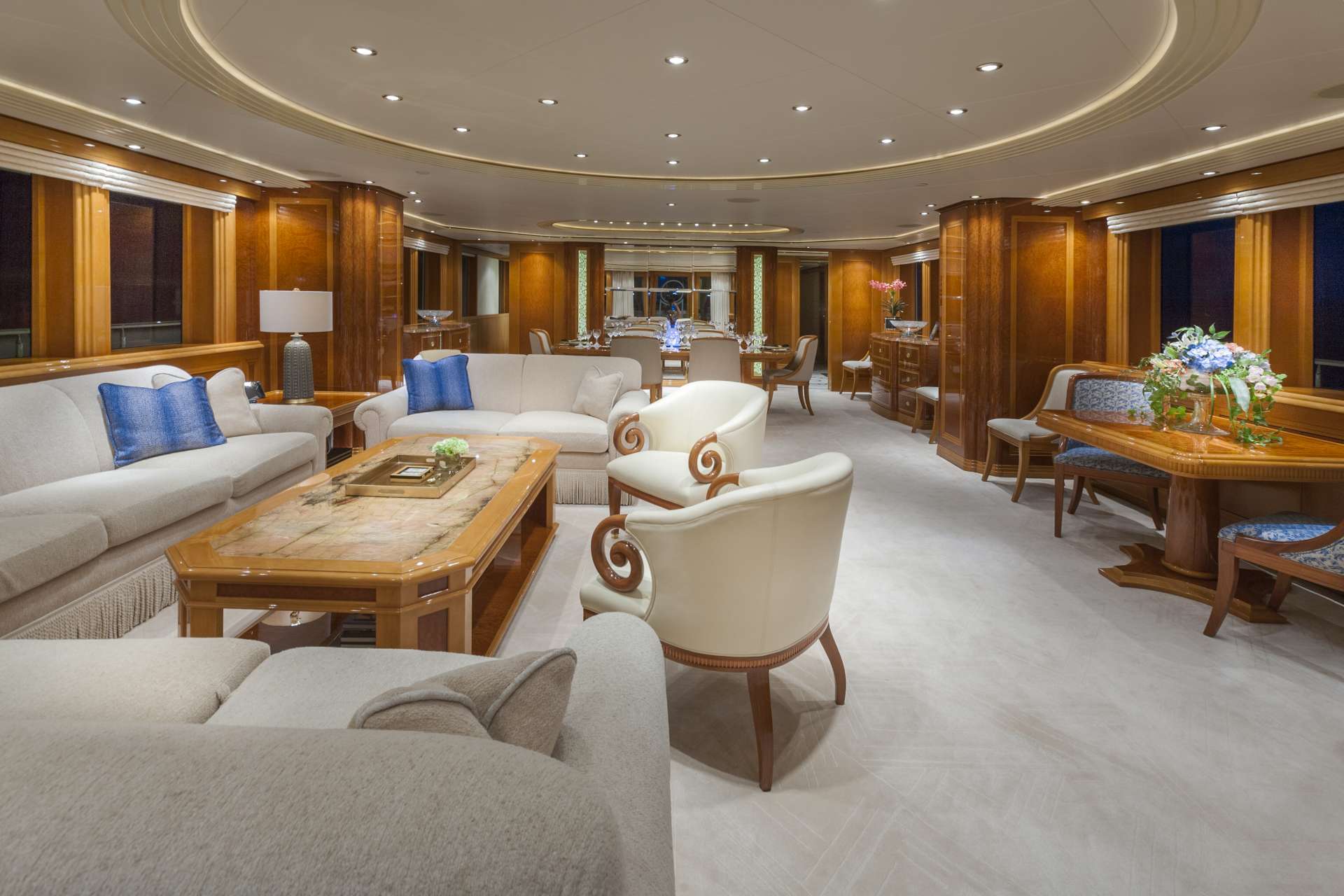 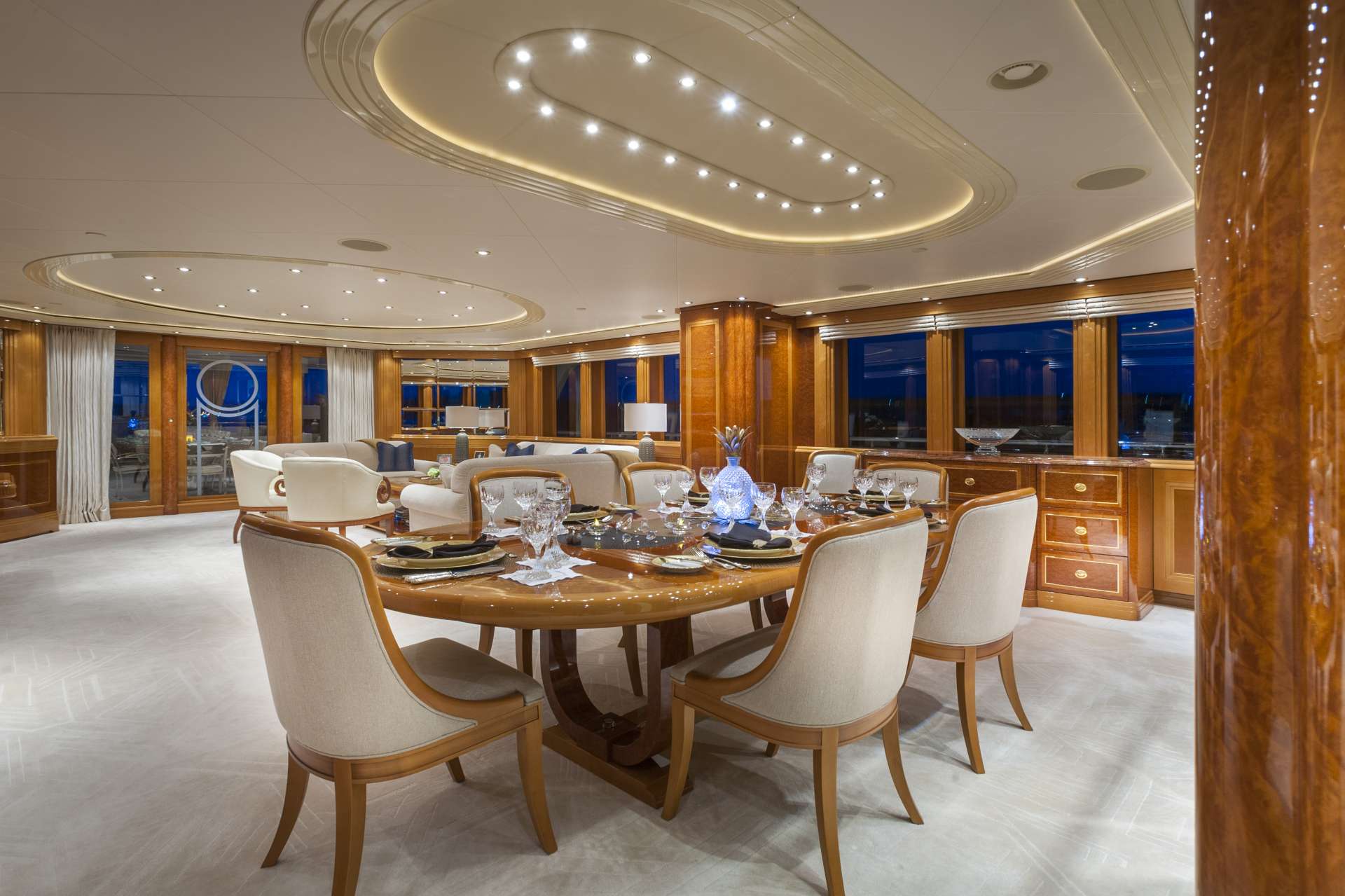 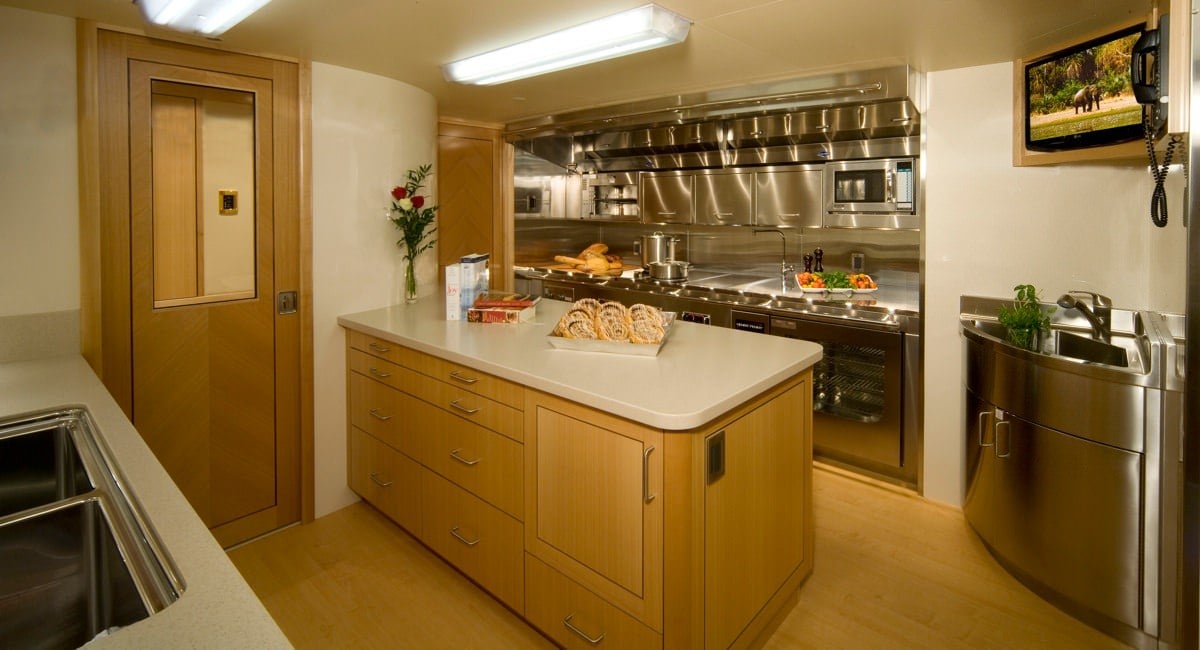 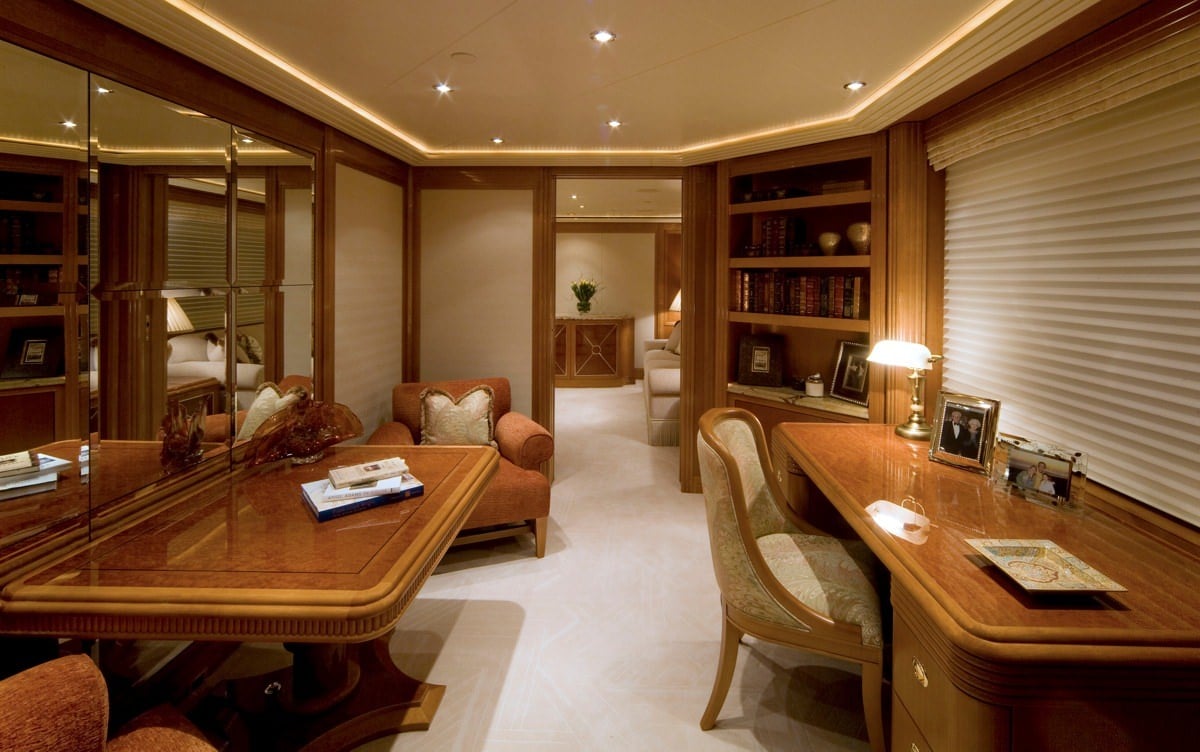 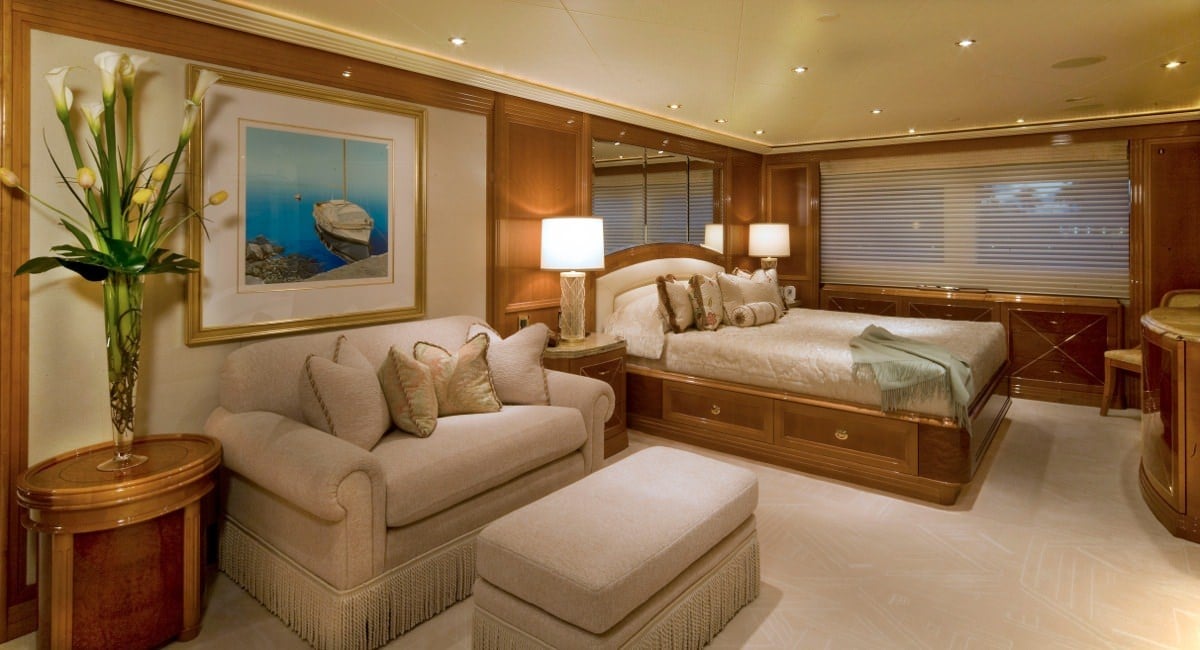 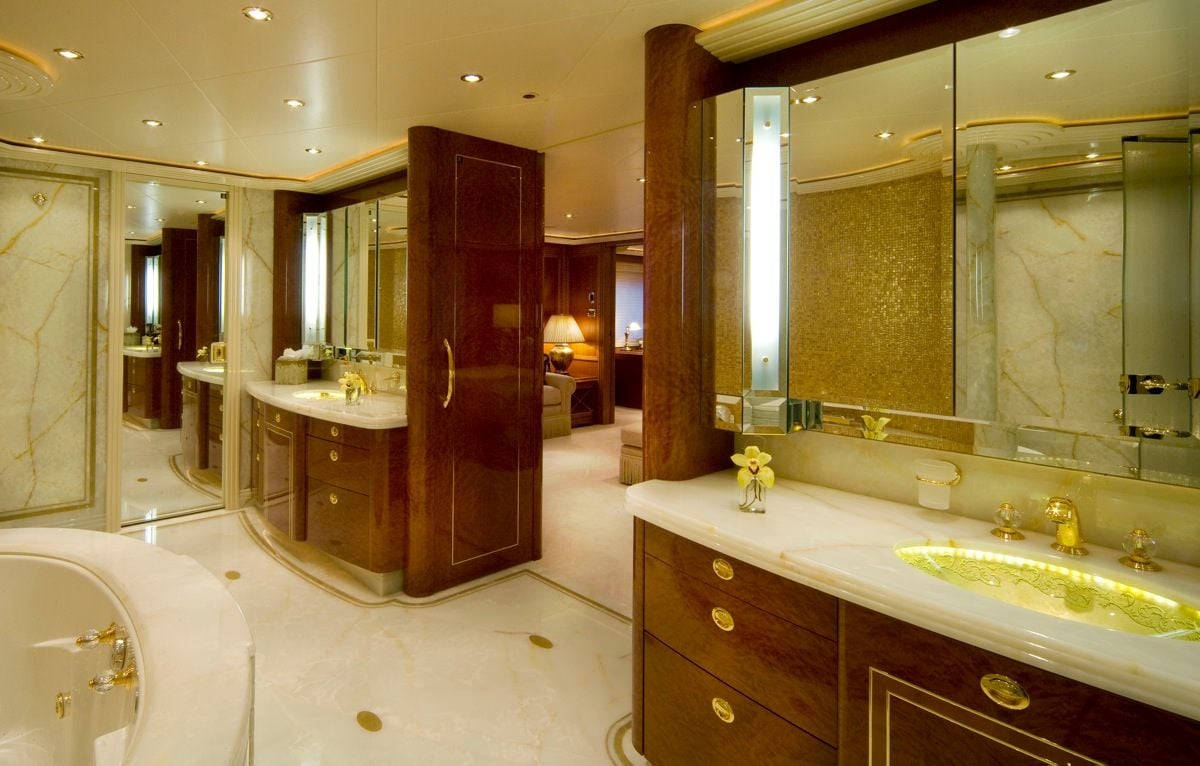 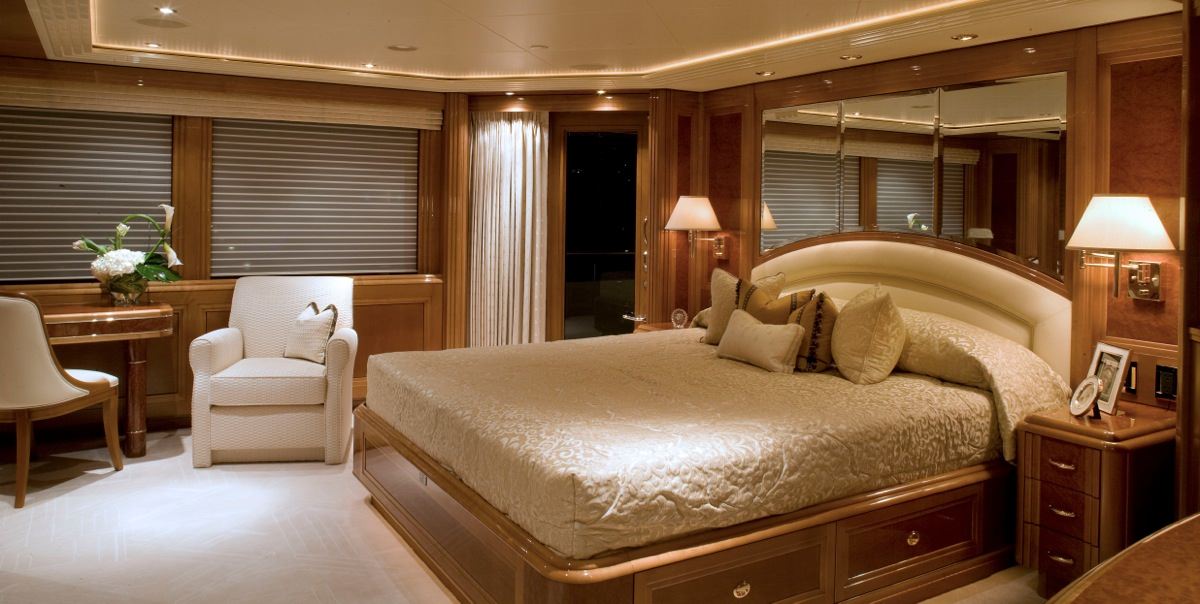 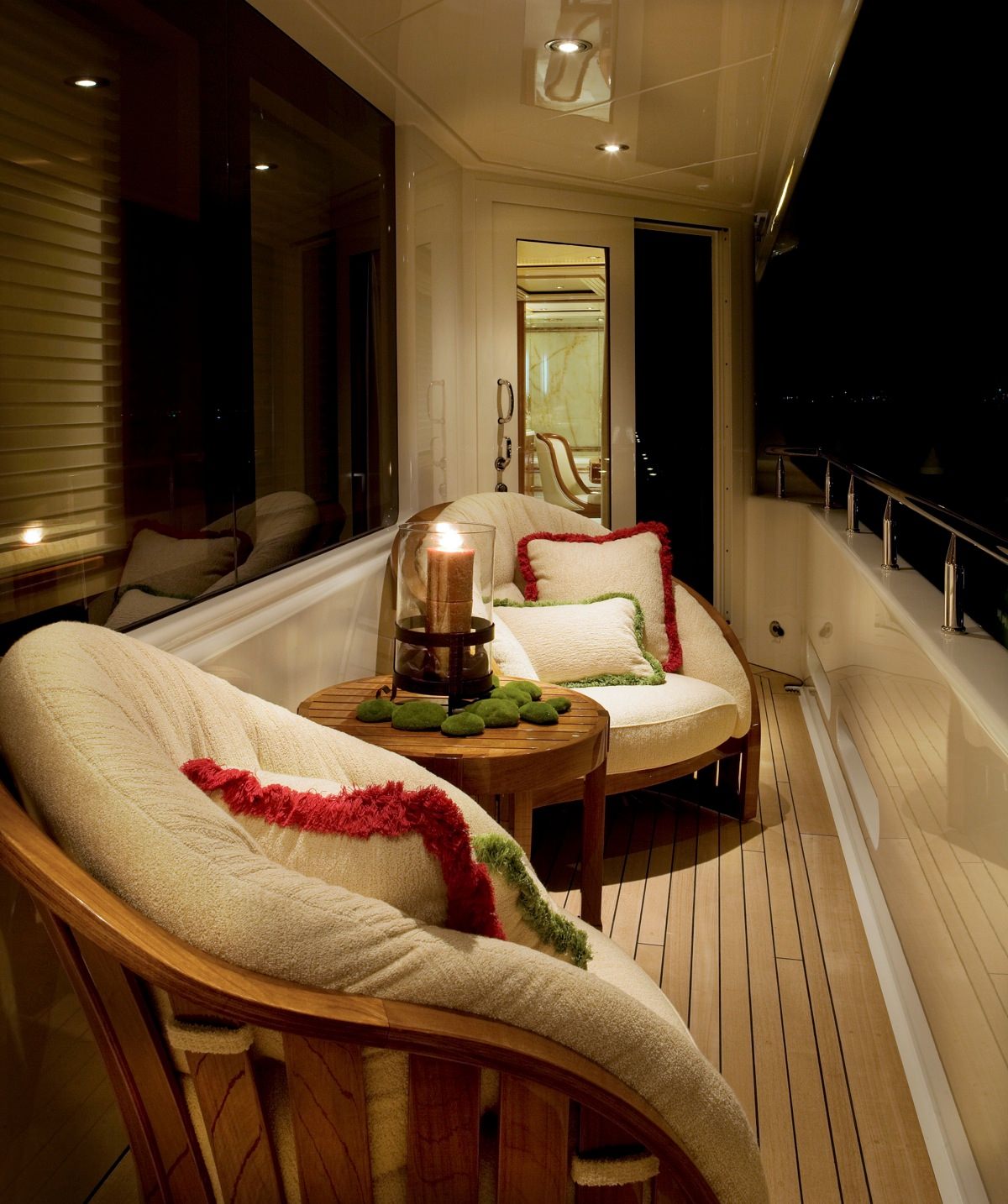 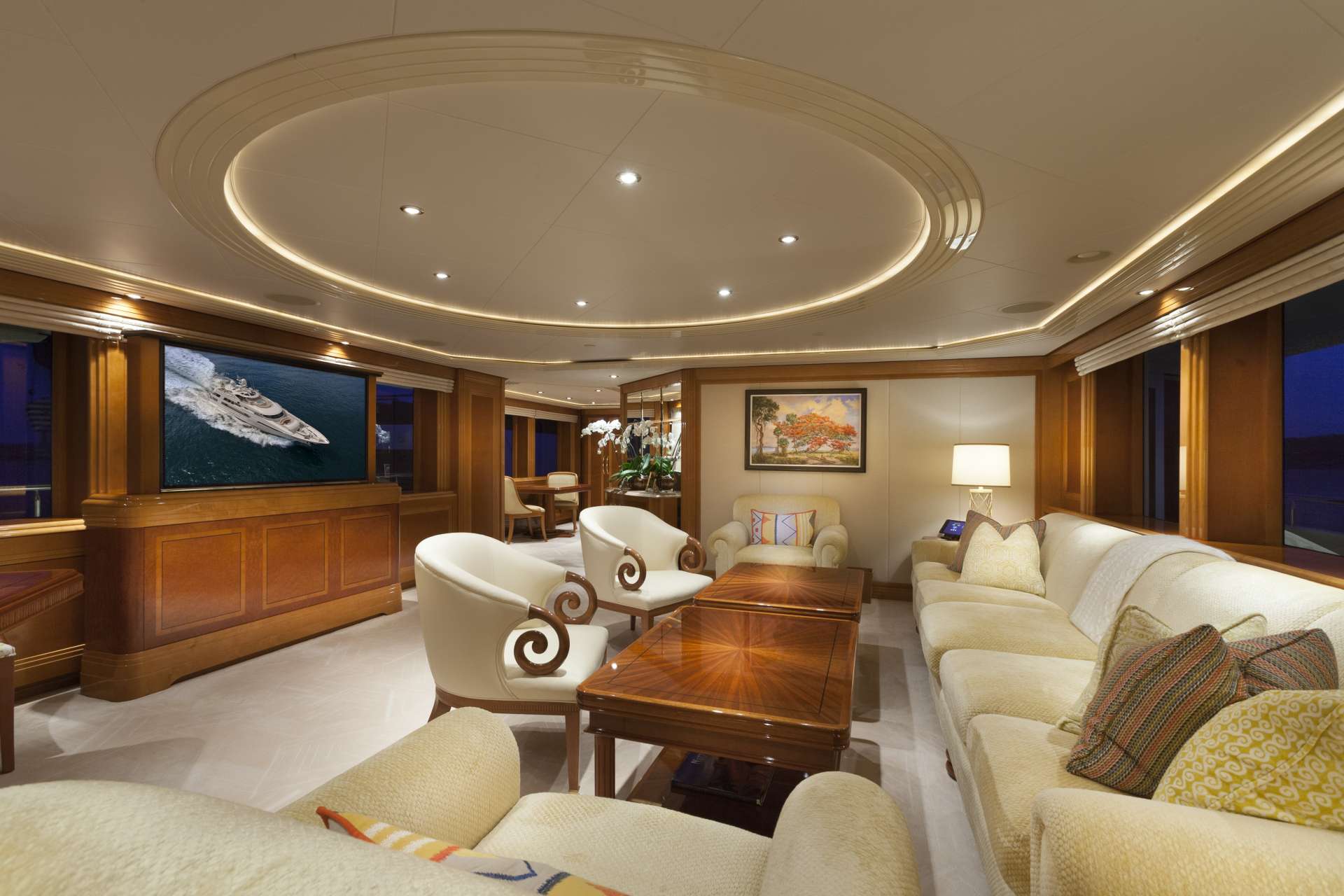 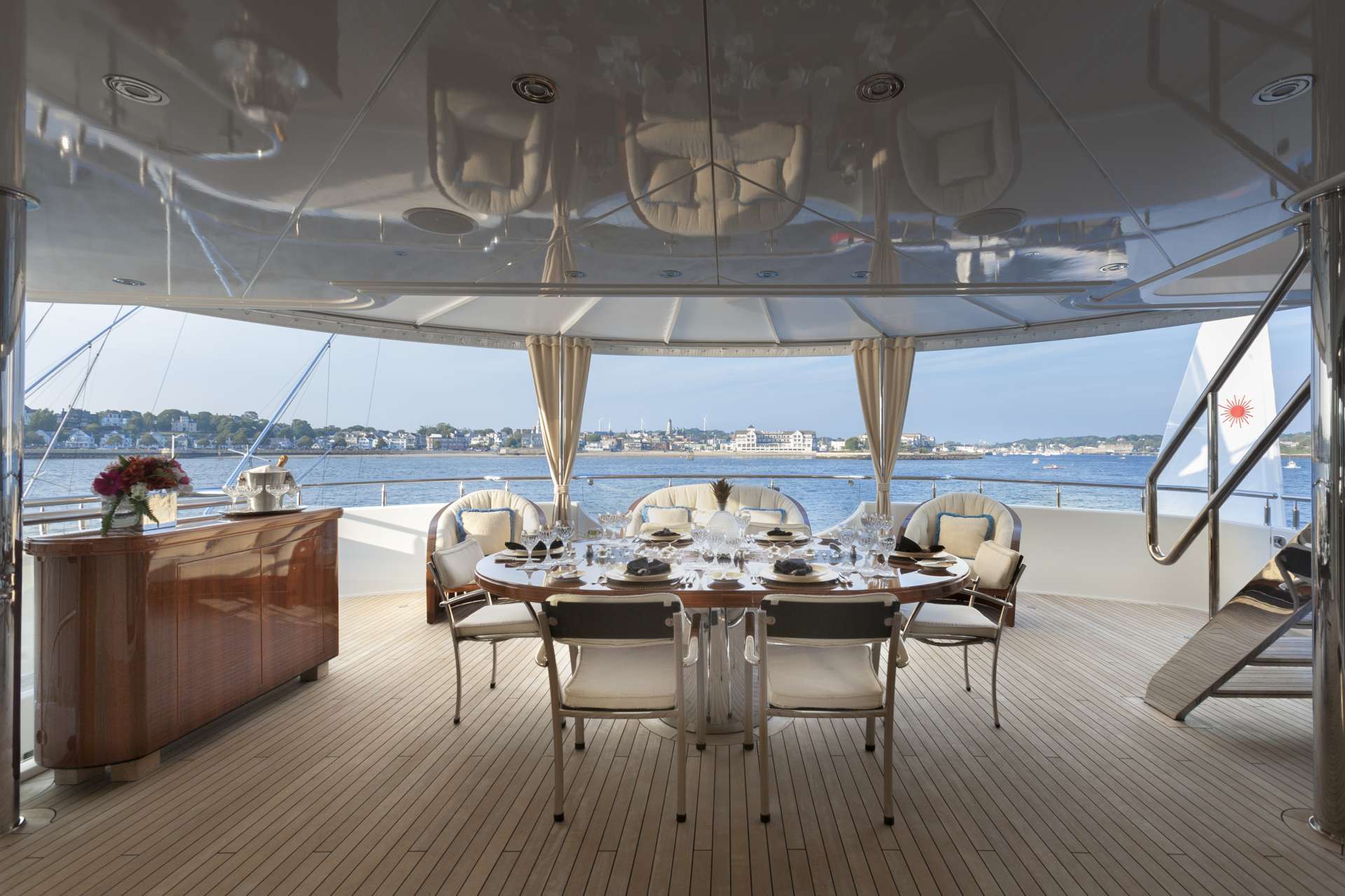 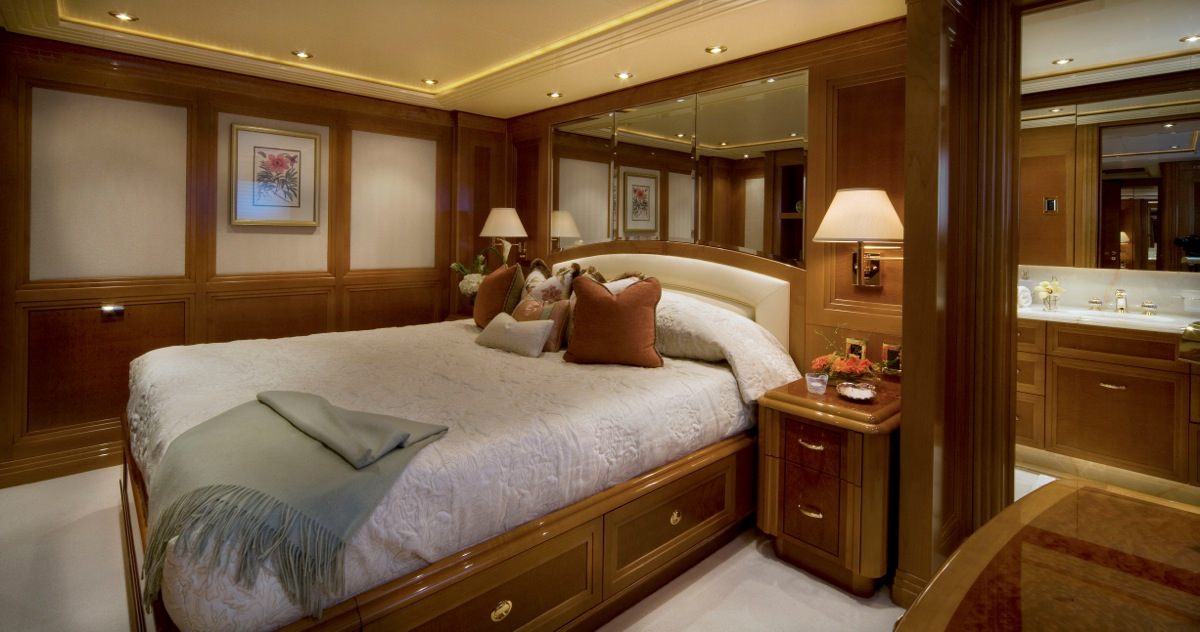 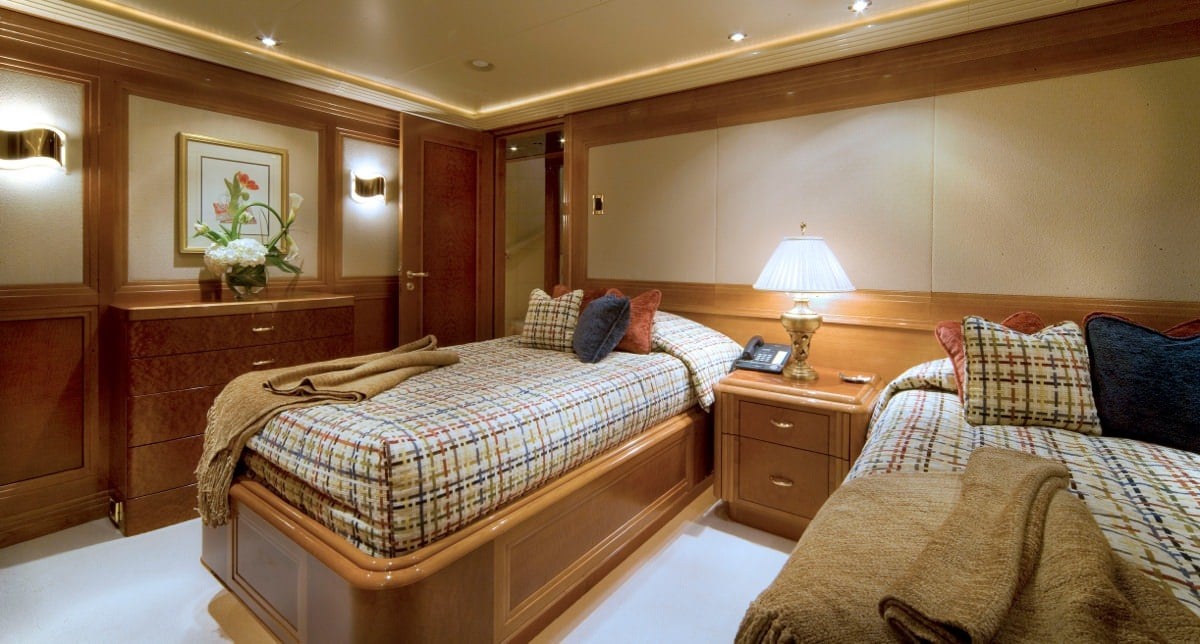 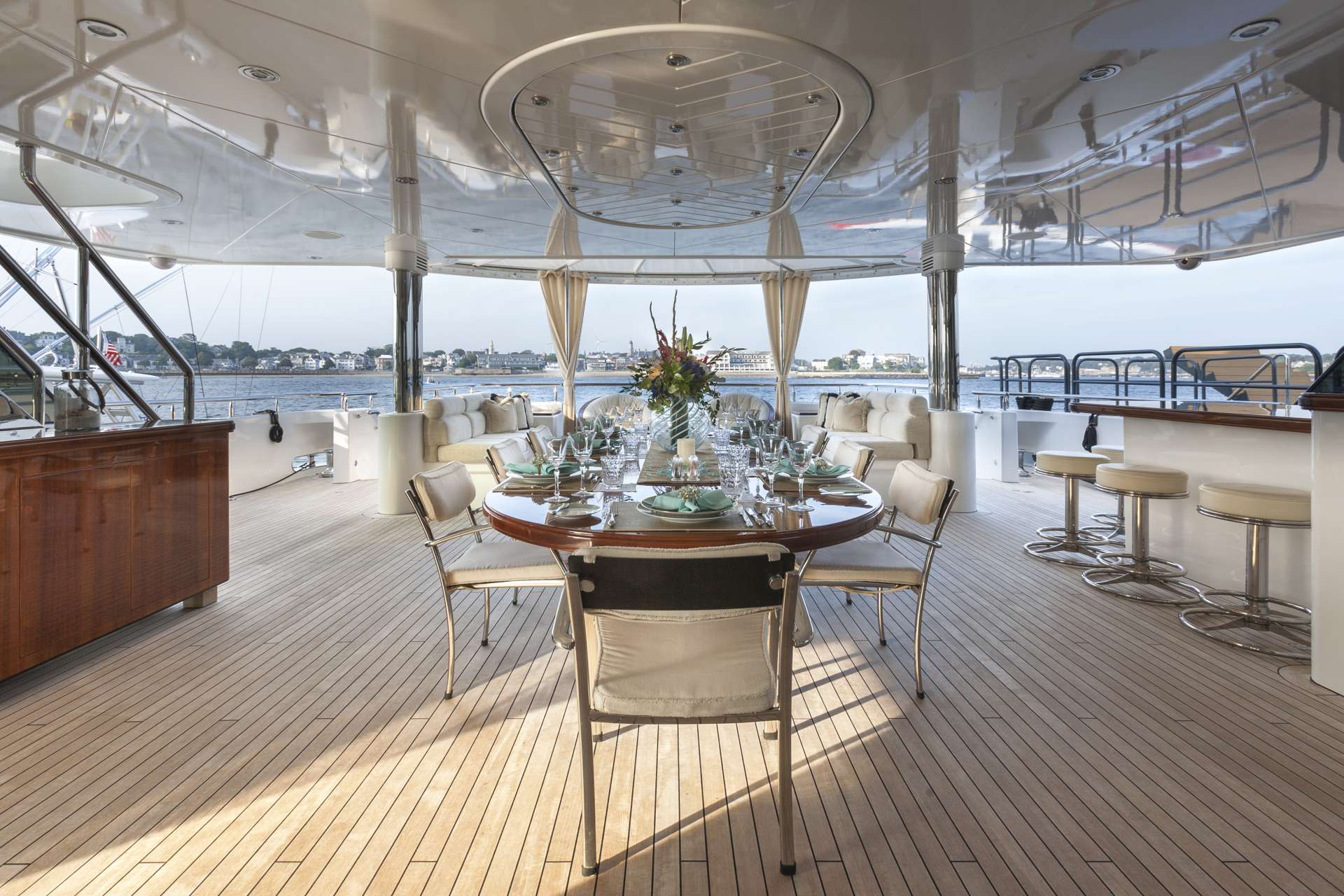 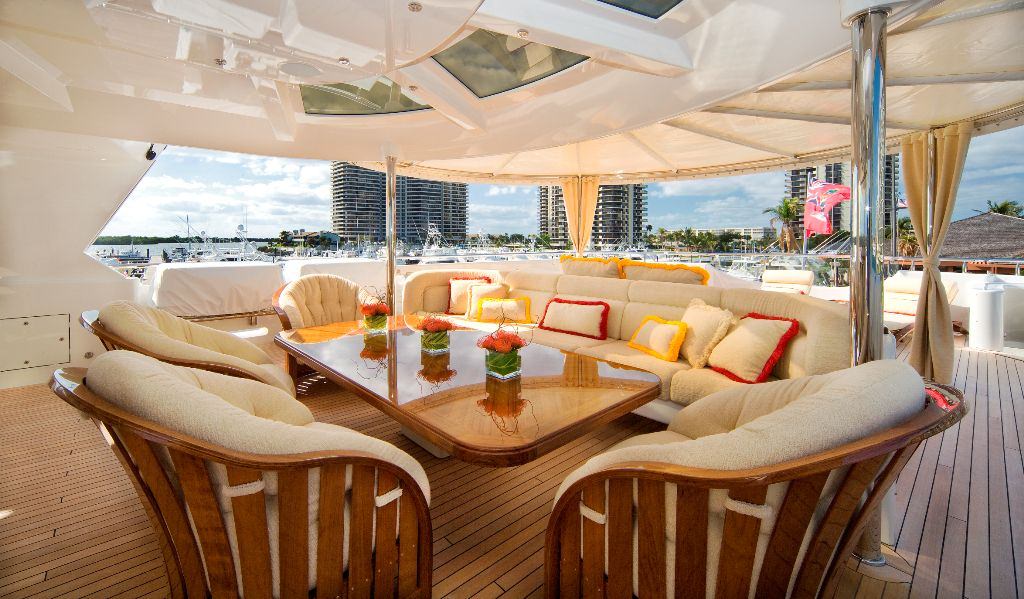 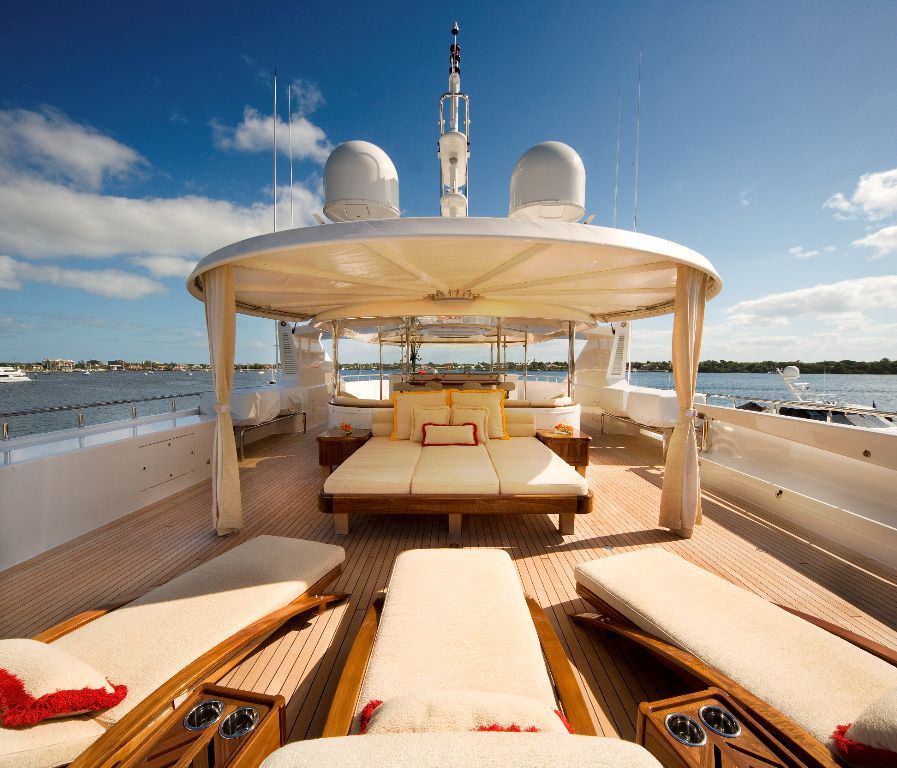 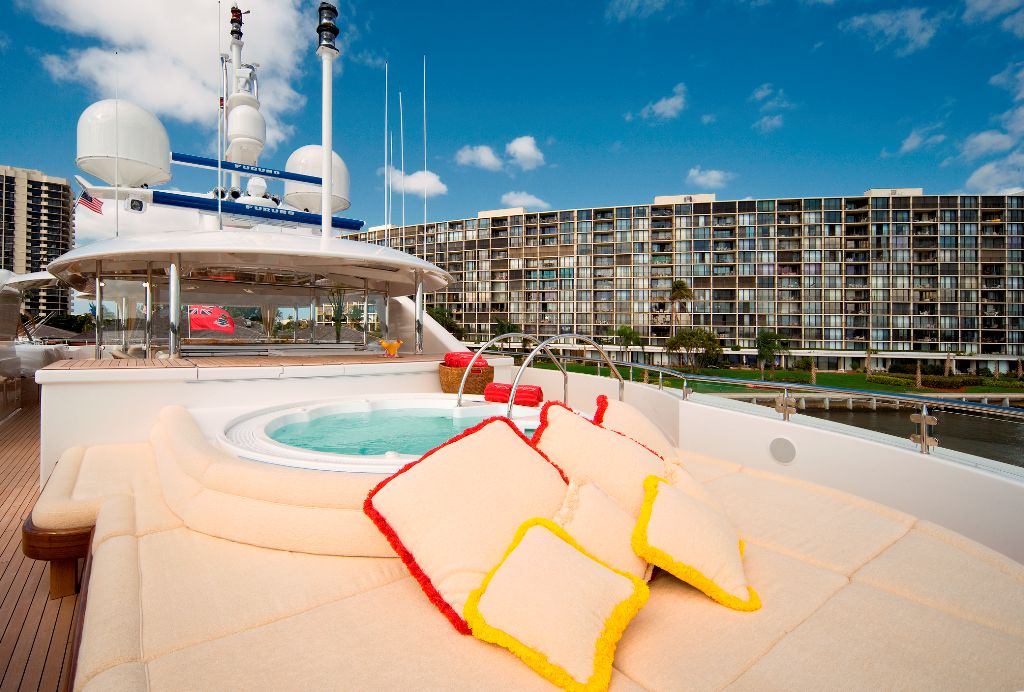 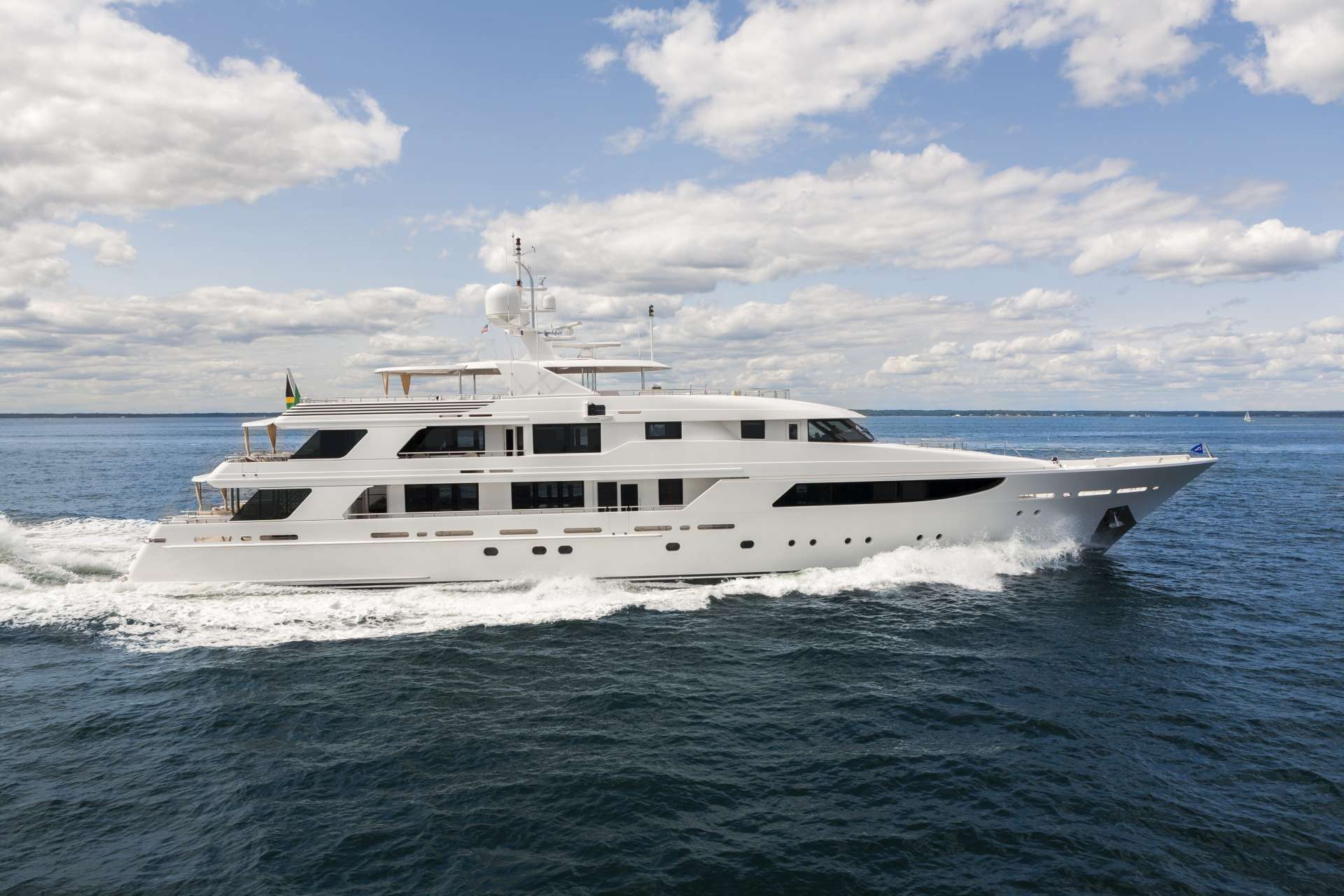 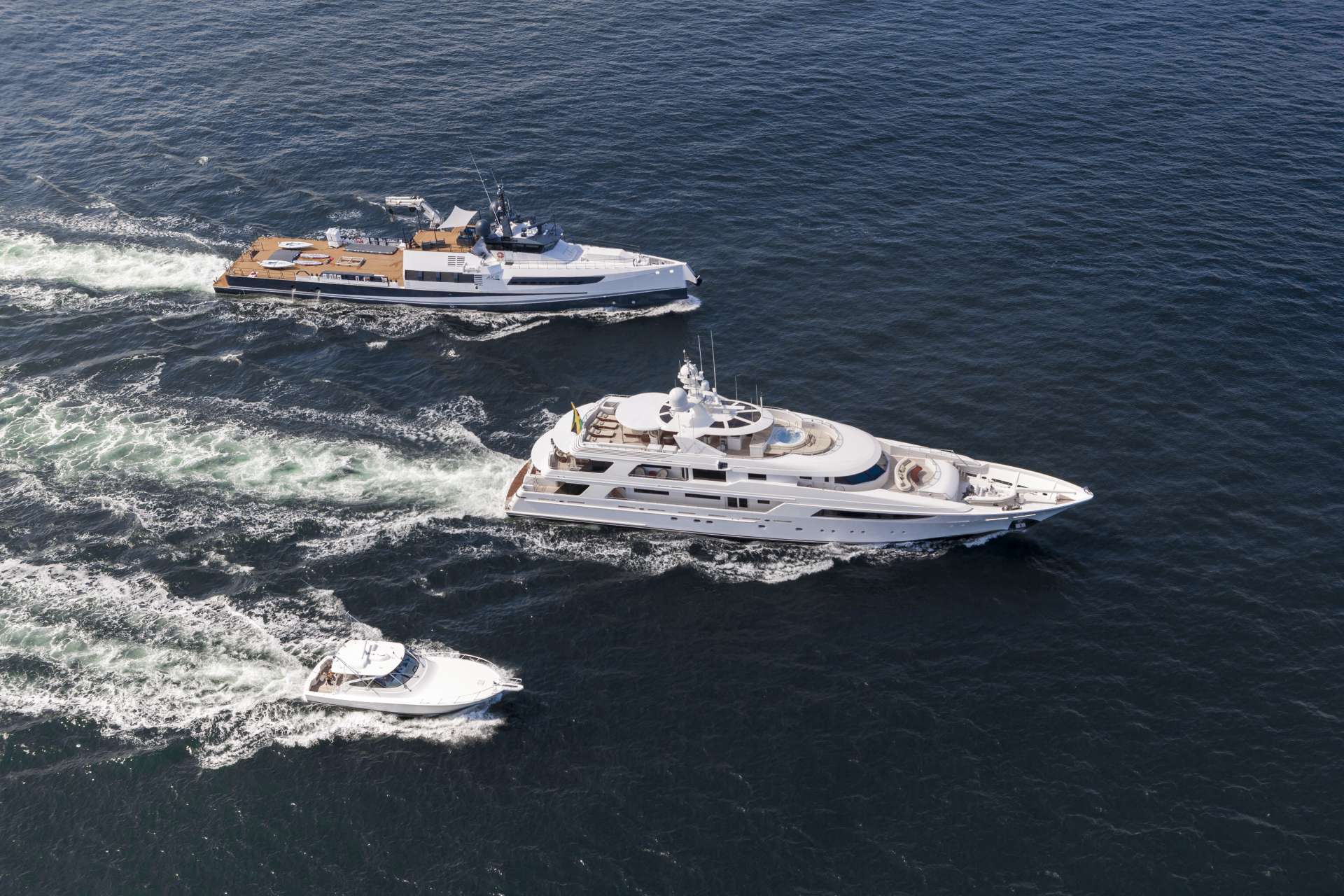 GIGI can accommodate up to twelve guests in six staterooms including an on deck Master suite. The entryway can be partitioned from the main Master stateroom for private use of the Master office. A comfortable lounge to starboard allows for the host(s) to enjoy some privacy from the rest of the group on occasion. The full beam ensuite bathroom features his and her sink vanities, walk-in shower stall and central Jacuzzi tub; all with subtle gold accents against cr�me marble. A unique feature is the elegant bridge VIP suite with a private balcony. Below deck are two king bedded cabins aft, a twin bedded cabin forward to port and a single plus Pullman with spacious layout to starboard.

The Main Salon is comfortable and elegant with an openness into the adjoining formal Dining comfortable for 8 or extended for 12 just as comfortably.

The skylounge offers a comfortable second salon area along with an additional portside balcony perfect for the guests who might wander off for a private location to read or just desire to take in the waterside surroundings in a quiet spot. The vast aft deck area on this level is an excellent choice for the discrete al fresco dining experience or cocktail hour further aft in the seating area. With glass door enclosures along the passageways, even on windy days guests have protection from the elements here. In a moment this area can be converted to a sophisticated and private beach club setting with tie back full length drapery while guests are undisturbed by passers by while dockside. A nightcap at the portside aft bar here allows for a romantic rendezvous or ongoing conversations.

There is a semi-circular booth seat with table, forward of the bridge great for the early bird breakfast at anchor on a calm day or even sundowners before dinner.

Up a level to the Sundeck is where guests will continue to be impressed by the grandeur of this yacht. Inviting hardwood chaise lounges furthest aft, sunpad facing aft with partial shade option overhead, fully covered dining alternative (hydraulic table converts this area to a lounge), full service bar with TV, Jacuzzi furthest forward and a second sunpad area facing forward make for all that guests could need or desire in an outdoor space aboard their yacht. Underway, guests will be able to experience the same comforts as they would at anchor with the curved glass enclosures once again well thought out to protect from the elements.

Captain: Michael Smith
Captain Michael is a born New Zealander and began his maritime career merchant shipping in Cairns Australia before he joined the ranks of the yachting community. Michael has enjoyed many years of yachting beside his wife Stacey who is the Head Chef and Purser on Harmony. Captain Michael has over 25 Years as a Marine Industry Professional and has logged over 400,000 nautical miles Captaining yachts around the world. He enjoys everything about yachting including making sure the guests are having a wonderful experience onboard. Your comfort and safety is Captain Michael’s utmost priority and he looks forward to himself and his team making your trip a wonderful experience on GIGI.

First Officer: Brad Shrives
Brad grew up on the East Coast of South Africa where the ocean was always a part of his life. Brad spent much of his youth interacting with large African wildlife and this is still a passion of his. He came into yachting with his wife, Harmony’s Chief Stewardess Tracey. Brad brings experience, attention to detail and fun to the yacht that helps to create an amazing charter experience on Harmony!

Purser: Stacey Smith
Stacey is originally from Alberta Canada. She joined the yachting industry 14 years ago as a Stewardess, which was when she met her husband Captain Michael. The culinary arts piqued her interest and she attended Dubrulle Culinary Institute in Vancouver Canada in 2004. Stacey has now been cooking full time onboard yachts for 10 years and loves the creative aspect it provides her. Stacey look’s forward to providing you with nourishing, tasteful and beautifully presented meals during your time onboard.

Chief Stewardess: Tracey Shrives
Tracey grew up in a small city on the North Coast of Kwas-zulu in South Africa. Newly married to 1st Mate Bradley Shrives, she enjoys working on the open sea & hospitality the yachting industry has to offer. Tracey has found joy in working hard to make people feel comfortable and at home on the Harmony whilst providing five star service and doing her best to anticipate guests needs no matter how big or small. She looks forward to every trip onboard GIGI and strives to make each the best yet!

Second Stewardess: Magdalena Puzniak
Stewardess Magdalena (Maggi) was born in Poland. She lived in Monaco for 3 years learning French and 1 year in Southhampton England attending the prestigious Warsash Maritime Academy. During her time in the UK she participated in sailing races and worked as an interior yacht stylist. Maggi loves photography, design, running, Pilates, traveling and the sea. Maggi looks forward to her adventures onboard GIGI and working hard to making your stay most memorable.

Deckhand: Richard Cliffe
Richard, Rich or Richie is originally from Auckland New Zealand and is the youngest of his five siblings. He has a strong love for traveling and being around the ocean which makes his yachting career choice the perfect match. His hobbies are spearfishing, diving, wakeboarding, surfing, snowboarding and Asian cooking. His dream for the future is to run a fishing and surf resort whilst yachting for the rest of the year and he looks forward to working hard to making your GIGI trip a very special experience.