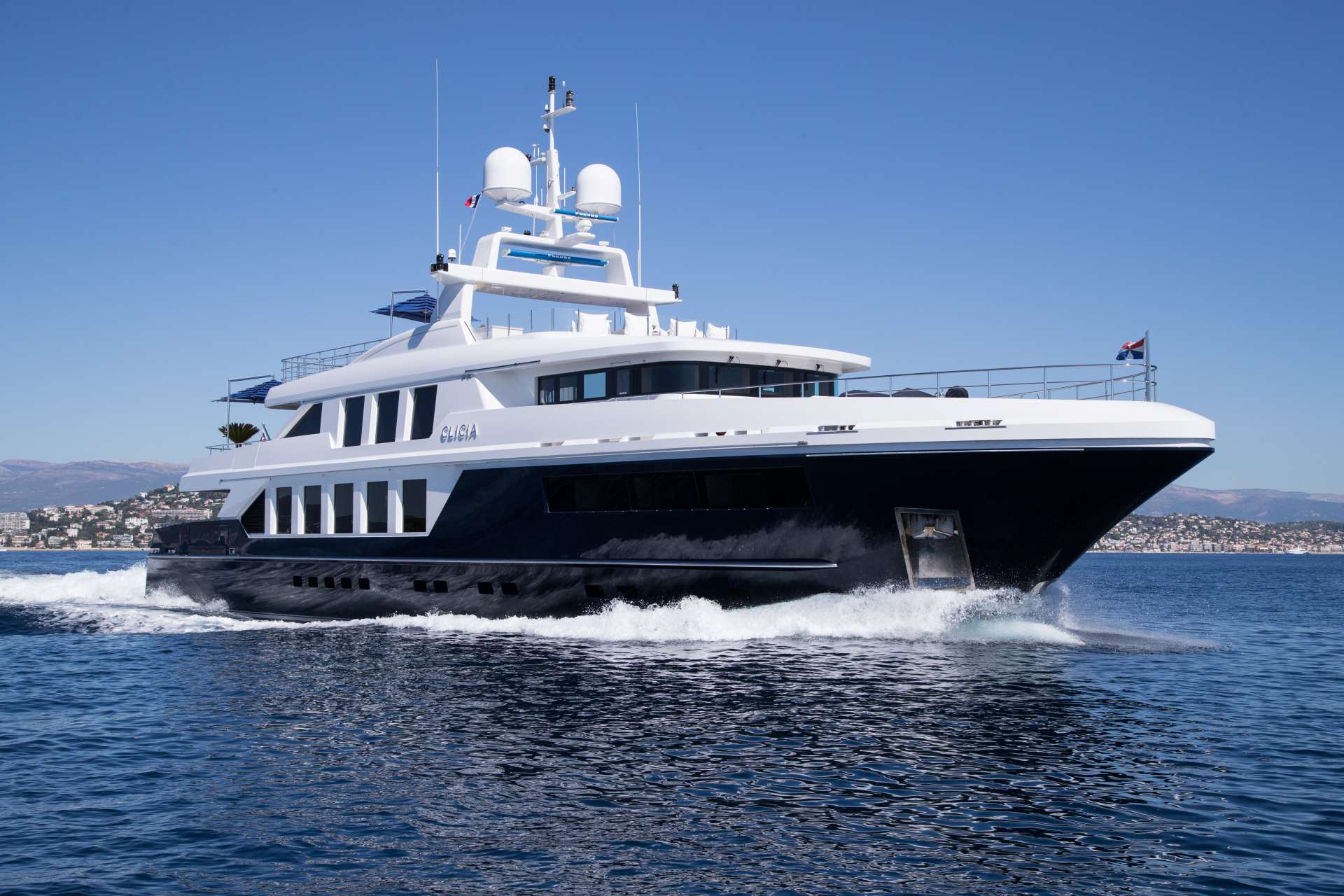 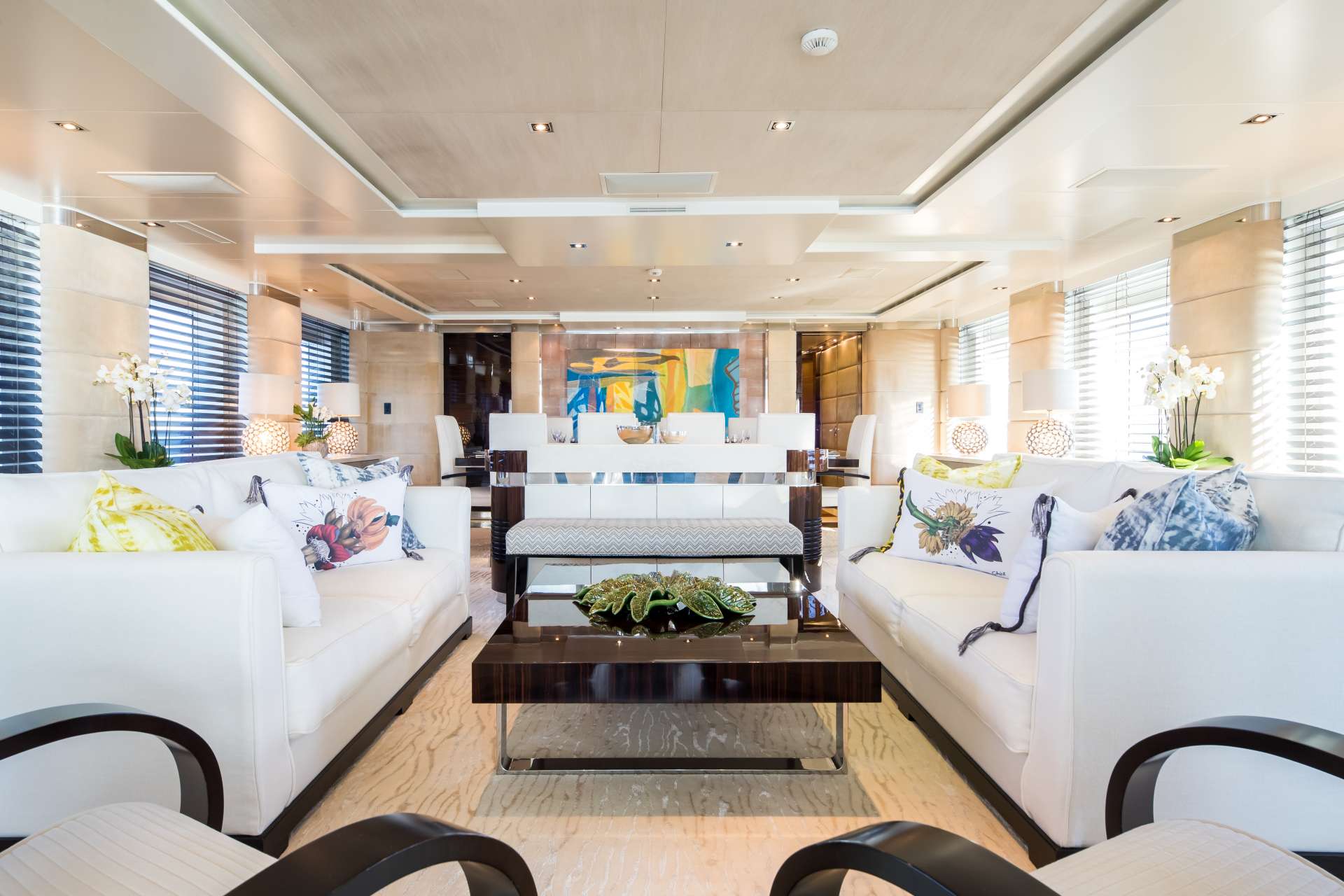 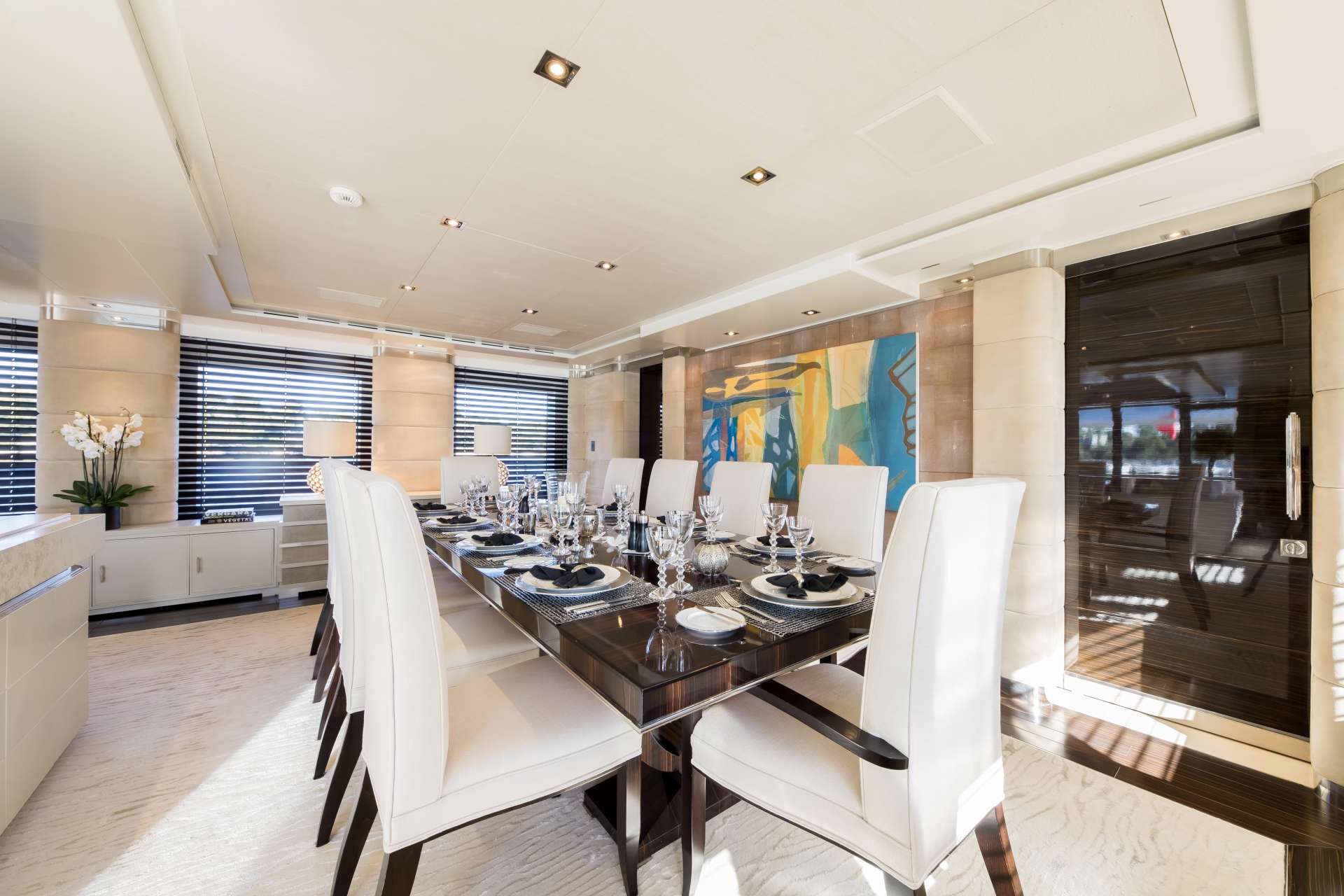 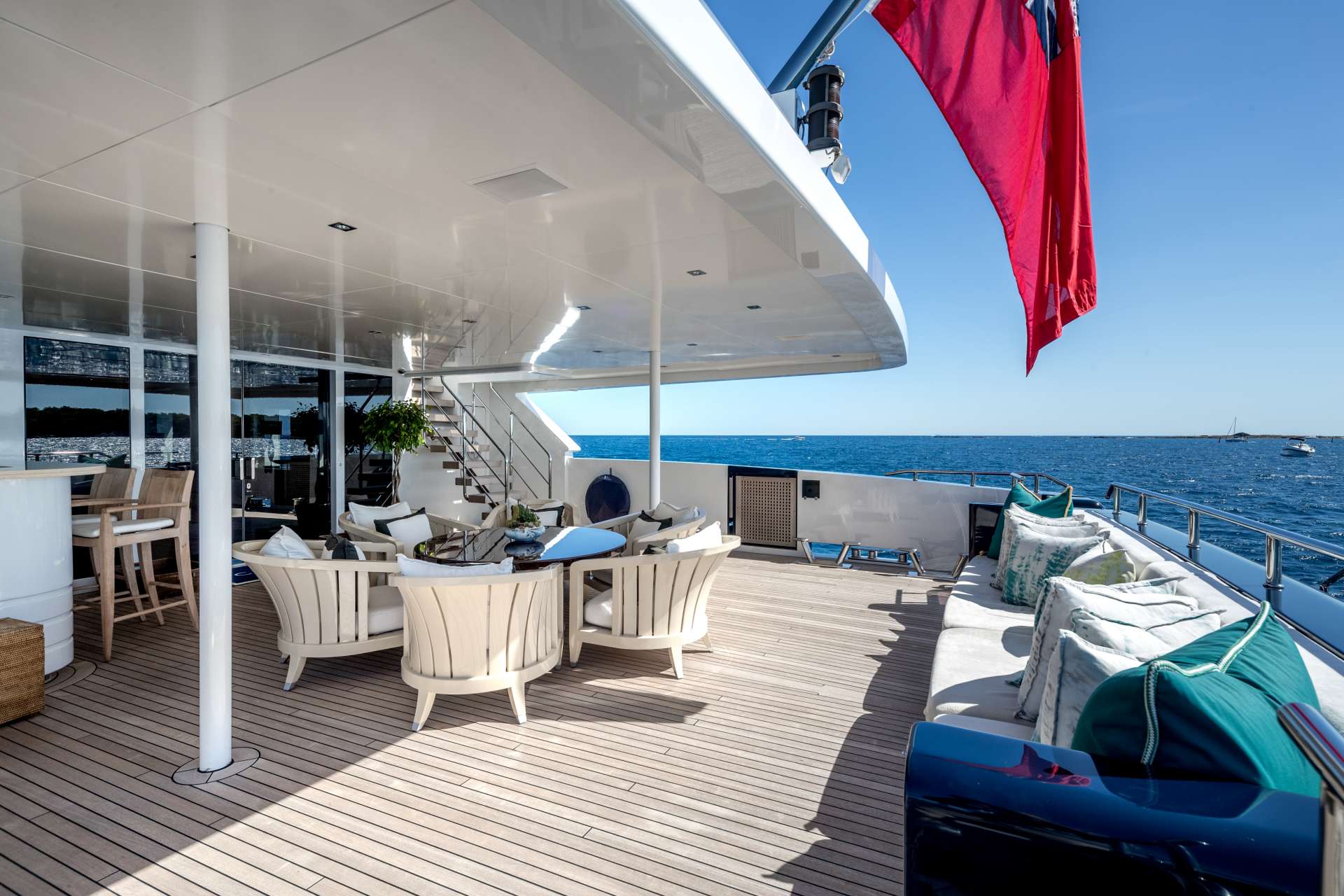 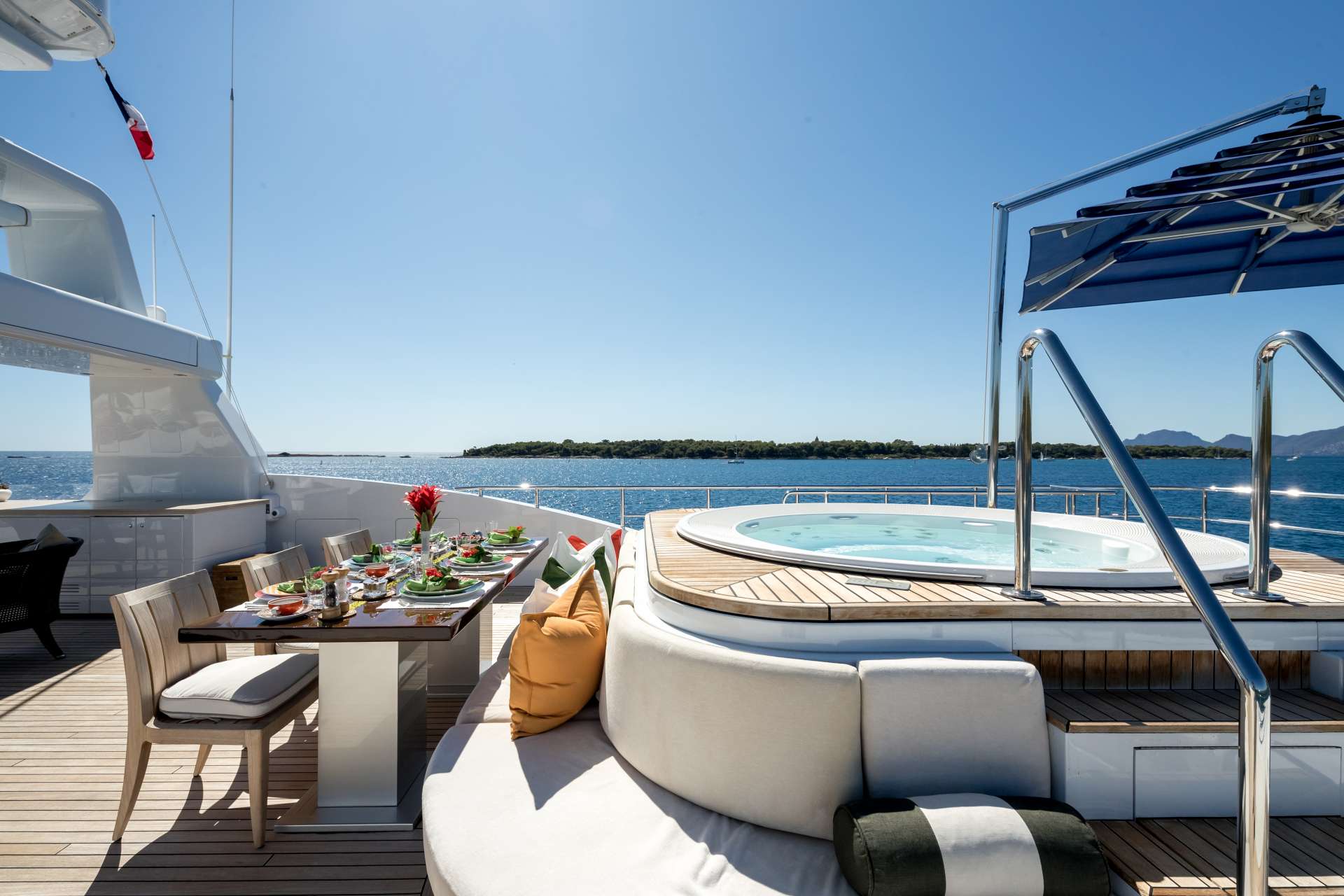 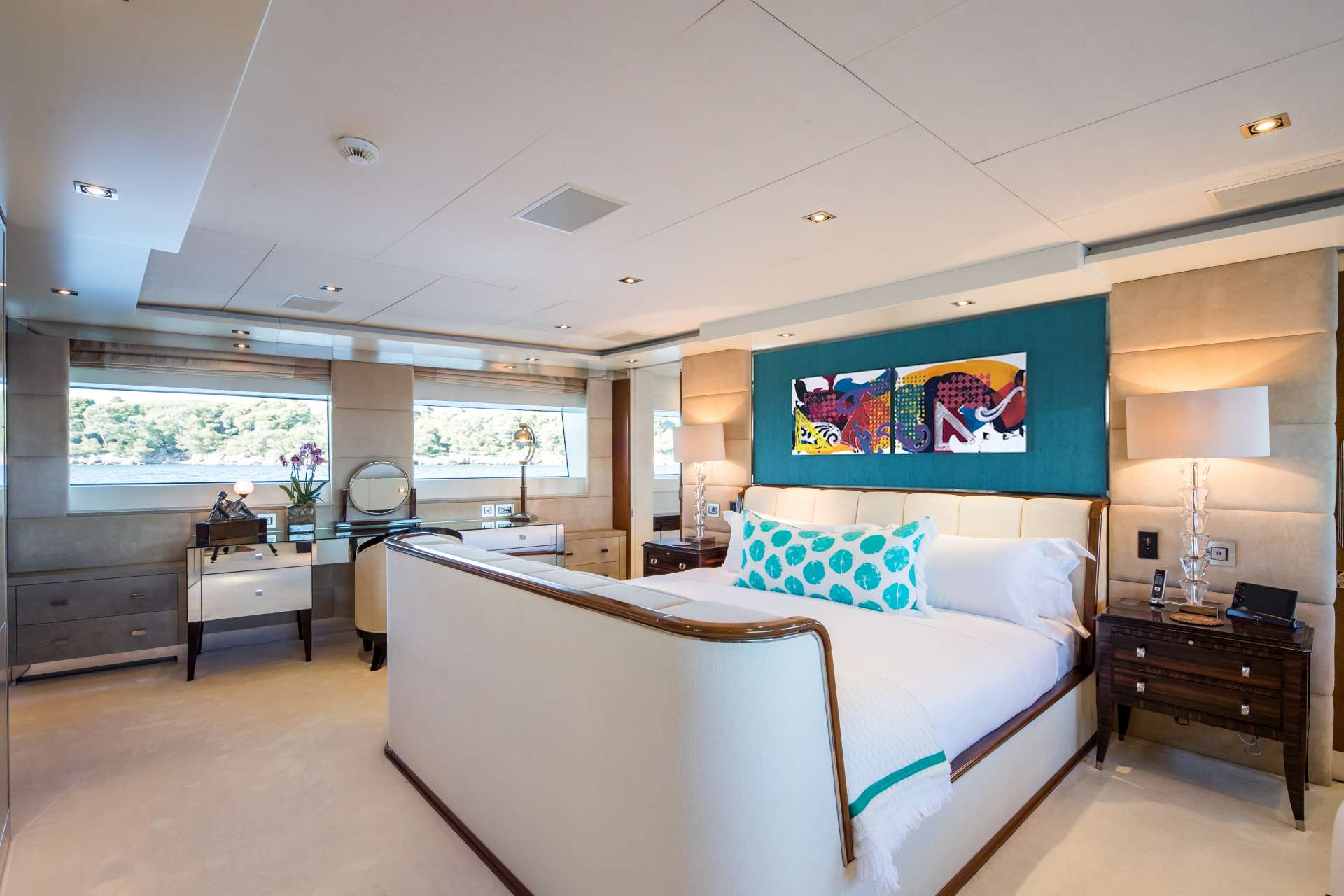 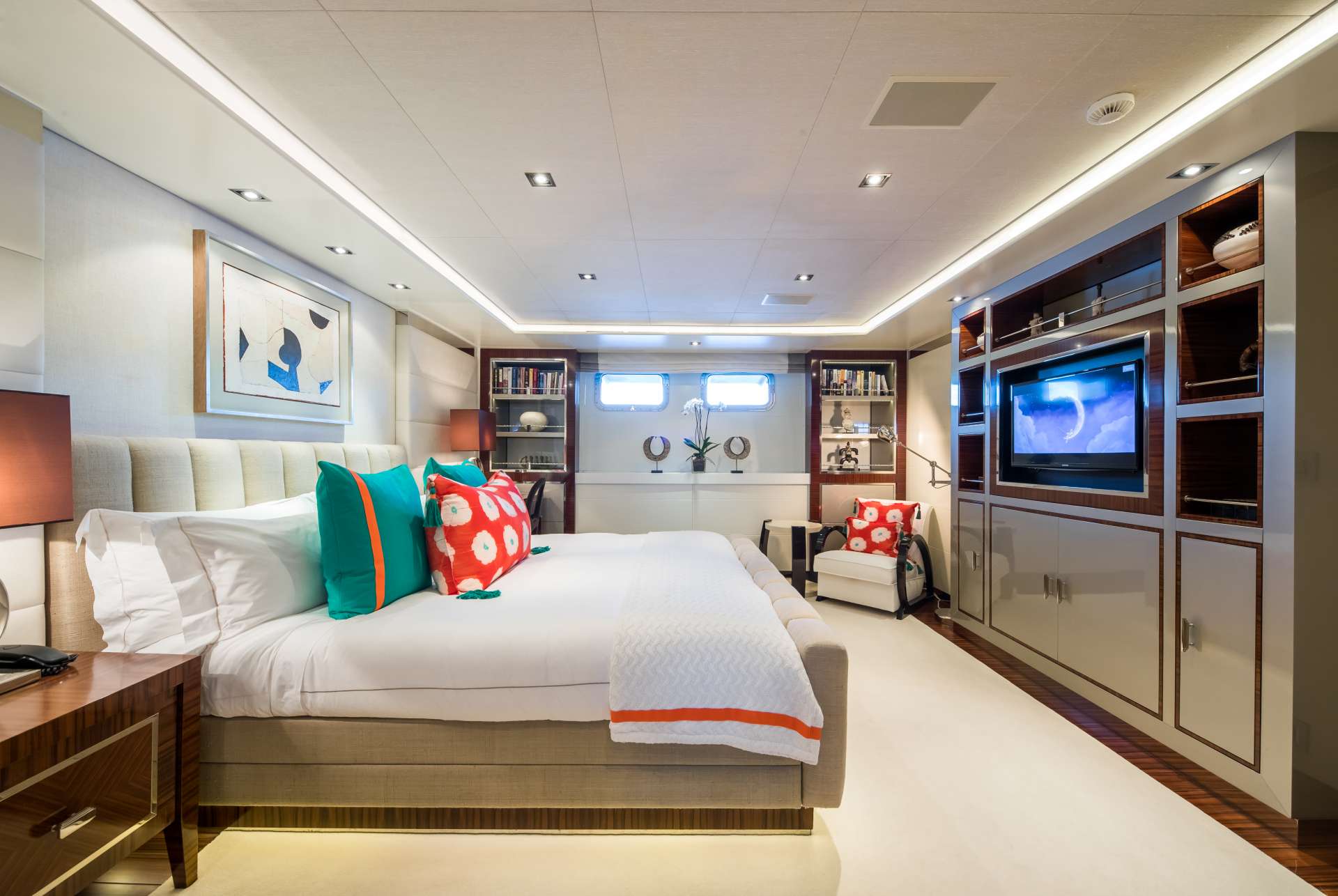 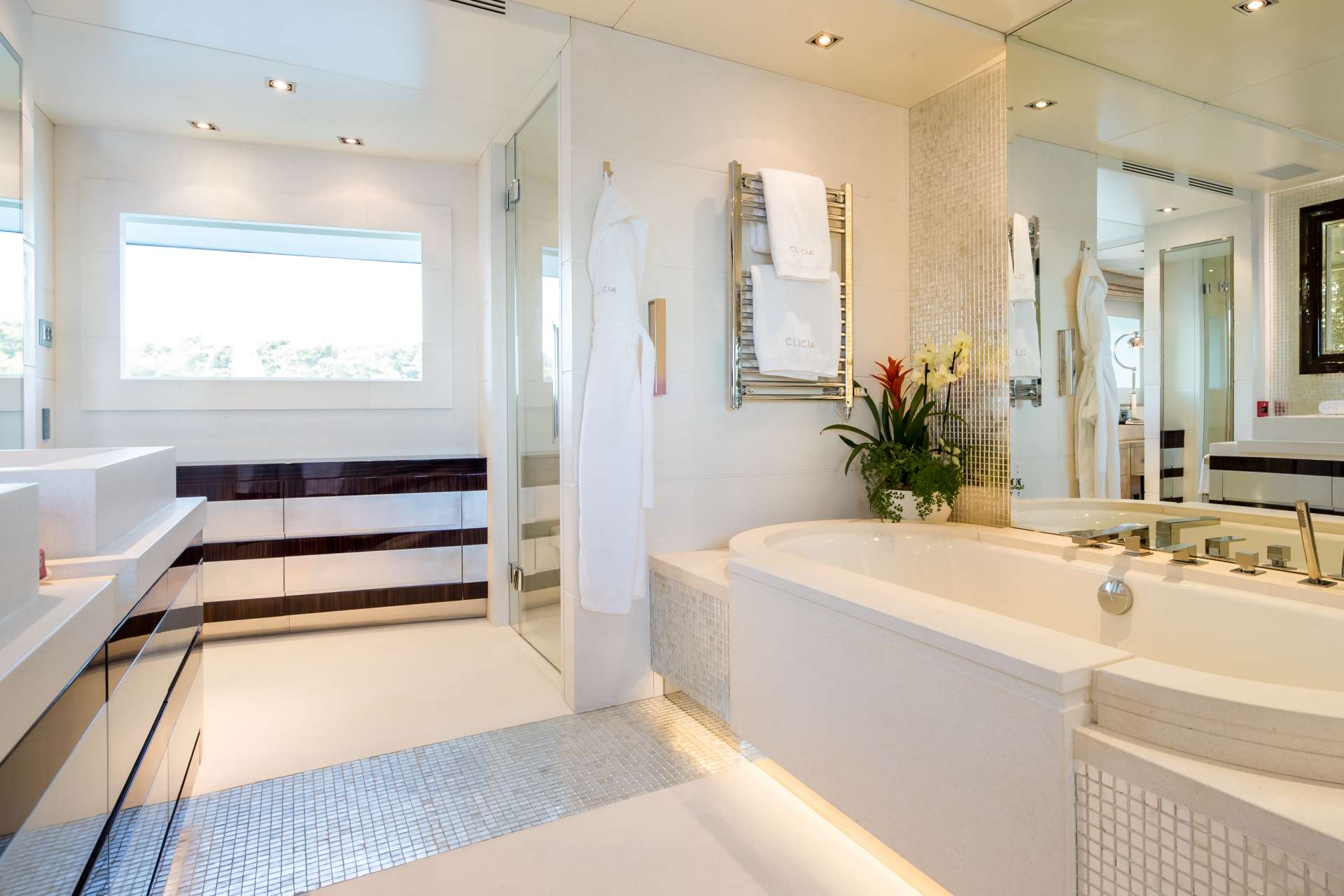 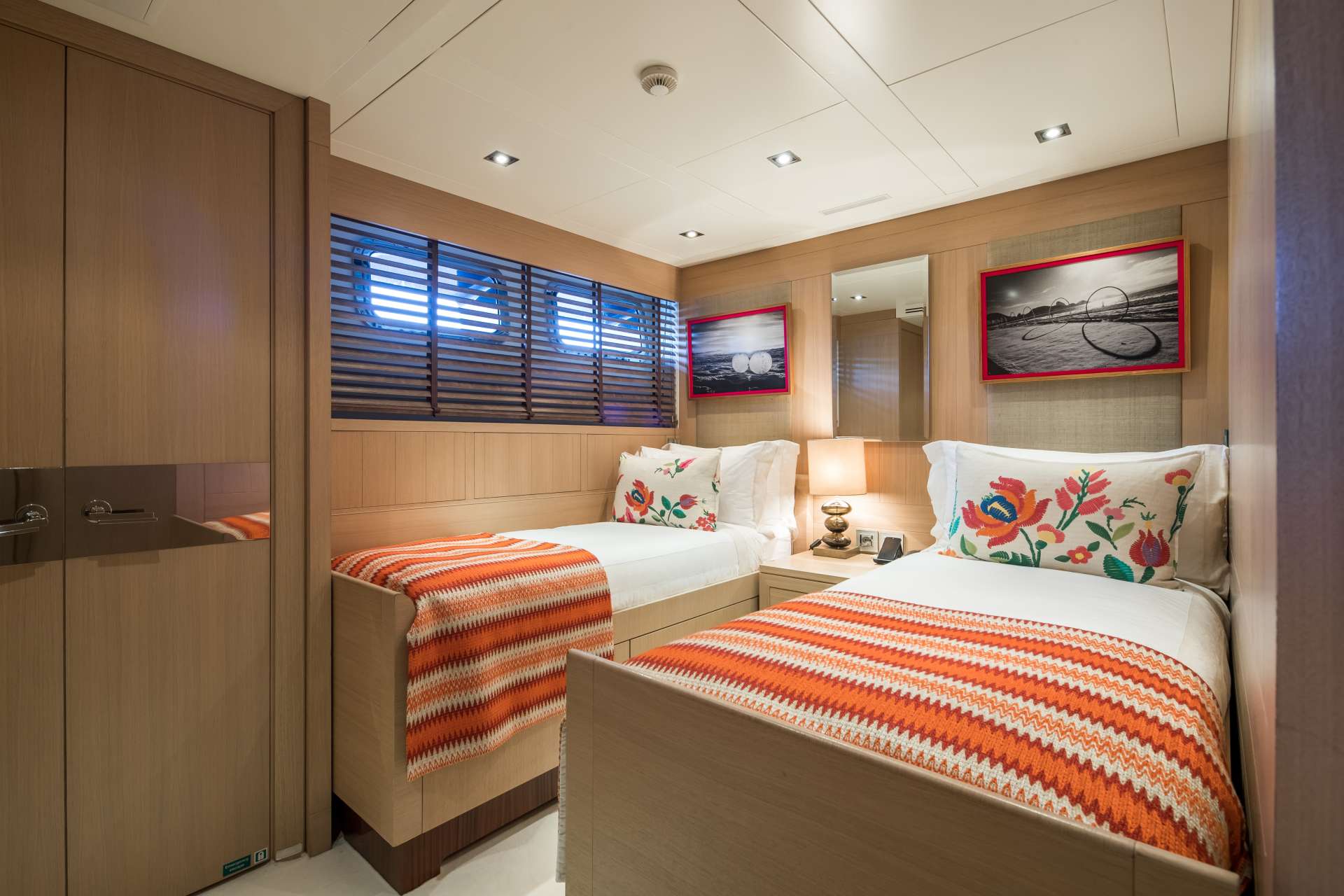 Other Entertainment: Gymnasium on the upper deck:
• Treadmill, fitness bike (can be moved outside), weights and yoga ball
• Television, iPod docking station

CAPTAIN: David Burke – Irish
Joined Spring 2019
Captain David is a highly experienced charter Captain with over 20 years in yachting.
Born and raised on the rugged Atlantic coast of Ireland, David has long nurtured a passion for the sea and began his yachting career at the age of 20 while still at University.
Over the years he has moved up through the ranks and in 2006 he joined the 52m M/Y Sea Jewel as first mate and then came a promotion to Captain where he spent the next 9 years. He then took command of the very busy and successful charter yacht WILD THYME which under his command became AURA, he completed 4 successful seasons of back to back charters with a lot of repeat clients.
David has extensive experience of the Mediterranean, and when not onboard he enjoys spending time with his two children.
Previous Yachts: M/Y Aura (37m), M/Y Sea Jewel (52m), M/Y Sweet Doll (46m), M/Y Thunder B (48m)
Languages: English, basic French

FIRST MATE: Angharad Waldron (Harry) – British
Joined Spring 2019
Harry grew up in the Cornish seaside town of Fowey on the South Coast. She spent her summers sailing and playing around on the water before sailing in the National “GB” team in her teens. Joining the yachting industry in 2011 was a natural progression.
Harry enjoys the outdoors and making the most of her South of France home, she has a passion for cycling, sailing and hiking.
Previous Yachts: M/Y Giorgia (37m)
Languages: English

CHIEF STEWARDESS: Charlotte Miller – British – Rotational
Joined
With a strong hospitality background and a passion for design Charlotte has managed to combine these elements onboard luxury yachts.
Charlotte’s aim is to provide a warm and welcoming atmosphere for her guests onboard, where her calm demeanour and sharp eye for detail ensures an unforgettable experience.
When Charlotte has any down time she enjoys getting stuck into her house renovations and being surrounded by family and friends.
Languages: English

CHIEF STEWARDESS: Jodie Williams – Scottish – Rotational
Joined Spring 2019
Jodie’s love of being on the water began at a young age when her grandfather bought a sailing boat and from then she spent most weekends onboard.
Her love of travel began in 2003 when she left Scotland to explore the world, she has travelled extensively through more than 40 countries over land or by sea. Jodie began her career in high-end hospitality working in 5* hotels and luxury spa’s which took her to Australia, and after 10 years she returned to Europe where she embarked on a career in yachting.
Languages: English

JUNIOR STEWARDESS: Paige Smith – British
Joined Autumn 2019
Paige joined the yachting industry this Summer on M/Y Blue Albacor. She takes after her father by being a perfectionist and meticulously organised which she felt were positive traits for this industry. Prior to yachting Paige worked as a nanny and in a high-end restaurant in the French Alps.
When Paige has any down time she enjoys travelling and learning about different cultures, photography and water sports.
Languages: English

CHIEF ENGINEER: Hartmut John – German
Joined
Hartmut left the German Air-Force in 2000 after serving 12 years as an aircraft maintenance chief mechanic. He then set his sights and focused on the yachting industry.
As an engineer Hartmut has been involved in the supervision and management of yacht refits and new constructions, despite his long service in the industry, his joy and motivation remain unbroken he is always focused on running the yacht safe and successfully.
In his spare time Hartmut likes to go cycling, scuba diving and loves a good read.
Previous Yachts:
Languages: German, English

DECKHAND: Luke Harris – British
Joined Autumn 2019
Luke was land based for 4 years employed in client facing roles but the felt he wanted to go into the yachting industry and be part of a team. The 2019 season he was onboard M/Y Rahil. Luke is a very sport associated person and enjoys taking part in all team games, he enjoys football he’s also an accomplished alpine skier.
Previous Yachts: M/Y Rahil (54m)
Languages: English