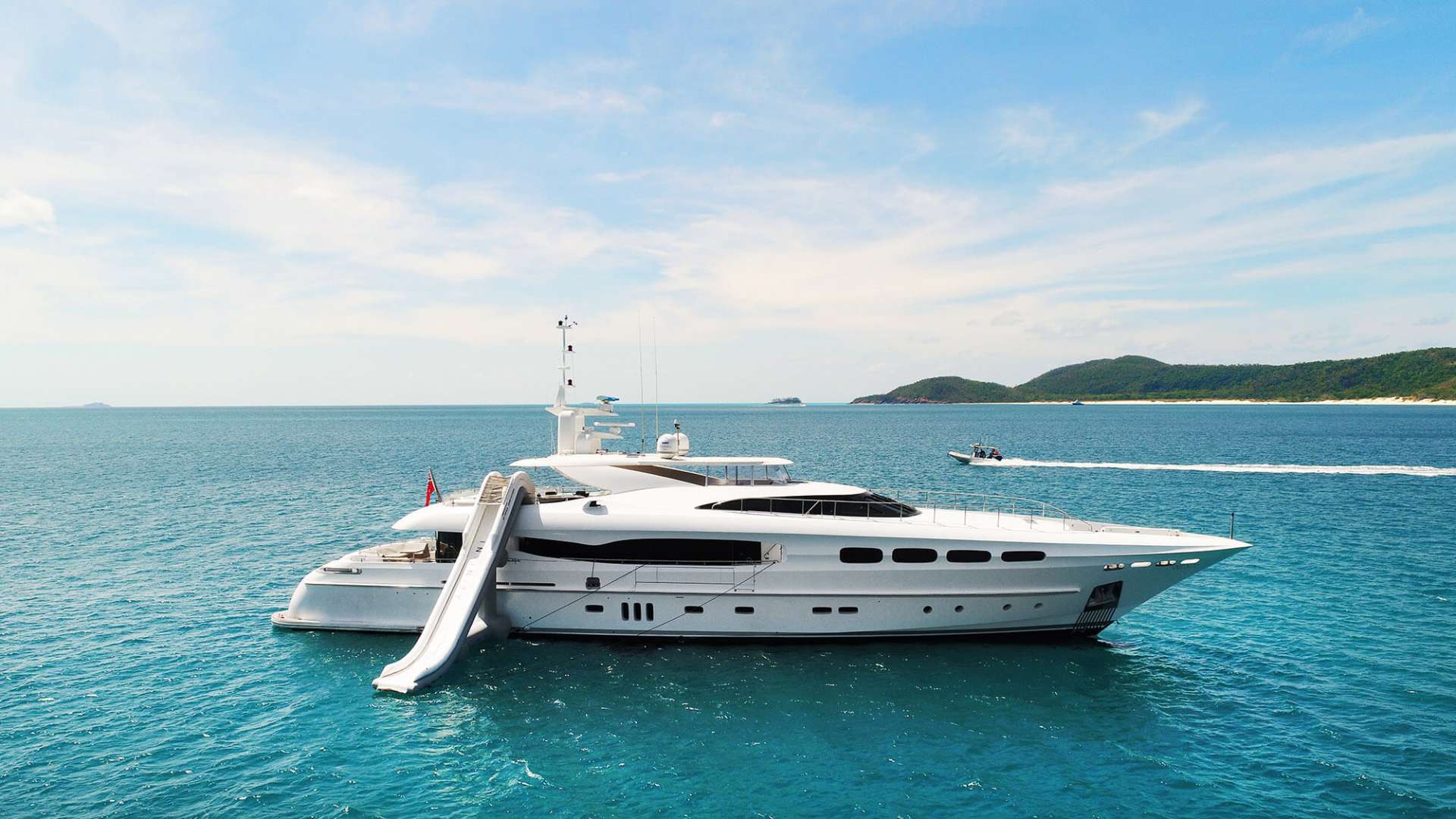 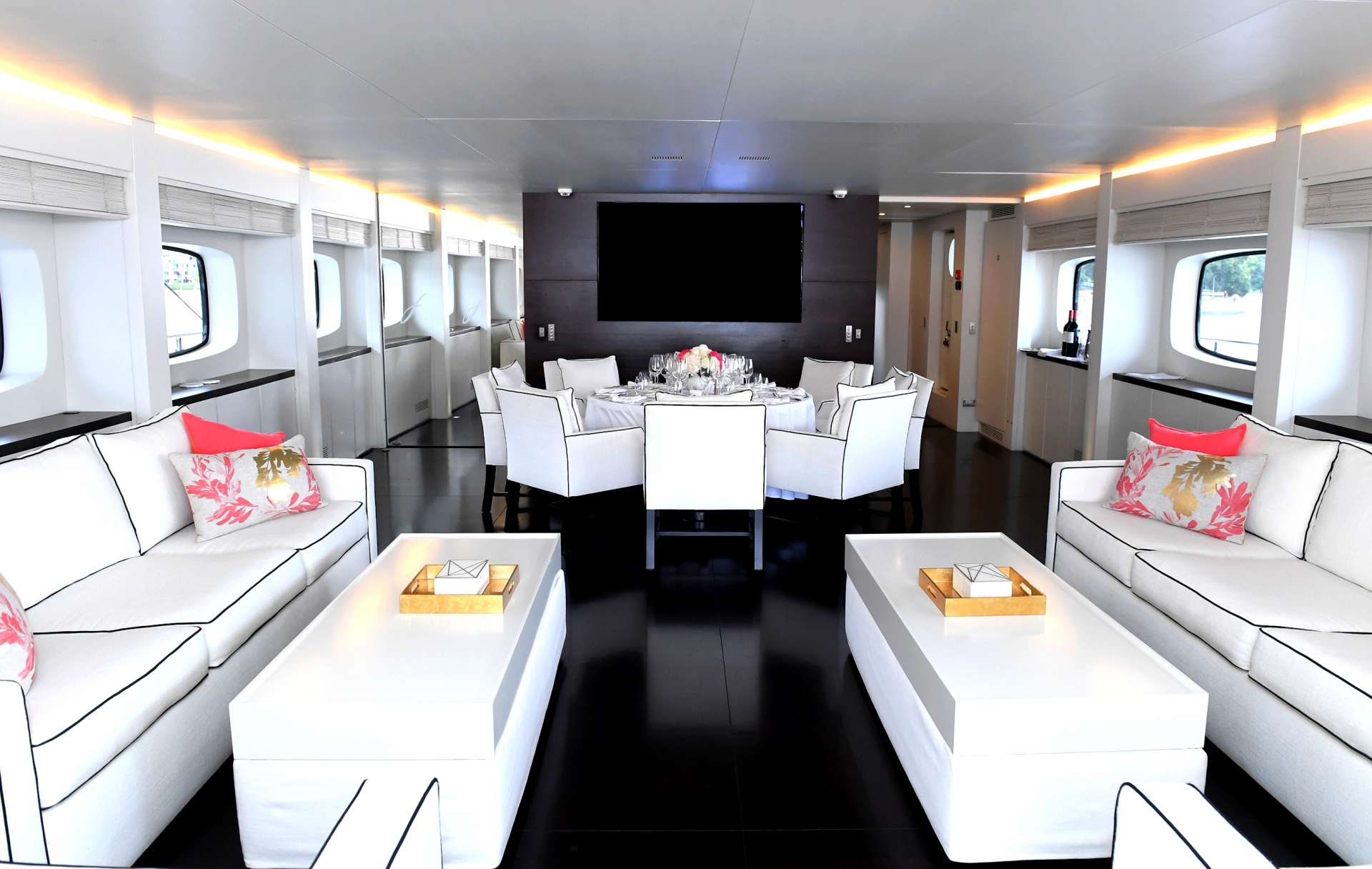 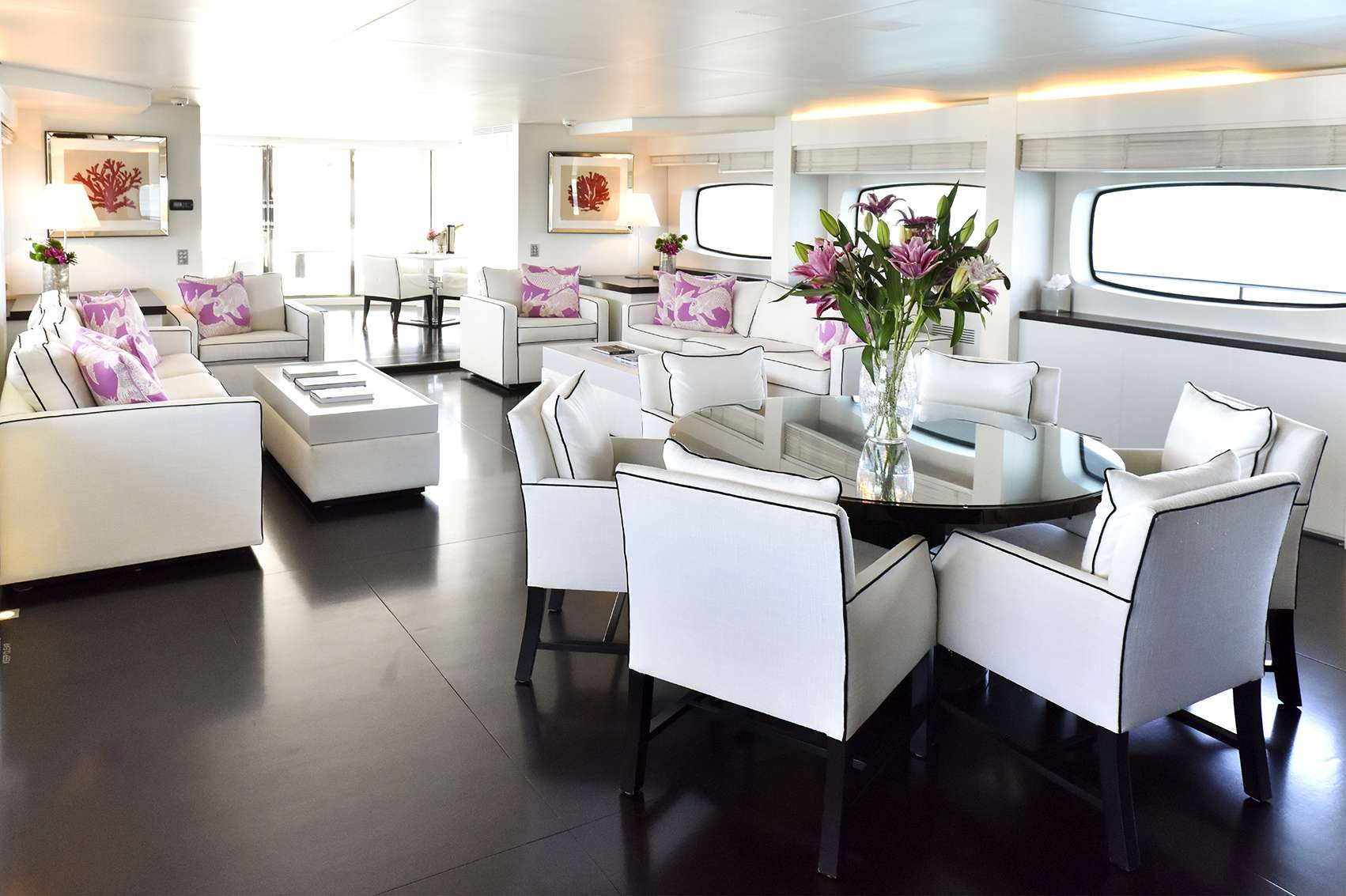 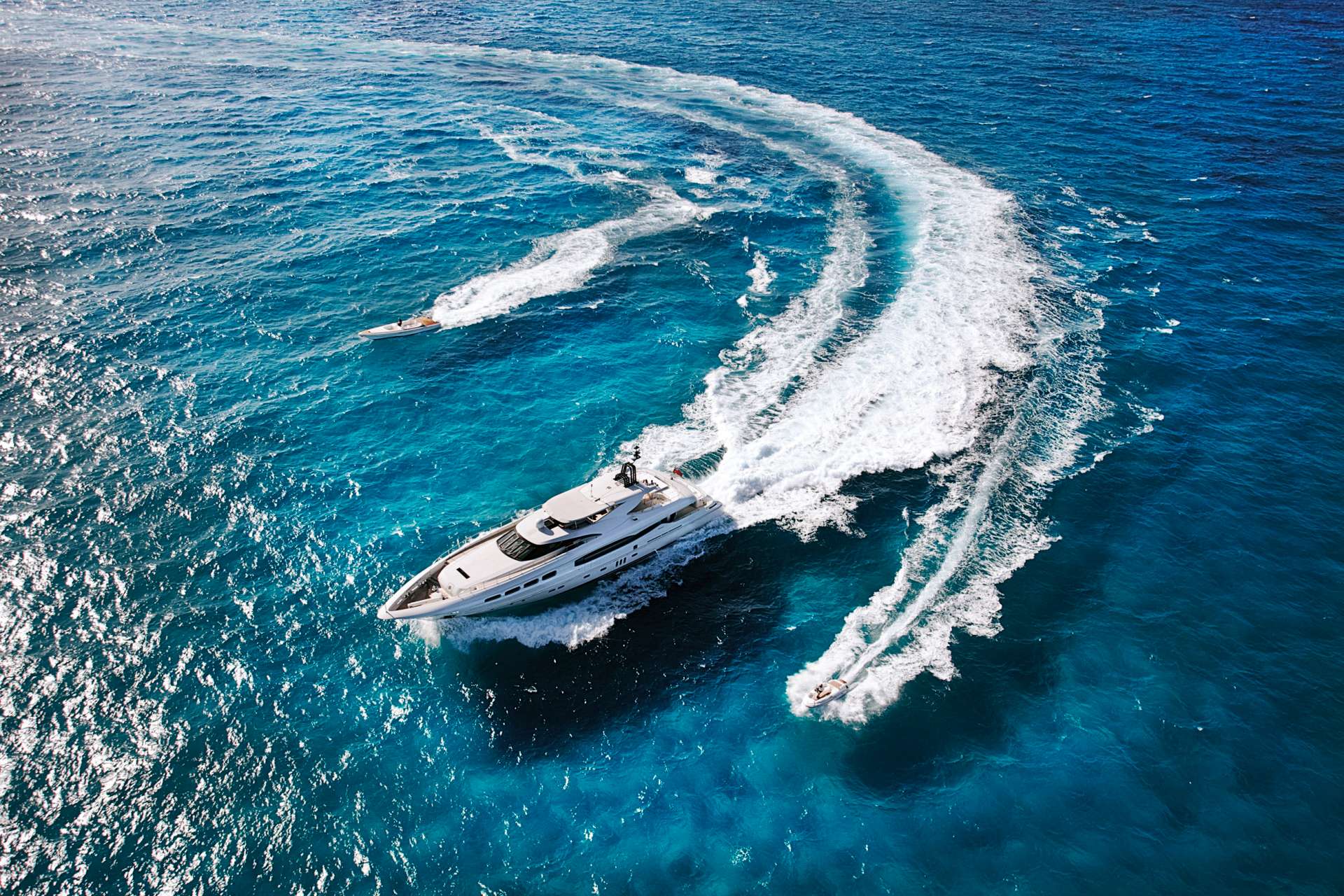 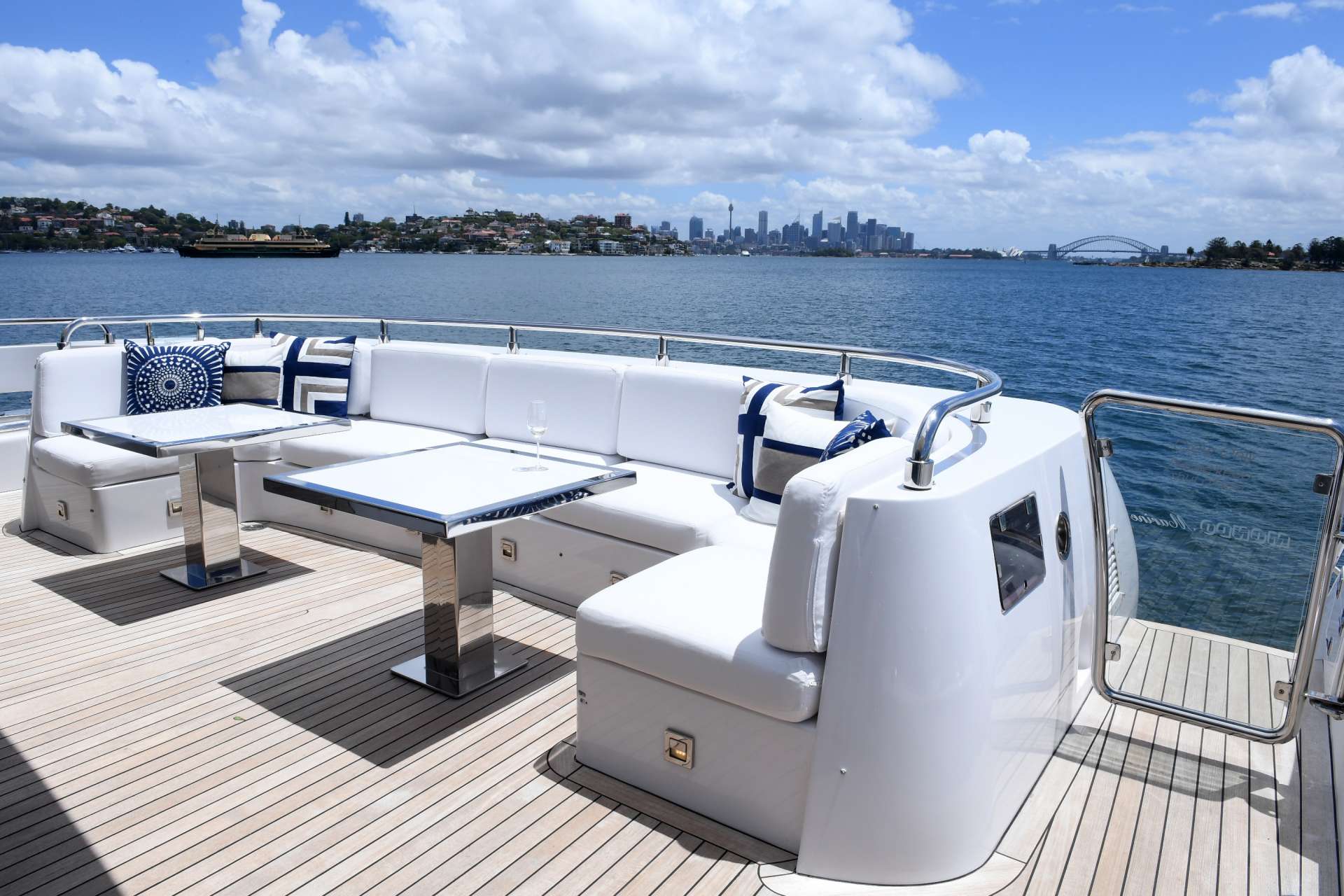 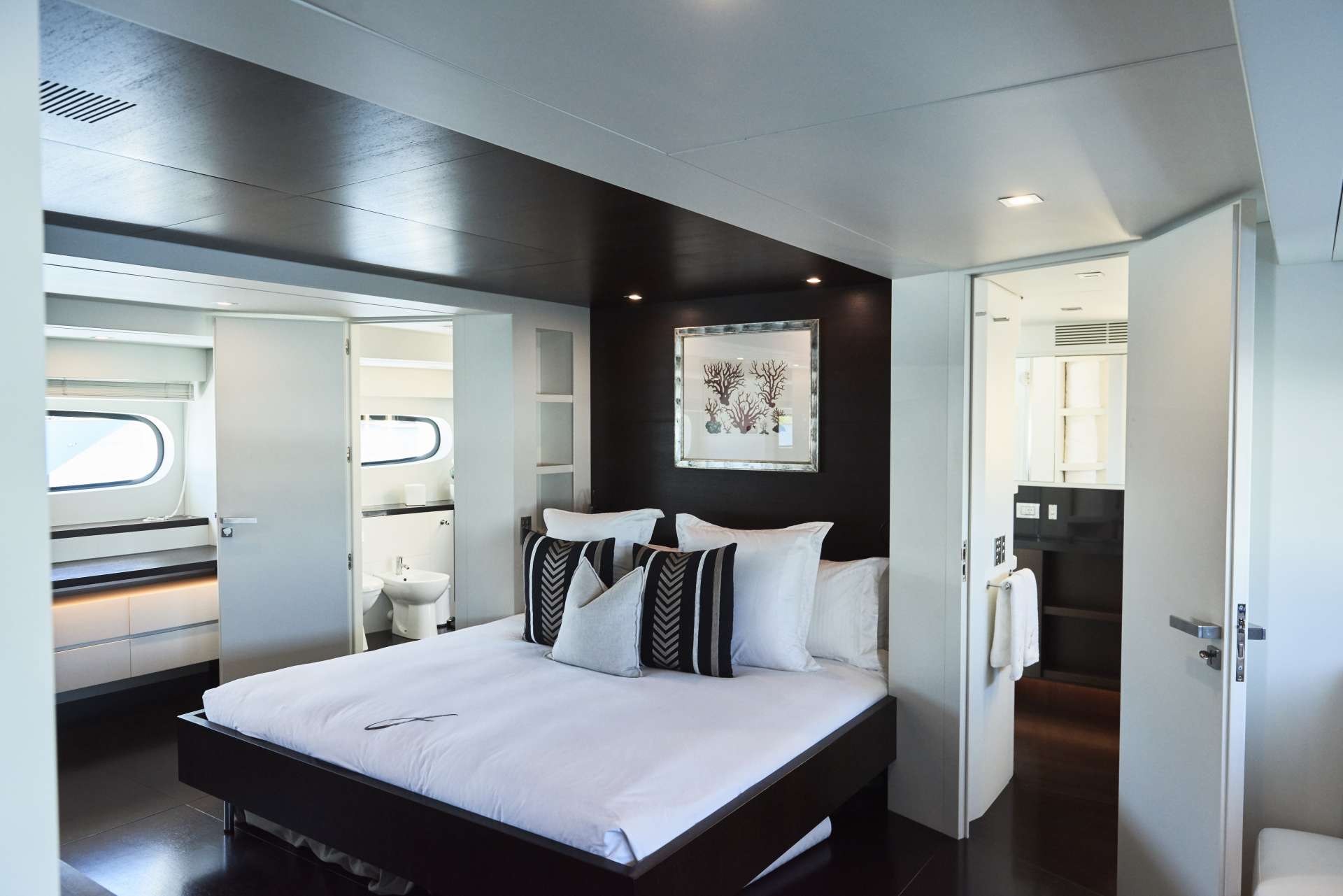 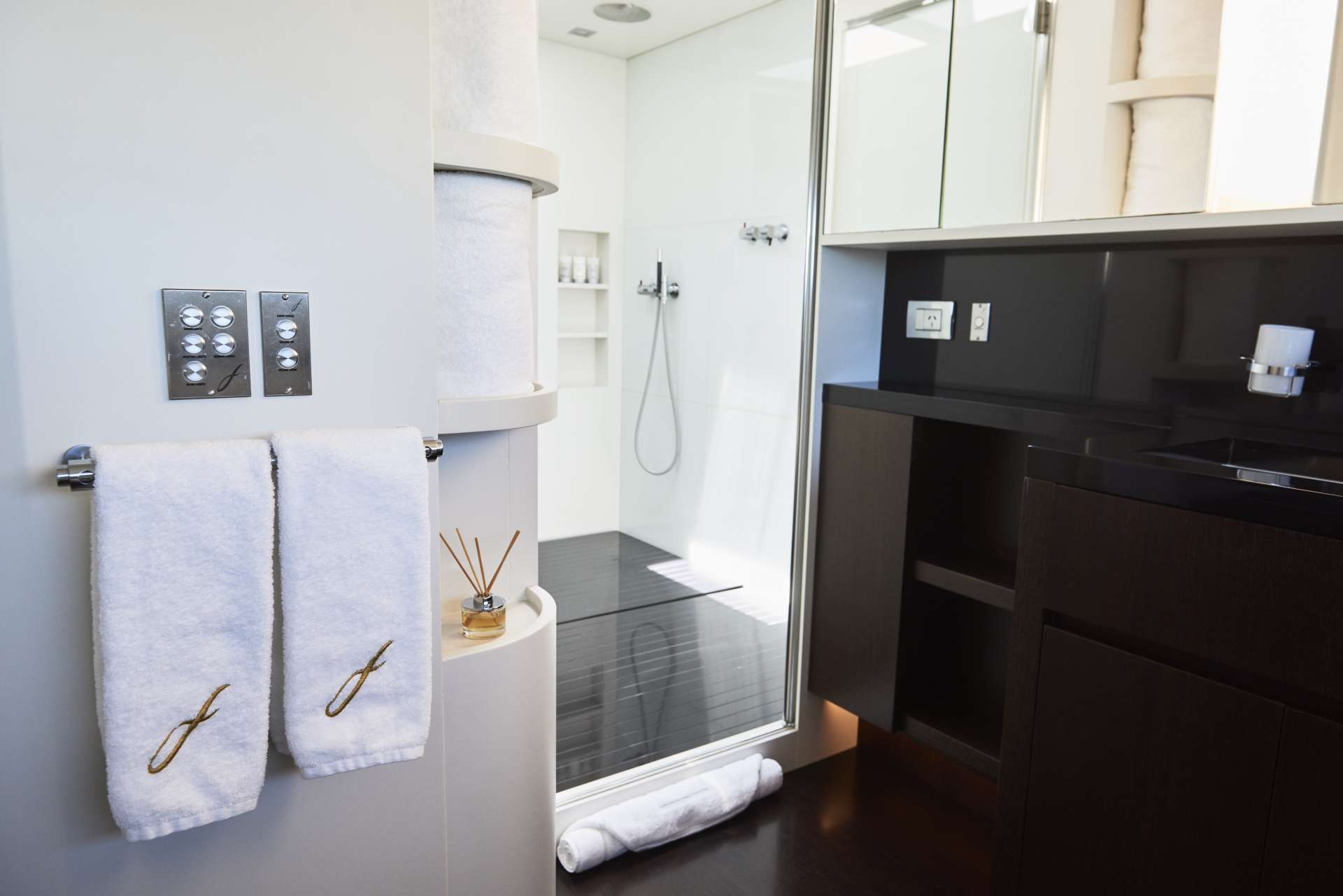 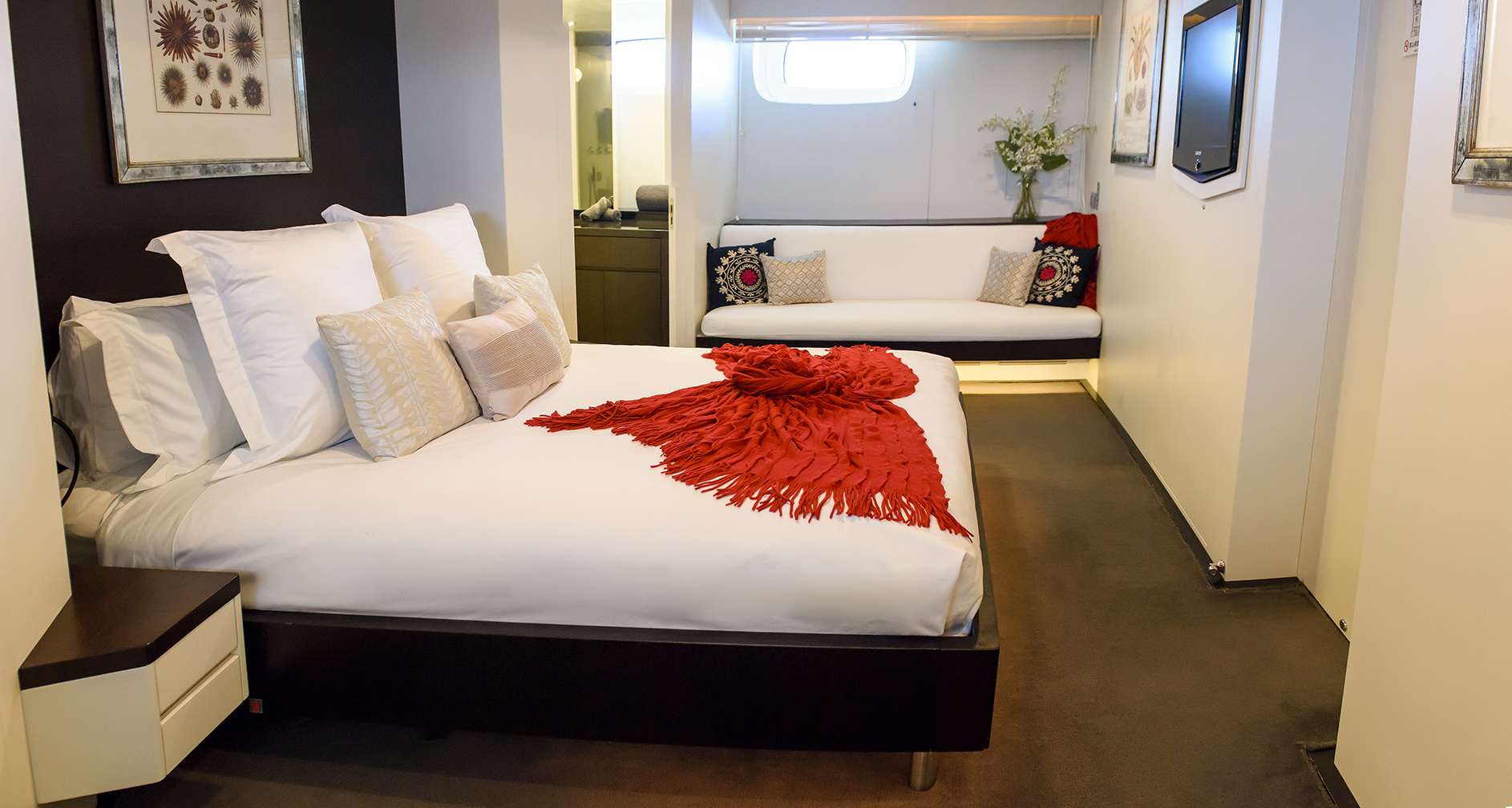 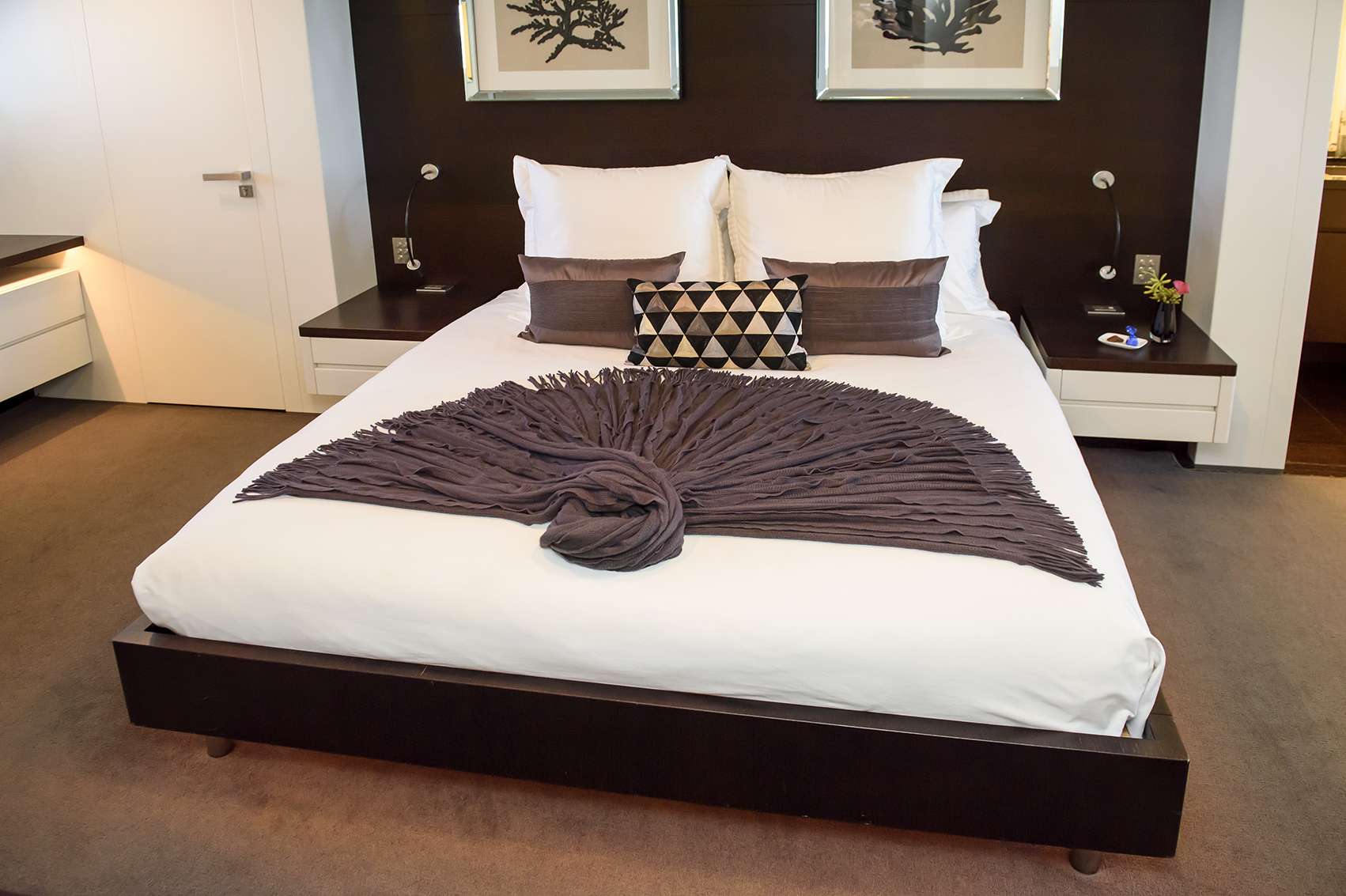 Accommodation is for up to 10 charter guests, in 5 attractive cabins. The master stateroom is on the main deck forward and full beam of the yacht. Upon entering the master cabin, there is a private study with seating on the starboard side, this leads into the full beam cabin space with a king size bed, sofa, desk, walk-in wardrobe and his and hers ensuite, creating a large central shower with sky light.
On the lower deck are 2 spacious VIP guest cabins, each full beam of the yacht, with queen size beds, sofa, desk and walk-in wardrobe (including hanging space).
A further 2 cabins are port and starboard, with side by side twin berths.

MAIN DECK
Master Cabin, full-beam with King-size bed.
His and hers ensuite, offering a large central shower with skylight windows offering beautiful light, separate toilet.
Private Study on starboard with library, as you walk in from the Main Salon.

2 x Twin Cabins with 2 x Single beds in each.
Non-convertible & no pullman.
Ensuite.

INFINITY PACIFIC is also capable of carrying up to 8 crew onboard in 4 cabins to ensure a relaxed luxury yacht experience.
Hairdryers in each cabin.
The yacht uses Bvlgari beauty range of products.
TV screens in all cabins.

Sundeck
• 6/8-pax jacuzzi, surrounded by sunpads, aft of the sundeck
• Wet bar
• Dining: beautiful wooden roundtable, offering seating for 9 guests (10 guests a little tight).
• Lounge area with seating for up to 12 guests and two low tables.
• Clear covers forward of the wheelhouse, ensuring protection from the wind.
The sundeck is 50% shaded. Sunbrellas can be setup to cover the jacuzzi area as well.

Main deck & salon
• Total formal dining (plated): 10-12 guests on different tables.
• Forward of the main salon, a roundtable offers formal dining for 6 -8 guests.
• Aft dining table: 8 guests around two tables, or up to 10 guests with the two tables joined together.
• Aft deck table – outside: 6-8 guests, casual dining.
• Informal Buffet: up to 20 guests in the main salon
• Swimming platform accessible from the main deck, with hot shower.

Gym equipment:
Any gym equipment can be hired on behalf of the Charterers (elliptical bike, running treadmill), and would usually be fitted in to the garage / or sundeck on application.

Originating from Western Australia, Sean joins INFINITY PACIFIC back in his home country after accumulating over 13 years of experience in the yachting industry overseas.
After graduating with a Bachelor of Sports Science and a Diploma of Education in PE & Health, Sean left Australia to join his first superyacht and not least, as a deckhand on board 72m Feadship M/Y UTOPIA DV. Working up the ranks, he secured his first Master role on board M/Y THE OFFICE in Western Australia, exploring the wild coast over 2 years.
In 2014 he decided to travel back overseas, and joined M/Y AUDACIA as 1st Officer, overseeing her winter program and crew training, which then led Sean to travel between Tahiti, the East coast of the USA and South East Asia for the next 4 years working on private and charter yachts.

Sean is an accomplished Captain/Master, also qualified in Celestial navigation, having completed 3 Pacific and 2 Atlantic crossings and logging over 100,000 nautical miles. He is a PADI Dive Master and has explored the underwater world over 500 times. Away from his enviable role as captain of INFINITY PACIFIC, Sean enjoys fishing, scuba and free diving, wakeboarding, spear fishing, hiking, camping and sports. Sean looks forward to sharing his knowledge with guests on board INFINITY PACIFIC and exploring Sydney and the Whitsundays further!

Growing up in Perth, Michael joined INFINITY PACIFIC in 2011 as a deckhand and after studying various maritime qualifications progressed to Chief Mate, and shortly completing his Master IV.
Being on the water comes naturally to Michael and in his time off he loves to visit Rottnest Island (a gorgeous paradise West of Perth), or go crabbing. Michael has cruised Australia West to East through the wild North Coast, and indeed his soul is filled when he is among the Kimberley’s incredible nature!

Matthew first gained experience in the yachting world as a Deckhand on 48m motor yacht ILONA in the Caribbean, after completing his diplomas in Antibes in 2002. He then cruised on his journey towards becoming a highly innovative Head Chef with a real passion for excellence. Matthew is a young individual with focus on producing fresh, tasty, nutritious meals to the highest standards, he has trained under many international travelling chefs (European and Scandinavian, around his hometown in Queensland, East Coast of Australia. Having worked in fine bistros, he then climbed the ladder from Apprentice to Head Chef, growing in his role to develop restaurants and train sous chefs to his standards. Returning to the Mediterranean, Matthew embarked on 30m Horizon LADY TATIANA in 2011, followed by extensive private cruising with NO COMMENT Red Sea, Adriatic, Turkey, Caribbean, ABC’s, Honduras, Belize and the Bahamas. Matthew gained experience in the Owner’s favourite restaurant, trained to cater for the children’s favourite dishes, strict dietary requirements including diabetics and MS conditions. Most recently on board SEVEN SEAS until 2017, Matthew then decided to return home to Australia. He is inspired by the environment around him, creating dishes from the constantly moving landscapes, textures, colours & smells, always respectful of seasonality of the produce available at the markets he loves to visit. Matt is also as PADI Advanced Open Water Diver. 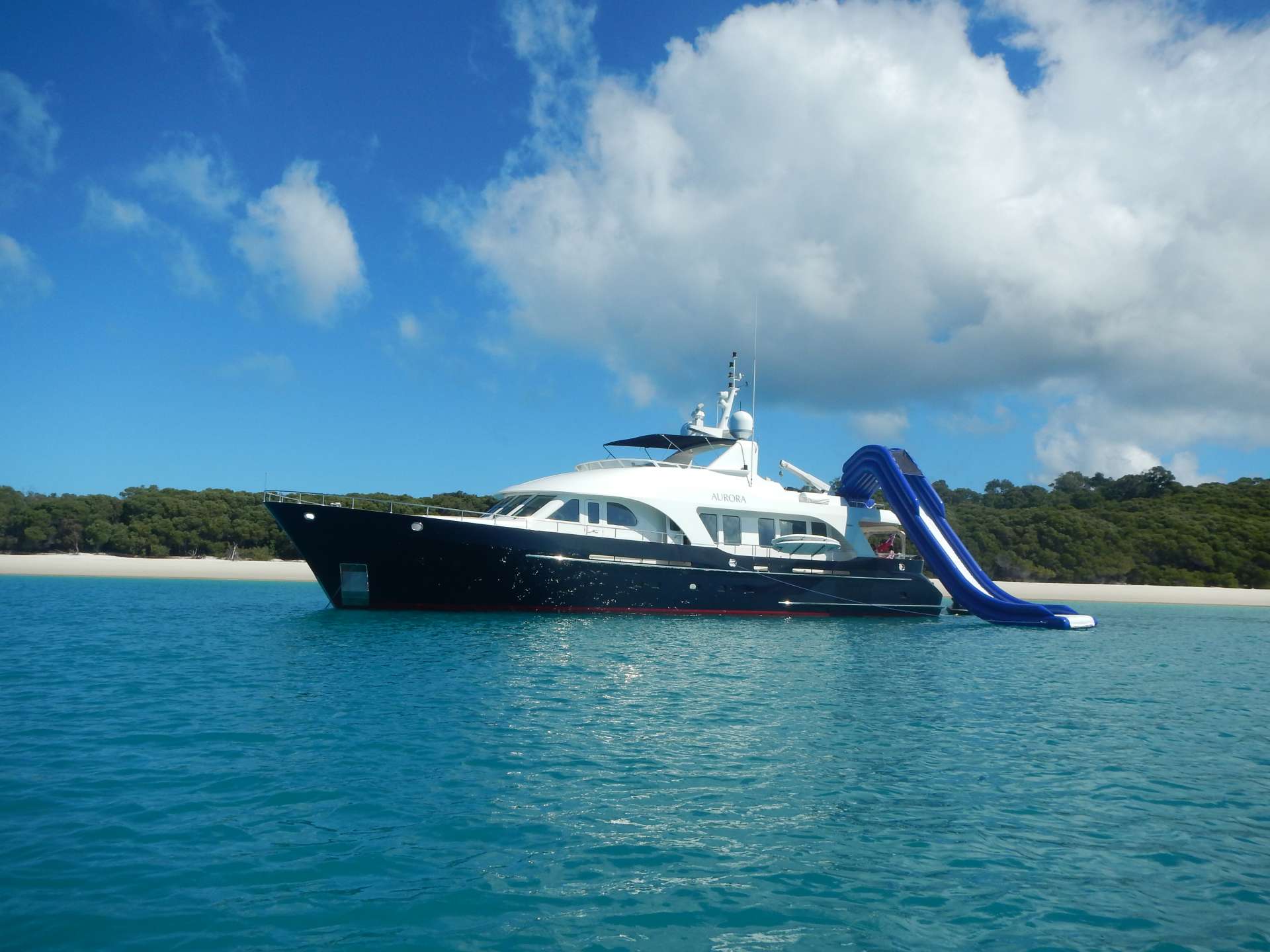 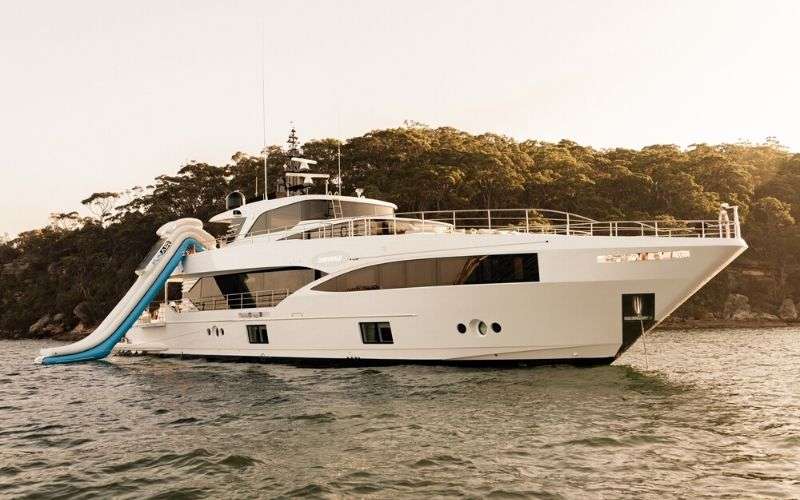 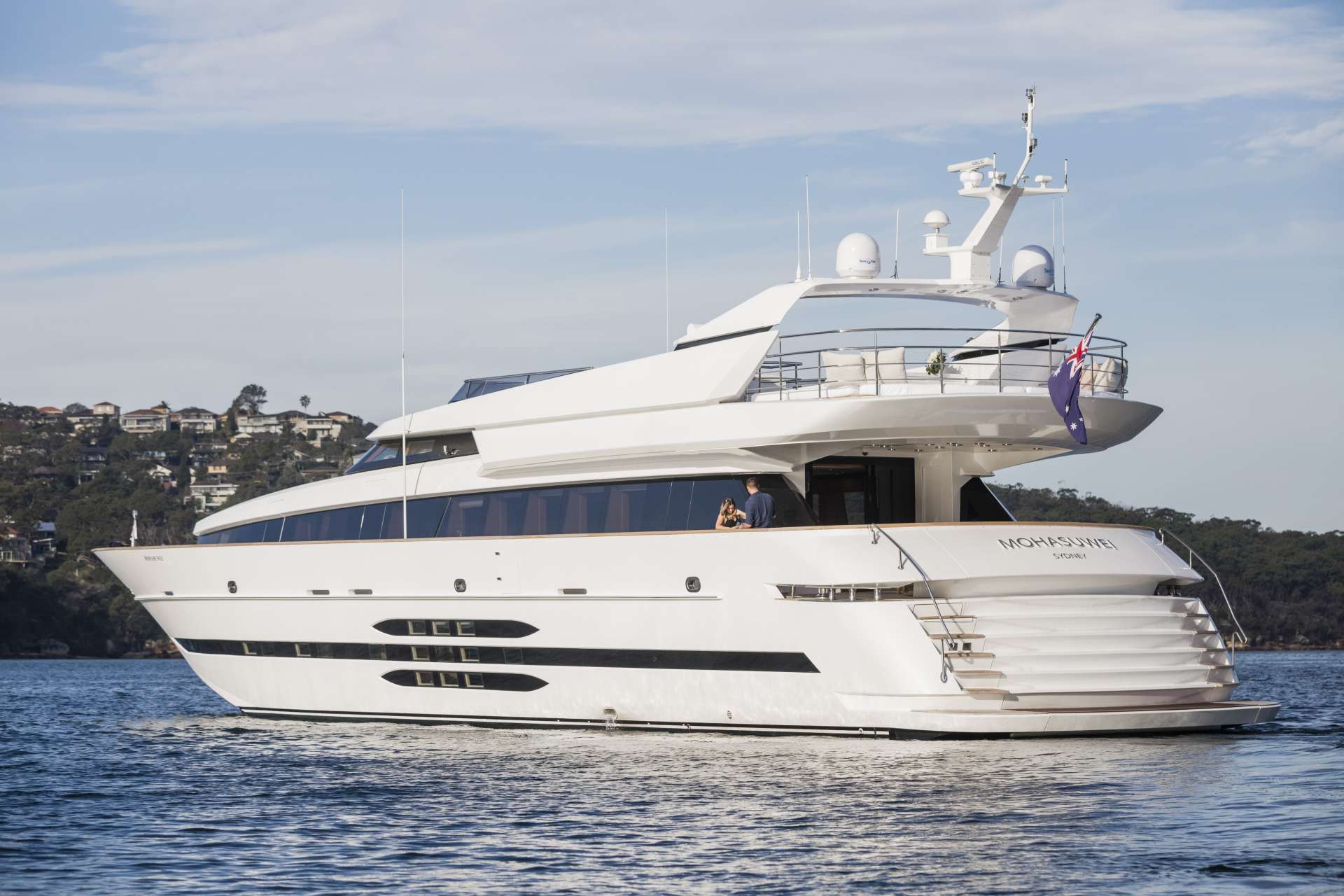