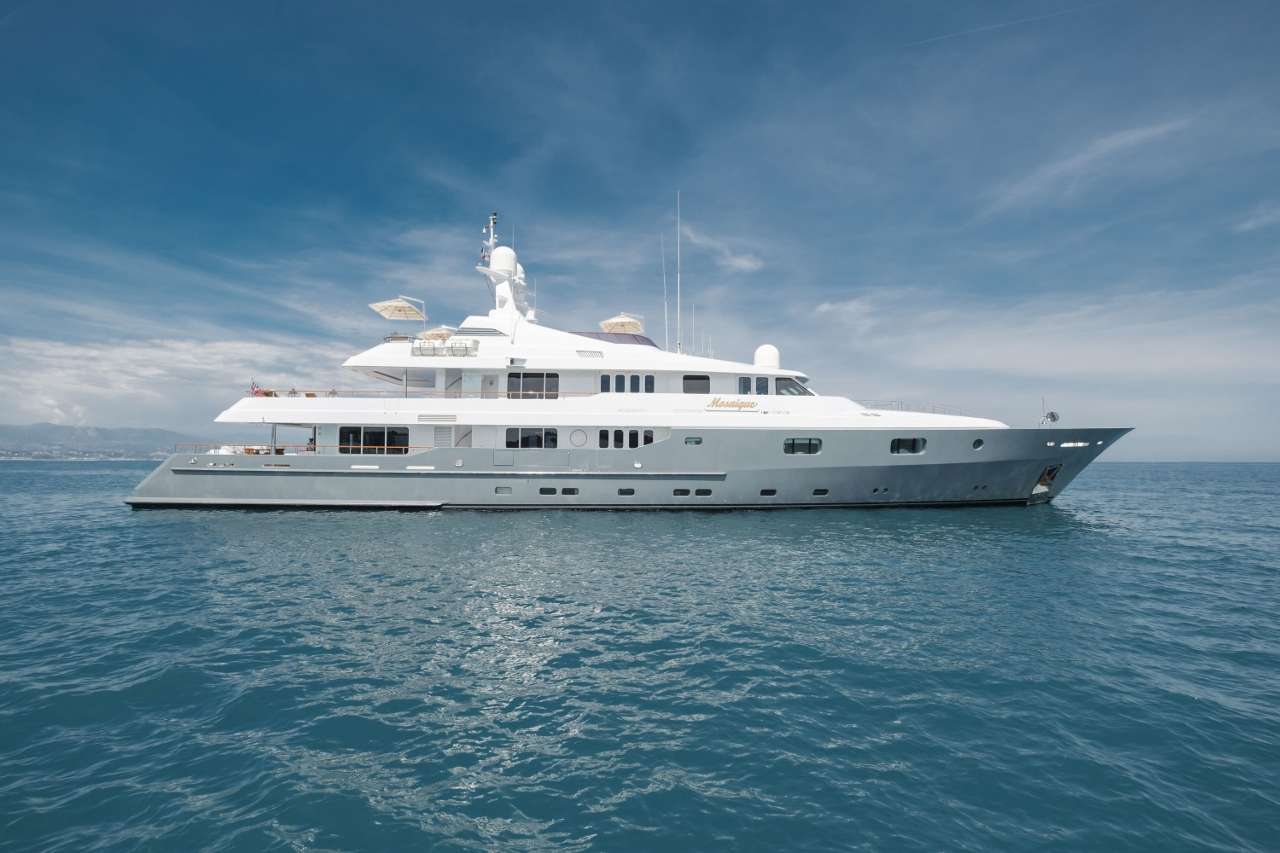 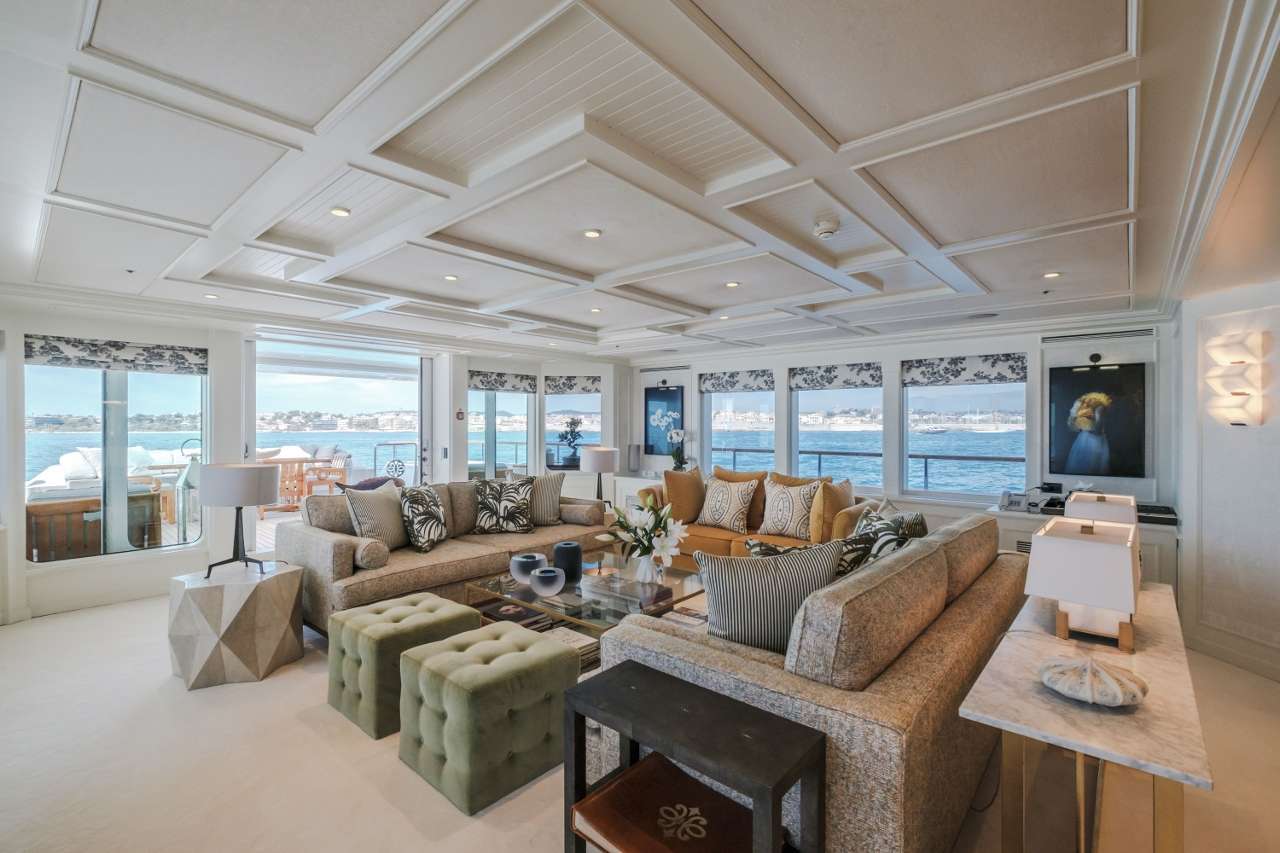 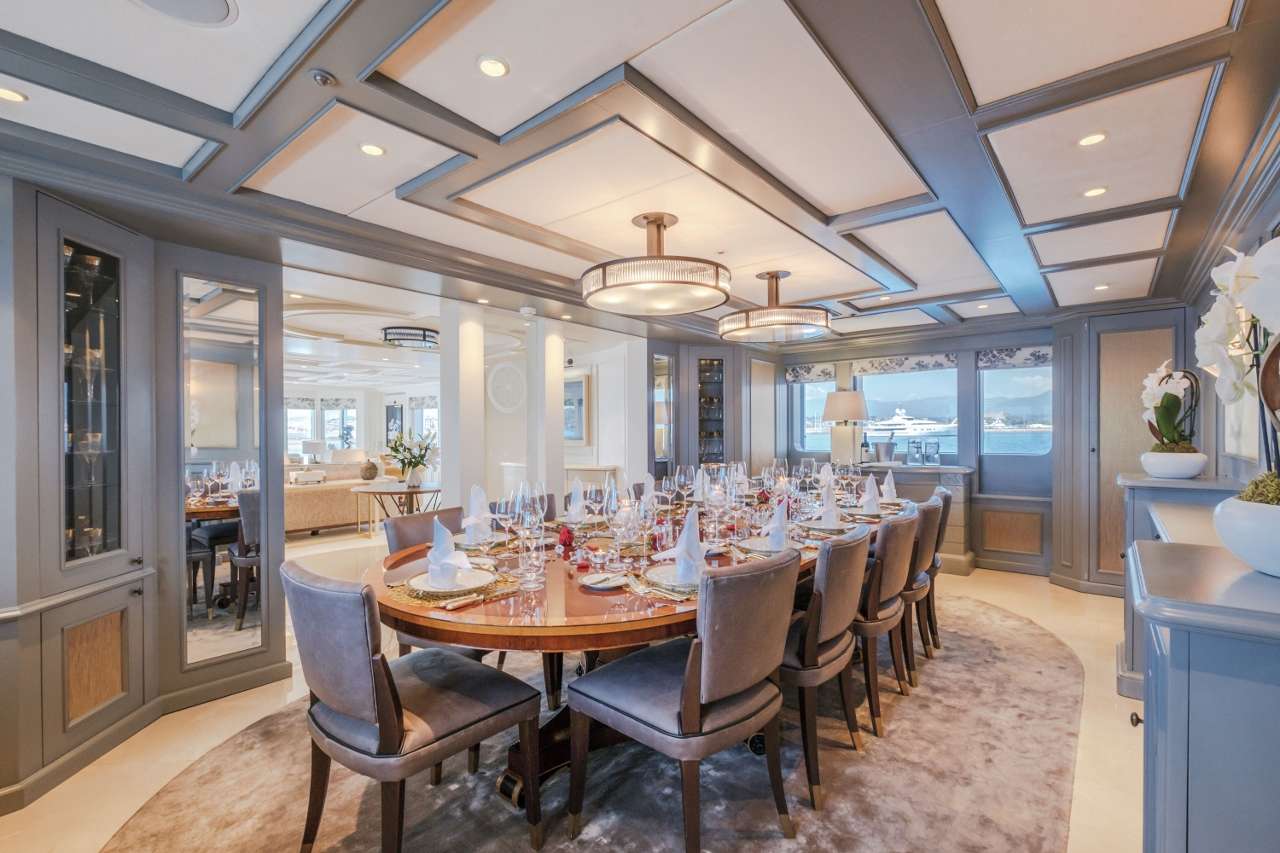 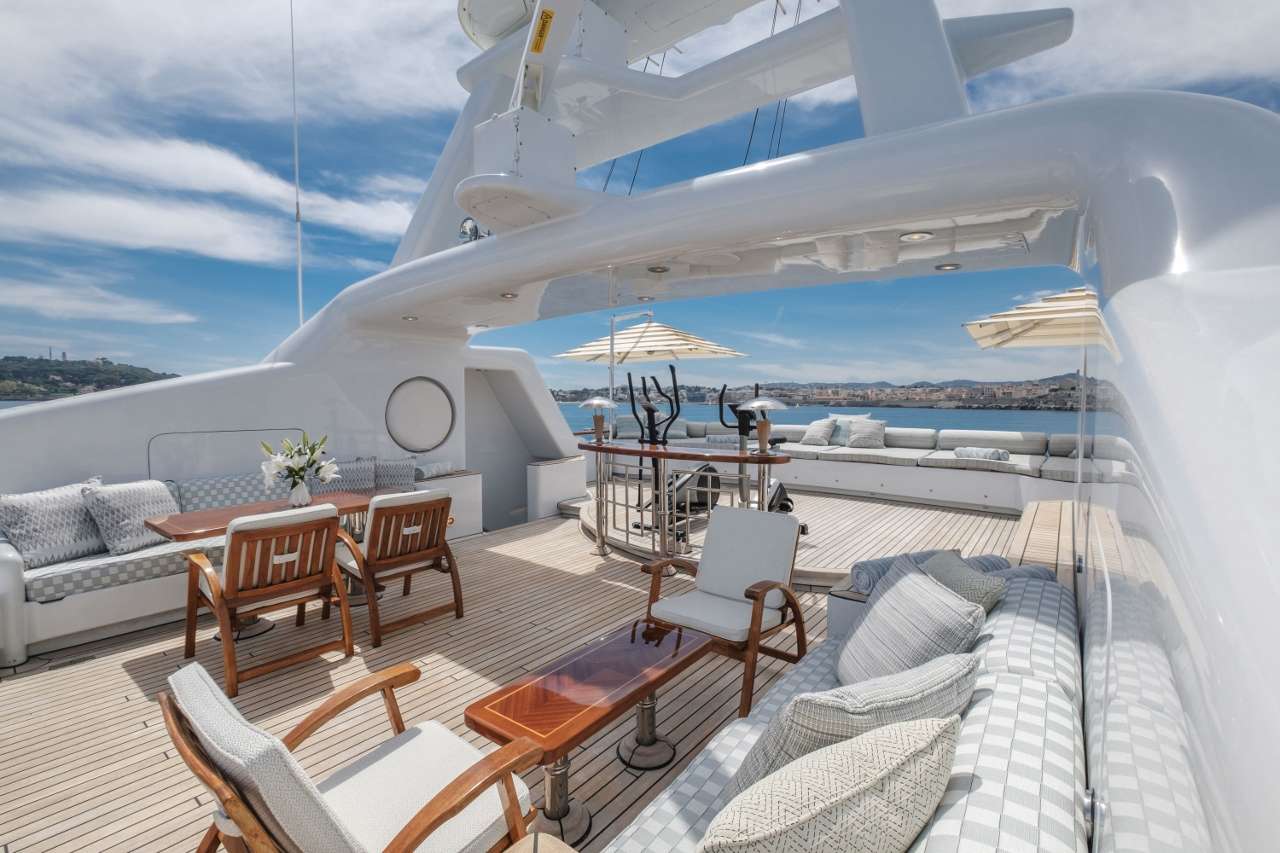 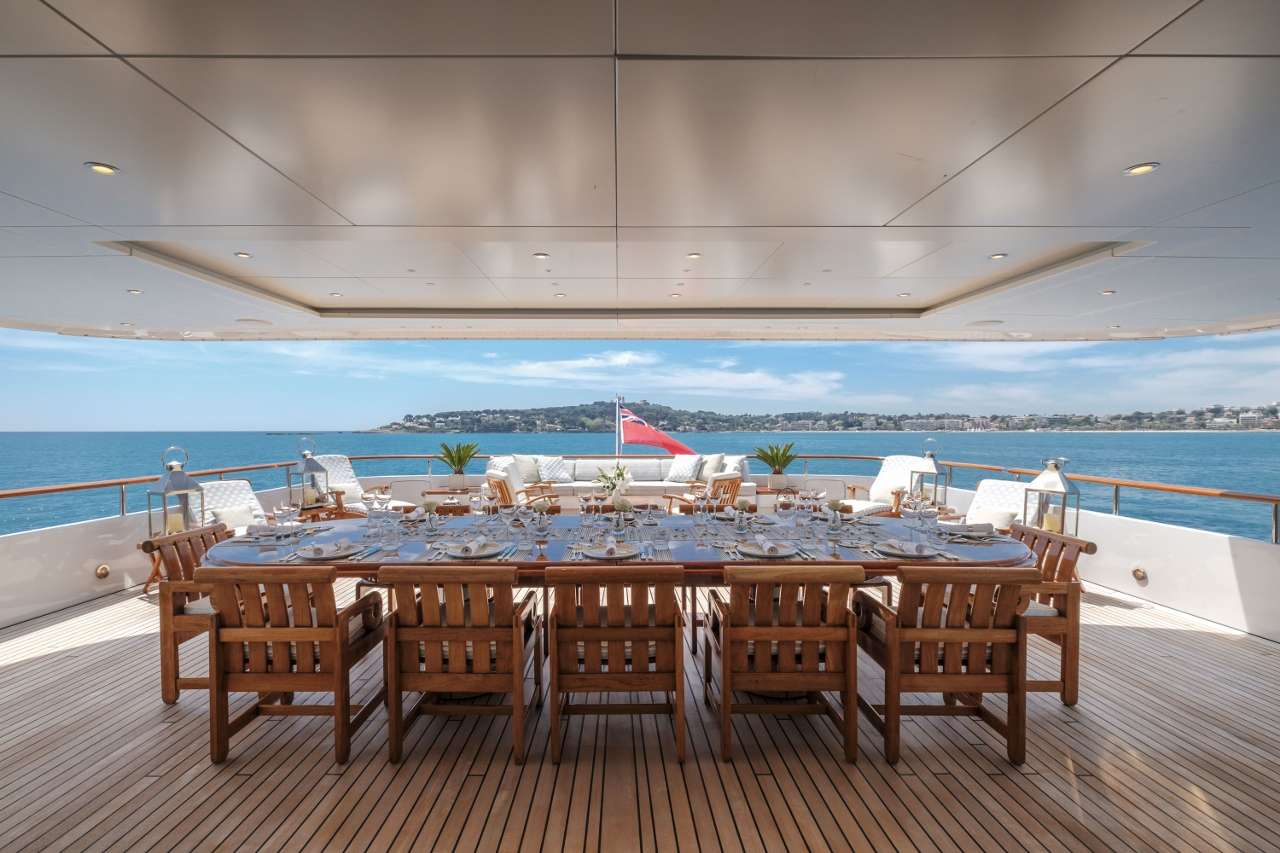 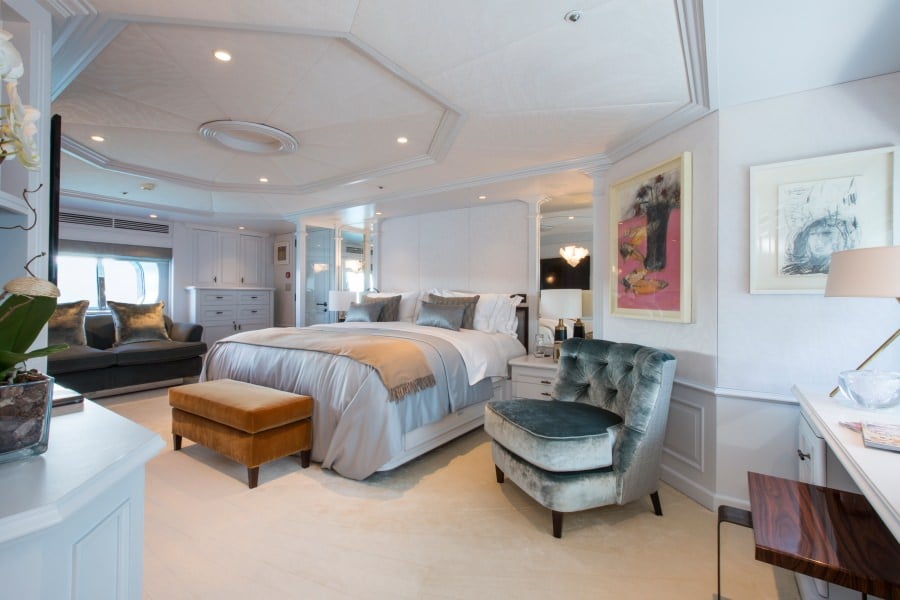 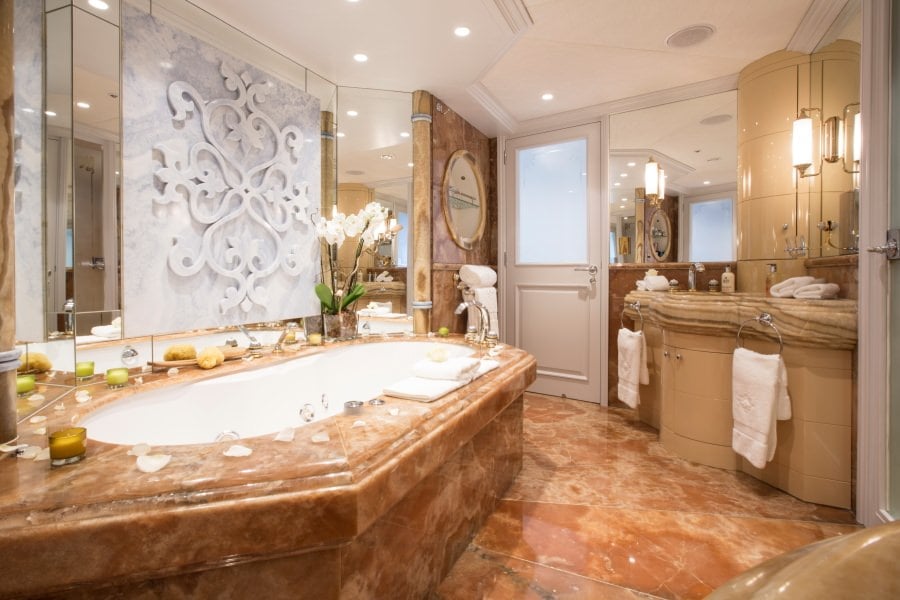 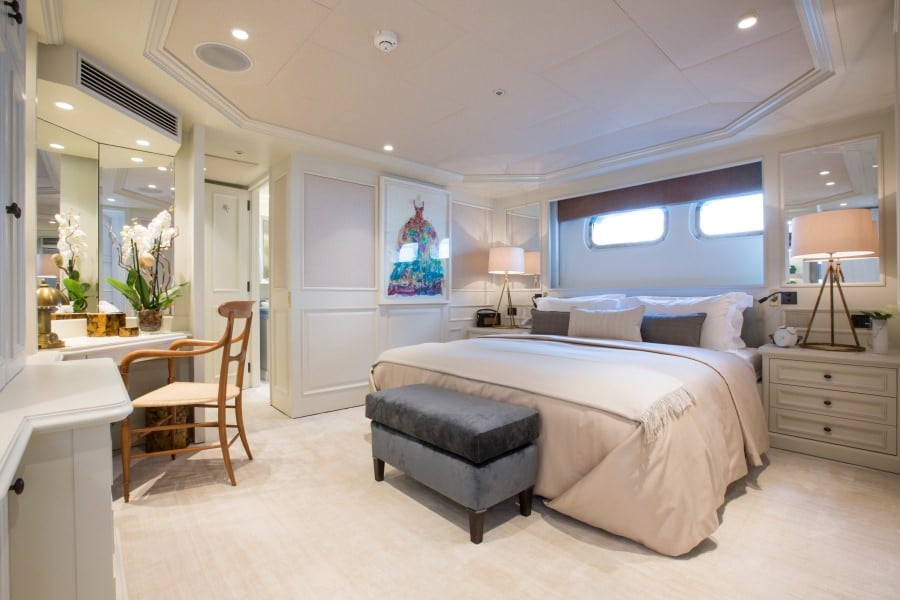 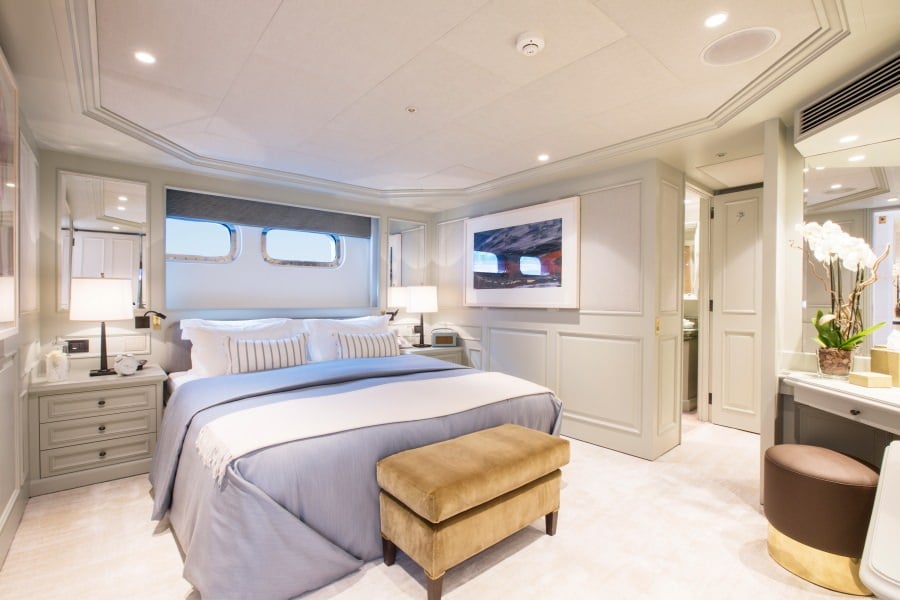 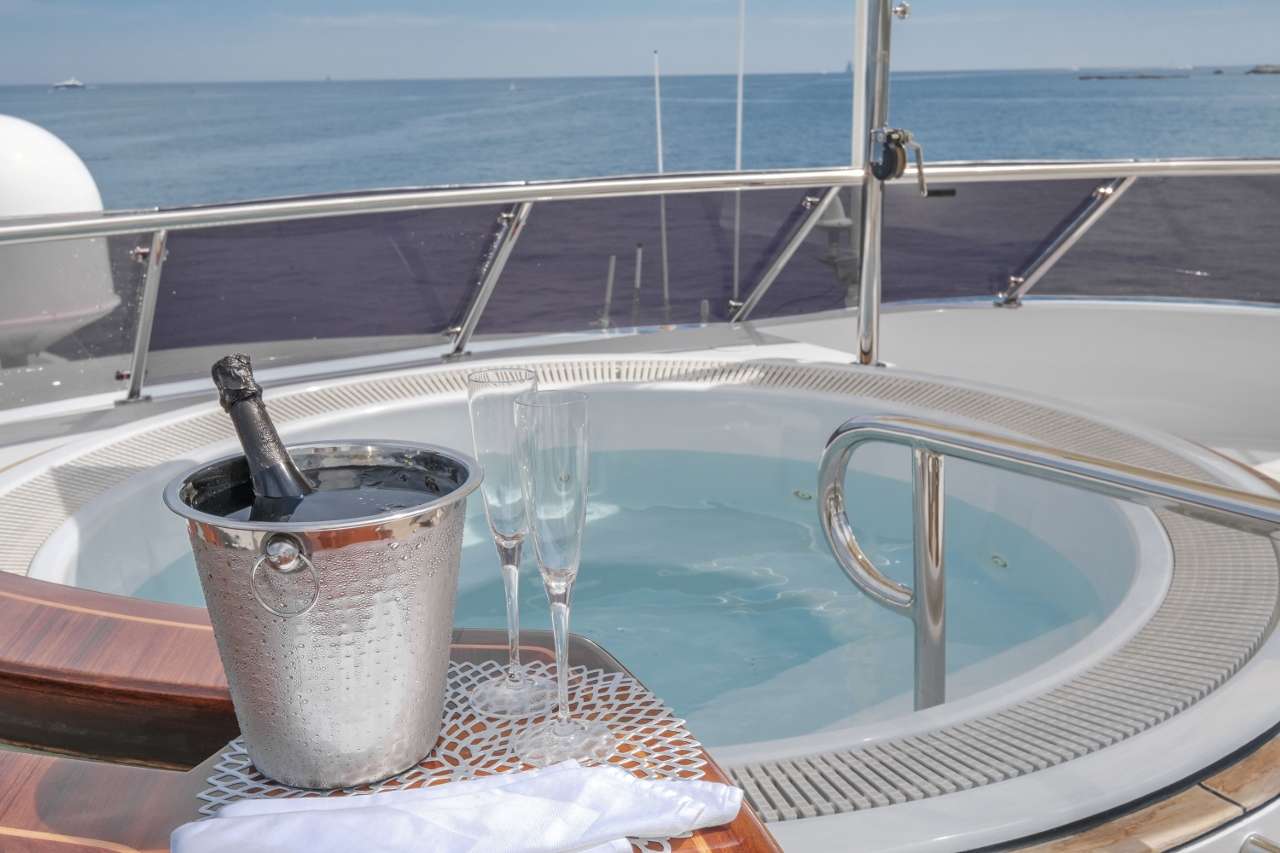 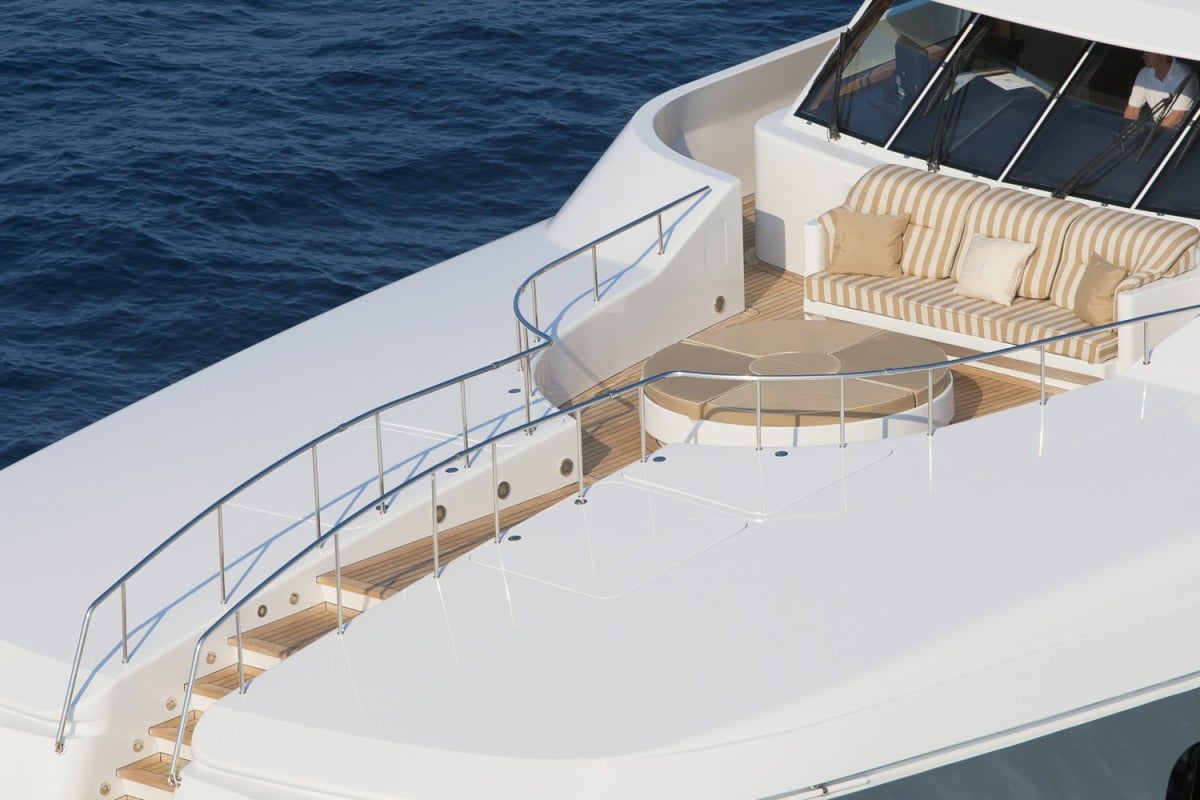 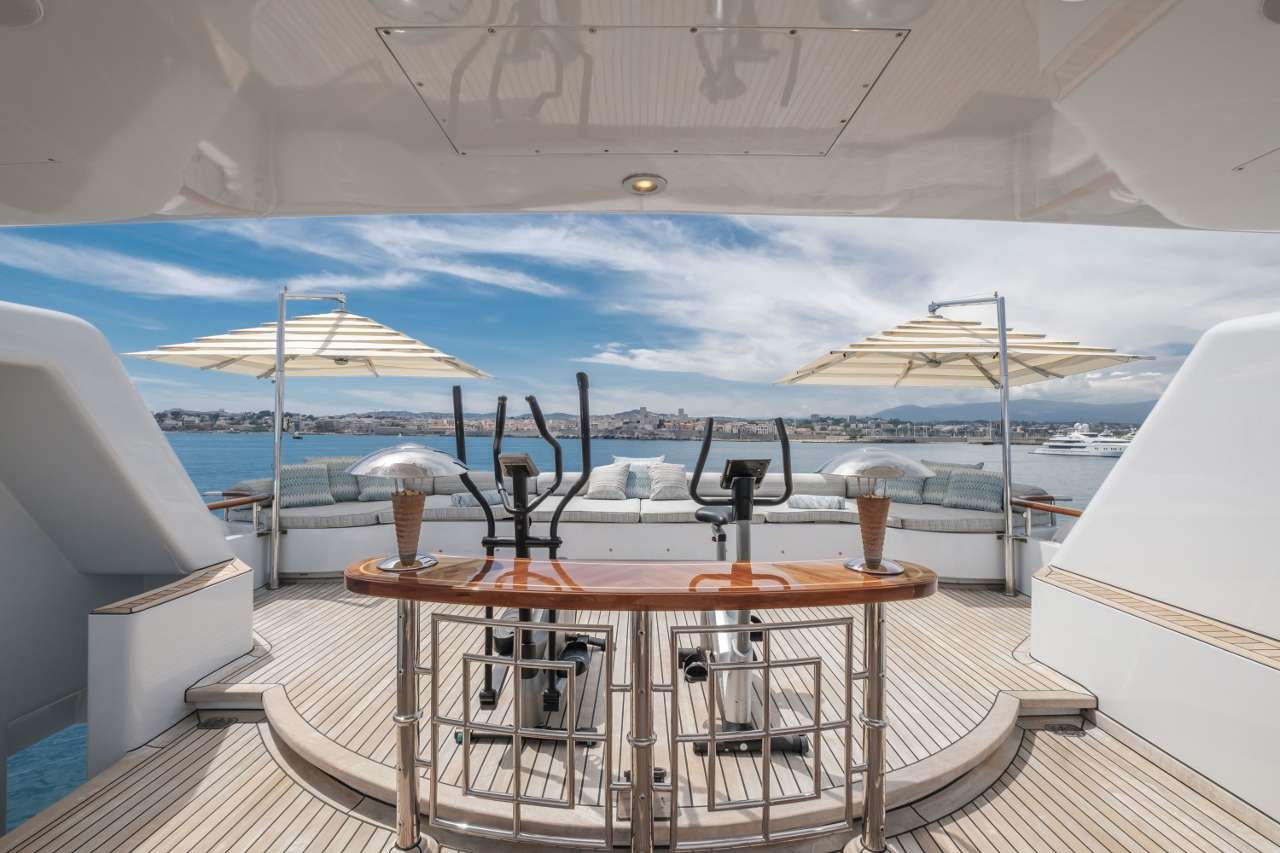 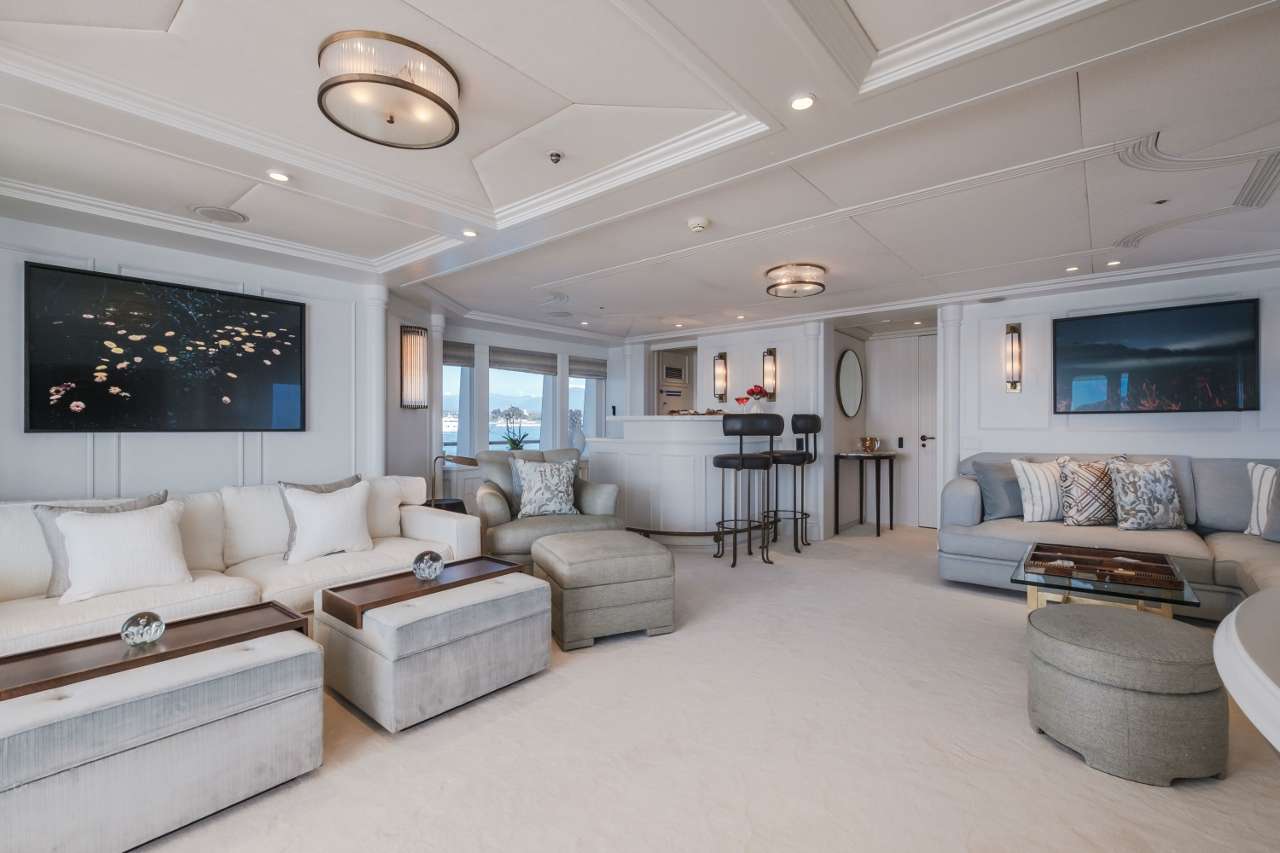 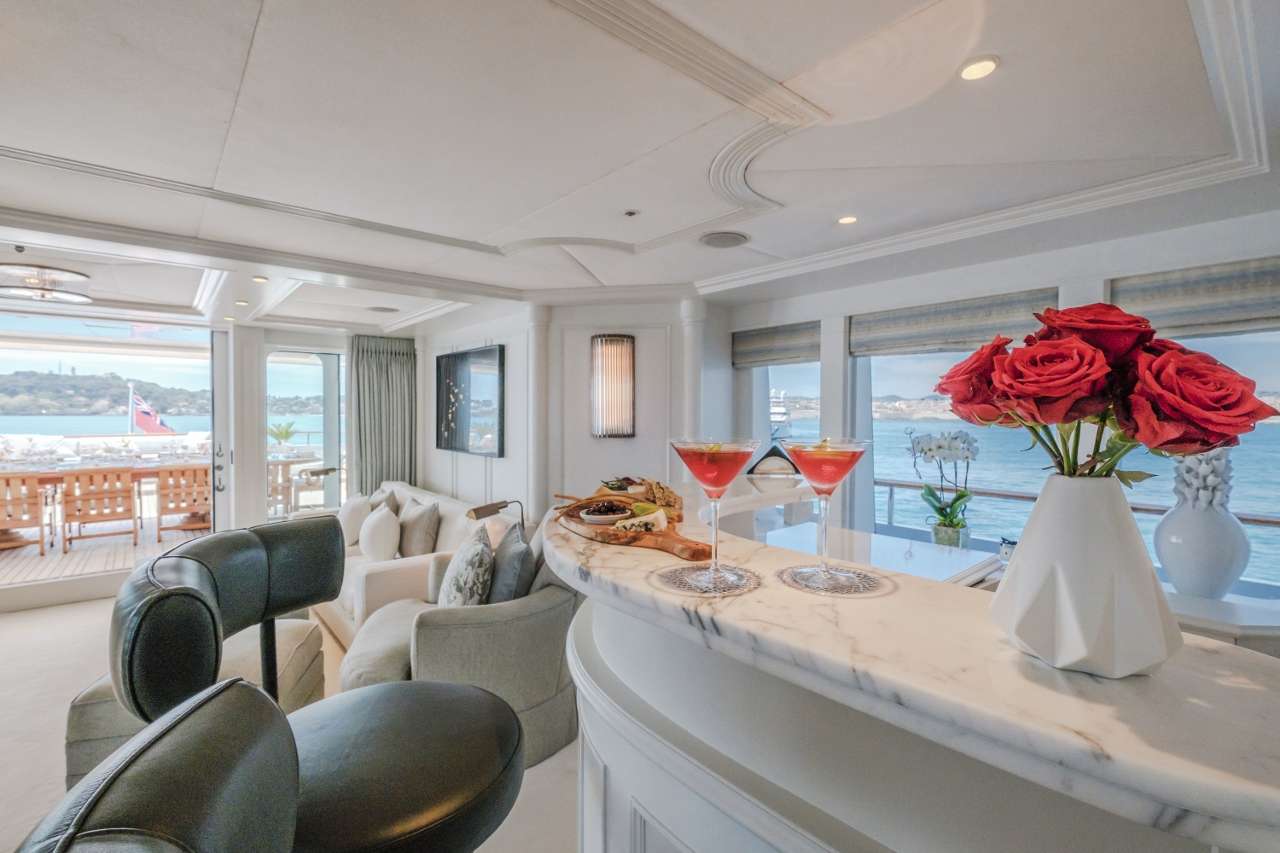 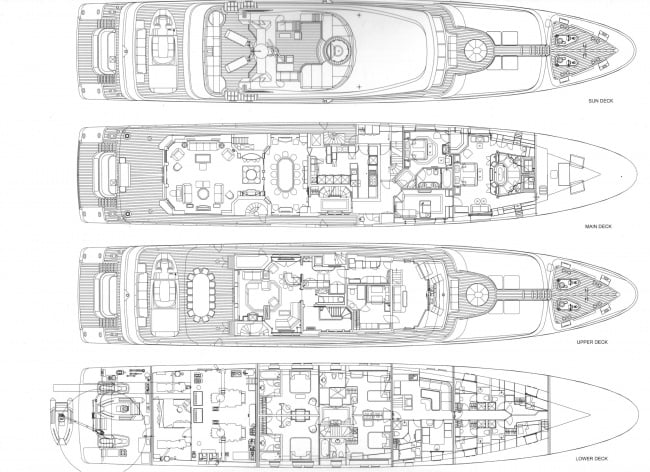 Other Entertainment: AV system with HD screens throughout the yacht updated with new releases (2007).

Audio on demand system available throughout the yacht (inside & outstide).Sound server and IPOD docking stations in both saloons and all cabins.

Music CD, DVD and video films in all cabins.

Large library of CD’s, video tapes and DVD’s.
Selection of board games.

Swimming platform for easy access to water and tenders with hot and cold shower.

Retractable hydraulic Mediterranean passerelle and side boarding ladder for easy access when docked.

Electrical sockets: 220 Volts and 50 Hz. Adapters
Uk to European for Uk appliances are available on board.

Safe in all cabins

CAPTAIN: Peter Rackemann – Australian
Joined Spring 2020
Peter grew up as a competitive sailor and surfer and has gained a lifetime of knowledge and experience at sea that still influence his decisions today. He previously worked as an Instructor and Examiner for Maritime Safety in Australia also as a physical education teacher.
In 2010 Peter joined the yachting industry and worked his way up to the career ladder before becoming Captain of M/Y Awatea in 2015. Most recently he has Captained M/Y Flying Dragon and the very busy charter yacht M/Y Entourage.
Peter is a very well-respected, hands-on Captain, He is very excited to join the established and successful team onboard M/Y MOSAIQUE.
Peters passion outside of yachting is staying physically fit which comes from his previous career as a Physical Education teacher, he loves surfing, sailing, basketball, cycling and any challenging outdoor activity.
Previous yachts: M/Y Flying Dragon (45m), M/Y Entourage, (45m), M/Y Awatea, M/Y Cakewalk (85m), M/Y Carolina (48m)
Languages: English

Peter has consistently had great feedback from charter clients:
“The crew were excellent under the hugely capable and likeable Captain Peter”

“We’ve already experienced a lot of trips on yachts and we must say that you are by far the most active, communicative and amiable Captain we’ve ever travelled with! Also the kids find you the coolest Captain.”

CHEF: Erik Lengyel – Hungarian
Joined Summer 2019
Erik is a culinary trained chef with over 10 years’ experience, 8 of them being in yachting, describing himself as organised, meticulous and with an attention to detail, he is passionate about food and loves to “create”.
Erik has recently stepped off the 100m private M/Y Dynasty 1 where he prepared meals for up to 35 guests and 35 crew, cruising in the Middle East and the Mediterranean.
Prior to this he was onboard the very busy charter yacht M/Y Axioma (72m) for 3 years as sous chef, this was a dual season yacht with a fully booked Caribbean calendar, cooking for 20 crew and 12 guests, where he prepared on a daily basis canapes, fresh breads and pastries.
Erik started his chef career in a busy restaurant in Salamanca, Spain where he started as second chef and within a year was promoted to head chef catering for up to 150 guests per day. Now joining this great crew on Mosaique, Erik is looking forward to the season and showing his culinary expertise. When not busy in the galley Erik enjoys football and padel.
Previous Yachts: M/Y Dynasty 1 (100m), M/Y Gattopardo VI (40M), M/Y Axioma (72m)
Languages: Hungarian, Spanish, English

CHIEF STEWARDESS: Alyona Nedeva – Bulgarian – image attached
Joined Spring 2019
Alyona has over 9 years’ experience as a Chief Stewardess on both private and charter yachts and has travelled all over the world doing so! Not only this, but she is also a qualified pharmacist. With exceptional knowledge in wine, cocktails and cigars – all attributes that have helped her move up the ranks in the career that has given her endless satisfaction so far.
Over the years, Alyona has accrued a wealth of hospitality knowledge and being a vital team player has been her motto from the start. Her confidence and skill-sets are things she likes to share, and she has ease in teaching and guiding her fellow team members.
In her spare time Alyona, loves sports, reading, travel and yoga.
Previous Yachts: M/Y Atlantica Seconda (40m), M/Y Eclipse (45m), M/Y Moonlight (85m)
Languages: English, Bulgarian, Russian.

CHIEF OFFICER: Bogdan Cholakov – Bulgarian
Joined Summer 2019
Bogdan started his yachting career in 2006 when he joined the Navy as a deck cadet on a 210ft Supply Vessel. He then discovered the luxury yachting industry and in 2007 joined the 20m M/Y Sexta as a deckhand.
Taking courses and exams and moving up the ranks to become first a bosun, then 2nd officer and in 2013 he became a chief officer. Now joining Mosaique he is looking forward to passing on his knowledge.
When not busy on Bogdan enjoys a healthy lifestyle and likes to keep fit, playing football, tennis and going to the gym.
Previous Yachts: M/Y Double Down (212ft), M/Y Natita (216ft), M/Y Panthere (164ft)
Languages: Bulgarian, English, Spanish, Russian, basic Italian

CHIEF ENGINEER: Vladimir Separovic – Croatian
Joined Spring 2018
Vlad, a skilled engineer did his apprenticeship and training on merchant and cruise vessels. Joining the yachting industry in 2015 where he quickly adapted his skills on the world’s largest privately owned residential yacht “The World.”
He originally studied at the University of Zadar where he completed his master’s degree and has since studied to get his chief engineer unlimited 111/2. Vlad has a great general knowledge of all IT/AV systems on board, is skilled with satellite communication systems, has a good sense of humour, is a solid team player and loves sailing, hiking and reading.
Languages: English, Russian.

BOSUN: Edward (Ed) Gravenstede – British – image attached
Joined Spring 2019
Ed hails from the UK and has always had interests in varied fields but it was his love for travel and desire to explore that attracted him to the yachting industry and in 2016 he landed his first job on S/Y Mystery (Swan 34M) during a busy yard period before moving quickly onto M/Y Hooligan (24m) as deckhand /steward.
Ed’s prior experience in high end hospitality installed in him an efficient manner, creative thinking and professionalism – all skills that he mirrors today as he forges his way into his third year in the career of his choice.
In his spare time, Ed is unable to resist his love for the “big outdoors” and he is at his happiest when he is involved in any kind of sporting activity.
Previous Yachts: M/Y Nati Tre (34m), M/Y Hooligan (24.5m)
Languages: English

DECKHAND: Daniel Truss – New Zealander
Joined Summer 2019
This is David’s first season in the yachting industry, however he is already well versed since he has been involved with motor boats since he was young, having grown up near the water. David has experience in all of the day to day routines, he has raced optimist sail boats for four years. David’s hobbies also predominantly revolve around water and boats, wakeboarding, water skiing, lake and ocean fishing, sailing, and kiteboarding. But he also has interests in skiing, rugby, and travelling
Previous Yachts: M/Y Ramble on Rose (60m), M/Y Slipstream (60m), M/Y Elysian (60m)
Languages: English

DECKHAND: Tamsin Prynn – British
Joined Spring 2019
In the past 7 years Tamsin has had some interesting jobs, spanning from a DJ at her own Soho (UK) nightclub to ski guide and bar supervisor.
Each of these positions, it seems, helped her to migrate towards yachting, when in 2016 she landed her first yacht crew position on board M/Y Essence (32m) as cook/stew. Since that moment, she knew that yachting would be her lasting career and she literally hasn’t looked back. The experience she has gained has served to reinforce skill and confidence and her sporty nature has inspired her to work towards the Officer of the Watch certification. Tamsin’s hobbies are 100% sport and her favourites include running, surfing and skiing.
Previous yachts: M/Y Basmalina II (42m), M/Y Le Must (32m)
Languages: English