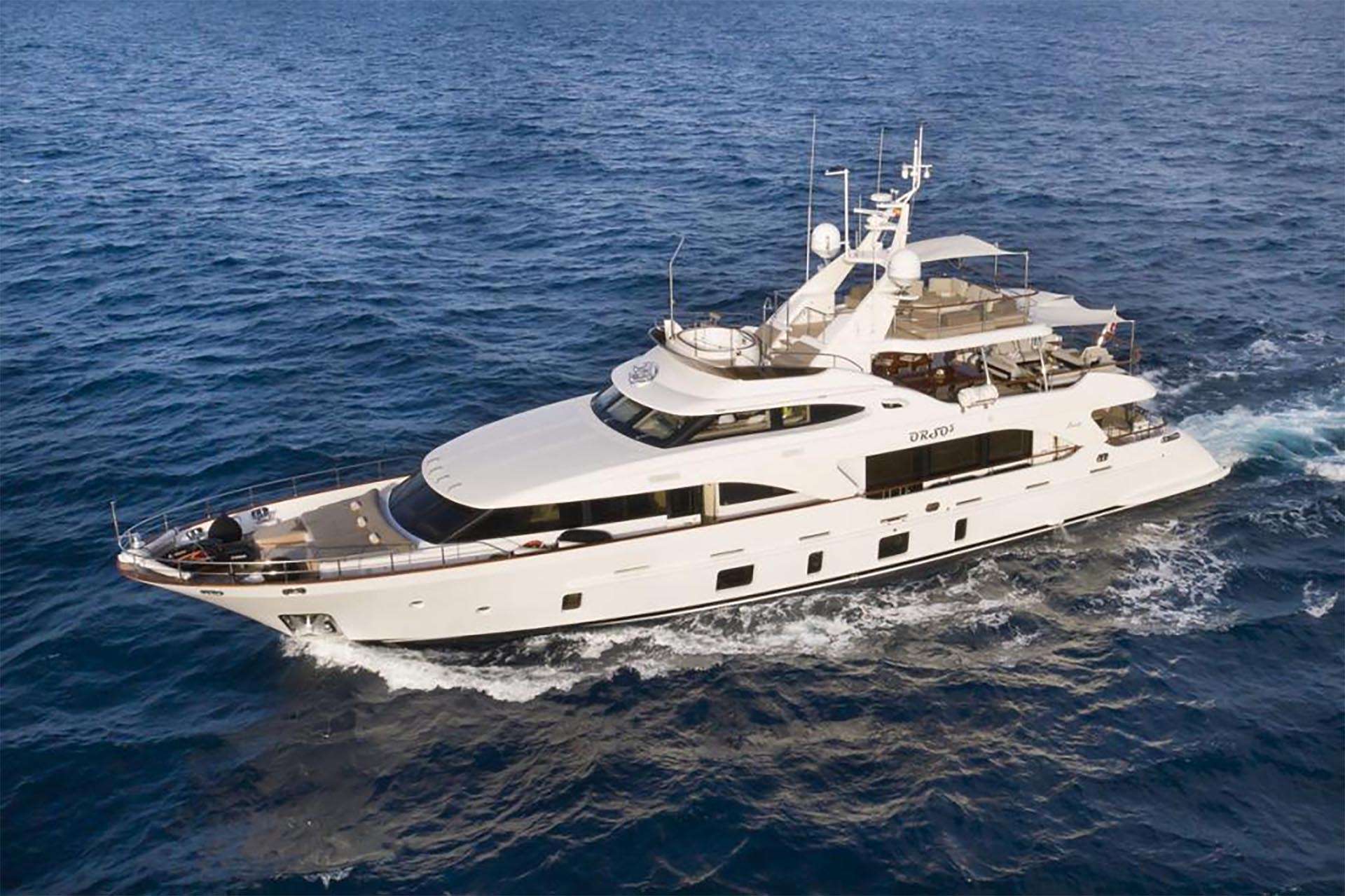 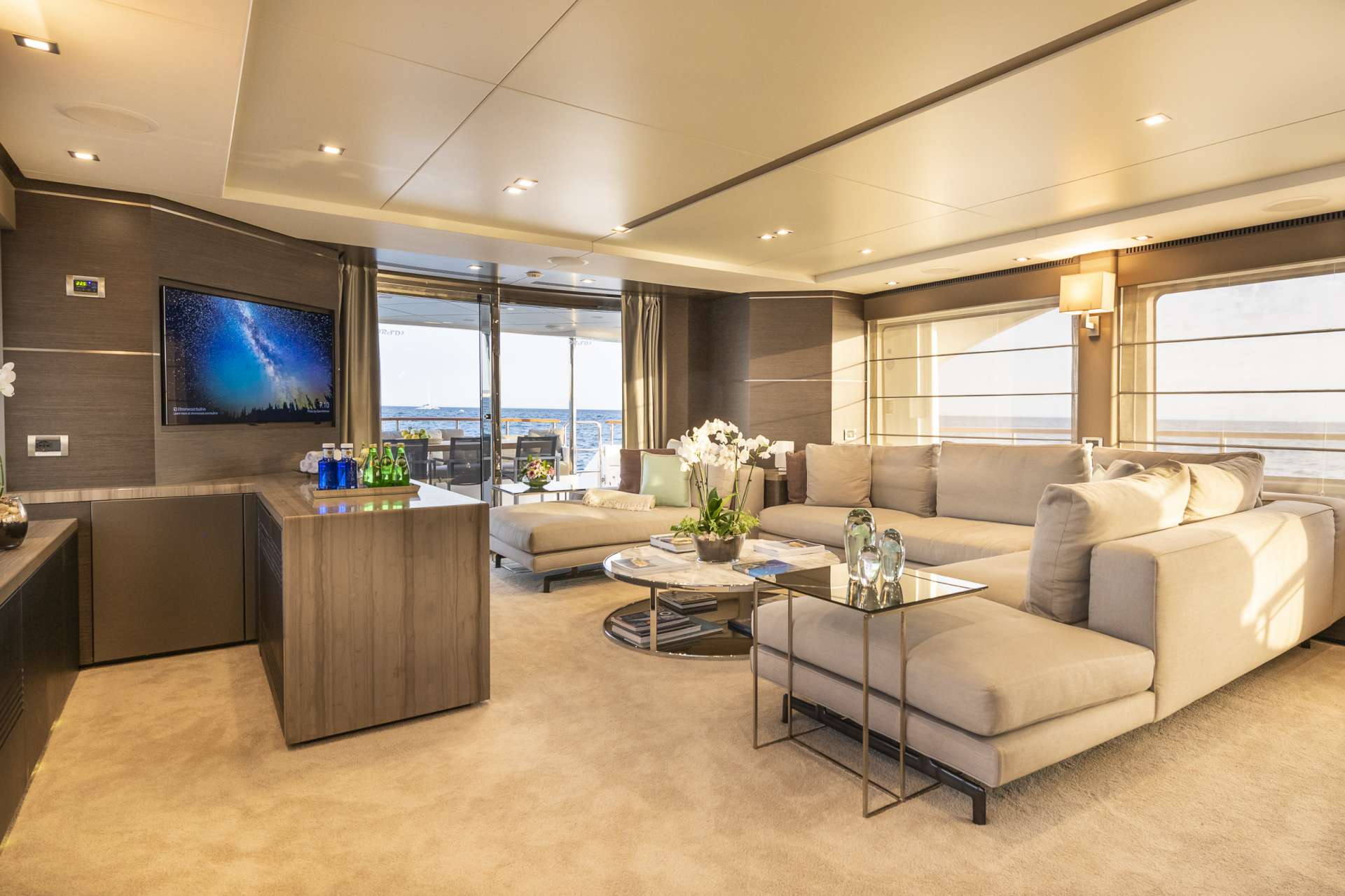 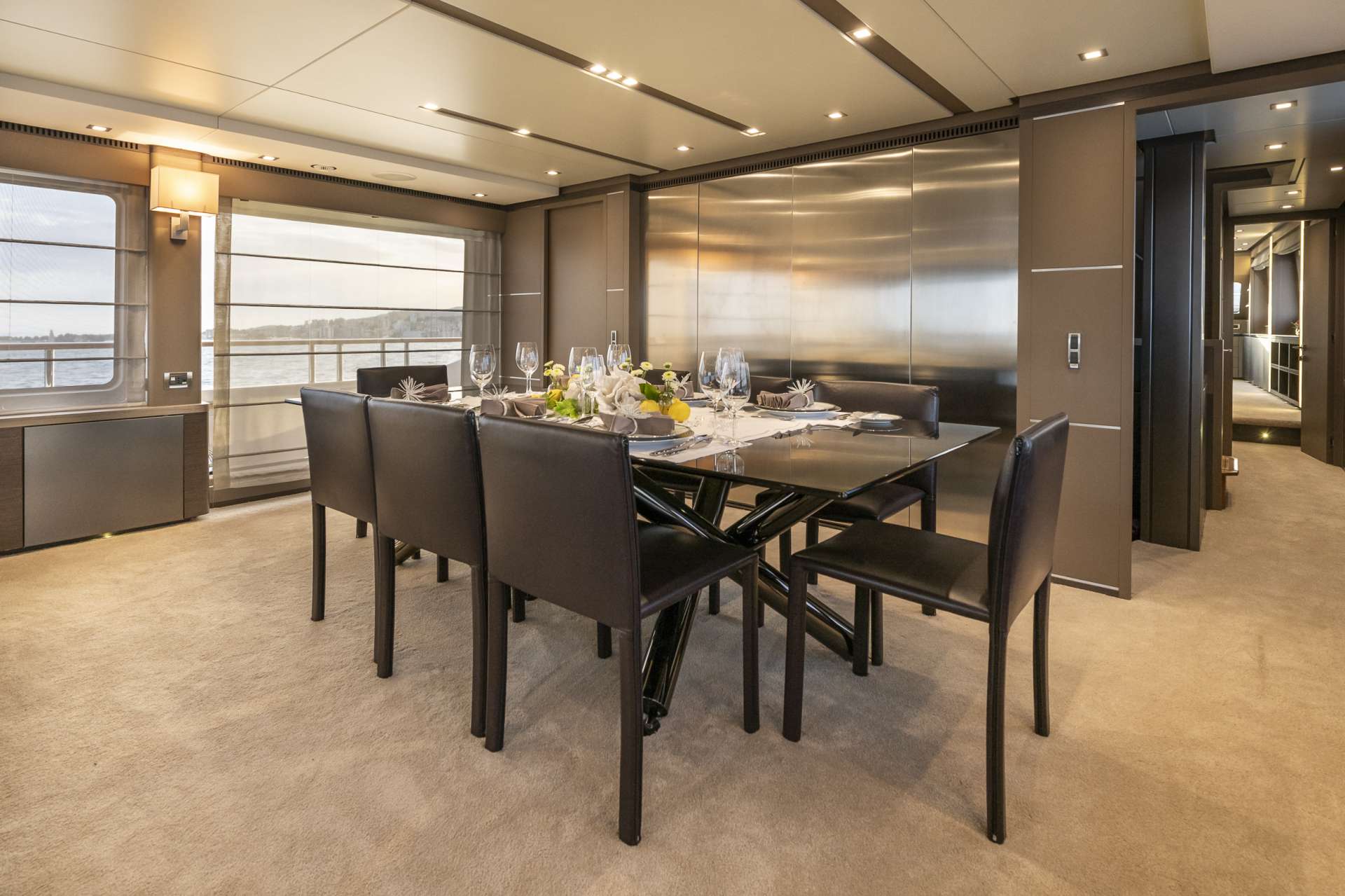 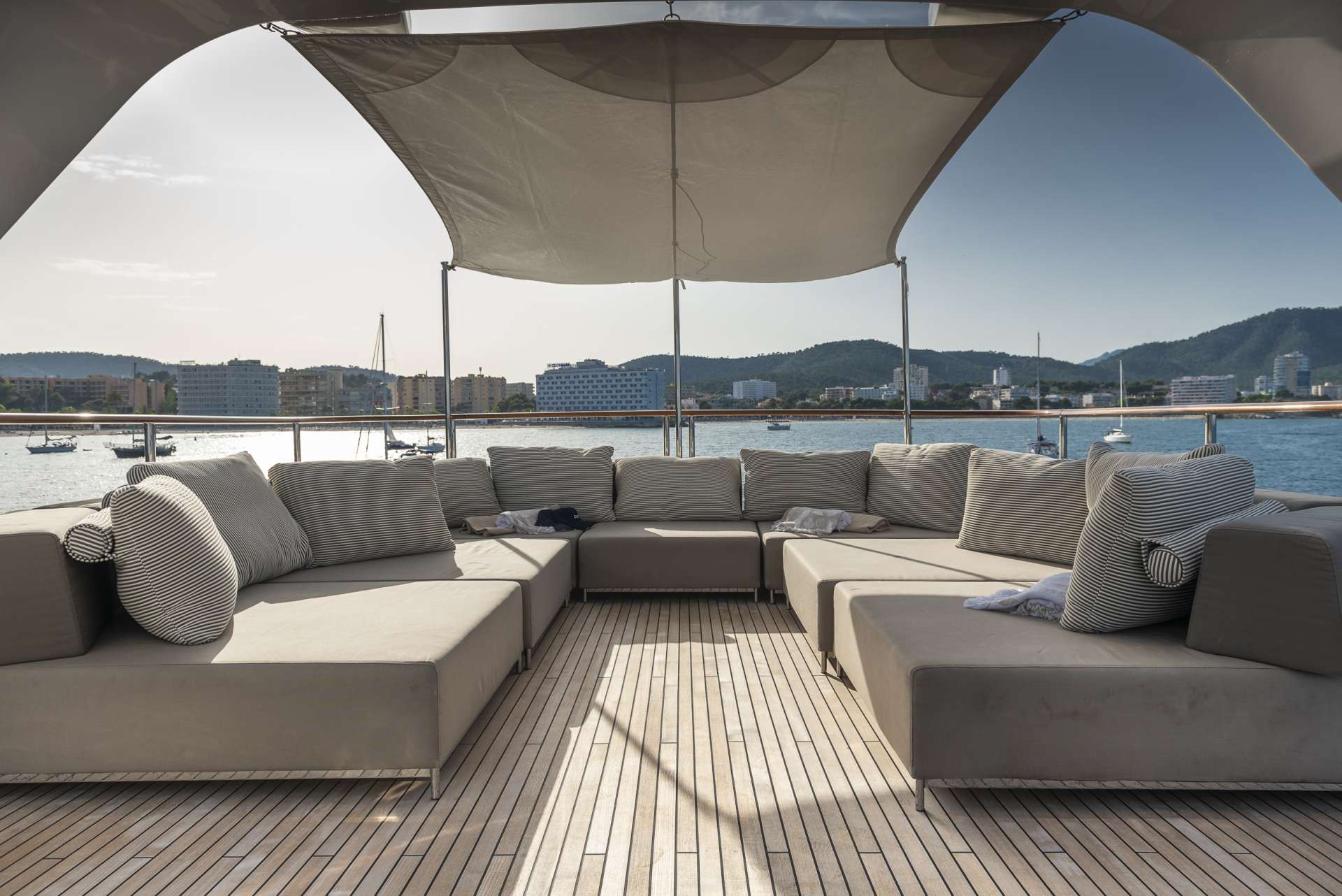 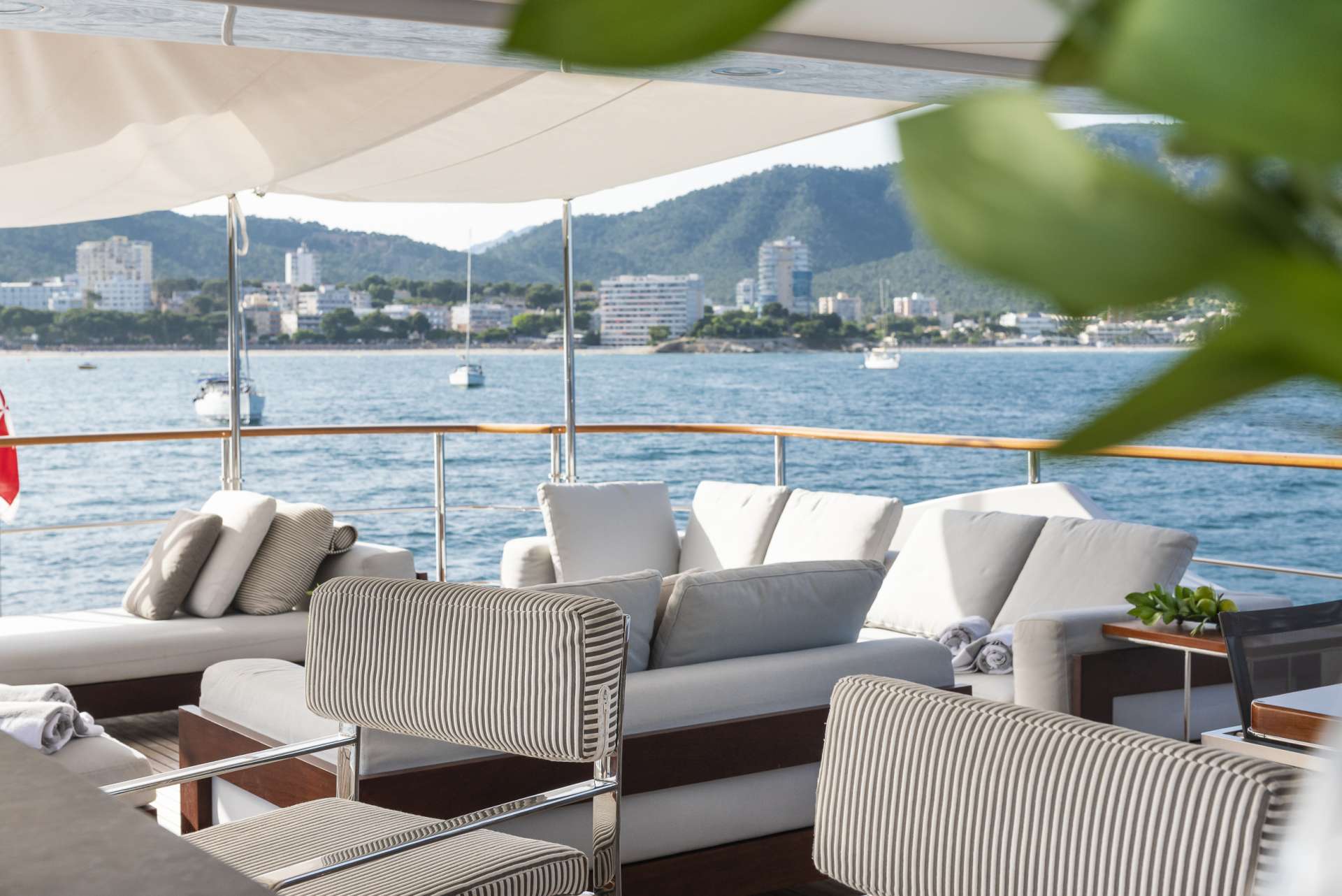 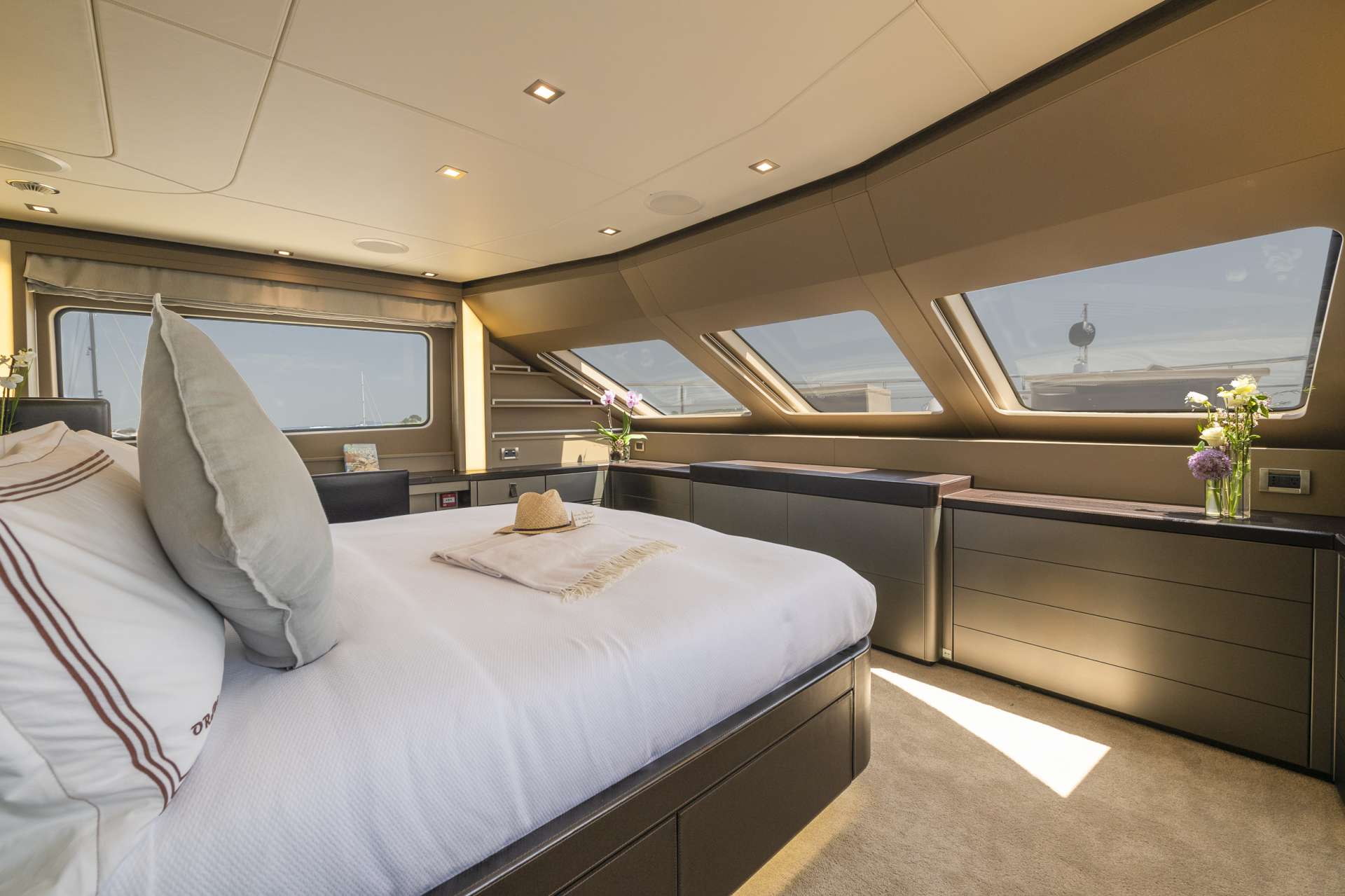 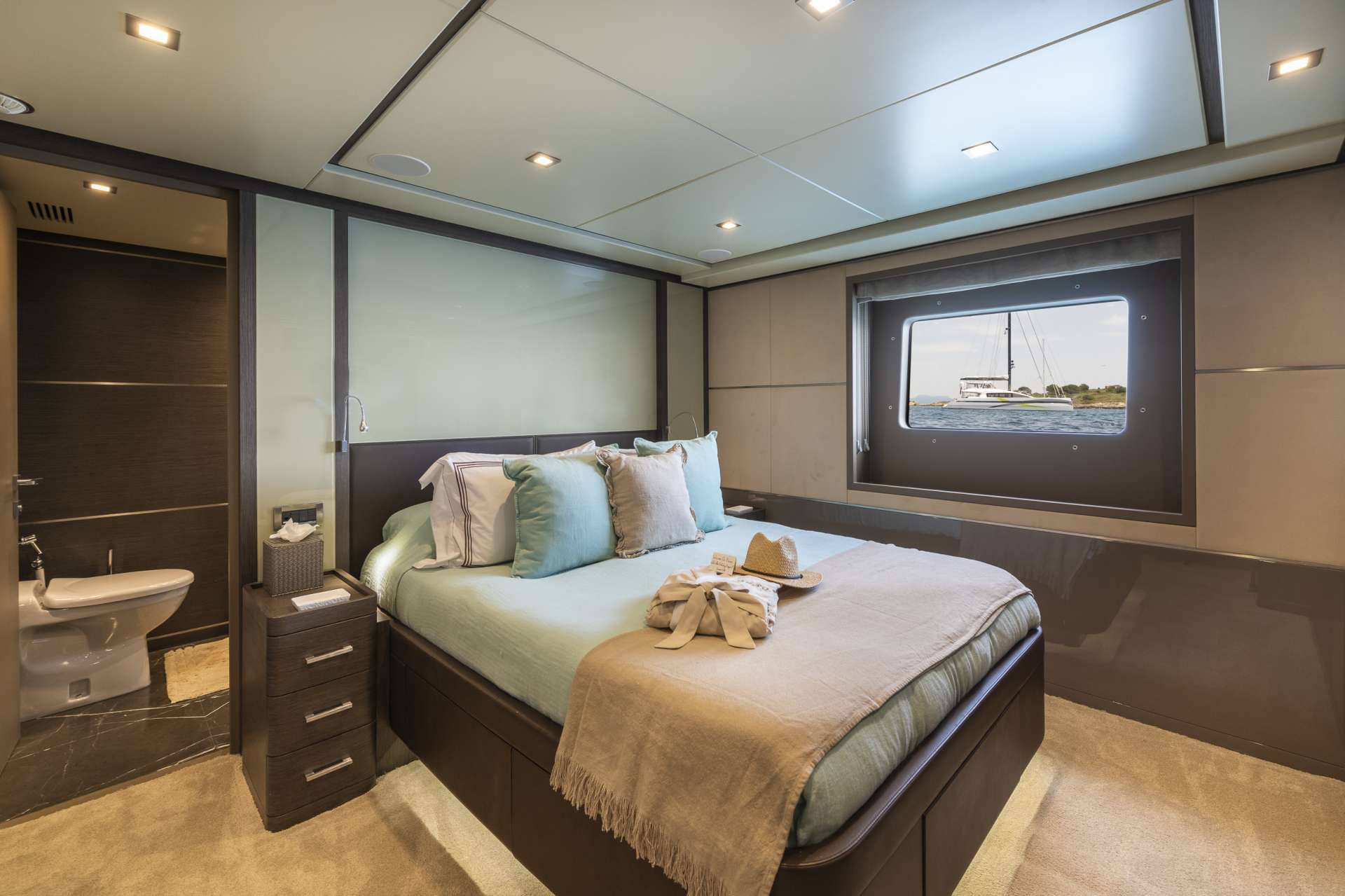 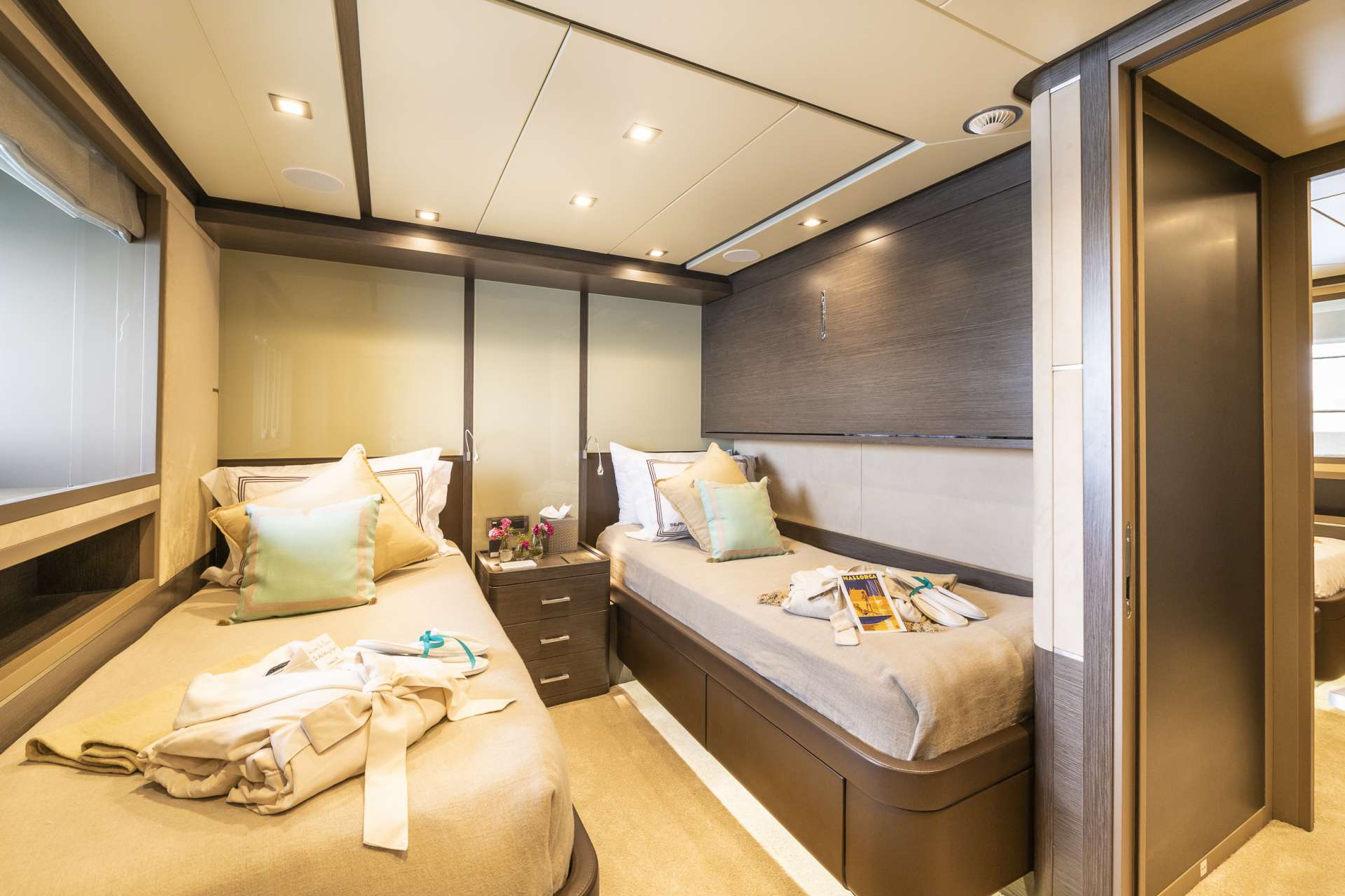 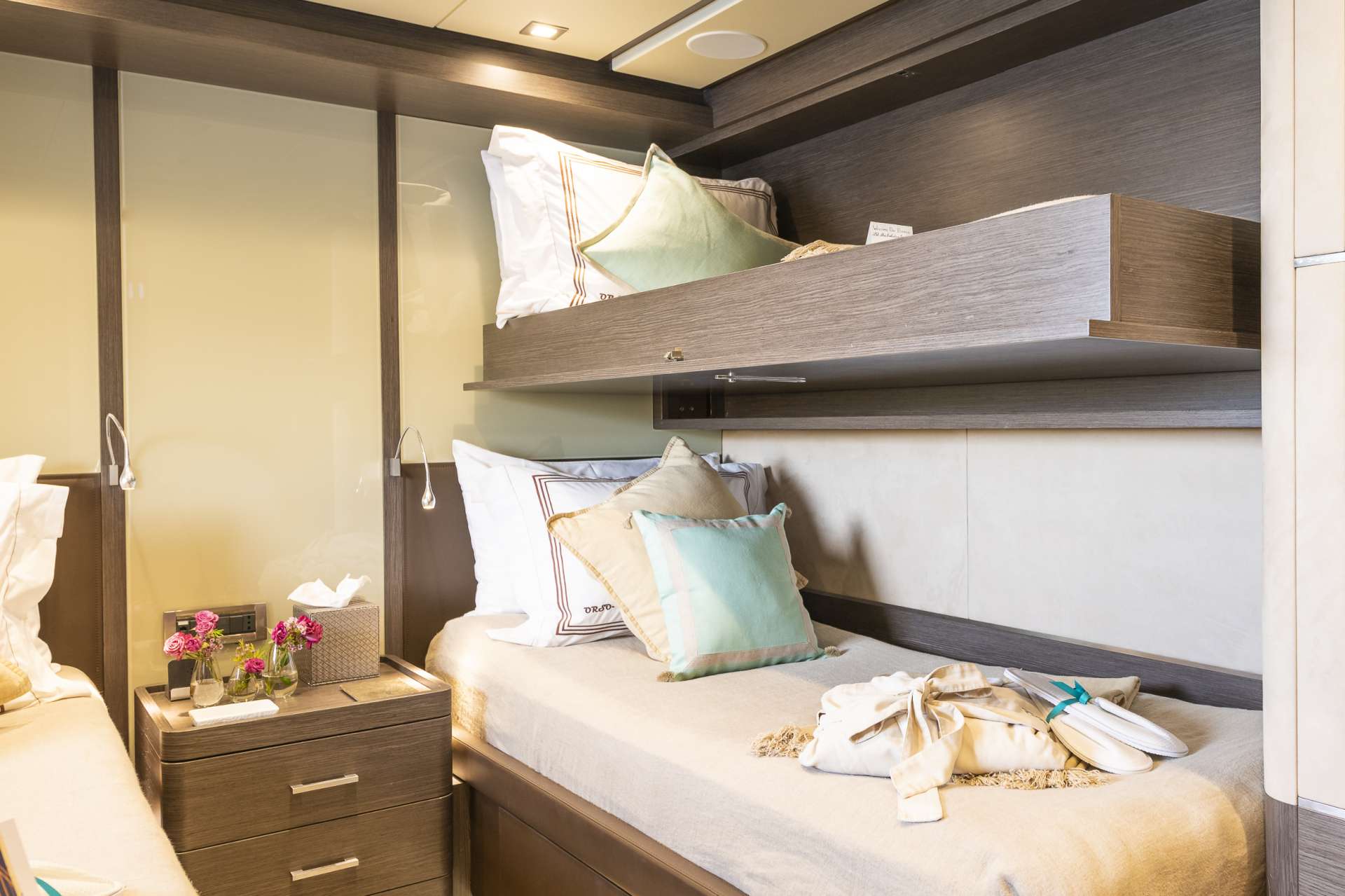 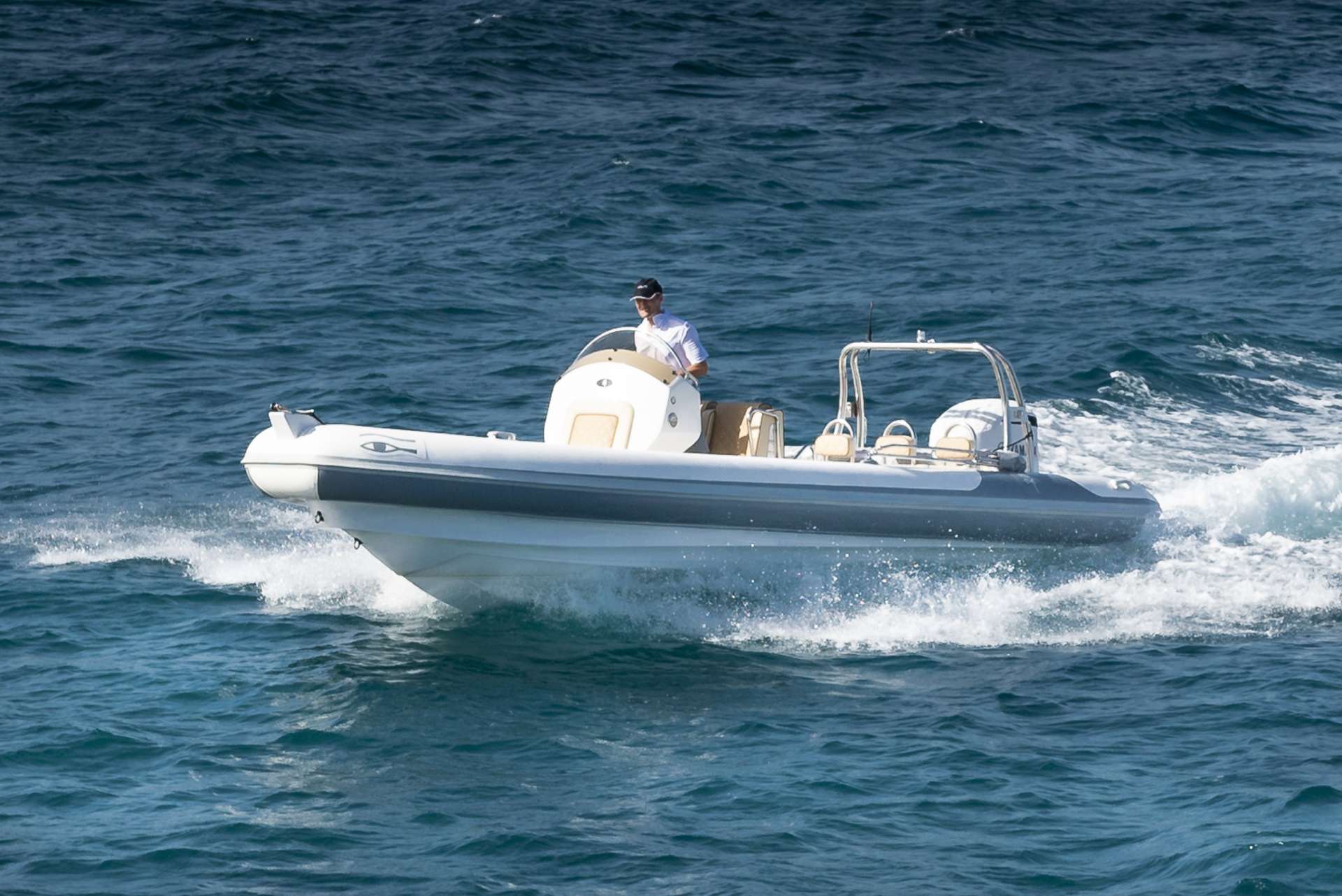 The full beam master cabin is located on the main deck with panoramic windows overlooking the forward deck, a walk in wardrobe and vanity unit. The master en suite features fine Italian marble, his and her sinks and a spacious shower.
On the lower deck you will find an additional 4 guest cabins consisting of two double cabins and two convertible twin cabins with pullman beds, allowing a further two guests onboard. The pullman beds are suitable for children or small teens. Orso 3 CANNOT accommodate 12 ADULT guests.

Other Entertainment: Integrated audio-visual system is on board with smart television screens in each cabin and the main salon.
6 x Samsung Smart TVs (42″, 32″ or 23″)
IPTV onboard with Netflix and Sky Euro

Having grown up by the sea it was always Sam’s desire to build a career around boats. At the age of 16 Sam joined the Lifeboat Service in the UK shortly followed by Britannia Royal Naval College in Dartmouth where he started his training to become a Navy Warfare Officer.

After serving time on several aircraft carriers and destroyers, Sam began specialist training to become a Nuclear Submarine Navigation Officer. After a 10- year rewarding career with the Royal Navy Sam made the move over to the yachting industry.

Working through the yachting industry at a fast pace, Sam has held several Captain positions along with working as a yacht master instructor training new crew to the industry.

One of Sam’s biggest achievements was successfully gaining his MCA Master 3000GT certificate. Sam will ensure your stay onboard is both luxurious and memorable.

When not working, you can find Sam on a mountain top snowboarding, or jumping out of planes skydiving.

Growing up in Brazil cooking with her Italian and Spanish grandmothers using only the freshest produce from their farm sparked her interest in becoming a professional chef.
Andrea has a culinary degree in cooking from “Food and Wine Academy Gambero Rosso” and has spent time working as a sous-chef in Sardinia.

Andrea has been travelling extensively and has been inspired by new flavours and cooking styles especially in Asia where she completed several cooking courses.

Andrea has been on board Orso 3 for over 2 years and will continue to impress guests with her culinary delights.

In her spare time, Andrea loves to Sail, Travel, and practices Diving. She has always had a passion for food and cooking.

Carla has many years of hospitality experience and has been working on yachts of various sizes since 2011, including Icon, Kibo, Seaflower and Fountainhead. With a keen eye for detail and excellent service skills Carla will ensure your time on Orso 3 is nothing but amazing.

In her spare time Carla enjoys Yoga, SUP Yoga, kettlebell workouts and swimming. She is passionate about community projects and loves volunteering during her holidays.

Carla also likes video editing, meditating and learning Spanish. She is very down to earth, happy go lucky and fun.

Describing herself as confident, honest, hardworking and intuitive, her 4 years of yachting experience makes Macushla an accomplished chief stewardess and key team player.

Originally from South Africa, Macushla grew up with an acute awareness of the outdoors and the sea, learning skills that today, are an example of her capacities.

Her spare time activities range from everything from cooking to animal welfare and interior design – proof that Macushla considers her down time as seriously as her on board duties!

Jeremy’s love for travel initially found him delivering catamarans around the world to their new owners, but quickly progressed and before long he found the world of yachting was the career choice that suited him.

Determined and focused by nature, Jeremy intends working his way up the ladder to take command of a yacht as captain one day.

Meanwhile, Jeremy’s spare time interests are incredibly land based and include golf and football !

June is the ultimate all-round crew member! Joining the yachting industry in 2018 with the experience of upscale hospitality in 5 star resorts, she already knew she had what it takes to fill the profile, so when she joined M/Y Bliss in the Caribbean as 2nd stewardess she felt right “at home.”

From there she has held positions as Deck/Stew – 2nd Stew, and Deckhand on various yachts and covered vast cruising grounds too. In addition to this June is a 200 hour certified Yoga Instructor and is proficient in tender and jet ski driving!

Philip grew up by the ocean in the picturesque Garden Route region of South Africa. He has always been mechanically minded, so, once his education was behind him, his transition into the yachting industry was no surprise for those that knew him.

Naturally passionate about surfing, fishing, underwater photography, and anything to do with water, Philip runs a tight schedule when it comes to free time hobbies and activities. 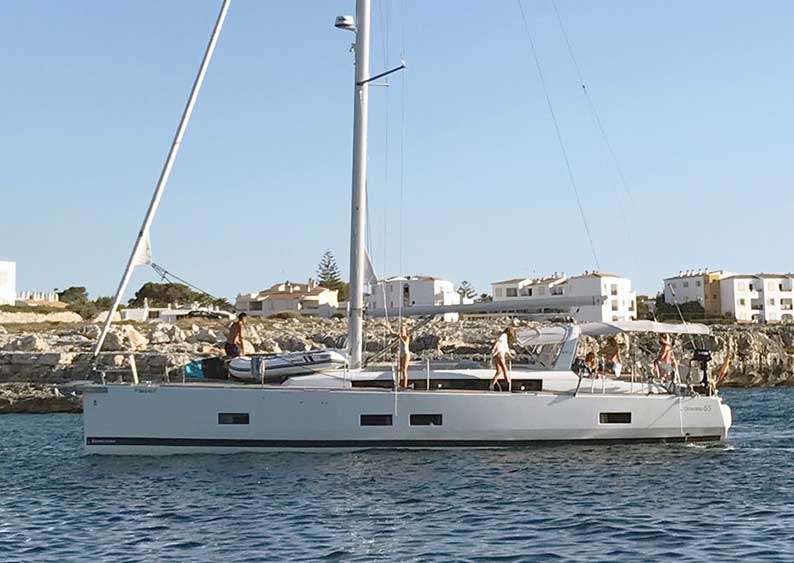 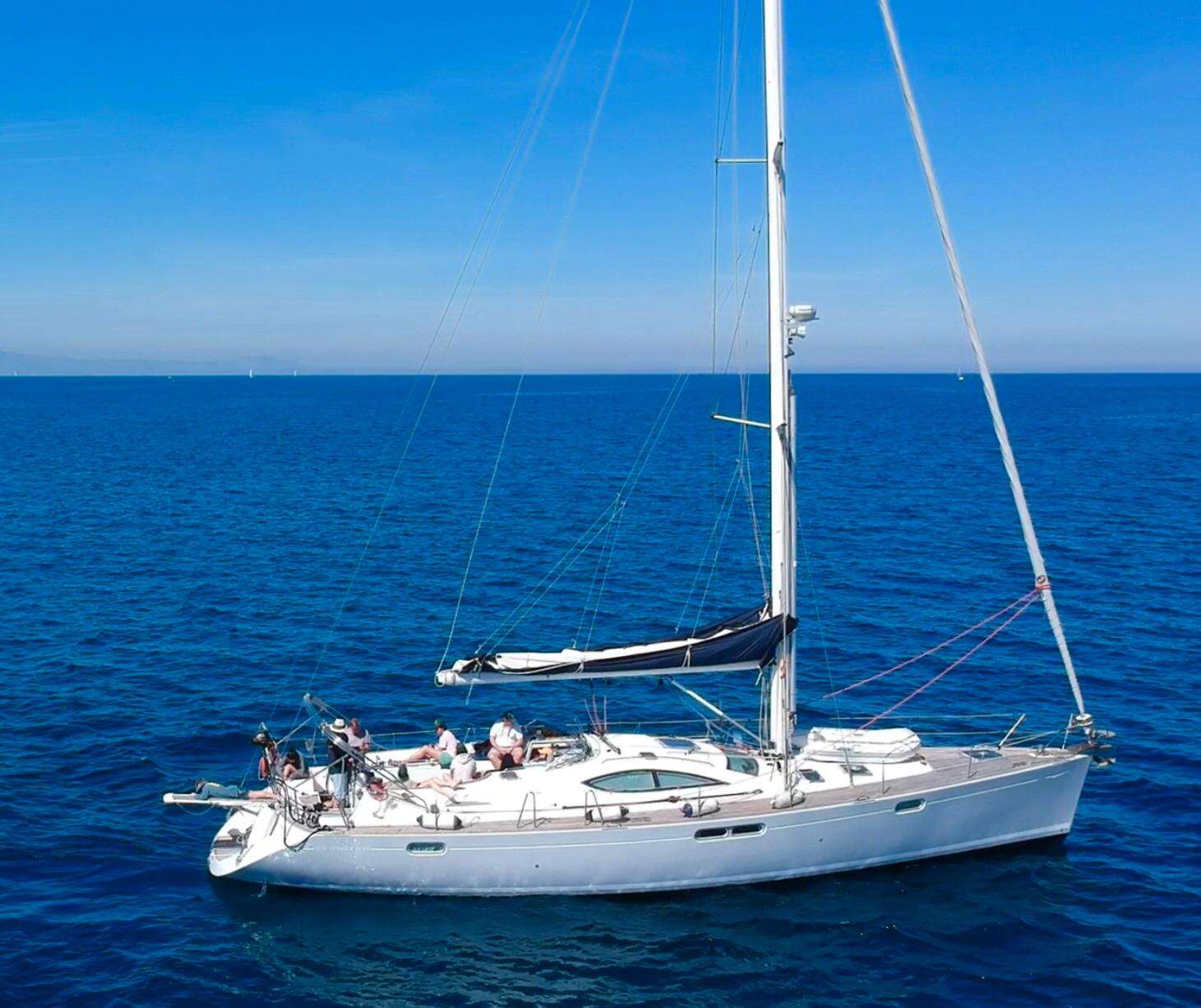