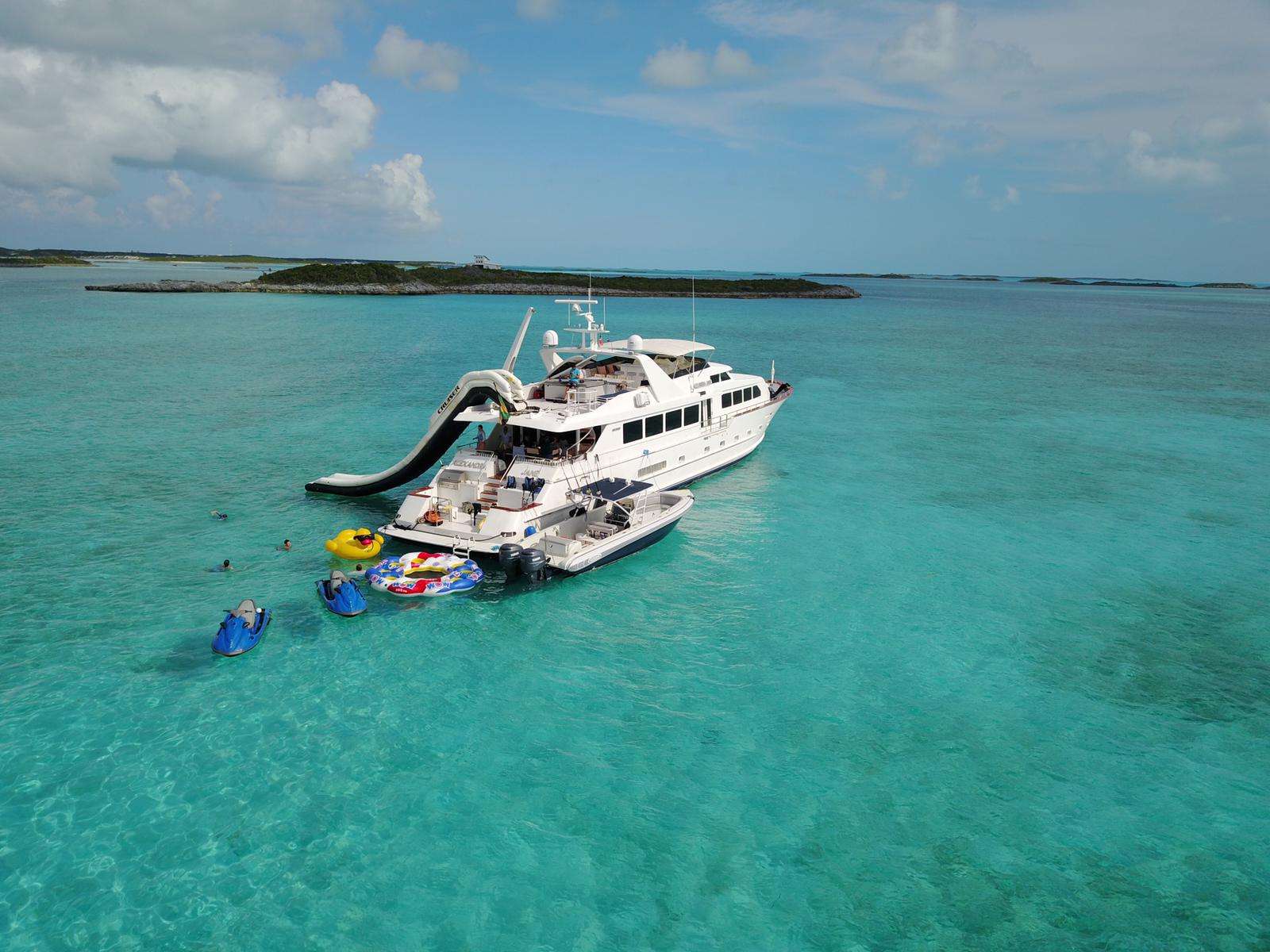 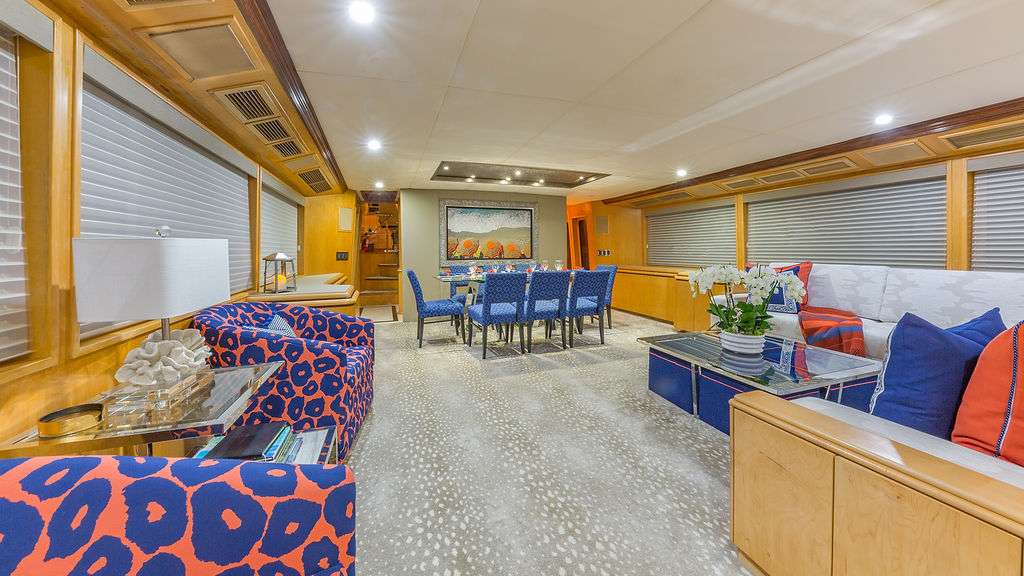 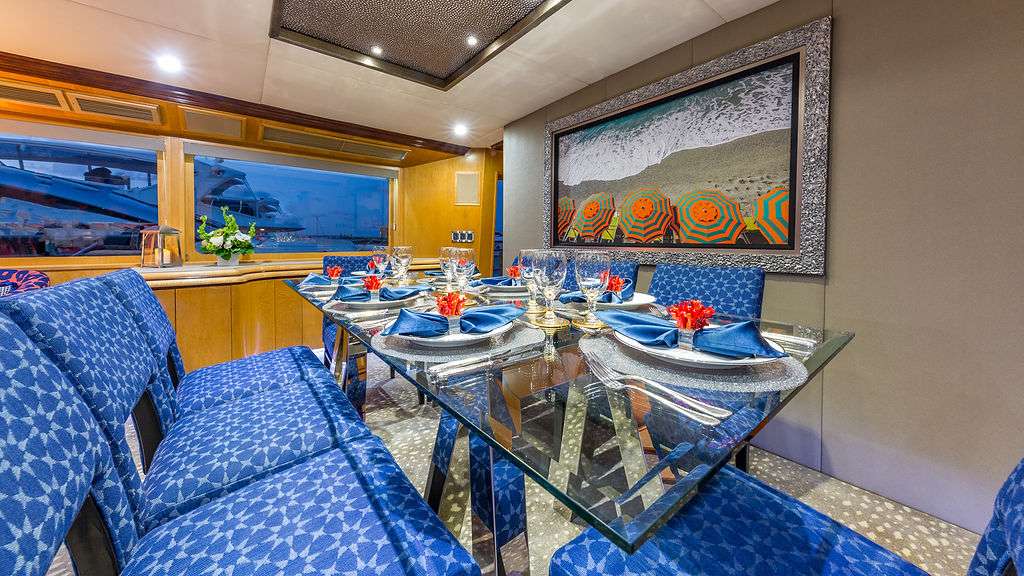 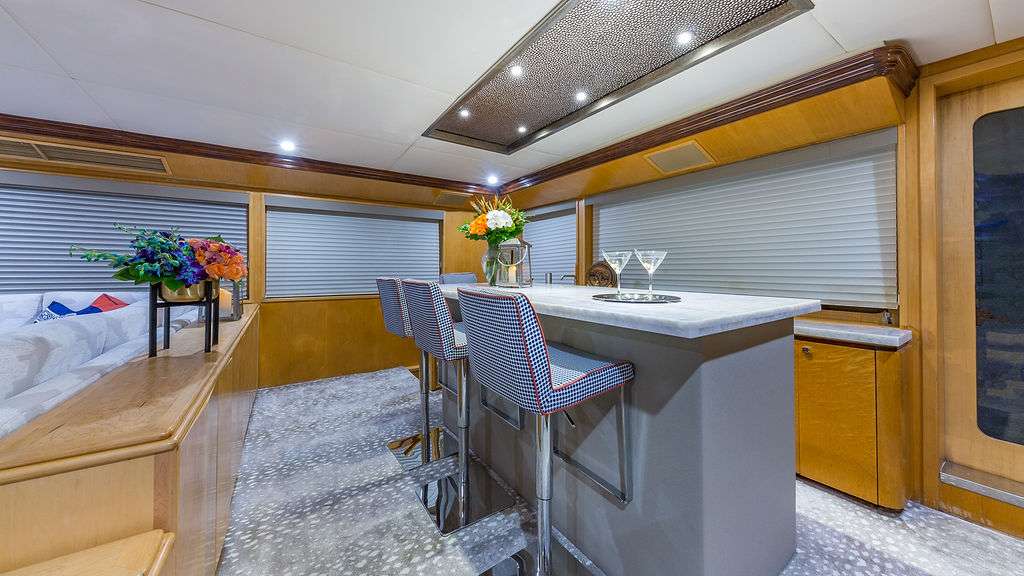 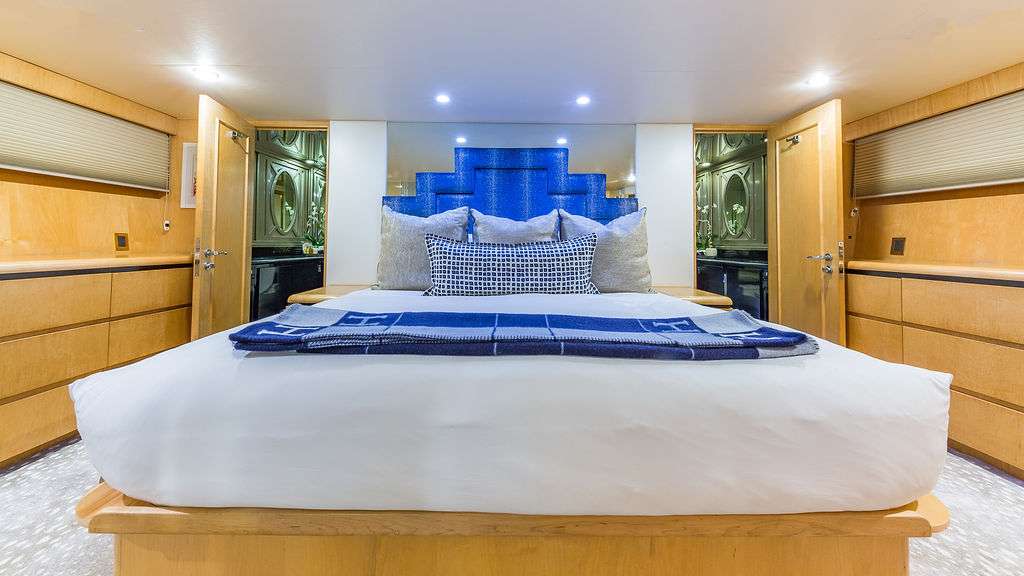 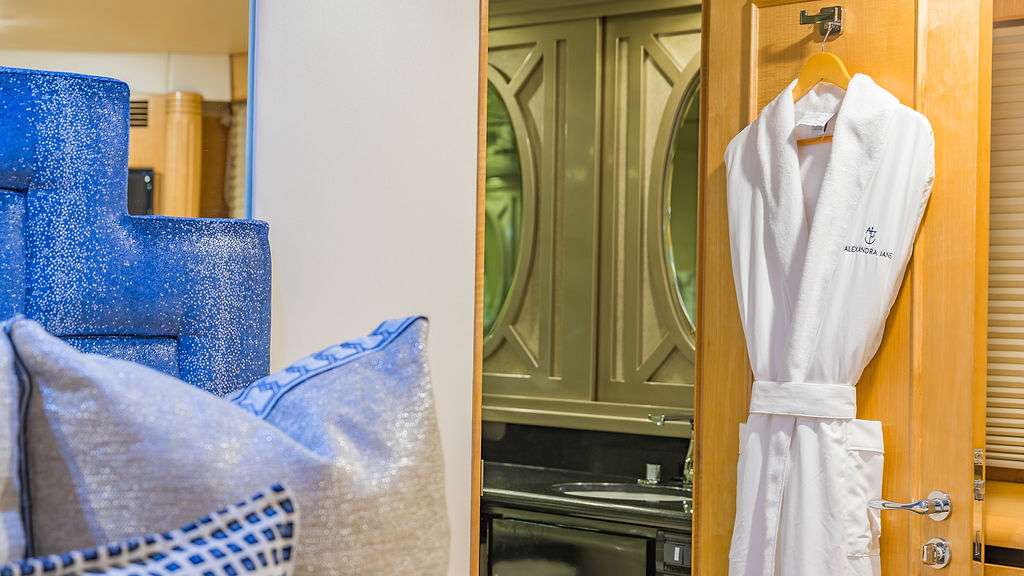 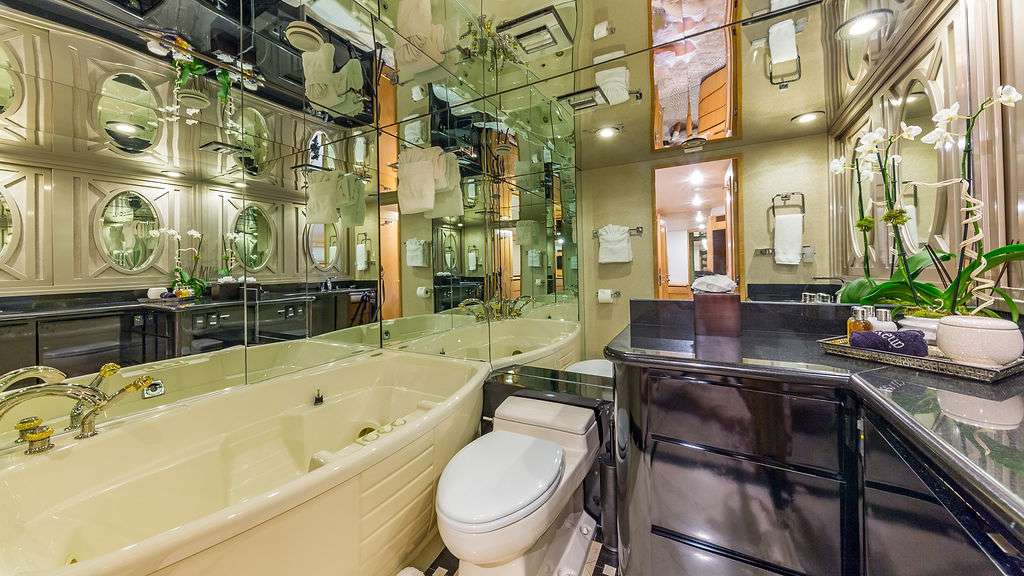 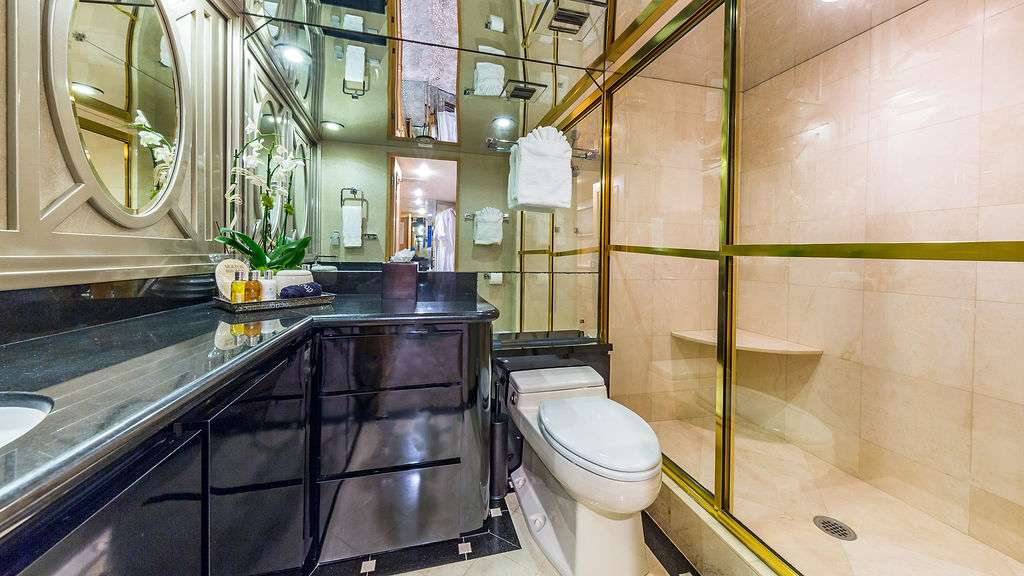 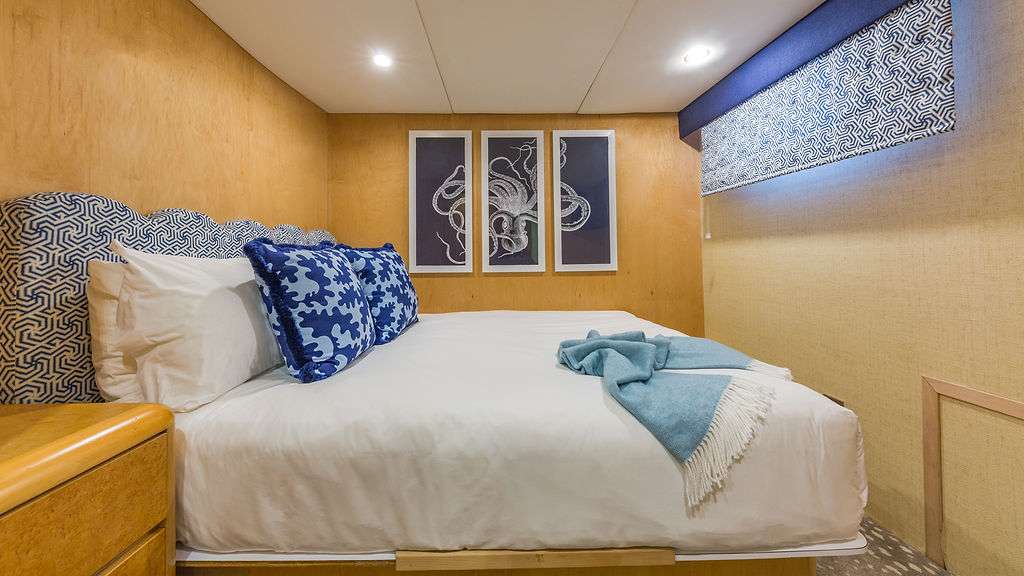 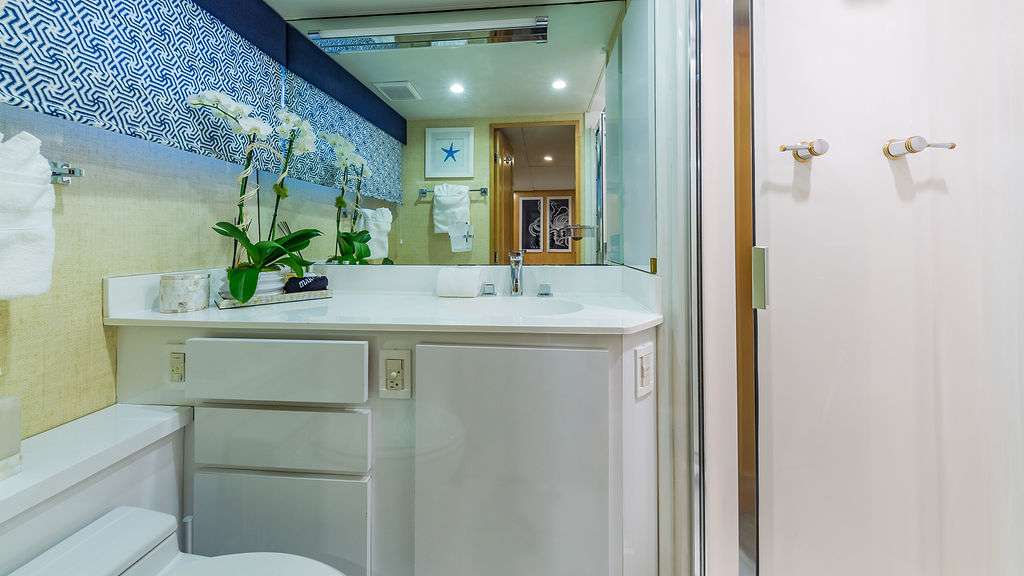 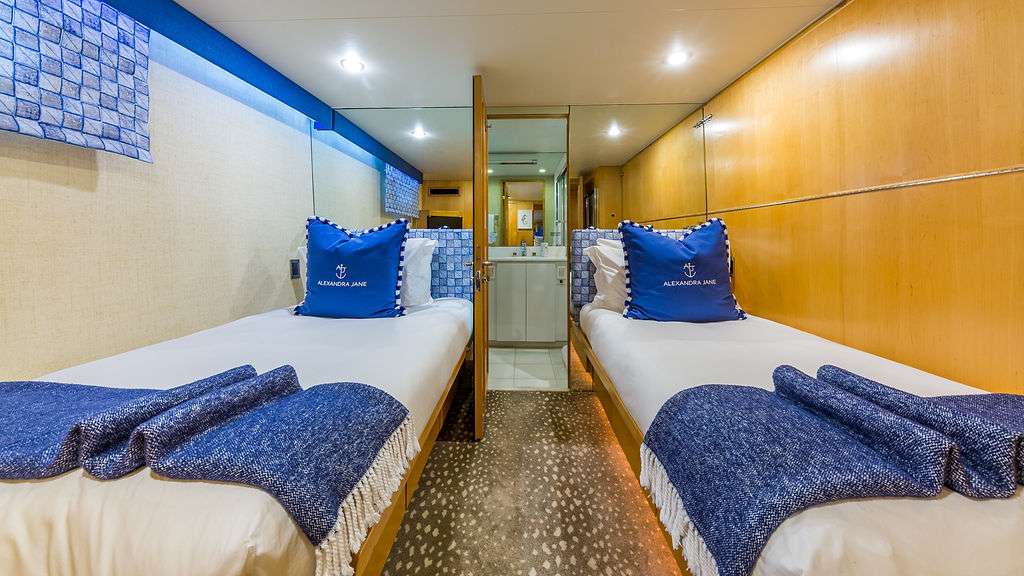 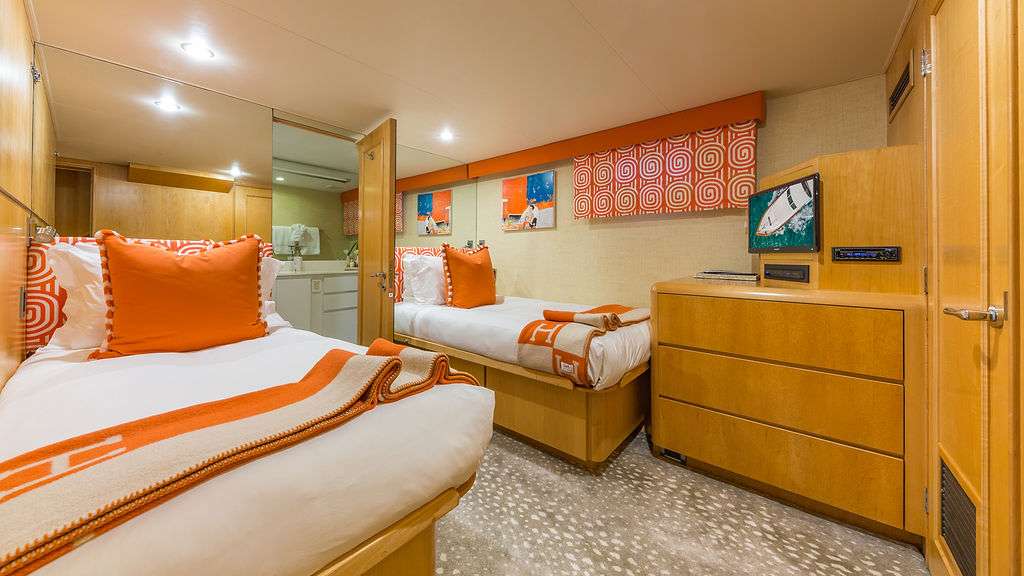 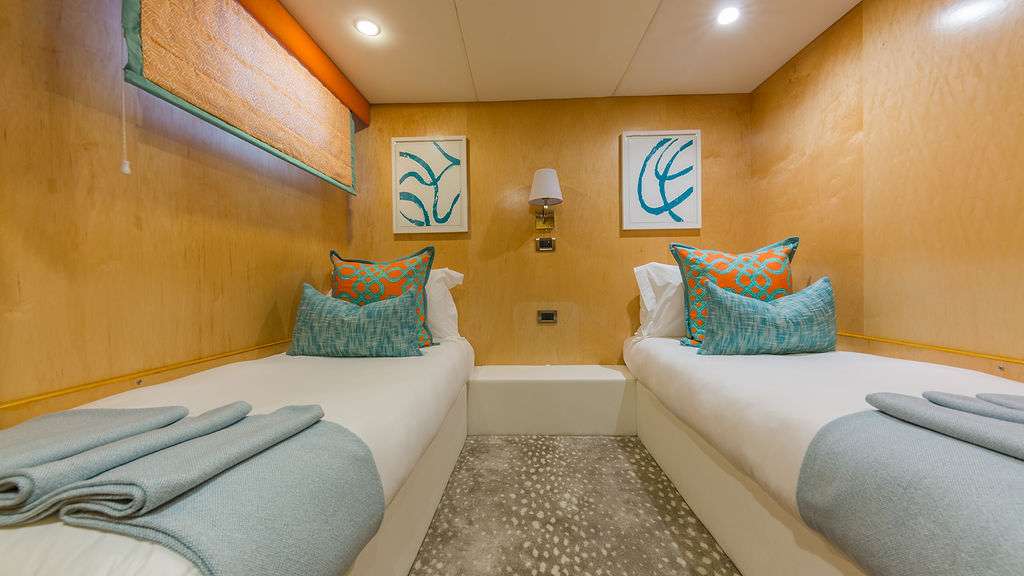 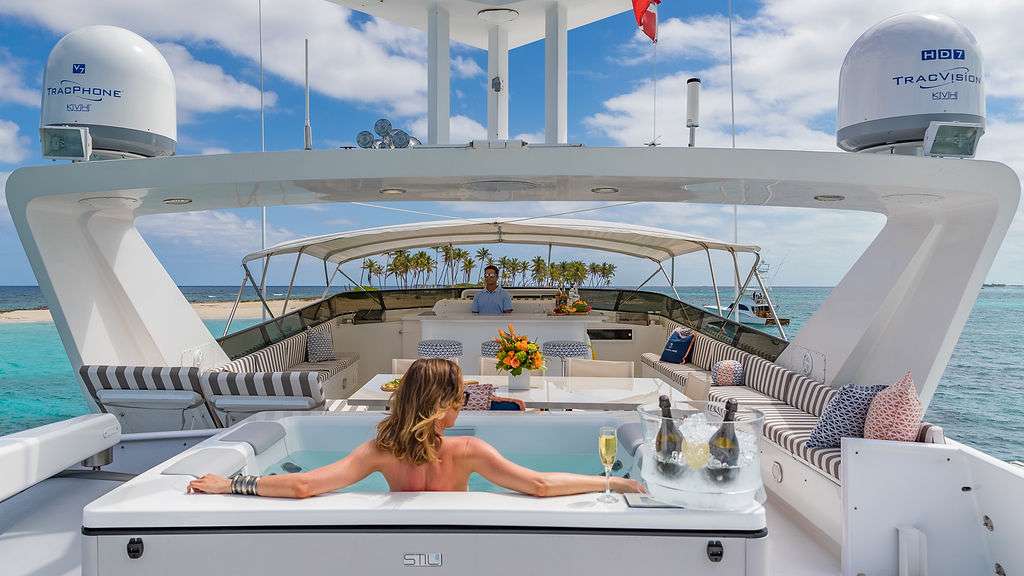 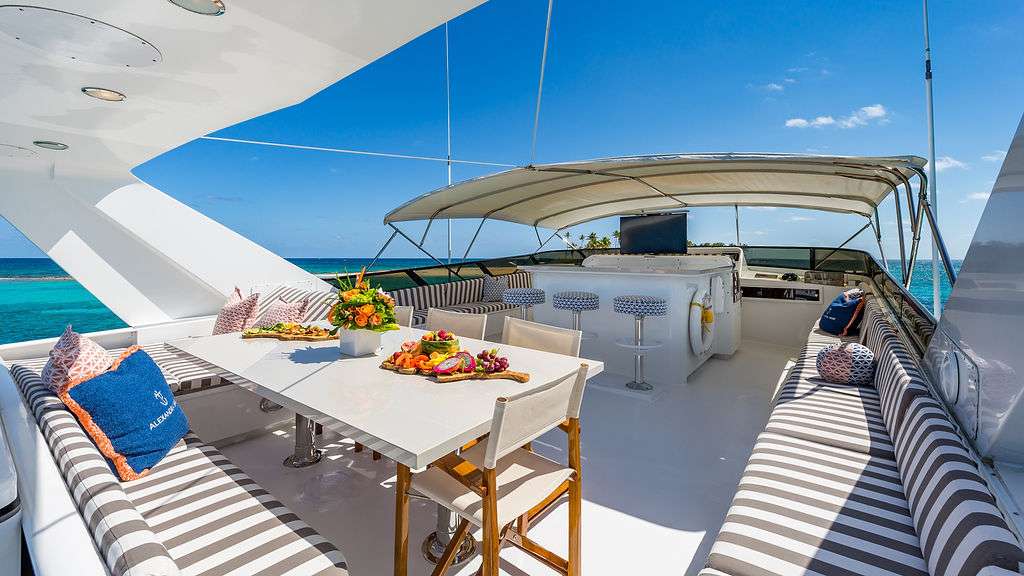 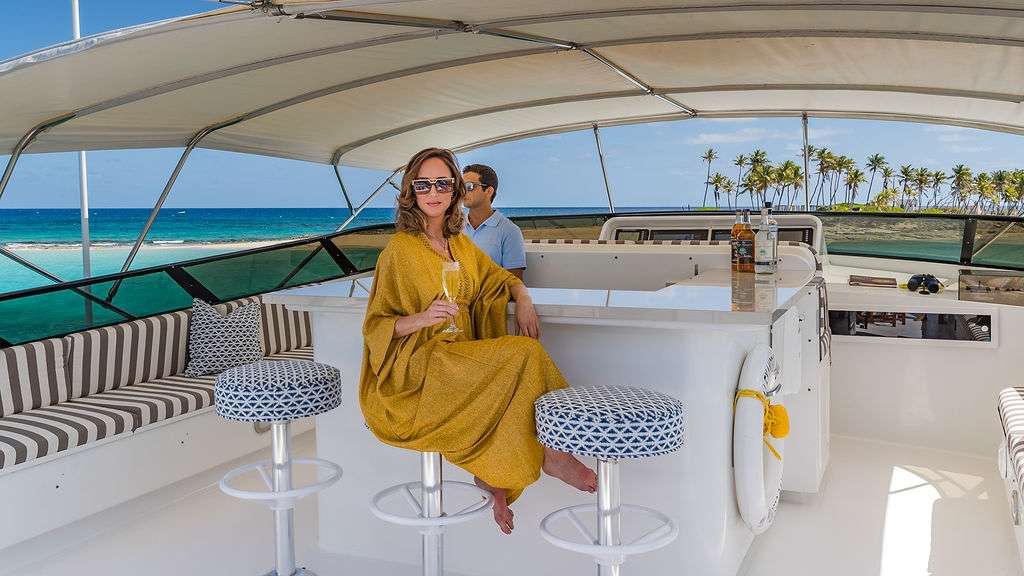 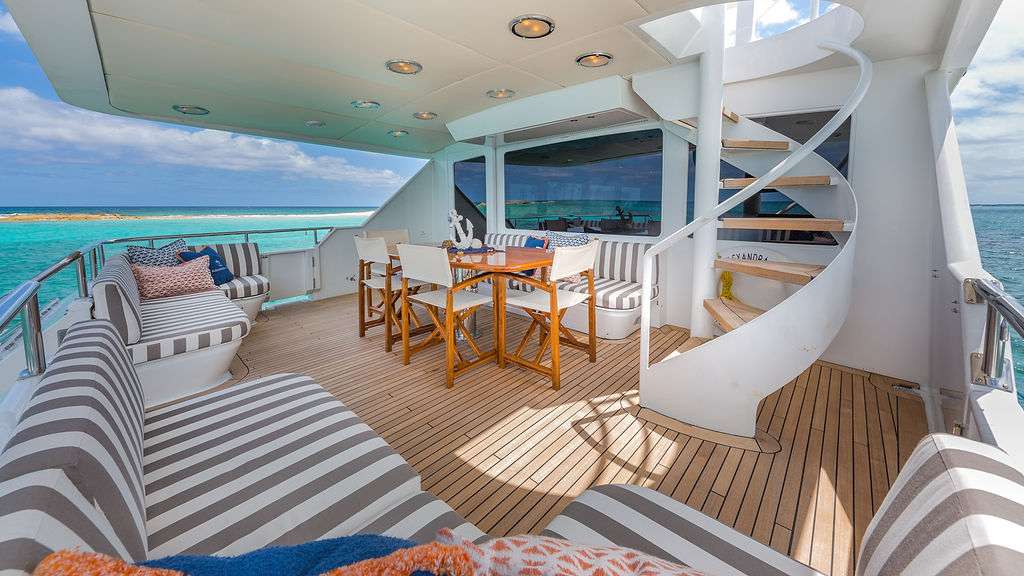 Master Stateroom- has a king berth and separate his and her heads. His head has a stall shower while her head has a Jacuzzi tub. There is a large walk-in wardrobe.

Port and Starboard Guest Staterooms- each have twin beds, and ensuite head with shower. 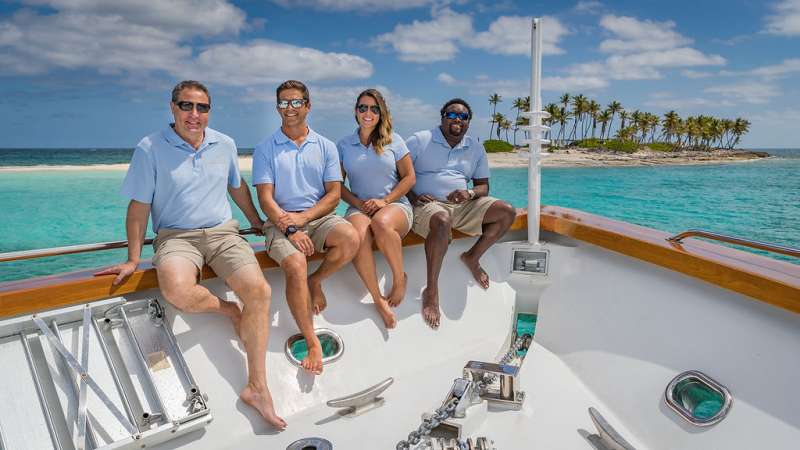 Captain Duran Stuart, who is a native of the Bahamas, has over eight years’ experience in the yachting industry. After receiving his high school diploma from Queens College in Nassau, he enrolled in the Chapman School of Seamanship, located in Stuarts, Florida. The school prepared him for his career by offering classes in theory and hands-on experience related to boating. Classes included rules of the road, Marlinspike, weather, first aid/CPR, boat handling, piloting, dead reckoning, electronic navigation, and boat and engine maintenance. After 369 hours of study, Duran graduated in September of 2005 with his Professional Mariner Diploma.

Duran formally began his yachting career as a mate aboard a 92-foot luxury motor yacht, but quickly learned the ropes was promoted to the role of captain after obtaining over 2300 hours logged in navigating and piloting and being part of three different crews. He has worked aboard both private and charter yachts and has traveled throughout south Florida and the Bahamas as well as making vessel deliveries up the northeastern United States.

Captain Duran has a friendly personality and a passion for ensuring the safety and comfort of his guests. His focus for each charter is the satisfaction of those on board, and he will always go out of his way to help create the best vacation possible. Personally, he enjoys deep sea and reef fishing and loves sharing his favorite spots for the best catch. Duran looks forward to welcoming his guests aboard Yacht Alexandra Jane and doing all he can to ensure that everyone has a fun and memorable yacht charter vacation.

Stephanie Branning was raised in a beach town in Puntarenas, a Costa Rican province located on the Pacific Coast, where she spent her childhood playing in the waves and sand. In May of 2017, she left the corporate world behind, and her love for people and passion for excellence set her on a new career path in the yachting industry. She worked aboard M/Y The Program as sole stewardess, completing 10 charters in The Bahamas in addition to several trips with the yacht’s owner. In her leisure time, Stephanie enjoys tying fresh and saltwater flies, snorkelling, and indulging in a peaceful sunny day at the beach. No matter where she travels, her home in Costa Rica is always in her heart.

John Spooner is originally from Oxford, England, but the Bahamas is what he calls home. He lived in the South of France for 15 years while studying the art of French Classical and Italian cuisines. He has also completed 7-years in sushi training. Has been in the yachting industry for 15 years, and owns a bar in the Bahamas. John has traveled and worked extensively in Europe, including Croatia and 3 years in Denmark. John is capable of doing anything from catching and preparing your fish of the day, to cooking hamburgers on the grill, to formal French classical.

First Mate Michael Levdansky hails from Salisbury, Maryland. Growing up on the U.S. East Coast, Michael learned to love life on the water. After high school, he entered his USCG recruit training then USCG boatswain Mate “A” school, where he received qualifications in search-and-rescue fundamentals and his Officer of Watch license. He
then obtained his captain 100-ton license in Fort Lauderdale, Florida. Michael has three years of yachting experience on charter yachts, including PRESTIGE LADY and SUMMER SPLENDOR He is extremely passionate about his career and takes pride in all he does; he boasts a keen work ethic and is an exceptional member of the ALEXANDRA JANE team. Michael’s hobbies include fishing, surfing and diving, all of which he enjoys sharing with guests during their time on board the yacht. He is dedicated to providing guests with a once-in-a-lifetime experience on the water.