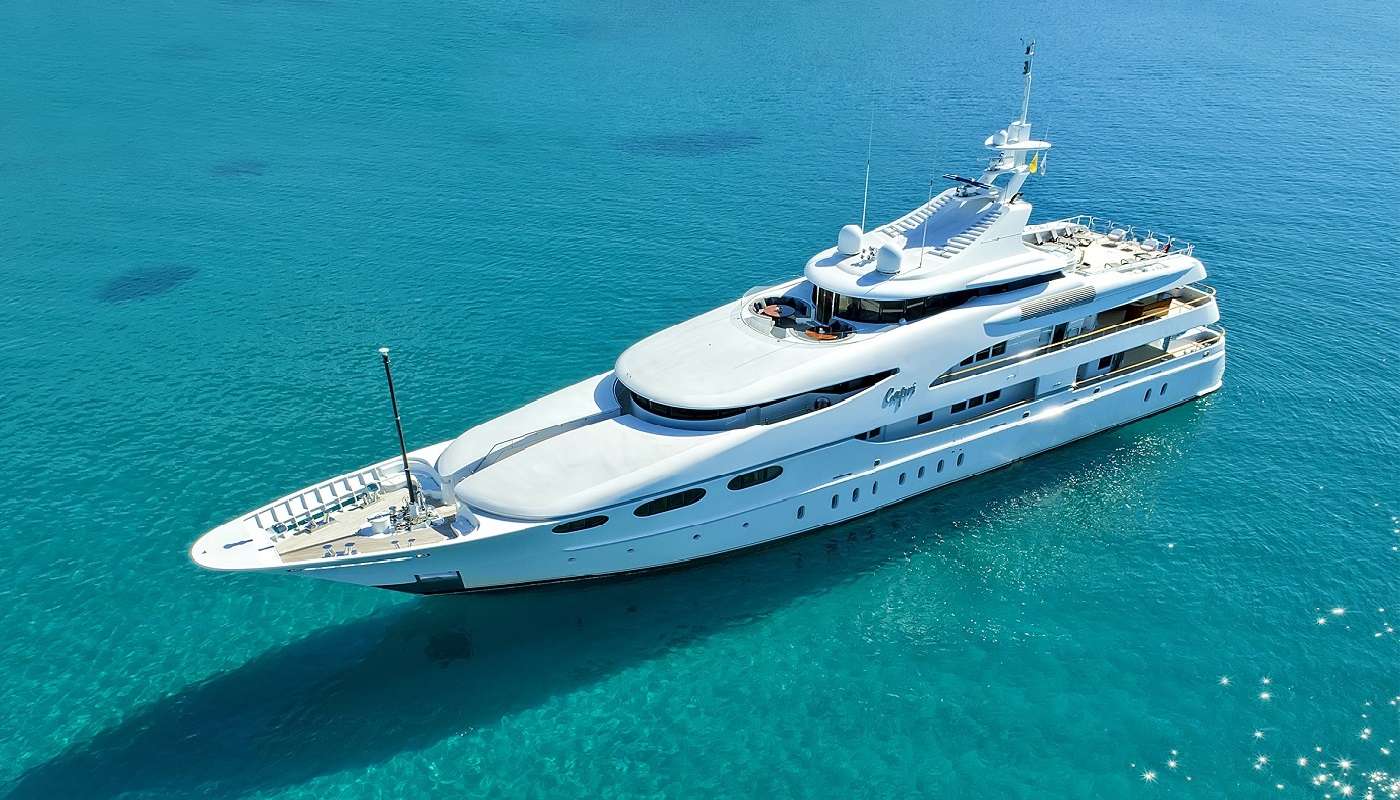 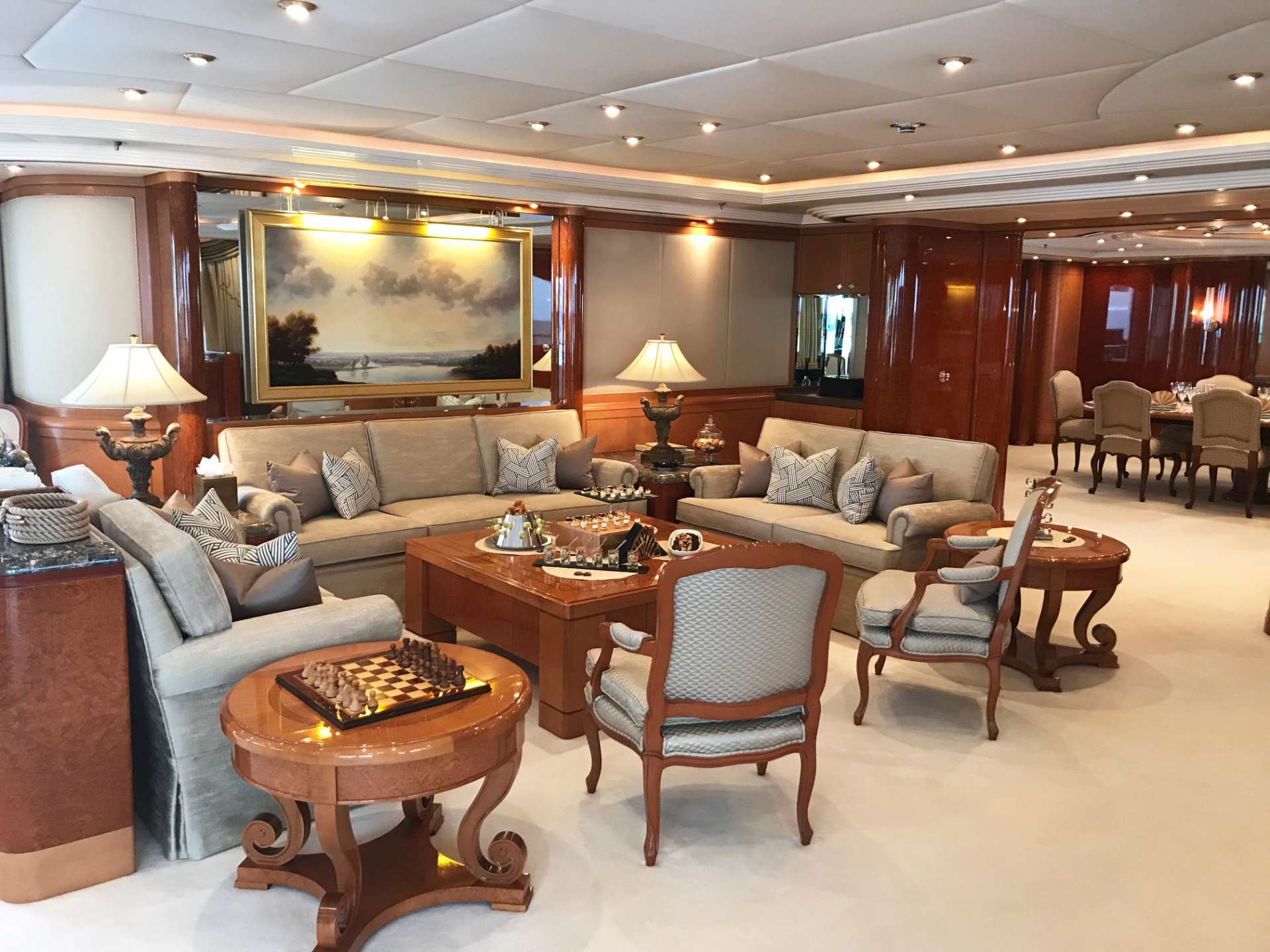 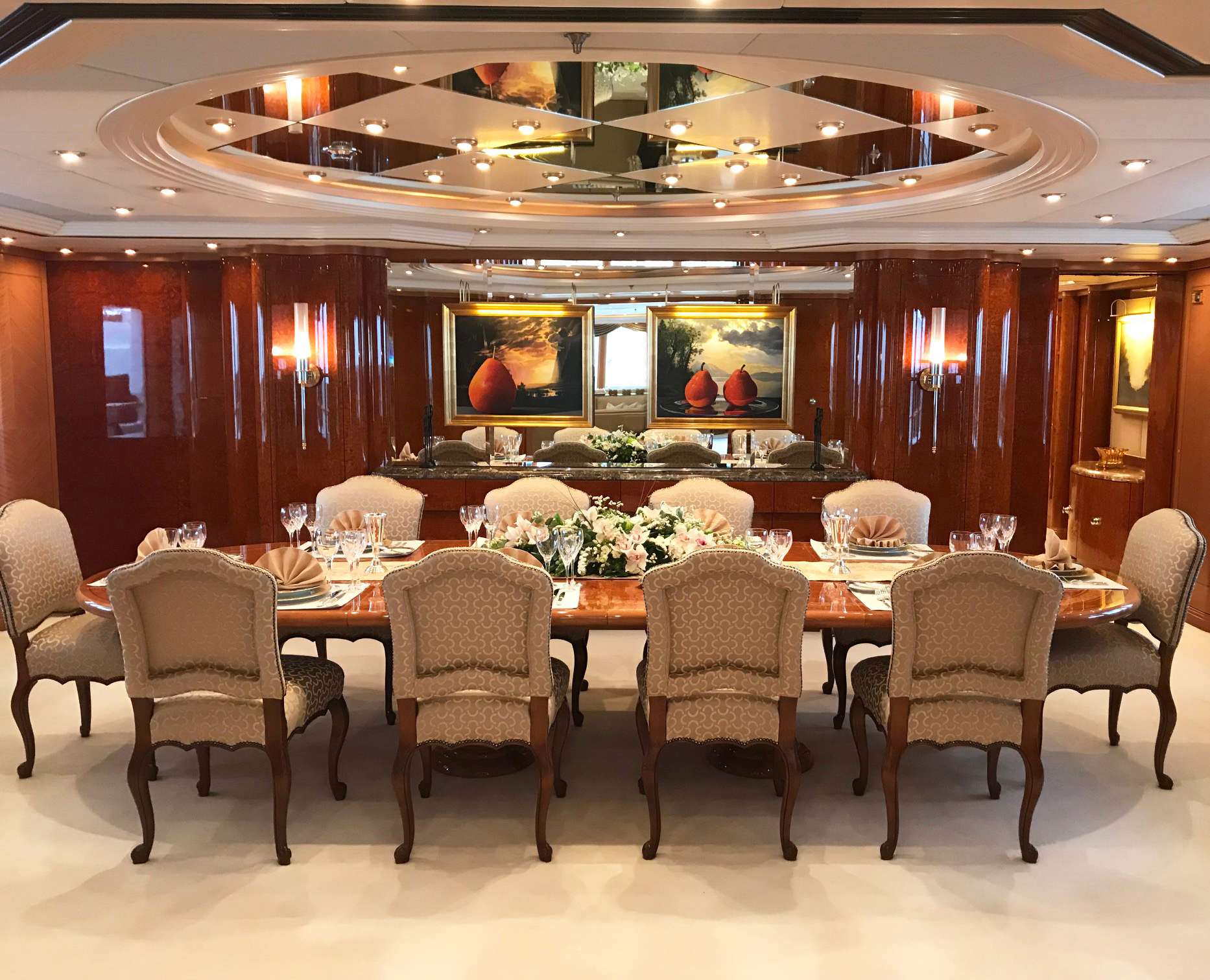 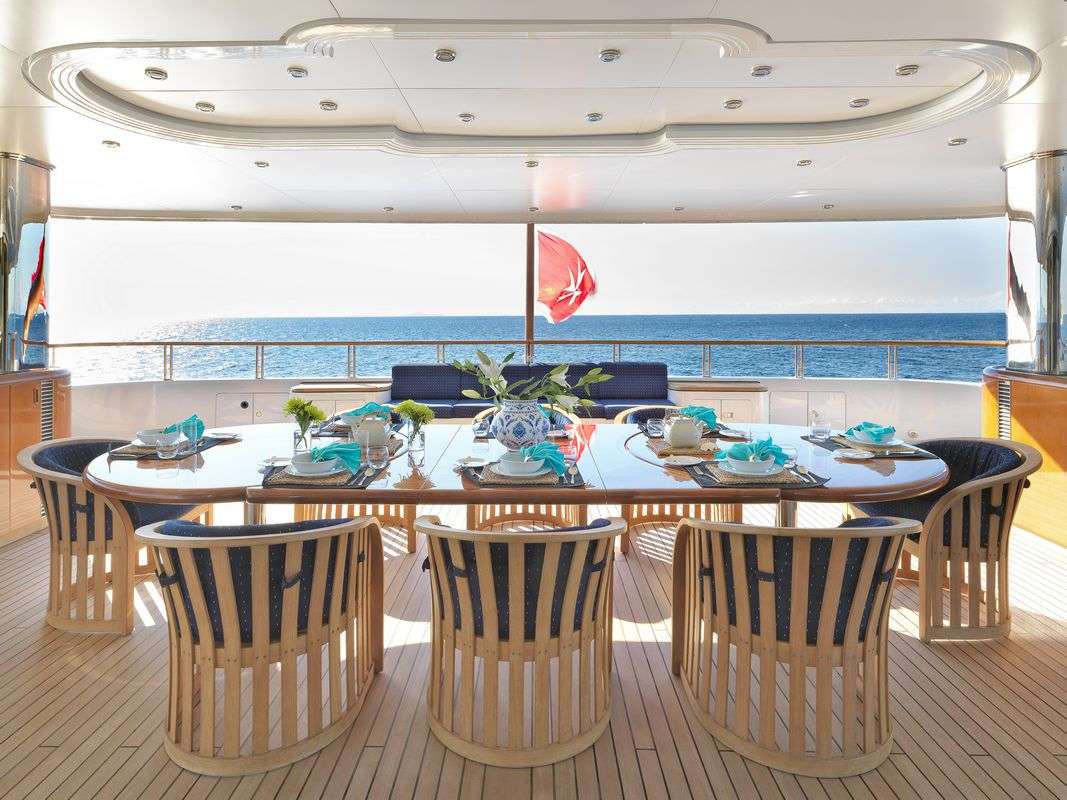 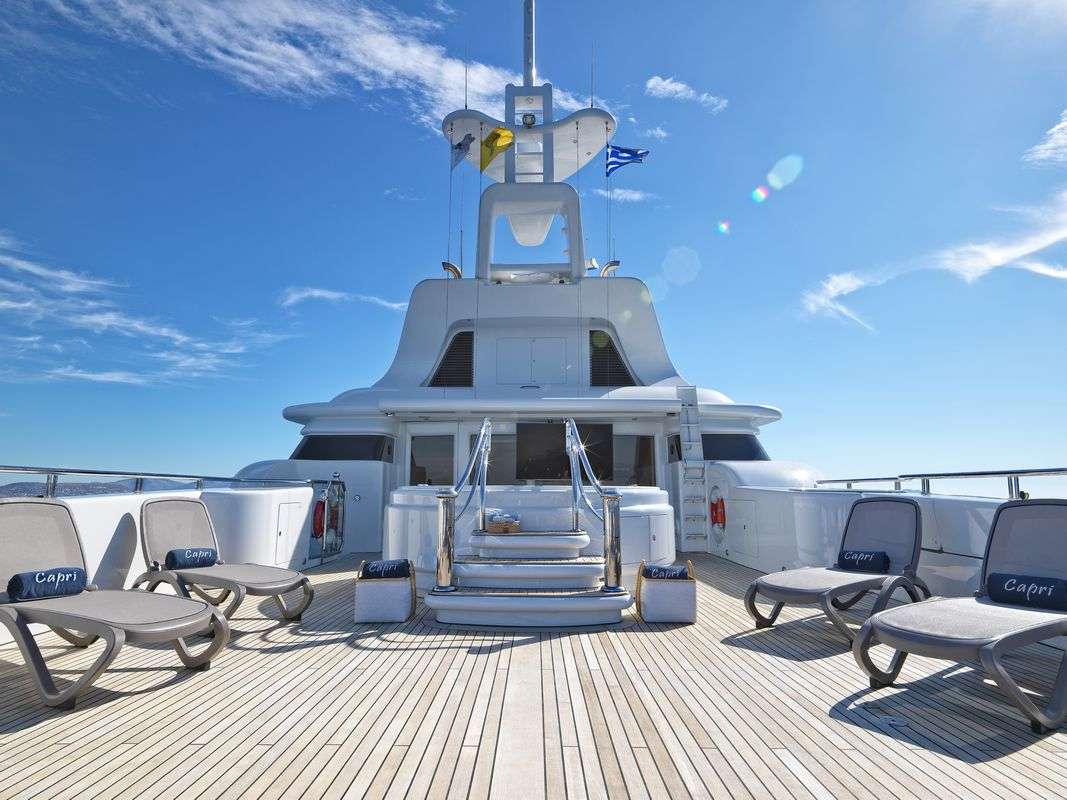 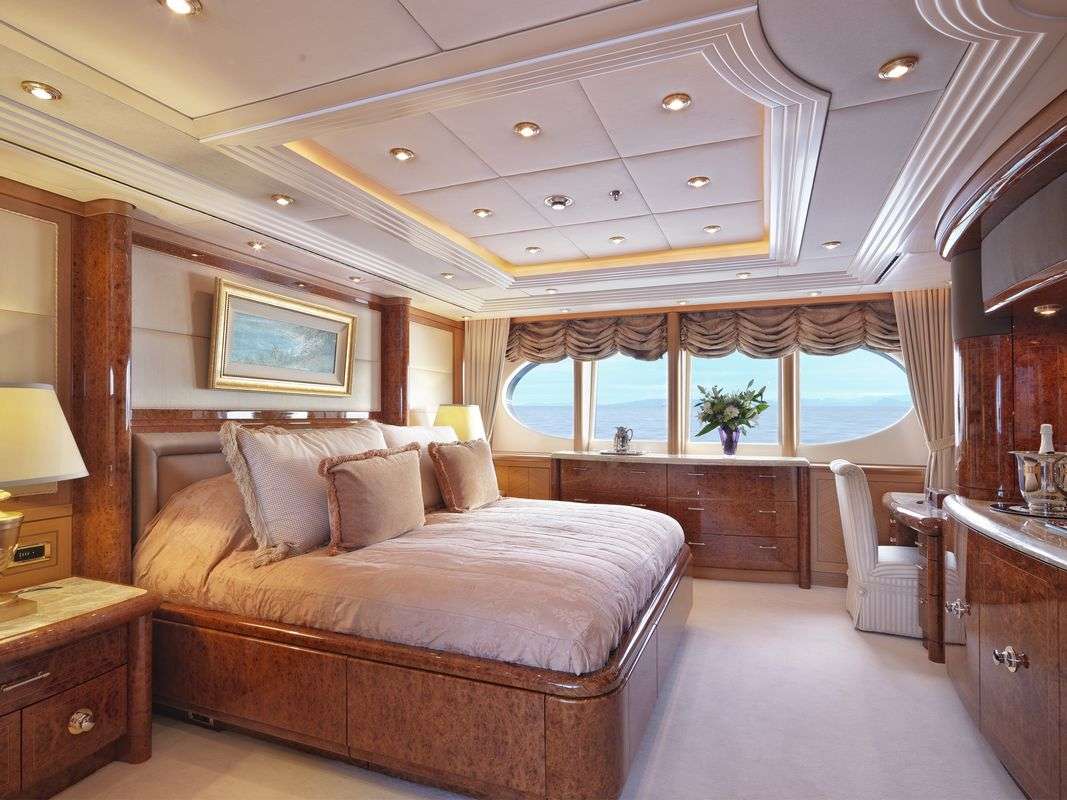 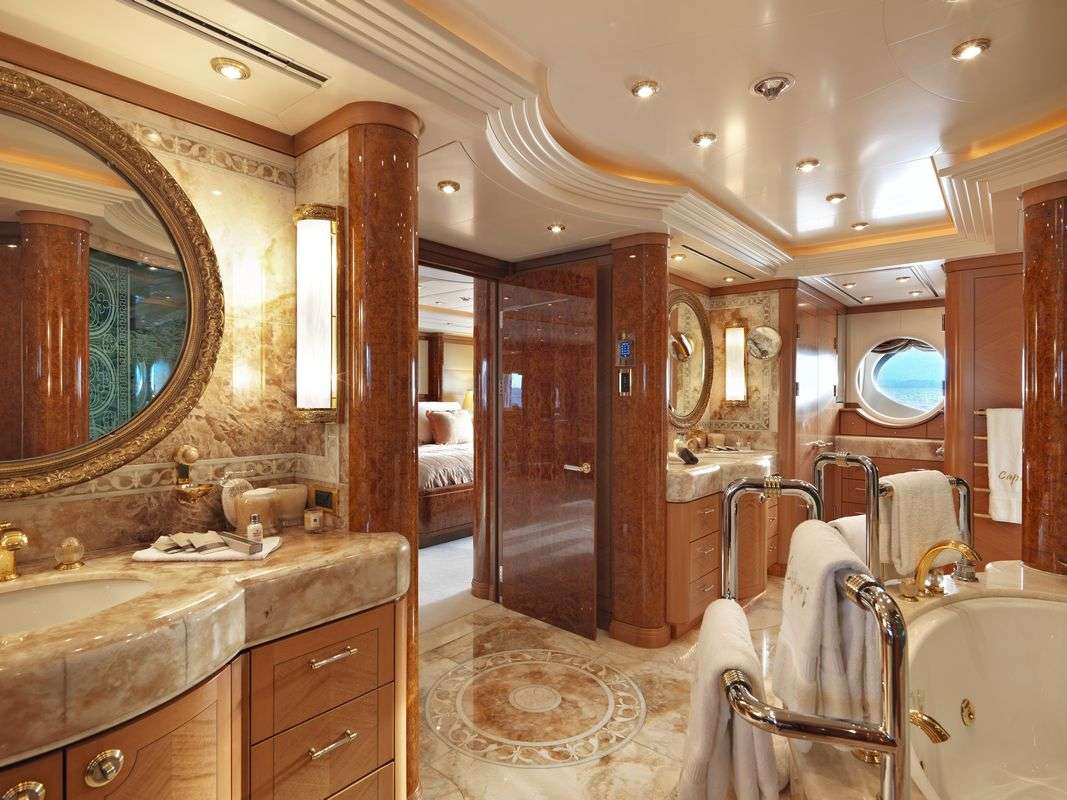 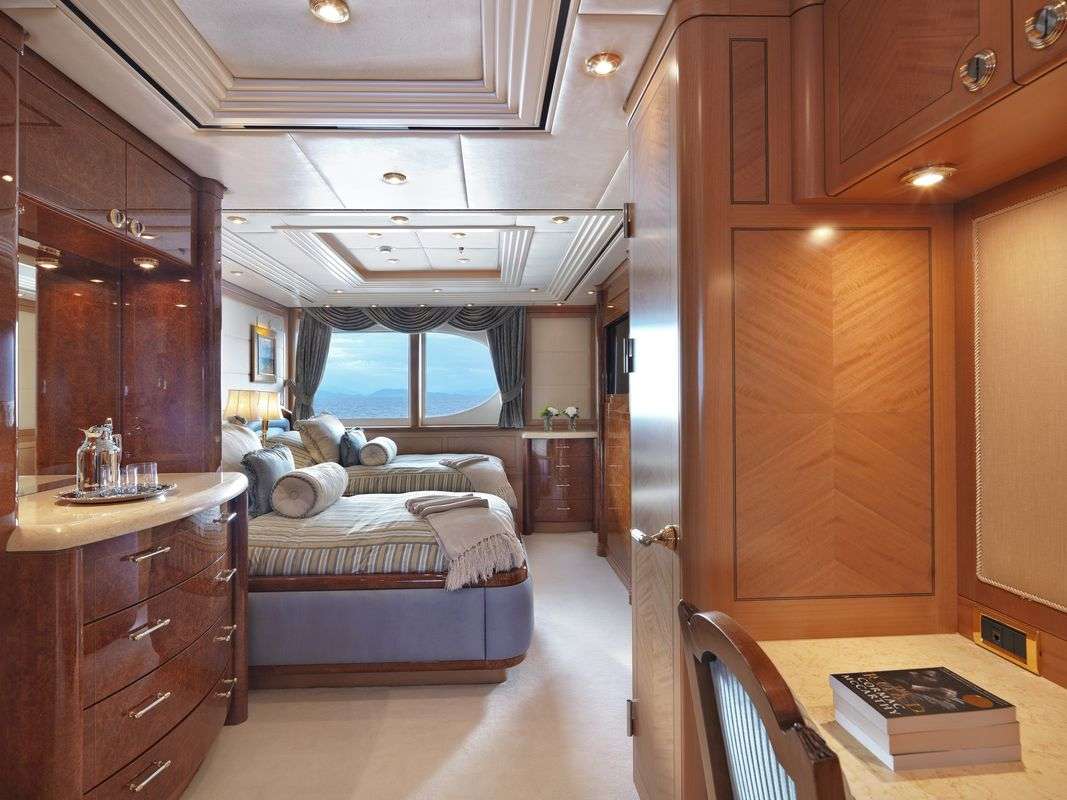 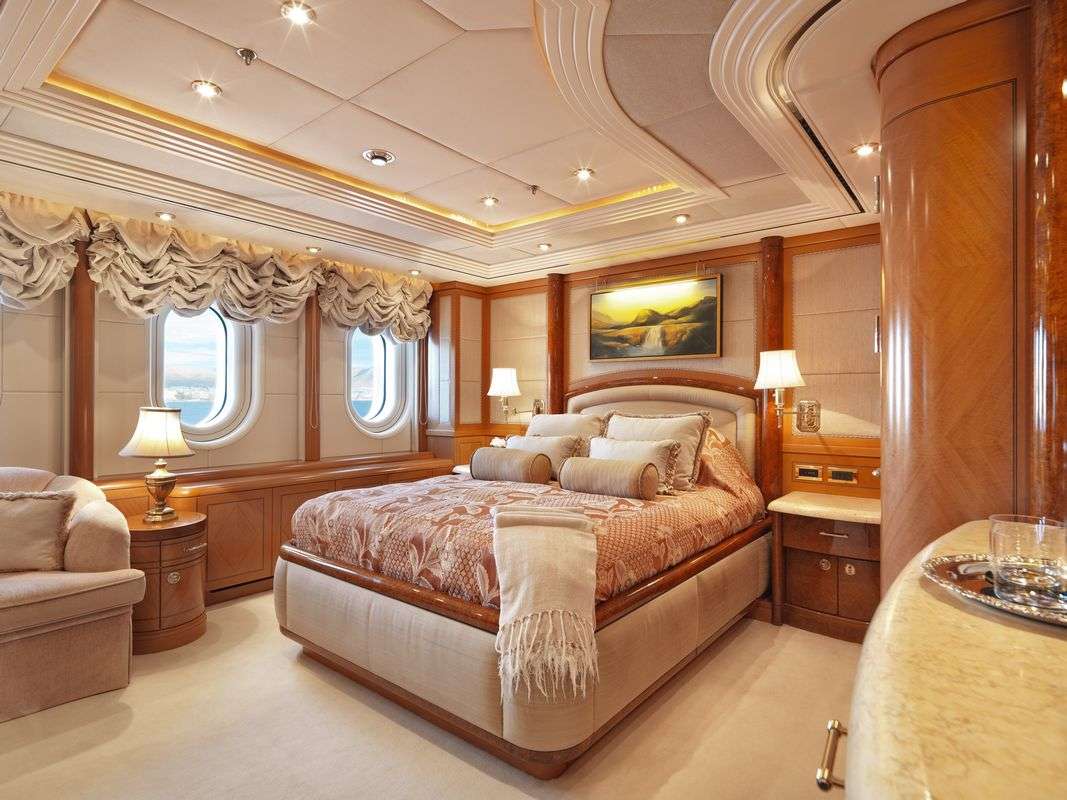 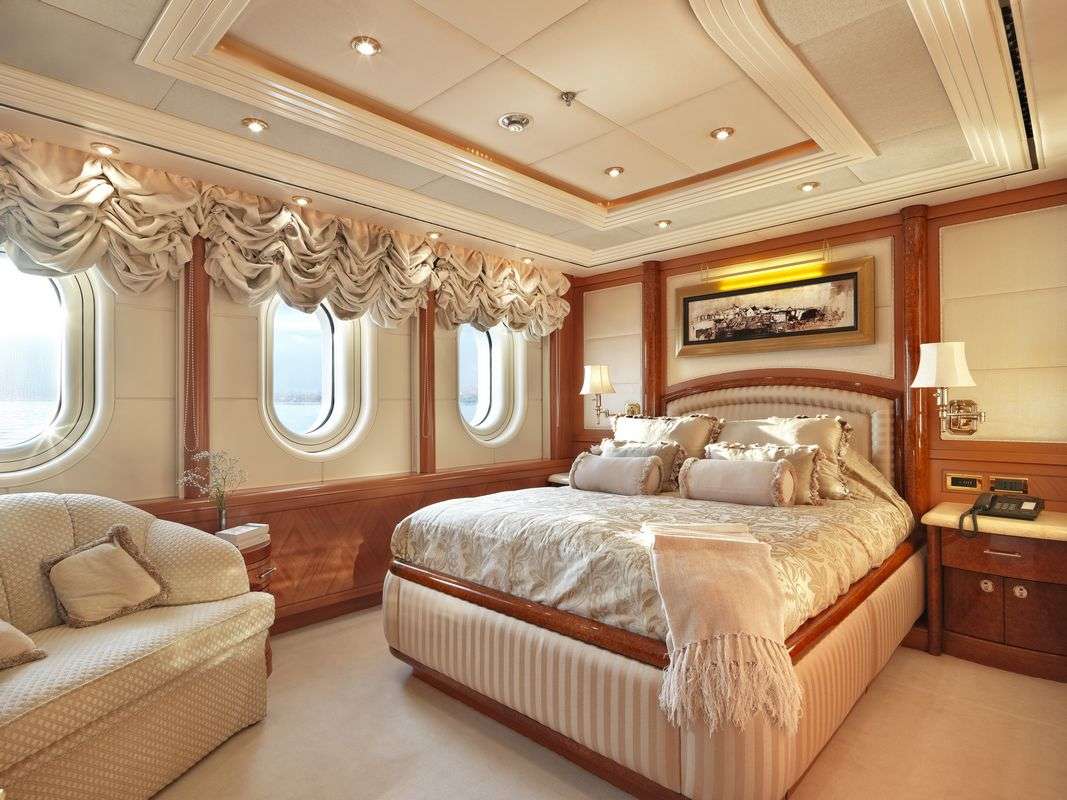 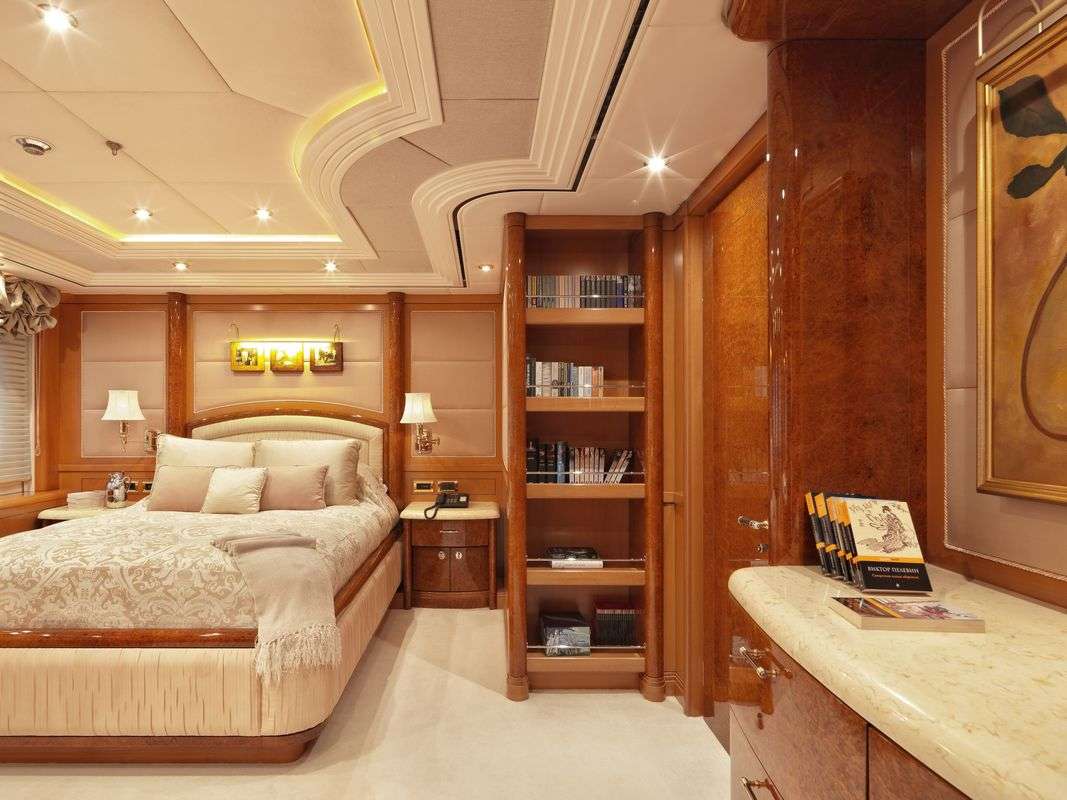 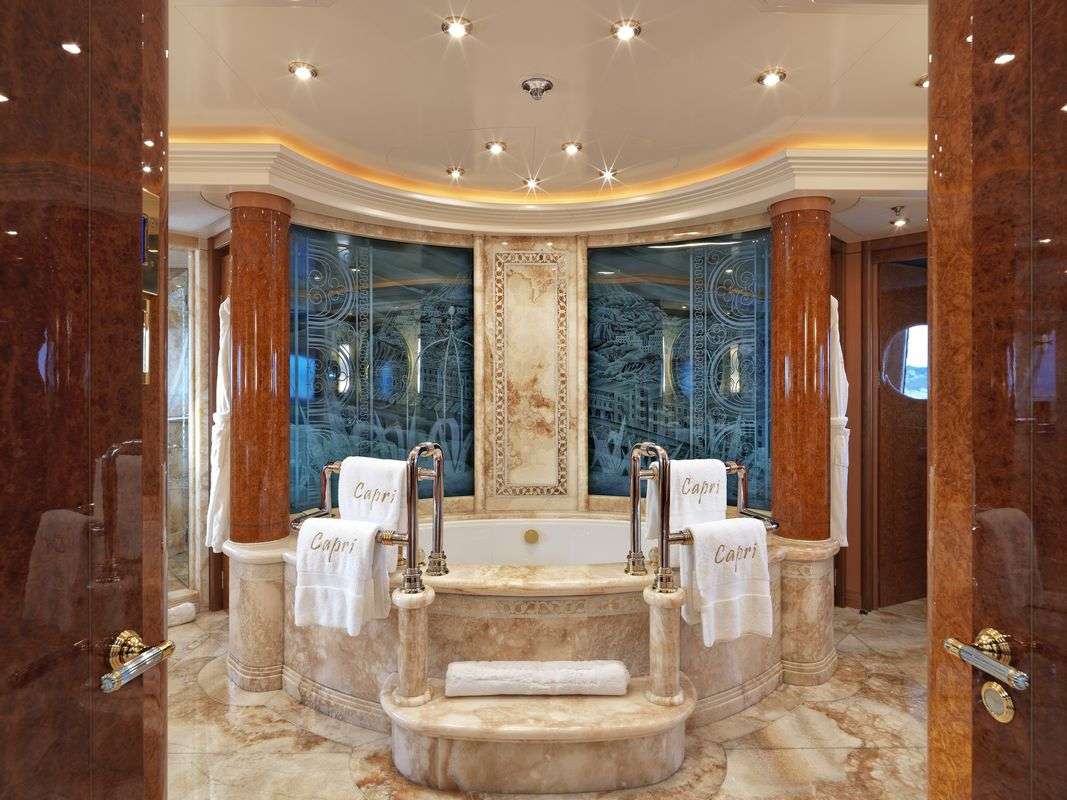 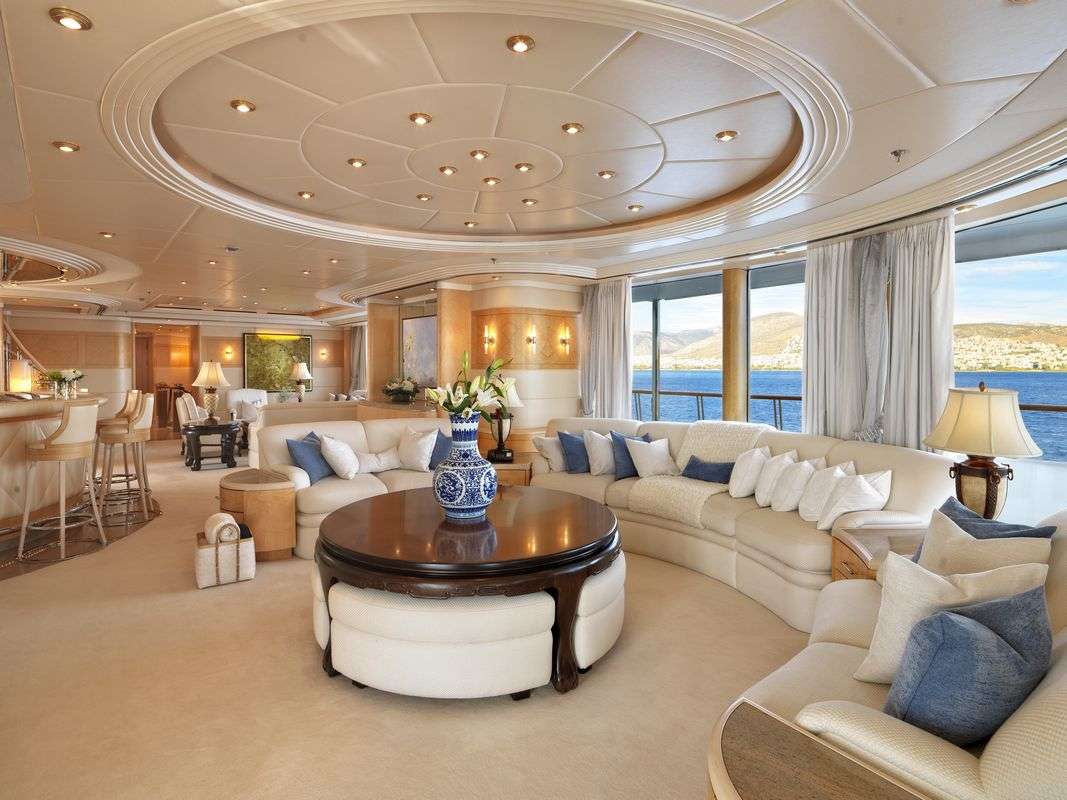 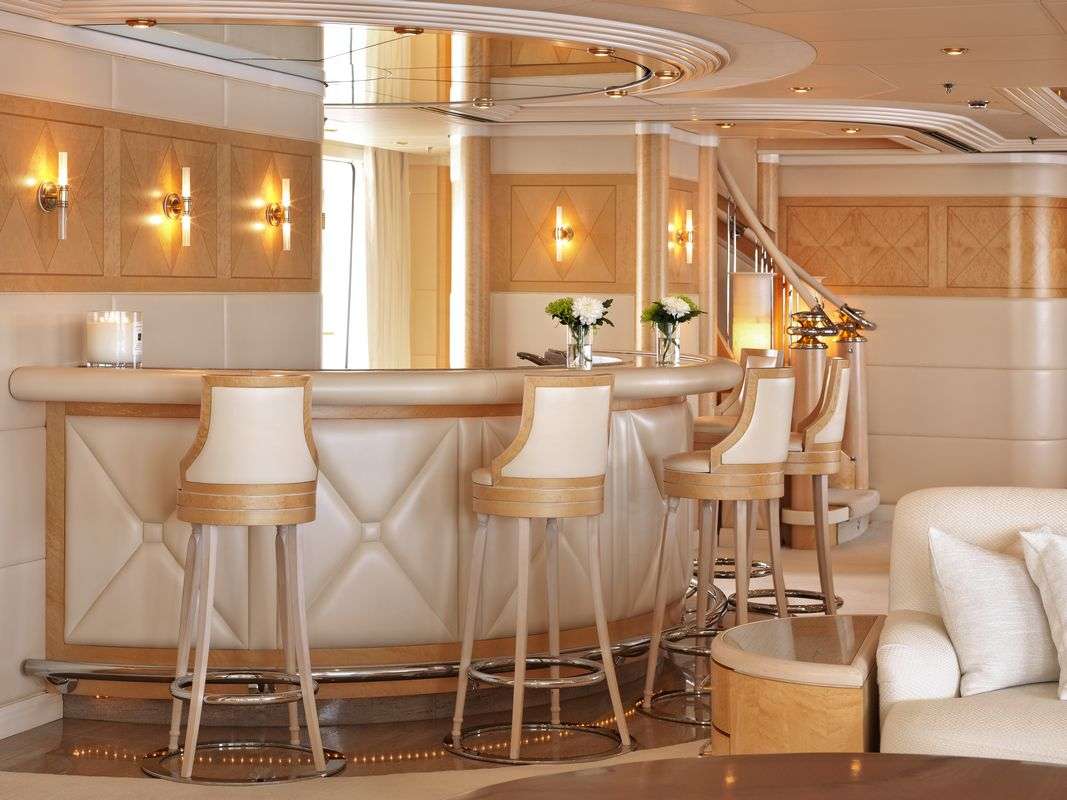 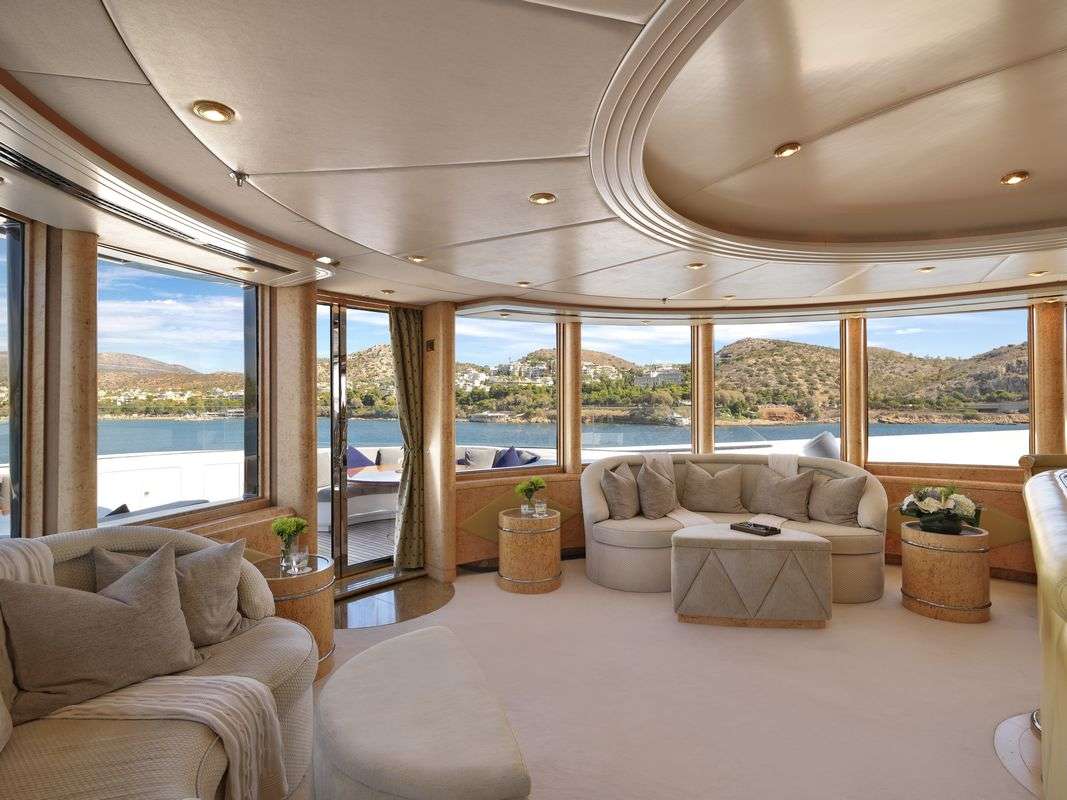 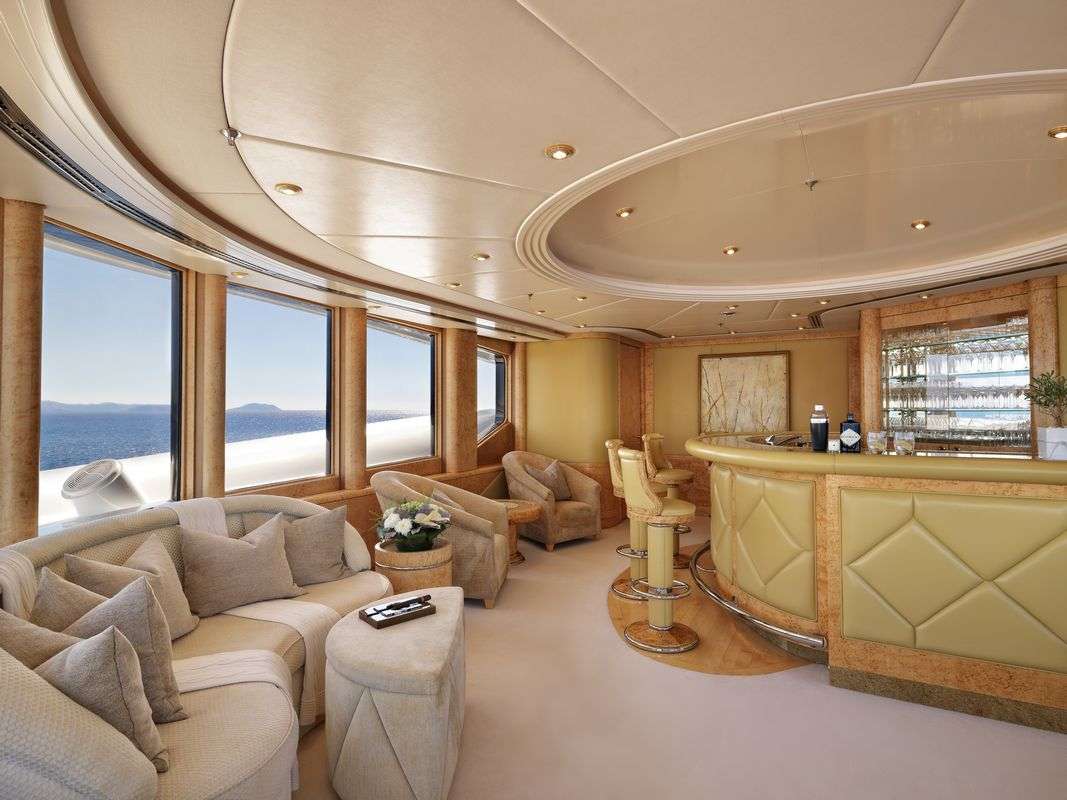 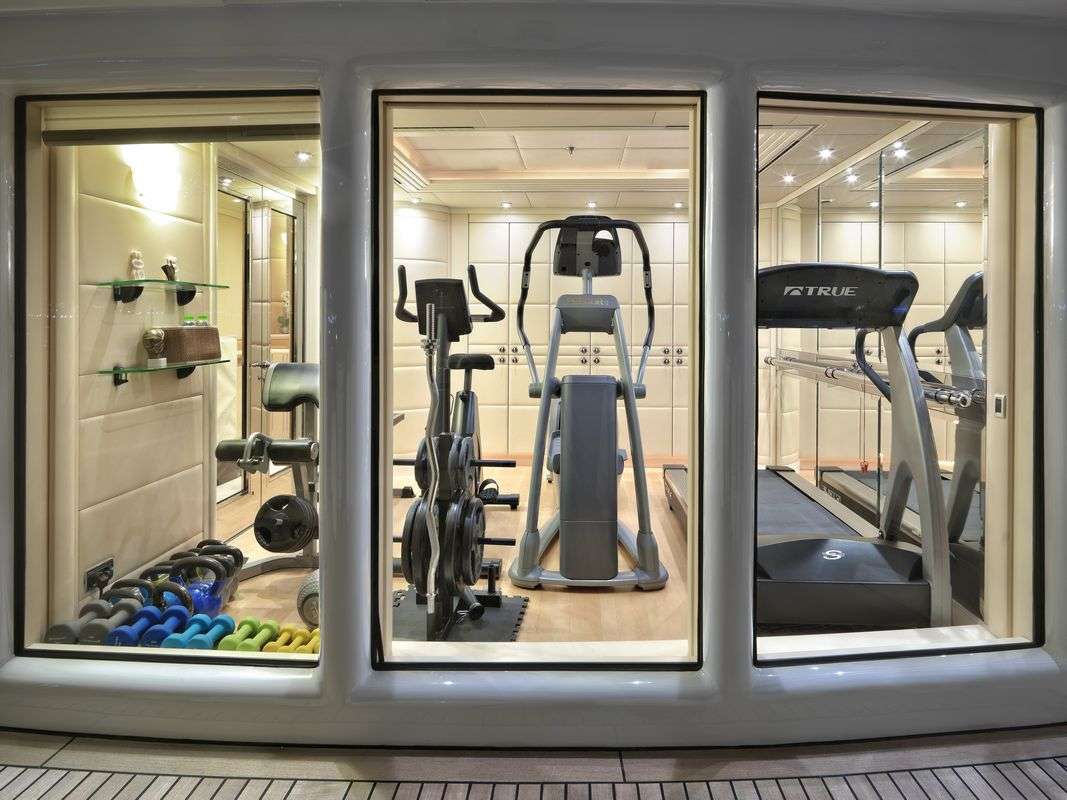 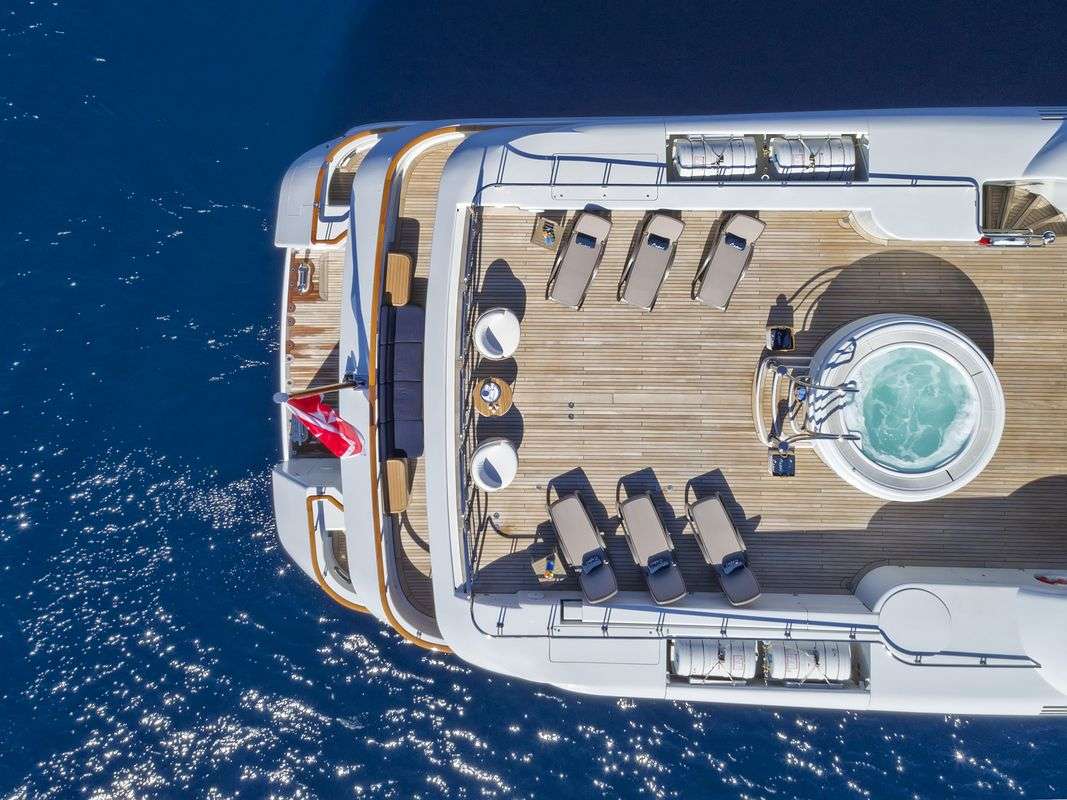 Captain: Takis Tsakos (Greek)
Captain Takis has over 30 years of experience on Cruise Liners and in the Yachting Industry. He has spent most of his marine time as Officer and Captain on Cruise Ships for 15 years for companies such as: Dolphin, Premier, Celebrity and Royal Cruise Lines, based in the U.S.A. and Med. He holds the Master’s License -Class A.
In yachting he first joined M/Y Alfa 52 meters during the construction time in Benetti Yard, assisting the Project Manager and continued for 3 years as captain and manager of the yacht till she has been sold. Then he continue working for the same owner and he was in charge as owner’s representative & as captain he was over viewing 3 new build projects in Oceanco yard in Holland: M/Y Alfa Four 60 meters, M/Y Dilbar 66 meters and the 80 meters project yard no: 781. Also he was Captain in M/Y Alfa Four for 2 years. In 2005 he took over the leadership as manager and captain of the very well-known Charter Yacht Ionian Princess 45m, completing in 10 years many successful charters. During 2015-2019 he served onboard professional luxury charter yachts as MY Alexandra ( 50m Benetti) & MY Bliss (45 m Hessen). In September 2012, Captain Takis Tsakos awarded as Best Charter Captain of the Year at Monaco Yacht Show.
He is a great commander of the yacht ensuring the safety of all passengers and expert in organising his crew. He has cruised to the best yachting destinations around the globe and he is highly experienced in the East and West Med. With an extensive knowledge of all ports and marinas, the best isolated beaches, beautiful landscapes and sights, restaurants, historical sites etc. he loves creating tailor made cruises according to guests’ requests. Captain Takis is also a master of languages, speaking fluent English & Greek, and conversational Spanish & Italian. He enjoys the good food, dancing, and all types of water sports and winter sports, and well-being an Ex Rally car Racing driver.

Chief Officer: Panayiotis Petrakis (Greek)
Panayiotis is 41 years old born in Piraeus and has graduated from the Merchant Marine Academy of Epirus in 1999. He holds an STCW A’ class Captain’s diploma and all the necessary certificates and professional qualifications. He also holds High Speed Craft Operator Diploma and a PADI Advance open water certificate.
In his past experience he has worked in various merchant ships. In 2005 he joined the yacht industry as a chief officer in many yachts such as Aegean Schatz 28m charter yacht, Marbrouk 40m charter yacht, Geosand 44m private yacht, Daloli 40m charter yacht, O`neiro 55m charter yacht, O`pari 73 m charter yacht.
Panayiotis speaks English, Spanish and Greek and in his free he enjoys music, literature reading and scuba diving.

Chief Engineer: George Tsakos (Greek)
George is 40 years old and he is a graduate of the Merchant Marine Academy of Chania. He holds an STCW A’ class engineer’s diploma. In his past experience he has worked in many merchant ships and eventually he joined the yachting industry as an engineer on-board various yachts. George is skilled and with his 20 years’ experience ensures that everything works perfectly on M/Y Capri i. George speaks Greek and English and he enjoys sports and reading.

2nd Engineer: Yannis Karydis (Greek)
Yannis is 33 years old born in Athens and has graduated from technical institute of Athens in 2010. He holds an STCW c’ class engineer’s diploma. He joined the yacht industry in 2011as an engineer in many yachts until now such as Elegant 007 73m charter yacht, Lost 25m private yacht, I Sea 40m charter yacht. He speaks English, Spanish and Greek. Yannis is married with one child and in his free time he enjoys music and reading

Chef: Thanasis Stathoulias (Greek)
Thanasis is 39 years old born in Athens and has graduated from the culinary institute of the National University of Tourism in 2000. Thanasis has also attended numerous practice seminars such as: “Molecular cuisine”, “Dessert a l’ assiete I&II” with chef Stevy Antoine, “Sous Vide techniques” , Pastry Seminar with the renown Greek pastry chef Stelios Parliaros, “Modern cuisine” with Reginald Ioos and many more. He has worked next to famous Greek chefs and he participated in many exhibitions in Greece and abroad.
He started his career at Xenia Resort in Lagonissi and then for 8 years he was a part of the St. George Lycabettus Hotel cooking team. He was in charge of the Grand Balcon restaurant of the hotel next to the chef Ettore Botrini where in 2007 & 2008 the restaurant was distinguished with the Toques D’Or, the only Greek restaurant gastronomy contest. Since then he has worked in big hotels and 50m private yachts. Thanasis is dedicated and passionate with cooking. He has worked next to famous chefs and he has participated in many exhibitions in Greece and abroad. He is married and speaks English fluently, French and Greek. He loves reading and cinema.

Sous Chef: Stella Christou (Greek)
Stella is 30 years old and she holds a diploma in Culinary Arts from IEK Delta in Thessaloniki. After gaining her diploma, she has continued growing her knowledge of the Mediterranean cuisine by attending numerous seminars and working in Luxury hotels and restaurants around Greece. Before joining Capri I she was the cold kitchen chef at Makedonia Palace Hotel in Thesaloniki. Stella has participated in festivals and received the 1st place in the “Panhellenic Global Chef Challenge” organized by the world association of Chef’s Societies (WACS) and the 5th place in the “Regional European Global Chef Challenge” by WACS. Stella speaks English, and her hobbies are travelling, music tennis and table tennis.

Chief Stewardess – Yuliya Savenko (Ukrainian)
Yuliya was born in 1981 in Ukraine. She joined the yachting industry in 2006 and since then she has gained a vast amount of experience on board various charter mega yachts as chief stewardess , including M/Y Sunrise (52m), M/Y Alexandra (50m), P/V Moonlight II (92m) and M/Y Ionian Princess (46m) . She is extremely professional with excellent organisational skills, very active with a lovely and friendly personality. She is hardworking, responsible and always gives her outmost to offer a flawless service. She has attended numerous seminars and received special training in luxury hospitality, bartending and mixology and advanced level of oenology l. Yuliya speaks English, Russian and Greek. She loves spending time with her children and her hobbies are reading, music and running.

Stewardess: Raigie Kondi Pano (Philipino)
Raigie is 36 years old and is a graduate of the Philippine Christian University with a Bachelor of Sience in Office Administration and a Major in Computer Education. Raigie is highly motivated and enthusiastic person, very flexible and a great team player. She joined the yachting industry in 2007 and worked in many yachts such as M/Y Lullaby 36m, M/Y Dragon 37m and M/Y Lumar 34m. She holds all necessary certificates for her position such as firefighting, lifesaving, first aid etc. Raigie speaks English and Greek and loves computers.

Stewardess: Eva Konstantoni (Greek)
Eva is 40 years old, a Greek national. She holds a degree in International and European Studies but her love for the sea and her free spirit made her enter the yachting industry in 2016 onboard M/Y Miarama 56m. Since then she has served on-board charter and private yachts such as M/Y Georgita II 35m, M/Y Tropicana 35m, M/Y Happy Dolphin 2 50m and M/Y Riva I 38m. Eva is a dedicated and motivated individual. She is a great team player with excellent interpersonal skills and with an eye for detail, taking good care of the guests with a big smile. She speaks English and also holds a speedboat license. She enjoys all watersports and dancing.

Steward: Jr de la Cuesta (Greek-Fillippino)
Jr is 35 years old born in Philippines and has graduated from the DSNT academy in Manila. Jr is very happy person always smiley but the same time very serious professional and very experienced in his work. He has worked in many yachts such as Let it be 40m charter yacht, Vera 52m charter yacht, Melige 34m private yacht, and Nicola ii 25m charter yacht. Jr is single and he is an amateur dj. He speaks English, Greek and Pilipino.

Stewardess: Alexandra Yakovleva (Russian)
Alexandra is 37 years old born in Kazan – Russia and has graduated from an art school. Alexandra is always in smiley with unlimited strength for her work. She joined the yacht industry in 2005 and worked in many yachts such as Carmen Fontana 40m charter yacht, Ekali 37m charter yacht and Proton 40m charter yacht. She is single and loves classical music, dance and travelling. Alexandra speaks English, Greek and Russian

Bosun : Stefanos Tsormpatzoglou (Greek)
Stefanos is 27 years old and he is a graduate of engineering department of the Greek Nautical School. He holds numerous certificates including Speed Boat License, Proficiency in survival crafts, RYA powerboat level 2 etc. He is very professional and very experienced in his work and a real gentleman. Stefanos joined the yacht industry in 2008. He has worked on charter and private yachts before joining Capri I such as M/Y Pollux, M/Y Selfie, M/Y Mia Rama and M/Y Al Mirqab . His hobby is fishing and he speaks English and Greek.

AB: Tasos Zafiropoulos (Greek)
Tasos is 37 years old born in Athens. He holds a seaman’s certificate from the Hellenic ministry of mercantile marine, lifesaving & Firefighting certificate and a speedboat license. He entered the yachting industry in 2011 and his previous yachts among others are S/Y Gitana 36m M/Y Dora G 35m. He`s very active and friendly and safety is at the top of his priorities. He is married and he loves travelling, music, swimming and motorsport activities. Tasos speaks English and Greek.

AB: Nikos Lymperopoulos (Greek)
Nikos is 24 years old born in Megalopolis. He has graduated from a naval private institute as engineer of oil and gas technology and has received maritime training. He is a hard working person, proactive, polite and has a great sense of humour. Nikos is ready to assist his team anytime and provide quality customer service.
His previous yachts are M/Y Sole di Mare 36m charter yacht and M/Y L’ Equinox 37m charter yacht. He is single and he loves music and sports. Nikos speaks fluent English and Greek.

AB: Manolis Maounis (Greek)
Manolis is 34 years old and holds an able seaman’s diploma, a speed boat licence and all the necessary certificates for his position.
He has served on board various passenger motor vessels and motor yachts such as M/Y Pandion. In 2018 joined the team of M/Y Capri i. He is a hardworking person with strong communication skills and a great team player. Manolis speaks Greek and English and he enjoys music.