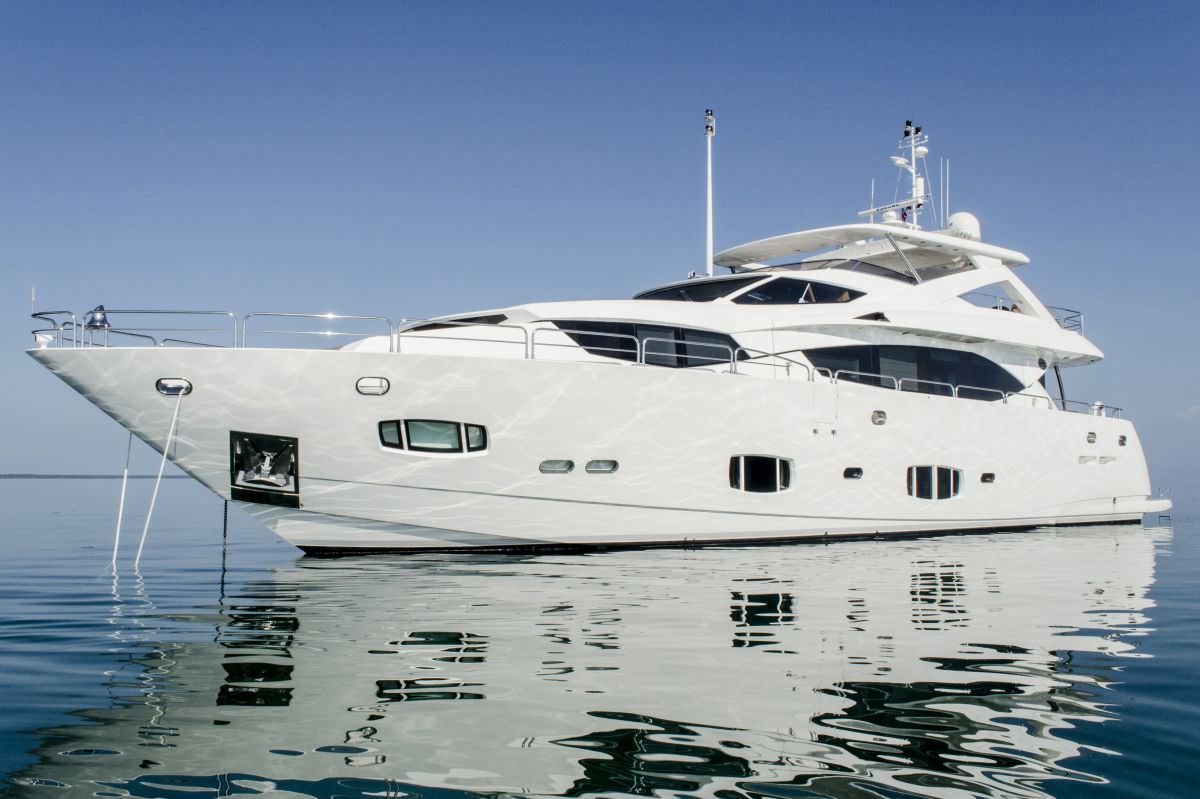 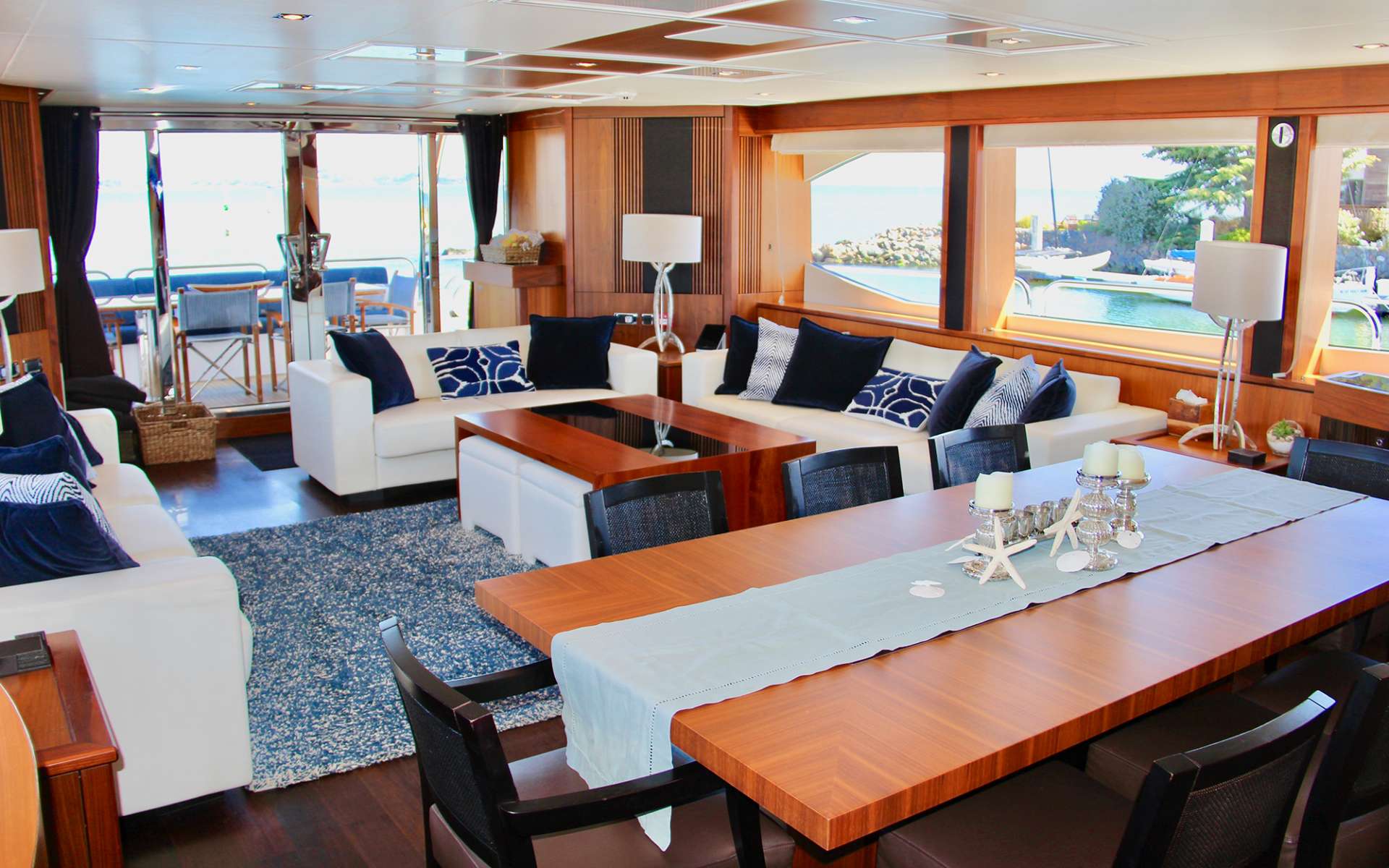 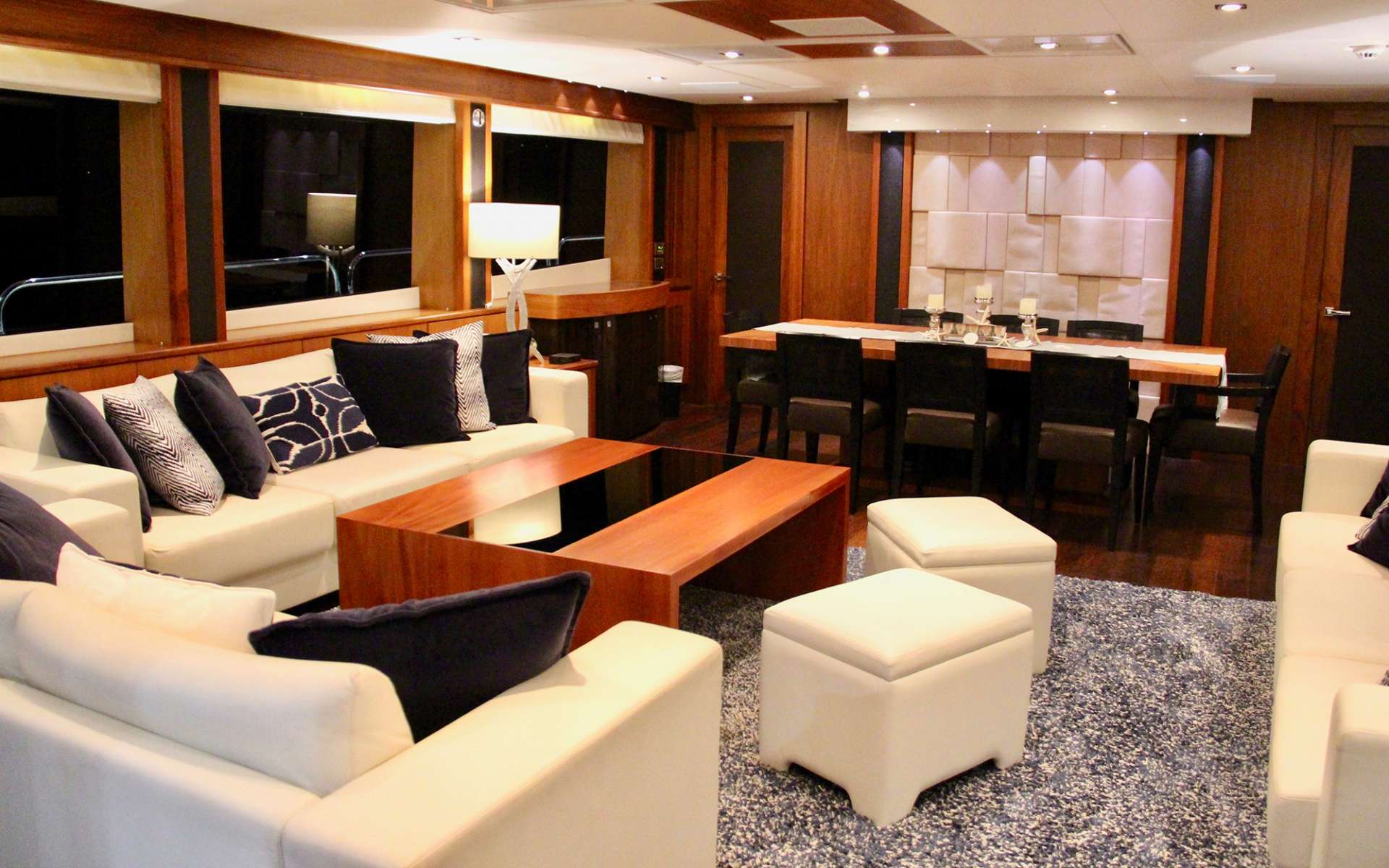 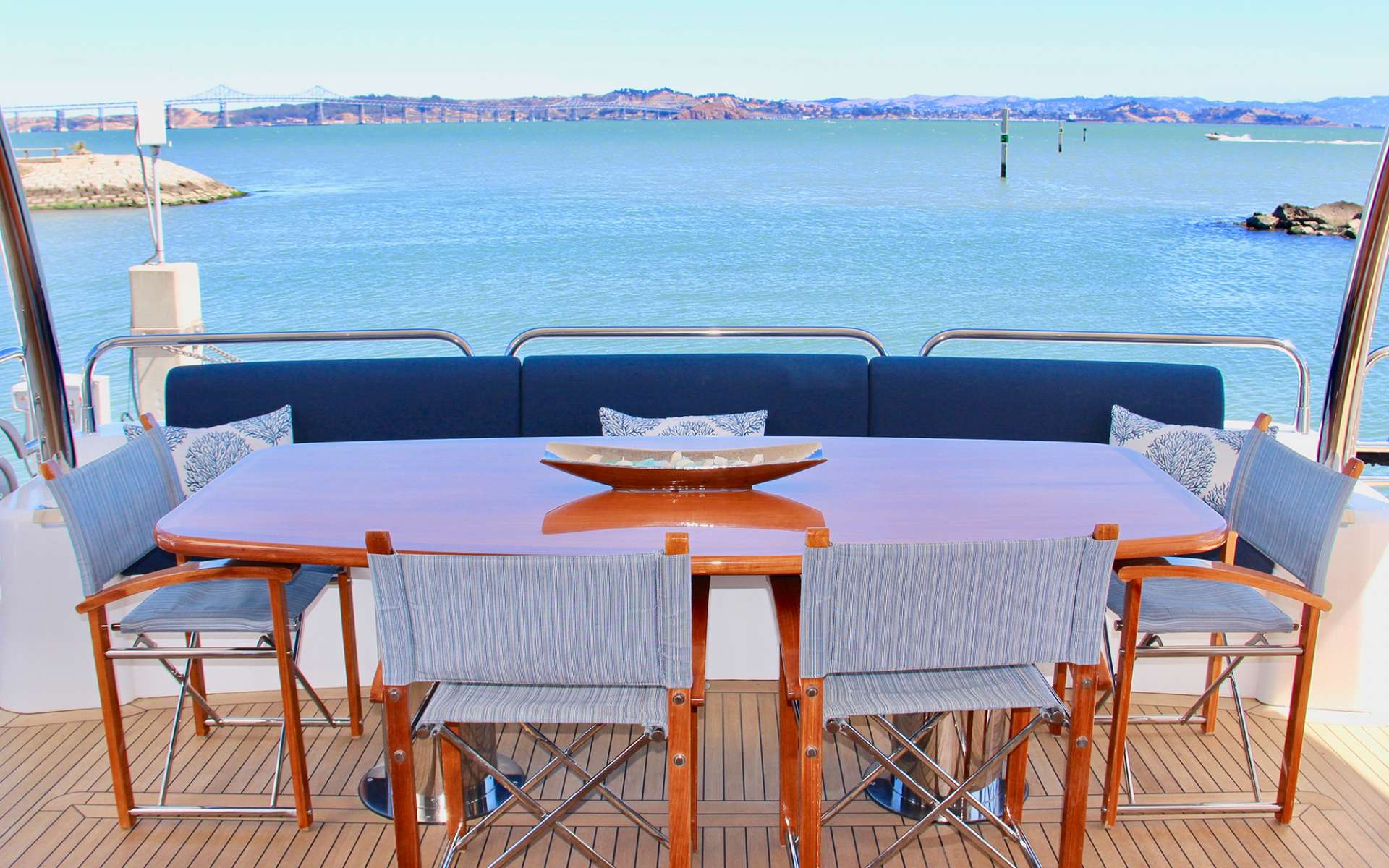 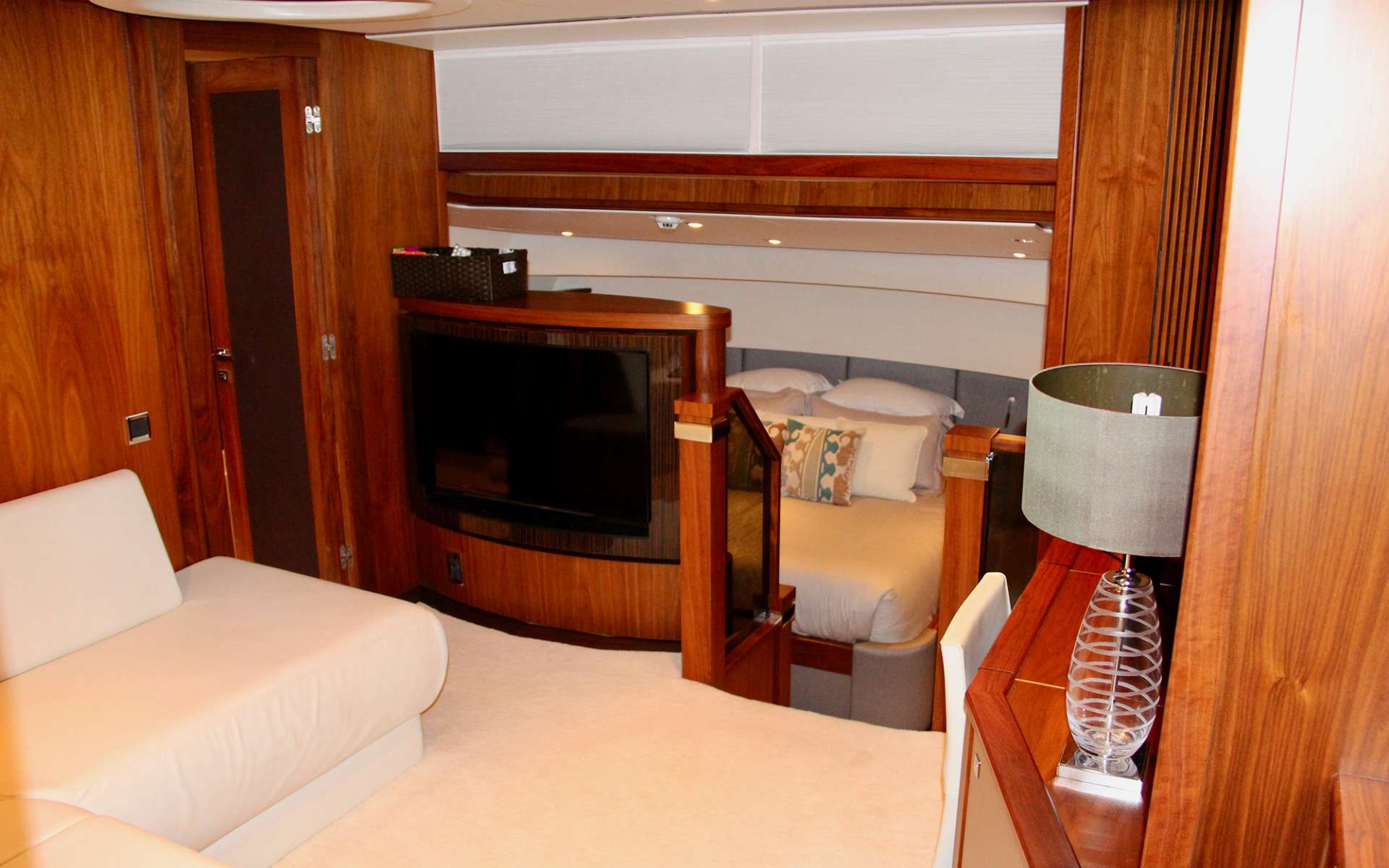 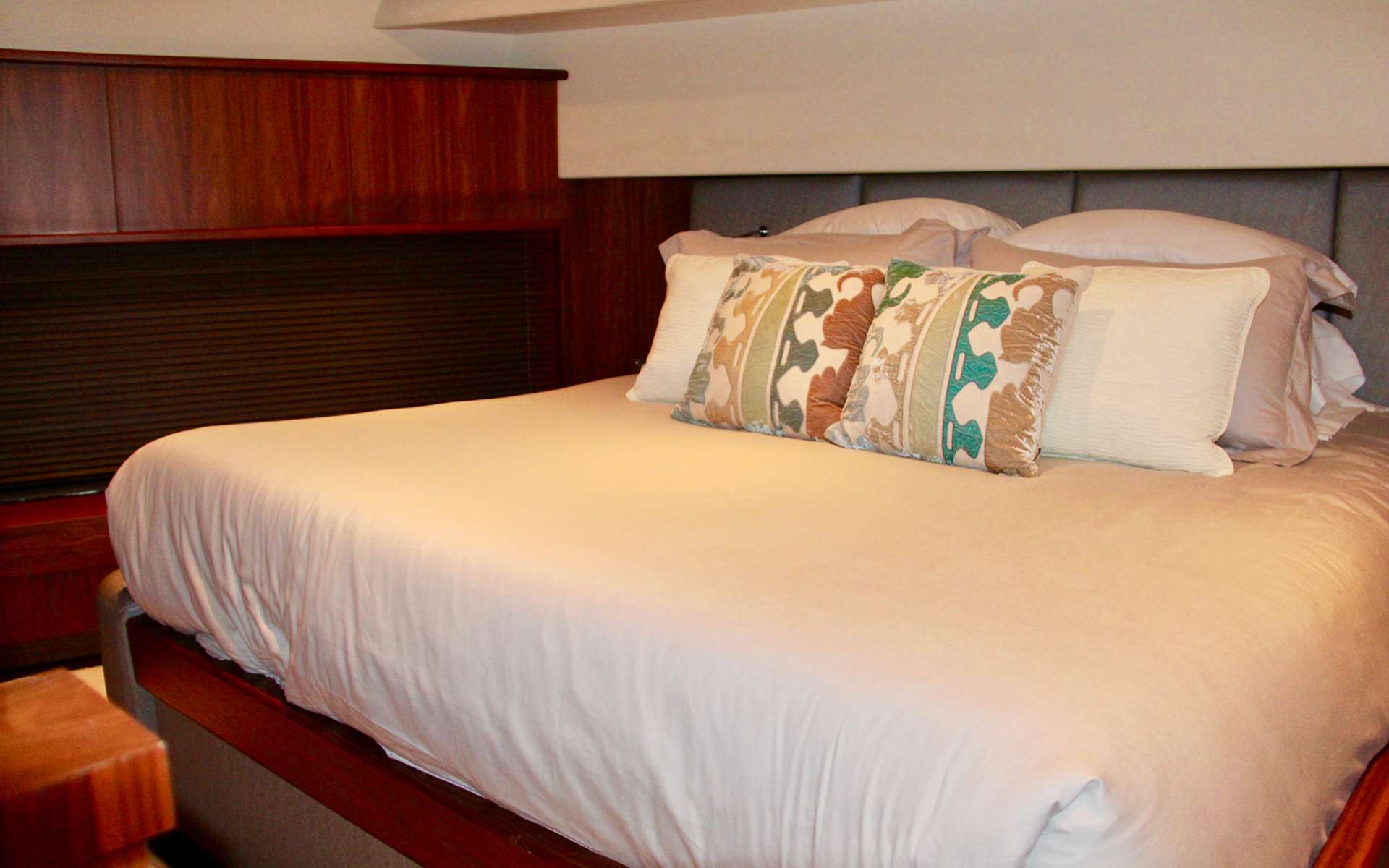 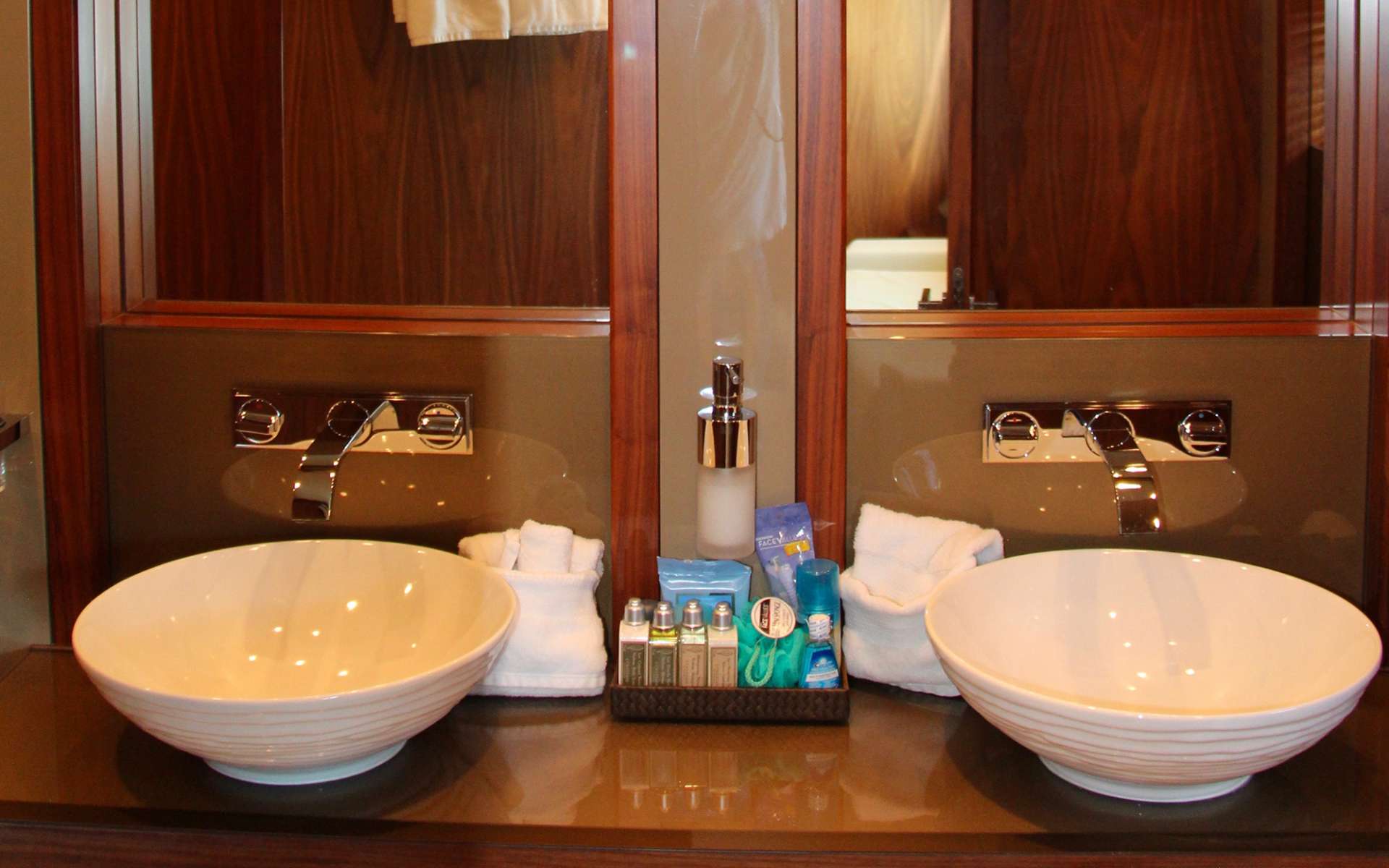 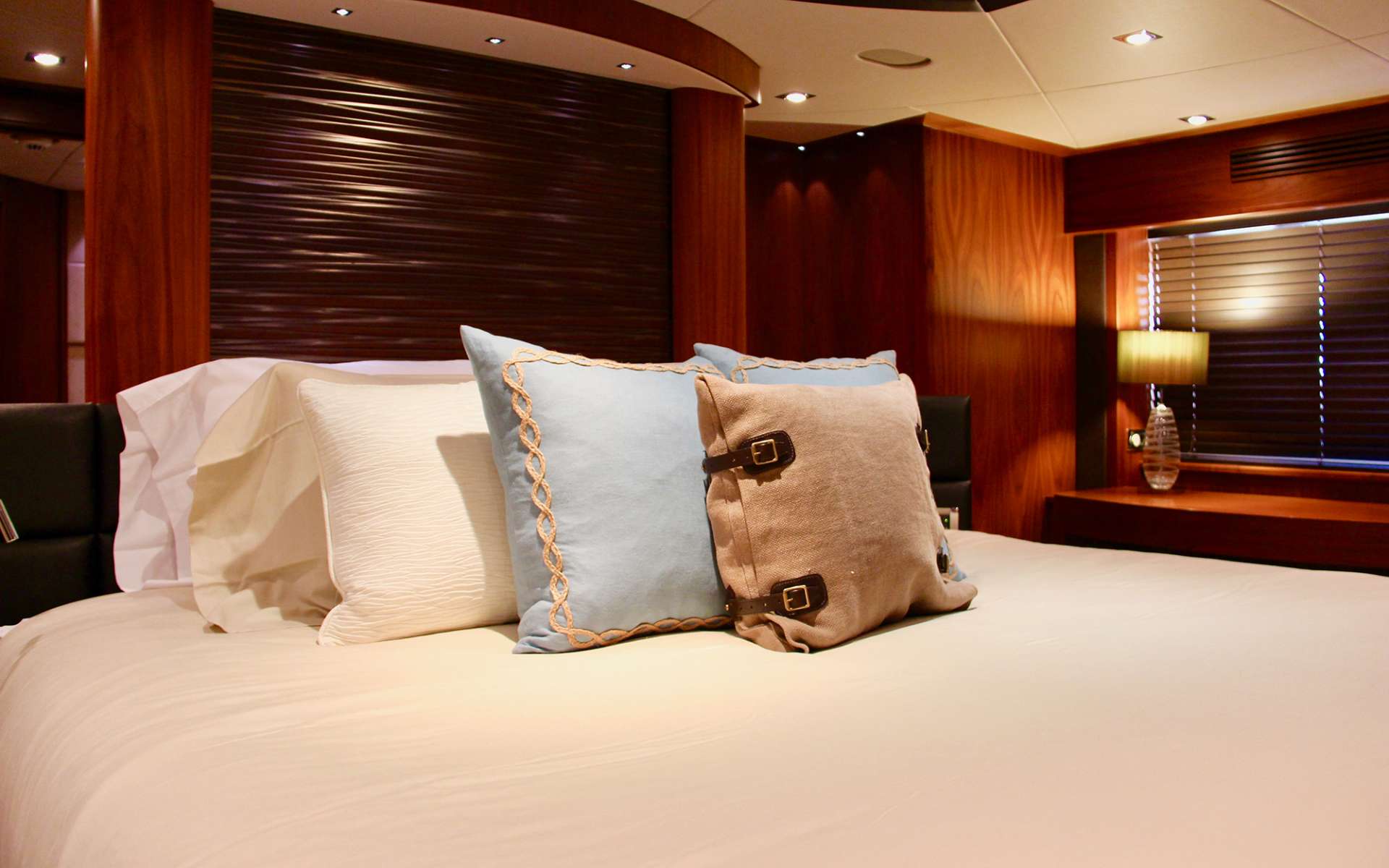 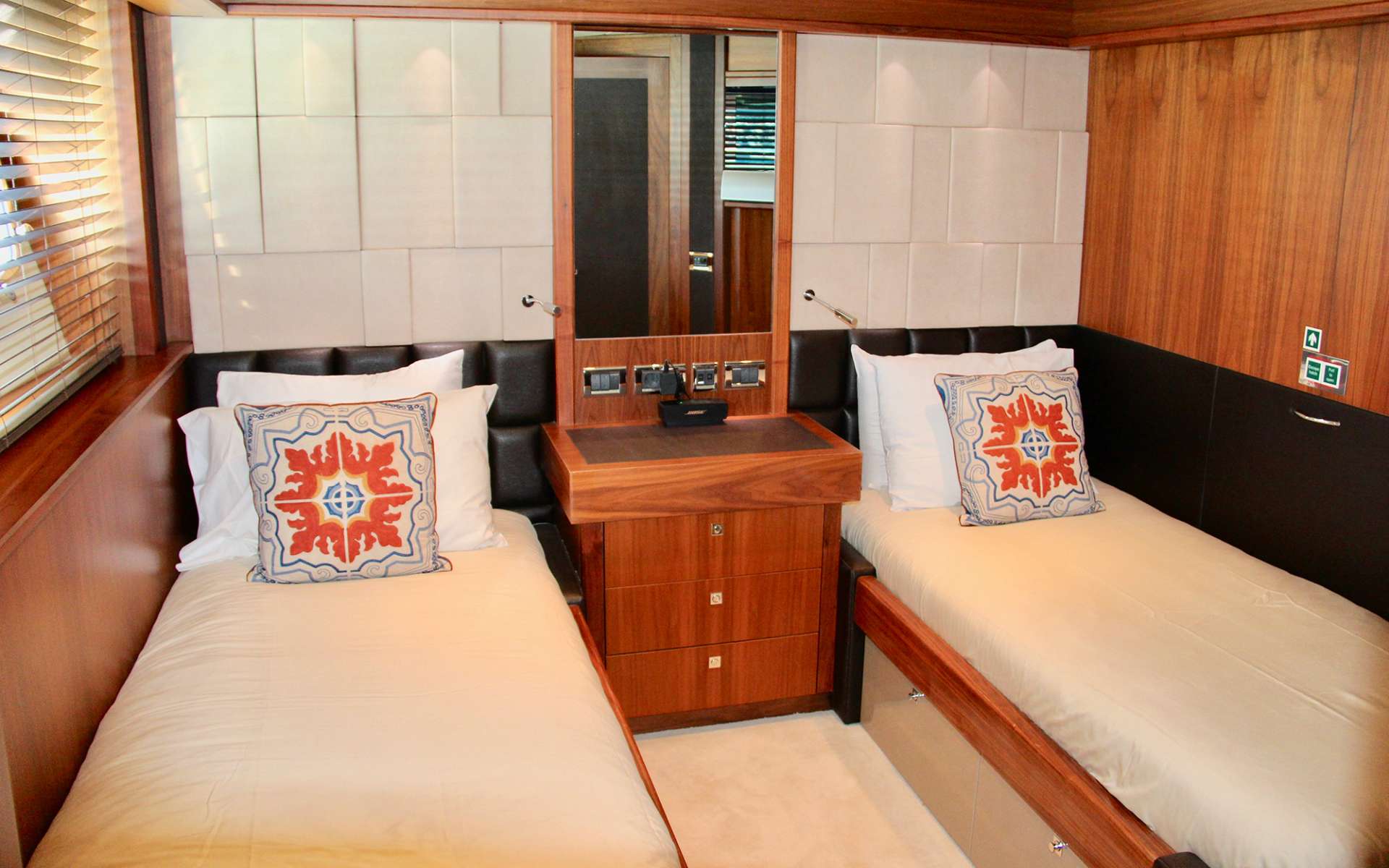 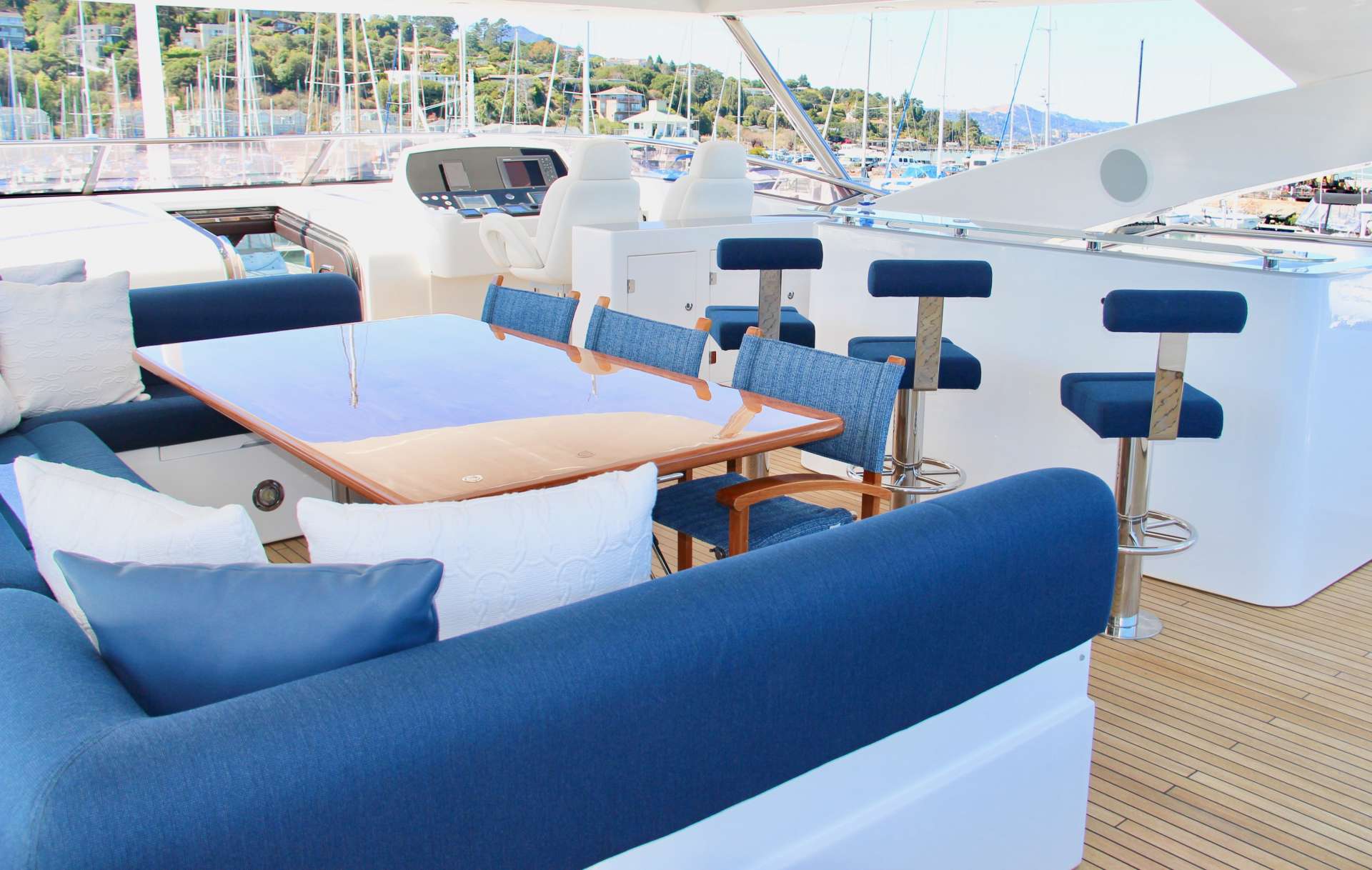 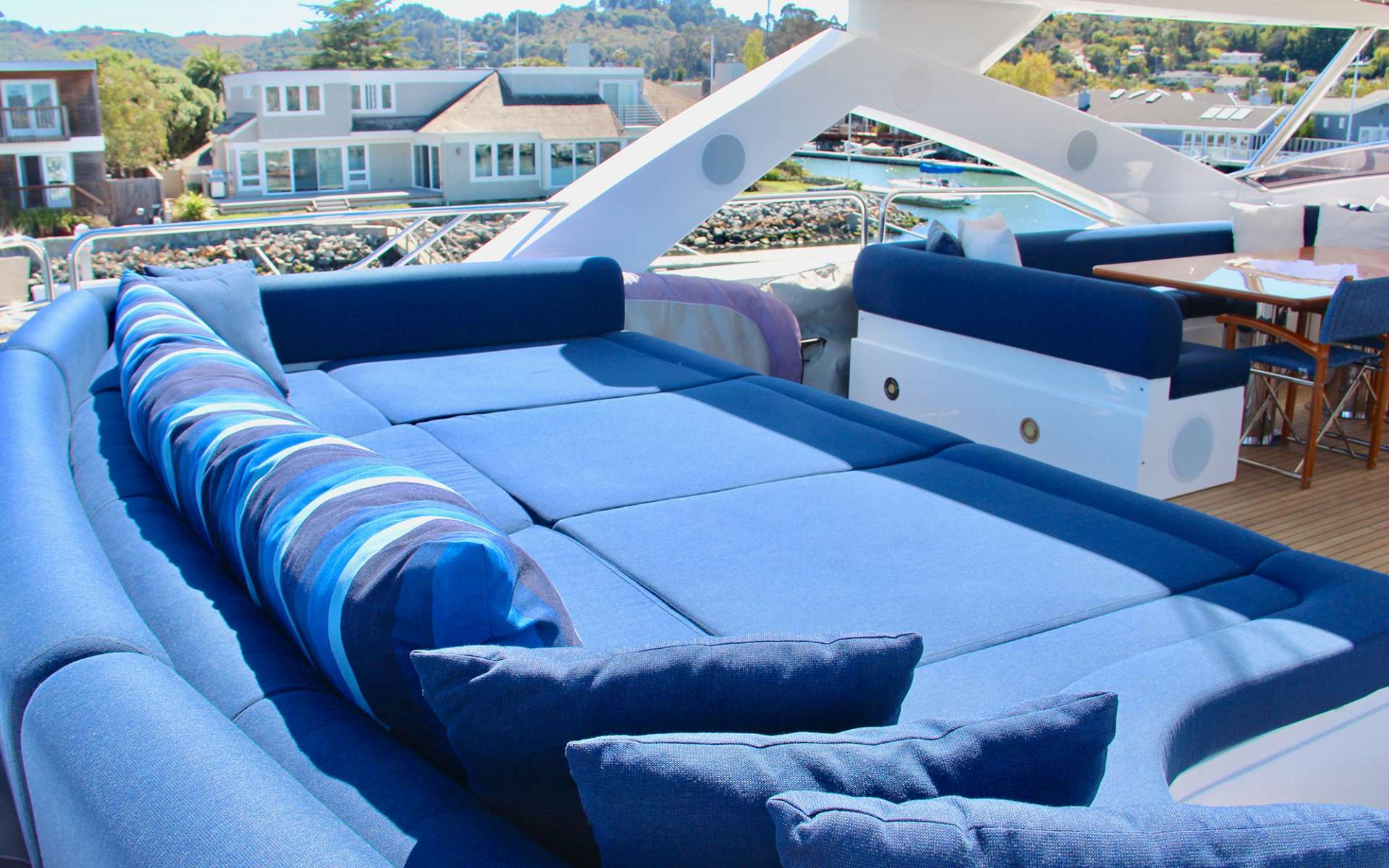 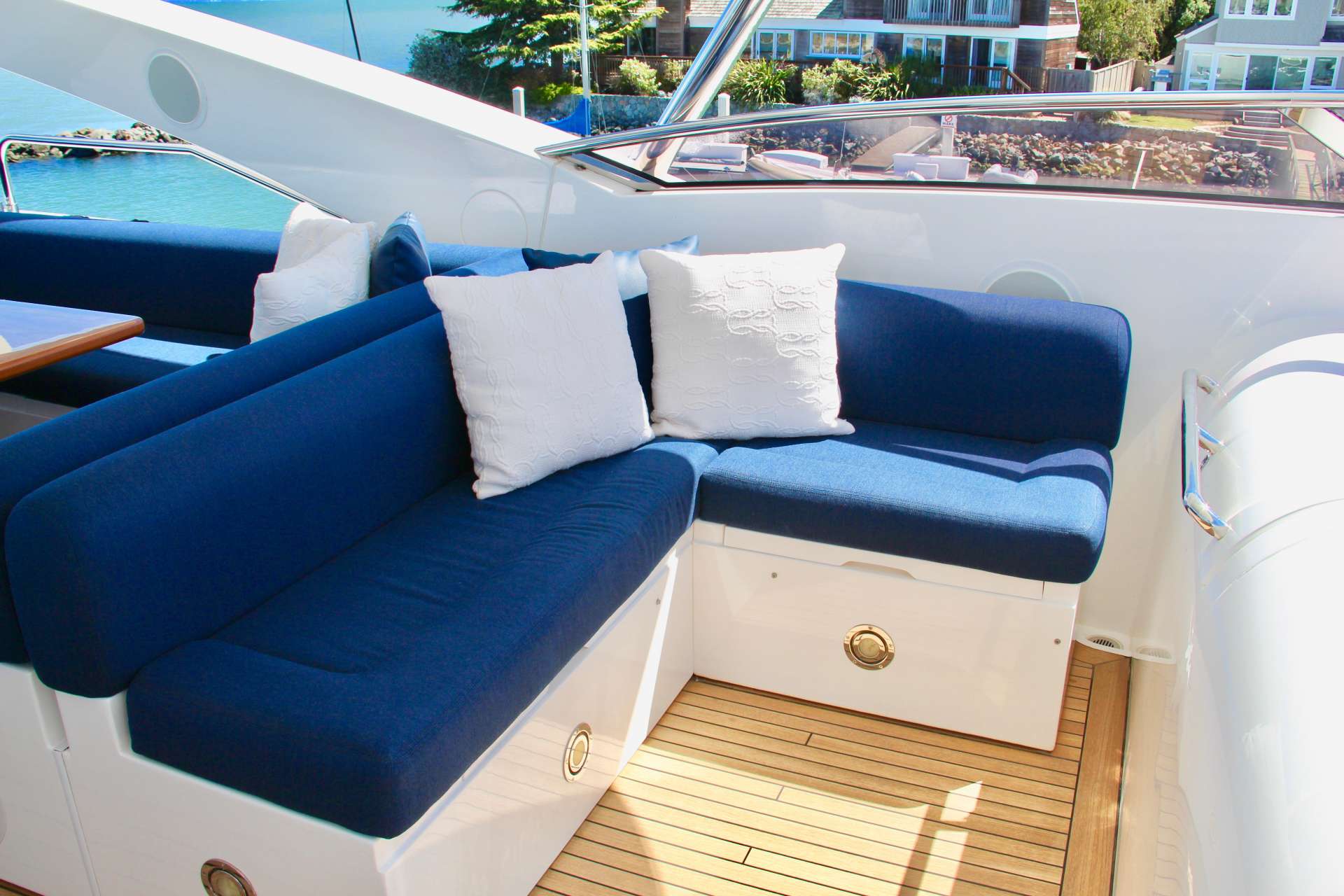 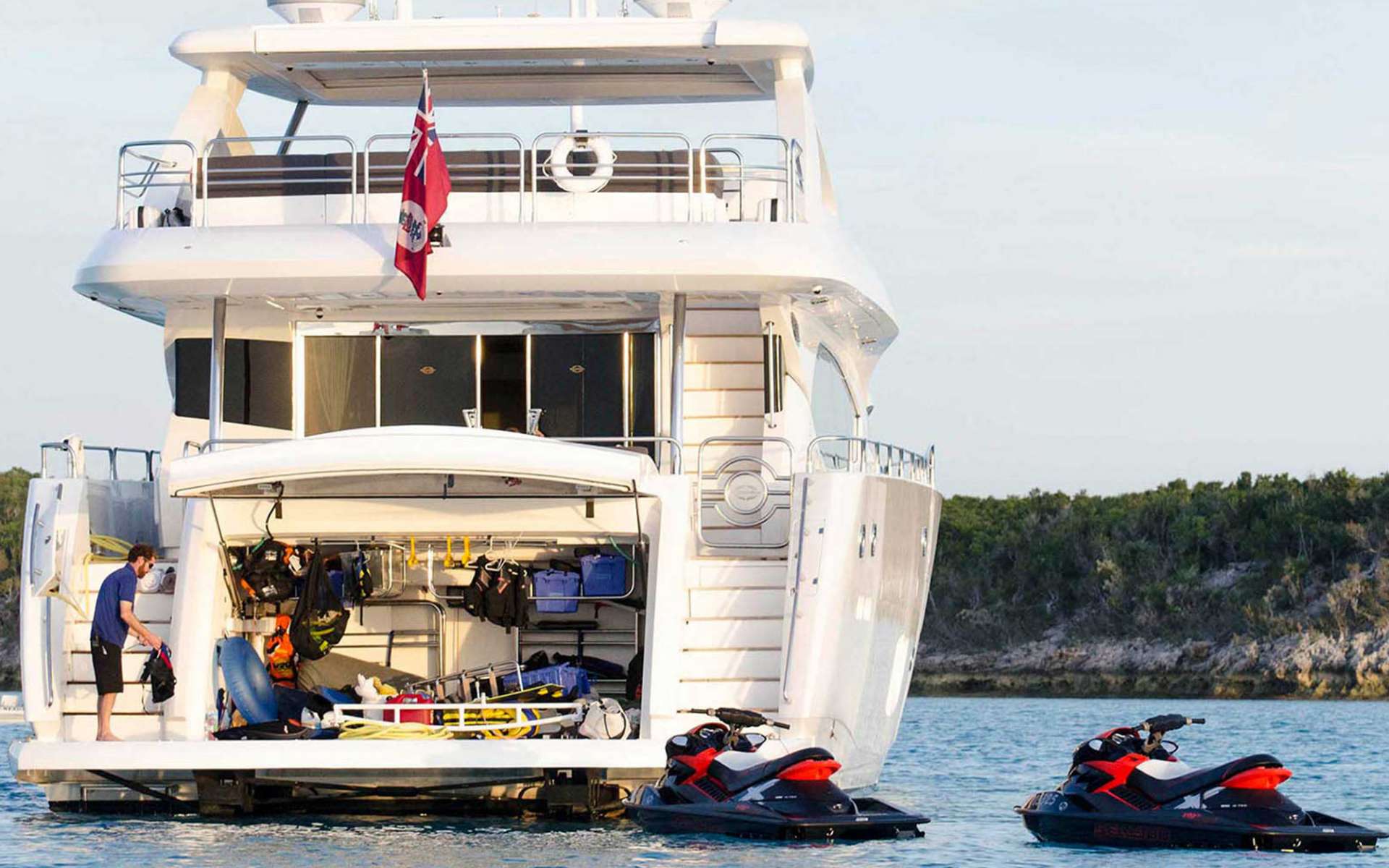 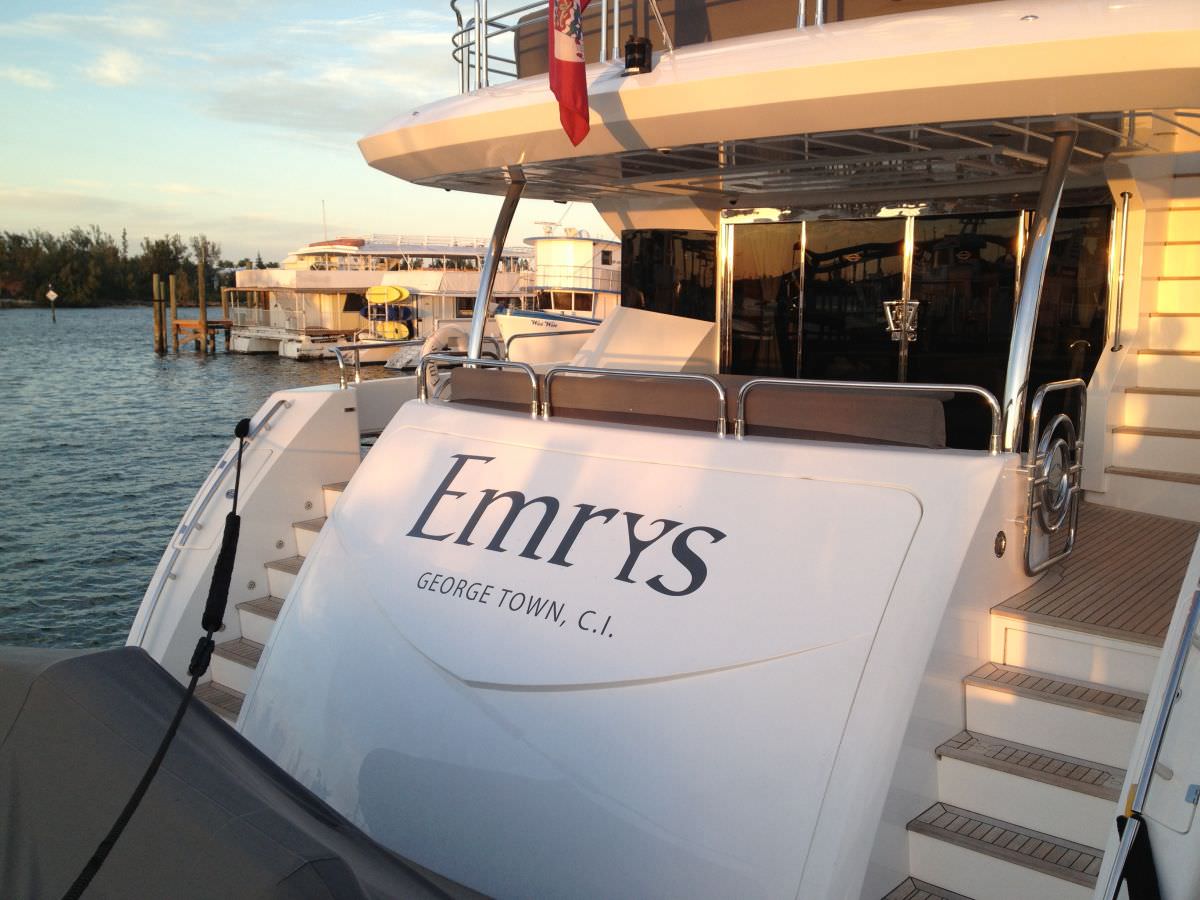 Offering superior accommodations for 8 guests with the Master Suite on the main deck. Warm walnut floors accented by cream leather sofas elevate the modern style of the interior but not overly so, while the open plan SALON with formal dining and large windows provide plenty of natural light and appealing space.

A split level set up forward features a personal lounge entry cascading down to a King size Master bedroom with full ensuite bathroom, walk in closets and full AV system inclusive of Satellite TV x 2, Apple TV and Bluray. Three additional cabins below midship feature a full beam King which can be considered as a 2nd master, along with the two Twin cabins. All ensuite bathrooms within.

The AFT deck is a perfect shaded area for one of the two al fresco dining options while those who prefer a more panoramic view may choose to dine alternatively on the SUNDECK. Here the retractable roof offers the perfect versatility for cocktails at the bar under the stars or more private sunbathing. The FOREDECK provides a 2nd sunbed on days at anchor or during a calm, slow cruise.

Captain Ben Steppens
Nationality: British
Ben has been working in the Super Yacht industry since he finished his professional wakeboarding career at 23. Ben traveled the world doing wakeboarding competitions and found that he had a real passion for the water. After a sports related injury, Ben turned to sailing. He started working as a deckhand on small sailing boats in the Mediterranean, racing across the Atlantic, and in the Caribbean. He worked his way up to Captain on sailing boats cruising the Caribbean, Mediterranean, and the Red Sea. In 2011 Ben moved onto motor yachts. He has worked for private and charter boats ranging from 24 meters to 30 meters and has definitely enjoyed the experience.

Ben is very excited to be a part of Emrys and welcomes you to join us in California and Cabo San Lucas. His many years in yachting and experience will guarantee that your trip will be unforgettable.

Chef/Stewardess: Becca Ellson – Steppens
Nationality: American
Becca was introduced to the yachting industry in 2010. After finishing her degree in Nutrition, at Penn State University, Becca moved to El Gouna, Egypt where she met Ben. Her first job was on a 27 meter motor yacht in Greece and Turkey and hasn’t looked back. Since then she has been traveling the Mediterranean and working as cook/stew and chef. Becca loves the freedom and challenges of creating menus, using local ingredients, and improving her culinary skills.

Becca is thrilled to be working on Emrys. With a passion for service and cooking, Becca takes great pride in working closely with clients to ensure their vacation aboard is an experience of a lifetime.

Mate: Kahris Beneby
Kharis was born in the Bahamas. He spent his early years there doing anything that involved the ocean. He spent his teens in south Florida and became fascinated by the yachting industry. After high school he joined the US Navy, due to medical reasons he left after a year and there yachting was to embrace him. Kharis loves music, traveling and meeting new people and can’t wait to welcome you onboard Emrys.