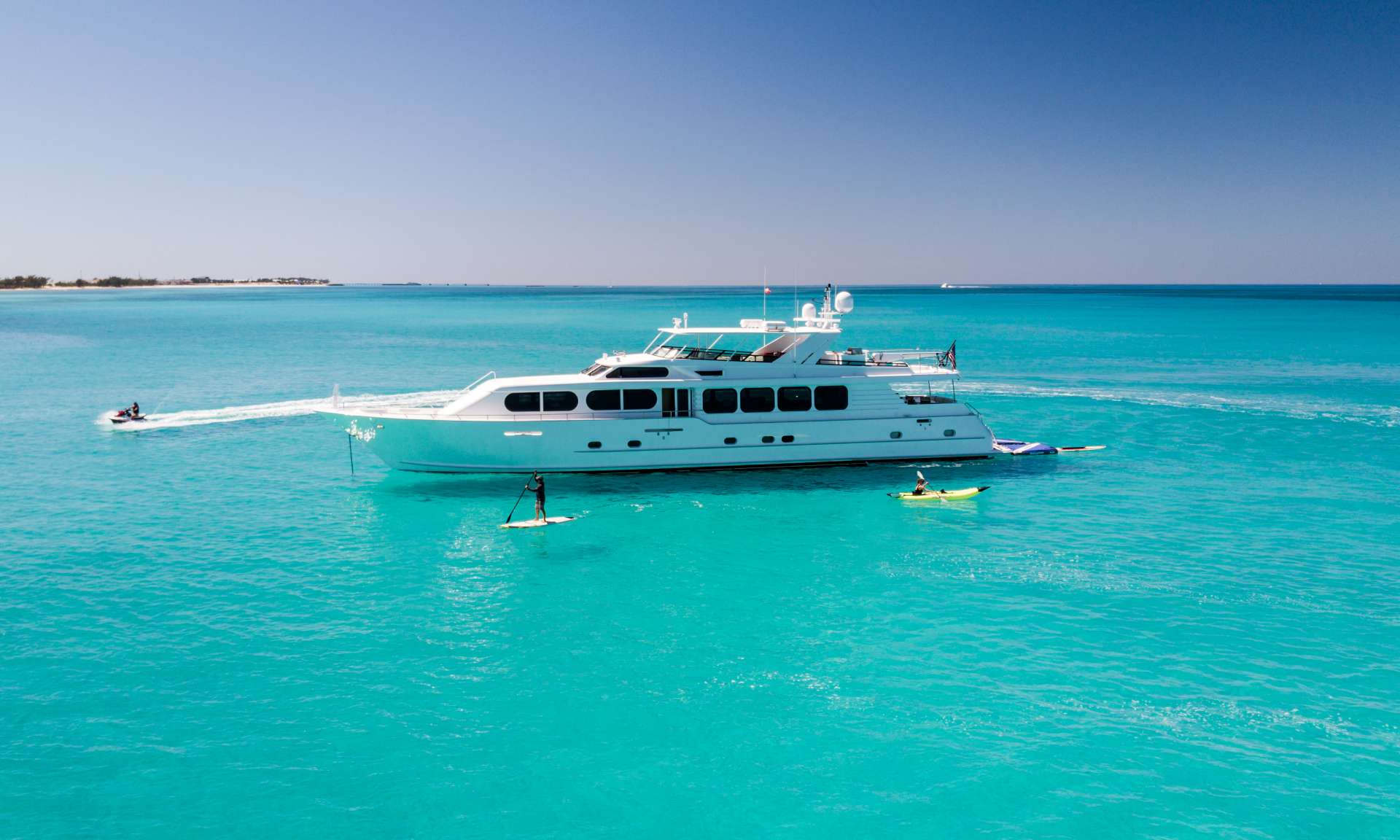 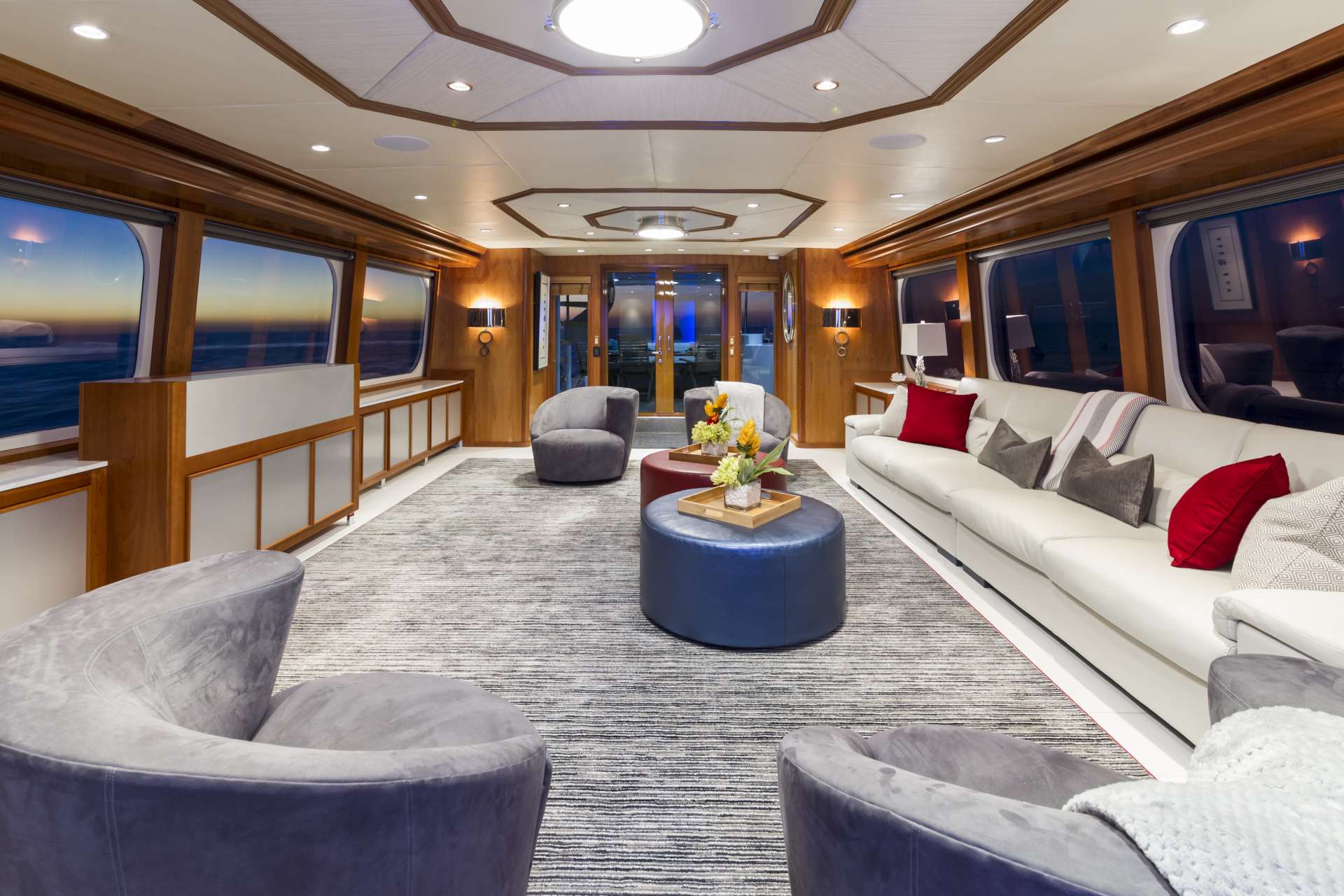 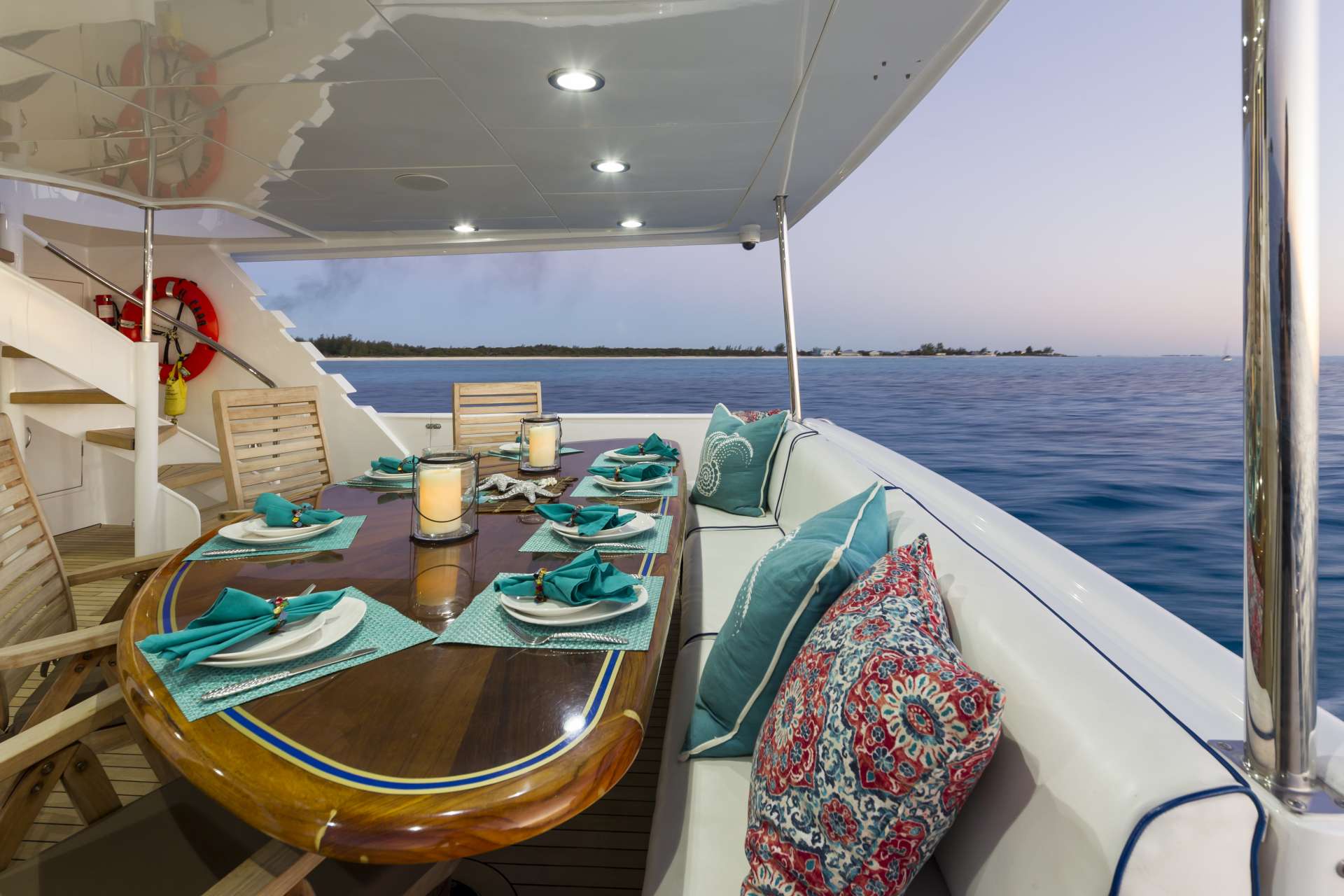 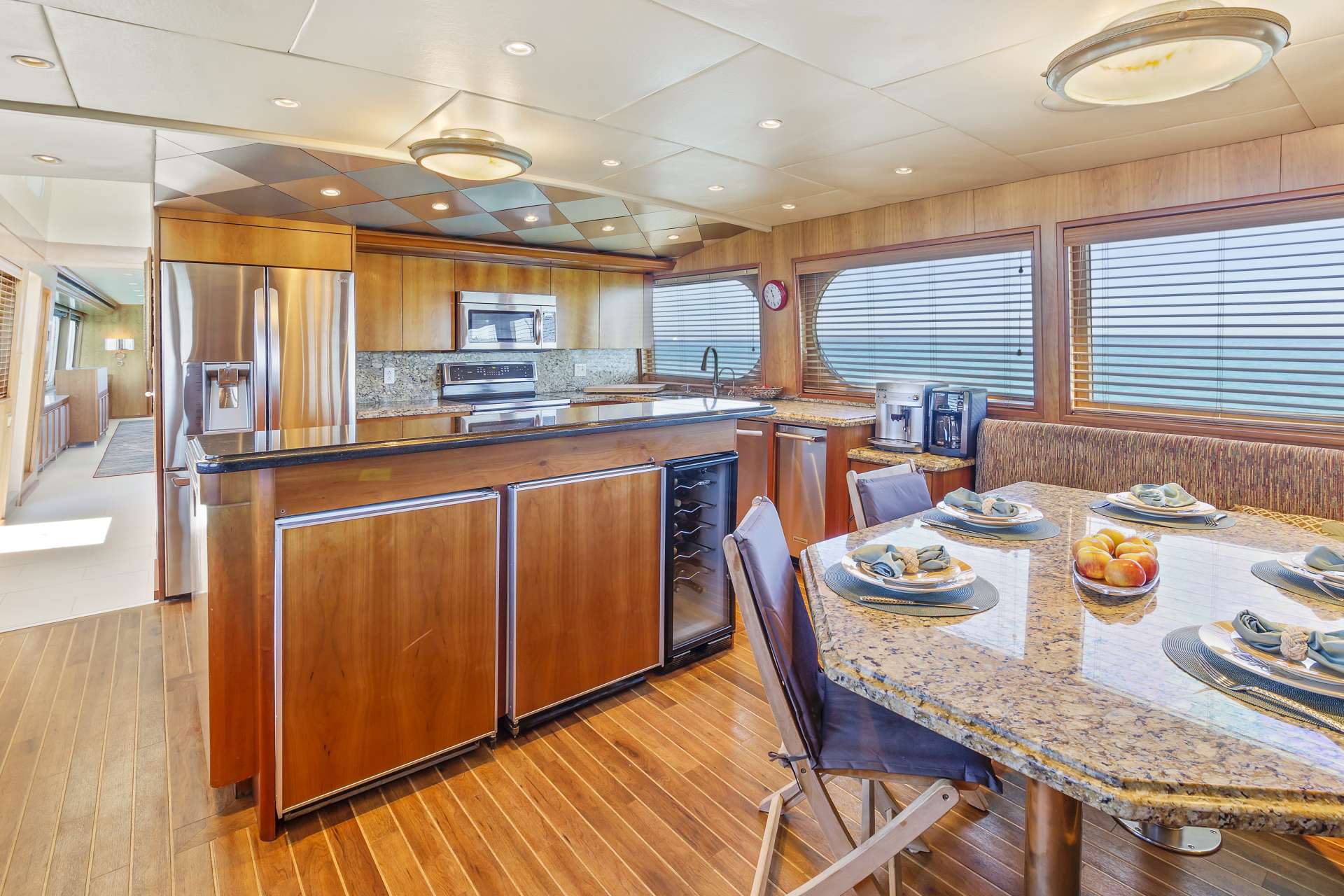 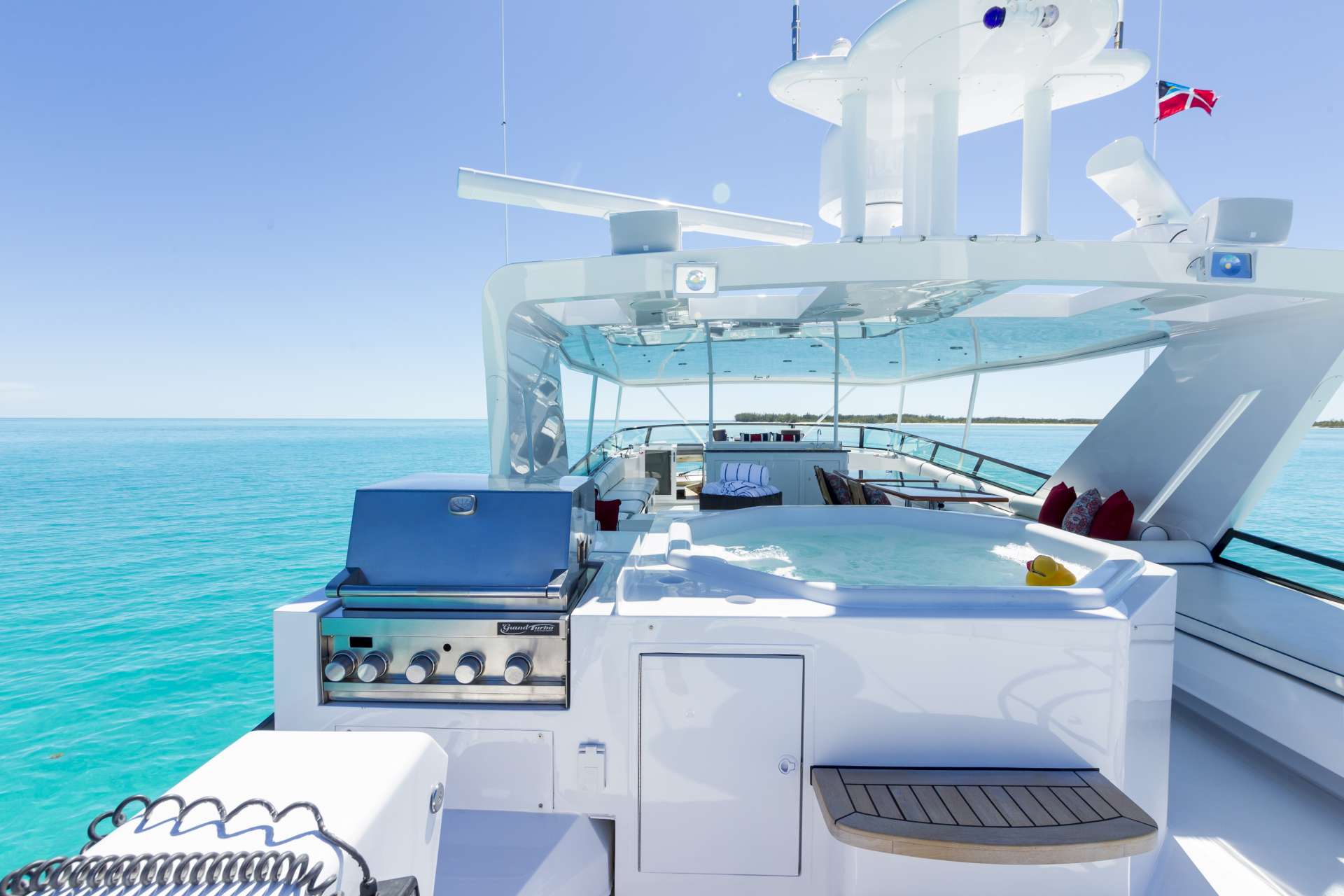 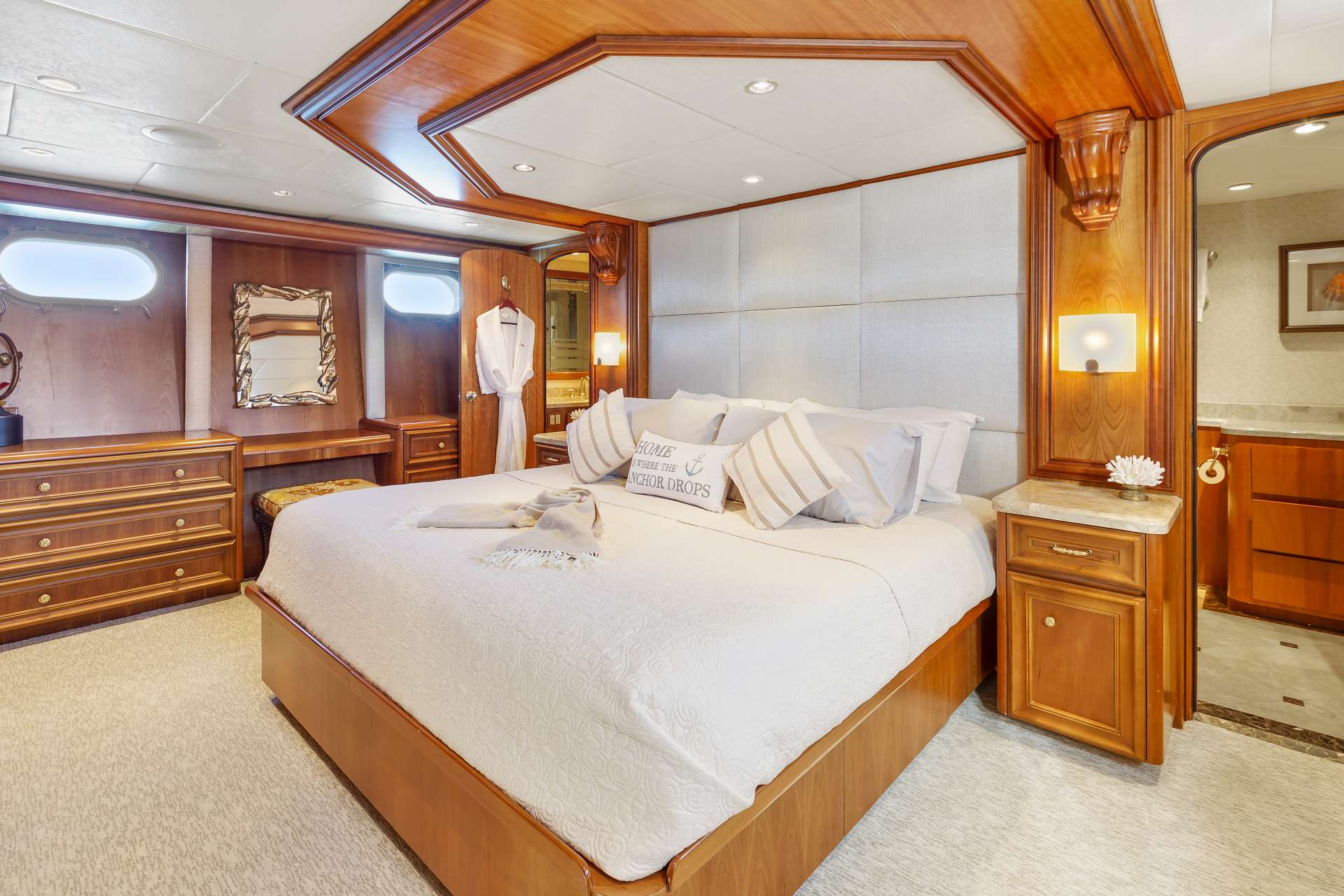 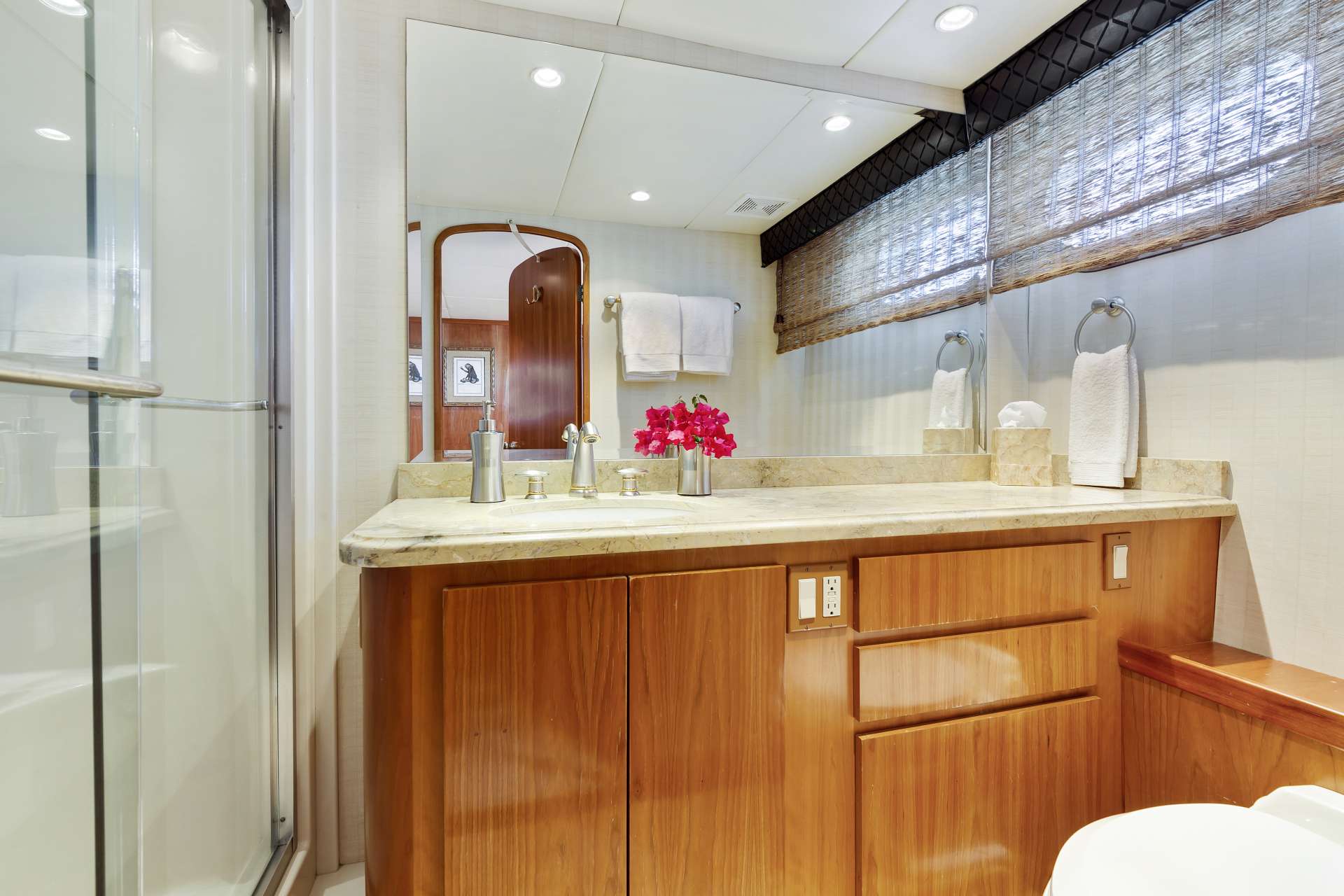 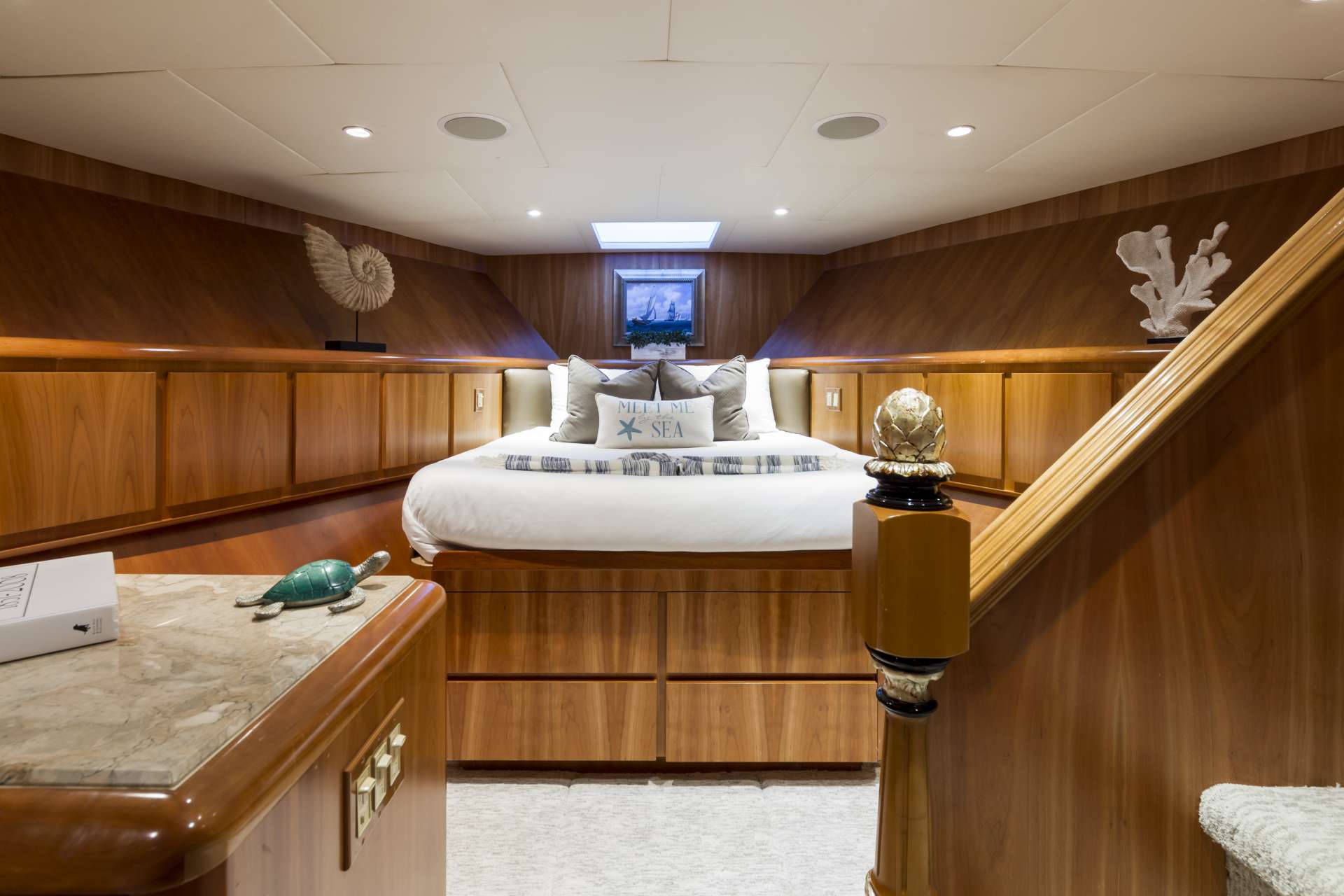 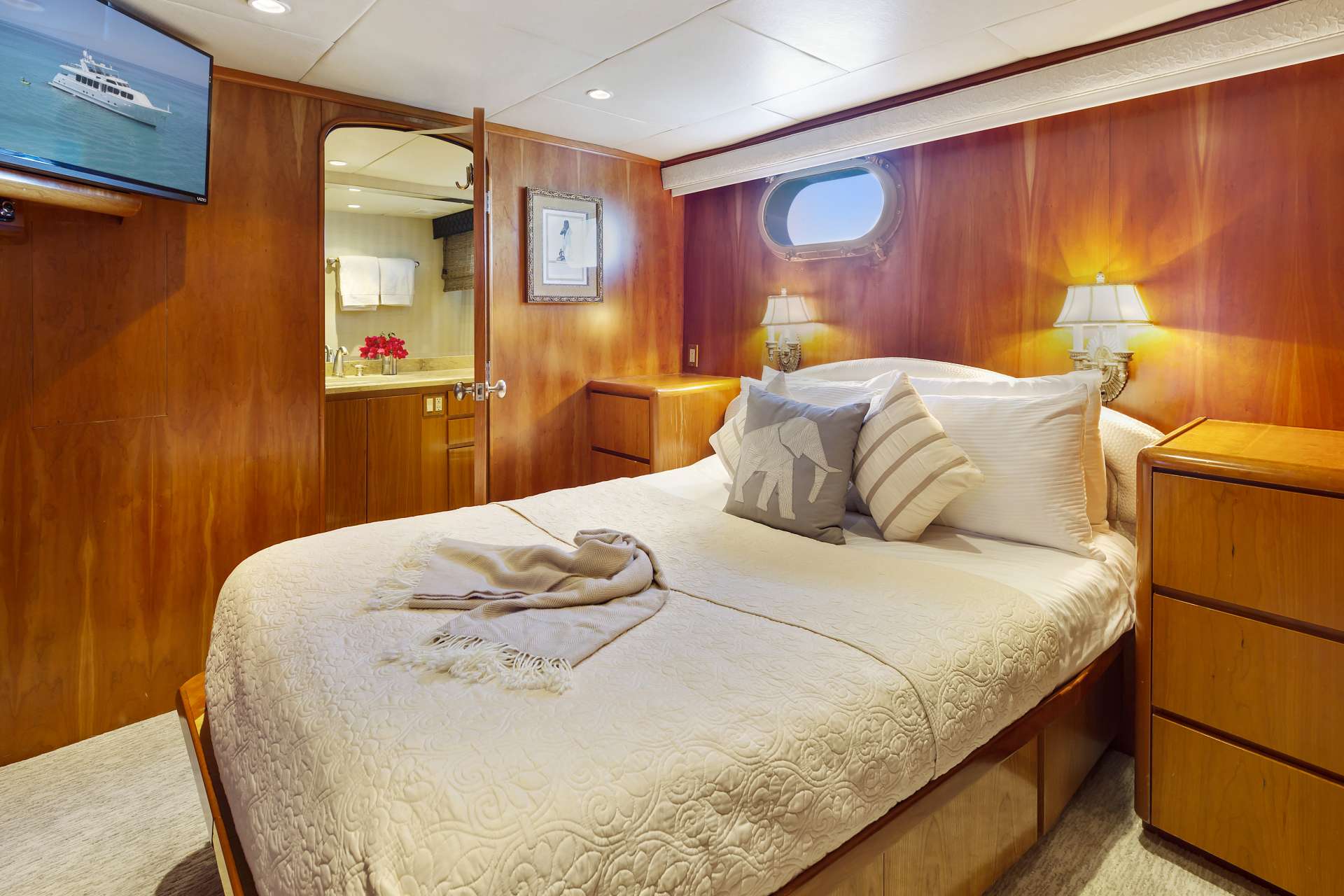 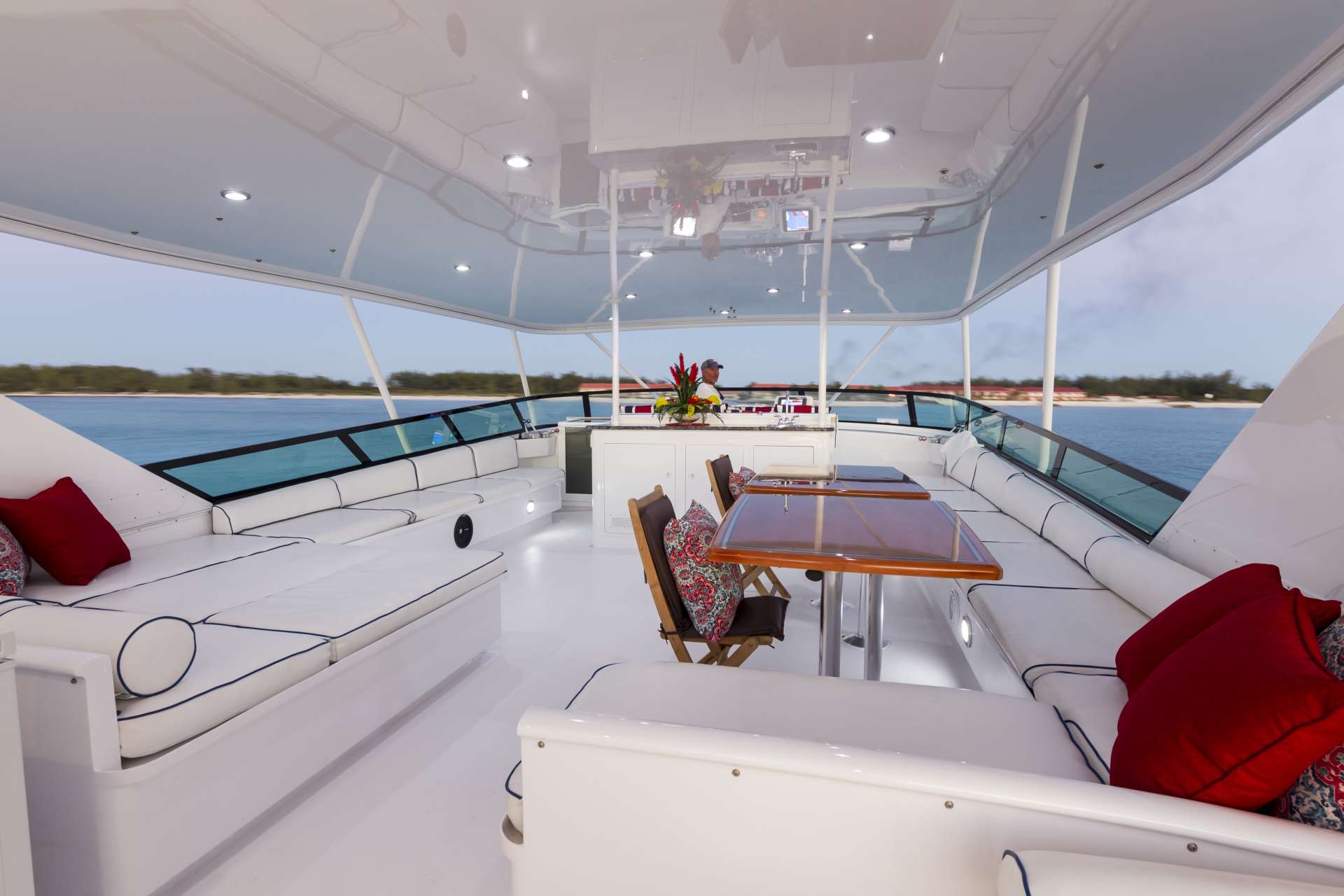 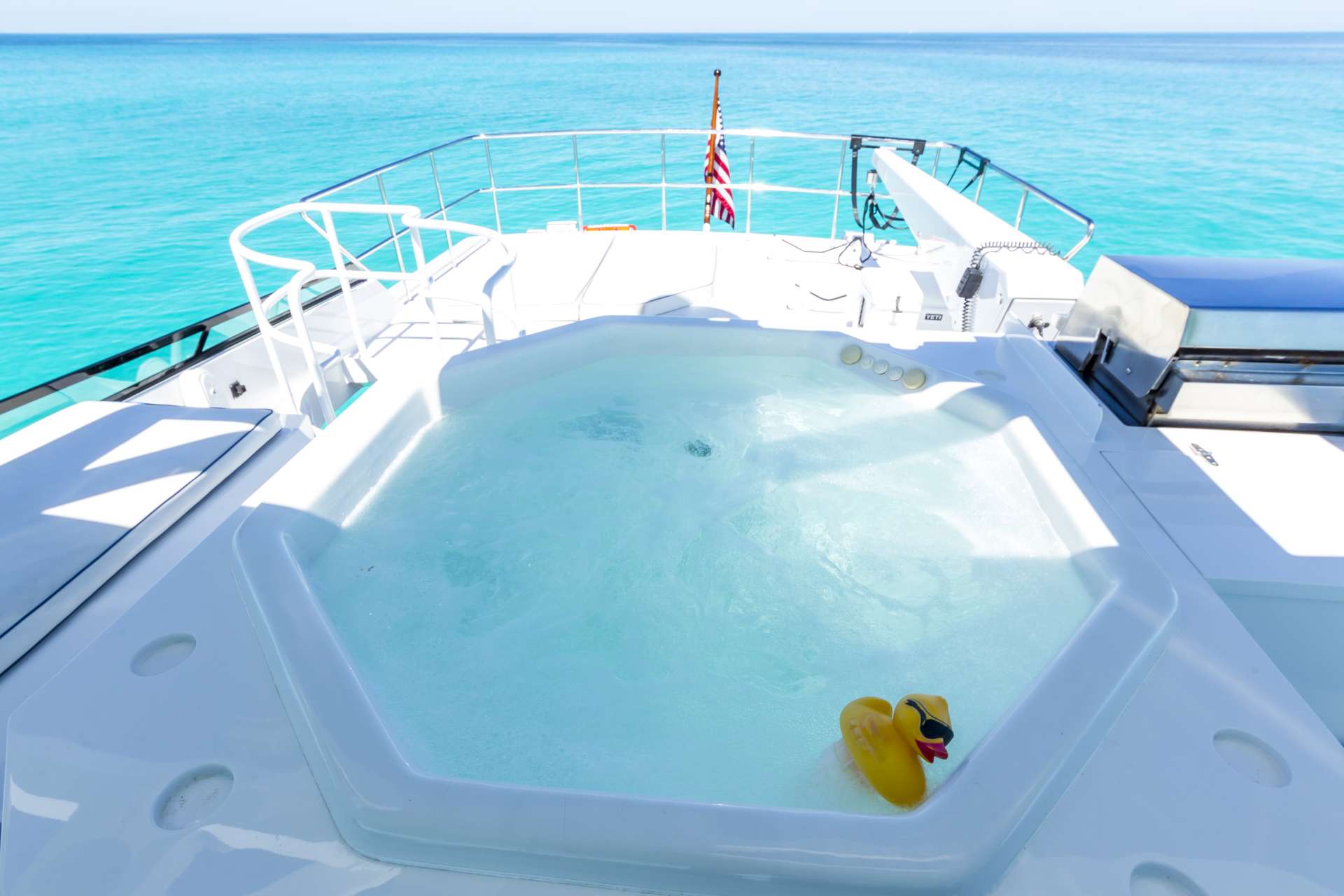 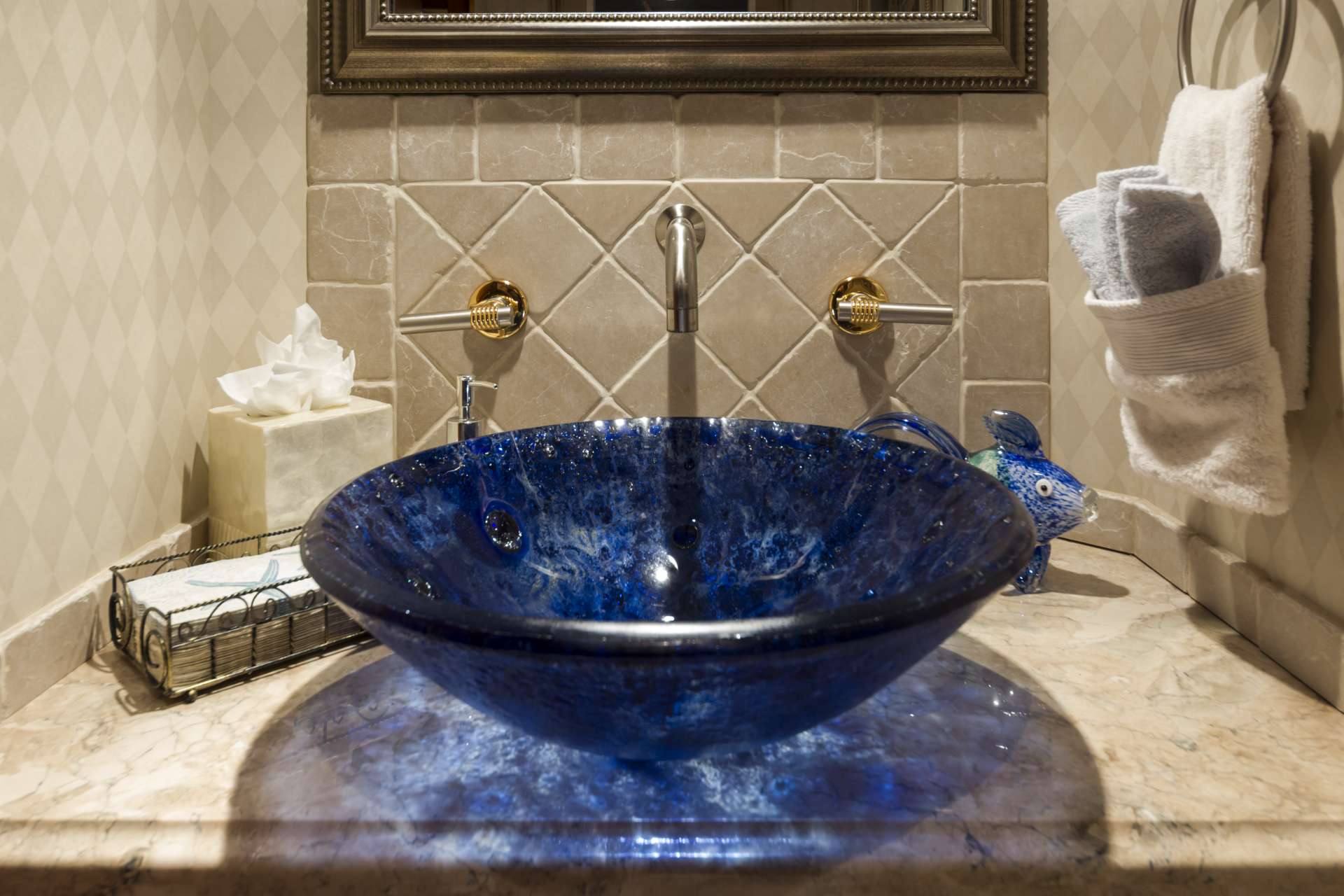 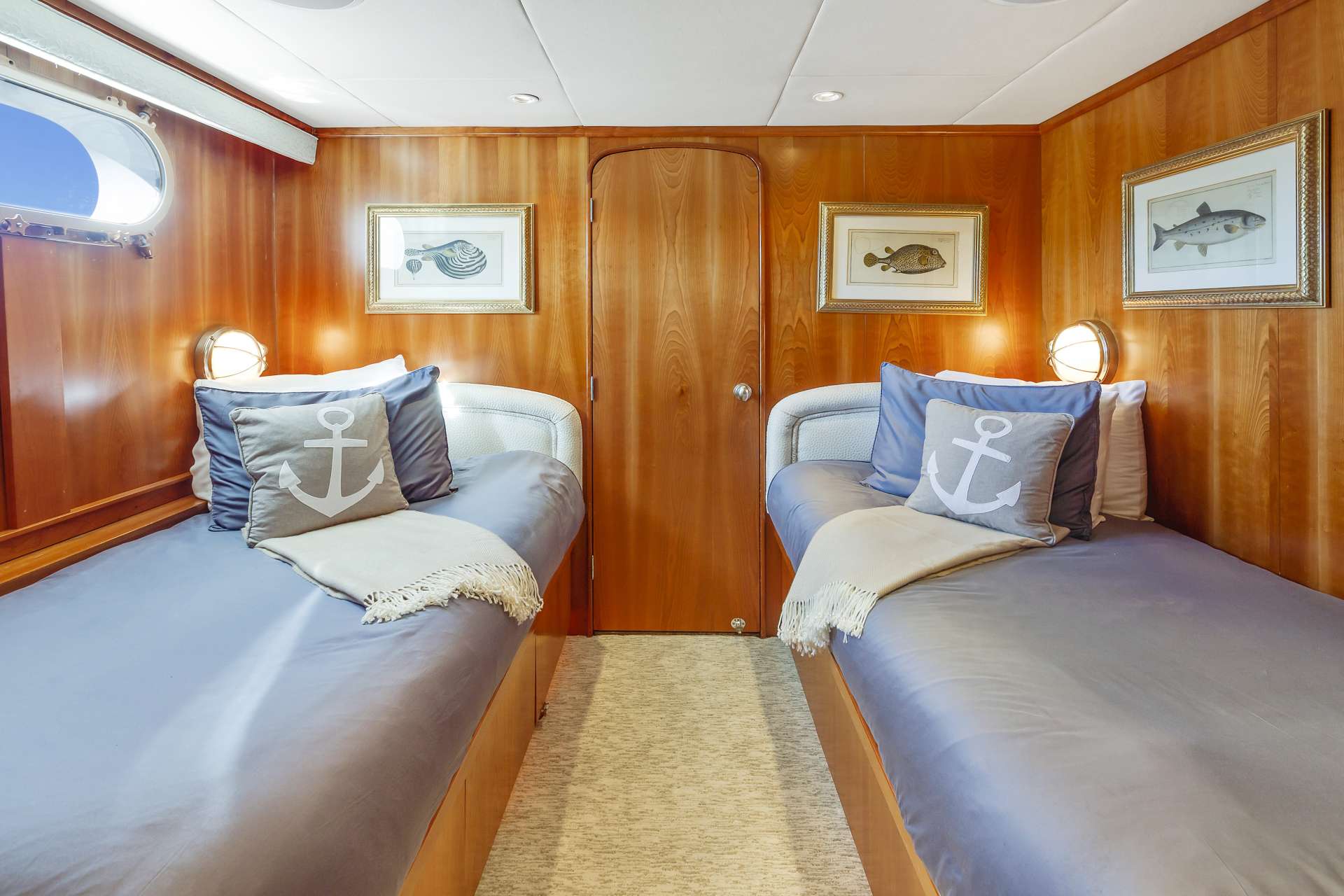 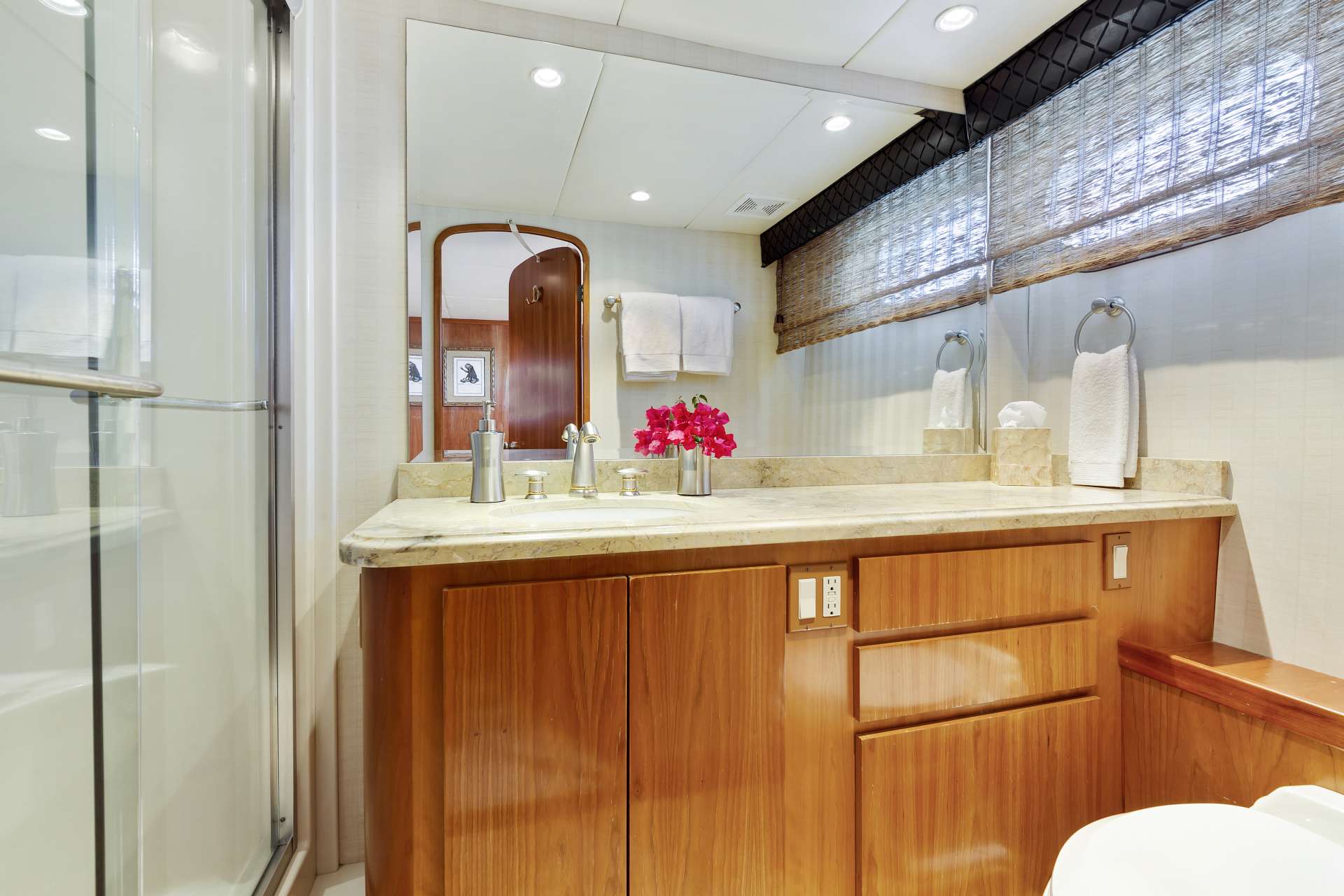 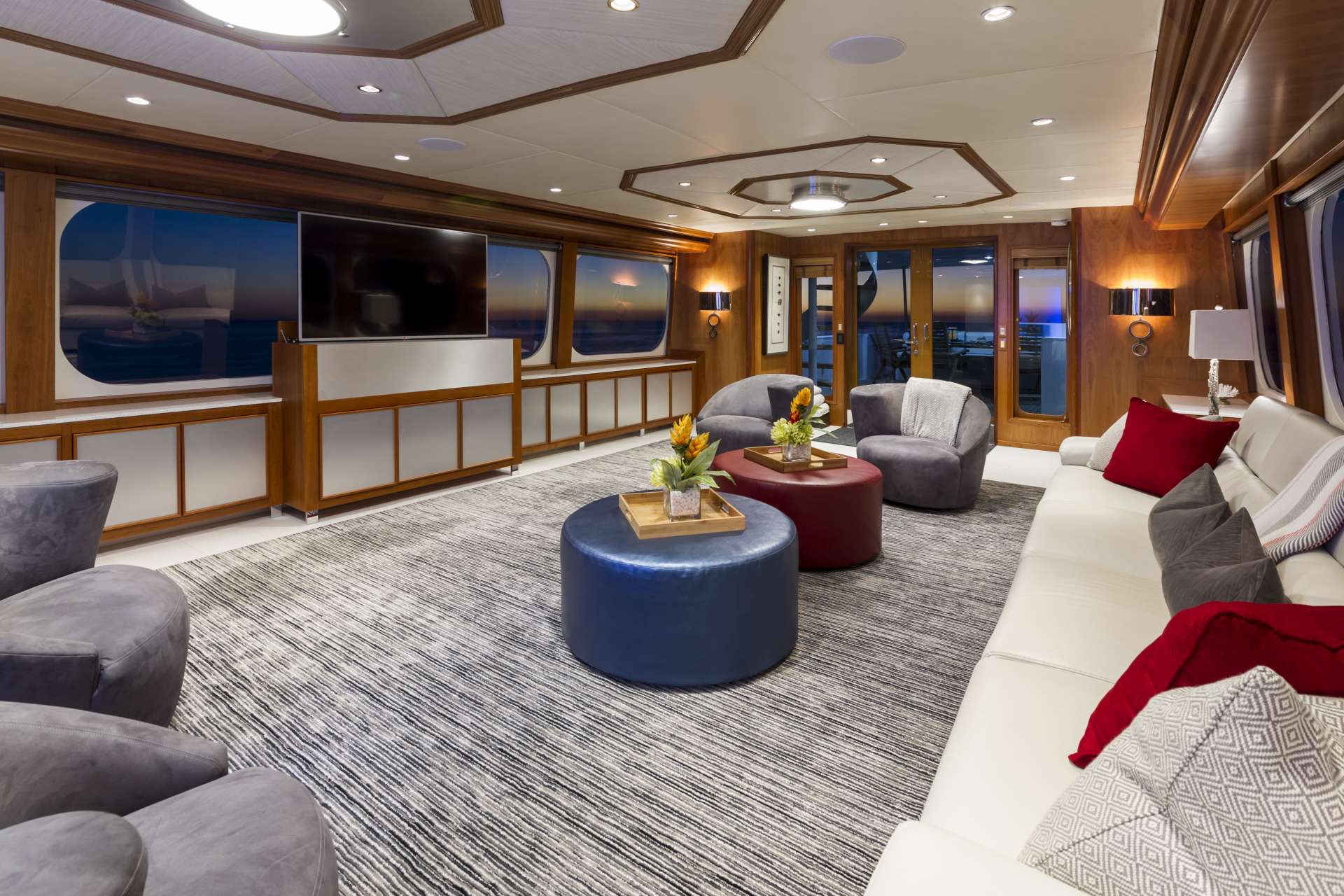 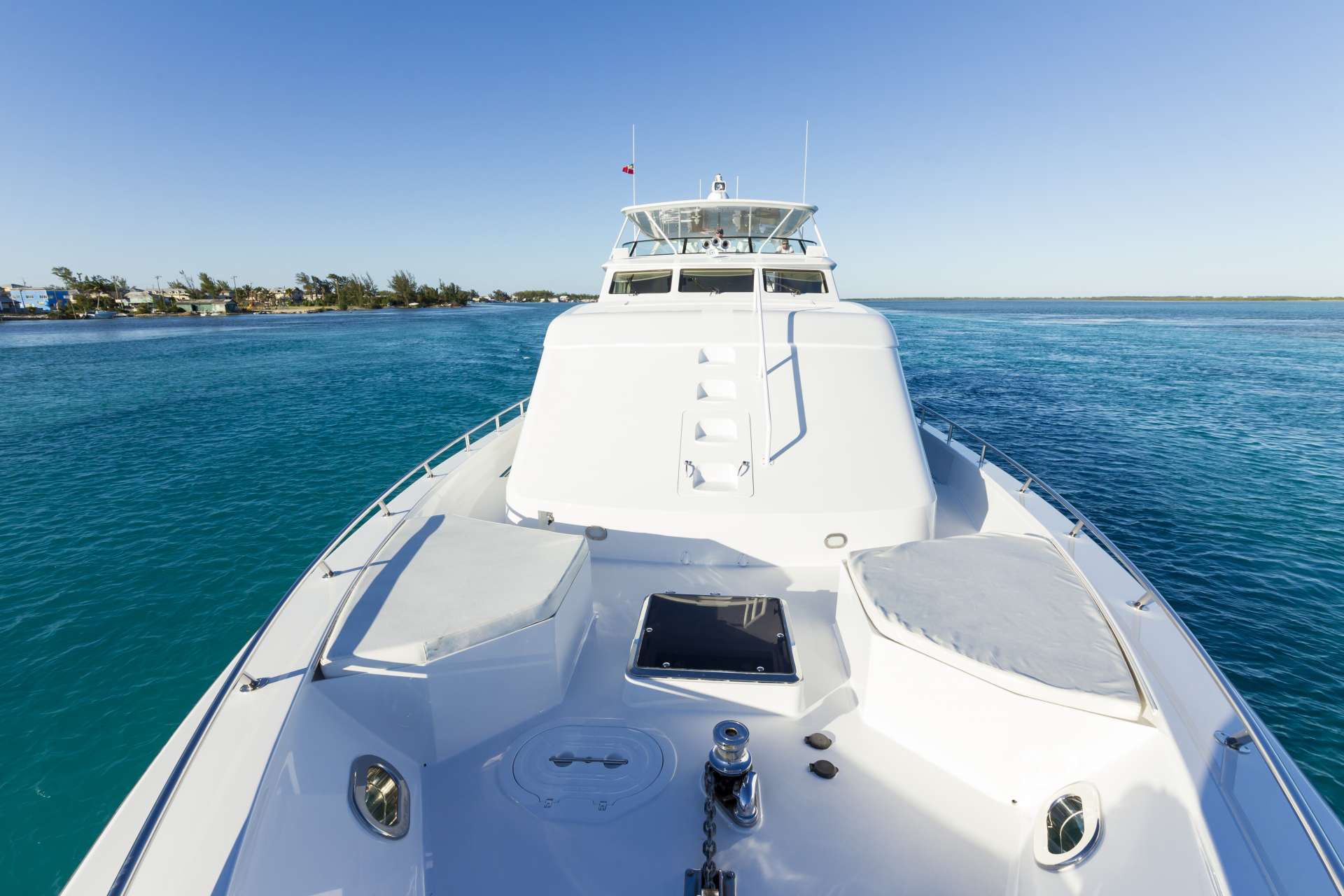 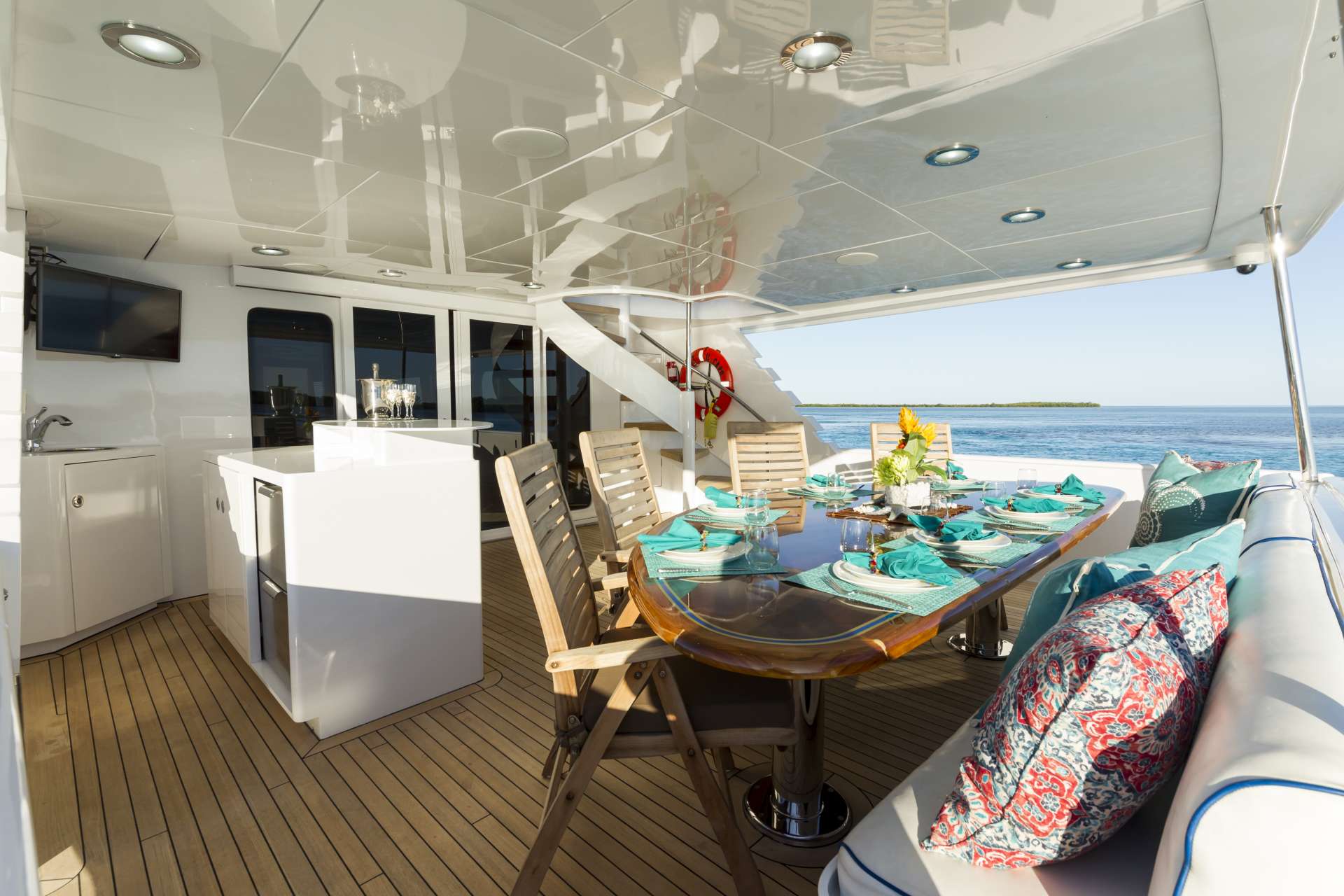 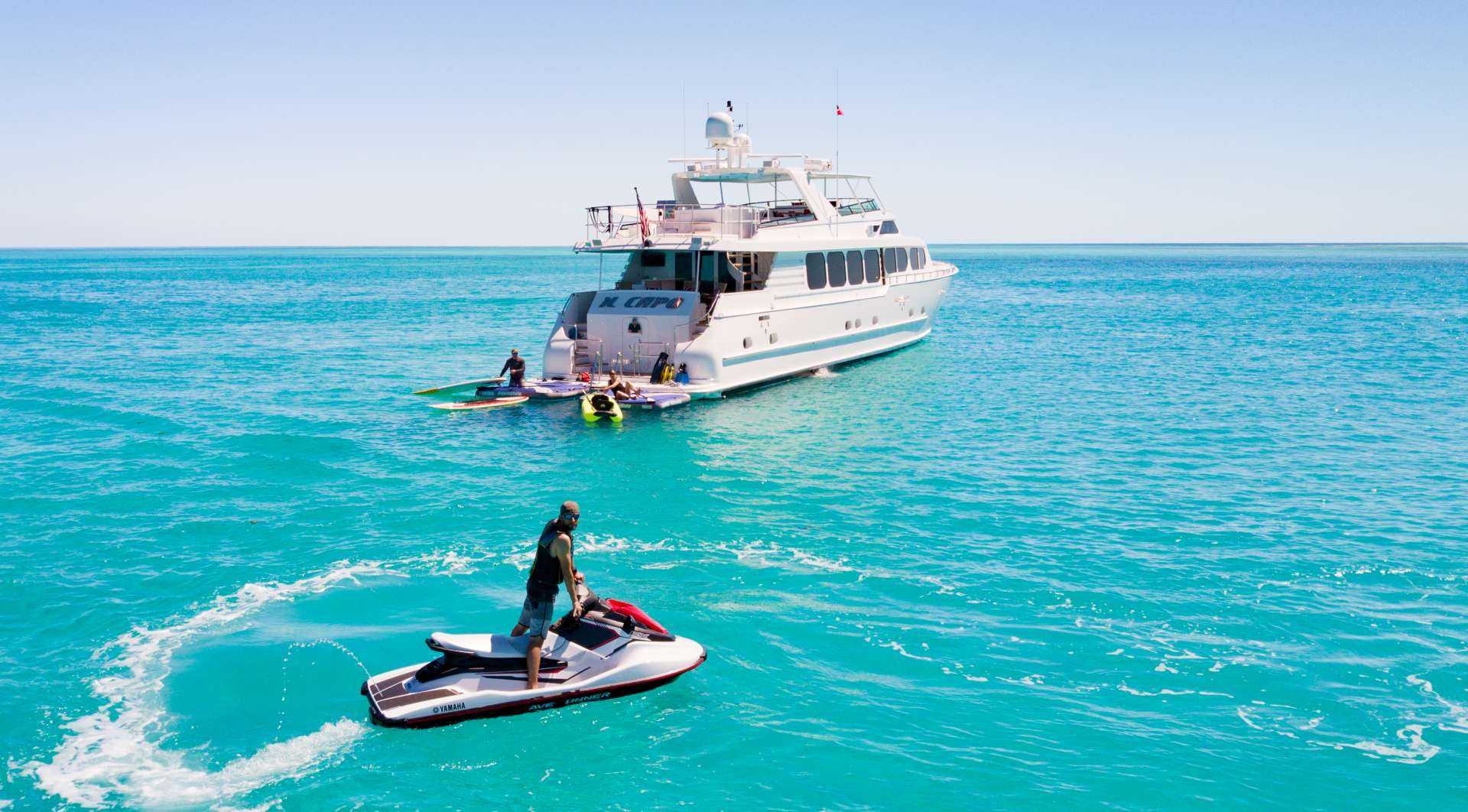 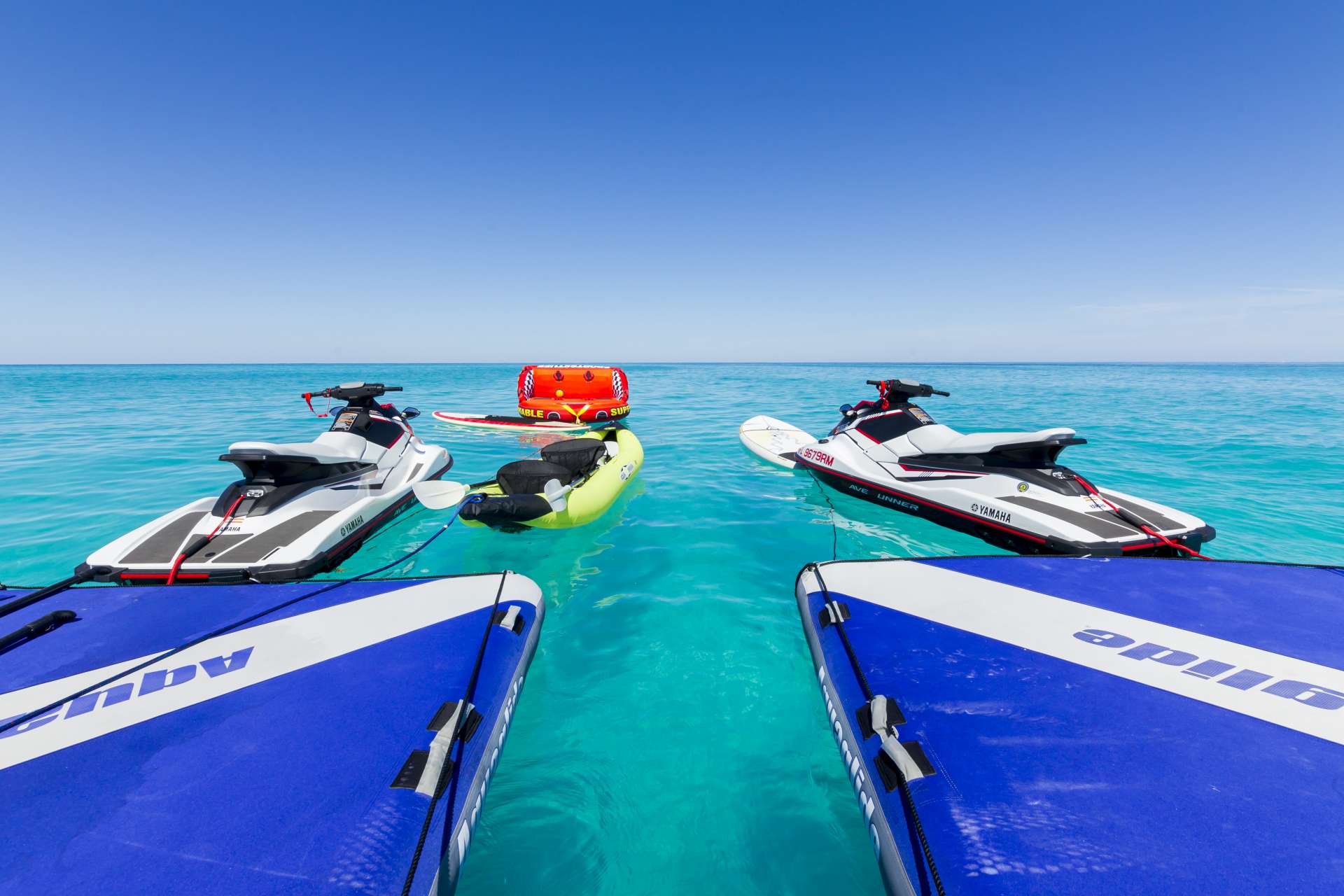 With a brand new interior, IL CAPO is easily one of the youngest Browards available at present.

Enter the main salon from the aft deck through sliding glass doors. Enter the full-beam salon has light wood paneling, entertainment system and large windows for lots of natural light. For al fresco dining, the covered aft deck offers a table with seating for eight (8). Port and starboard stairways lead down to the swim platform. The transom allows access to the crew’s quarters, which have accommodations for 4-5 including a private captain’s cabin and crew mess area.

Access to the staterooms is forward to port and there is an on-deck day head to starboard. The “country kitchen” style galley is forward and has an informal dining settee to port and companionway leading to the VIP stateroom to starboard. The raised pilothouse can be accessed from both port and starboard. The master stateroom is full-beam amidship with centerline King-size bed and His & Her Baths featuring a custom “walk-by” shower. There are 2 guest staterooms both with ensuite head and shower. The port guest stateroom has a queen size bed and the starboard stateroom has two twin beds. The VIP stateroom is very private with separate entry forward of the galley. It has a centerline queen-size bed and ensuite bath with shower. All staterooms have entertainment centers, ample storage and cedar-lined closets.

The flybridge can be accessed both from the aft deck or through the pilothouse. This is an especially comfortable area is equipped with hard top and banquette seating surrounding a table for ten (10). On the aft deck is a nice lounge area with all new deck furniture. There is a professional-grade stainless steel grill with rotisserie, wet bar, Jacuzzi and sun pad area. Forward is a fully equipped helm & wing stations.

Captain – Wesley Trowell
Captain Wes started his passion for boating, fishing, and watersports at a very young age. Wesley would go out on his Dad’s boat doing all kinds of fishing and sports on the weekends. As his knowledge grew, so did his passion for fishing. He began entering small fishing tournaments with his dad and from there started his profession on the water. He managed a marine store in South Beach and was a fishing mate on his days off for Bouncer’s Dusky 33 out of South Beach. He has worked on all kinds of super yachts knowing how to give guests Five Star service. He started running his own yachts as captain such as an 80’ sport fish, were he fished high end tournaments. Wesley currently lives in Melbourne, FL with his wife and two kids, where he previously owned a jet ski/boat rental in Cocoa Beach for seven years. Wesley has been working on super yachts for 20 years and has been all over the Bahamas, Mexico, Caribbean, Canada, Florida east coast, west coast, Cuba, and many more places.
He is a well respected family man and loves kids.

Chief Stewardess – Emily Durso
Emily was born and raised in Long Island, New York less than a mile from the beach. Living so close to the water has taught her to love the sea and everything it has to offer. Emily studied hospitality and finished her education with a degree in Tourism Management. She began her maritime career working on Royal Caribbean Cruise ships and has always had a passion for travelling. Since landing her first yacht job, Emily has been to 17 different countries. Her favorite place she’s ever been is Thailand where she went diving with whale sharks. She loves meeting people from around the world and looks forward to creating the best experience for all guests!

First Mate – Ryan Lynch
Ryan is from Long Island, New York. After growing up close to the water Ryan knew he wanted it to be a part of his career. He attended the Marine Mechanic Institute in Orlando Florida and shortly after began Yachting. Ryan has been in the industry for 3 years in which time he has traveled to several different Islands in the Bahamas. His charter experience and passion for all outdoor sports adds a fun atmosphere to our crew. Ryan is always ready to take on a new adventure and looks forward to sharing it with others!