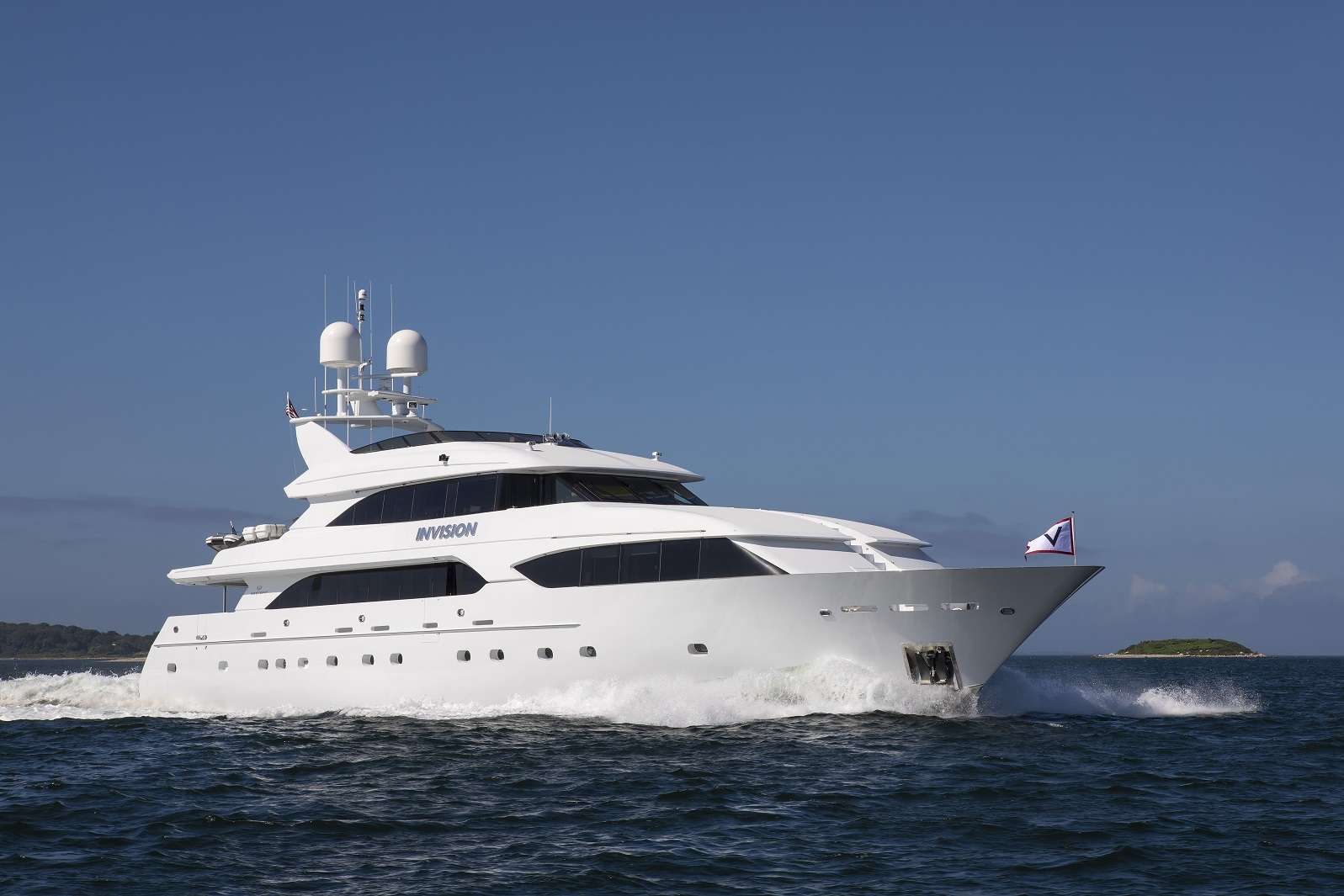 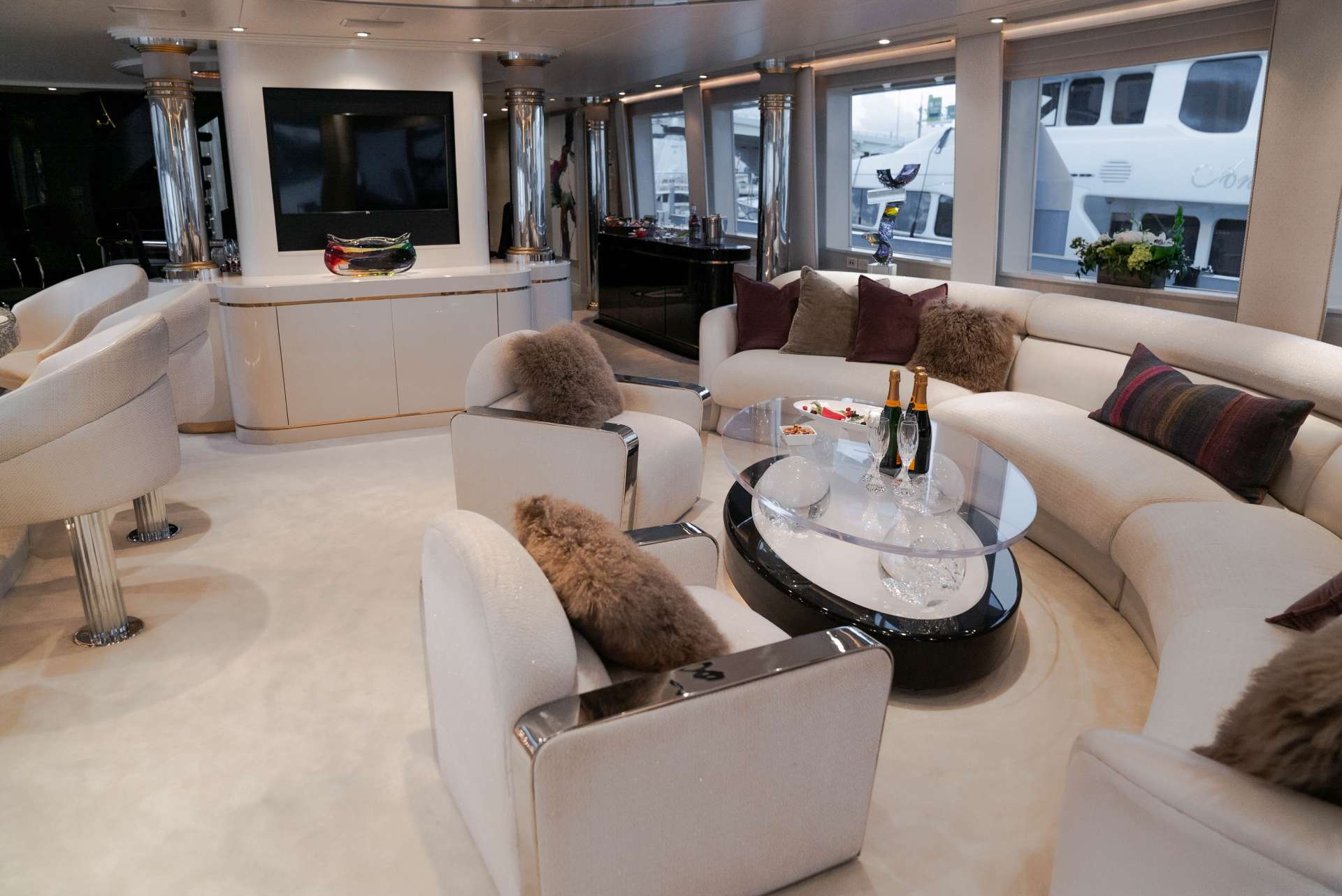 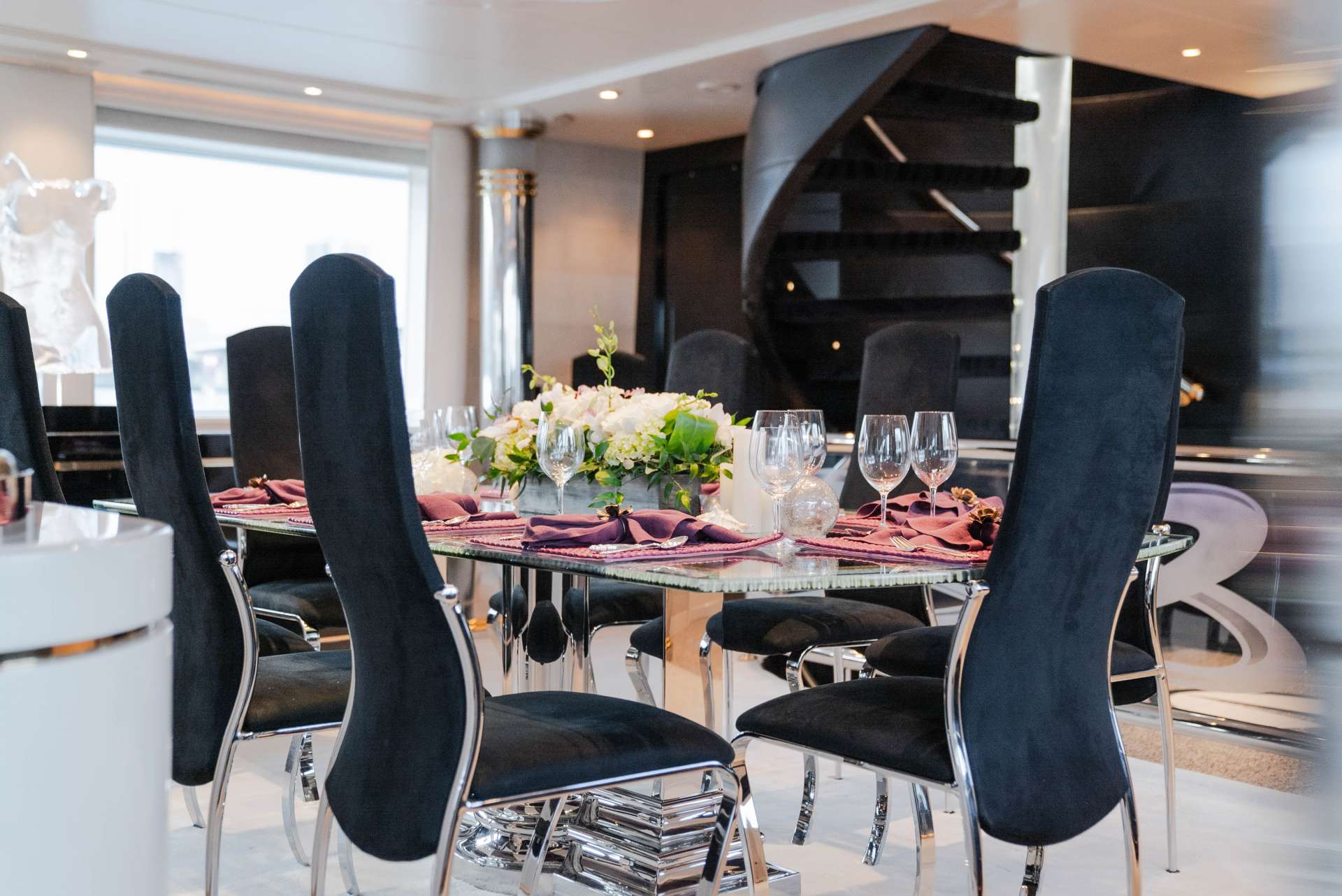 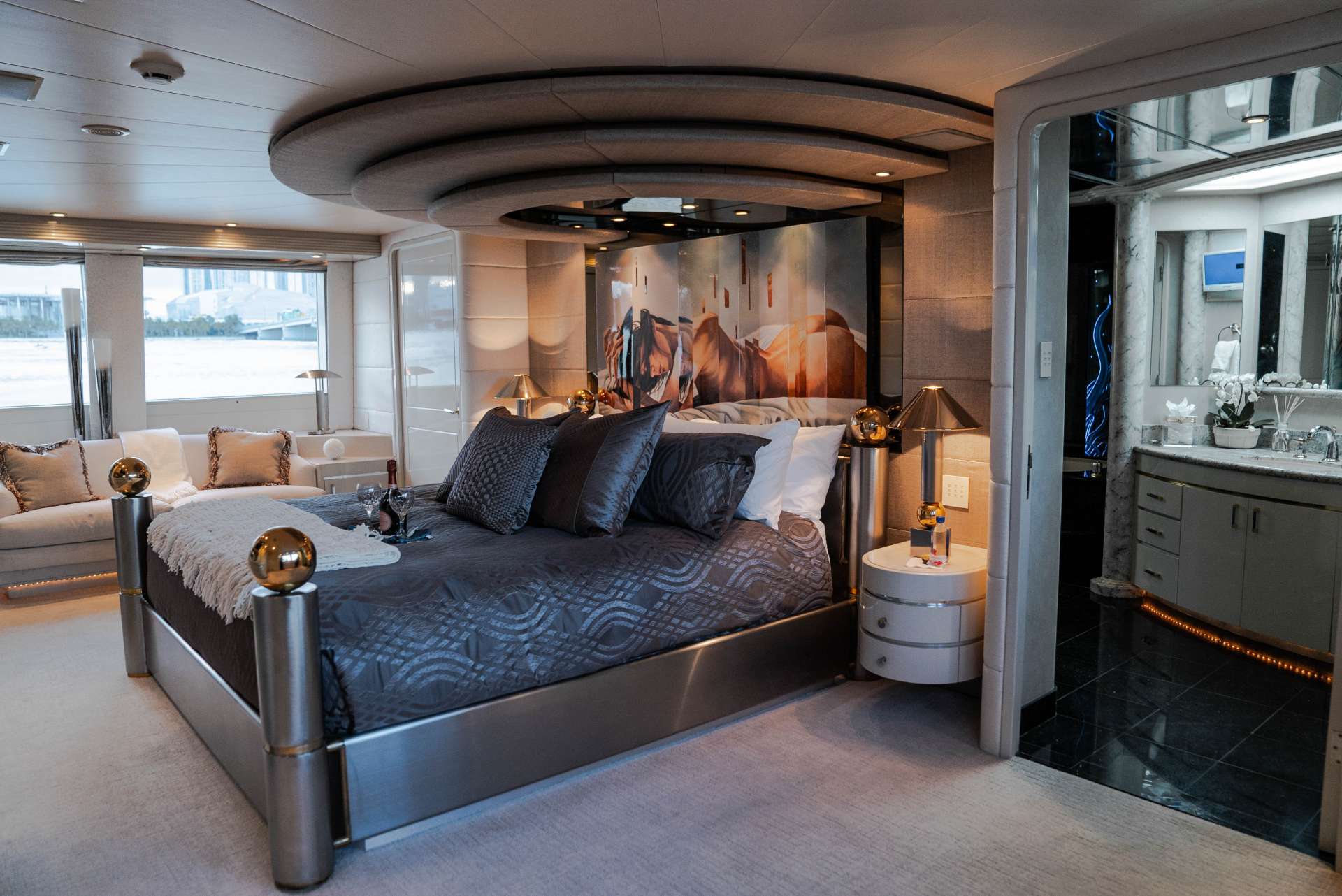 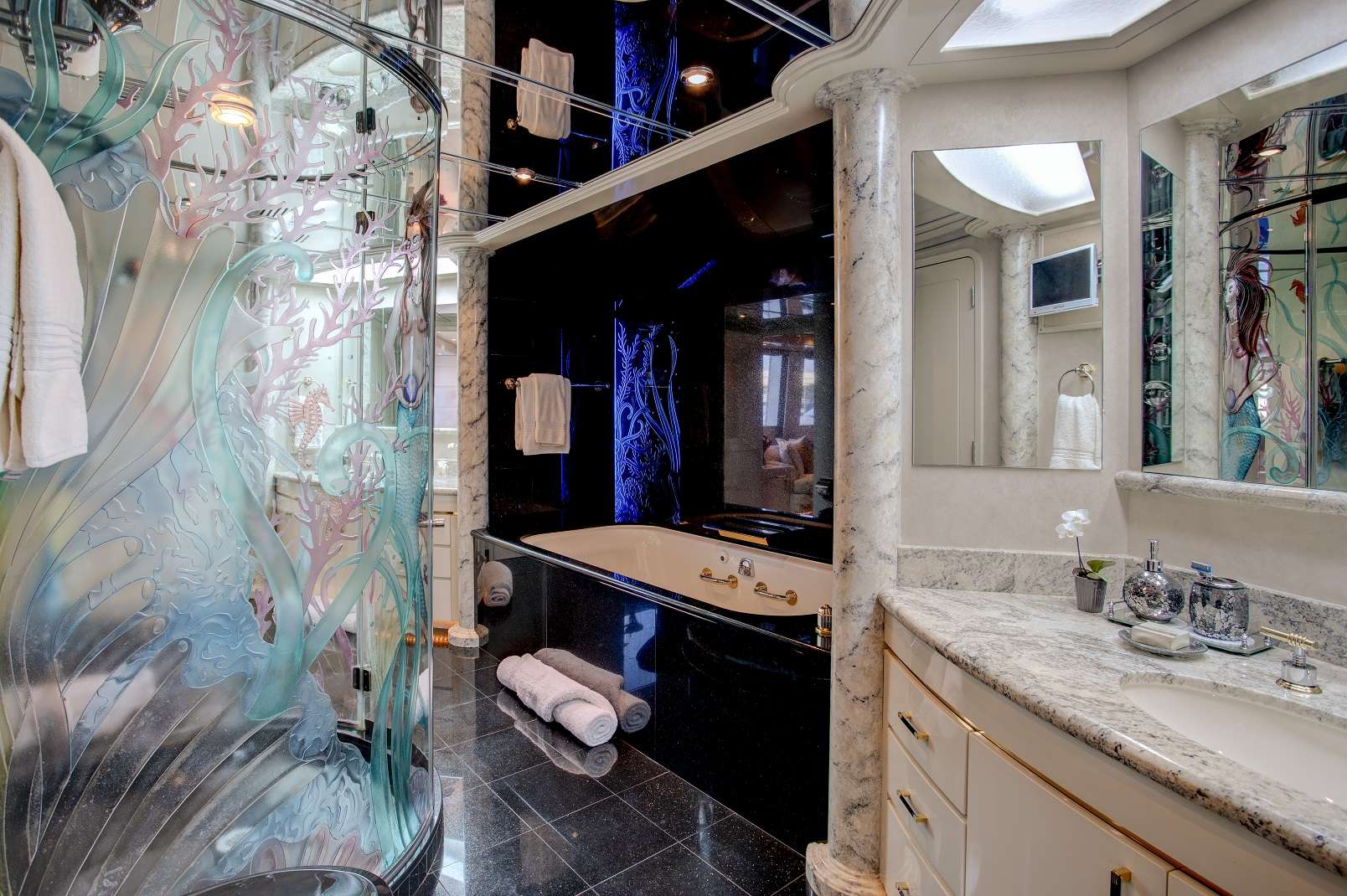 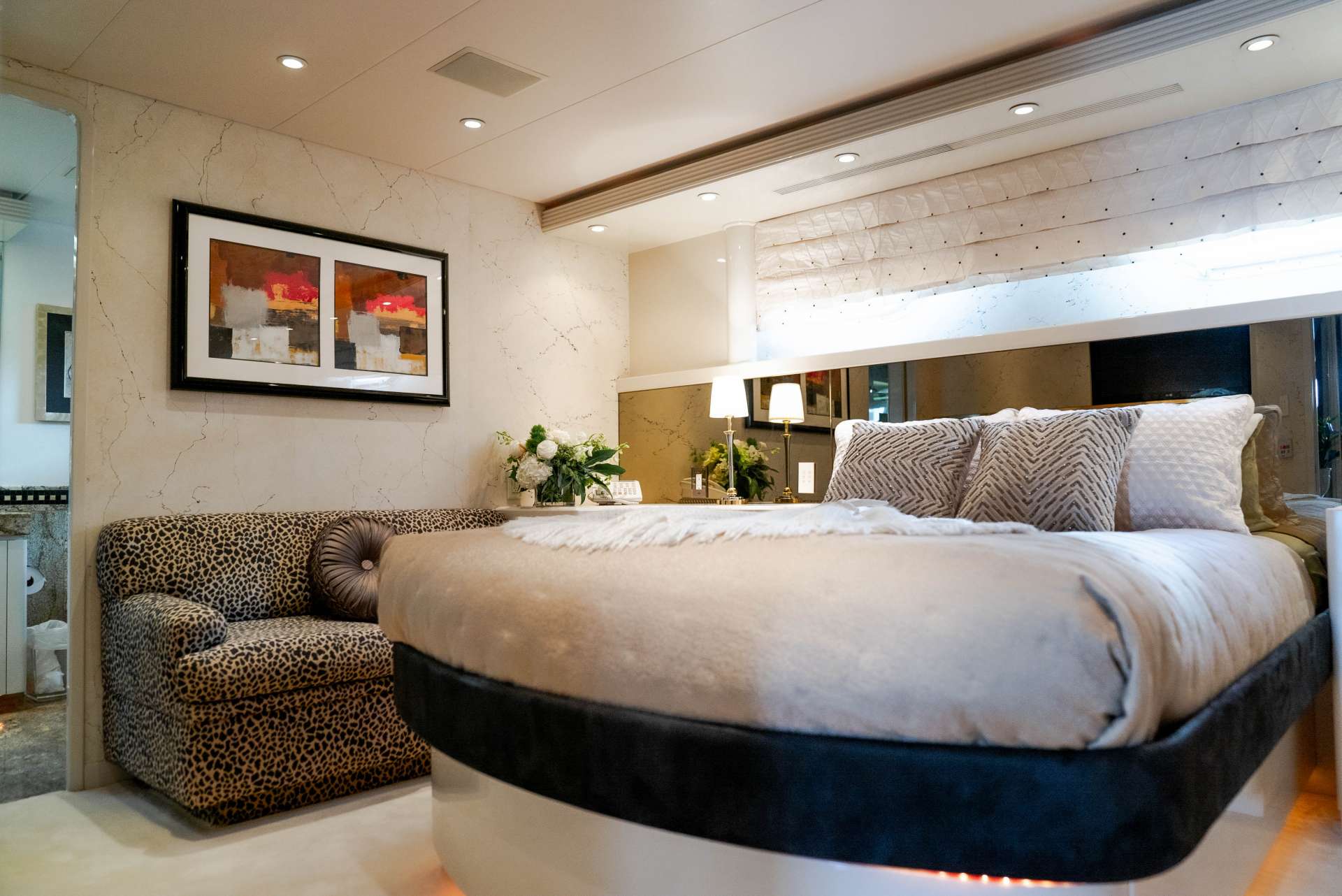 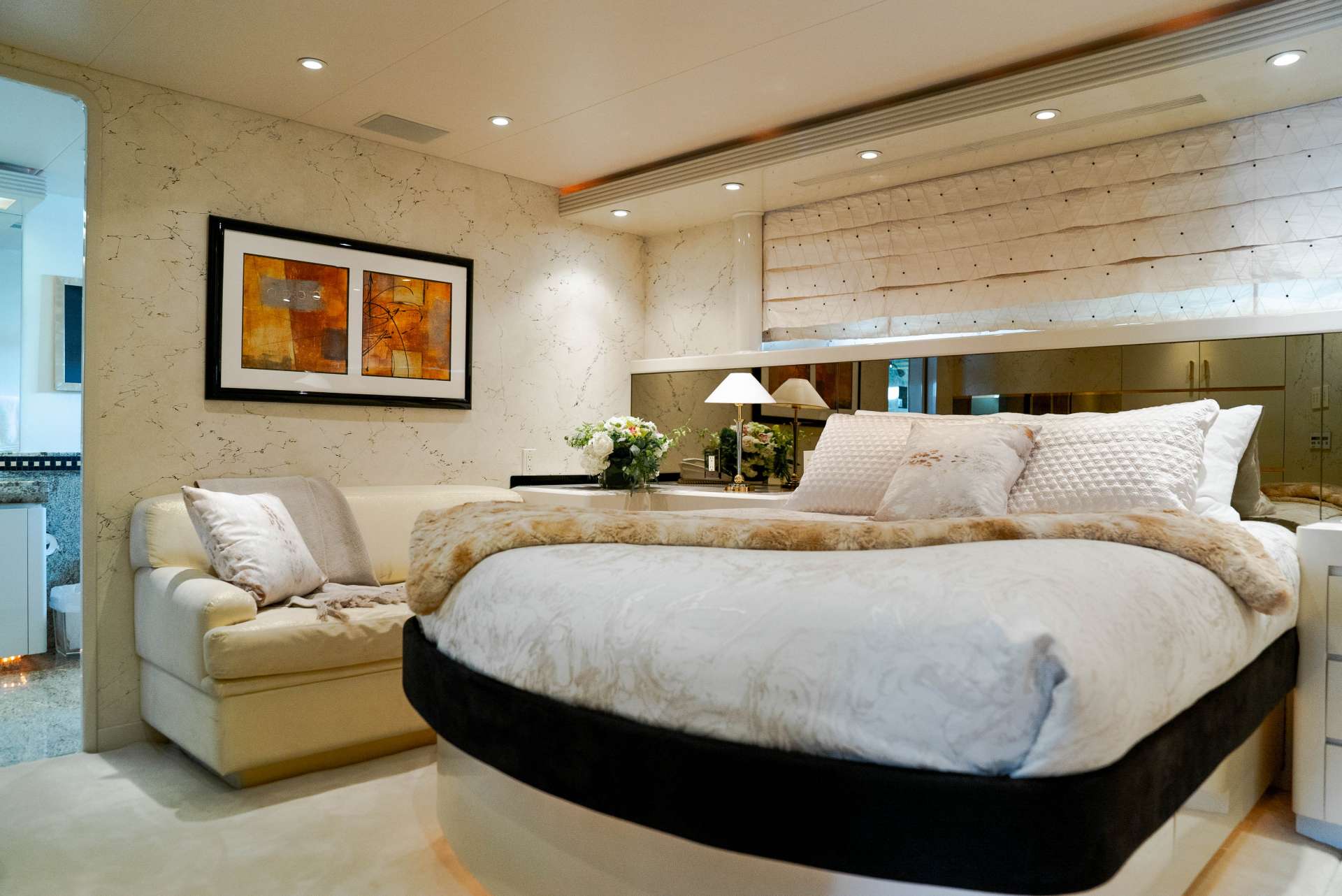 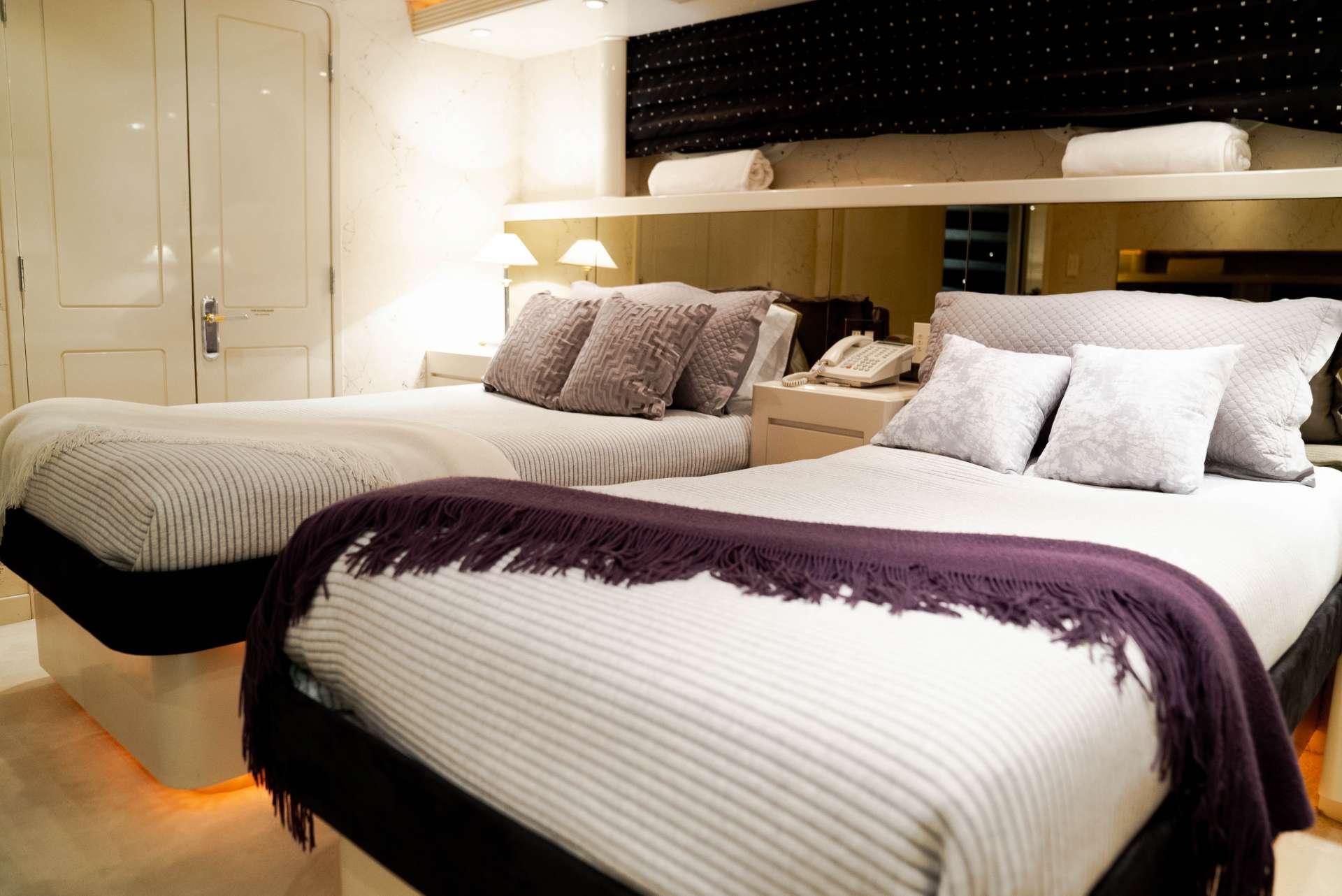 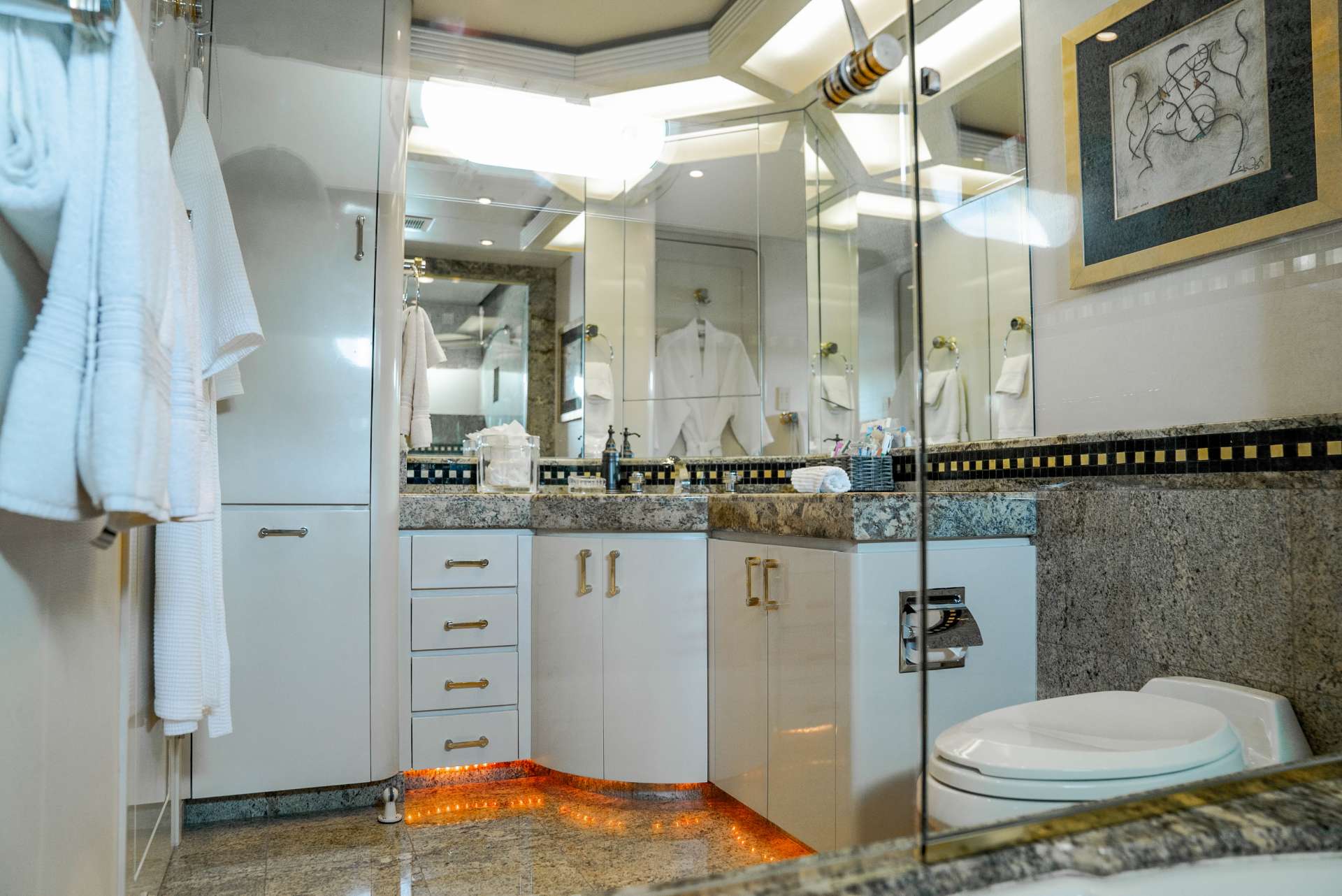 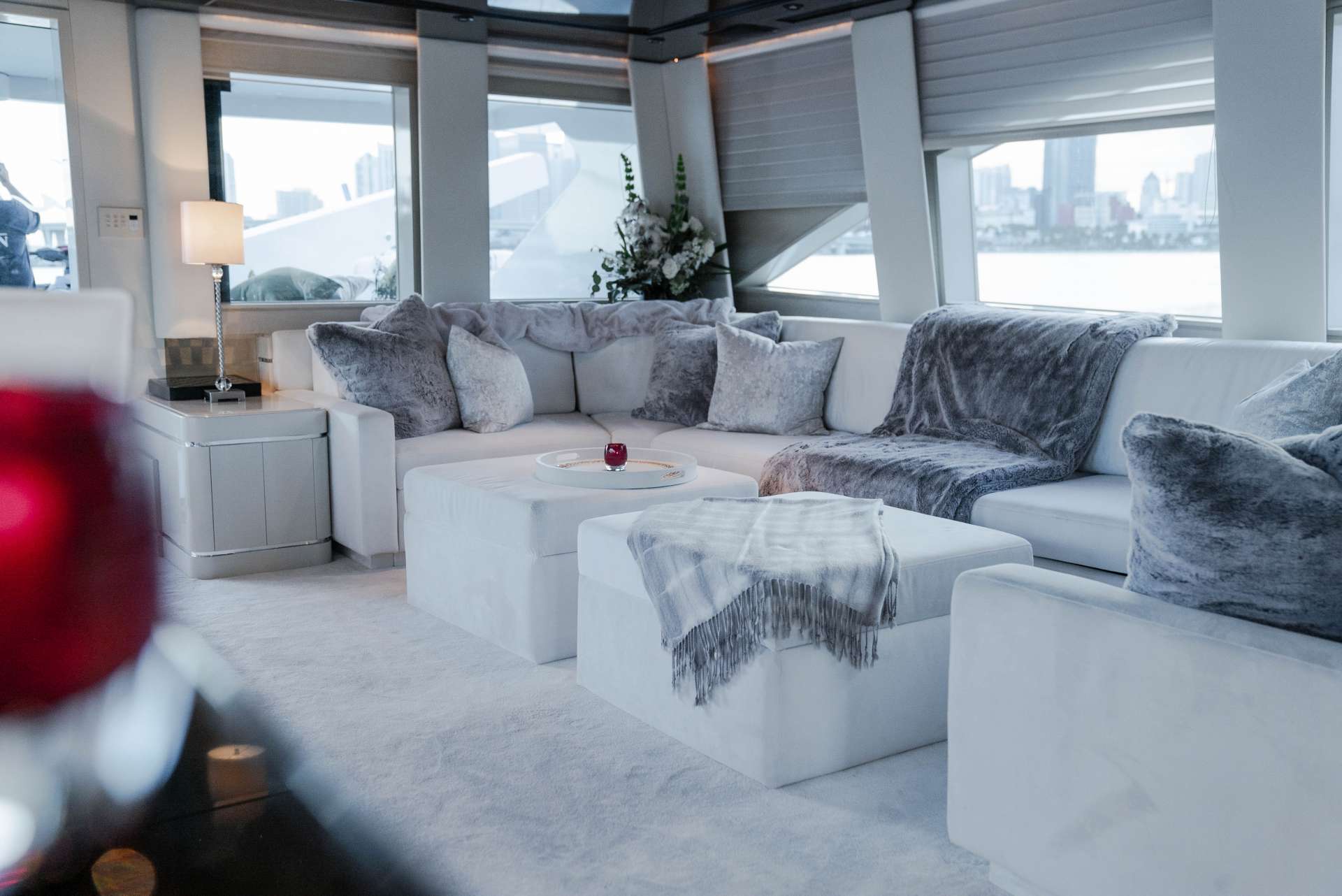 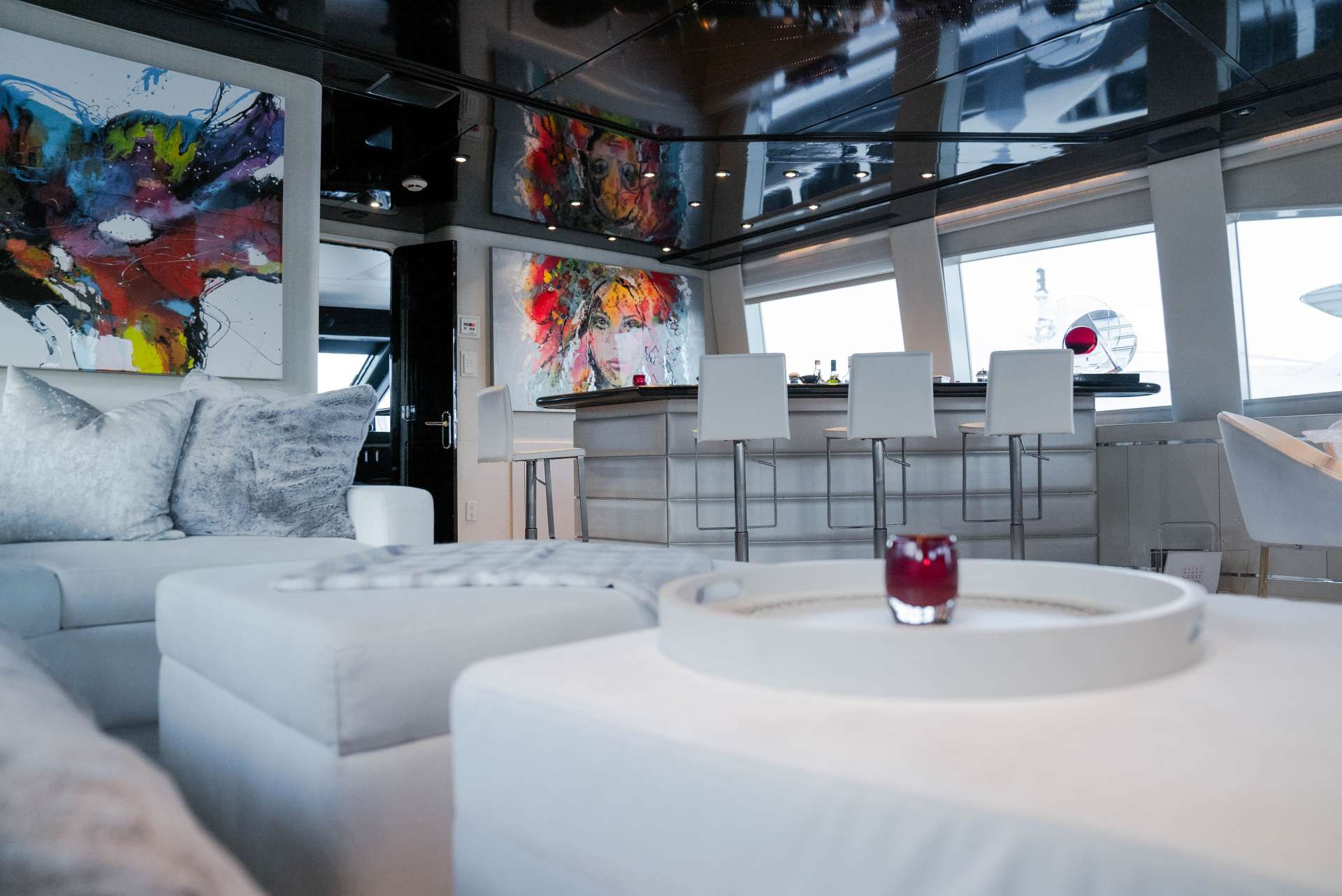 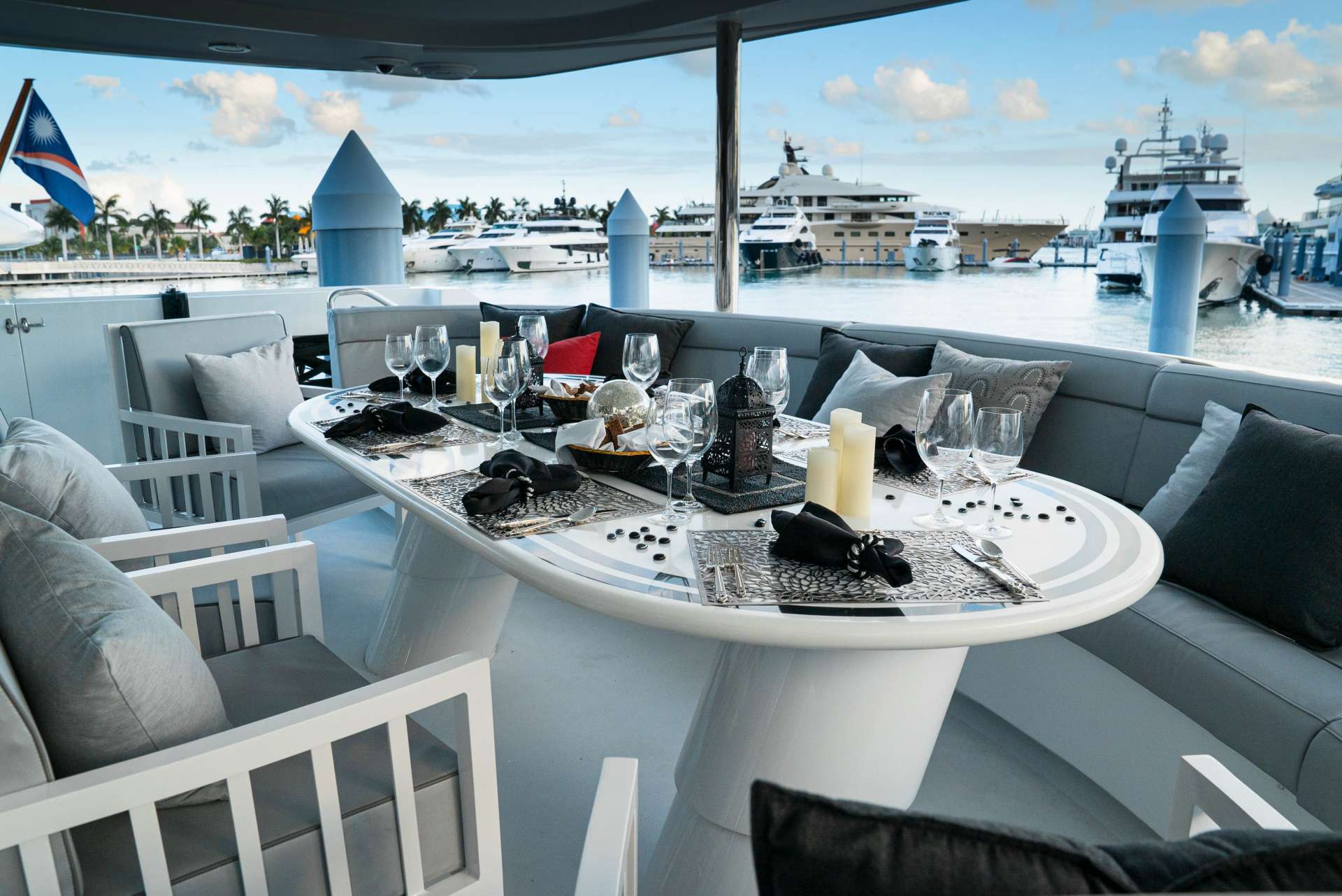 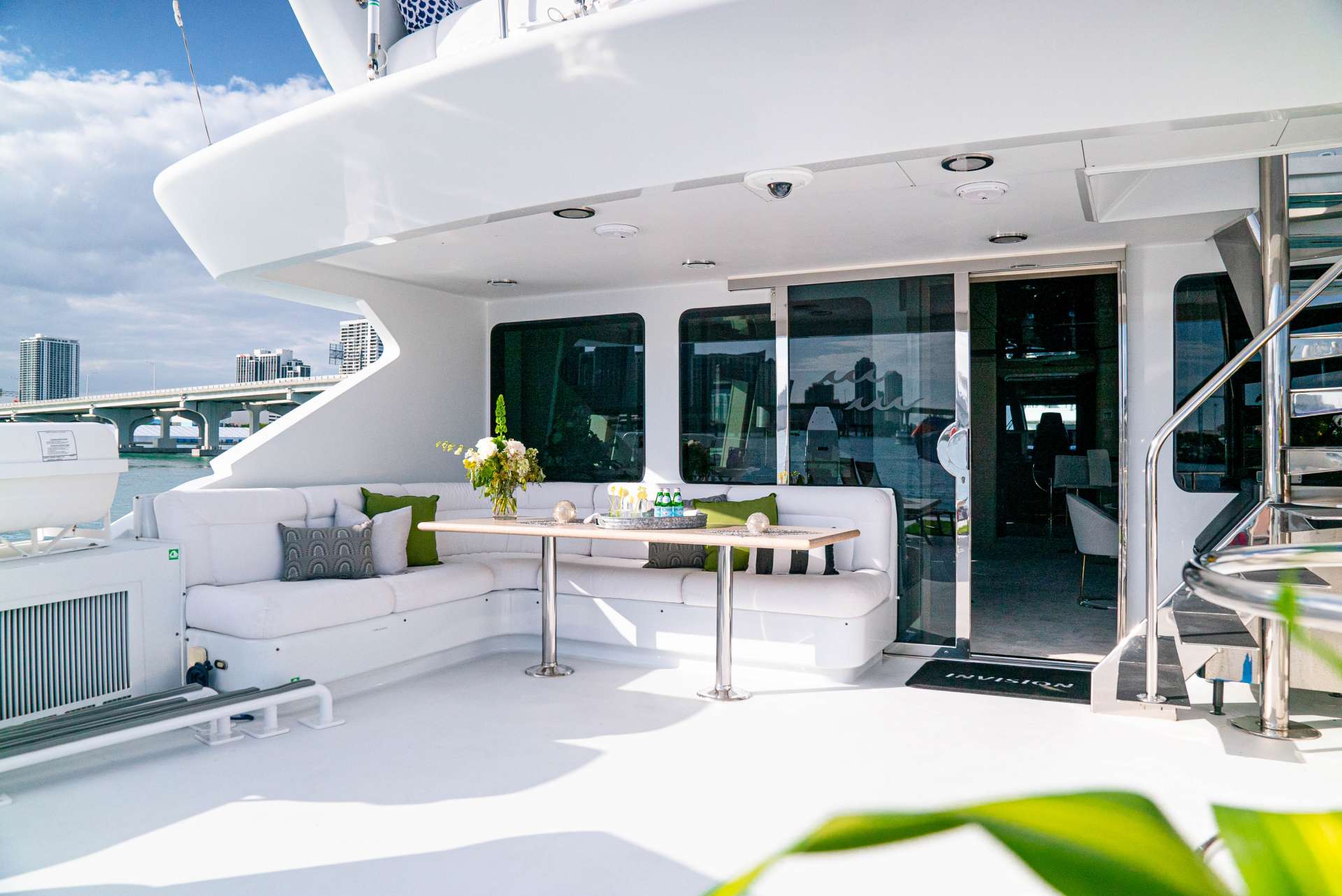 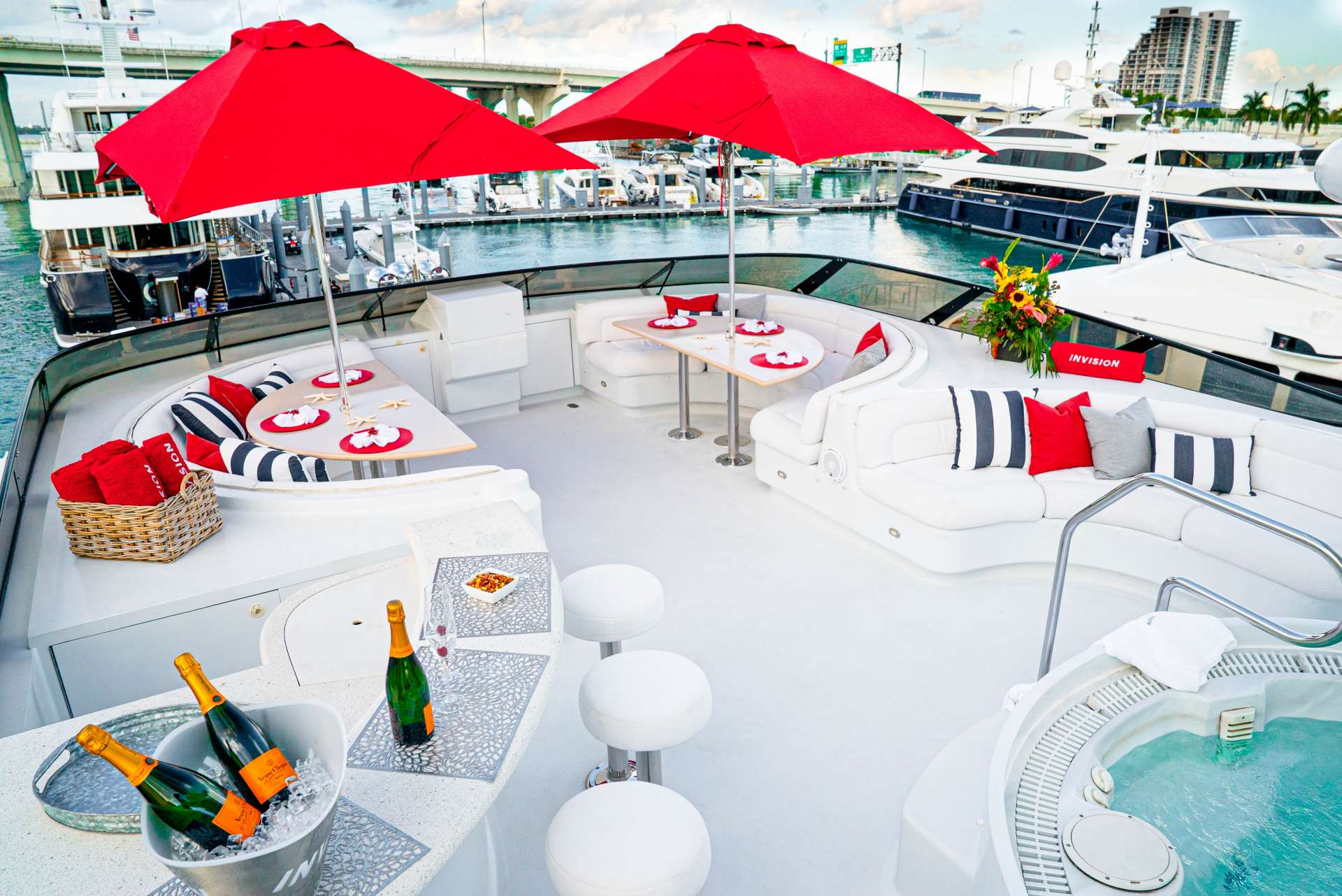 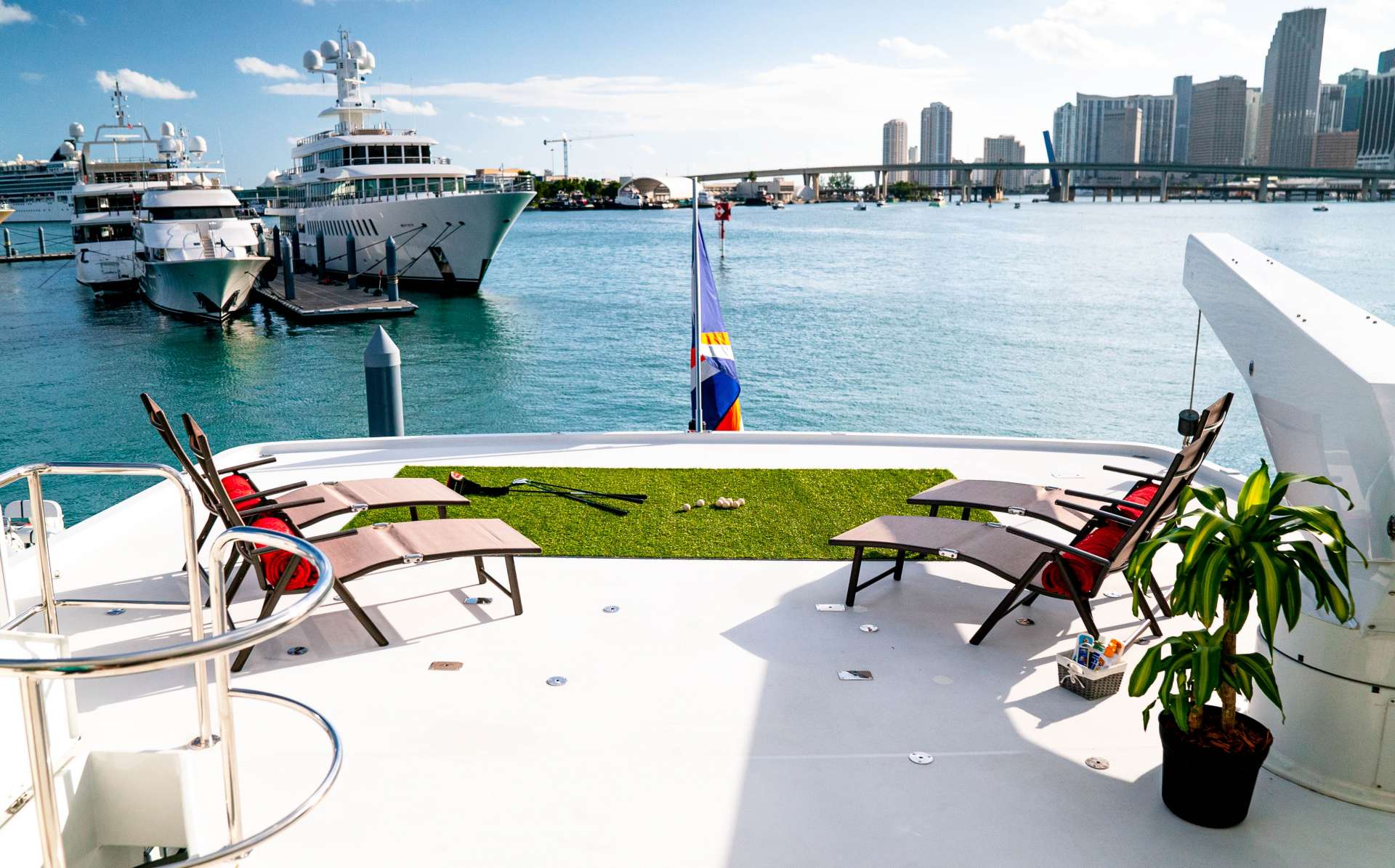 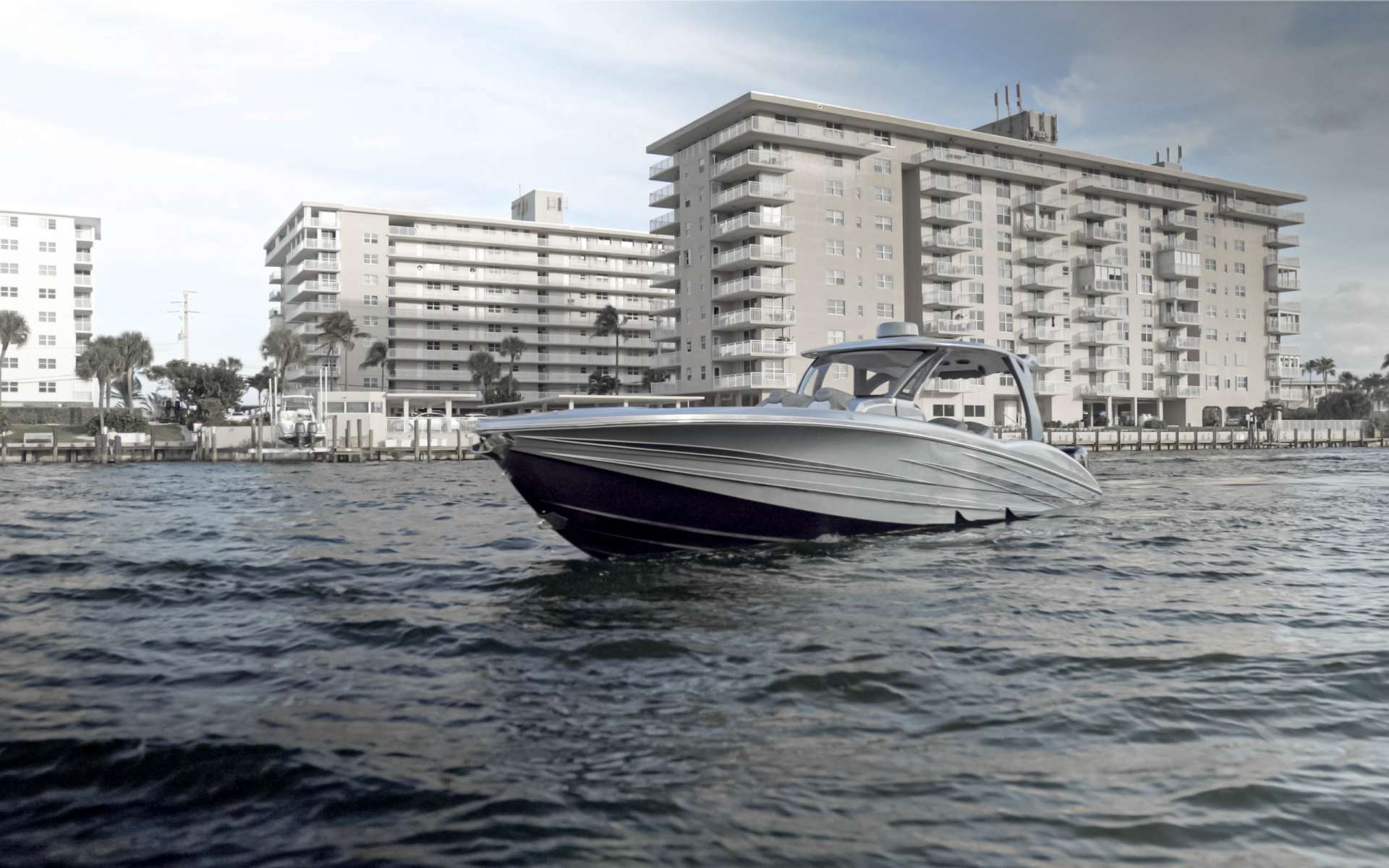 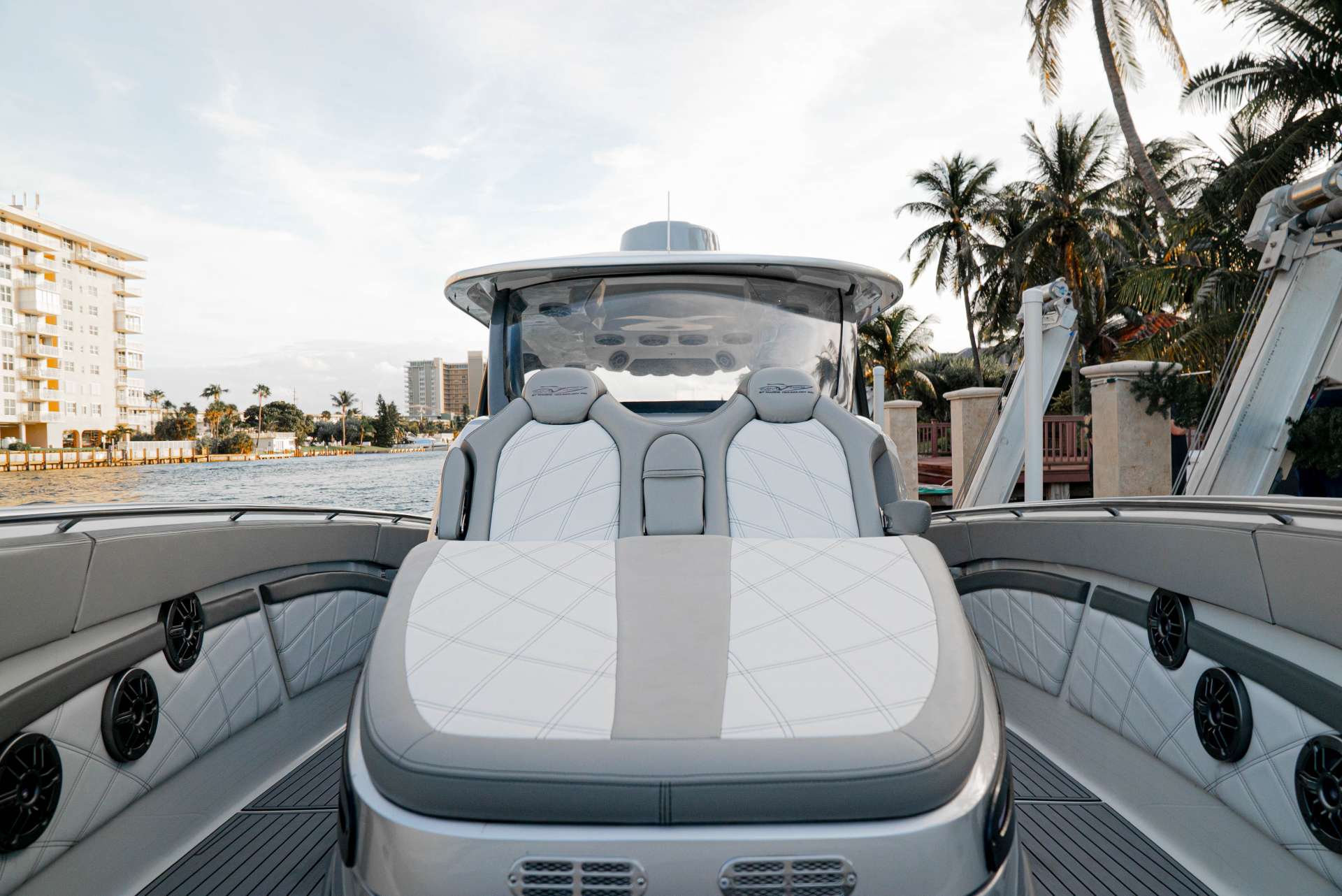 Accommodation for 10 guests in five cabins consisting of a full beam master suite on the main deck. Below deck are 3 Queen staterooms and 1 Twin. All cabins have recently upgraded satellite TV, full TV/AV on demand Kaleidescape central movie and audio server and en suite facilities.

Captain – Robert Soper
U.S.
Robert “Bob” resides in Stuart, Florida. He began a career in yachting after attending the Chapman School of Seamanship at the age of nineteen after hearing a rumor that mermaids are real. He has diligently been accruing sea service on board motor yachts since April 2005. Bob is experienced on motor yachts ranging from 97’ to 256’ in length and have acquired his first master license back in March 2009.
Due in part to his chosen career, Bob has been very fortunate to travel extensively over the years, both on and off the job. Some of those cruising areas include the Caribbean Sea, the Bahamas, Central America, North America (California to Mexico), and the Florida keys, as far north as Labrador, the Mediterranean Sea, from Spain to Turkey, New Zealand and Malaysia via Vanuatu and Palau. In spite of all his travel, Bob has yet to find Atlantis. His deep love and respect for the open sea truly resonates with his passion for surfing and mermaids (surfing with mermaids is still Bob’s life goal).
Qualifications: USCG Master 3000 GT – USCG OOW Unlimited GT, GMDSS Operator, RYA Personal Watercraft Instructor, Semi-Professional Gelato Chef

Chef – Luke Elwin
New Zealand
According to Ancestry.com, Luke is 45% New Zealand, 10% Welsh and 10,000% Nordic Dragon. After working in various roles from Michelin starred restaurants to setting up new establishments from the ground up, Luke decided to head to the sea for a new challenge. Upon learning that sea water had sea salt, he spent the last seven years working all over the world on yachts , as well as a private chef ashore, collecting salt along the way. Luke’s style of food is influenced by his home planet of Truffelo, formerly known as Pluto. His cooking leans toward a lighter, fresher and more “inter-dimensional” taste. In his downtime, Luke can be found at a hot yoga studio, working on his golf swing, creating pottery, and he has over fifty dives under his belt (he actually claims to have found Atlantis). Luke considers himself an “eco-chef” with the ethos of “Save the earth; it’s the only planet with coffee and avocados”. Luke sees himself as a reincarnation of Sonic the Hedgehog, and has recently invented the world’s first multivitamin for hedgehogs (Multi-spike).

First Mate – Jean De Villiers
New Zealand
Jean is a South African transplant who currently resides in New Zealand, the only country where sheep outnumber people 10 to 1, to which this is the reason Jean has become so passionate about “breaking from the mold”. Jean joined the yachting industry nine years ago upon hearing about the flat earth theory. Soon after his discovery, Jean had to find out more for himself
(results still not in). In his downtime, Jean enjoys drumming, guitar, martial arts and was trained by Bruce Lee (although not the one you’re thinking of).
Jean has sailed around the Cape of Good Hope, Robben Island, and has successfully navigated the Bermuda Triangle in a boat bound by flex tape (as seen on tv). As the 1st mate onboard, Jean has a passion in helping to create unforgettable experiences for all of his guests, even if it means him wearing a sheep costume.

Chief Stewardess – Marie-Helene Cloutier
Canada
Marie Helene Cloutier (formerly “The Unicorn Queen”) was born in Alma, a small French-Canadian town north of Quebec City, ironically where unicorns were first sighted back in 1500 BC.
From a young age, she wanted to study abroad and explore the world, but couldn’t figure out if she wanted to go back to being a unicorn or stay human. She realized it’s perhaps best that she stay in her current form of being the world’s shortest giant. She learned English and graduated from Business School, and she can speak intermediate Elf.
Having never flown in a plane, Marie-Helene was hired for six years as a flight attendant for Air Canada. She is a free spirit at heart, trading the skies for the seas. Since then, her yachting career has been a memorable chapter of her life, and still thinks she will retire a unicorn. Some of her hobbies include scuba diving, one legged rollerblading, reading in foreign languages and assuming her own story, and was once voted “most likely to appear on a reality tv show”.

Stewardess – Jody Bloemhof
South Africa
Jody (also known as Ocean Eyes), was born in sunny South Africa, where she was gifted a faulty compass, and decided to take it to the seas to try and correct it. We might replace it one day. Ocean Eyes has been in the hotel/tourism industry for four years, and in three of those years, she was also a part-time Skittles organizer, allowing her to develop an incredible attention to detail. Working onboard yachts gave her the perfect opportunity to combine her love for the ocean, hospitality experience and Skittle skills. In her spare time, she enjoys hiking, surfing and exploring the road less traveled, but never without her bottle of green Tabasco sauce. Jody will always go above and beyond to ensure guests have excellent service with a smile. Jody’s motto of “Your satisfaction is my top priority, so if you could do your best to act satisfied, then it would be greatly helpful” to ensuring satisfaction for all of her guests onboard.

Deckhand – Stuart Van Kuyeren
South Africa
Born in South Africa, Stuart had always dreamed of living in a world where dolphins and humans live and work together in harmony. So after completing his bachelor’s degree in marketing management and becoming a dolphin sonar technician, he decided to try his hand in the yachting industry. He traveled to many different cultures around the world (including, but not limited to Delphinus). After three years in the industry, Stuart still enjoys aspects of the job that combines his skills of speaking Klingon and his ability to play the harmonica with his left nose.
In his free time, Stuart enjoys free diving, spearfishing, coffee, weight training, exercising and anything that has to do with Bass Pro Shop (Disney a close second). After having eaten a 40oz burger, he now considers himself a semi-professional eater. Feel free to challenge him any time!Stuart’s life motto is “I love roller coasters, but the pirate ship ride completely terrifies me”.

Engineer – Sern Lagerwall
Sern or (Sirenapoplopolus for short) was born in South Africa. He had a colorful life before joining the industry eight years ago, which included being a cocktail flair-tender, a professional musician, a drone builder and a pilot. Furthermore, he was even voted Cosmo’s Top Ten sexiest bartenders in South Africa (true).
Sern developed an interest in engineering because he heard that he would eventually be able to figure out how to fix the cheese problem on the moon, and is proud to report he has made great progress (although he admits to giving most of the credit to Elon Musk). In his own time however, he can be found on the local golf course, playing the guitar, flexing his jujitsu and he loves to sing, having mastered the silent opera. Sern considers Harry Potter to be a documentary, and looks forward to learning the science behind Quidditch, in hopes of bringing it to a larger audience.