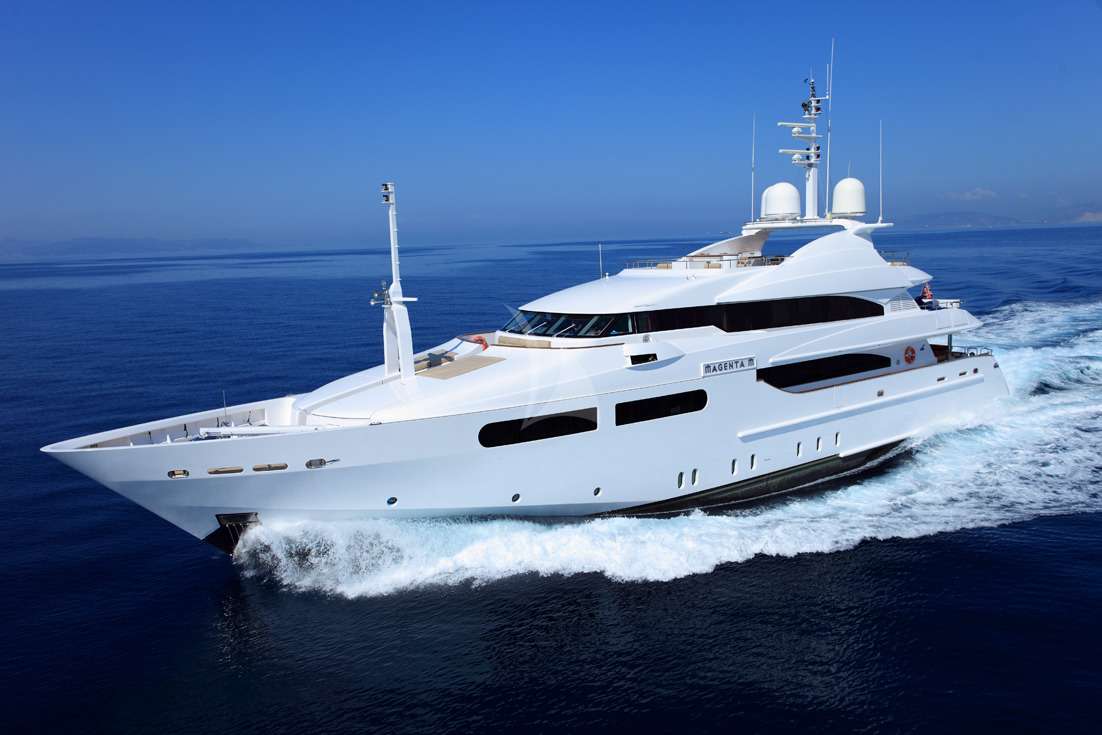 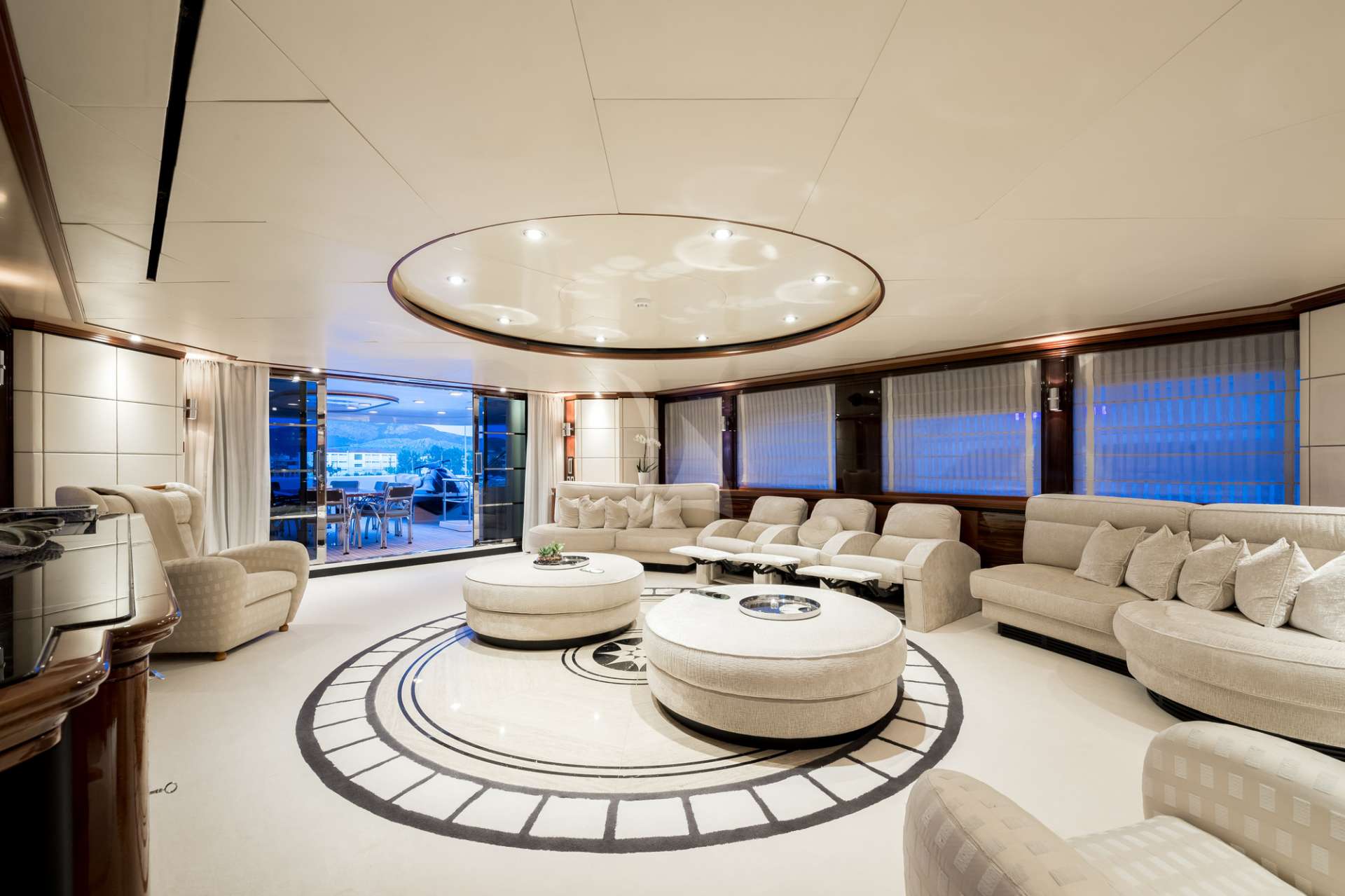 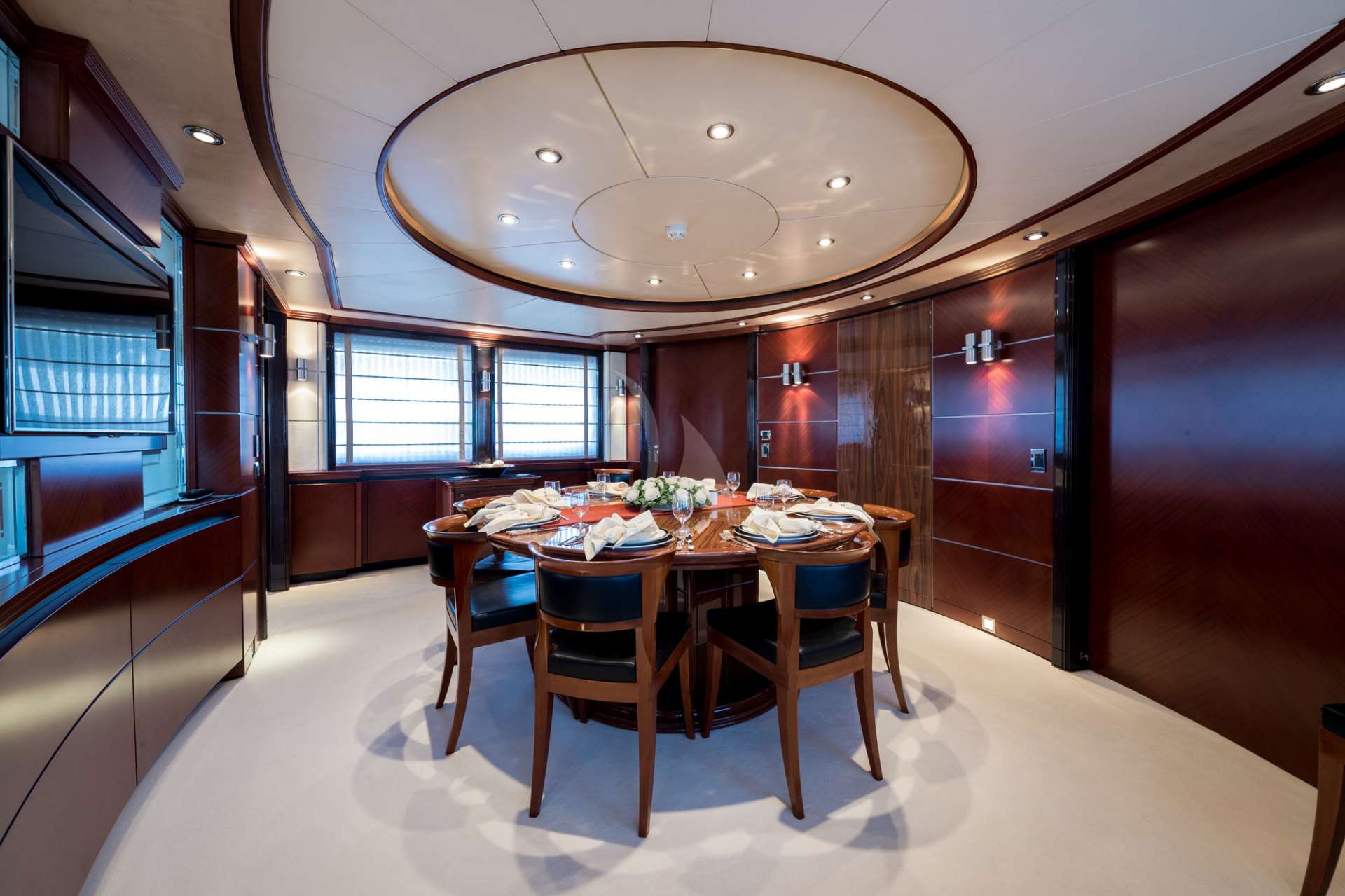 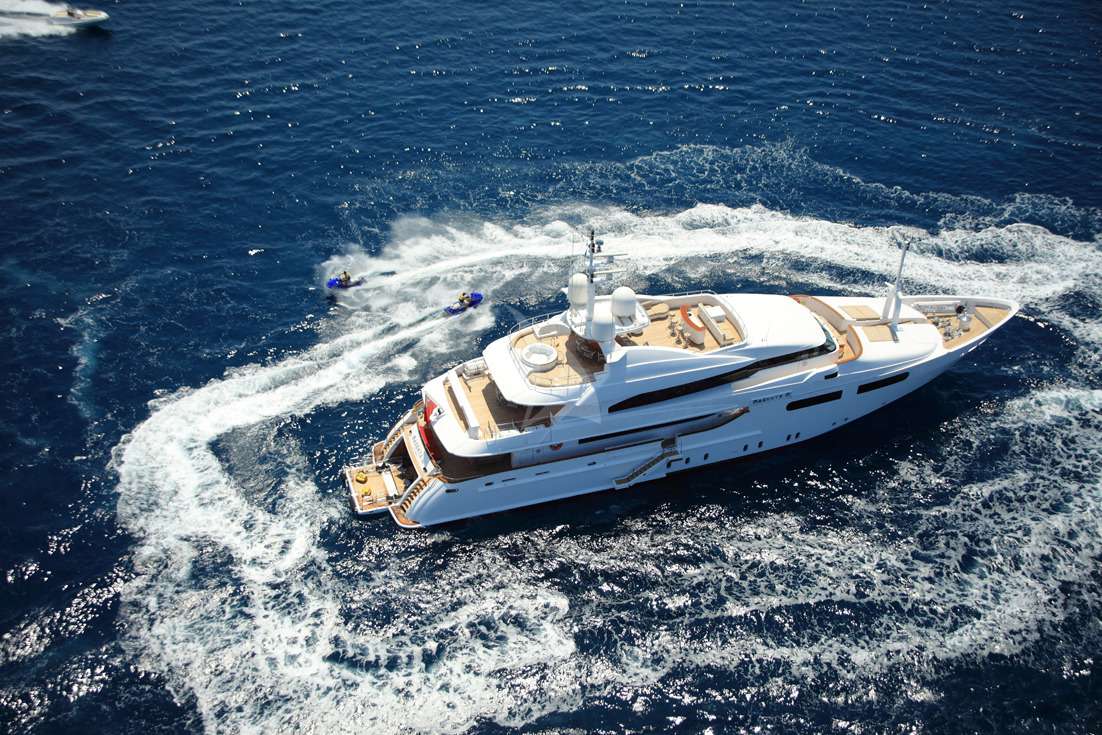 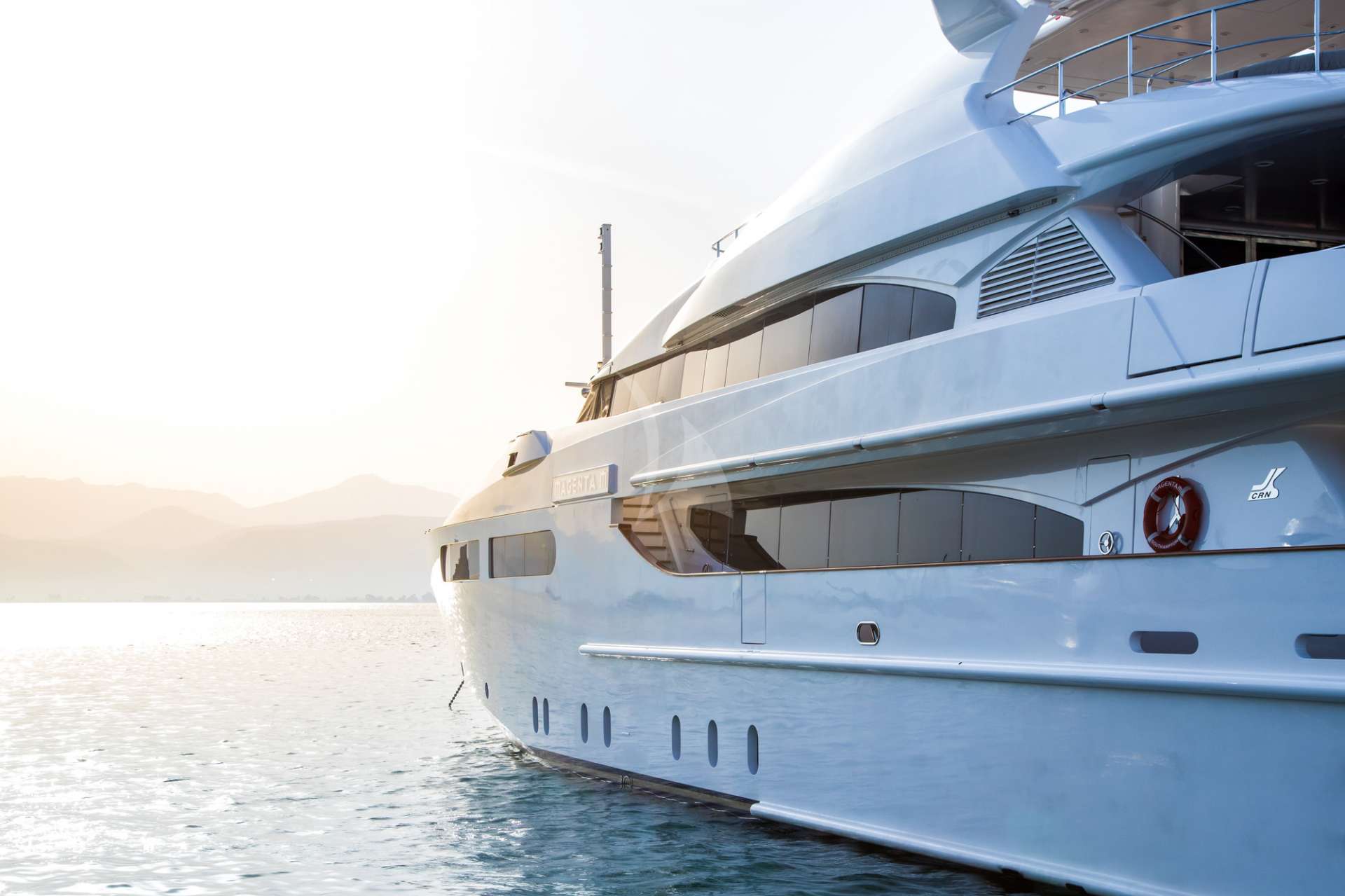 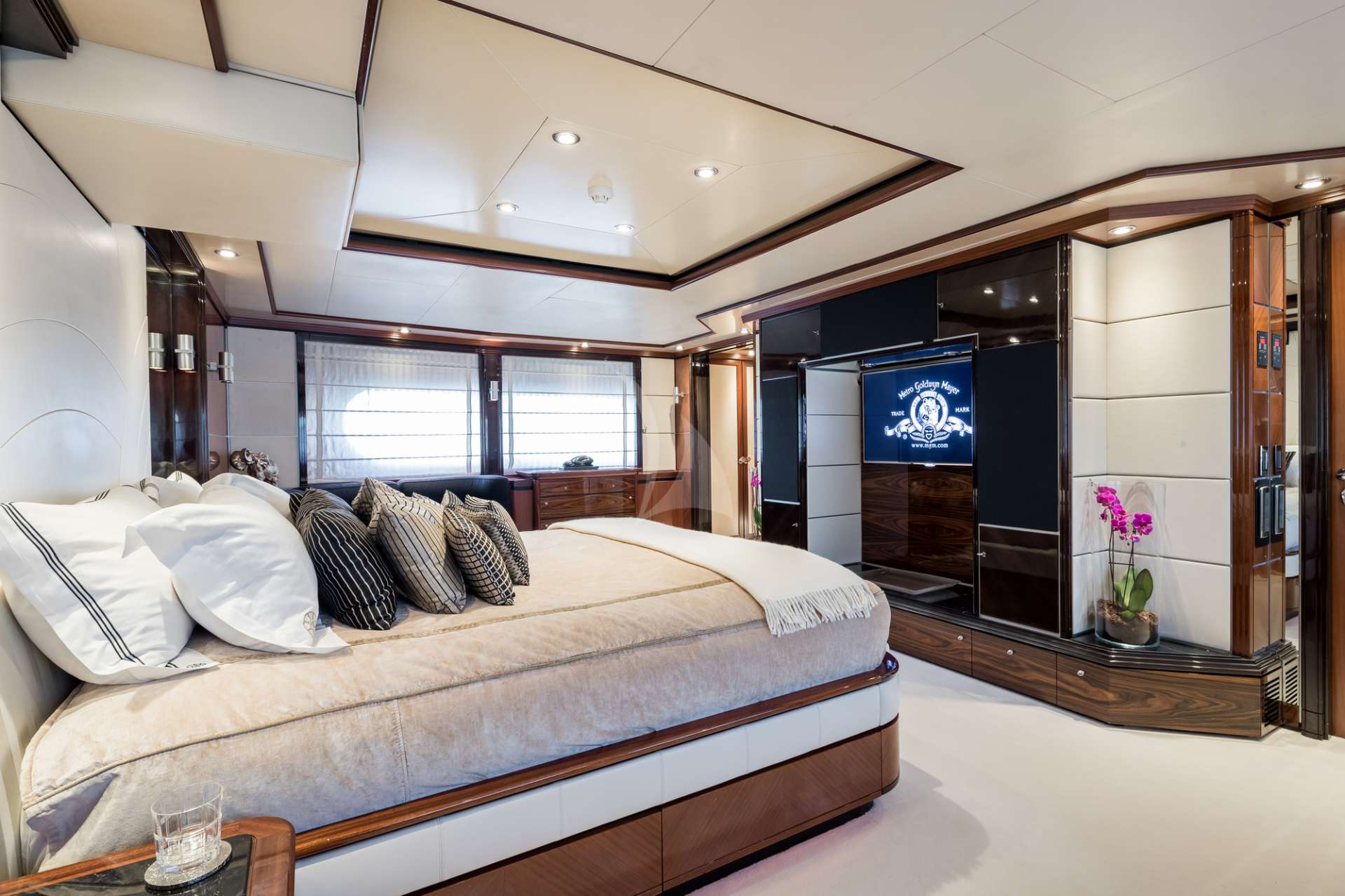 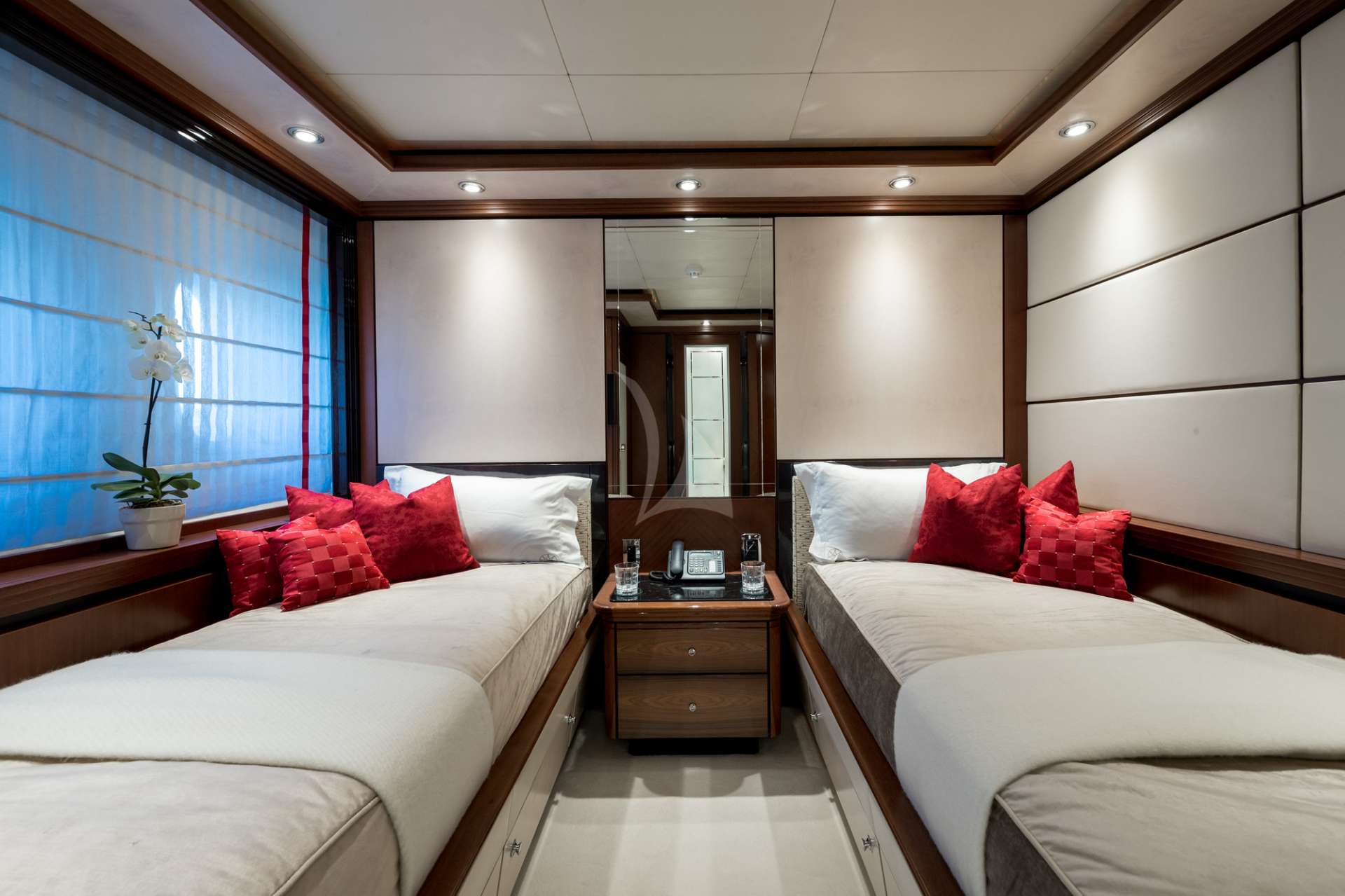 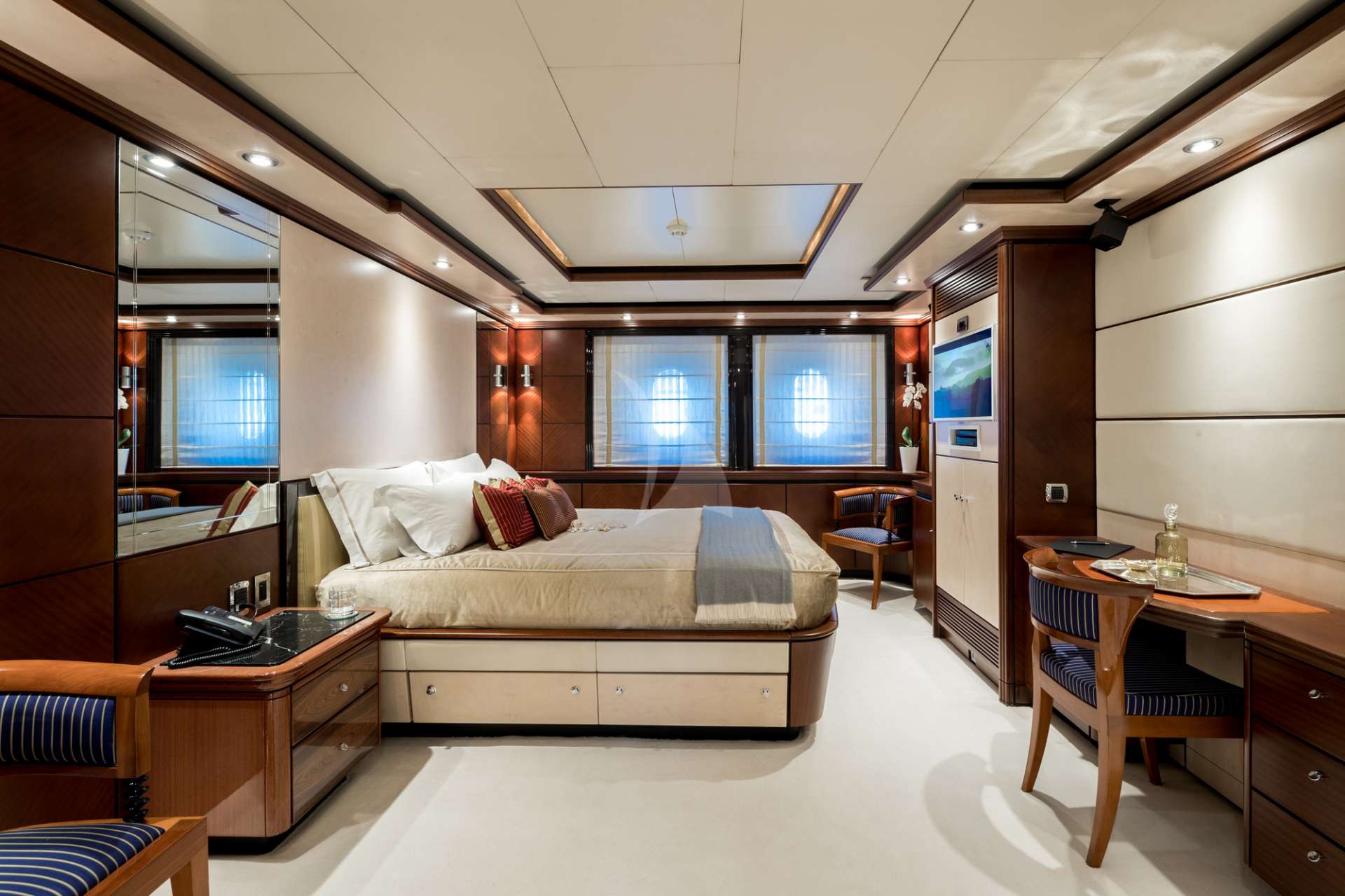 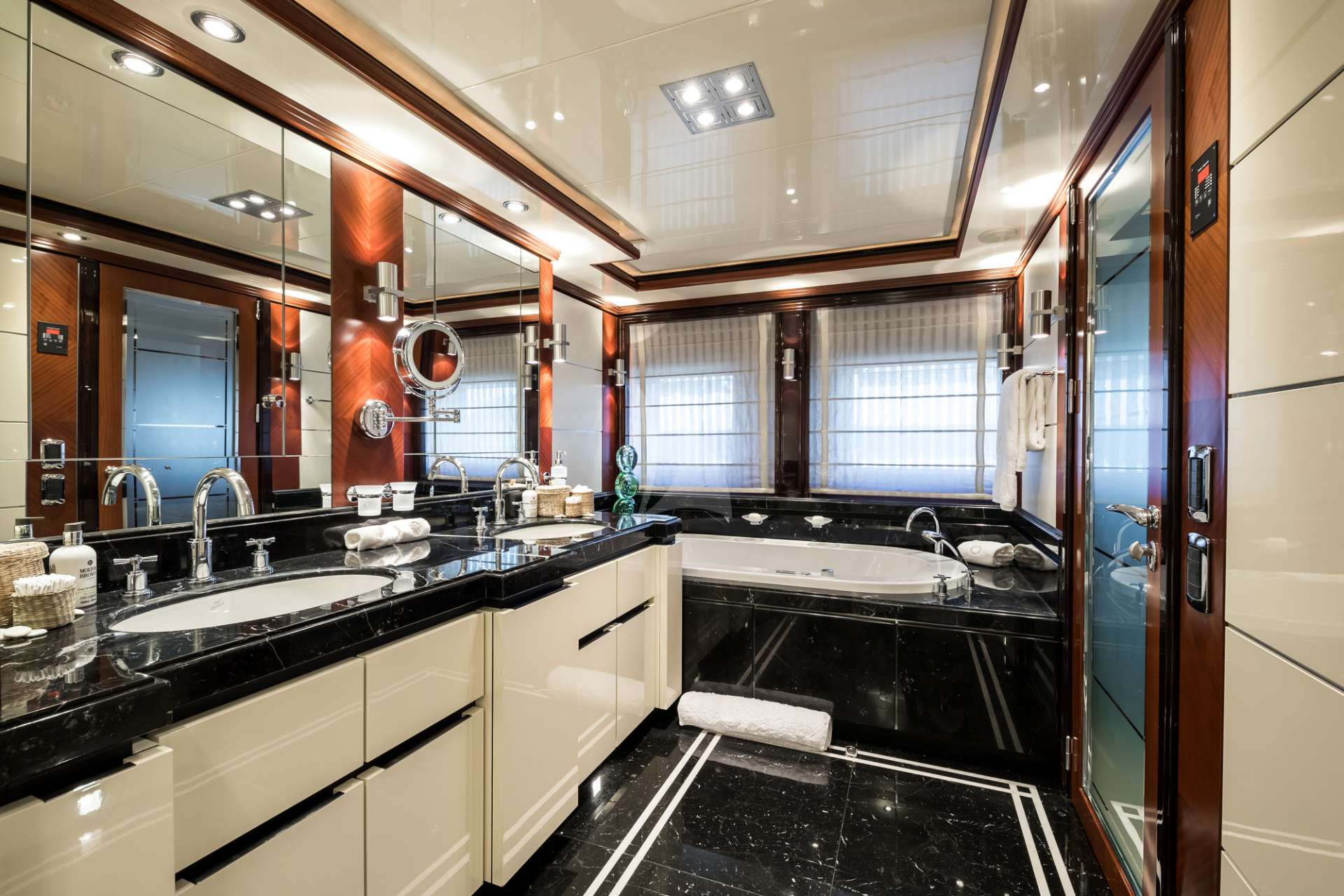 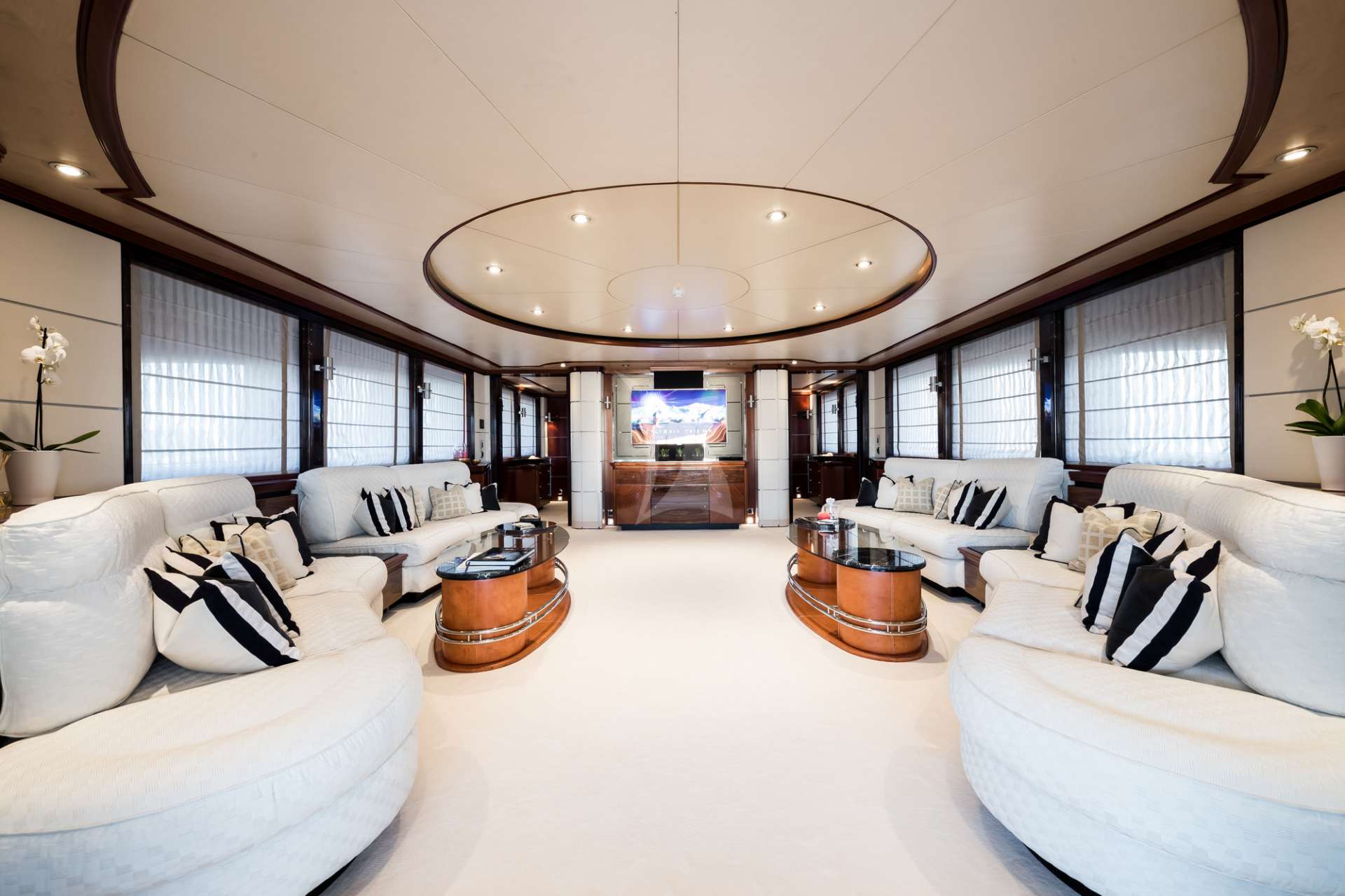 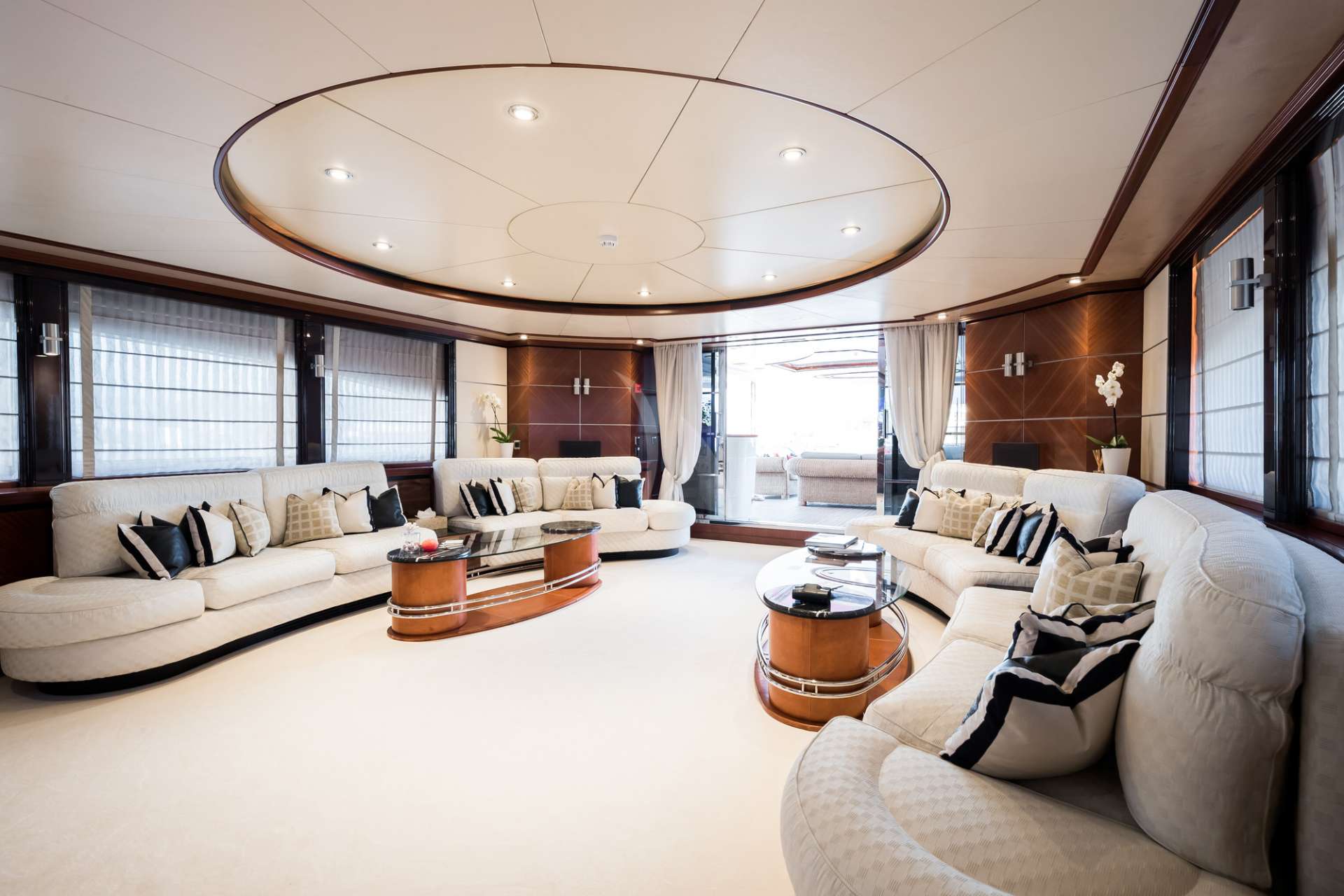 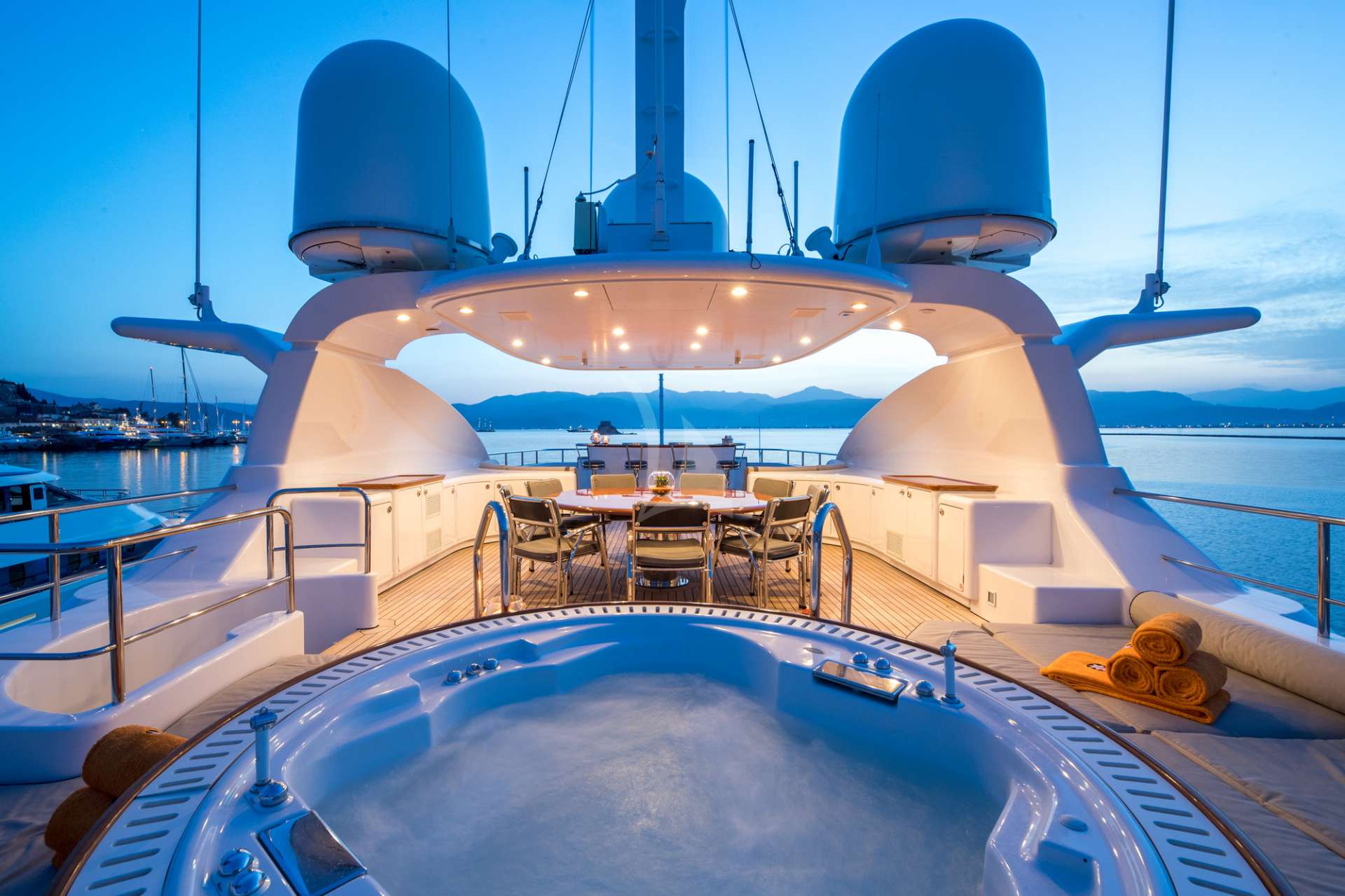 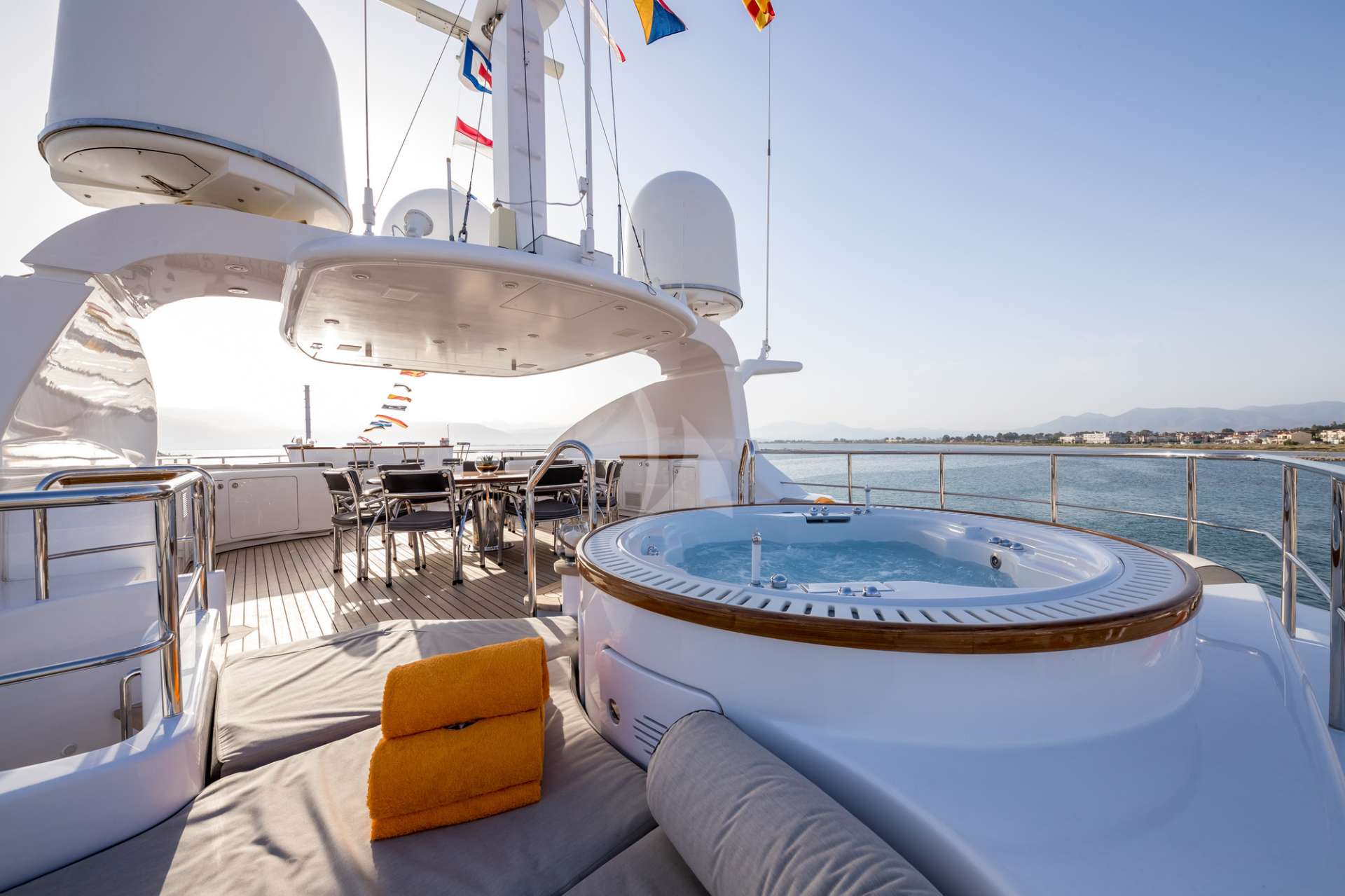 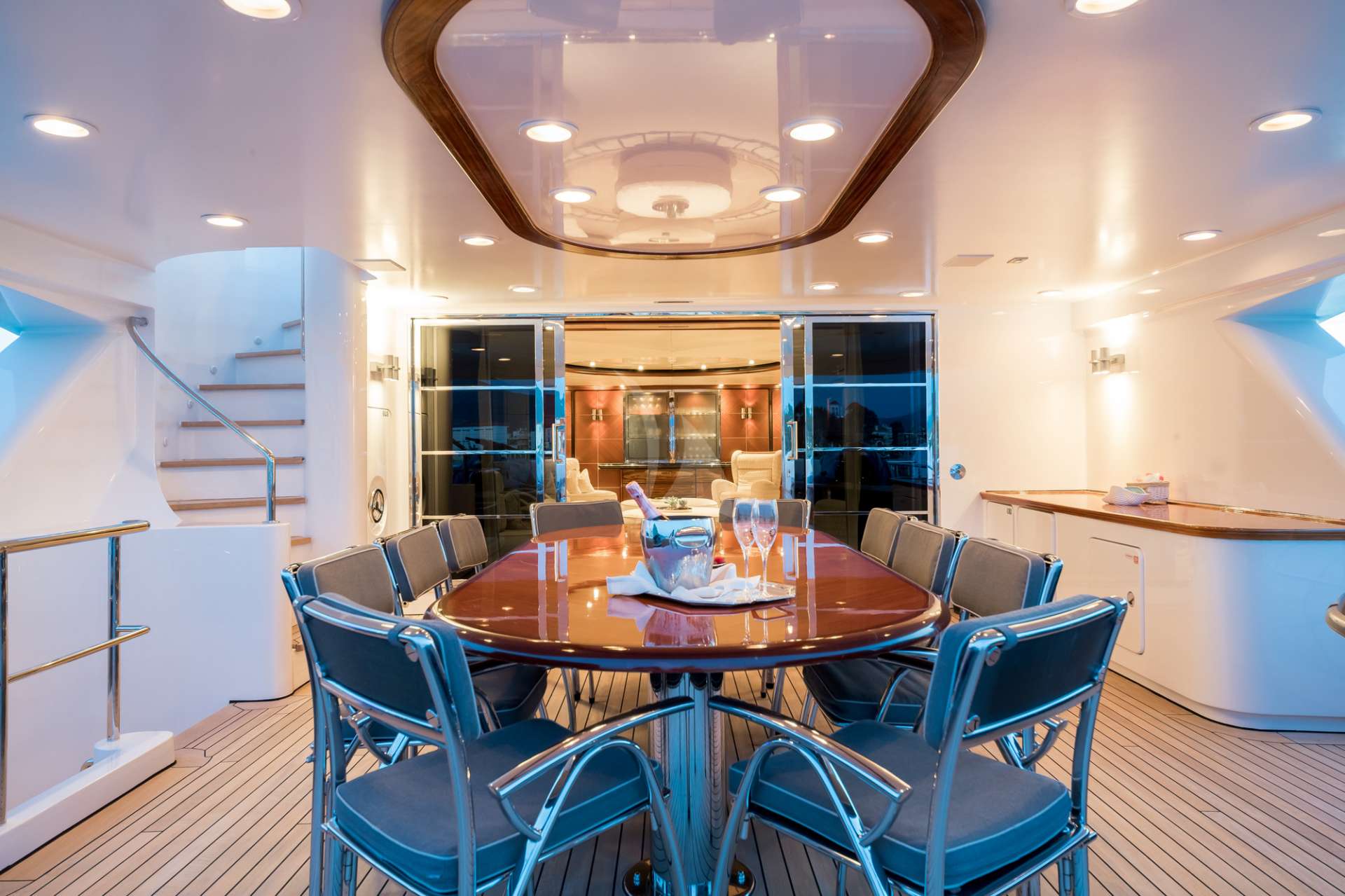 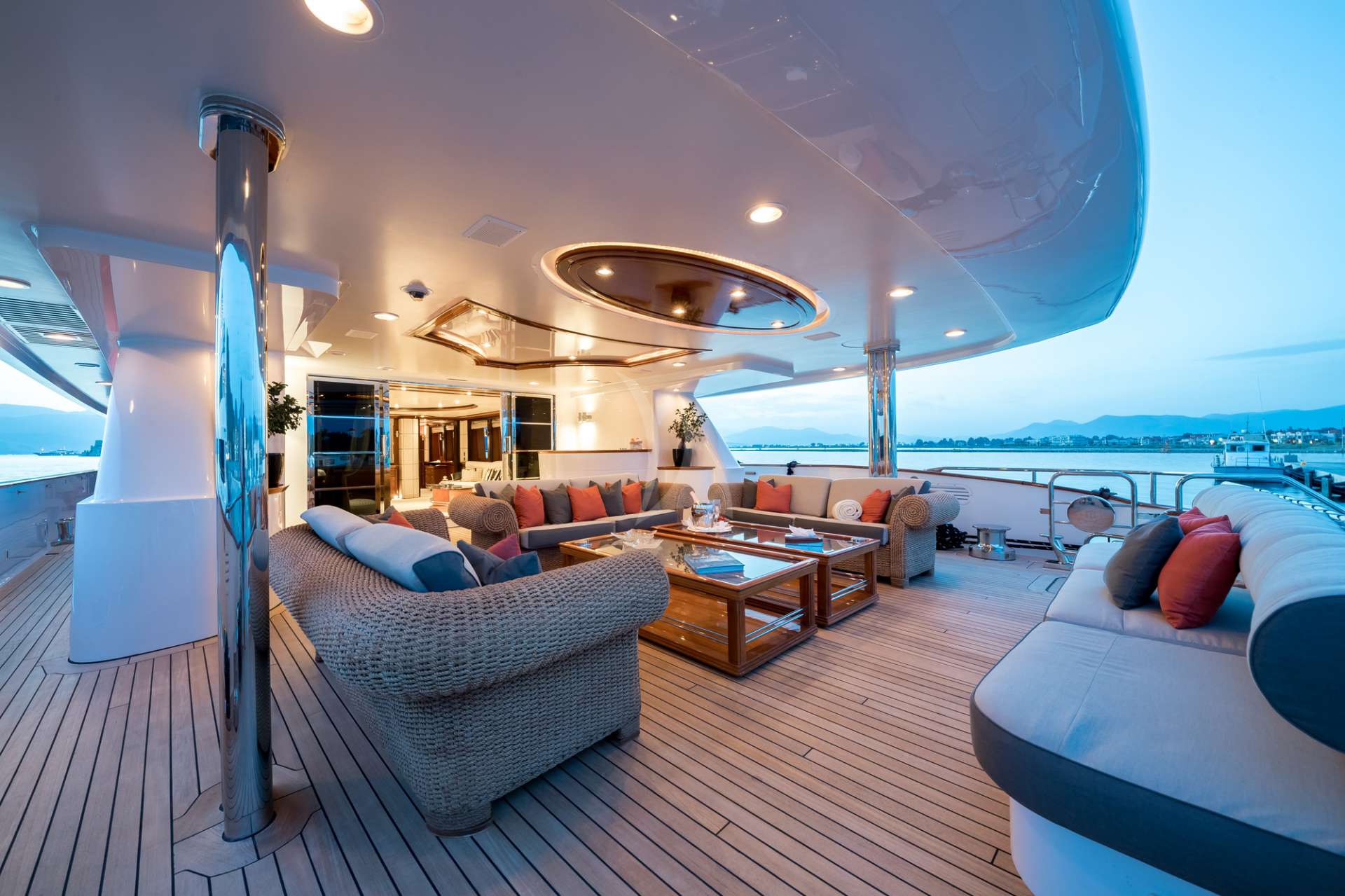 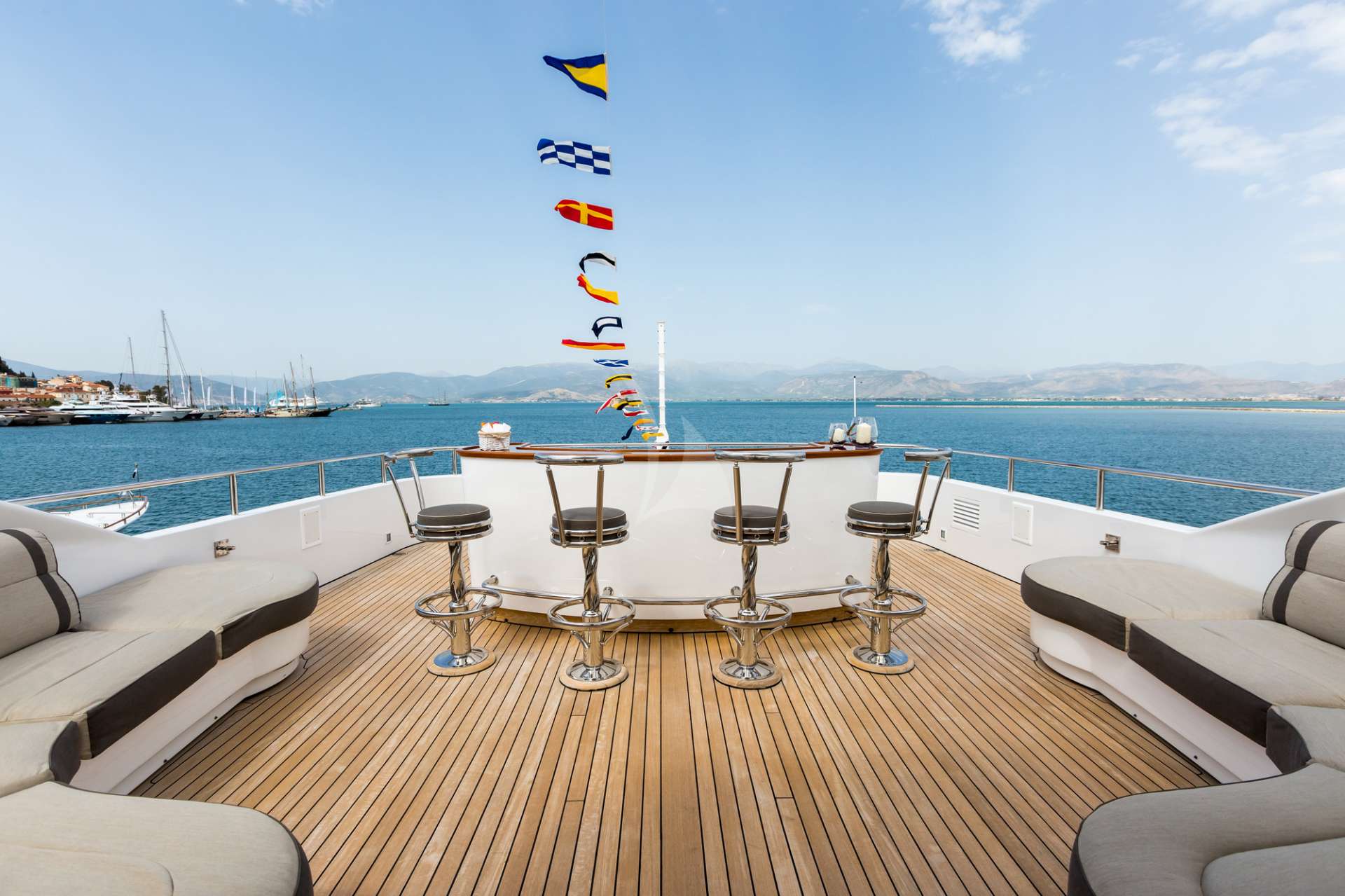 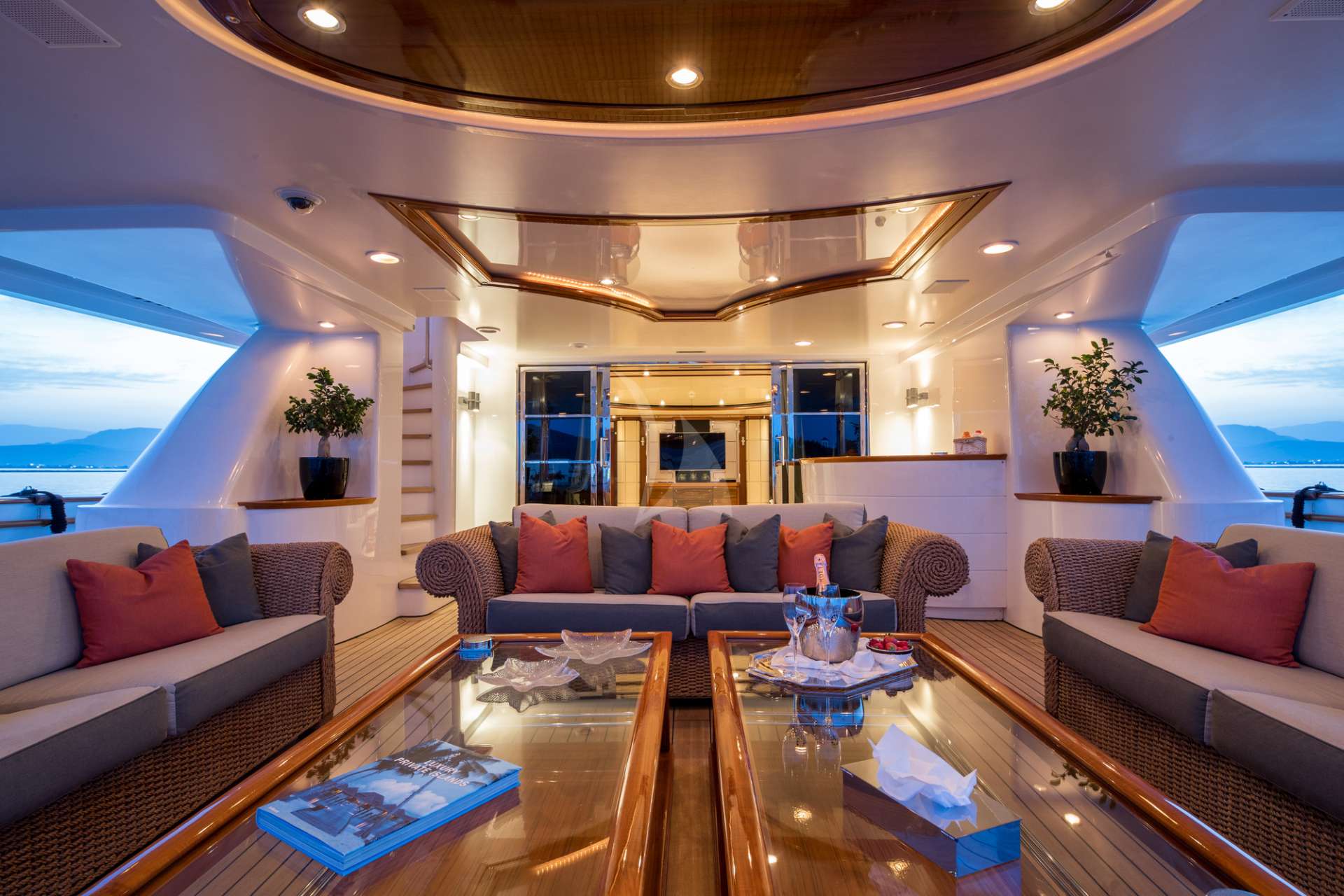 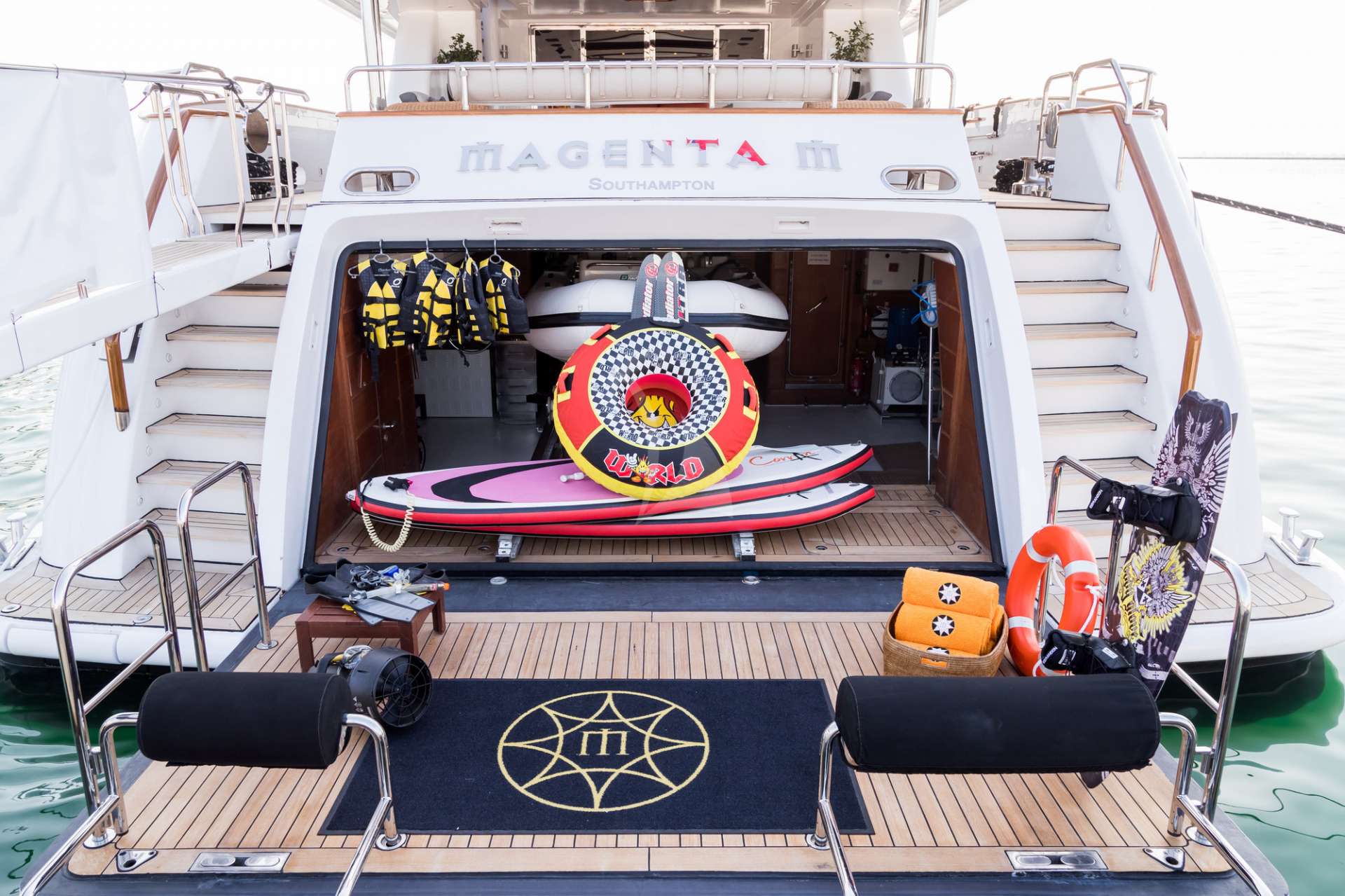 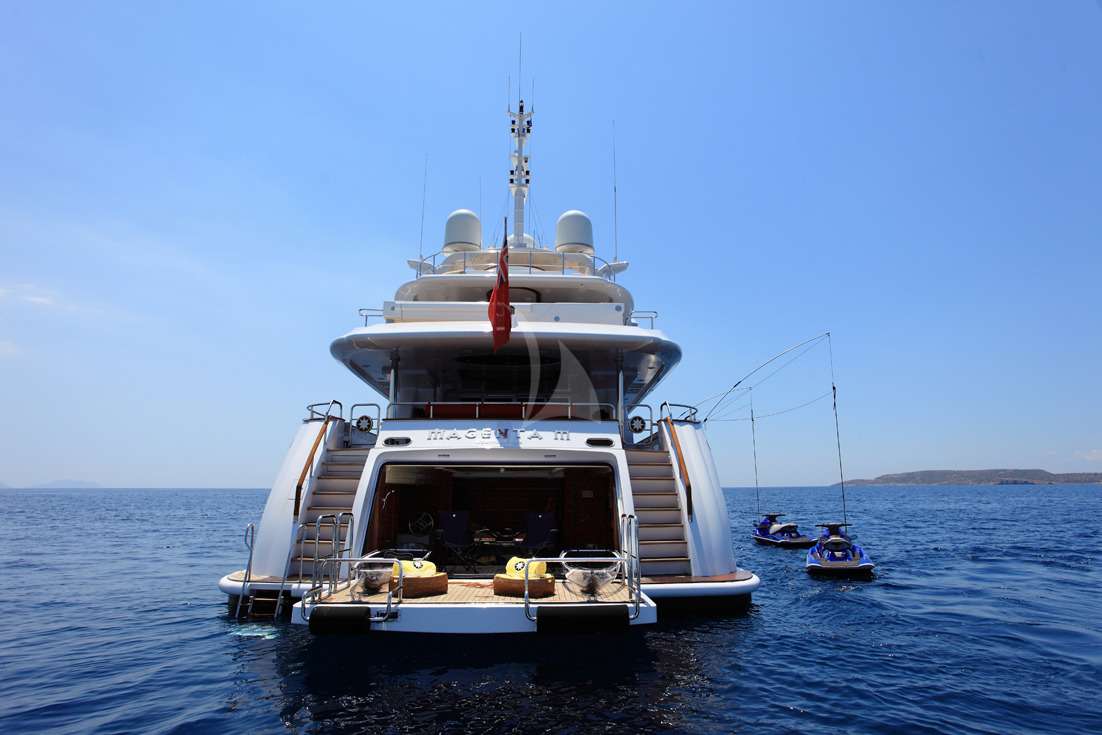 Other Entertainment: Playstation 3 in all cabins
Wii
Roulette table

CAPTAIN: Hess PEPLER
Nationality: South African
Spoken languages: English and Afrikaans fluent; French intermediate; Italian basic
Previous positions as Captain: M/Y iRock (35m), M/Y Fiorente (37m), M/Y Robusto (42m), M/Y Supertoy (28m) M/Y Carrara (27m)
With 20 years of experience in the yachting industry, Captain Hess has gained a solid foundation of knowledge and practices. Beginning his career in 1999, Hess worked on board a 28m motor yachts for 5 years, working his way up from deckhand before earning his Captains qualification and going on to captain both private and charter yachts for over 13 years. Accustomed to long and busy charter seasons, Hess has a strong teamwork ethic and is an excellent manager of his crew – ensuring positivity alongside hard work. Throughout his career, Hess has overseen major refits and surveys as well as regular maintenance of the yachts.
Captain Hess enjoys the opportunity to try local cuisines and explore new places when he is not working.

CHEF: Douglas ADAMS
Nationality: British
Spoken languages: English fluent; French basic
With nearly 20 years of experience in the culinary industry, Chef Douglas has amassed a wealth of knowledge and skills, from preparation and cooking of finest ingredients, running successful kitchens to managing budgets and large teams. Cooking has always been a passion for Douglas and he began his training early on at the Zevenwatch French Chef Culinary School where he graduated and spent 3 years in further training in the 5 star Relais & Chateaux Marataba Safari Company in South Africa. When he started his career in 2001 he fell immediately in love with the industry. Douglas’s experience vast, having worked in numerous gourmet restaurants, 5 star hotels as well as cooking for royalty. Douglas strives to use the freshest and highest quality ingredients where he can showcase every flavour to it’s fullest.
Chef Douglas always grows his own organic vegetables at home.
He enjoys the opportunity to BBQ with his family and friends, exploring new destinations and experience local food cultures and flavours. He can be found also running or doing watersports.

CHIEF STEWARDESS: Nicole ZMIEWSKI
Nationality: German
Spoken languages: German & English fluent.
Nicole has a real passion for the sea, which combined with her previous experience as a personal assistant makes her an excellent chief stewardess. Having worked on several yachts up to 55m she is no stranger to high demands and loves to pamper the guests and ensure that their needs are met at all times. With a friendly and jovial nature, Nicole is a bounding element. Both guests and crew enjoy her pleasant demeanour, which brings a serene feeling on board Magenta M.
In her free time, Nicole loves reading book and exploring new places with her Fiancé, captain Hess.

BOSUN: Bernard SURACE
Nationality: French
Spoken languages: French native; English, Italian and Spanish
Bernard joined the industry as First Mate on board 41m Nourah of Riyadh where he stayed for 12 years. His love of the sea has seen him continue his yachting career on yachts ranging between 30 – 50m. Bernards’ extensive hands-on experience both practical and technical and his dedicated work ethic make him a great addition to the Magenta M crew.
Outside of yachting, Bernard will be found diving or on his motorbike.

CHIEF ENGINEER: Denis VALCIC
Nationality: Croatian
Spoken languages: Croatian and English fluent; Italian intermediate
Denis’s career in yachting began in the Merchant Navy where he honed his skills and further deepened his love of the oceans. He joined the luxury yachting industry in 2013 and has since worked on board motor yachts ranging from 37 metres to 50 metres. With a methodical way of working, nothing is too much trouble for Denis – he thrives on the ability to fix anything and if it can’t be fixed then hand him a manual and he’ll show you how.
To relax and unwind, Denis enjoys fishing.

2nd STEWARDESS: Helena VALING
Nationality: Estonian
Spoken languages: English, Estonian & Finnish fluent.
Helena’s love of travelling naturally drew her towards the yachting industry where she began working on board a 36m sailing yacht. It was evident to her from the beginning that a career in yachting was her calling. As a qualified beautician, Helena understands the importance of making guests feel relaxed and well-cared for and she uses this in every aspect of her job whether in cleaning, service or simply ensuring the children are thoroughly enjoying themselves.
Helena enjoys staying active and can be found participating in a variety of sports whenever she can.

3rd STEWARDESS: Anna JAKIMIEC
Nationality: Polish
Spoken languages: English and Polish fluent; French basic
Anna studied International Tourism, specialising in the luxury hotel and travel industry. After graduating, she moved to the French Alps where she worked in prestigious hotels and exclusive chalets for 5 years. She also worked in the USA with the Hilton Group. Her professionalism together with her exacting standards and discreet service gives her the ability to meet the demands of the yachting industry and a busy charter. Anna is very passionate about her work and she always makes sure that she delivers the highest level of service.
When Anna is not on board, she really enjoys travelling, being active with sports such as volleyball and snowboarding. She loves the yachting industry and to meet new people.

2nd ENGINEER & DECKHAND: Simon NAETS
Nationality: Belgian
Spoken languages: English and Dutch fluent; French intermediate
Previous positions as Engineer:
S/Y Oriel (38m) Engineer, MPFV Simon Steven 2nd Engineer, Merchant navy.
Simon is a highly skilled and competent engineer and deckhand. He graduated from the Antwerp Maritime Academy and spent 5 years in the Merchant Navy. He was also part of Jan de Nul Maritime Group for 5 years. Thanks to his strength, knowledge, experience and his young spirit, Simon is as confident ensuring machinery is running optimally as he is serving demanding guests and helping guests with watersports equipment.
When not on board, Simon is actively involved in sports, especially long-boarding.