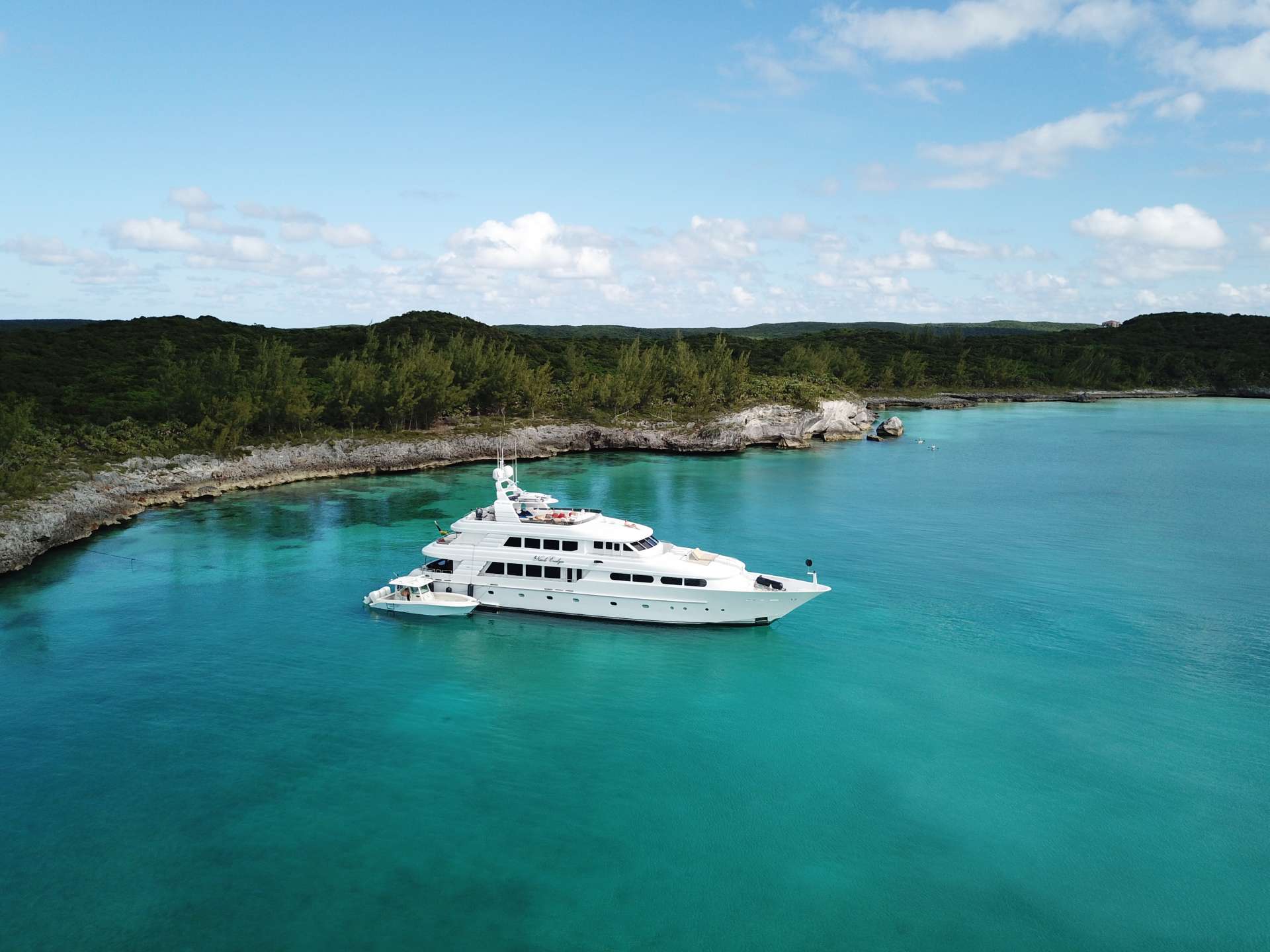 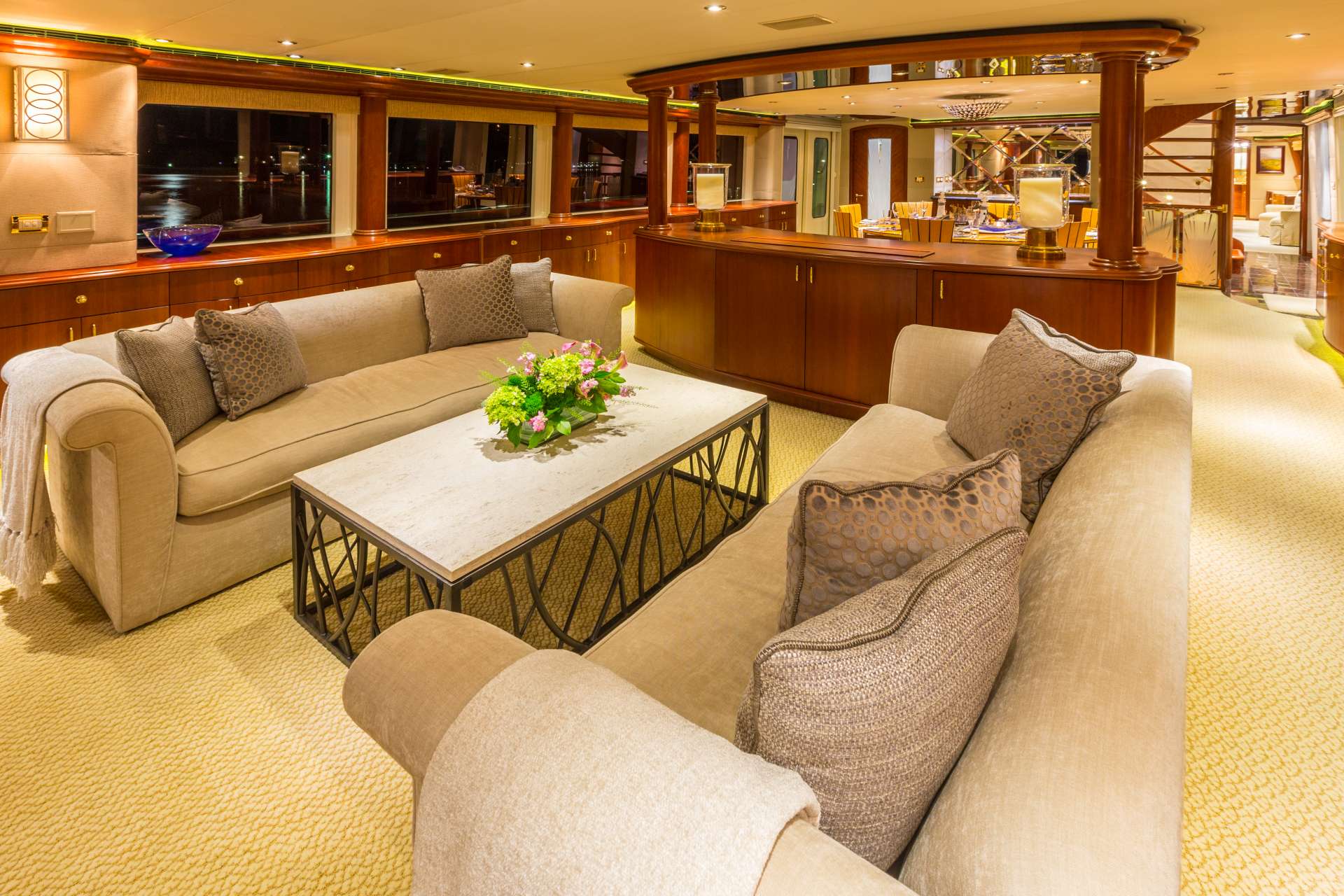 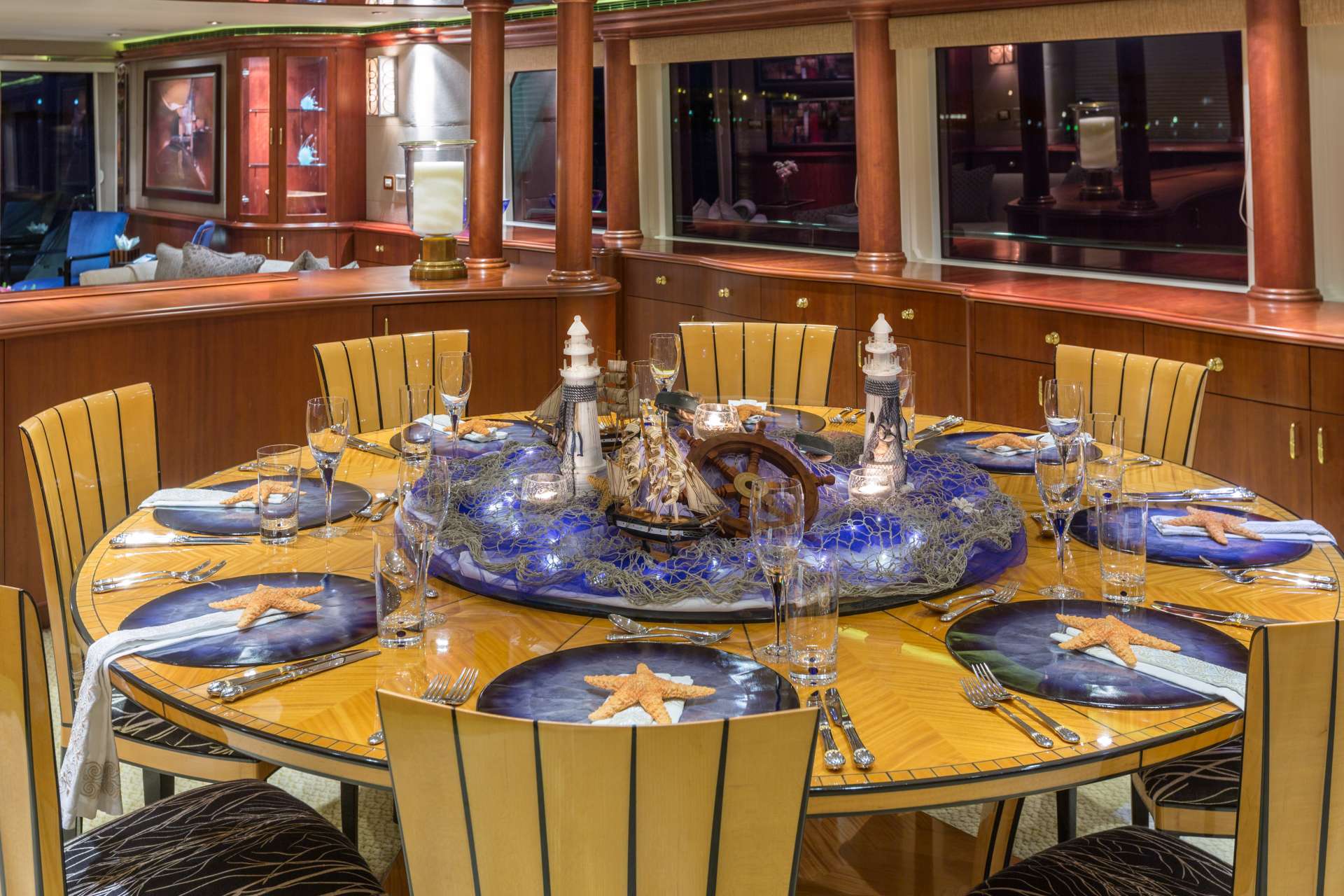 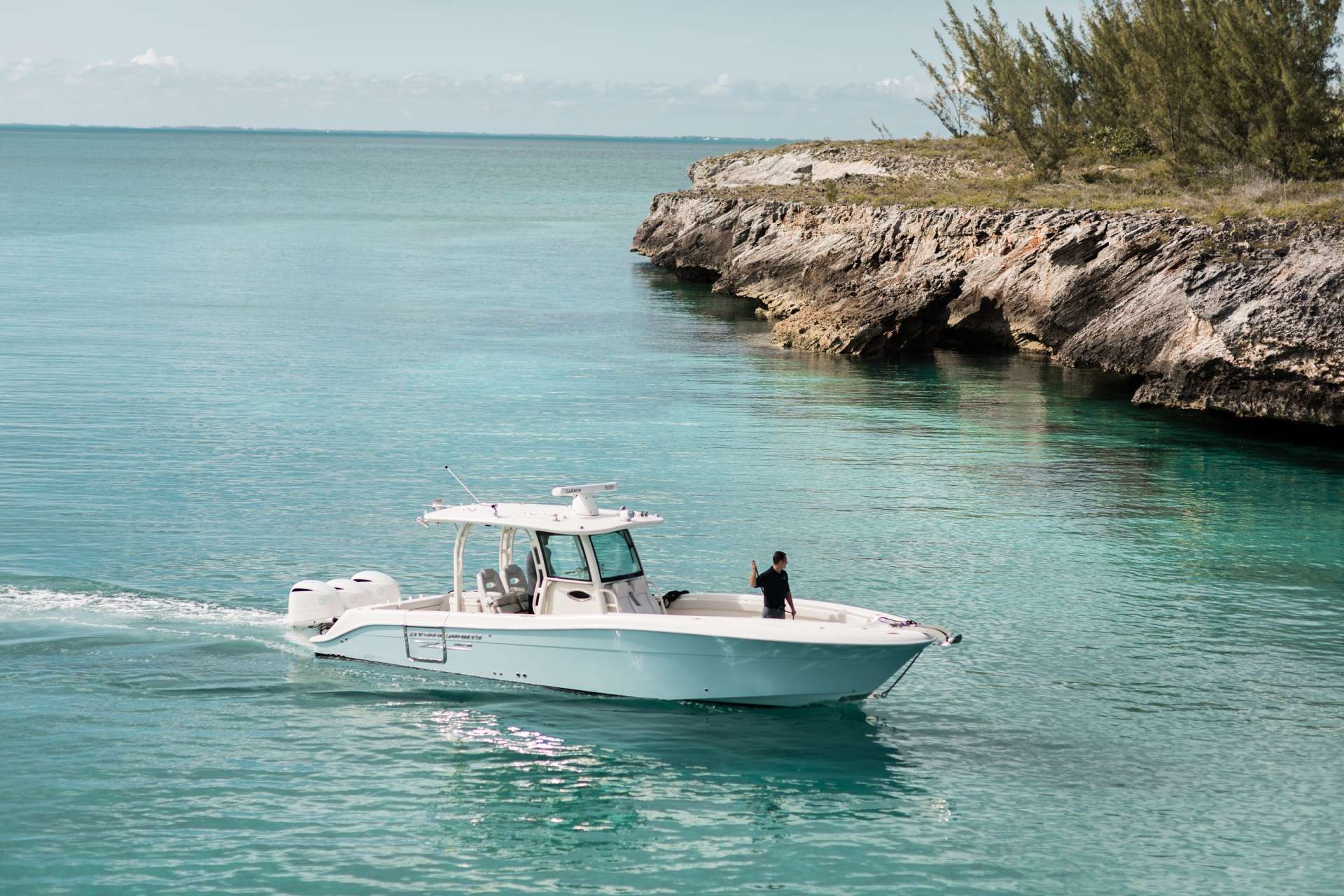 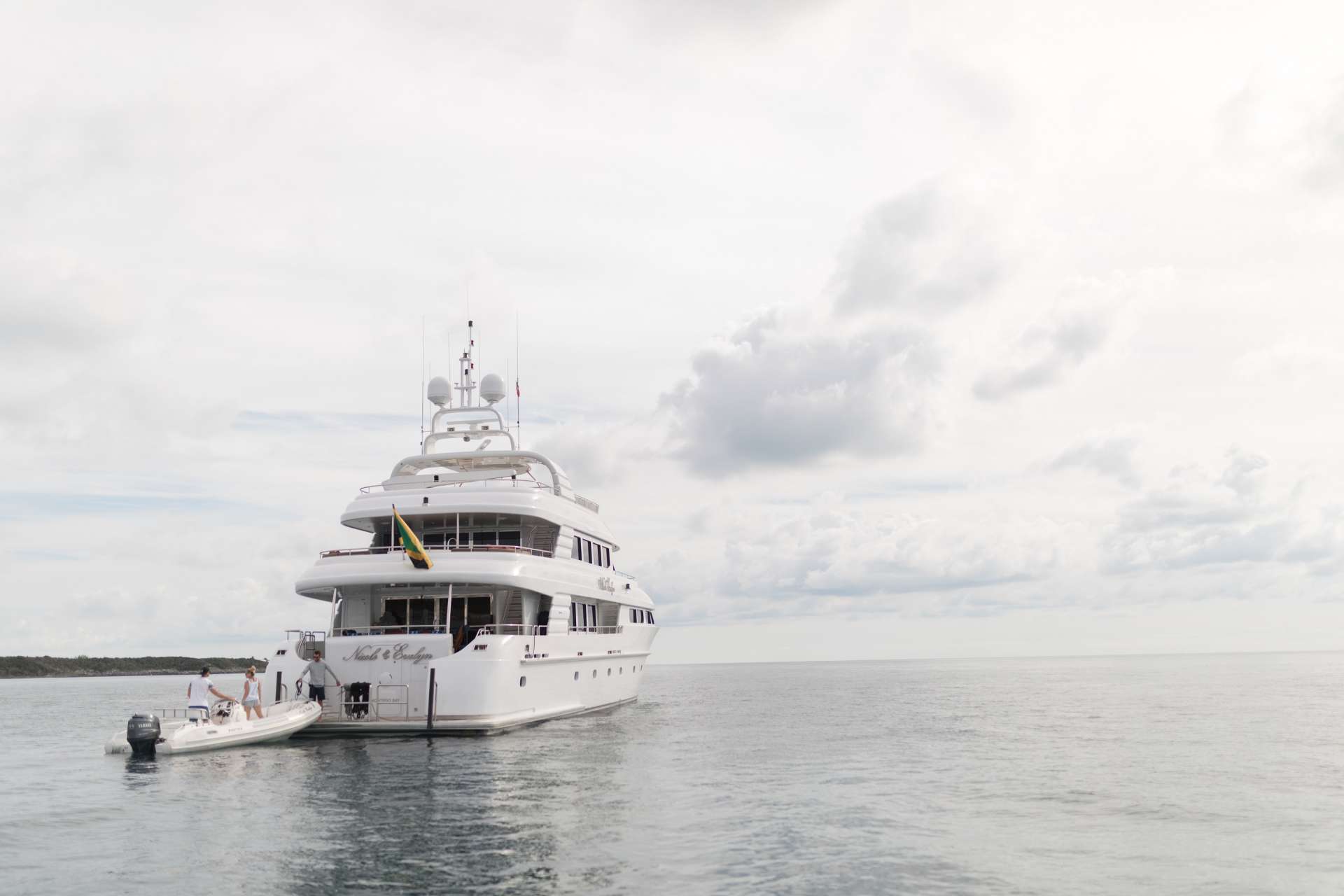 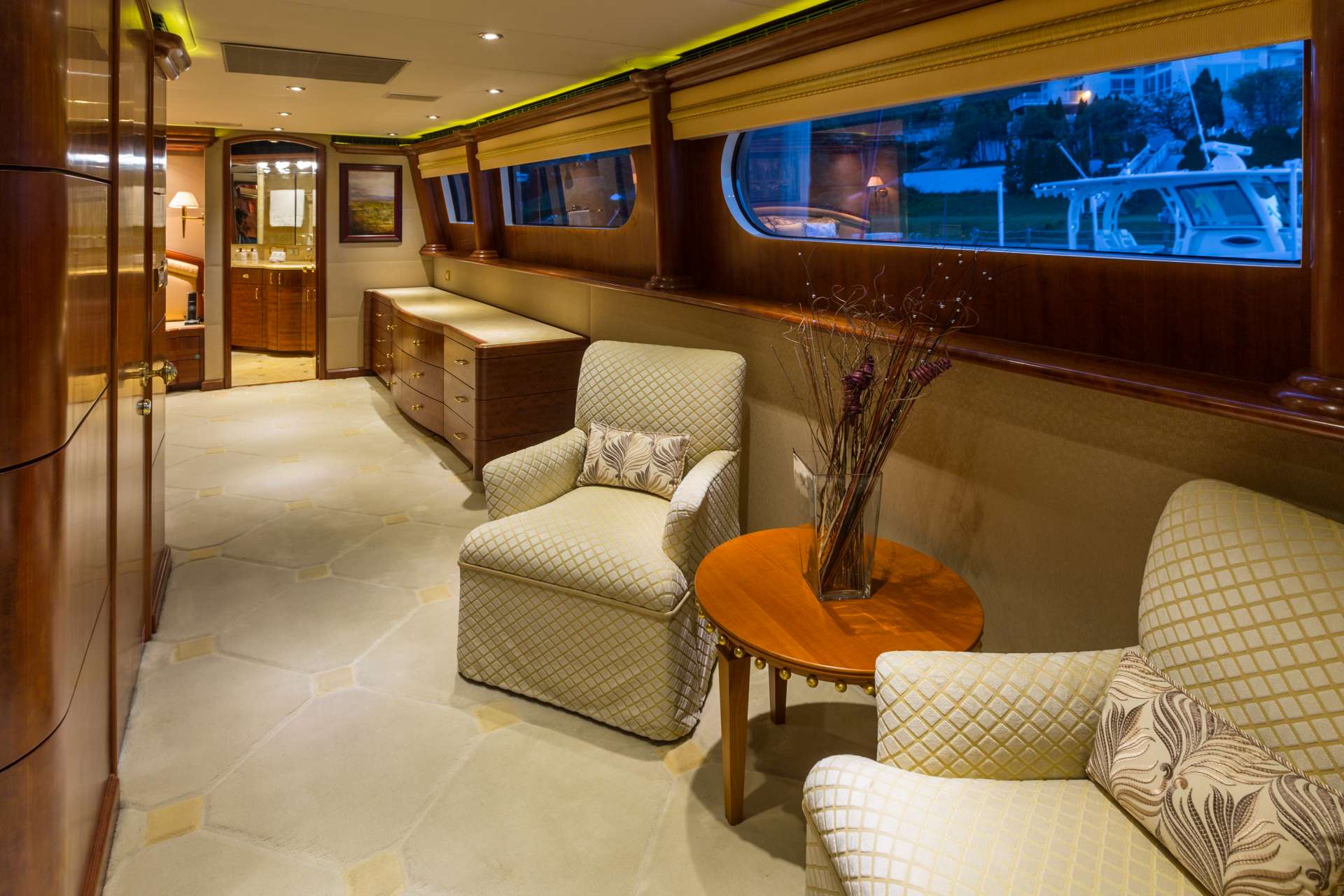 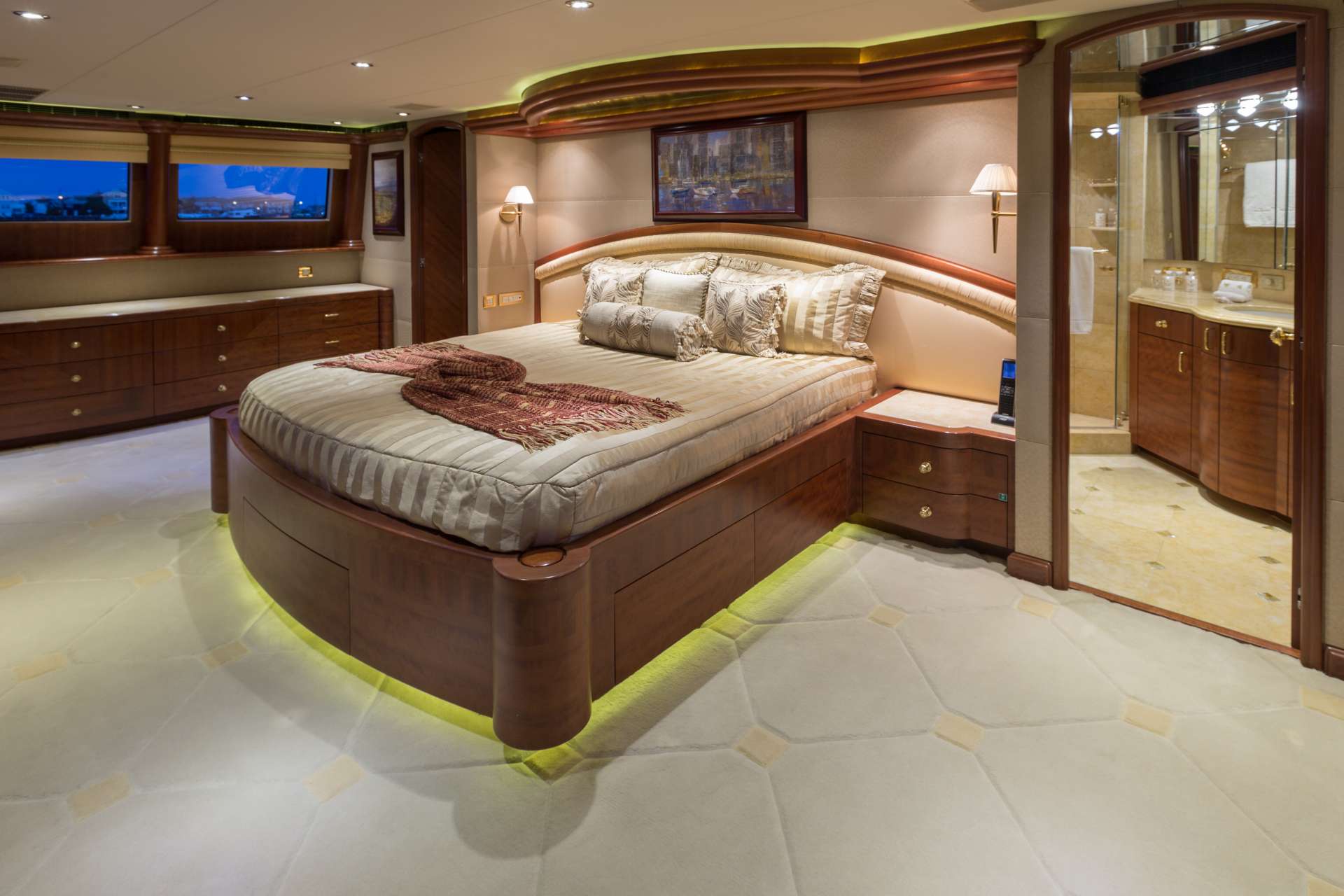 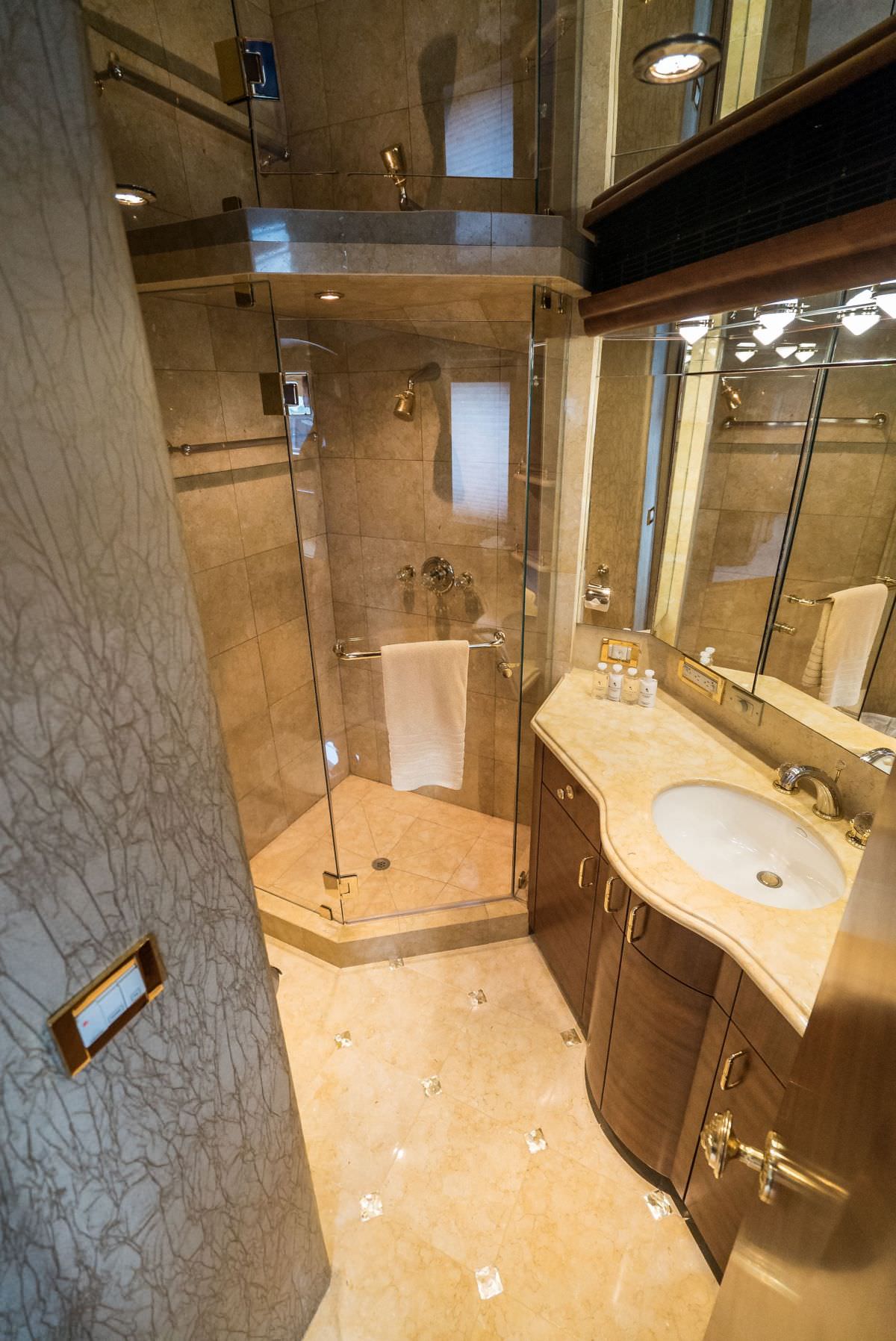 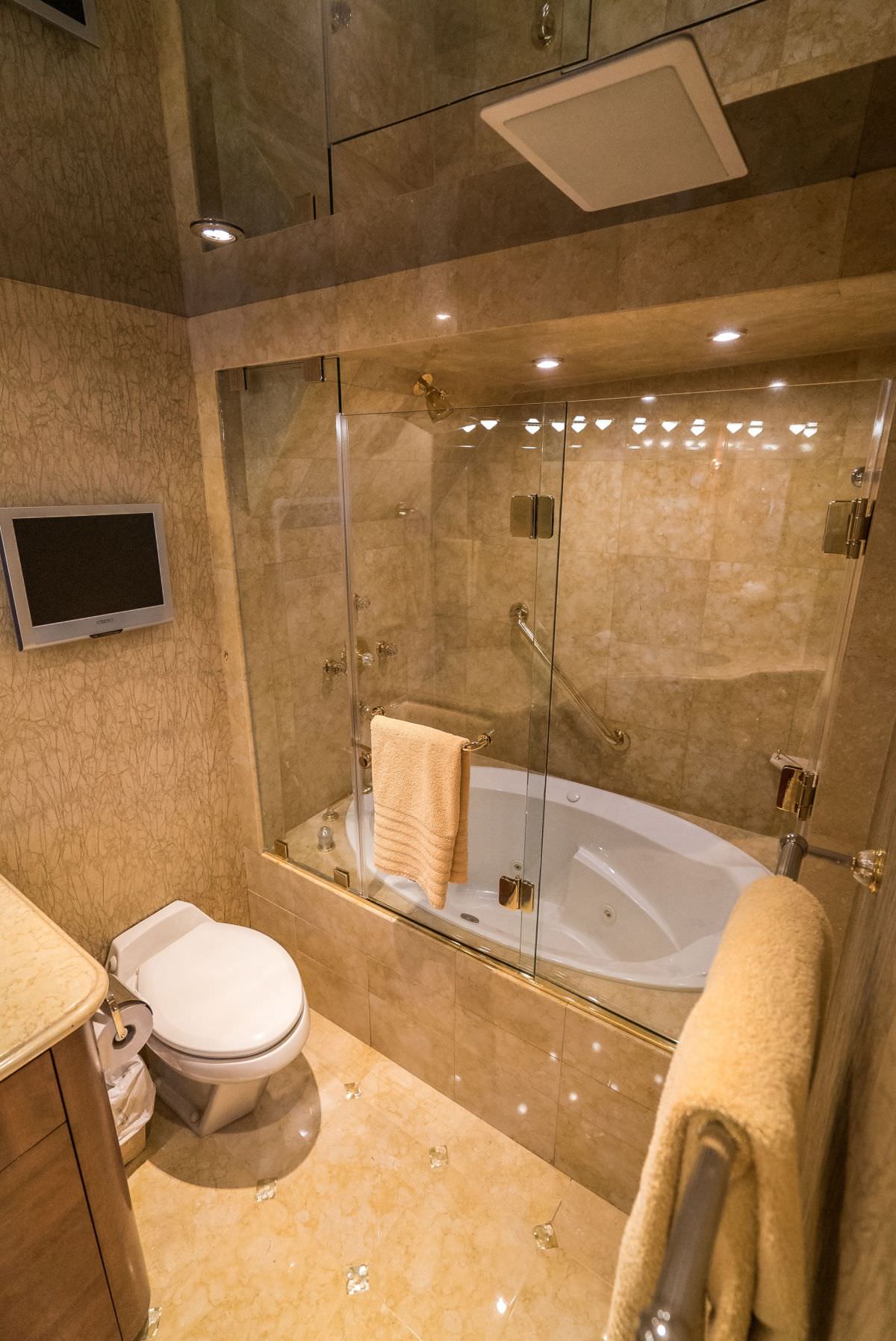 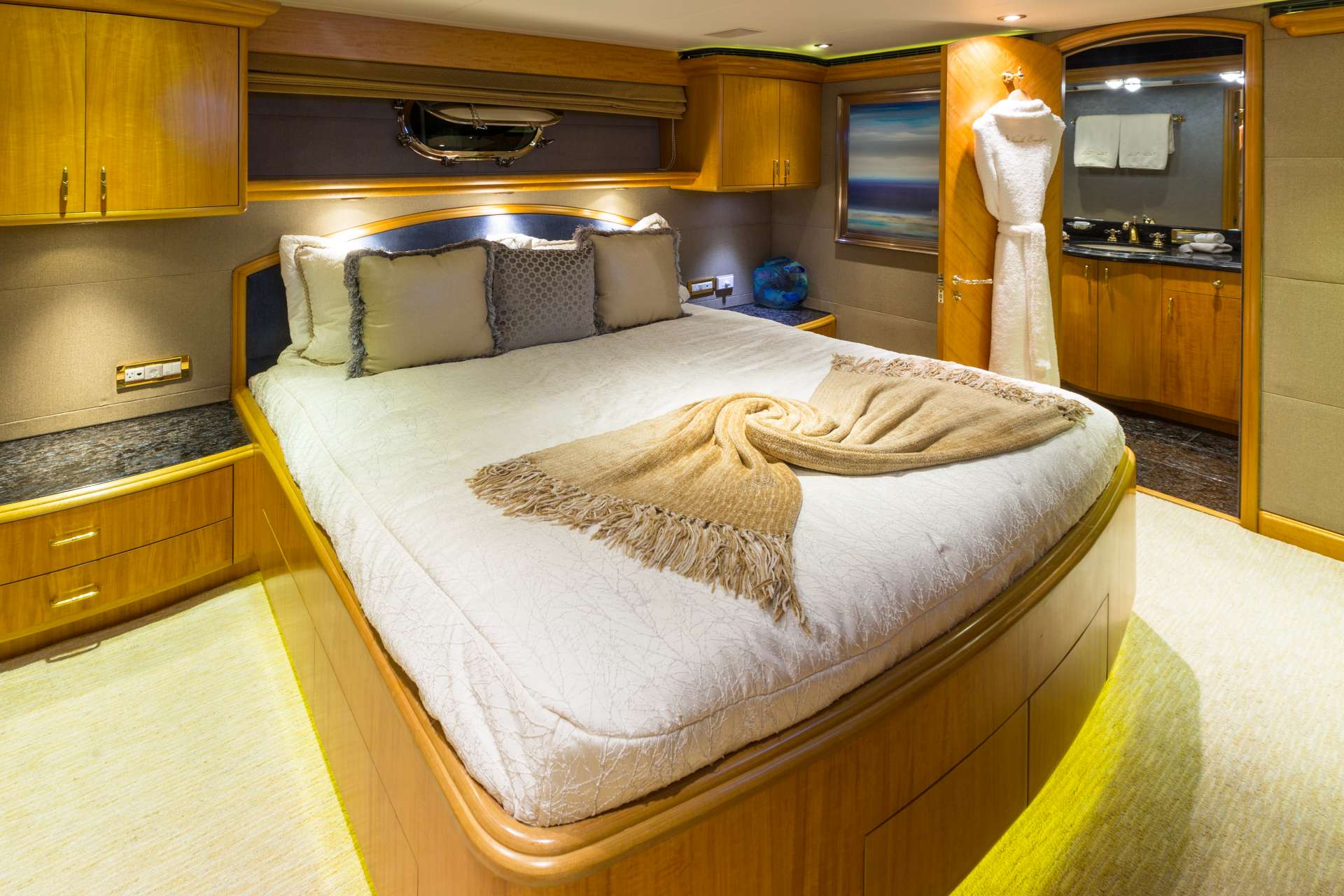 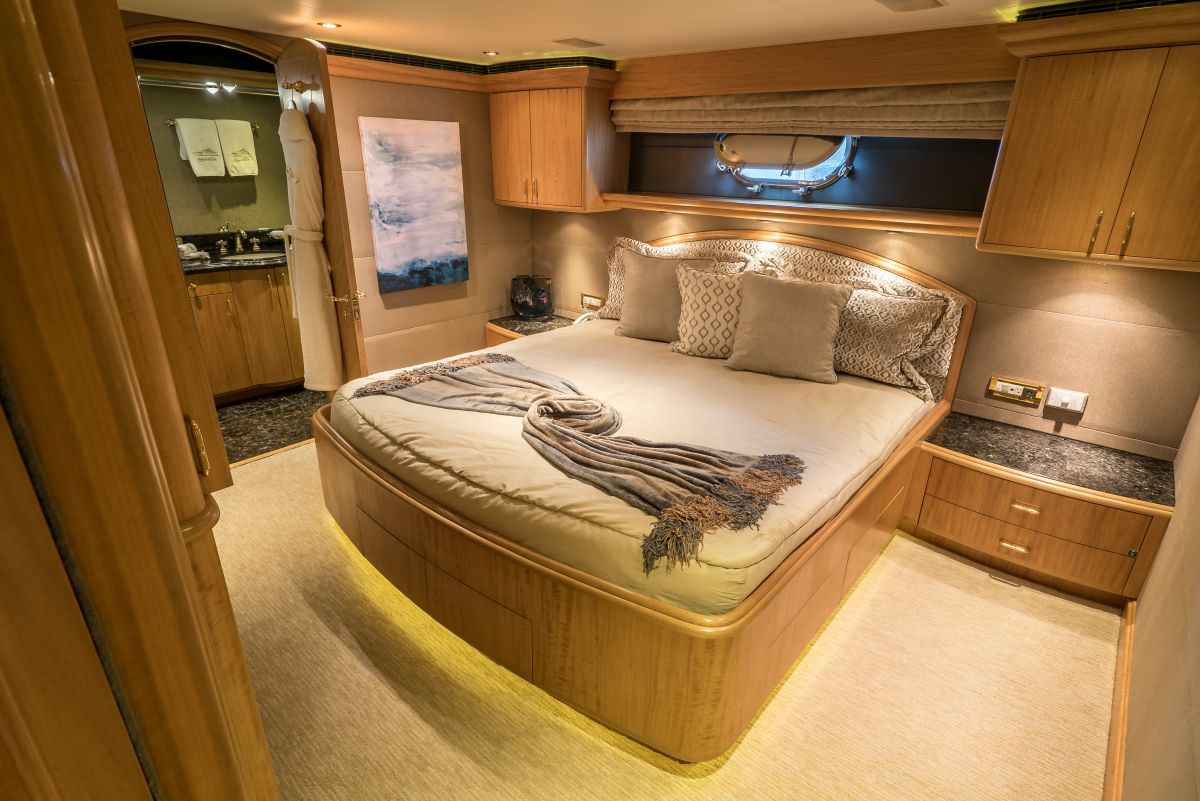 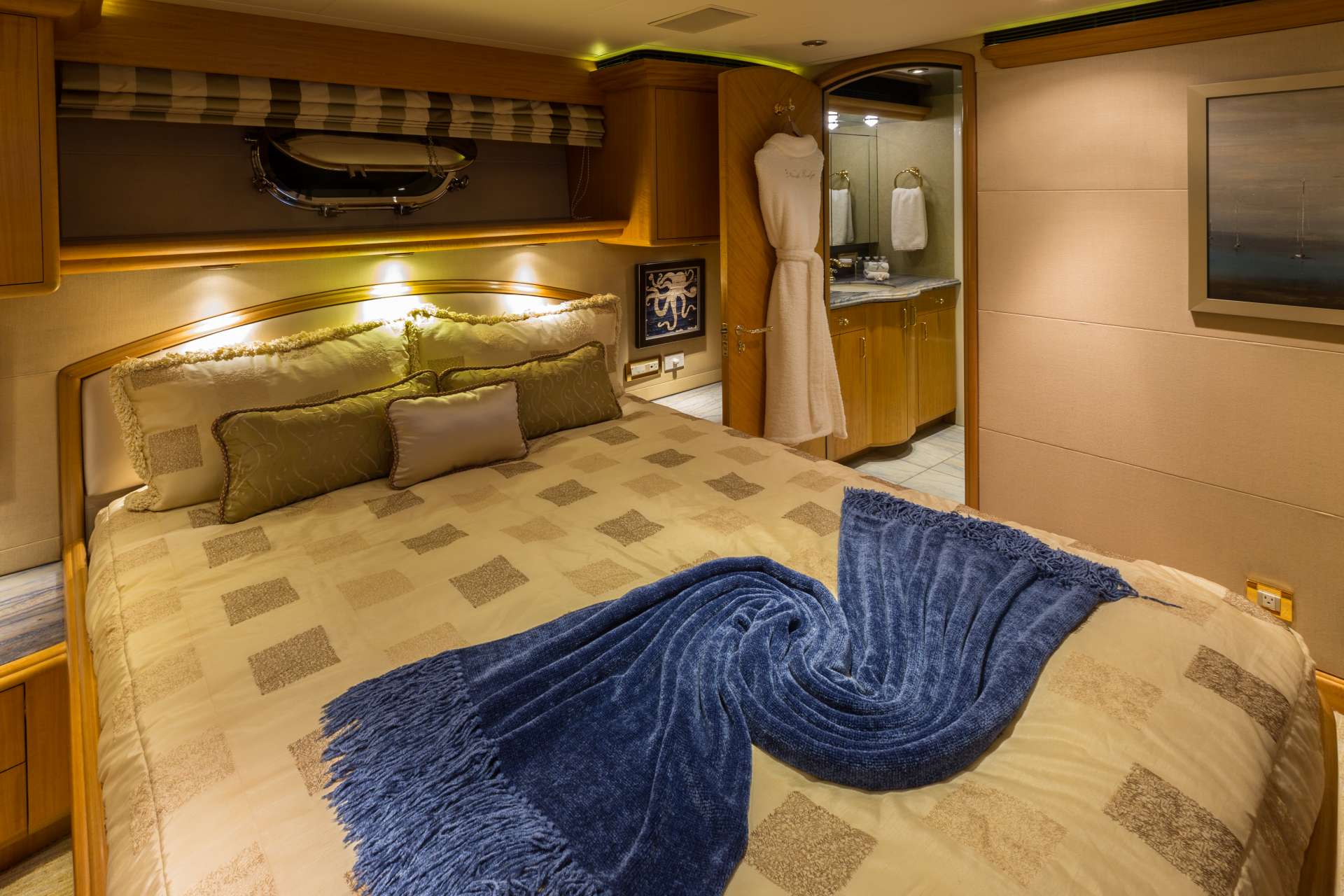 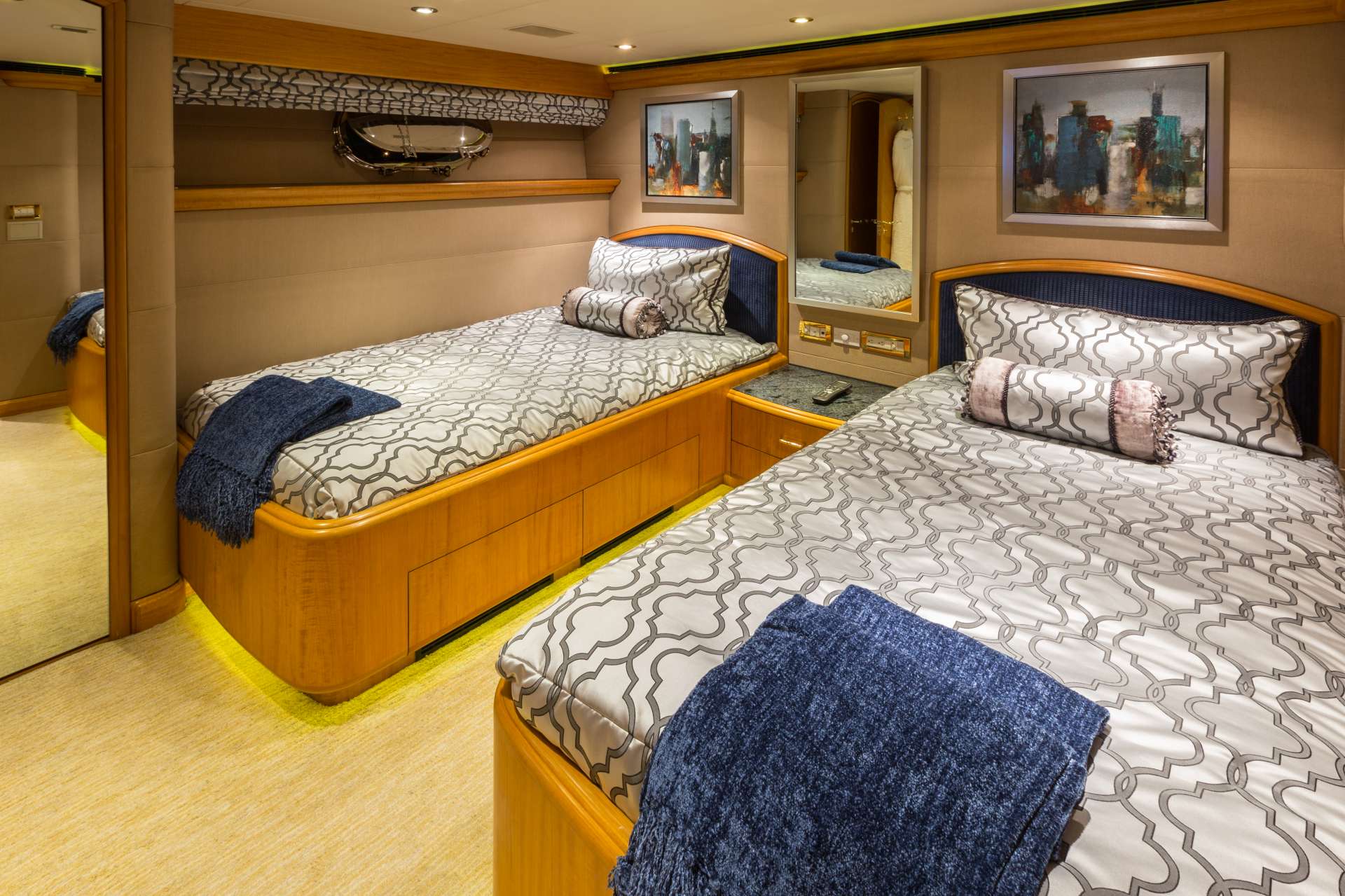 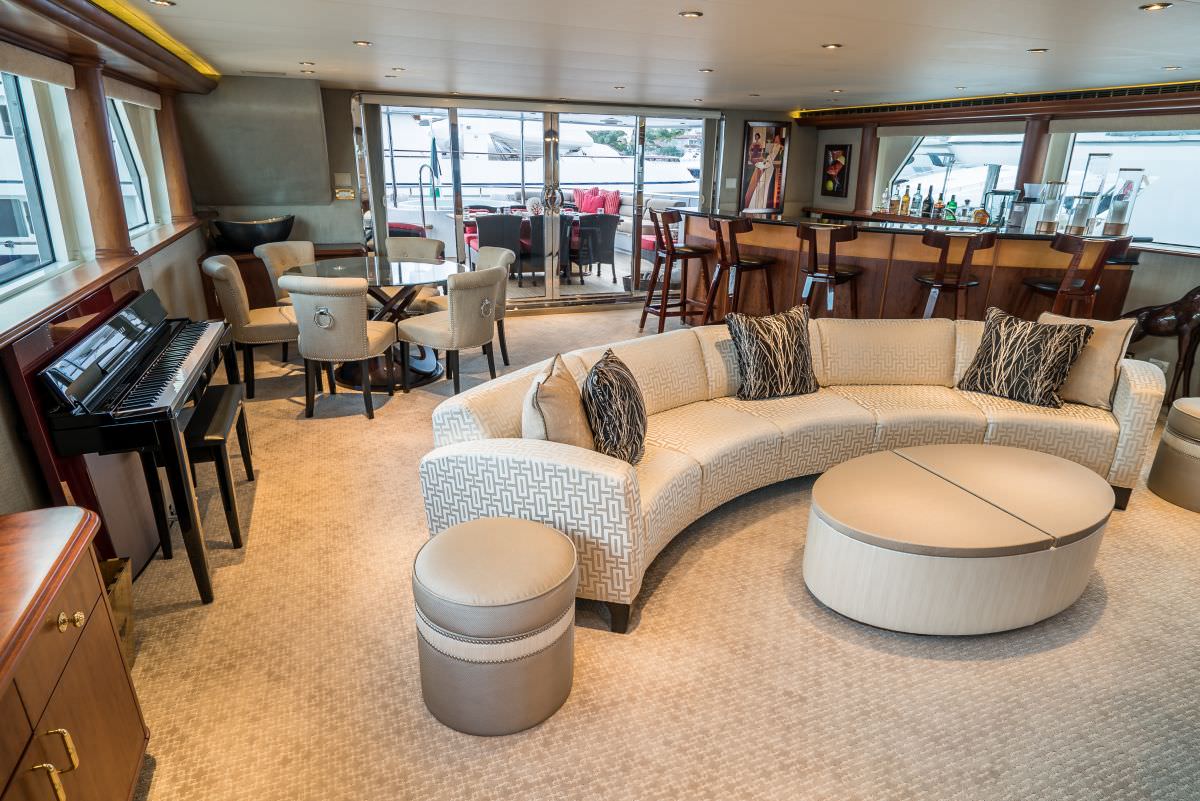 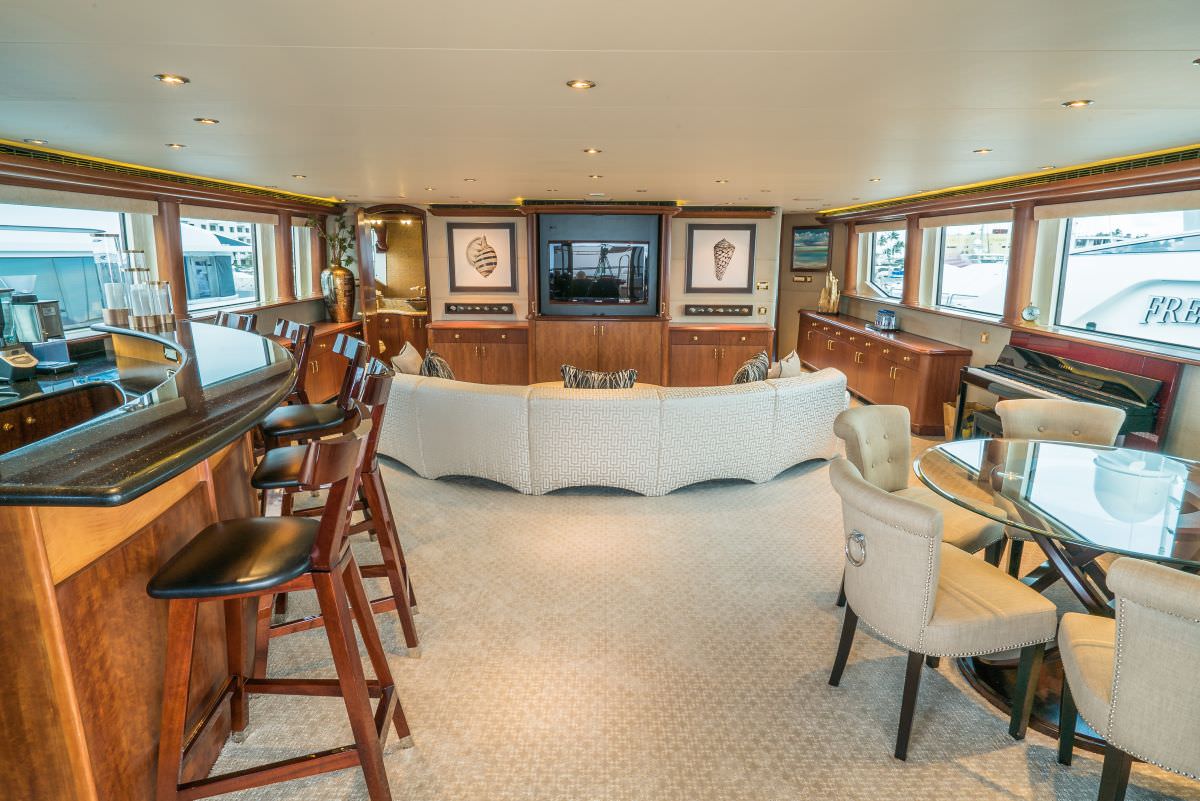 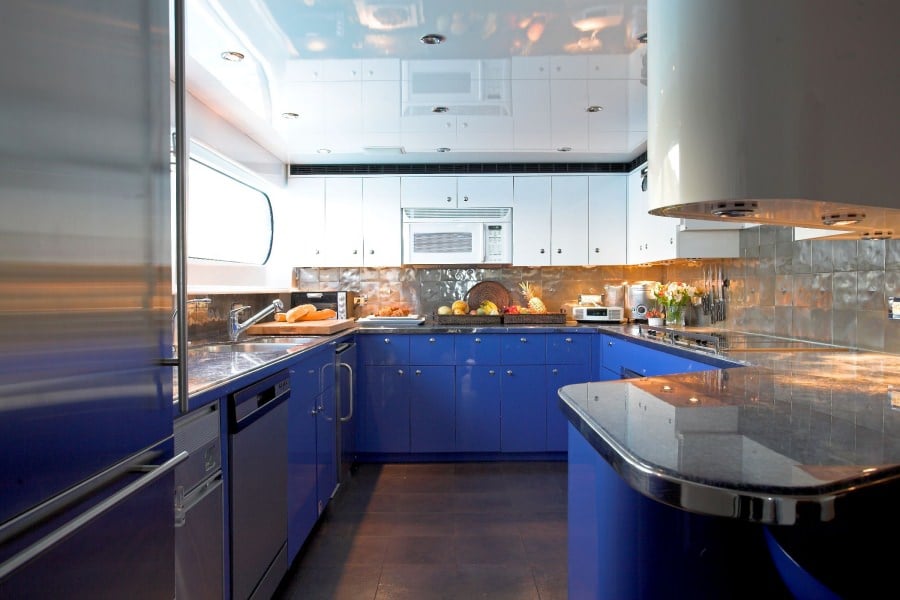 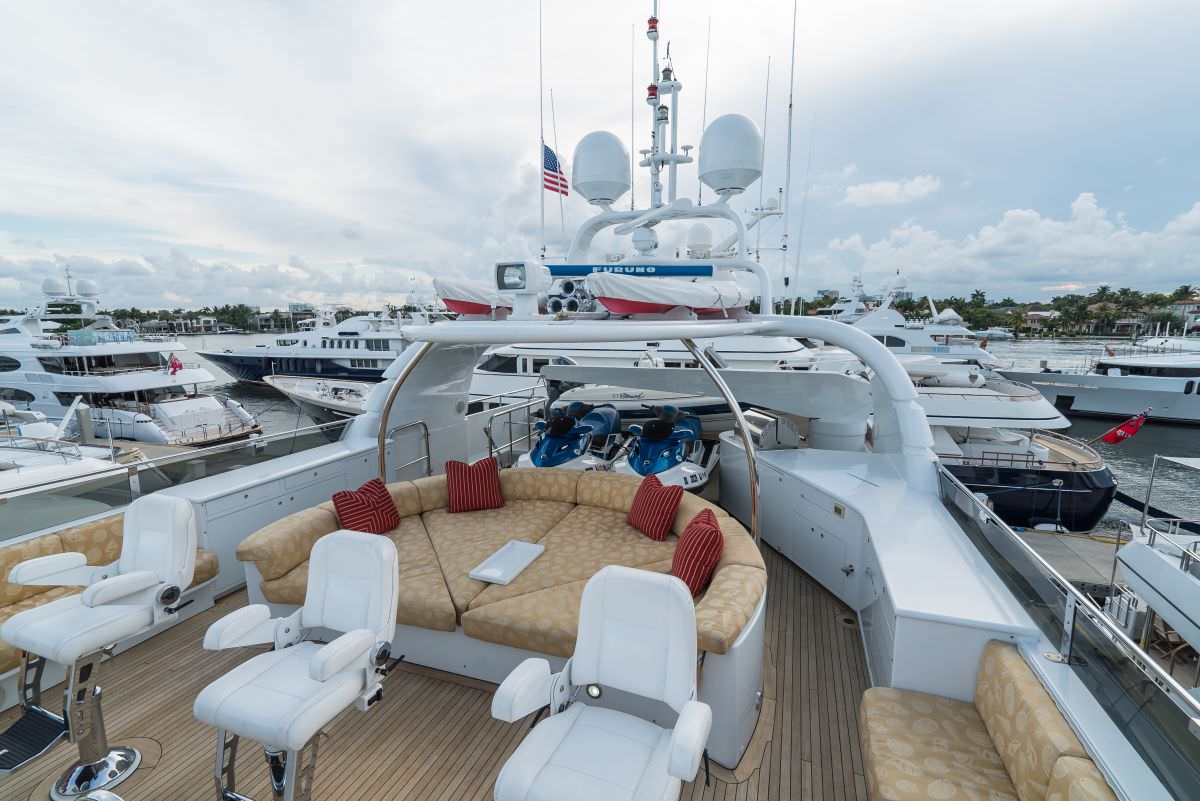 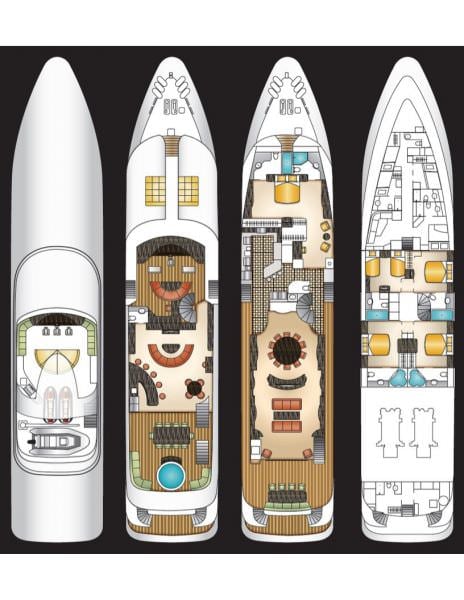 The interior volume is exceptional and typical of a much larger yacht. Al fresco dining options are available on the main aft deck as well as the bridge deck aft, while the expansive sundeck as well as the foredeck offer plenty of relaxation and lounging facilities.

Her large main salon features two large interfacing sofas and is separated from the formal dining by a four post entertainment center which holds a 37” flat screen TV on a rotational mount. The formal dining consists of a custom round dining table with Lazy Susan that comfortably seats 10.

The main deck is where the Master suite is situated with office/lounge entry, plenty of drawer and hanging storage for guests featuring a King size bed. A separate his and her bath is highlighted with Persian-gold marble vanity tops, floors and bulkheads including large Jacuzzi tub/shower/steam on her side and frameless shower on his.

Aft on the main deck is a mahogany inlaid hi/lo, in/out table that seats 10. Guests may easily access the bridge deck, foredeck, swim platform and sundeck with easy walkarounds and exterior stairs.

A great place to entertain is the skylounge (or bridge deck). Inside is a full bar with black granite top, 5 large full seat stools and a semi circular sofa facing forward to a large screen TV. Aft to starboard is a card table and electronic player piano. There is also a dayhead on this level. Through the double sliding doors is the outside covered teak deck which features a 32″ flat screen TV, teak dining table for 10 and a 6 person Jacuzzi with easy step with handrail access.

Up one more level is the sun deck where there is a helm plus 3 captains chairs forward, built in side seating, an oversized sun pad with plenty of back cushions centrally positioned and a BBQ grill.

Captain – Bill Hudek
Bill was born and raised in Pocahontas, Iowa. He graduated from Buena Vista University with a degree in Corporate Communication in 1988 and soon moved to Florida after graduation. He worked in Hotels in Naples, FL for a few years before joining the yachting industry. Going on 24 years, Bill has never looked back!

Bill has worked on boats large and small and holds a USCG 1600-ton Master Oceans license and a Dive Master Certification, he has worked on both Private and Charter boats. Bill enjoys keeping physically fit and enjoys bike riding, paddle boarding and swimming.

He met his lovely wife Louise in St Maarten on a long layover and the two have been married for twelve years and have a beautiful Shar-Pei dog named Lotus. Louise is a Master of Oriental Medicine. They reside in North Palm Beach, Florida.

He also hosts Karaoke night on board and has been known to do a Sinatra song when asked.

Kris Signs – Engineer
Kris was born in Sonoma County California and attended El Molino high school in Forrestville California. He started working on cars at a young age with the help of his grandfather and pursued a mechanical career.

He started working off on small engines at a rental yard and moved up to heavy construction equipment before eventually moving to Florida and becoming a yacht engineer.

For the last seven years he has worked his way up in the Engineering ranks on big Super Yachts and has kept his vessels running smoothly in the US, Bahamas, Caribbean, South Pacific, Baltic and Mediterranean.

Kris will assure that the yacht is always in good, safe, working order.

Richelle Saylo – Chief Stewardess
Richelle was born and raised in the Philippines. She graduated from JBLFMU Maritime University with a degree of Hospitality Management. She has been in yachting industry for over ten years and enjoyed travelling throughout the Mediterranean, Baltic, Adriatic, Caribbean and the Bahamas. She has a passion for food and travel and she has been lucky enough to explore many different countries, enjoying international cuisines from places she visited.

Richelle loves travelling, fashion, photography and arts and being in the yachting industry, she feels it is a great industry to be part of to do all the things she loves.

Mikaela Brazil – Second Stewardess
Mikaela was born and raised in Brazil and started travelling to the United States, Canada and South America when she was a teenager.

She has always dreamed of travelling around the world to meet new people and to immerse herself into new cultures. She is fluent in Portuguese and English and intermediate in Spanish and French. With her love to make people happy she bartended in various restaurants around Sao Paulo enjoying creating new cocktails for people to enjoy. She spent six months in Canada volunteering at AllanCroft School for people with disabilities.

Her love for meeting new people and travelling led her to the yachting industry a year ago. With her bubbly personality she strives to ensure guests are enjoying themselves at all times. Customer service is what she is most passionate about and one day dreams of opening her own hostel in Brazil.

Tyler Sumner – Mate
Tyler was born in Birmingham, Alabama but spent five of his formative years living with his family in Colombia, where he became fluent in Spanish. He attended the University of Alabama and worked several years in hospitality management before beginning his yachting career in 2012.

Tyler has worked onboard several other motor yachts before joining Nicole Evelyn. Aboard one of these he began a Pacific Ocean crossing in January 2014, departing Florida with stops throughout the Caribbean. From there Tyler went on to work aboard several motor yachts in the South Pacific and Australia.

Tyler is a PADI certified Divemaster, licensed Pilot, and enjoys exercising, Bikram yoga, and reading in his free time. He looks forward to making your stay onboard Nicole Evelyn comfortable, exciting, and memorable!

Emma Whitney – Deckhand
Emma was born and raised from the East Coast of Australia. Having graduated from Southern Cross University with a double bachelor’s degree in Sports Tourism Management, Majoring in Business and Marketing she went on to lead a successful 10 year career in International Sales Marketing promoting Australian destinations to the world. Through her corporate career she has travelled to Europe, America, Canada, the Middle East and China, giving her a great understanding of cultural differences and guests needs when it comes to having an exceptional holiday experience.

She began her yachting career in the beginning of 2019 having previously worked with Superyachts in the Whitsundays located on the Great Barrier Reef. With an innate love for the ocean, travelling, sports, yoga, snorkeling, diving, fashion and photography.

Emma always strives to ensure guests will have an incredible yachting experience and a new or continued love for the ocean and the environment.

Shawn Semmler – Chef
Shawn Semmler all her life has been an artist. Originally from outside of Chicago she went to Savannah, Georgia to get her bachelors art degree from the Savannah College of Art and Design.

It was during this time she formed her appreciation for gourmet cuisine by working in high-end published restaurants while in college. After six years owning a faux finishing mural business she stumbled upon the yachting industry in 2002 by way of painting.

Cuisine found her again as her new artistic medium and would not let go. Exploring the new and different culinary treats each country offers is a passion of hers.

After sixteen years of cooking on yachts and estates, fulfilling new and varied appetites, she still loves it!