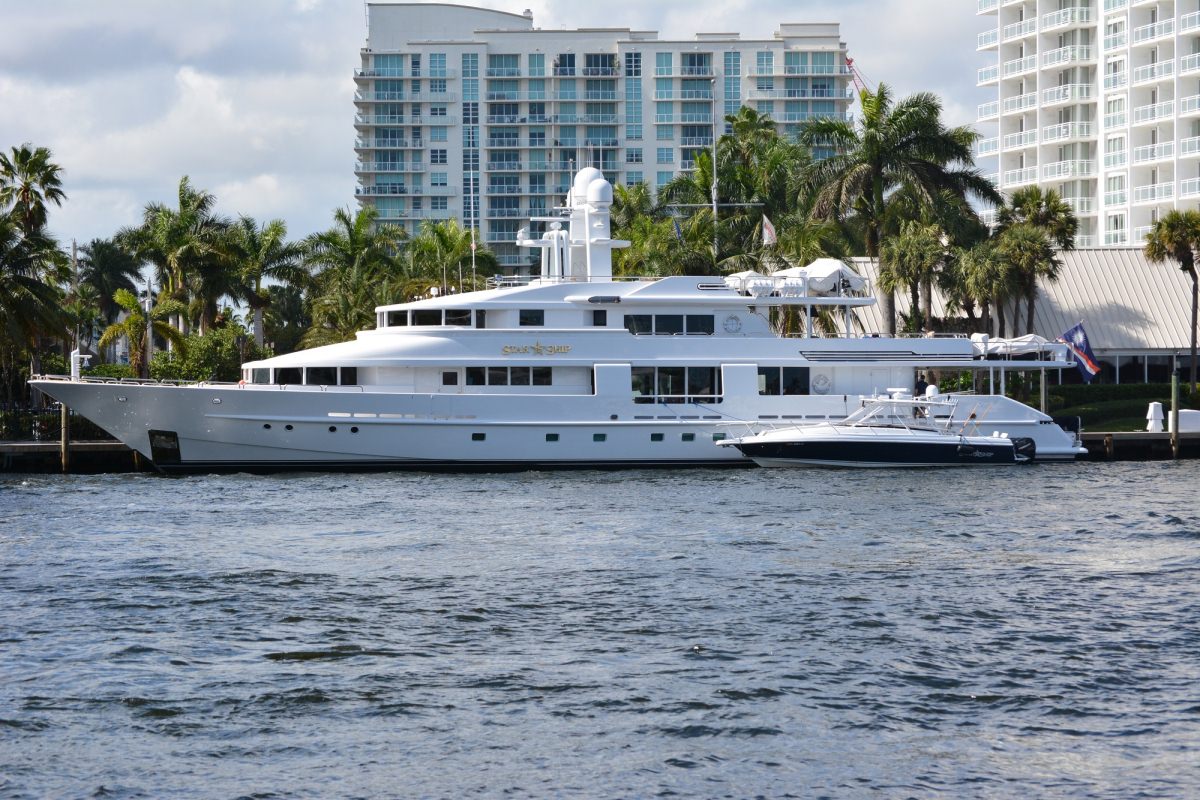 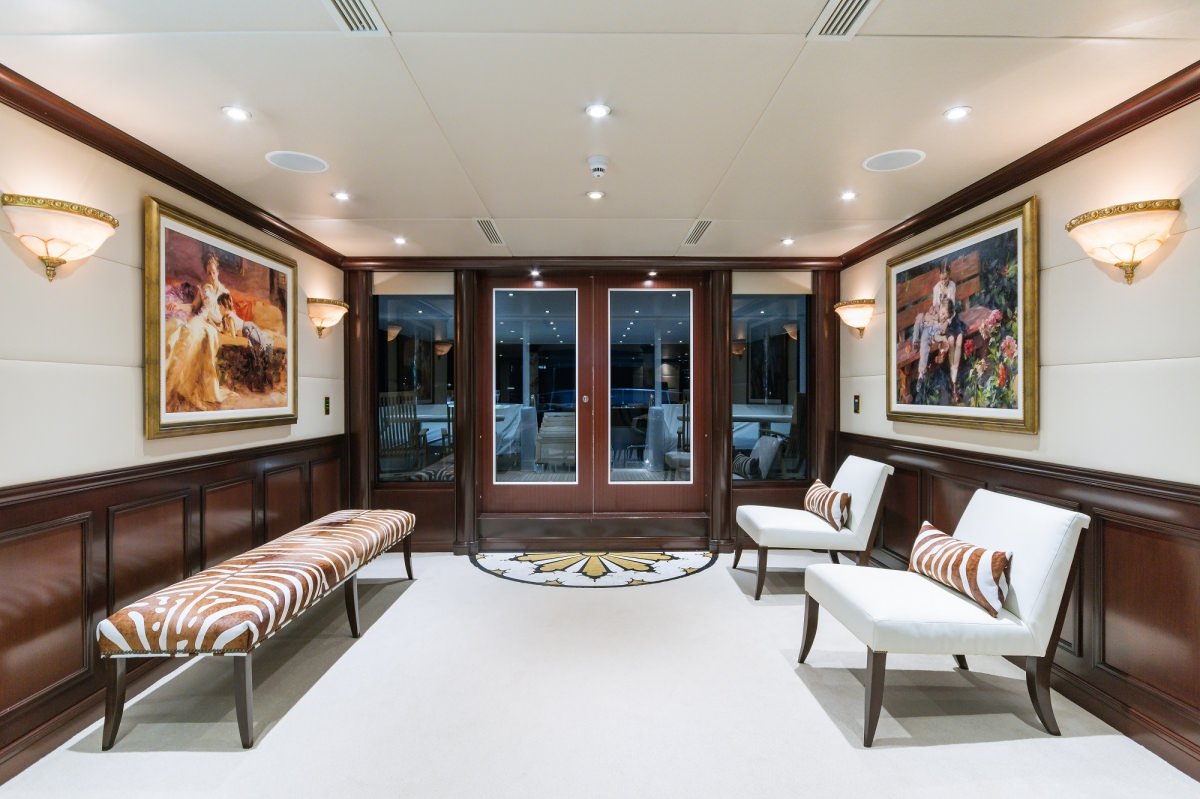 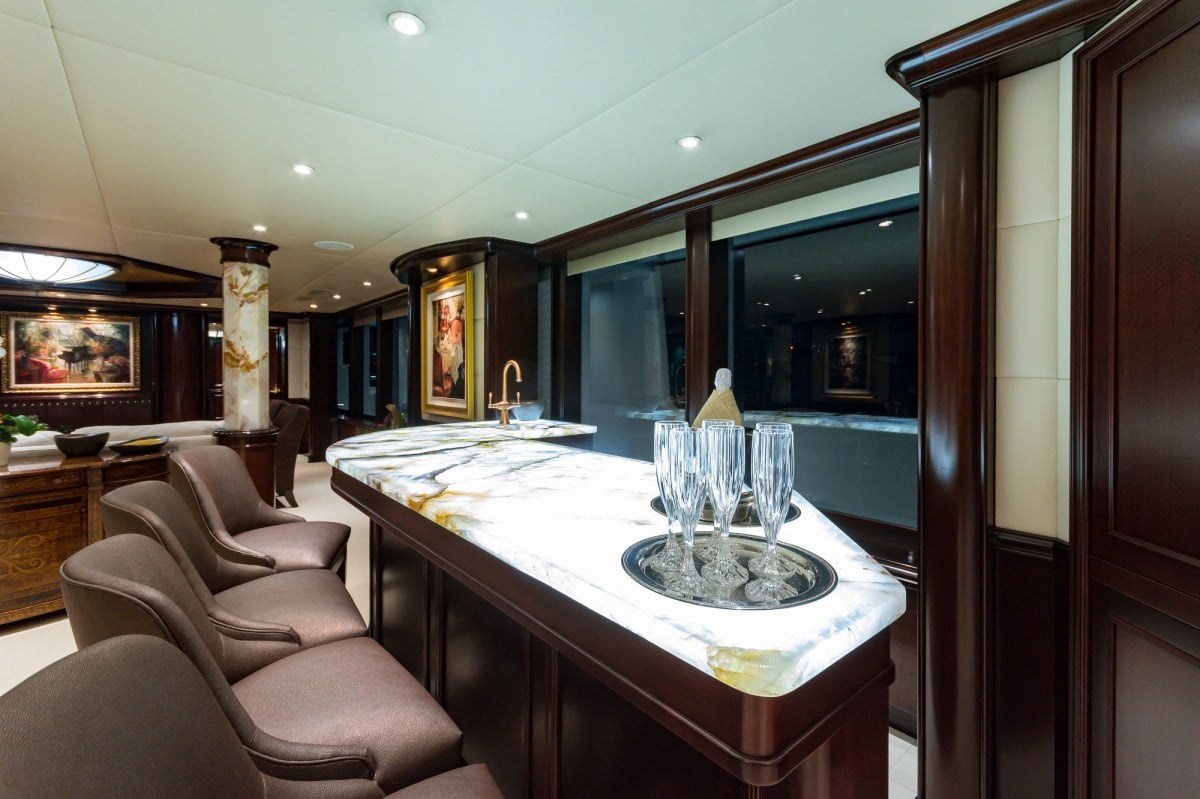 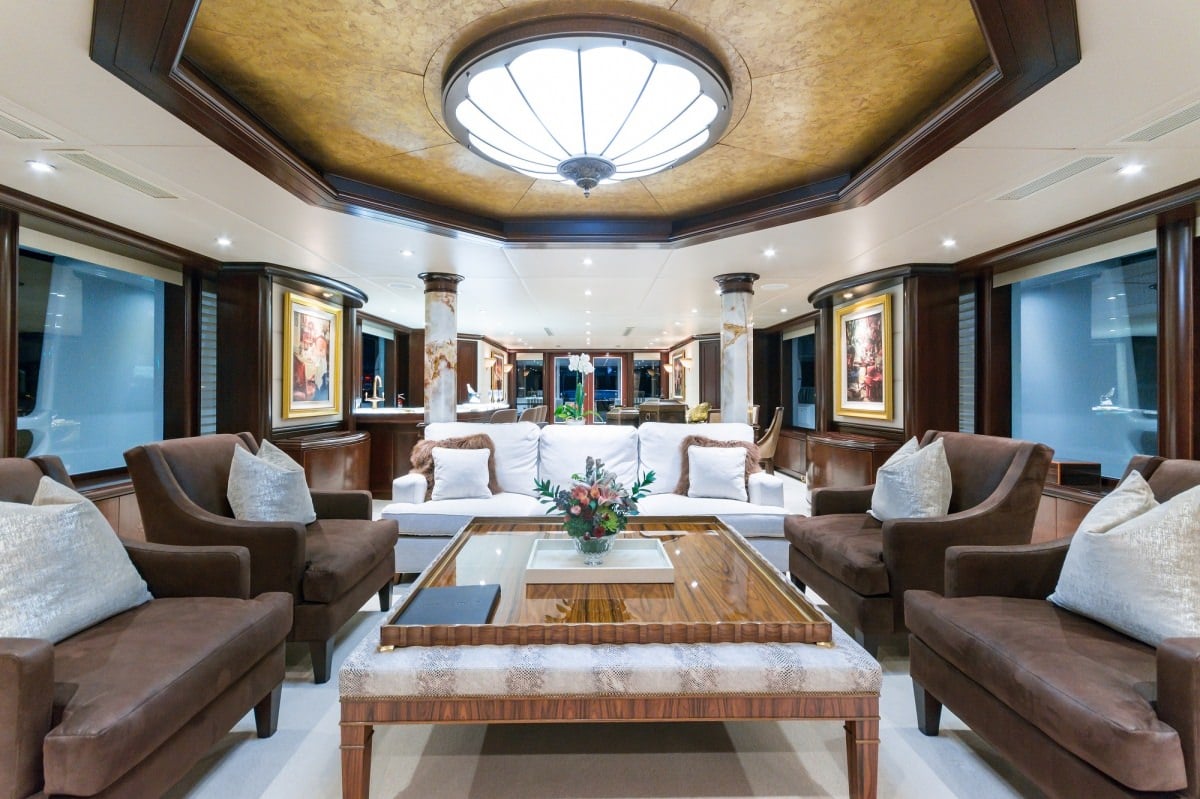 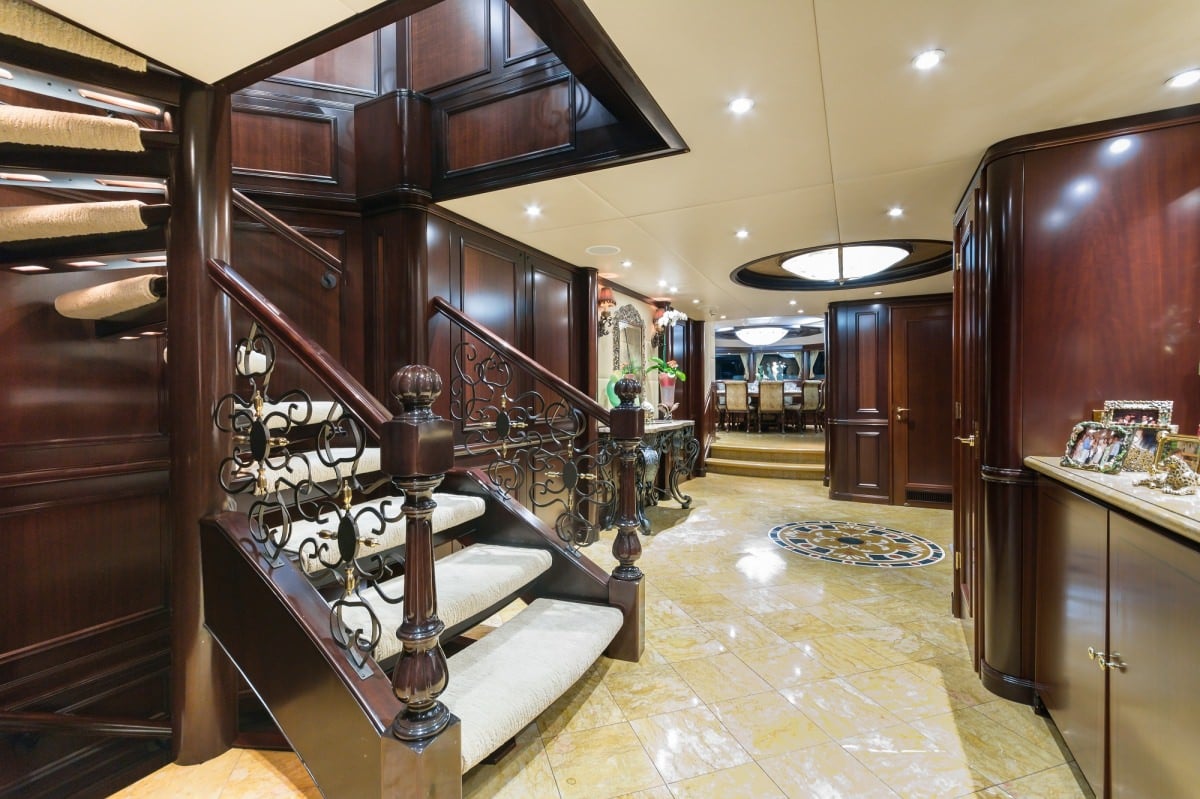 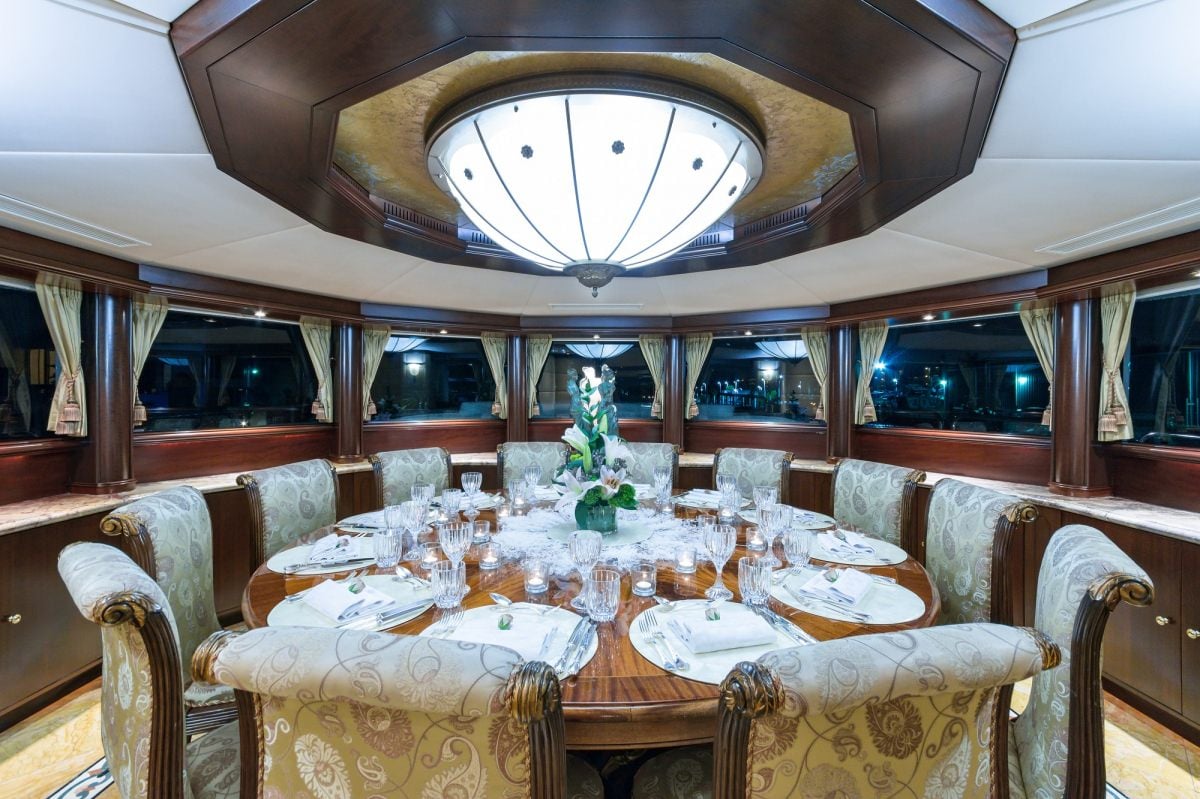 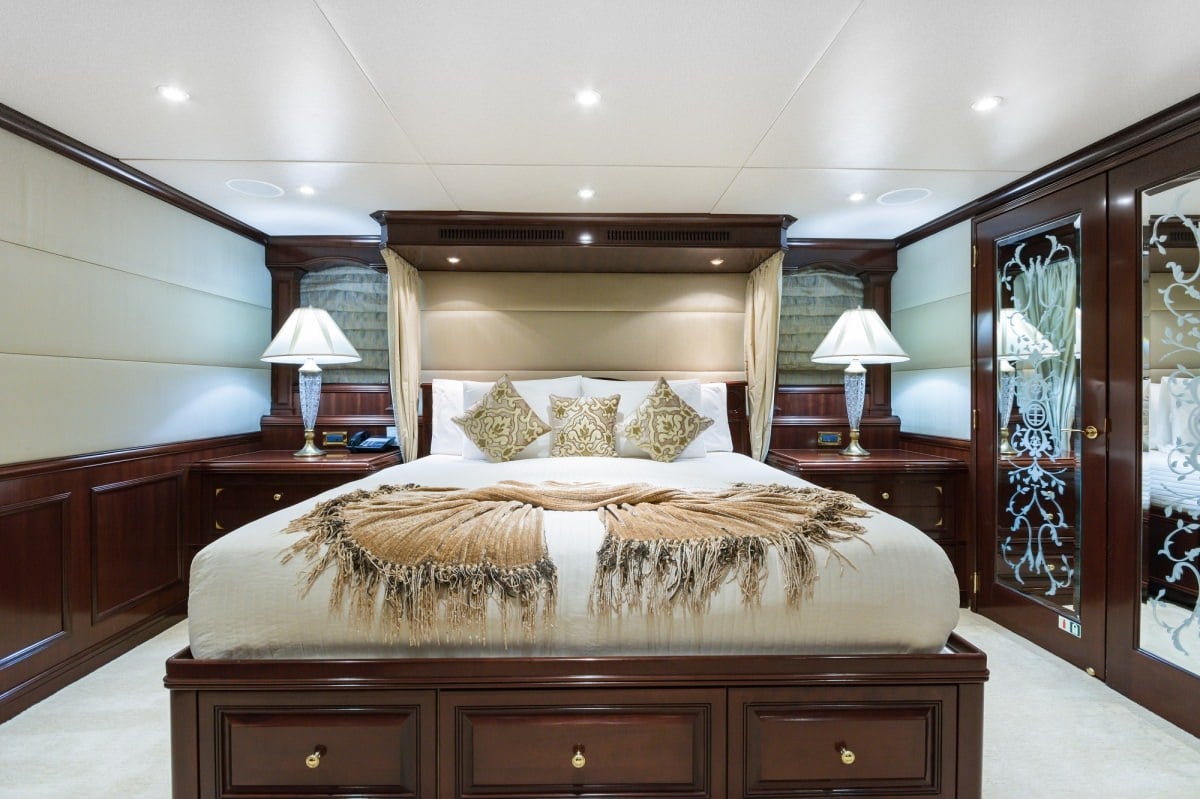 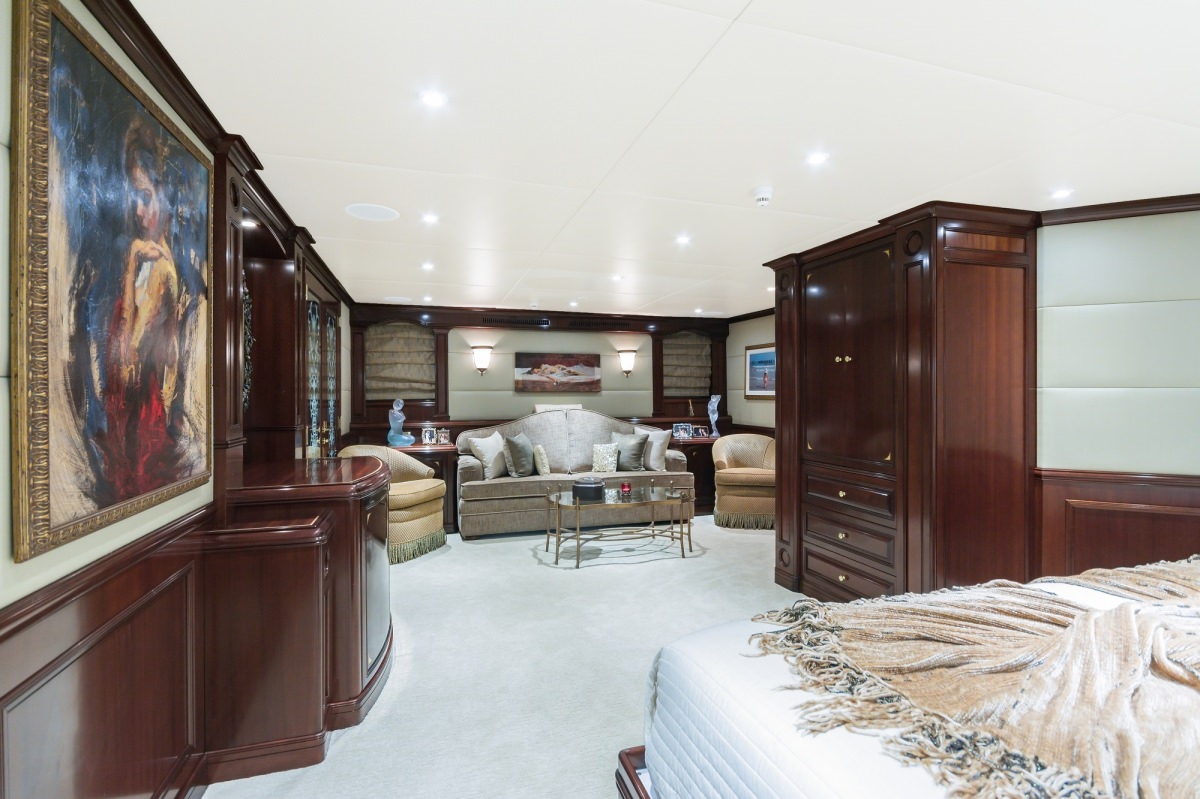 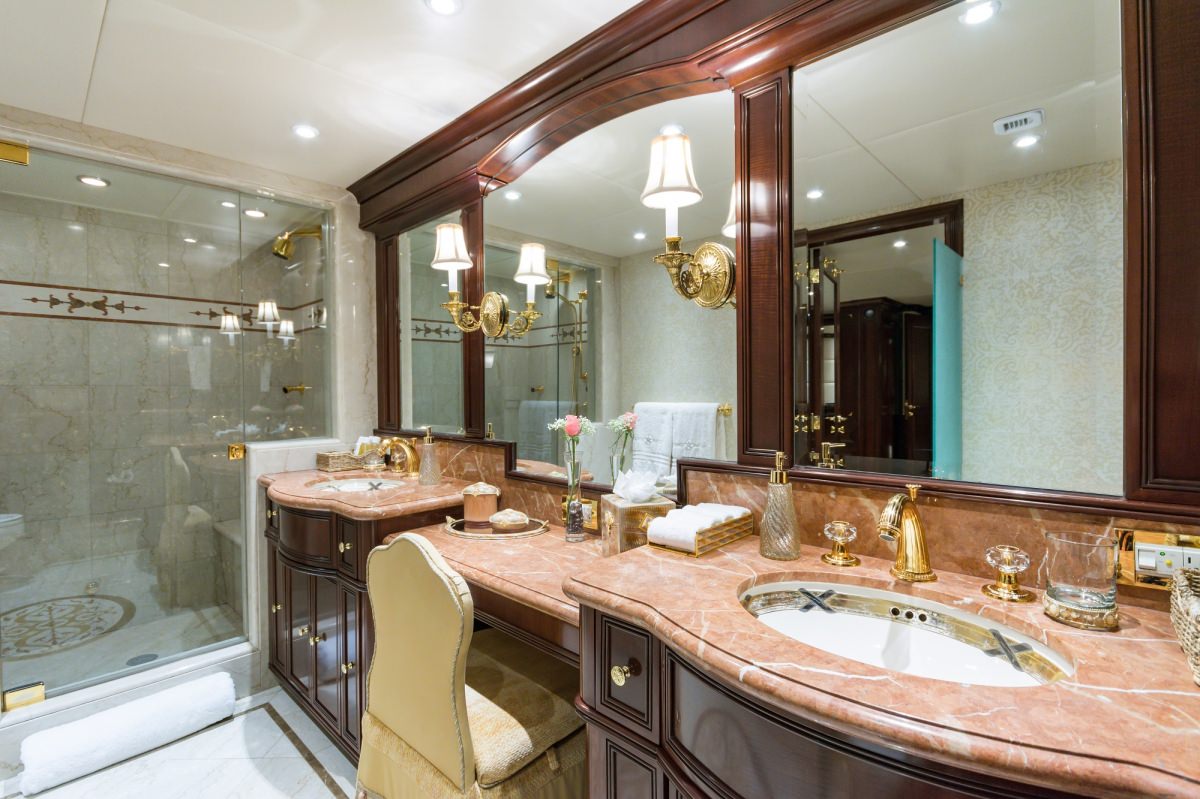 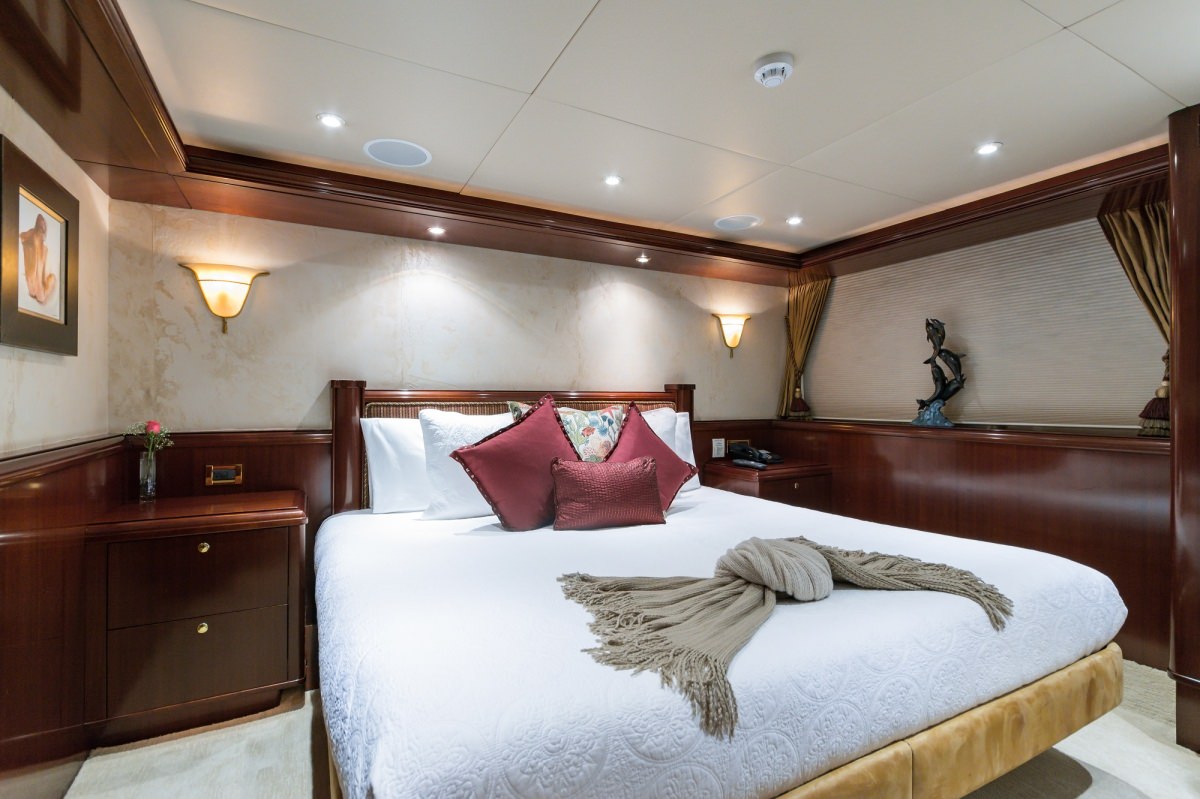 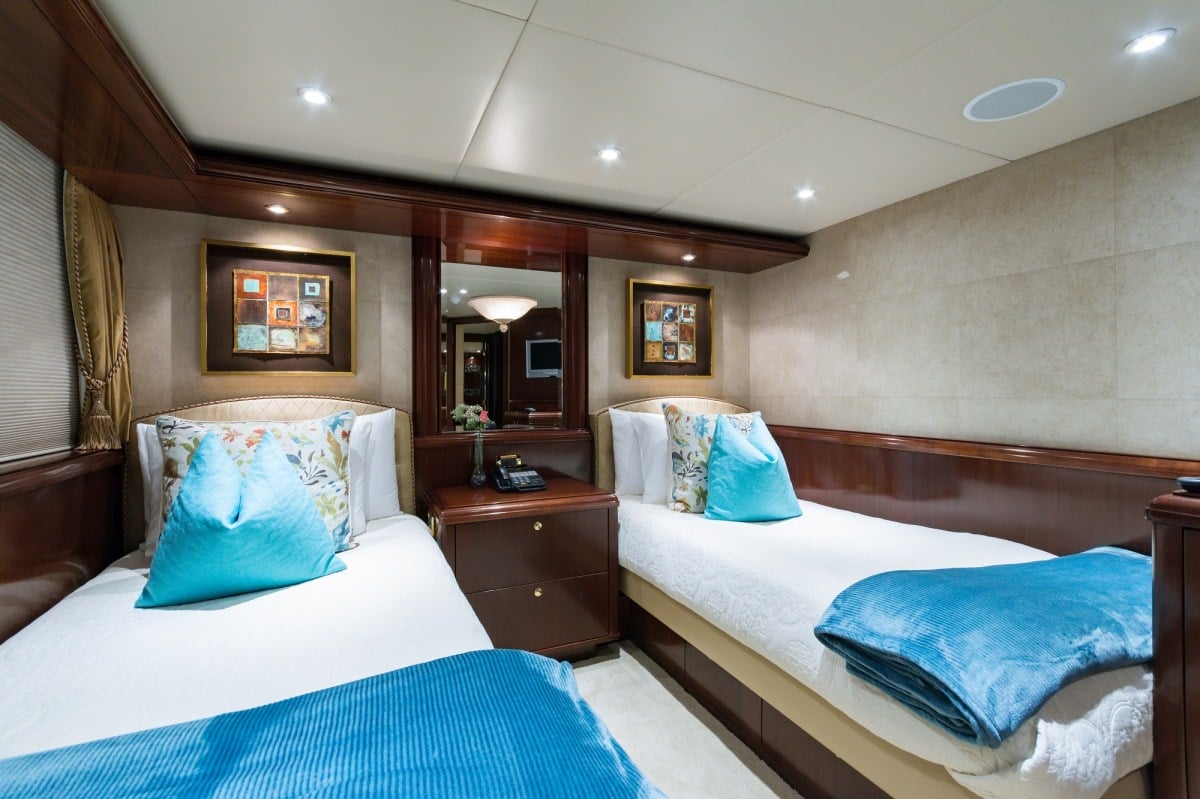 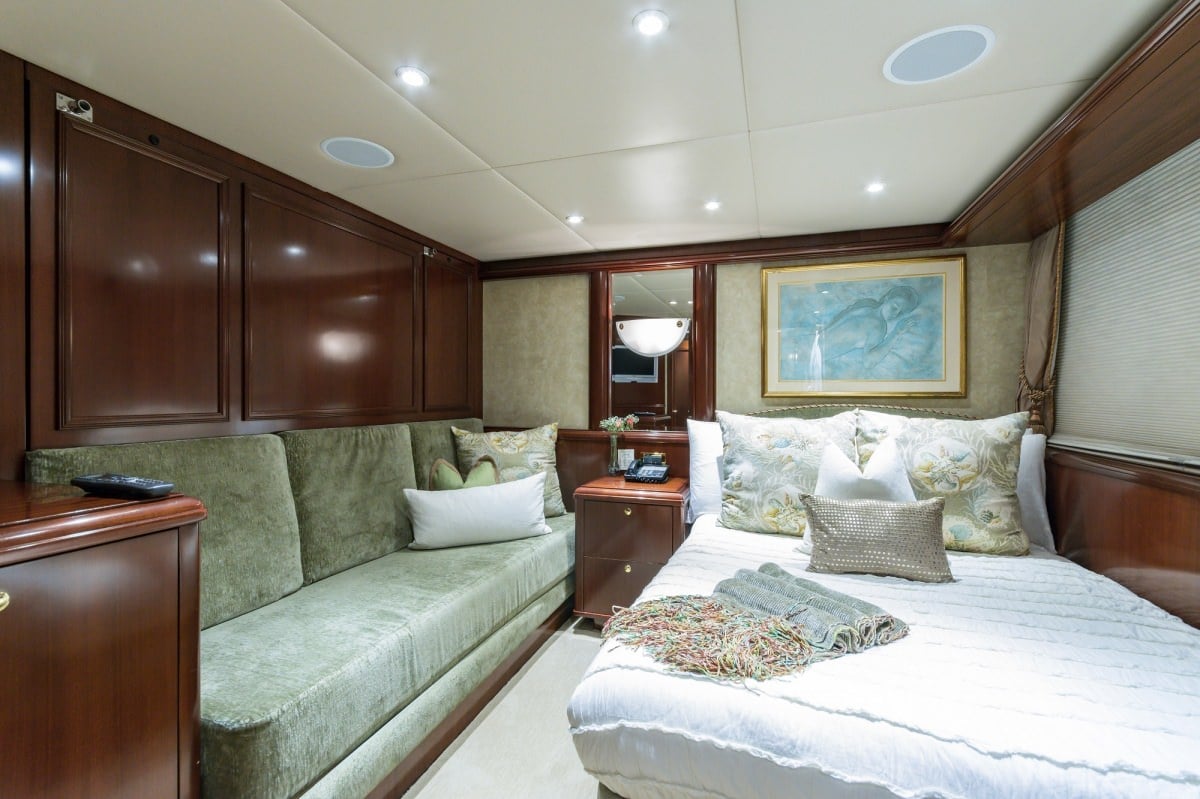 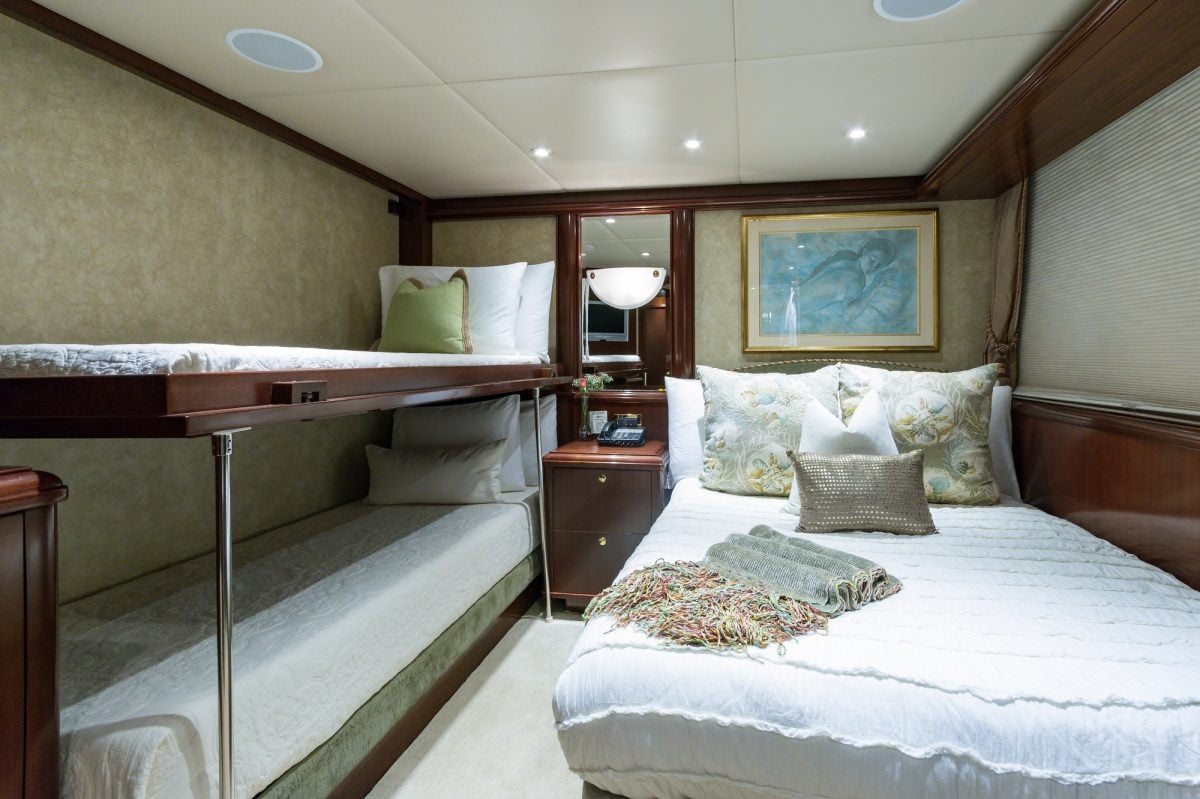 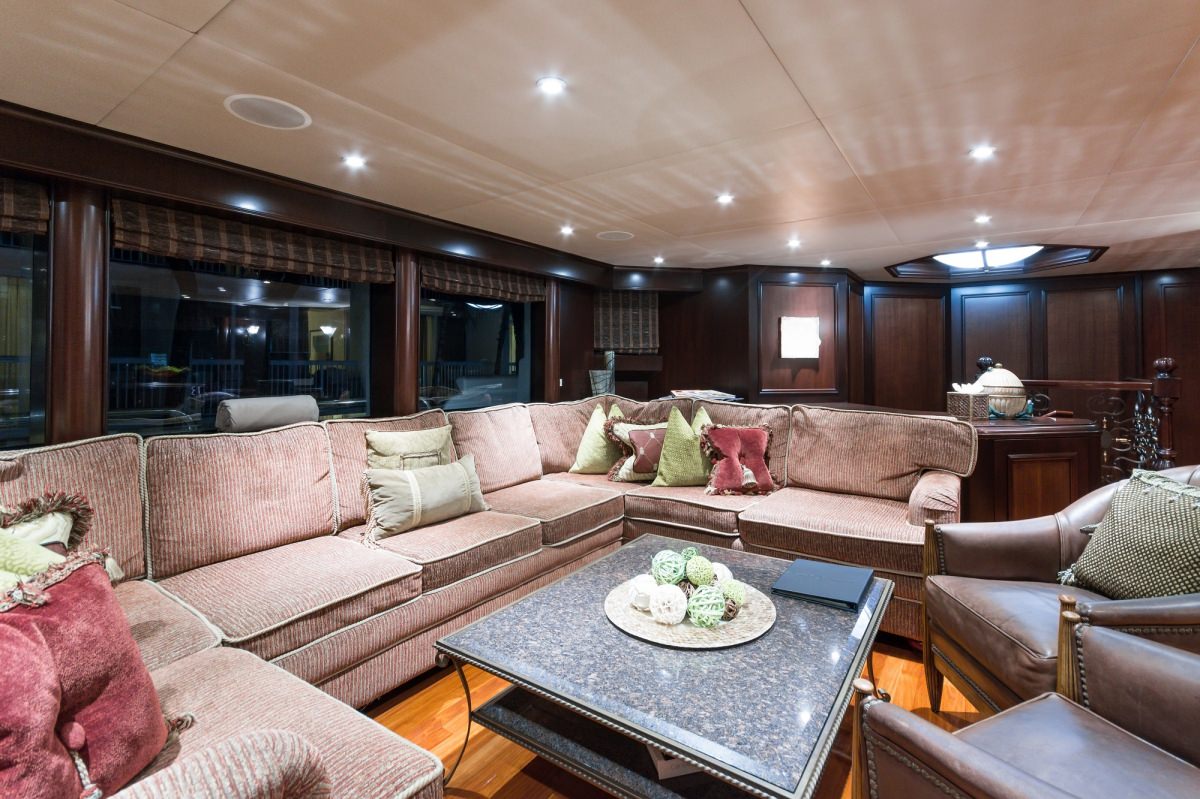 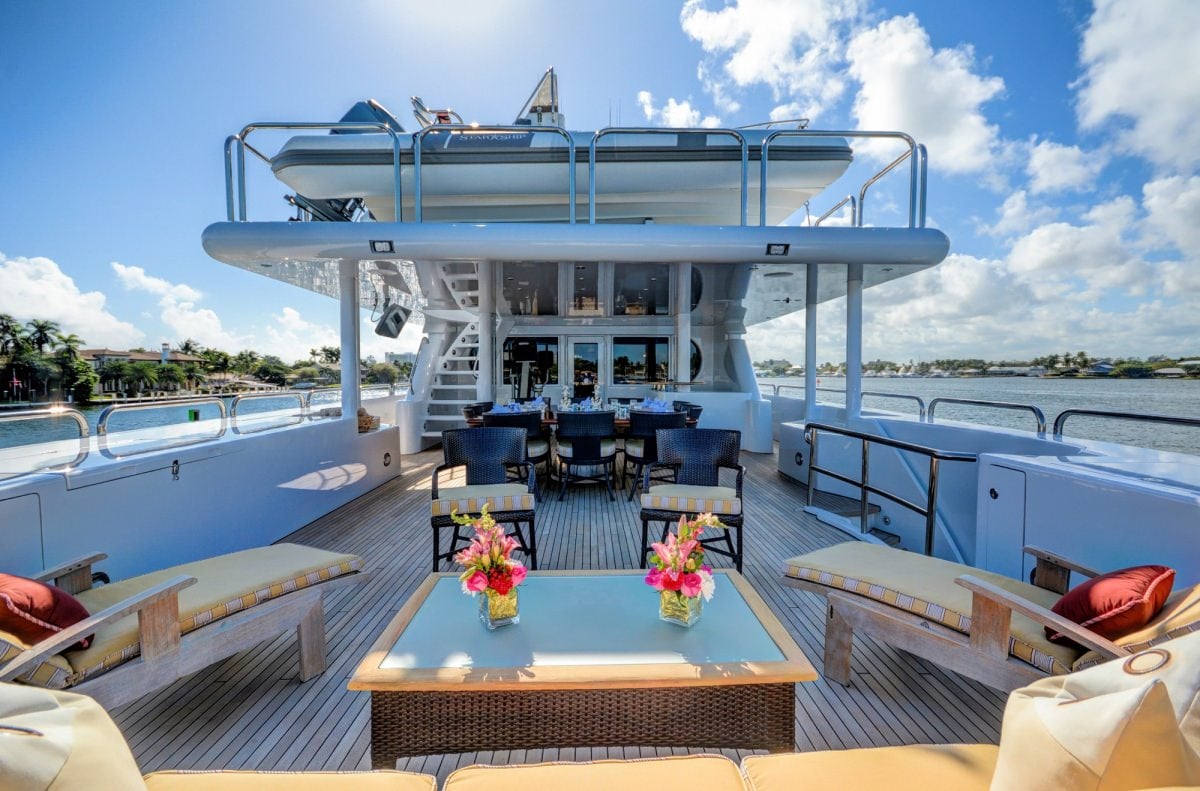 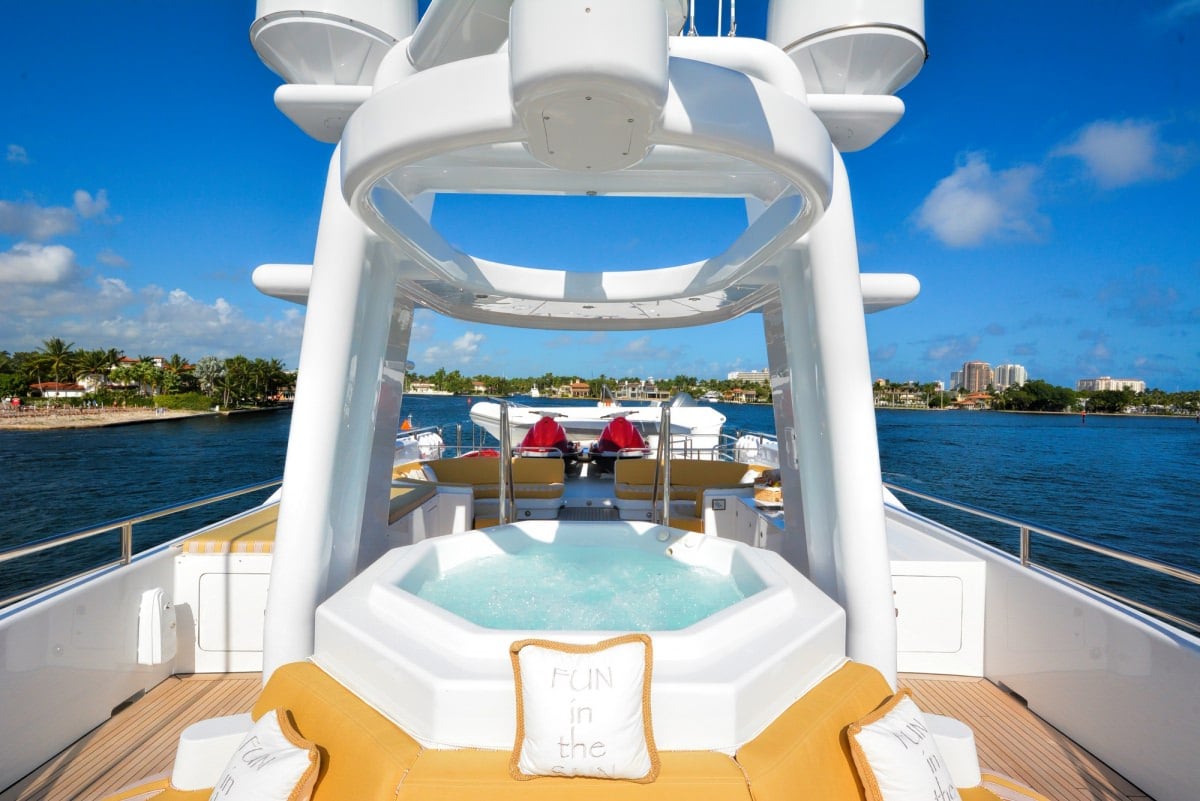 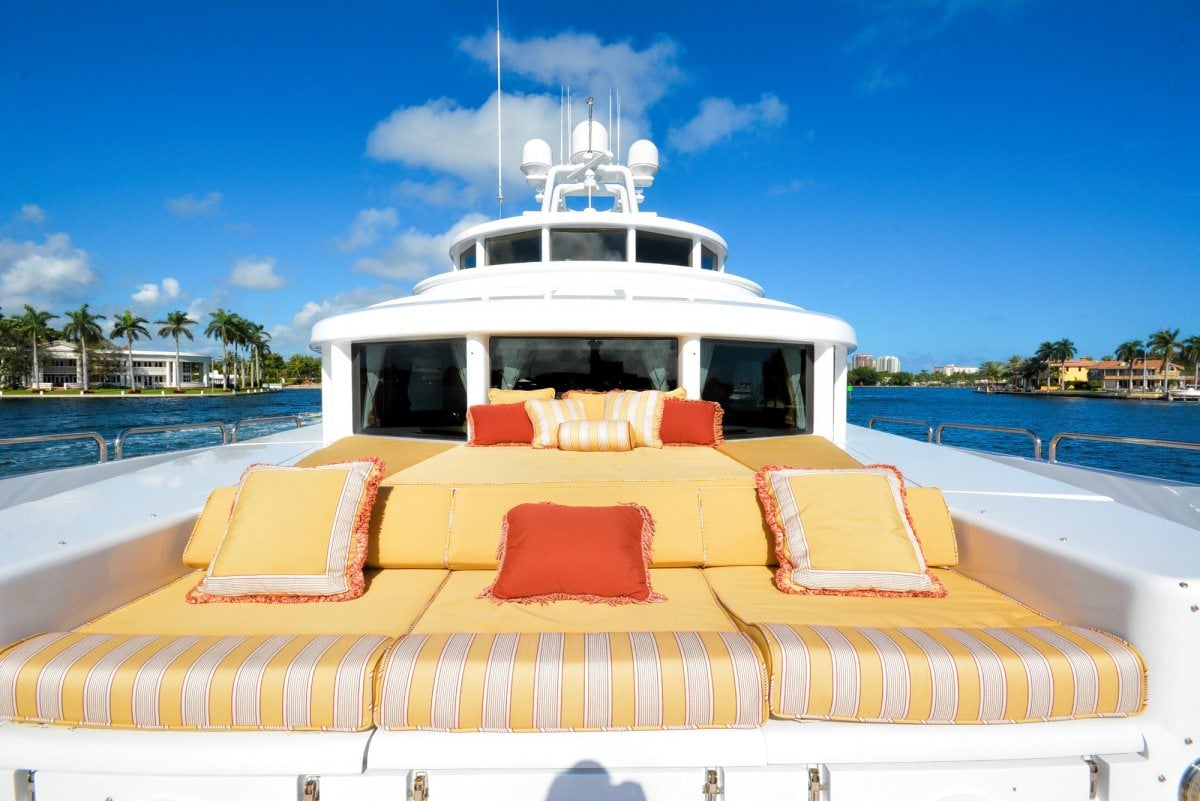 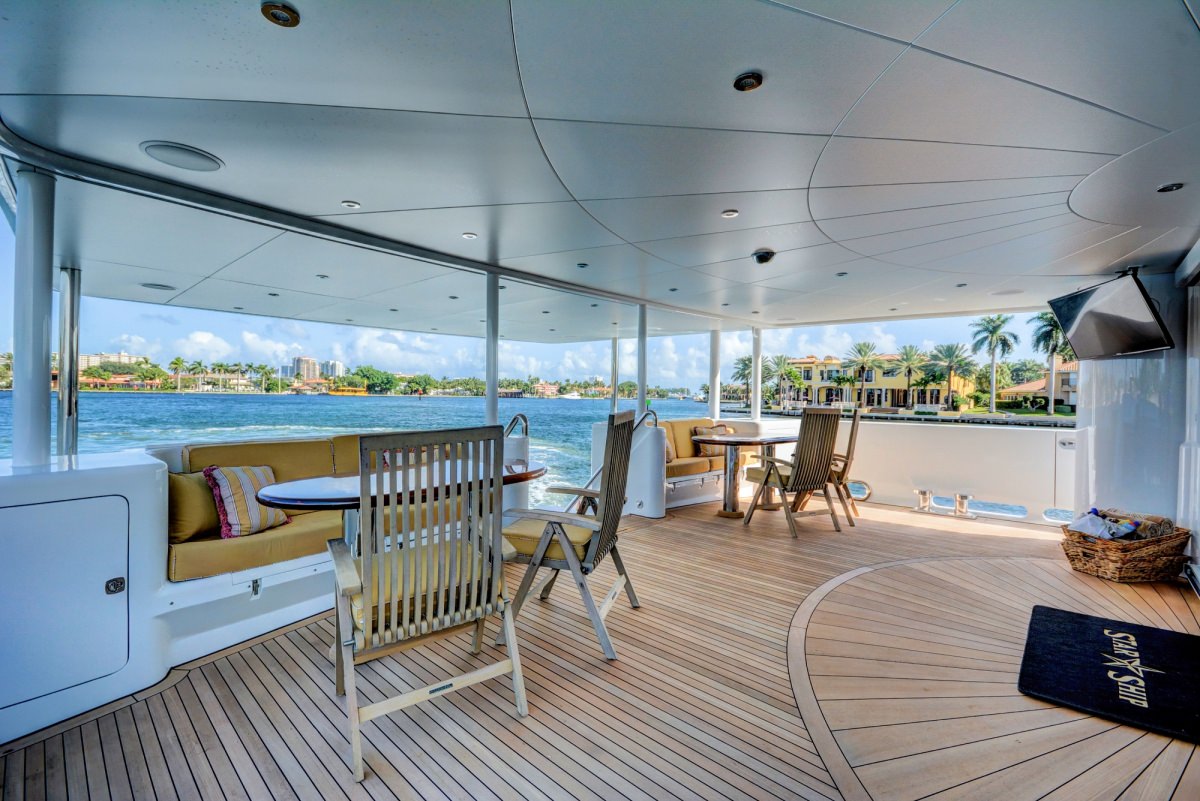 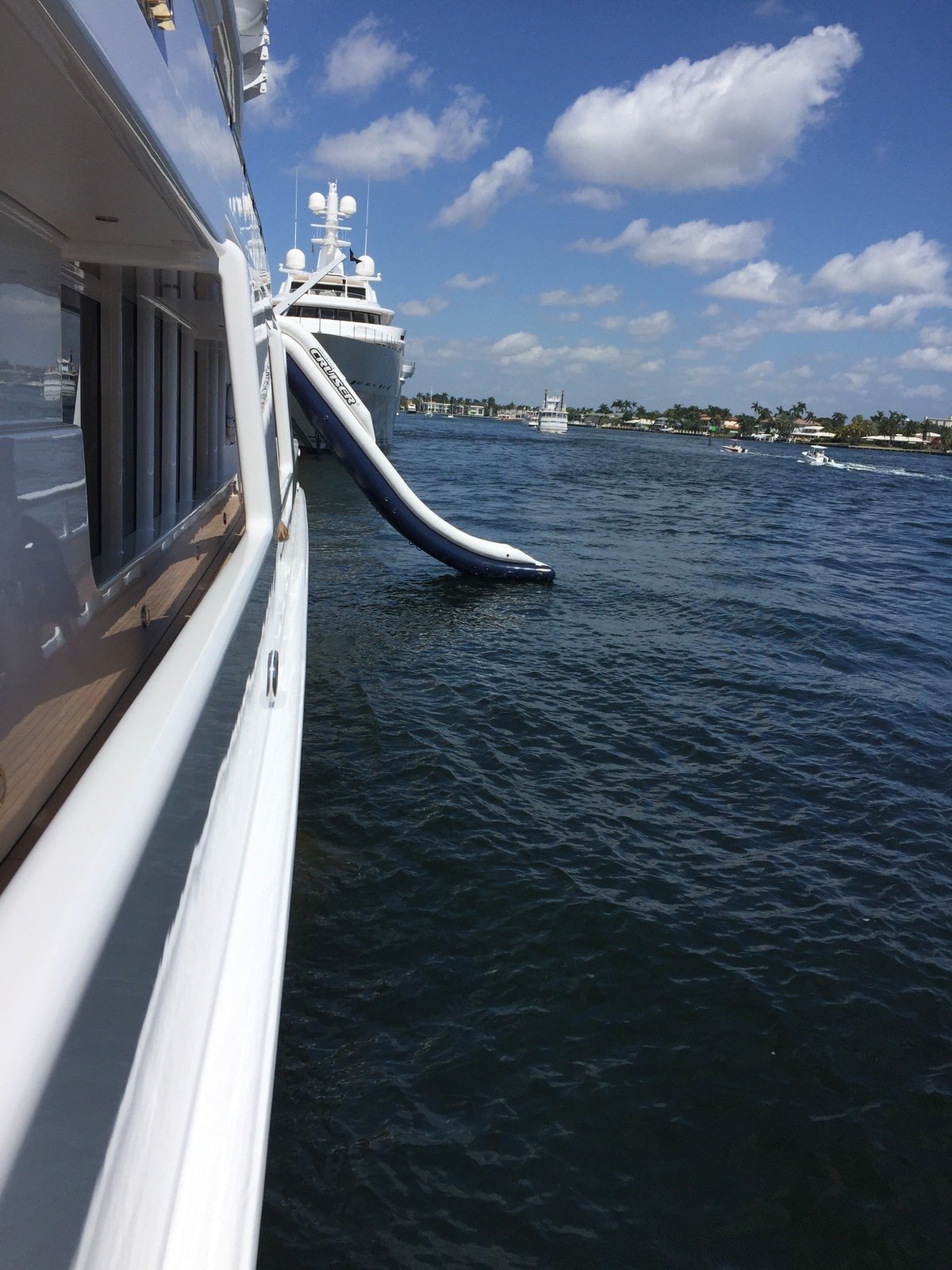 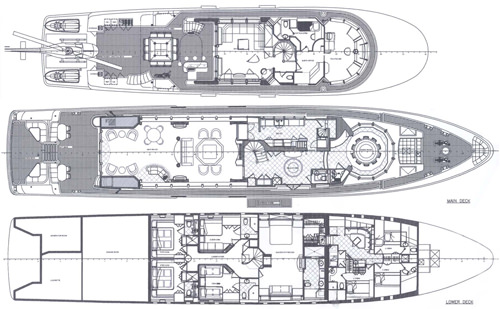 Starship’s major refit in 2004 and continued upgrades into 2017, have her showing like new. She sleeps twelve guests in 5 staterooms each with en-suite bath. There are also an additional 2 day heads for guest use. She is decorated throughout with rich mahogany wood, elegant marble finishes, fine art and elegant soft goods.

The side entrance welcomes guests into an impressive main foyer. The main salon is arranged with a full bar, two sitting areas, one area with a semi circular settee facing the 52″ flat screen TV and entertainment system, the next area with inviting sofa and oversized chairs, and the most aft to port set with a game table. The private formal dining is forward with a round table which comfortably seats 10. The fine china, detailed cabinetry and superb view forward provide an intimate and memorable dining experience.

The skylounge area is a great alternative for intimate cocktails and entertaining, or simply to escape to a quieter place for a bit of work at the desk or relaxation in the cozy sofa or chairs. The Master suite is located amidship on the lower deck and features a California King size bed, full seating area with sofa and chairs, large walk-in closets with dressing area and elegant en-suite marble accented bathroom with steam shower.

There are four additional staterooms aft of the Master including a Queen VIP with pullman and sofa bed, two mirrored guest staterooms set with King sized beds and a Twin guest stateroom to starboard. Each stateroom is ensuite with head and shower and fully equipped with flat screen TV, DVD and CD.

Aft of the skylounge is a large square al fresco dining table for 12 guests serviced by a full bar to starboard. Up one level to the flybridge deck, guests can enjoy the jacuzzi, plenty of comfortable sunning areas and seating, wet bar and surround sound music.

Captain Steve has been a resident of Florida for 20 years. He has been an avid boater for most of his life, his passion in his “Go Fast” boat spending many weekends with other boaters in central Florida. Captain Steve has been with StarShip since 2003 and has been working with the owner since 1997. Steve ensures that any charter or event will run smoothly from start to finish.

Jib is originally from Sudbury Canada, Then moved to Stuart Florida at the age of Seven. Where he developed a love for the ocean. Jibs yachting career has taken him all over the world most recently he spent the last three years in the south Pacific in such places as the remote areas of Papua new Guinea and Kapingamarangi.

Wayne was born in South Africa with ancestral roots in the UK and Italy, Wayne Grew up in Durban. Where he first began his culinary journey in the restaurant business. He then moved to the UK in 1991, and continued on his culinary adventure. Having spent a lot of time traveling around the world, food has always been at the top of his to do list.
Yachting has been a great combination for him. Wayne joined the high seas working on yachts in 2009 and has never looked back. Creativity is a specialty of Wayne’s, and he is happy to conjure up anything your palate desires, and cater to specific dietary requirements. With his mixed culture background you will find a fusion cuisine combining local ingredients with exotic flavors.

Abby was born in Wisconsin. She joined yachting right after high school. Abby quickly worked her way up the ranks, and has been a successful Chief Stewardess for over 10 years. Abby prides herself on ultimate guest satisfaction. Her favorite aspect of the job is meeting her new guests. Abby loves attending sporting events, in particular Football. Her team is the Green Bay Packers.

She has traveled extensively during her time in yachting, including the Caribbean, Mediterranean, Hawaii, Central America, and the US East Coast. Her favorite city is Charleston because of the unique of the city and her easy access to the water.

Nikki was born in Fort Lauderdale. Her love for the water started at a young age, when she spent a lot of her spare time on her dads’ boats. Nikki loves the outdoors, as well as fishing, but her enjoyment for people and her training with children encouraged her to become a stewardess. With her calm disposition, and eagerness to learn, she has quickly become a vital member of the crew.

Nikki is also a trapper for the Nuisance Alligator Trapper Program, for the State of Florida, and provides much amusement to our guests when explaining her line of ‘community service.’

Scott is from Mount Dora, Florida. He was a competitive swimmer throughout his youth. Enjoying the beaches and lakes surrounding his childhood home, he naturally molded his hobbies around the water. He spent much of his leisure time fishing, diving, and boating. Scott spent four years in the US Coast Guard as a coxswain at small boat stations before finding himself working on Motor Yachts. His time in the yachting industry has brought him to the Caribbean, Bahamas, Mediterranean, Central America, Mexico, zores, Madeira, and The Canary Islands. Scott has 5 years of yachting experience including Motor Yacht Huntress 180′, Motor Yacht Serengeti 130′ , and Motor Yacht Temptation 123’.

Alex was born in New York, and grew up in Namibia. At 21, he decided to move back to the United States. This is his first time away from home, but adapted very well to life here after he discovered yachting. Alex has his Skippers license, allowing him to drive smaller tenders, and he is eagerly awaiting for the sea time that will allow him to take his Yacht masters. Alex loves water sports, is an avid kite boarded. He takes any opportunity to get into the water, making him a perfect addition to the deck team. Alex is also fantastic with children.

Nick was born and raised in South Florida where he found a passion for watersports and the ocean.

Nick has been in the yachting industry for two years with time spent on the east coast of the united states and the Mediterranean.