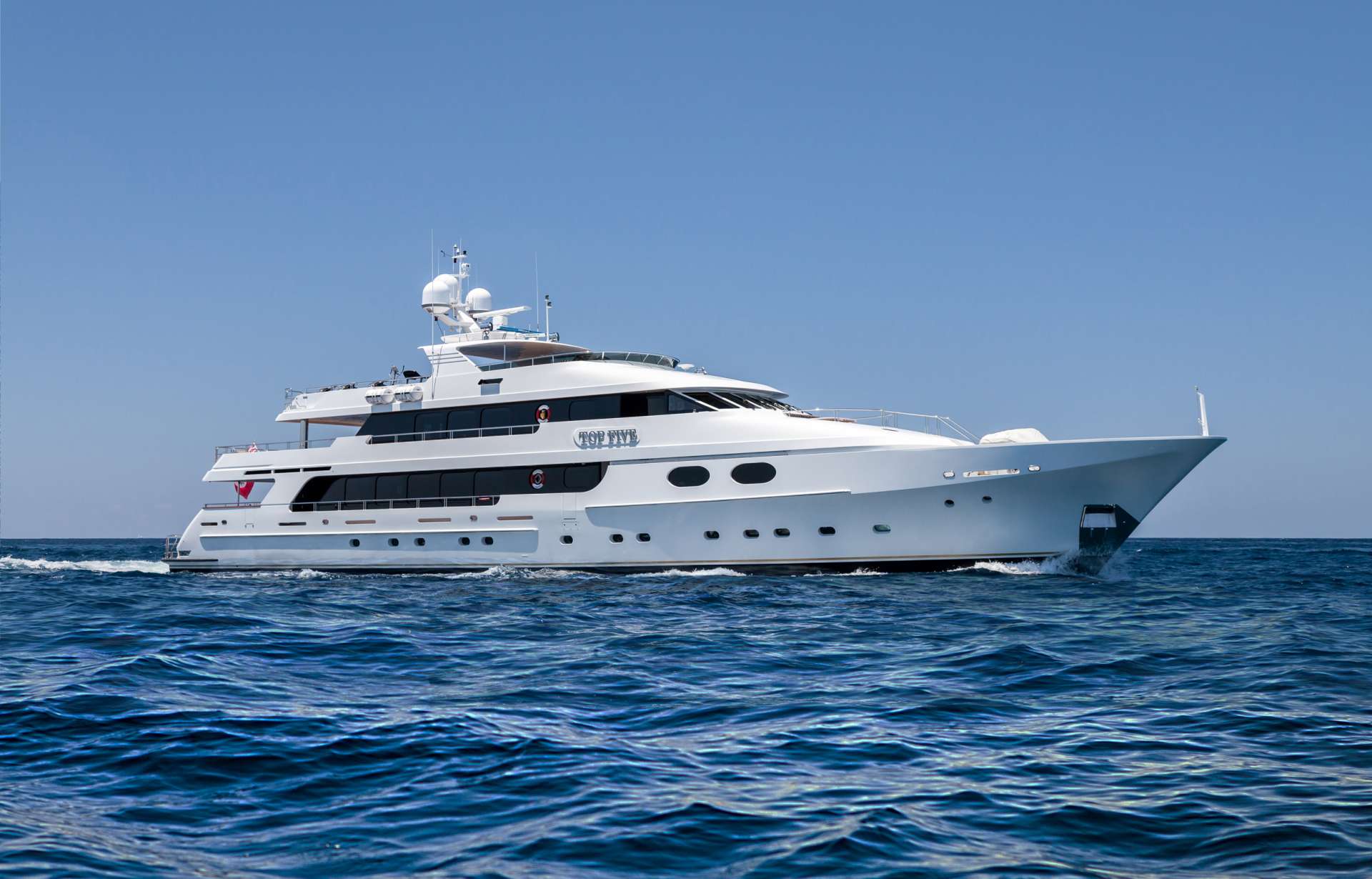 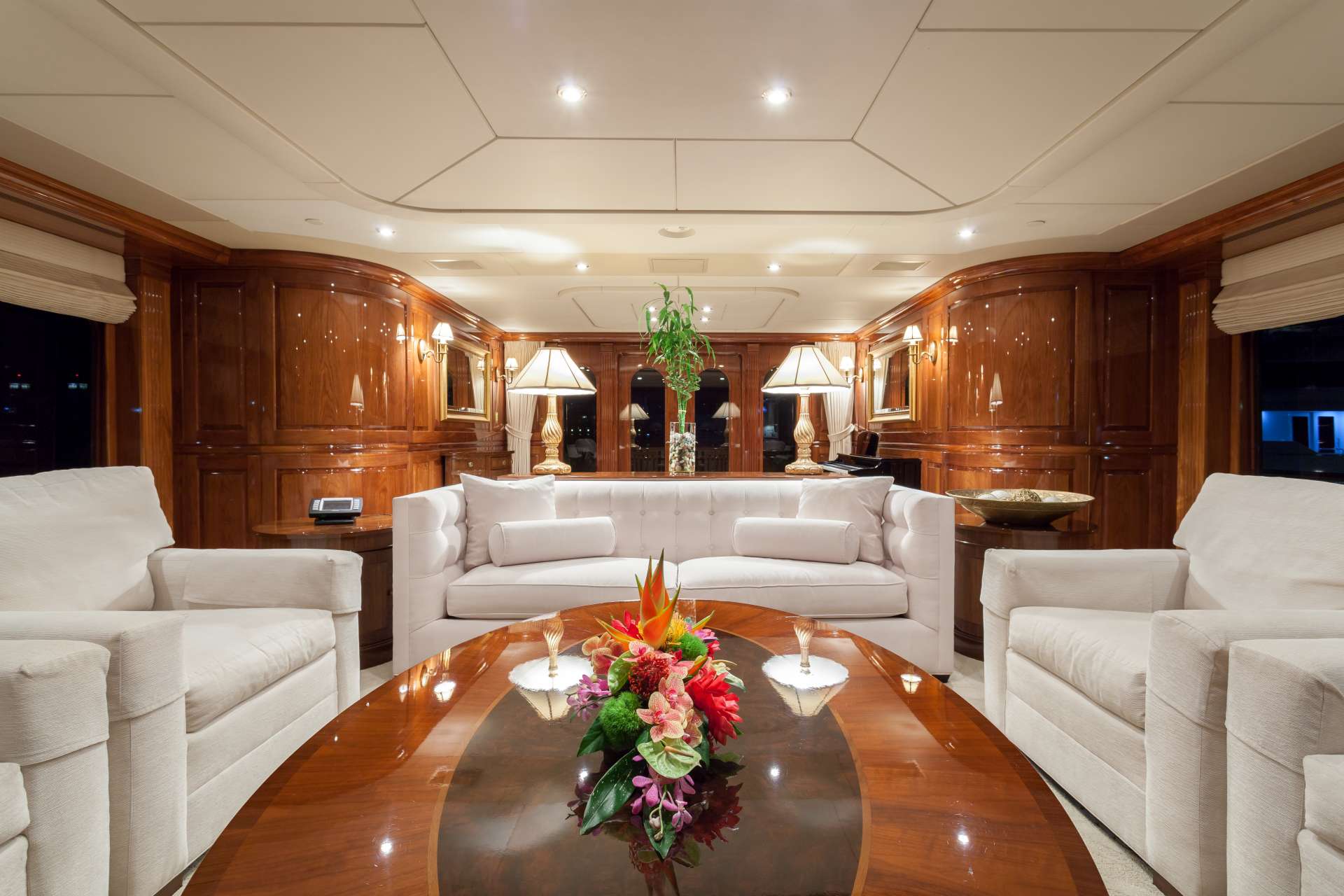 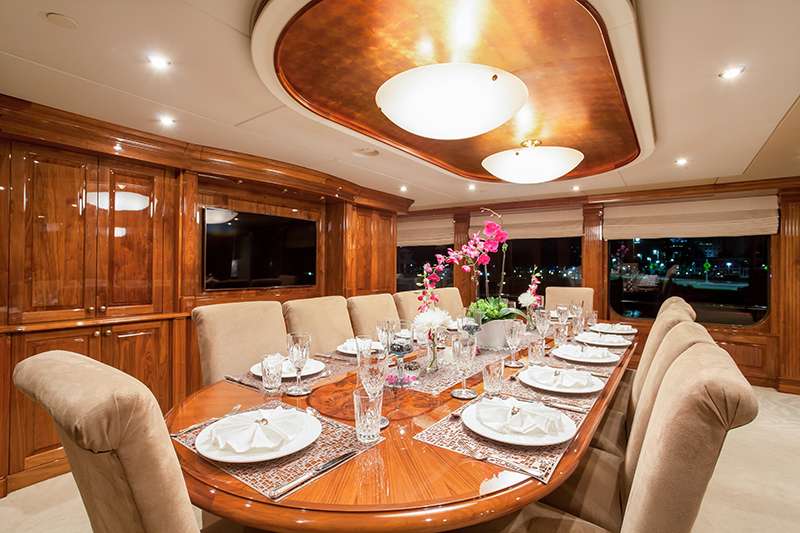 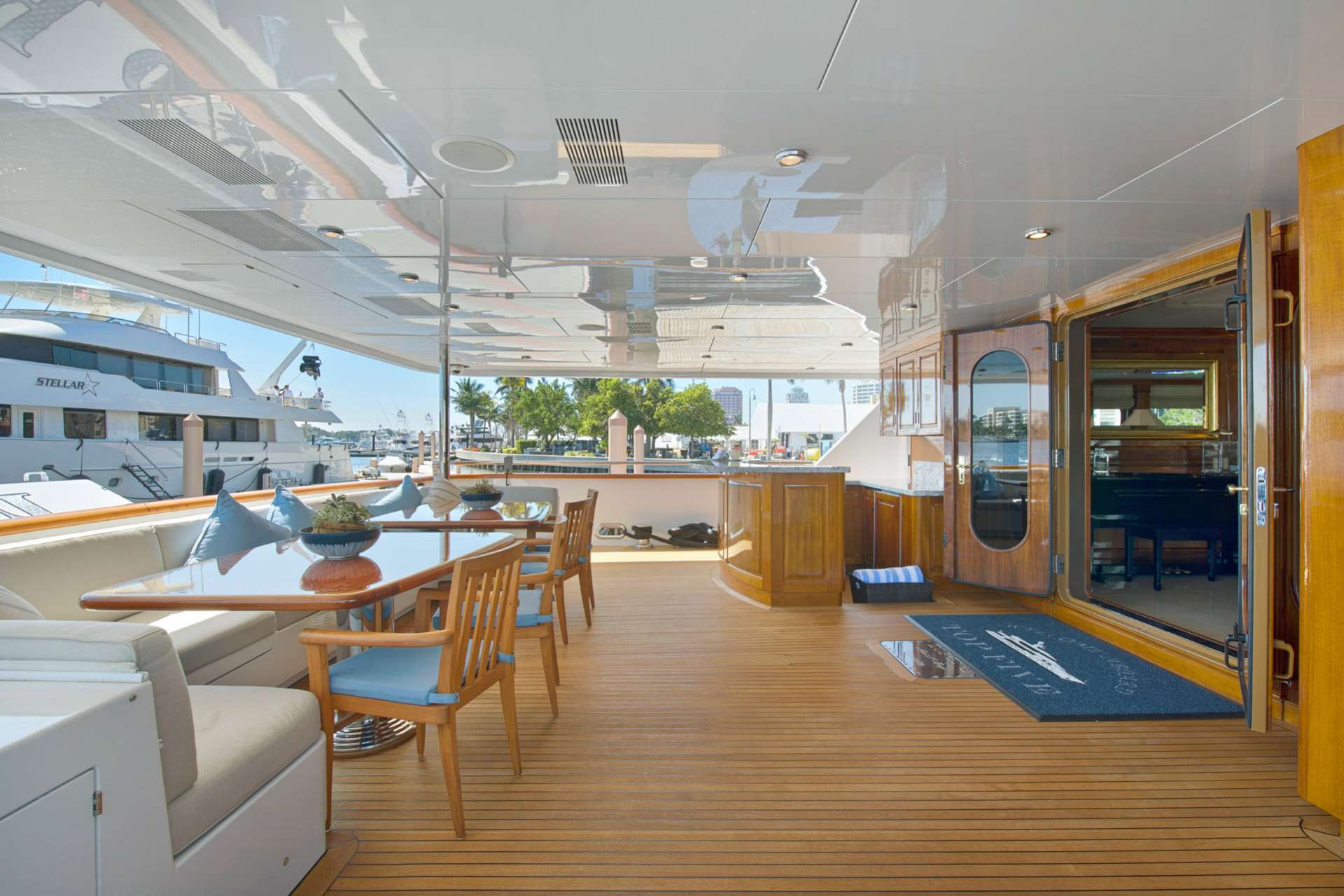 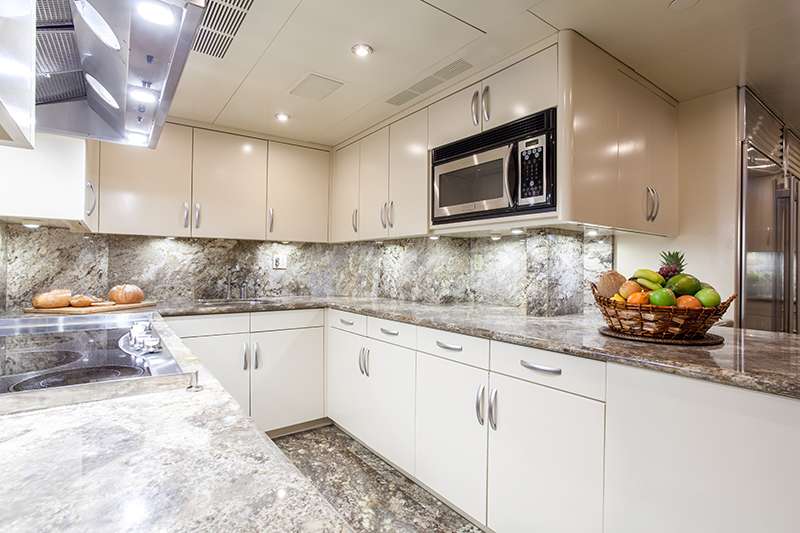 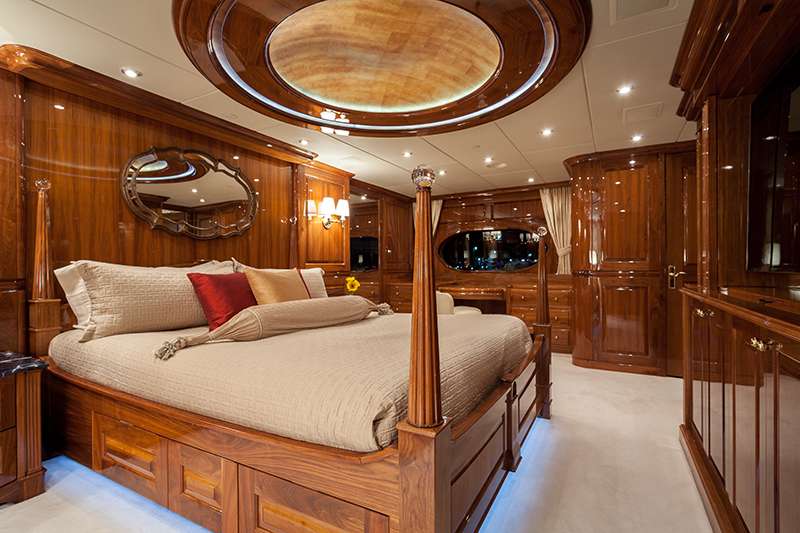 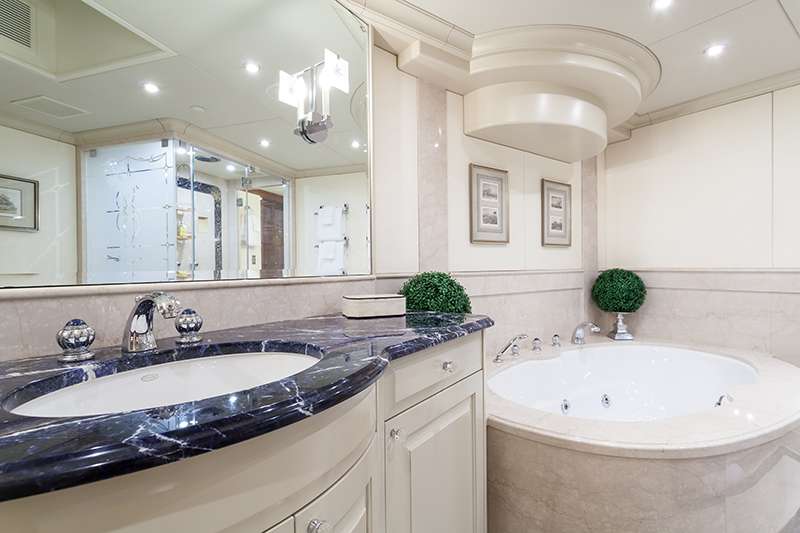 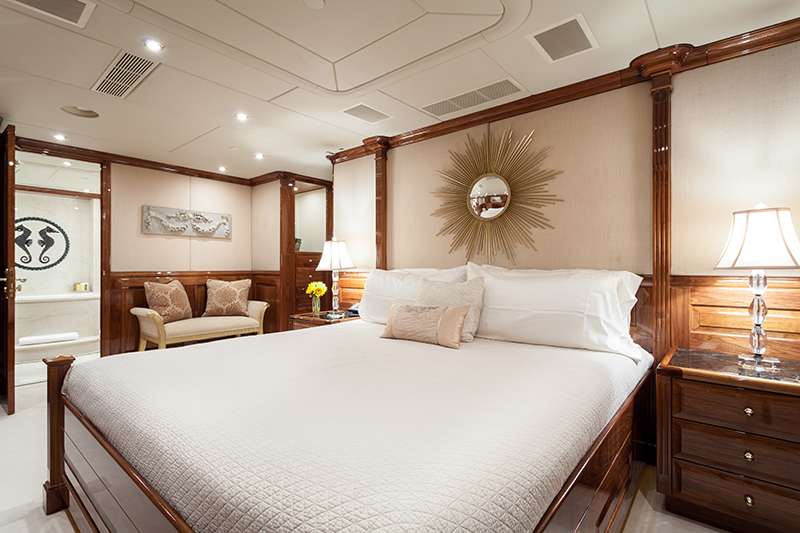 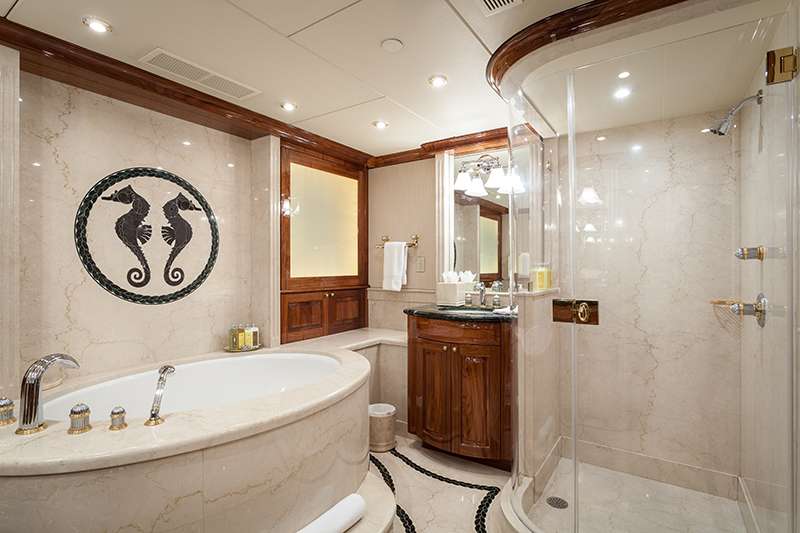 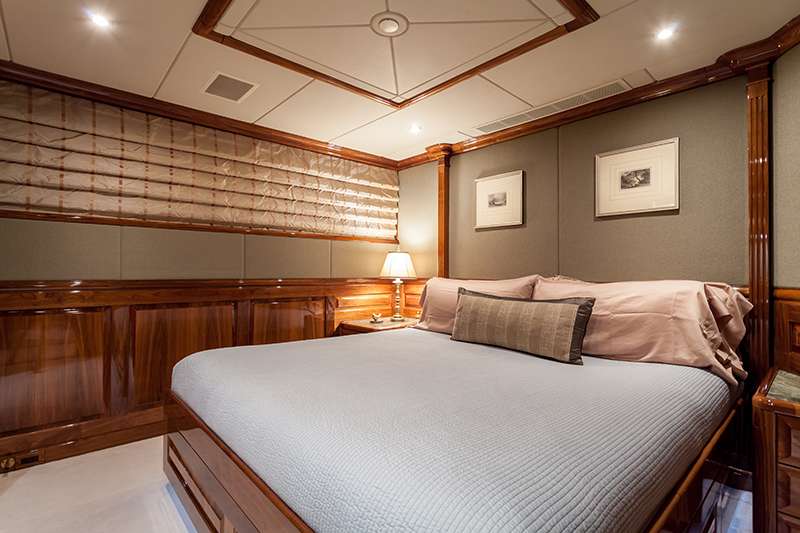 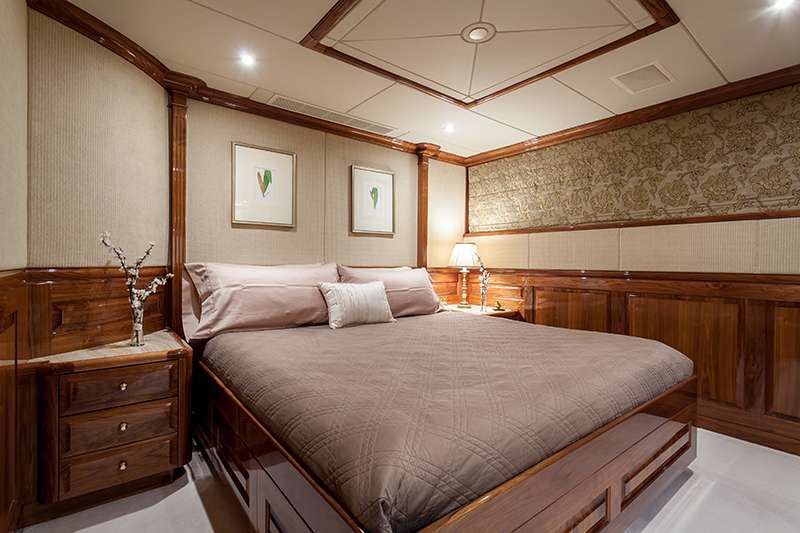 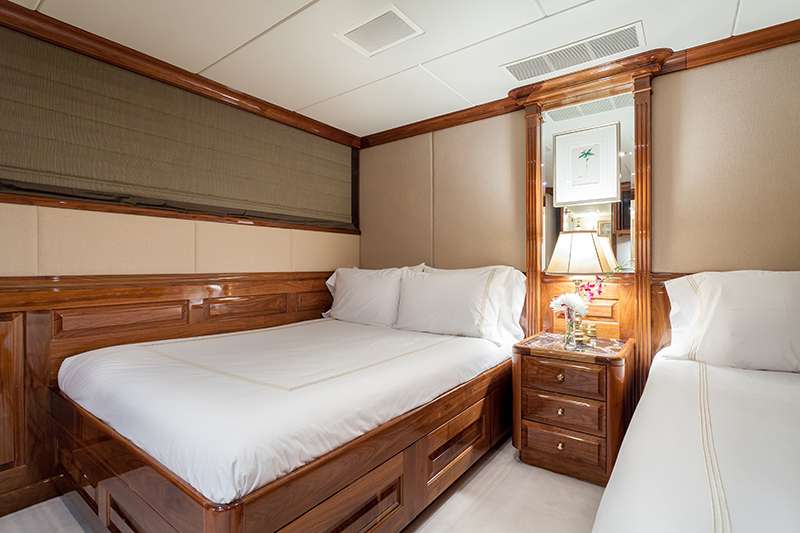 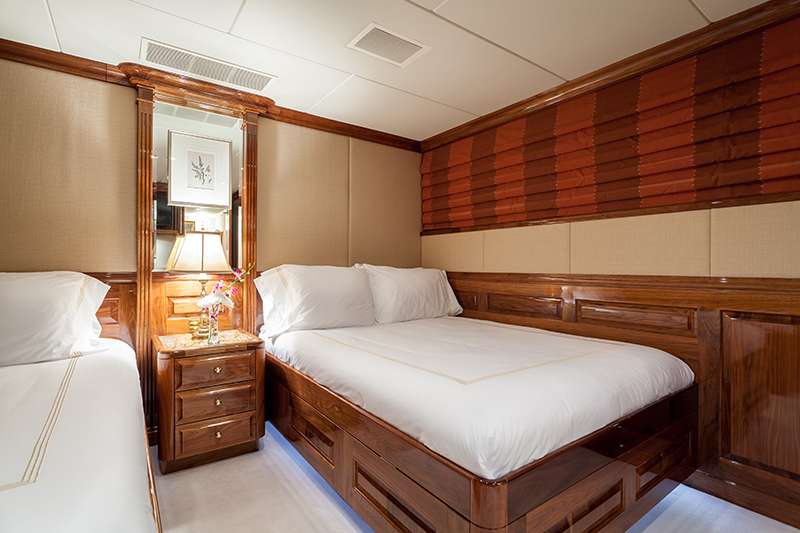 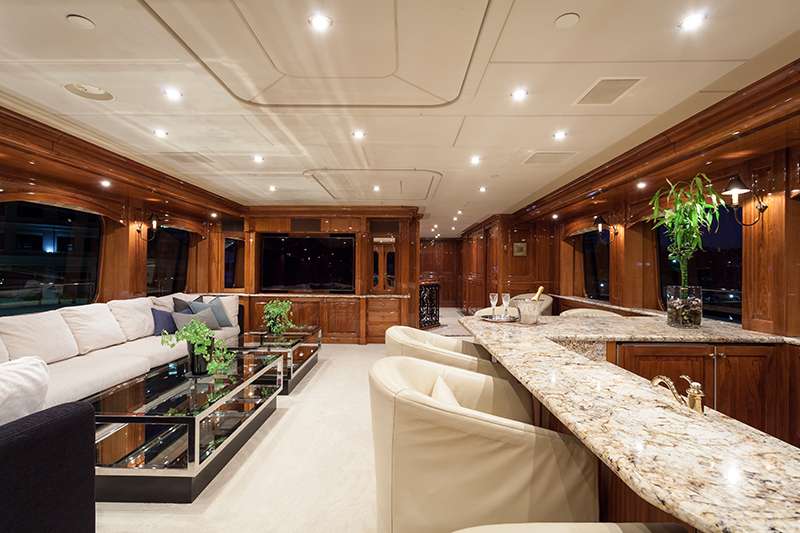 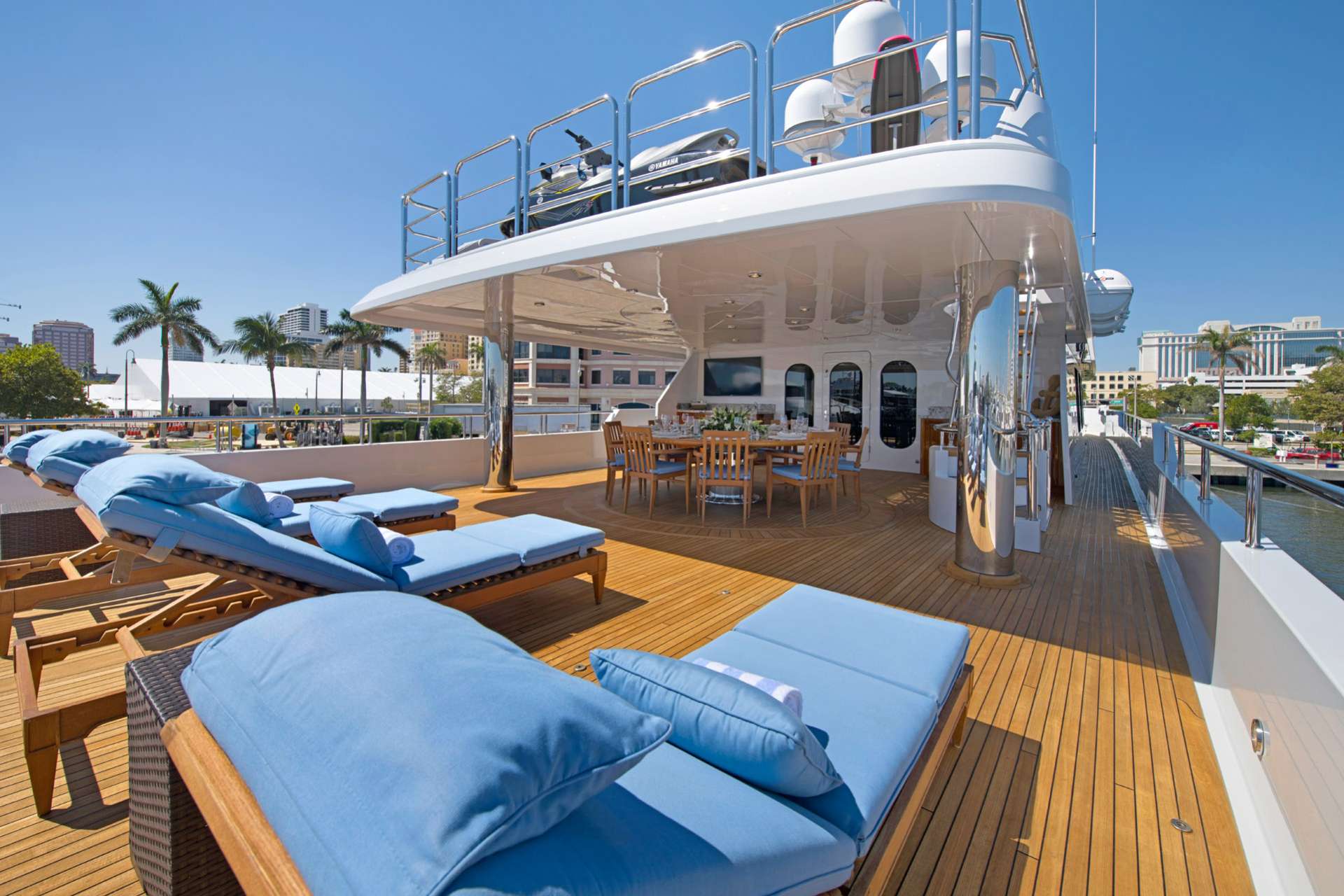 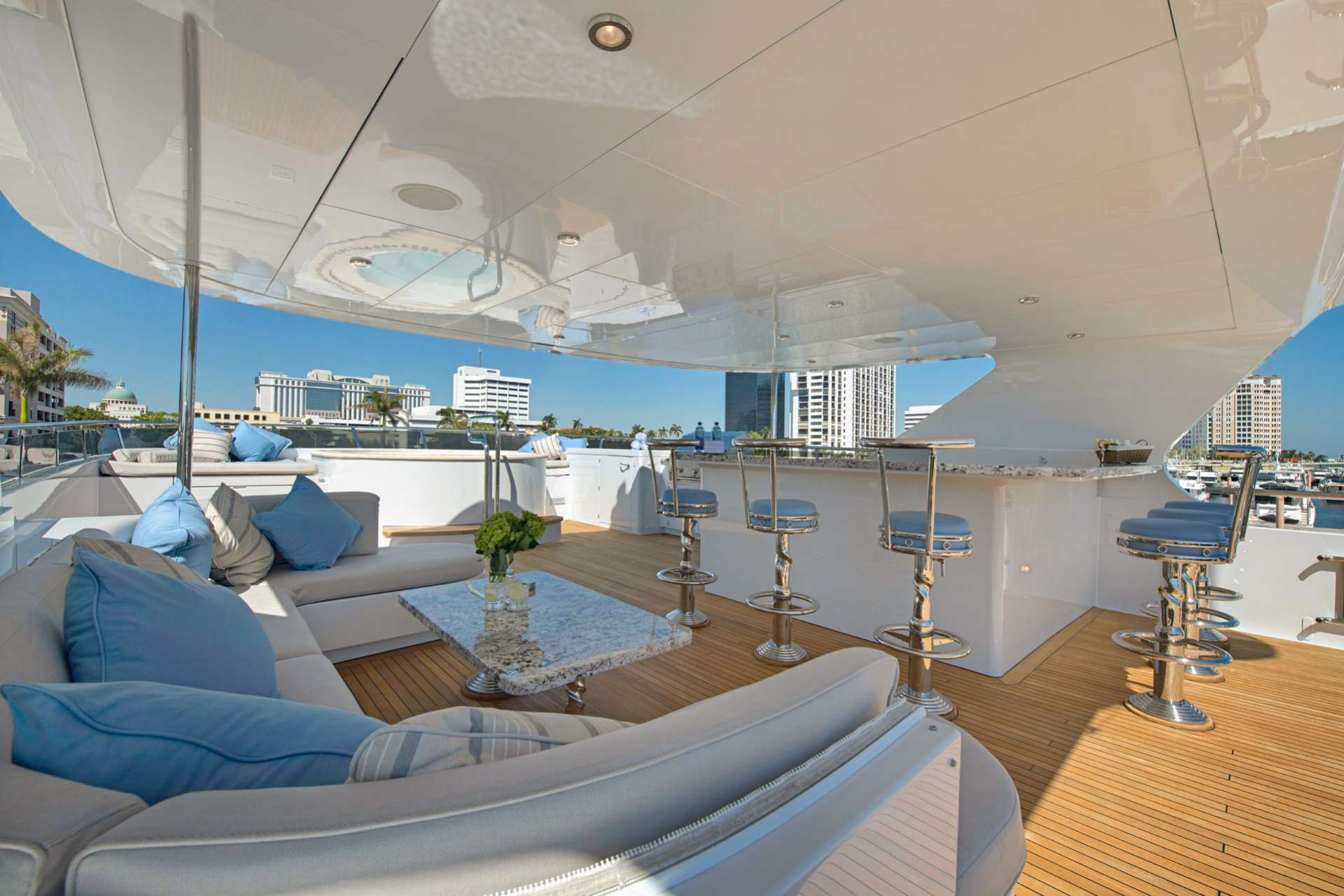 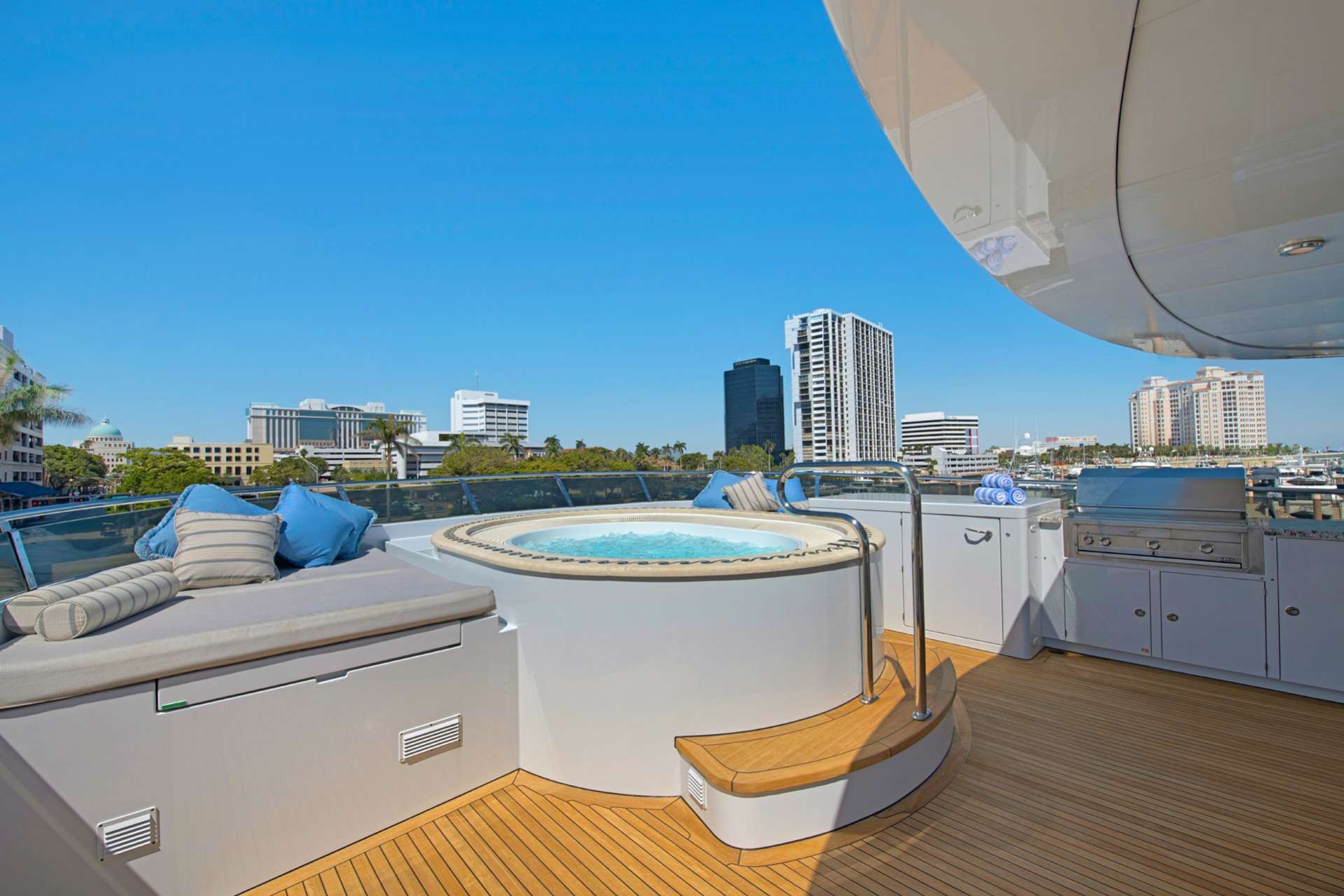 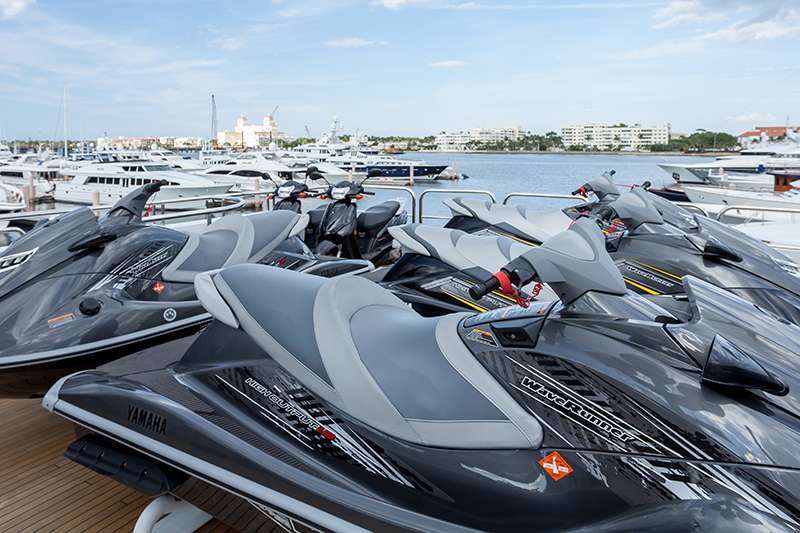 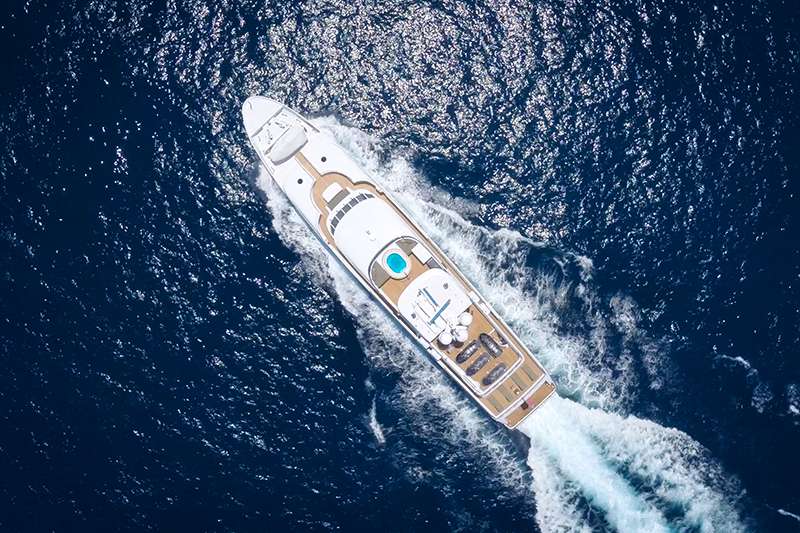 TOP FIVE epitomizes luxury and attention to detail throughout. Her aft deck provides shaded comfort for relaxing, an informal meal or simply enjoying the surroundings. As you enter the main salon, you immediately note her large windows that provide unobstructed views and a bright open feeling ideal for entertaining guests, enjoying an intimate conversation, or watching TV or a movie.

The main salon flows with ease into a spacious well-appointed dining salon with ample seating for 12, perfect for those wishing to dine in style. The lower aft deck is equipped with air conditioning for comfortable outdoor dining at the tables. The aft deck has a round table that seats 12 with a lazy susan.

Forward on the main deck, is the master suite, accessed from the main deck foyer, you pass through your private study and into the full-beam stateroom with his and her baths. Her spacious bath features a marble Jacuzzi tub and separate shower. There is a king-sized bed, large walk-in his and hers wardrobes and entertainment center.

On the lower deck, there are five luxurious staterooms. The full beam VIP stateroom features a large bath complete with tub. There are two equal queen-size staterooms, two double staterooms forward are each fitted with a full size and a twin berth as well as a Pullman, making them ideal family cabins. All staterooms have en-suite baths and entertainment centers.

Whether you arrive at the bridge deck via the exquisite curved staircase, or use her 4-deck elevator located off the foyer, the feeling of understated elegance and comfort is the same, complete with large screen entertainment center, a cozy sunken bar and ample seating. Al fresco dining is at its best on the aft bridge deck. This spacious private area accommodates 12 guests.

The sun deck is designed as an entertainers dream, including a spa pool surrounded by sun beds. The shaded settee curves around a cocktail table and the cocktail bar has seating for six. The expansive open space of the sun deck is perfect for an afternoon or evening party.

JOHANNES BUYS | Captain | South Africa
Joe is the longest serving crew member with close to fifteen years on board Top Five.Captain Joe was brought up on a farm in the Free State and he was drawn to the alternative lifestyle of yachting. In 1996, he began his career with a focus on engineering – it wasn’t until 2002 that he made the transition to Captain. A natural at navigation, mechanics and good seamanship, Joe flourished in his career with his hard work and dedication to the industry. He holds a MCA Y3 Engineer License, a Dive Master (PADI) and his Master Y4 3000 GT MCA Captain’s License. He has extensively travelled the Caribbean, Mediterranean, Bahamian and Americas. Joe holds enthusiasm and commitment to ensuring his guests have an unforgettable and safe experience on board Top Five. Joe has three beautiful daughters and resides in Canada in his off time.

FANTA SCHRAGE | First Mate | South Africa
Fanta was born and raised in Hartswater, South Africa. Coming from a farming background, Fanta found his way into yachting in 2001. He currently holds his MCA First Officer Unlimited, but is in the process of completing his Master 3000. Amongst the travel, Fanta fell in love with an American woman whom he later married. They now reside in West Palm Beach and have a handsome baby boy.

STEPHANUS du PLESSIS | Chief Engineer | South Africa
Born in the small town and farming community of Heilbron, Stef grew up working closely with the land. An avid animal lover, he always imagined himself becoming a vet. However as time passed, he began to work with various machinery on the farm and found that it was engines that truly intrigued him. It wasn’t long before the engineering industry consumed him completely. He travelled across the world to the United Kingdom where he obtained his Y3 Chief Engineer License, allowing him to travel further while pursuing his passion. Stef has a calm and collected nature which allows him to thrive in high-pressure situations. You’ll most likely find him in the engine room, ensuring everything is in perfect working order. Stef offers a wealth of knowledge as well as engine room tours. Stef lives in sunny West Palm with his wife and their two dogs.

BRADLEY DAVID | Chef | Canada
This man here has been a member of Top Five since 2010. Born in Toronto, Bradley has been drawn to cooking since the age of twelve. In order to further his culinary ambitions, Brad went to Ottowa where he was given the opportunity of Sous Chef. He later obtained his culinary degree & Canadian Red Seal Chef License. In 2008, Brad began to pursue a career in the yachting industry. After seven years, he took a little break from yacht life to travel the world to twenty-five different countries,
absorbing the culture and learning new and authentic cuisines. For any guest, Bradley can prepare a wide range of foods from Kosher, to Mediterranean to Asian. He welcomes you into the galley to share your requests.

EMILY WILENSKY | Chief Stewardess | United States
Emily grew up primarily in the seaside town of Jupiter, Florida and spent the summers at her family’s property in Southern Maine. She took her first steps on her family’s Sportfish and naturally developed sea legs and a love for the big ocean blue. Yachting was a natural course for Emily as her father was a yacht broker, step-father a Captain, and her mother a corporate spa director. In her early yachting days (2011), Emily was fortunate to spend nearly two years under an established Chief Stew to whom she later became the protégé. After this experience, she was ready to climb the ranks. Her passion for hospitality has grown and her nurturing instincts place her perfectly in a position to take care of crew and guests alike. Alongside service, Emily is a (RYT) 200hr Certified Yoga Teacher and his overjoyed to bring her passion for movement to you on board. In her free time, she happily resides in West Palm Beach, immersed in the community of yoga & wellness. You will always find her black lab, Arlo, not too far from her side.

TAYLER ANDREW | Bosun | South Africa
Born on the coast of Durban, South Africa, Tayler has always been naturally drawn to the ocean, spending most of his free time in it or sailing on top. After Tayler completed high school, he spent seventeen years in the UK. There he obtained a degree in architecture. It wasn’t until 2008 that he came into yachting. Tayler now holds his Yachtmaster 200 and AEC. He has had the pleasure of sailing the Americas, the Bahamas and Caribbean Sea, the Mediterranean and SE Asia. Outside of work, Tayler enjoys fruitful projects; he is currently working on building a sustainable home in Panama and investing his time and mind into the farmland there.

ROCHELLE VAN ROOYEN | Second Stewardess | South Africa
Rochelle was born in South Africa and raised on her family’s catamaran, circumnavigating the world where life revolved around sunrises and sunsets
of ocean life. A natural passion for the sea evolved in this miraculous upbringing. She has been surfing from an early age and enjoys wake-boarding, river rafting,
diving and experimenting in other extreme sports. As soon as she finished studying Film and TV Production, she decided to pursue a career in yachting; an organic fit for her love of the ocean, travel and outdoors. A few years later, she continues to thrive within the industry.

HILARY SZYDLOWSKI | Stewardess | United States
Hilary is our newest addition to the Top Five Team. She was raised in Michigan, where she completed her degree in E-Business Marketing. It wasn’t long before she grew tired of a standard office job and began seeking a little something extra. For 2018, Hilary made a New Years’ resolution to build on a new chapter of life: yachting. It was fate when Emily scooped her up a mere two weeks after her safety courses were complete and we are so grateful. Hilary has a bright-eyed smile and her laughter brings light to the boat. When not at work, you can find her water skiing, wake-boarding, snowboarding, or SUP-ing | basically anything to do a board and a little adventure!