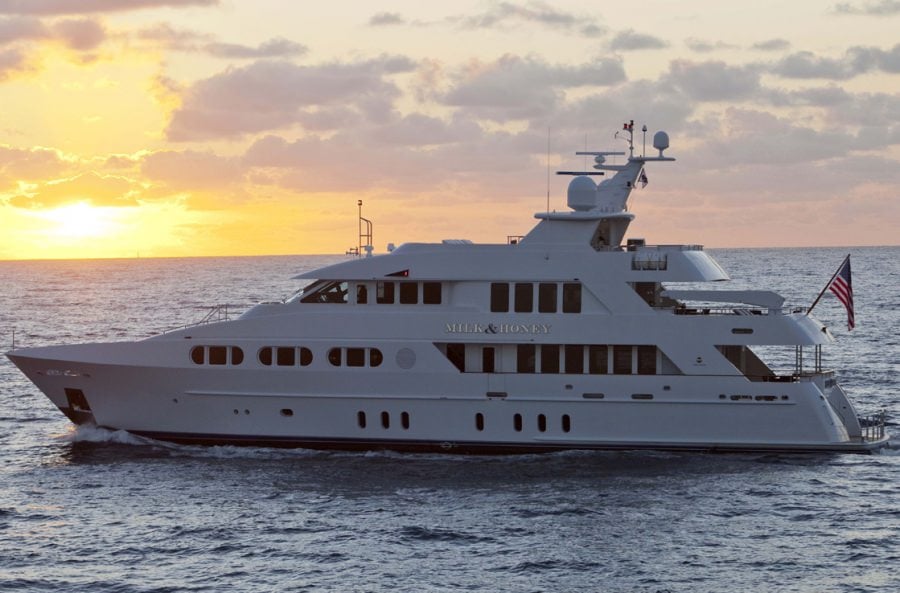 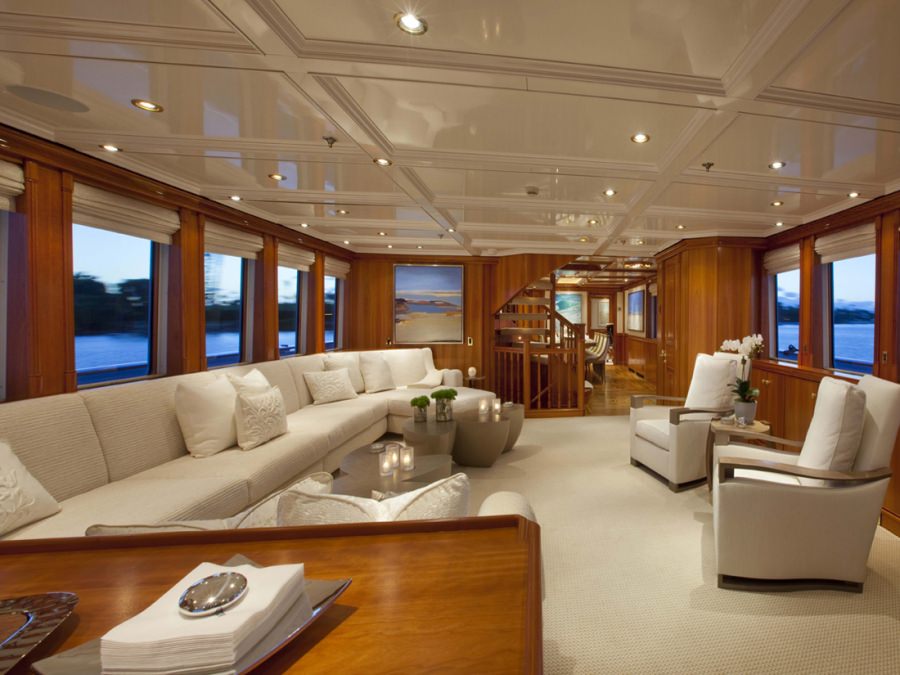 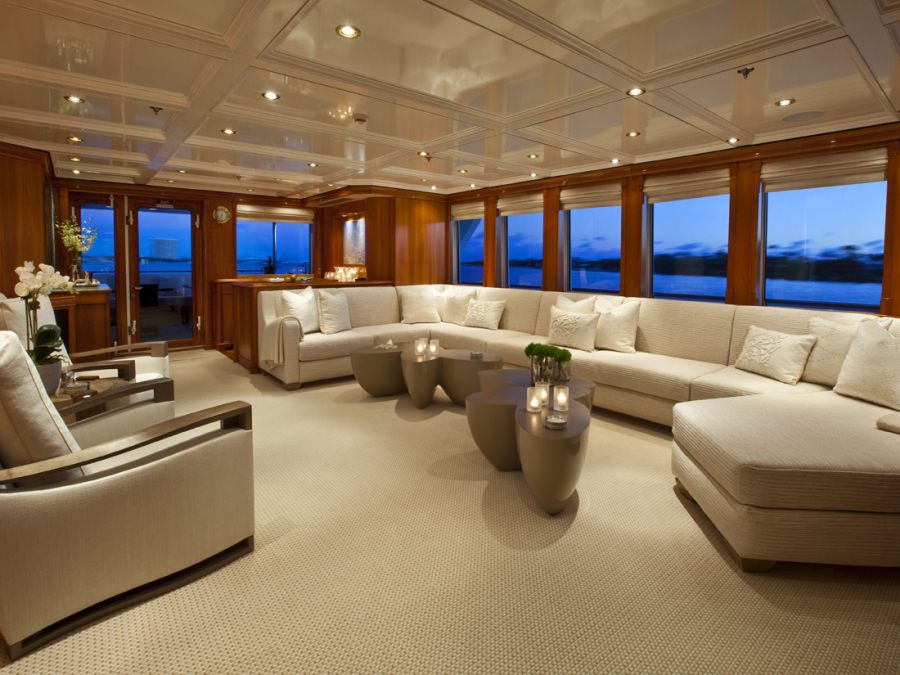 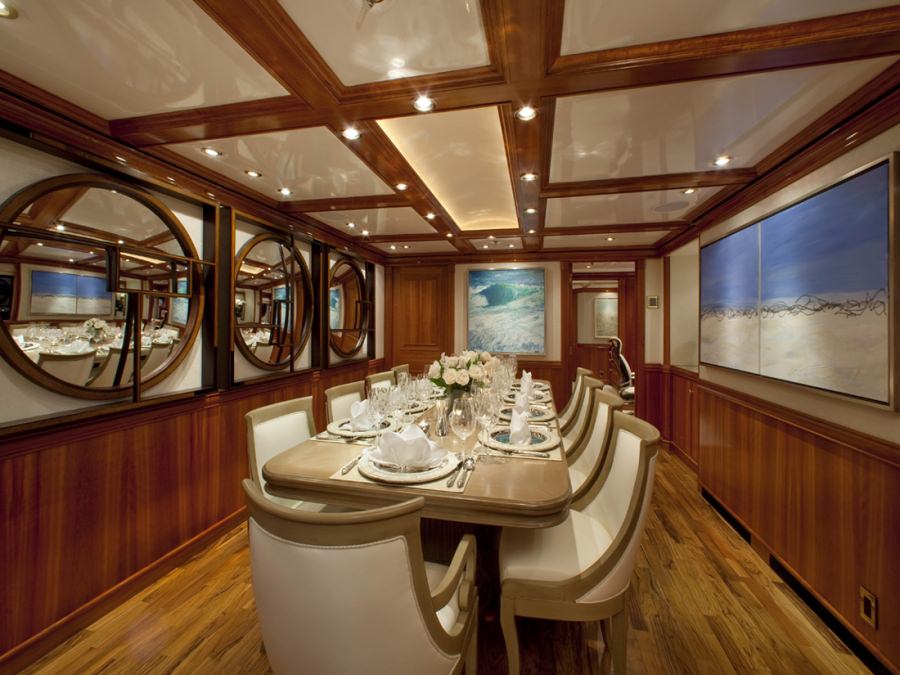 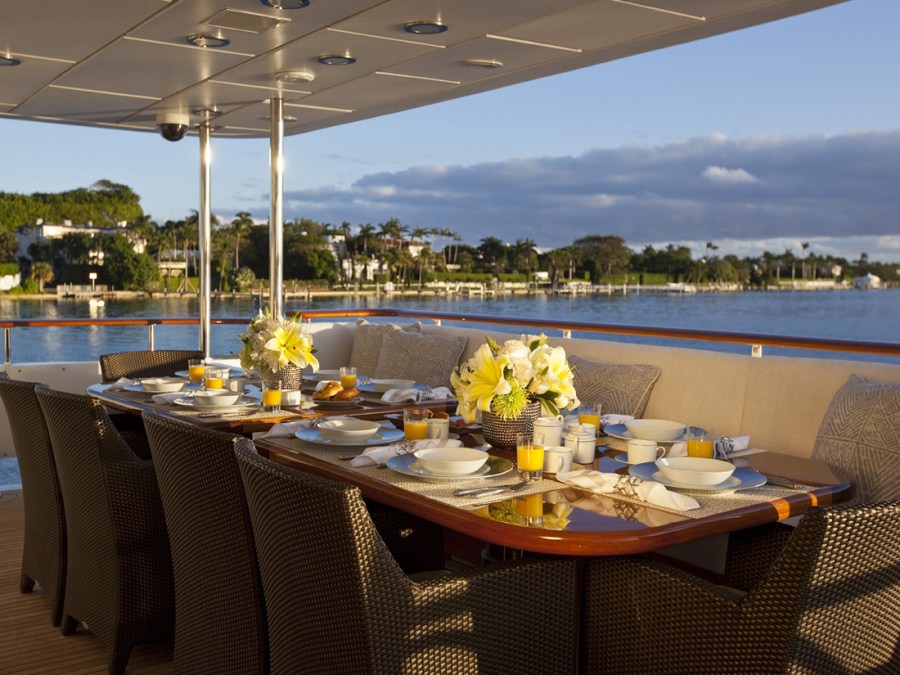 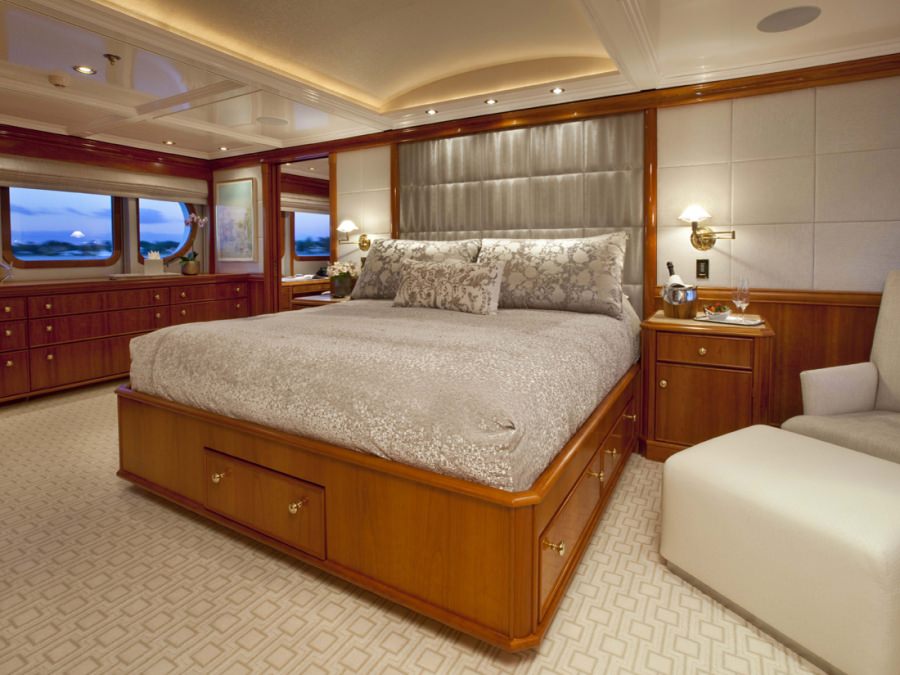 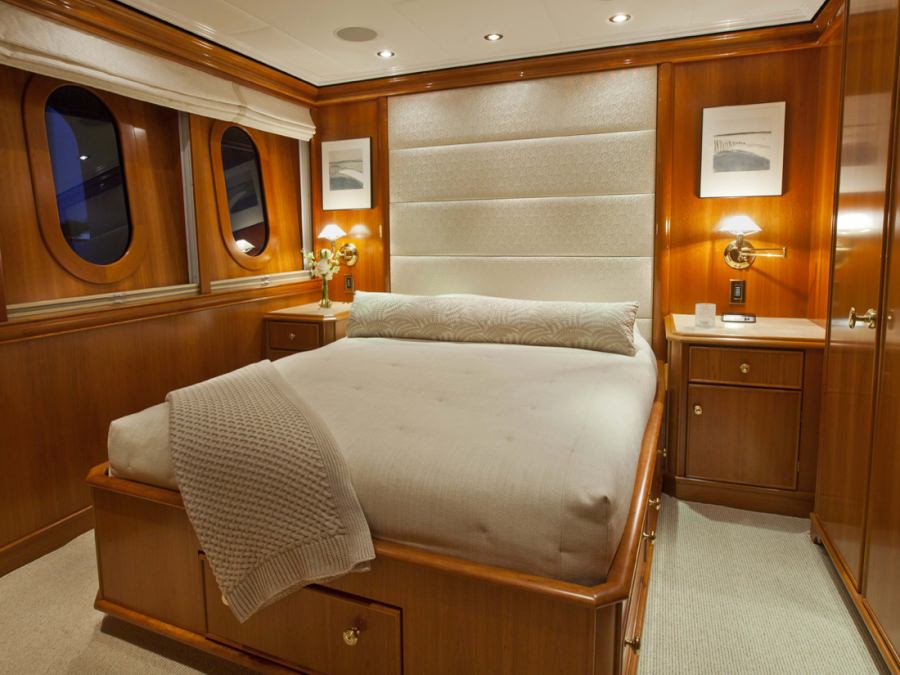 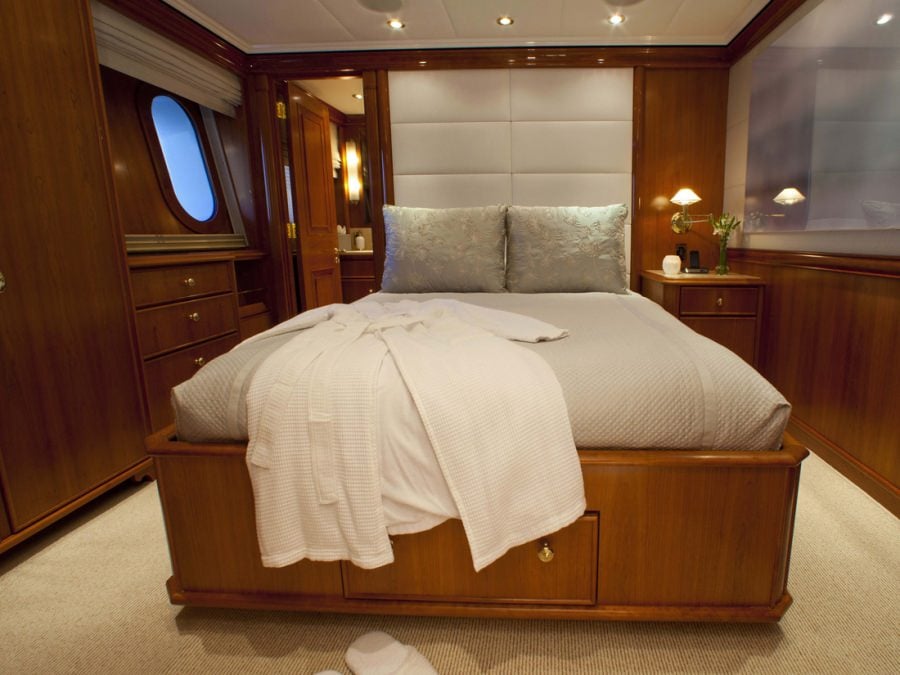 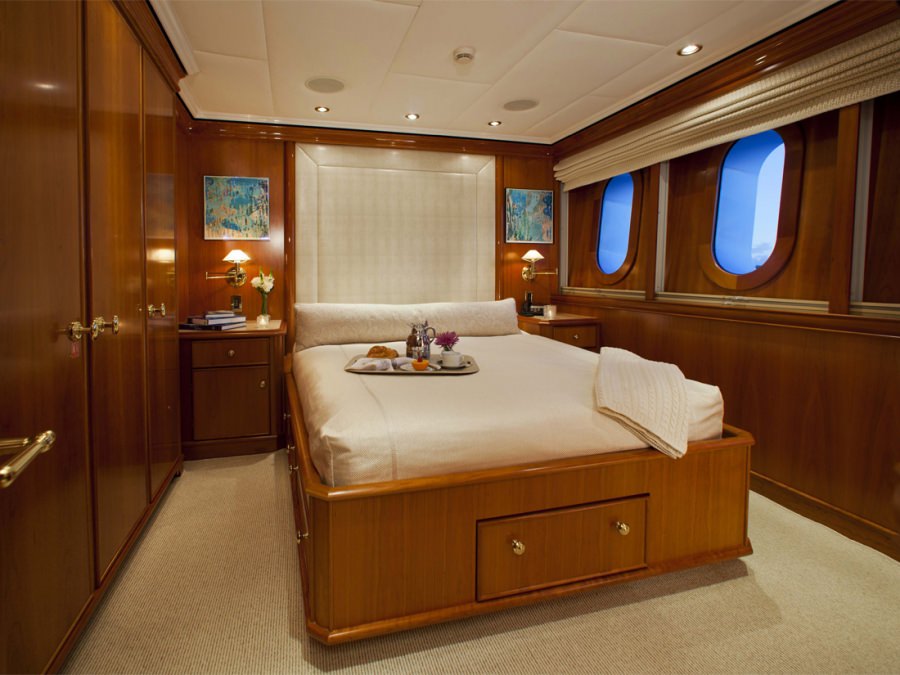 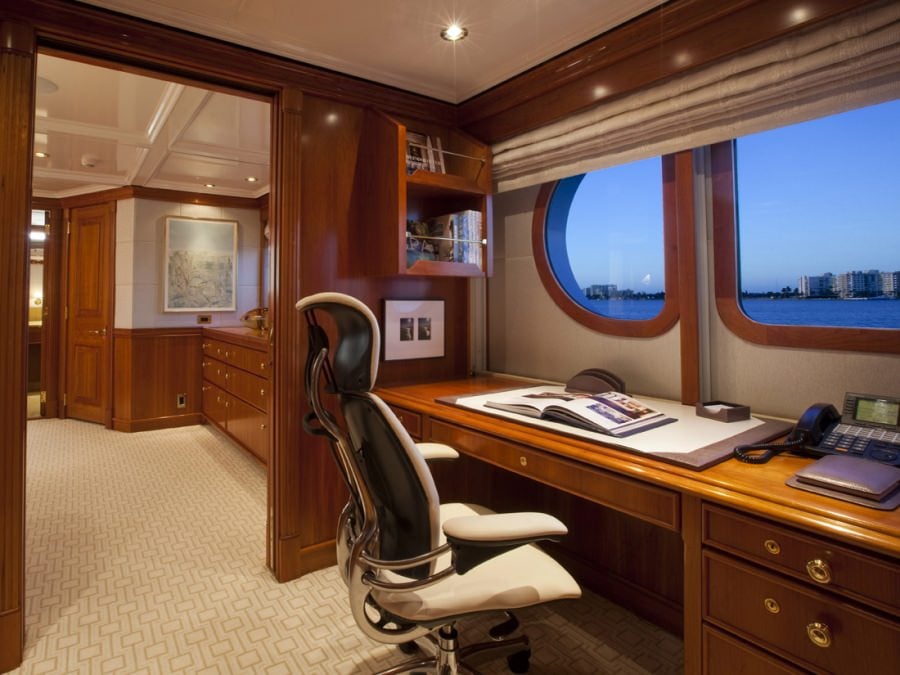 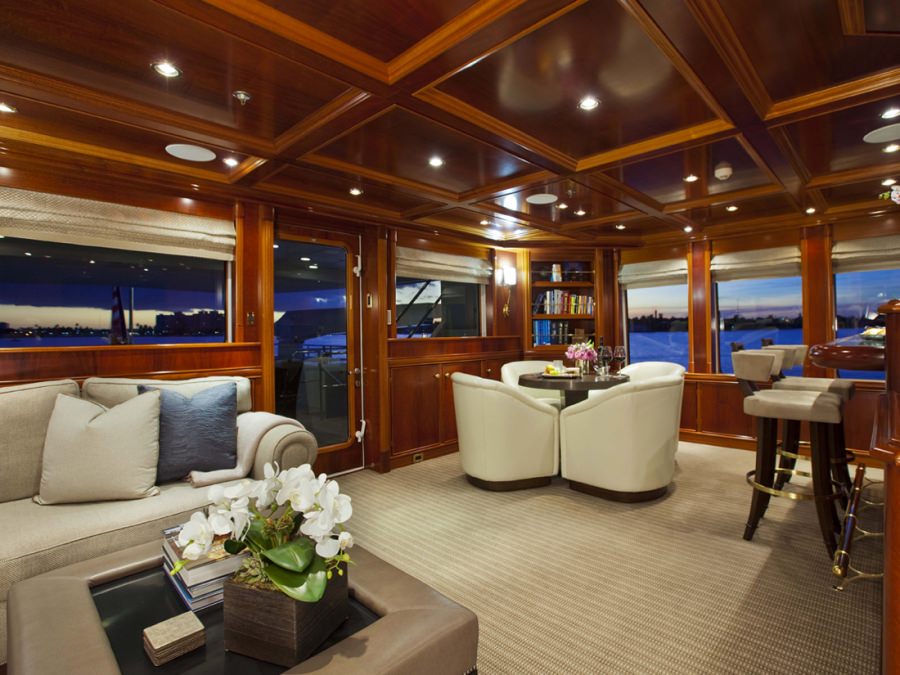 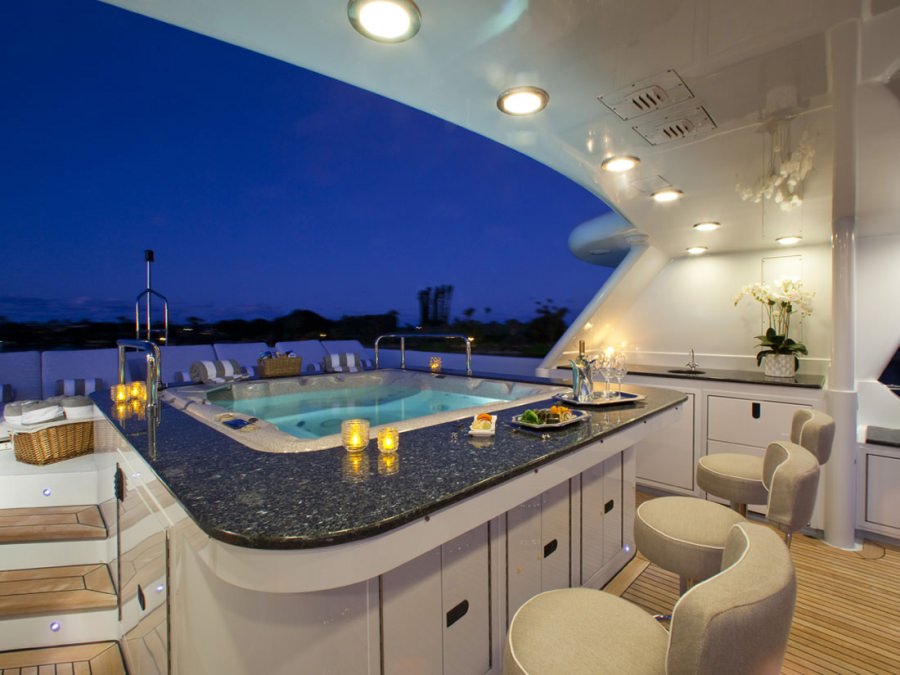 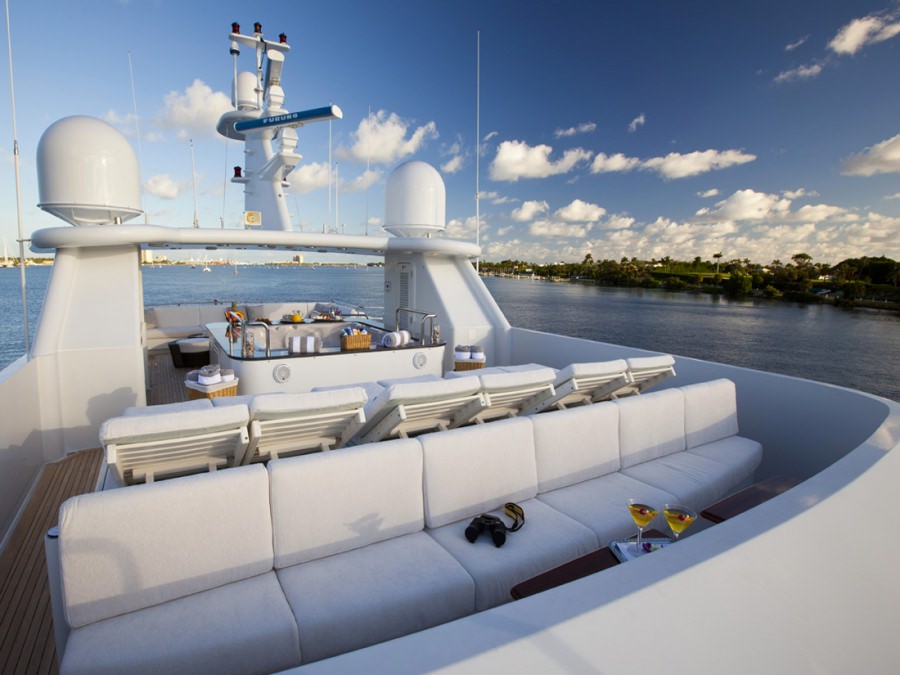 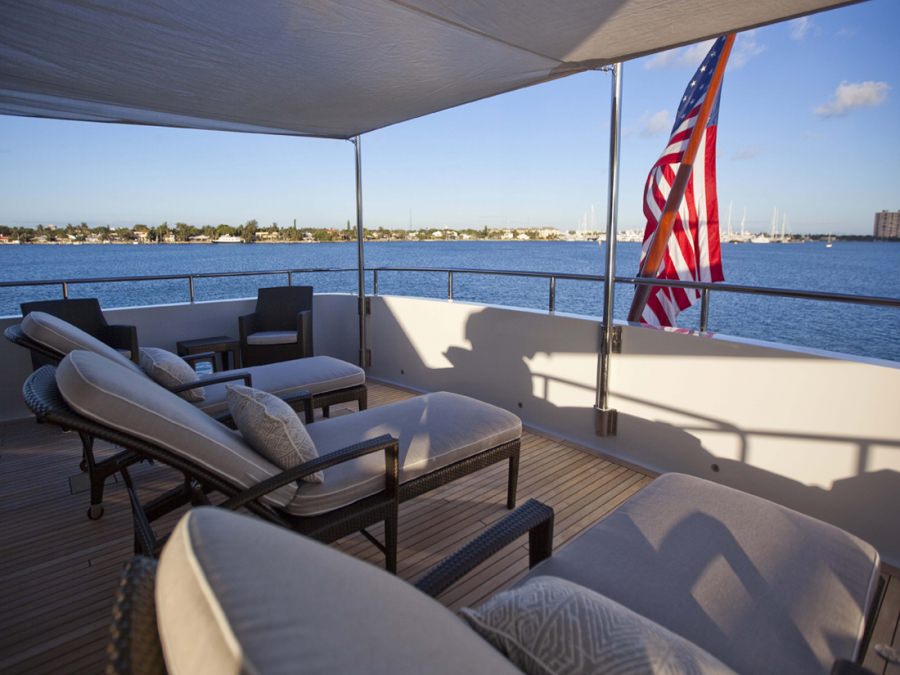 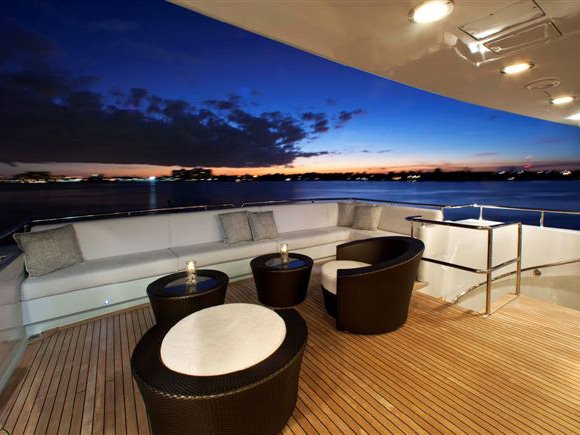 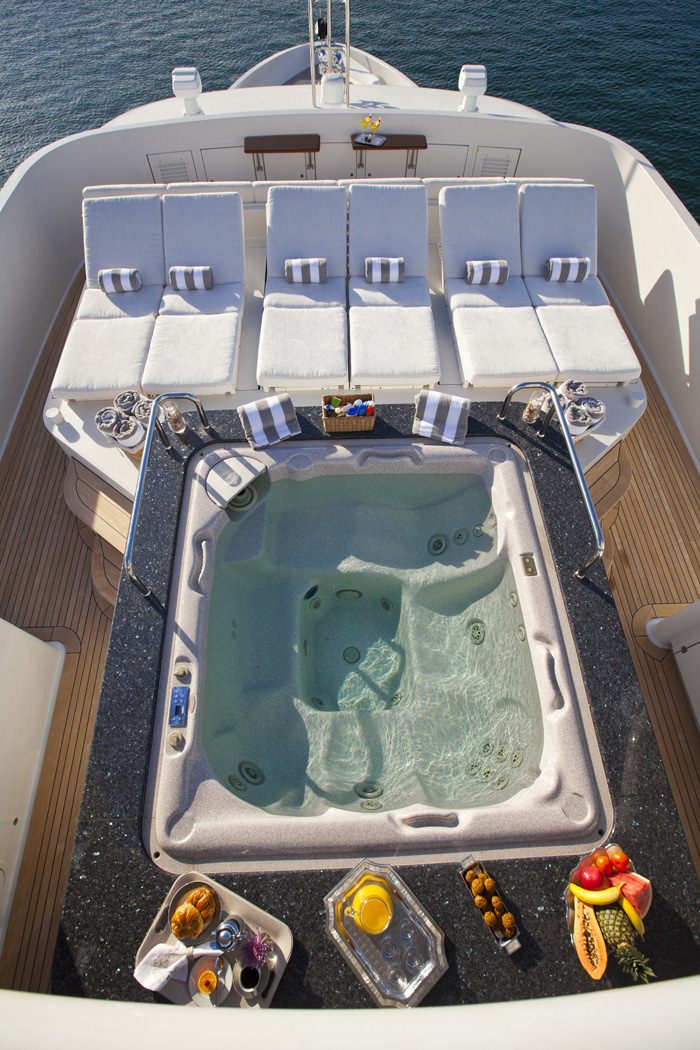 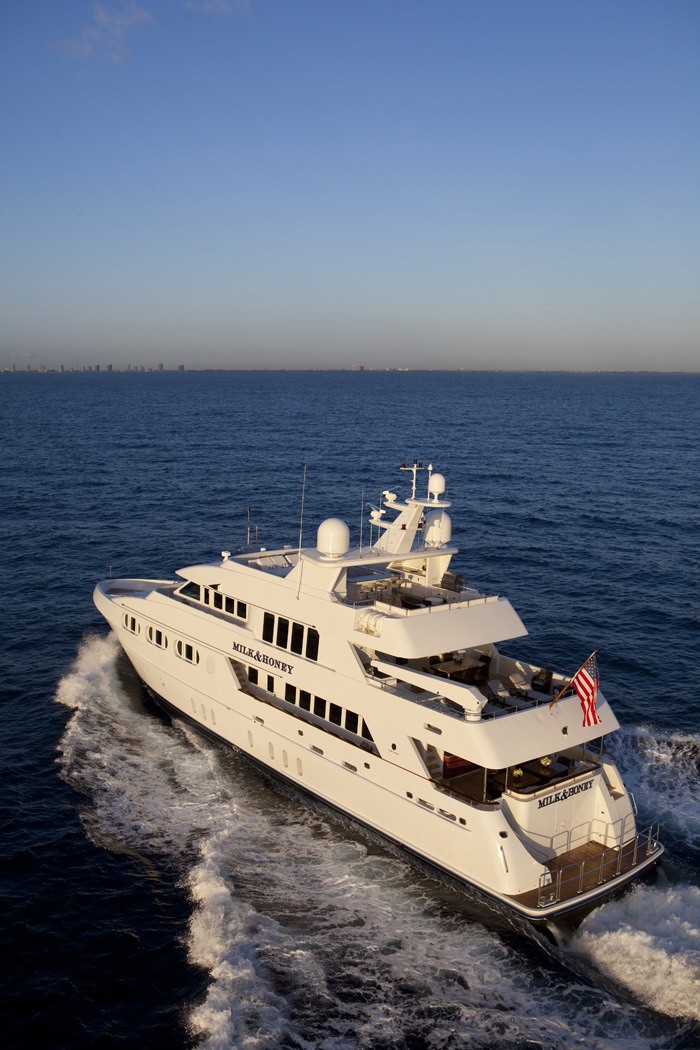 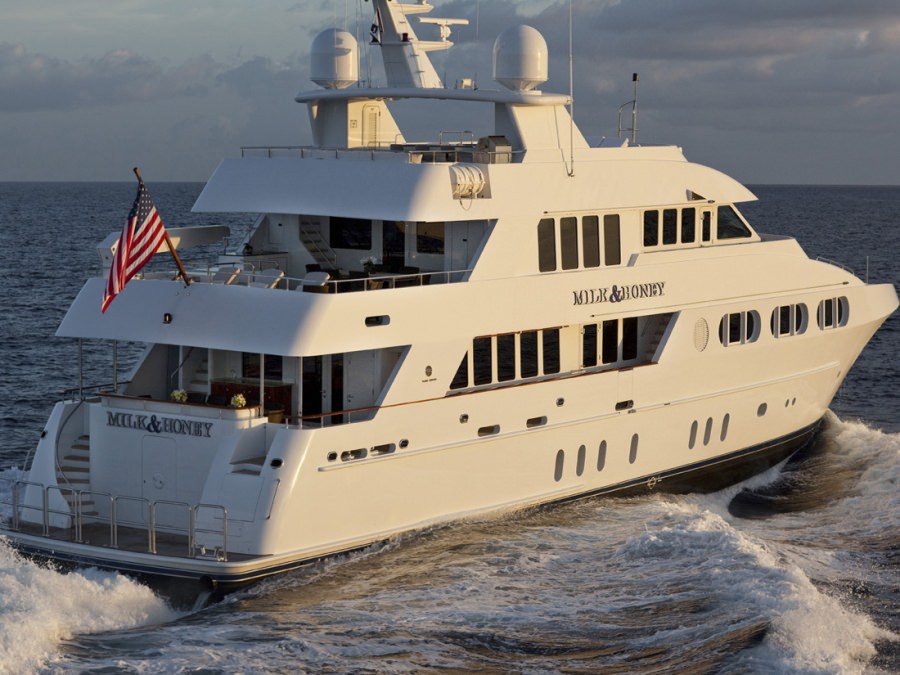 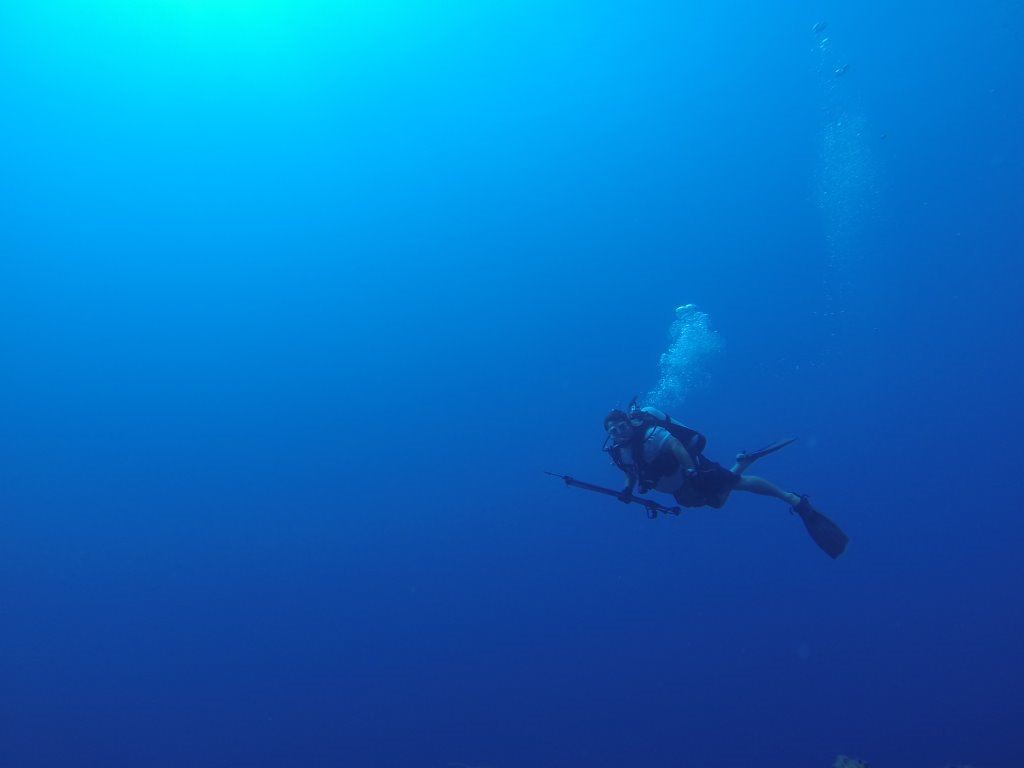 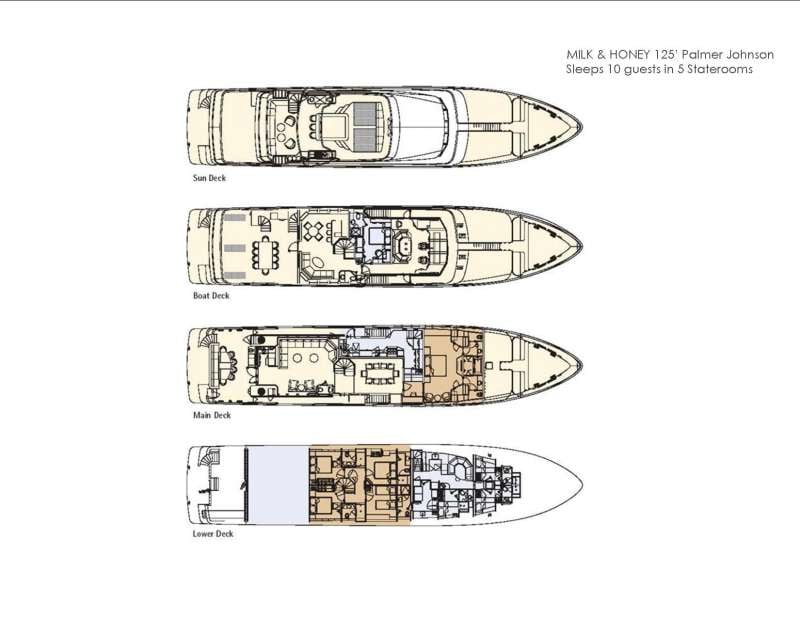 MILK & HONEY is always highly maintained.
2019 updates:
– New chairs and carpeting in the sky lounge
– New carpeting on the stairs throughout the boat
– Lots of fresh paint on the exterior
– New exterior cushions and canvas 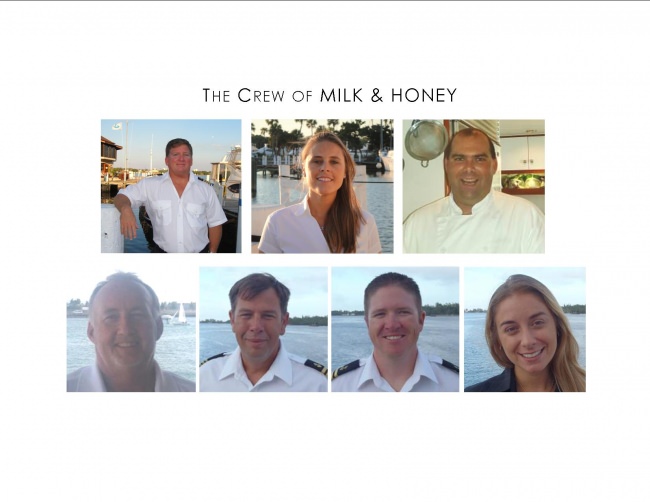 CAPTAIN KENNY TASSIN |American
Captain Kenny grew up in boating, fishing, and sailing in southern Louisiana and the Gulf of Mexico. His love for the water found him in The Bay Islands of Honduras as a boat Captain and Dive Guide for several years. Captain Kenny’s 30+ year career in the yachting industry has been focused mainly on charters. His areas of cruising expertise includes the Eastern and Western Caribbean, Bahamas, Florida, New England, Western Med, and Alaska. Kenny has run prestigious vessels such as GATSTER, AERIE and GALE WINDS prior to joining MILK & HONEY 8 years ago. Whether hauling a monster fish over the side, pointing out unique tropical fish to divers or cruising to the most beautiful remote anchorages, Captain Kenny always delivers the safest, most comfortable and pleasurable trips for the most demanding guests.

CHIEF STEWARDESS CHANDRA TASSIN
American
Chandra was raised on the waters of eastern Long Island, spending summers living aboard her parents’ boat in Sag Harbor. At 20 Chandra became the Assistant Harbor Master and Dock Master for the Village of Sag Harbor and gained lots of experience running boats and tying up large yachts which laid the ground work for her 500 ton Masters License. While working there she met Captain Kenny and they decided to share their passion for life and the sea together. Besides keeping the interior of the boat in impeccable order, Chandra ensures guests will stay well pampered with the highest level of service and a beautiful easy going smile. She has been with MILK & HONEY for 8 years.

CHEF DE CUISINE KEVIN RICHARDSON | American
Chef Kevin is a culinary professional with 25 + years’ experience. His past experience includes: Chef on S/Y NIRVINA, a private yacht based on the East Coast, Chef de Cuisine at The Mountain Club on Loon in Lincoln New Hampshire where he achieved Top Chef of the North Country, 8-year tenure as Main Dining Room Chef at The Omni Mount Washington Resort, where he was instrumental in obtaining the resort’s prestigious AAA Four Diamond Dining Award. In addition, he has served as pastry chef at several boutique French Bakeries in the Boston Area. Kevin is a graduate of the prestigious Culinary Institute of America (CIA), pursuing his studies at both the Hyde Park, New York; and Greystone, California campuses, earning a Bachelor of Sciences in Professional Studies. Chef Kevin has been bringing a new level of culinary delight to MILK & HONEY for the past 4 years.

ENGINEER BLAINE WISE |American
Blaine grew up sailing on Long Island sound which has led to a box of sailing awards, 18 SORC’s, and an SORC win with Dennis Connor. He has built several boats and has been build engineer on several others, now works mostly on motor yachts. Blaine knows how to get the job done, and keep the boat purring along on MILK & HONEY for the past 4 years.

FIRST MATE STEVE STARBUCK |American
After college, Steve moved to Florida from Indiana to get closer to the sea and quickly found work at a marina. It wasn’t long before he was hooked on boats and landed a job as deckhand on a 114’ yacht. After three years on that yacht Steve decided to take his career to the next level and obtained his Master’s License in 2014. A few months later he took command on the same yacht as Captain. Two years later, with a desire to expand his horizons Steve joined MILK & HONEY as First Mate where he has become PADI certified and is currently studying for a larger license. His keen eye for detail and quest for fun will ensure you enjoy every moment aboard whether on deck, in the water or on a shore-side excursion. Steve has been with MILK & HONEY for the past 3 years.

STEWARDESS ALLANDRA JEFFS |American
“Allie” comes from an upscale estate maintenance and management background out west where she developed a passion for high end service and hospitality. Always having a strong sense of adventure and a true passion for the ocean, she migrated to yachting. Greeting you with a smile and cheerful demeanor, Allie is always happy to assist in any way.

DECKHAND CHRIS GRANMAISON | American
Between growing up on the beaches of San Diego and taking weekend trips on his father’s fishing boat, Chris has always had an affinity for the ocean. After graduating from university, Chris traveled through Central America, Australia and Southeast Asia. Through these travels, he became inspired to join the yachting industry. He will make certain to provide you with an all- around great experience, as he has a 15 year background in high end hospitality. His passions include playing hockey, scuba diving, travel, snowboarding, and photography.