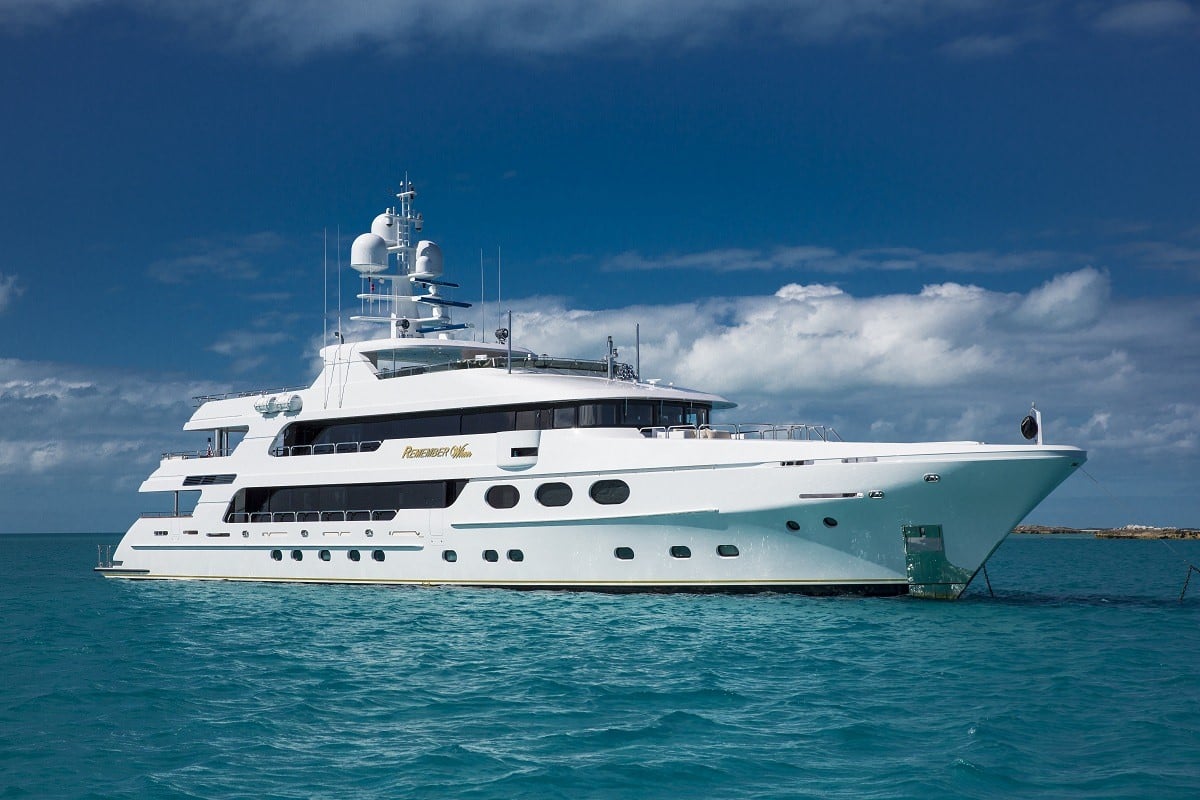 MASTER STATEROOM ON-DECK FORWARD
On deck, forward, full-beam Master Stateroom: Upon entry, there is a private office with desk facing large windows for a gorgeous view.

The centerline king bed faces forward towards a 65 inch TV (hidden while not in use). Dresser to port.

LOWER DECK ACCOMMODATIONS:
There are five guest staterooms midships on the lower deck which can be accessed by elevator.

Aft: The VIP stateroom is a spacious stateroom with walk-around king-size bed, 60 inch TV, dresser with drawers and closet. The en-suite features a Toto Neorest heated bidet/head with motion sensor, his- and her- sinks, stall shower, and Jacuzzi tub.

MAIN DECK:
The main salon is semi-divided by a black walnut cabinet with back-to-back TVs (recessed when not in use). The lounge aft is an inviting space with Hamilton Piano. The formal dining area is forward and accommodates up to 12 guests. A pocket door leads to the galley and service areas on the port side. Access the elevator on the starboard side. The day head is also situated on the starboard side further forward.

AFT DECK:
The aft deck is covered, and has a C-shaped bench seat with two tables and four additional chairs aft to accommodate 10-12 guests for a more casual dining experience. There is a full wet bar with three bar stools and 37 inch TV to port. The aft deck can be air conditioned, and has wind doors to the walk-around decks. Access the swim platform on the starboard side or take the stairwell to the bridge deck.

BRIDGE DECK:
The SKYLOUNGE is a most welcoming and comfortable area with L-shaped sofa and two tables to port with a 3D 60 inch TV. On the starboard side is a game table and recessed bar with an exquisite light up Onyx bar top, 6 bar stools, and a 37 inch TV. The day head is to starboard and the Bridge is forward with access to Portuguese deck. The black-out blinds make this space perfect for cinema night; or open up the aft doors completely to extend the skylounge into one space with the bridge deck aft.

The al fresco bridge deck aft dining area is shaded with misters and A/C overhead, wind doors to port and starboard, plus the option of Eisenglass or privacy shades to port and starboard. Full wet bar to port and 60 inch TV to starboard. The large round dining table has a built-in auto Lazy Susan and can accommodate up to 12 guests. Aft of the dining area are two chaise lounges centered, plus an L-shaped bench seat with cocktail table to each side, port and starboard. You can access the aft deck or sun deck stairwells on the starboard side, or walk around to the Portuguese deck forward. The bridge deck can be accessed by the elevator.(For wheelchair access, the elevator is 27.75 inches wide).

SUN DECK:
The sun deck is semi-shaded area with hard-top midships plus an additional three triangular sun shades forward if desired. The oversized Jacuzzi can accommodate up to 10 guests surrounded by large sunpads and is situated forward with three adjacent bar stools to enhance this space as a great social gathering place. On the starboard side there is a full bar with nine bar stools, 60 inch TV, BBQ, and day head. To port is a comfortable C-shaped seating area with cocktail table. Aft is a terrific sunning area for those seeking full sun with 2 chaise lounges, toy storage while underway, and exercise equipment. The Sun Deck can be accessed by the elevator.

Keith Caulfield, known as KC, grew up in St. Croix, one of the US Virgin Islands. As a child, he spent many weekends on his dad’s fishing boat and later worked for a tour and dive charter company on his home island. Although KC has held a Captain’s license for eighteen years, he began his career in yachting as a deckhand/ steward and has held the positions of mate and engineer. He knows the importance of a well-rounded crew member and a strong charter team. For years KC has captained both owner trips and charters throughout the Bahamas and Caribbean offering his local knowledge of these cruising grounds. His charter successes can be attributed to his enthusiasm to explore as well as his extensive knowledge of the best charter destinations. KC is great with children and has two boys ages 18 and 16. He loves fishing, shelling, snorkeling, and anything to do with water sports.

Christy hails from Botswana, spending her youth racing motor bikes and being in the bush until her family moved to the east coast of South Africa, Durban, when she was a teenager. From then on, she took up surfing and free diving to spend as much time on the water as possible. After high school she began studying accounting when her brother, a 10+ year yacht engineer, suggested that her adventure seeking spirit and hardworking personality would be better suited for a career in yachting. After 5 years in the industry her hard work has paid off and she has risen into the role of Chief Officer. She values providing the high level of service for yacht guests onboard

Leo was born in Caracas, Venezuela. From a very young age he was interested in being a mechanic. He was always fixing and repairing things around his home, thus came the decision to study Marine Engineering. Leo has more than twenty-three years’ experience in Marine Engineering. He has sailed worldwide, crossing oceans on different commercial vessels such as: Oil Tankers, Bulk Carriers, Container ships among many others but yachting is where is true passion lies. Leo is a very busy man, always working on projects around the boat. In his spare time, he enjoys spending time with his family back home, dancing to Latin music and meeting up with his friends.

Byron, a proud South African, was born and raised in East London. Before yachting, Byron studied at FET Collage & Border Aviation. He has vast experience working as a qualified electrician. He has a strong passion for flying and has acquired his private pilot license. In his spare time, he enjoys a game of golf, road cycling and loves being in the outdoors. Byron has a very friendly and helpful nature, always being the first person at a technical scene for help.

Chef – Wayne Dominico Gallo, South African
South African by birth with ancestral roots in UK and Italy, Wayne grew up in Durban Kwa Zulu Natal on the East coast of South Africa. After working in restaurants in SA he decided to move to UK to start his culinary adventure. During his 12 years on dry land in the restaurant business he would spend his free time traveling around the world with authentic local cuisine at the top of his to-do list. An avid surfer when not wielding a chef’s knife he found a way to combine his oceanic, culinary and traveling passions into a career in yachting. Creativity is a specialty of Wayne’s, and he is happy to conjure up anything your palate desires and cater to specific dietary requirements. With his mixed culture background, you will find a fusion cuisine combining local ingredients with exotic flavors. For hors de’ oeuvres to a formal dinner to a midnight snack, his culinary delights with tantalize even the most discerning taste buds. In his free time, he enjoys watersports and hunting down new surf hot spots!

Paige, from the warm Indian Ocean waters of Durban, South Africa grew up by the sea getting involved with lifesaving in her free time making her feel at home on the water. An adventurous spirit that fit right into yachting with her outgoing nature accompanied by a welcoming smile and attentive service. Working her way up in the industry, Paige has honed on those qualities proving a force within the interior team allowing guests to feel at complete ease and in capable hands. She is a motivation to all her team loves work onboard yachts, 7-star standards are what’s on offer with Paige and she looks forward to welcoming you onboard.

Amanda was born and raised in Stockholm Sweden. Growing up surrounded by the world’s biggest archipelago, specifically 50 thousand islands, the sea is naturally her second home. spending her summers as a sailing instructor, she grew out of the Hobie Cats and needed to size up therefore bringing to the super yachts. Amanda has 1.5 years I the industry and prides herself as being a perfectionist in her work, always providing the best service to her guests. Amanda’s long-term goal is to work her way up and improve her skill set as a stewardess. Amanda’s hobbies include football, staying active and healthy and exploring new places.

Meretha grew up in the pineapple fields of South Africa. She joined the yachting world in September 2019. Motor Yacht Remember When is the third boat she has worked on, she is very excited to transfer all the skills she has learnt from her previous boats such as table scaping, crafting cocktails, flowing arranging. Merehta recently completed her WSET Level 2 course which has expanded her knowledge, she is incredibly smart and loves learning new skills for the job. In her spare time, Meretha is always on the hunt for a great new coffee shop, adventuring in an RV with her Husband or practicing Pilates.

Tiffany was born in South Africa in the small town of East London. Before joining Yachting, she studied at ELMI College and became a nail technician. Tiffany has a strong passion for the beauty industry and had started her own business. Tiffany enjoys being outdoors, she enjoys keeping fit, fishing and watersports. As for the future, she plans on working exponentially hard to learn what it takes to be an interior leader

Jason, born in the south of France, raised in the sunny Caribbean coasts of Central America, Honduras, and Costa Rica. He speaks English, French, Spanish and Italian. An adventurous spirit with a love for the ocean and a passion for sport fishing. With 10+ years of experience as a mariner, Jason and the deck team will take you on unforgettable adventures in remote, pristine locations.

Lara from the beautiful beach town of Hermanus, Lara has a soul passion for living near the ocean. Lara was a part of the NSRI – National Sea Rescue Institute, where she became very confident in sea rescue and Sea safety procedures. She decided to join yachting to travel the world and meet people from all walks of life. She has the brightest smile on board, always keeping the guest and crew’s sprits high. She looks forward to racing you on the jet skis.