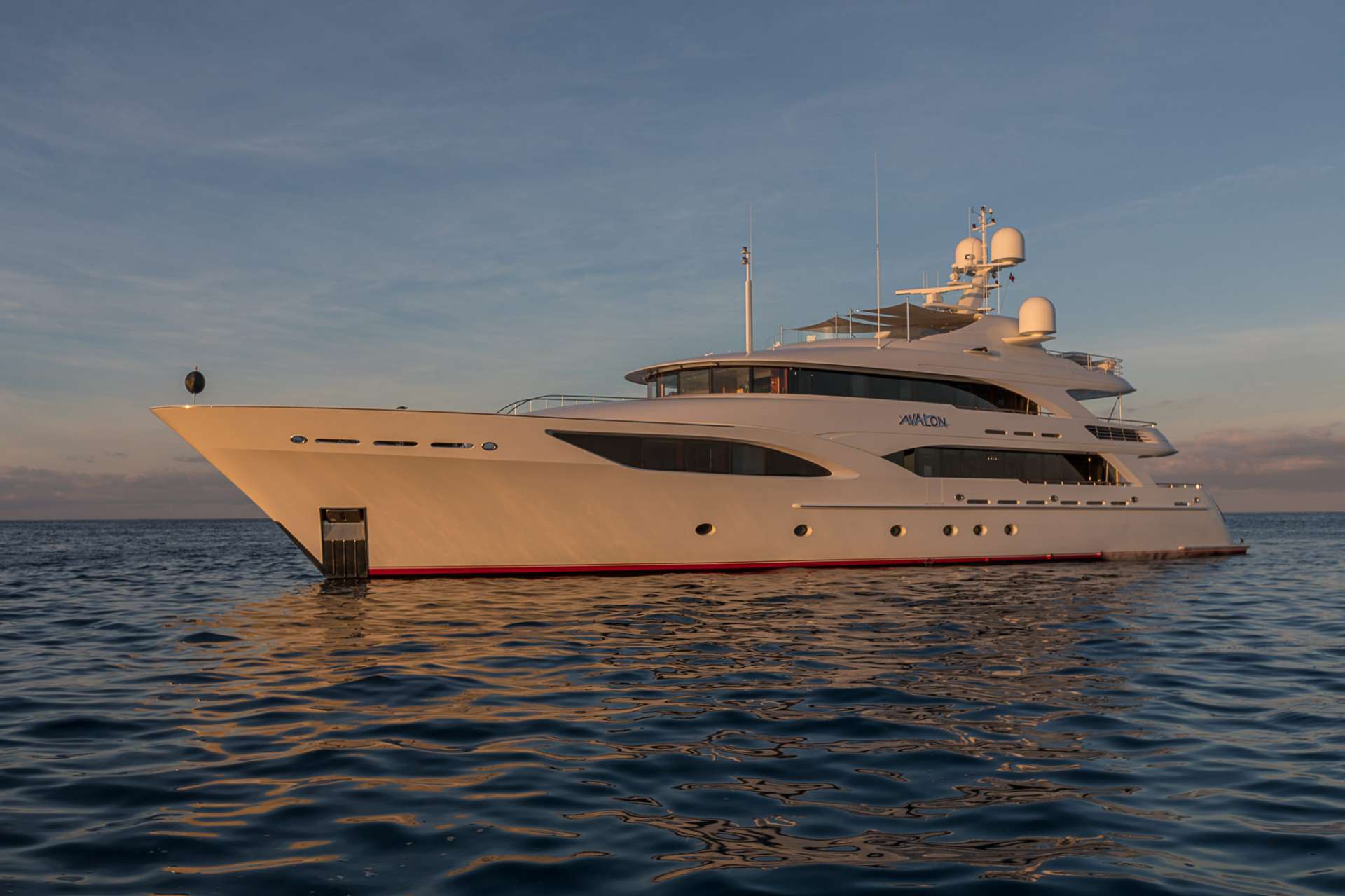 A total of 5 staterooms accommodating up to 10 adults + 2 children, complimented by a professional crew of 9.

MASTER STATEROOM SUITE
The Master Stateroom Entrance is situated on the Main Deck. Upon entering, Owner’s office area is to Stbd and features a desk and chair. The walk-around King bed faces aft and features a 46” flat screen TV, surround sound, vanity to port and couch to starboard. En-suite bath (can either enter on His side or Her side) with over sized Jacuzzi Tub, separate shower, twin sinks, private toilet, stackable washer & dryer in hidden cupboard. Heated flooring. The entire Master suite features 5 very large oval windows offering stunning views and plenty of natural light. Safe. iPod docking station.

BELOW DECK
Access to the 4 below guest staterooms are lead by a spiral stairwell with railings on either side. The guest foyer below also features a stunning Tiger’s Eye wall décor.

Other Entertainment: Extensive AV upgrades in Fall of 2017 – all new TV’s and integrated iPad controls plus sound system.

Captain – Jesse Clinton, USA
Captain Jesse hails from Savannah, GA where he spent his formative years living aboard his family’s traditionally rigged Class A Barquentine sailboat. It was this hands-on experience that made Jesse fall in love with the sea and both the challenges and rewards it renders .

Growing up in and around shipyards, Jesse was well accustomed to super yachts from a very young age. He recalls admiring a newly launched Feadship on the riverfront at the age of 12. It was at that moment he knew he would one day be in command of a vessel of similar stature .

His career has included a tenure in the tall-ship circuit, teaching traditional sailing, Marlinspike Seamanship, and crewing on many high-end private and chartered vessels. Jesse has competed in both near coastal and off-shore regattas in multiple classes. He is an avid waterman and enjoys spearfishing, free diving, and surfing in his spare time .
Through his combination of delivering superior-level service, his knowledge of local ports of call and his dedication to safety, he consistently ensures that all guests have a memorable vacation while onboard.

Jesse has spent the last decade cruising the Caribbean, Central America, the Bahamas, and the entire eastern seaboard. He took over command of Avalon in the Fall of 2019.

First Officer- Damien Craig, South African
Damien grew up on a dairy farm in South Africa in a farming town called Kokstad. He grew up riding horses and playing polo and riding dirt bikes. He attended junior and senior school in the city of Pietermaritzburg which is just inland from the city of Durban where surfing became one of his newer preferred hobbies.
Back in 2014 Damien started out as a deckhand on >250ft boats. The drive to eventually get the opportunity to navigate and steer these boats lead to Damien completing his 3000gt navigational officers license. With a dream to become a captain in the future he continues to build sea time to take his captains exam.
When Damien is not navigating the high seas, he enjoys water sports, relaxing at the beach and trying the local cuisine.

Chef – Mark Cervo, USA
Mark joins Avalon from an extensive career in the culinary world. Originally from San Jose, California, Mark spent over 15 years working in the Caribbean, specifically the Virgin Islands. It was here, after working as the Executive Chef in the Ritz Carlton, that he opened 3 restaurants and a catering business. Looking for a new challenge, Mark sold all of his ventures and discovered the world of Super Yachting.
Classically French trained at the Four Season’s Hotel, Mark has since had over three decades of experience and is well versed in all cuisines. He brings a wealth of culinary knowledge to Avalon and is excited to share his creativity with our guests.
In his personal time Mark enjoys golf, tennis and walking his dog Anis.

Chief Stewardess – Sarah Burton, USA
Sarah grew up on the water in Michigan on Lake St. Claire. Having gone through her yacht clubs junior sailing program she developed a love and passion for the water. The need for warm weather and sailing year round, she found herself on the west coast where she finished university and eventually ended up in Newport Beach, CA surrounded by sailors and yachites alike. She continued to sail while working in the medical field but always knew that working on boats was her ultimate career goal. Having made they leap of faith of changing her career she started working full time on boats in 2017. Her passion to serve others, eye for detail and laid back attitude makes her a perfect addition to Avalon. During her free time she loves sailing, reading, exploring new places, and relaxing on the beach.

2nd Stewardess- Kellie Kastner, USA
Kellie was born and raised in Minnesota —the Land of Ten Thousand Lakes. Spending every second of summer outdoors, her love for sunshine and the water developed early. Throughout school she was a dedicated athlete and studied biomedical science at Minnesota State University and graduated with a Bachelors of Science in Biology.
A unique study abroad program called Semester at Sea sparked her love for travel and the ocean after allowing her to live and study on board a small cruise ship. Shortly after graduation she moved to the west coast of Florida and followed her interest in health & wellness to become a 200hr Registered Yoga Instructor.
She has a passion for people, travel, yoga and adventure and found yachting a perfect way to share them all! When she’s not at sea, her favorite hobbies include exploring the great outdoors, rock climbing, water-sports, and hanging out in a hammock with a good book in hand.

3rd Stewardess – Saragh Virtue, USA
Saragh grew up in Lake of the Woods on both the Canadian and American sides. After going to university in Utah, Saragh decided to move to Minneapolis and work as a bartender while going on extensive backpacking trips across the world. She knew yachting was the right path to pursue with her love for warm weather, being on the water, and traveling. During her free time she loves to go on hikes, hammock with a good book, or jump on a paddle board.

Bosun – Drew Smith, USA
Drew’s passion for the water started at an early age. Growing up in Nashville Drew developed a keen ear for music, and eventually went to college for music production in Florida. While in Florida Drew found the ocean again and started his career in the yachting industry and was able to travel the world. For the last 2 years Drew has lived in Hawaii surfing the big waves of the North Shore while finding time to still get out on boats.
When drew is not trying to catch the next big wave you can find him flying his drone for pro surfers, free diving and hiking the wildness of whatever island he is on.

Deckhand – Zoe Degas, New Zealand
Zoe is a sunny adventurous soul from the cold south of New Zealand. Growing up surrounded by the great outdoors Zoe’s passion for diving, sailing, skiing and mountain biking was sparked. Beginning her yachting career at an early age, Zoe has traveled across Europe, the Pacific and America. She enjoys exploring off the beaten track and is always excited to go diving and discover local underwater gems. Zoe speaks fluent French and English. When she is not working she loves music, art and being in and around the ocean.

Chief Engineer – Joshua McMahon, USA
Raised in a rural community on a lake in Marietta Georgia, Josh left his home state to pursue seafaring through school at the United States Merchant Marine Academy. After studying both at school and on-board commercial vessels for 4 years, Josh graduated in 2020 and began working designing systems for new built ships and modifications aboard existing ships for the United States Navy. Josh realized that the appeal of the sea was too large and returned to shipping on commercial vessels throughout 2021. Josh then joined the Super Yacht industry in early 2022 to begin building a career with a new trajectory. In his free time Josh likes to pursue his passions in snow skiing, rock climbing, and hiking. 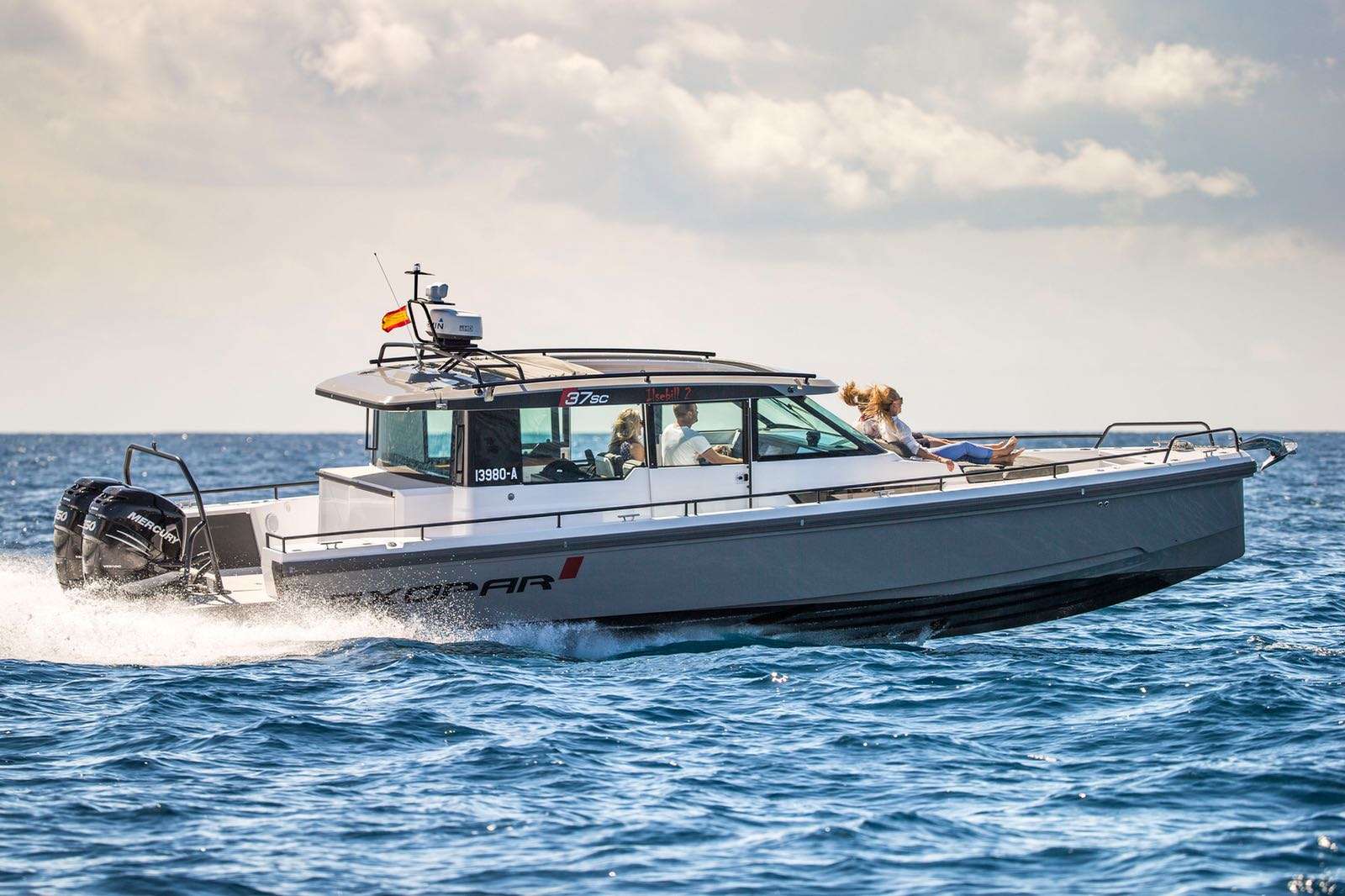