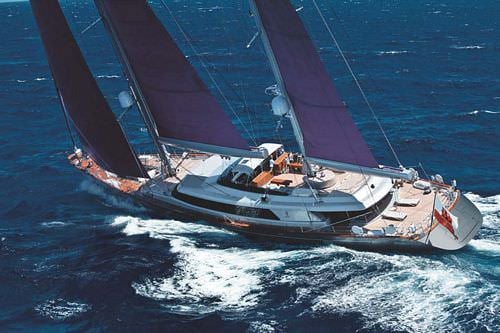 Baracuda Valletta can accomodate 10 guests in 5 cabins on the lower deck.
One Master cabin with a king size bed and his and hers bathroom.
Two VIP cabins with a queen size bed and two twin cabins, all with ensuite facilities.

Other Entertainment: Integrated state of the art audio/video system featuring Kahleidescape Video on demand
Centralised system with music, movies, chart etc that can be operated by an i-Pad throughout the yacht
i-Pod docking station throughout the yacht

CAPTAIN, Vangelis from Greece, Age 52
Also known as Baloo, Vangelis was born in the town of Piraeus in Athens. He holds a License Hellenic Merchant Maritime (Skipper A’Class) and has worked on various Sailing Yachts around the world.
Captain Vangelis has vast knowledge of the Eastern Mediterranean and knows the waters very well. He has also undertaken an Atlantic crossing from Spain to Miami and he has extensive experience in racing sail at offshore and Olympic Class boats since a very young age, winning medals in various classes.
In his spare time, Captain Baloo enjoys relaxing with his Wife and two Children.

CHIEF ENGINEER, Matthew Lenehan from New Zealand, Age 33
Matthew holds his Engineer License, Yacht master offshore 200T, STCW95, RYA Competent Crew, Powerboat Level 2 and has a Bachelor of Business Degree.
Matthew entered the industry in 2009 and he has worked on various yachts around the world. Matthew has cruised the Baltic, England, Scotland, Caribbean, East and West Mediterranean. He joined S/Y Baracuda in 2012 and is a valuable member of the team.
When he is not working, Matthew can be found either on the mountains snowboarding or in the sea playing with all types of water toys.

CHIEF OFFICER, George Mastandreou from Greece, Age 34
With many years of experience sailing the Aegean Sea, as well as the Western Mediterranean and beyond, George joined S/Y Baracuda at the end of 2015 and has proven to be a capable deck crew member. He has vast knowledge of deck repairs and maintenance as well as expertise in navigating.
George has many interests outside of yachting including cycling, skiing and watersports. George is also a fan of Formula 1 and is a whiz kid with computers.

CHEF, Nicholas Spanomaridis, Greece, Age 50
Nicholas holds a Chef Diploma from the Athens National High Culinary School. He has worked for many years as executive chef in luxurious hotels. In 2006 he joined the yachting industry and since then he offered his services on various charter and private superyachts.
Nicholas specializes in both Mediterranean & International cuisine. He is professional and creative with outstanding culinary skills. He is very passionate about his cuisine, eager to tailor make his guests’ menus and keen to present them with gastronomic extravagances or simple, heavenly tastes. He speaks fluent English and he enjoys travelling.

BOSUN, Nondas Bampasis, Greece, Age 30
Nondas is an avid sailor with a true passion for the sea. From a young age he has been involved in club racing around the waters of Greece. His love and knowledge for boats and the sea alike has fortunately enabled him to pursue a career in the Yachting industry. Nondas is a social able character and enjoys the interaction yachting provides with both crew and guests.
When Nondas is not getting his feet wet you can find him playing the blues, or taking long road trips on his Motorbike.

DECKHAND/ENGINER, Raemon Devlin from Ireland, Age 43
Looking to tick off his workplace bucket list, Raemon joined S/Y Baracuda in 2015 as a very valuable crew member, to fulfill his passion for boats and the sea. Carpenter by trade, this nomad has worked around the world in various jobs and careers, making friends al ong the way. His heart placed him in Greece, where he is content spending time with his wife and bringing up his family.As a singer, song writer by hobby, you can find Raemon jamming with his band in venues around Athens.

CHIEF STEWARDESS, Kyrie Watson from England, Age 27
Kyrie has worked in various luxurious restaurants and caterings in England before joining the yachting industry in 2012. Kyrie worked on large yachts around the world before making the change to sailing on S/Y Baracuda. She is always willing to lend a hand on deck when needed.
Kyrie is a dynamic, well-presented individual with a meticulous eye for detail and professional approach to her work. She is hard working, reliable and enthusiastic.
Kyrie won the Best Tablescaping Award in Category A’ Platinum of the “Chef Competition” during the 4th Mediterranean Yacht Show 2017 in Nafplion, Greece.
In her free time she enjoys cooking, reading, travelling and loves being sociable.

2ND STEWARDESS, Charlotte Saunders from New Zealand, Age 31
Charlotte was born in Auckland, New Zealand and has inevitably been involved in activities associated with the sea. She has, from a young age, had a keen interest in boating after sailing on her fathers 45ft sailing yacht, fishing and waterskiing behind the family powerboat. After completing 4 years at University in Auckland, Charlottes love for travel took her to Singapore where she worked, and of course travelled extensively. After three years in Singapore Charlotte took a leap of faith and began a new career, joining her first Motoryacht in the port of Antibes, France. Since 2013 she has worked on some of the world’s most prodigious Motoryachts in both permanent and temporary positions gaining some very valuable experience. Charlotte wishes you a comfortable and enjoyable stay.

3RD STEWARDESS, Doralina Barbieru , Age 41
Doralina was born in the Romania and now resides in Athens, Greece. She is a professional and dedicated stewardess with 7 seasons in yachting, more than 10 years hospitality background and 4 years of finance and administration.
Before entering the yachting industry in 2012, Doralina worked on large cruise ships around the world. Anna enjoys the creative aspects yachting provides as well as guest service interaction. After having worked on large mega yachts in the Mediterranean for a few years now she is well experienced and is thoroughly enjoying her time here on S/Y Baracuda.