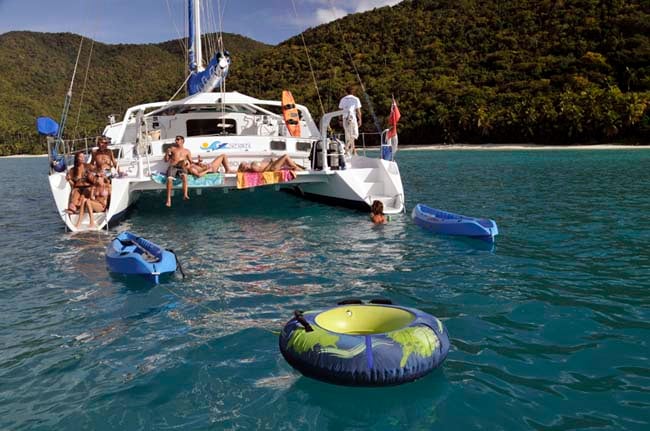 The sailed away from the Danish coast in 1983, their 10 year old son accompanying them, and worked Nana for the Danish government as a sail training ship for young people. They sailed the Baltic and North Seas, the English Channel and the Atlantic to the Azores, thence to the Mediterranean Sea and North Africa. Eventually the path lead to the Canary and Cape Verde Islands, and the Caribbean. After spending much time cruising the eastern seaboard of the U.S., the warm southern waters of the Bahamas, the Caribbean Sea and the Pacific Ocean, Marianne and Kristian knew that the tropics was for them.

After completing Casador, they started their charter careers in the Bahamas and along the shores of Central America before finally settling in the Virgin Islands, where they have now chartered for more than a decade. Marianne holds an International Yacht Master 3rd Degree license, and Kristian holds an International Yacht Master 1st degree license. Marianne also has a university degree in education, and is a master of the art of canvas work and upholstery, having owned her own canvas and sail loft for a number of years. Her father was a chef, and Marianne was brought up close at hand and instilled with a love of cooking and a keen interest in fine cuisine. Their extensive travels have only served to broaden Mariannes culinary horizons and gourmet options, creating mouth-watering delights for the many guests she has welcomed aboard for the past many years.

Kristian is by all rights a master shipwright, having operated his own yacht repair and wood working shop for years, though his education led him to fine arts, especially in art weaving. Kristian also has a passion for water sports, especially diving, and he is happy to share the fascinating marine life of the Caribbean with guests.

Marianne and Kristian look forward to making your cruise aboard Breanker the most relaxing and enjoyable vacation ever.