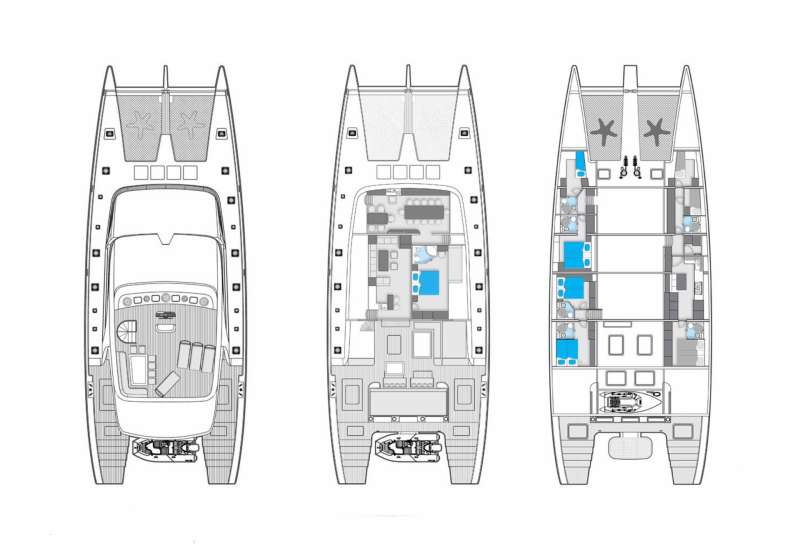 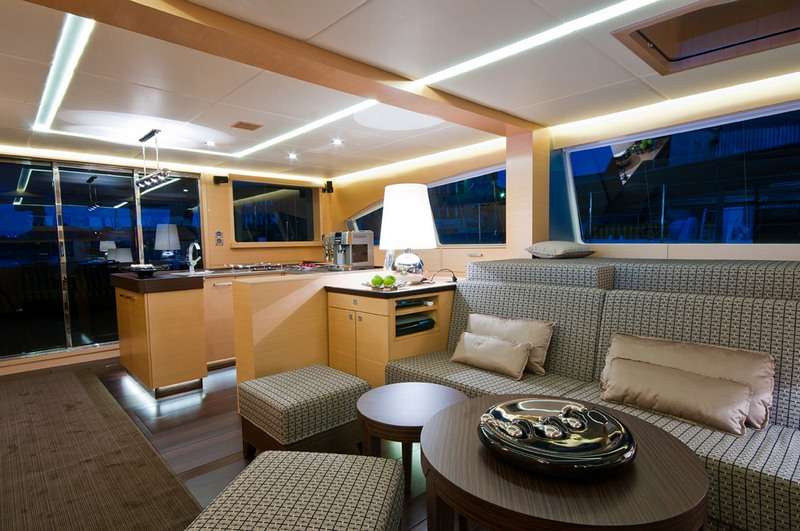 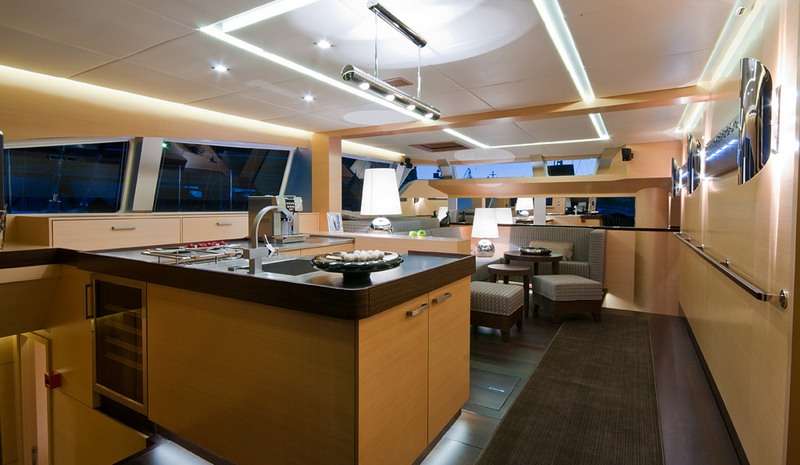 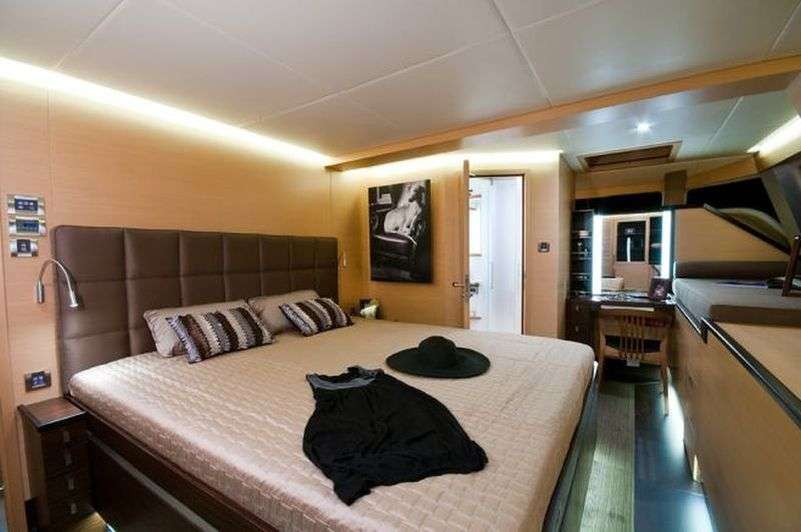 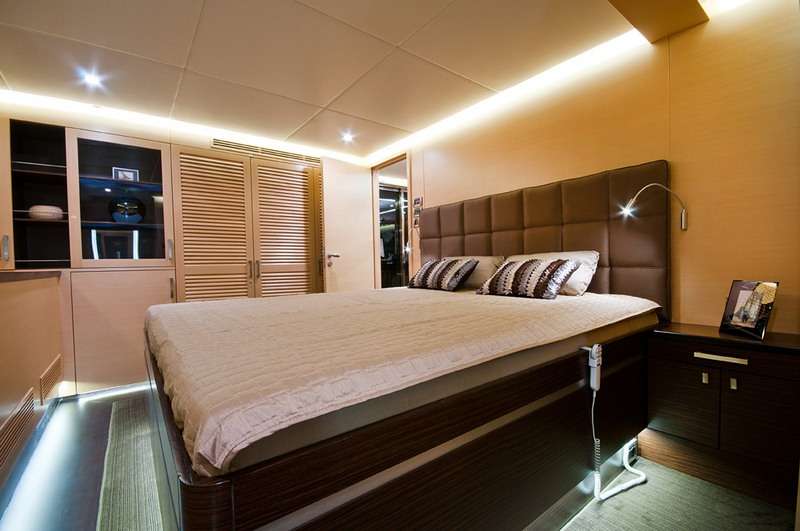 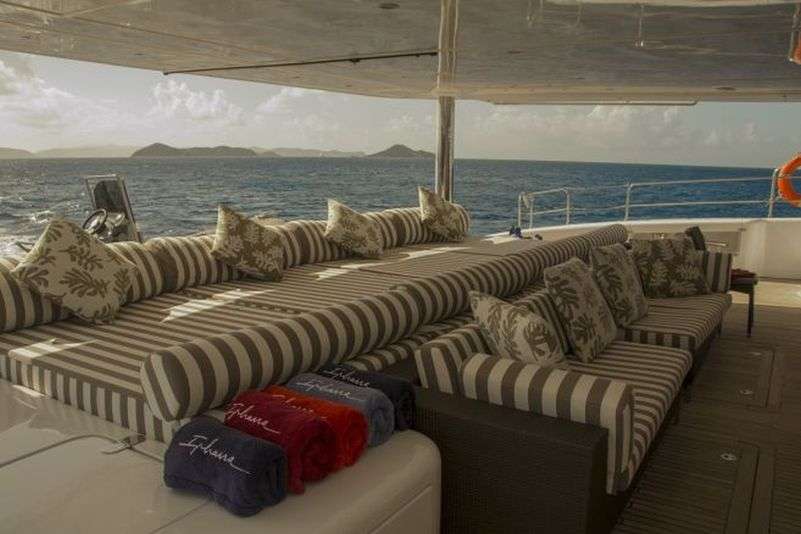 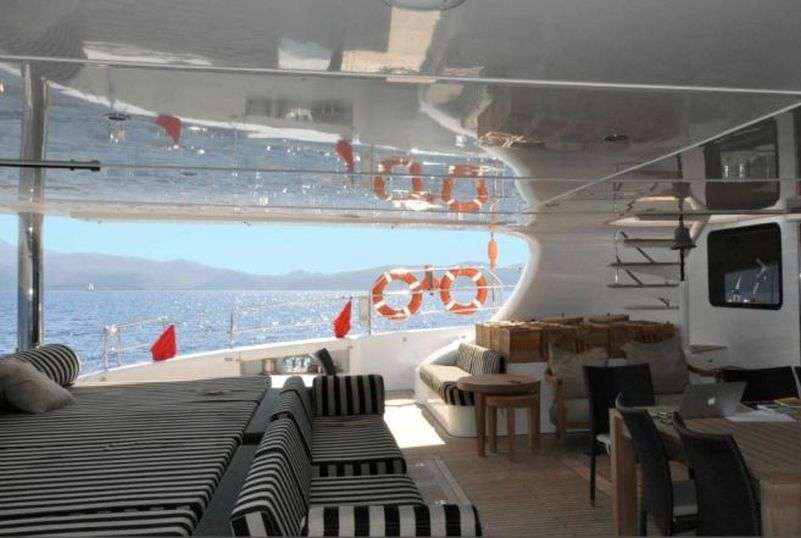 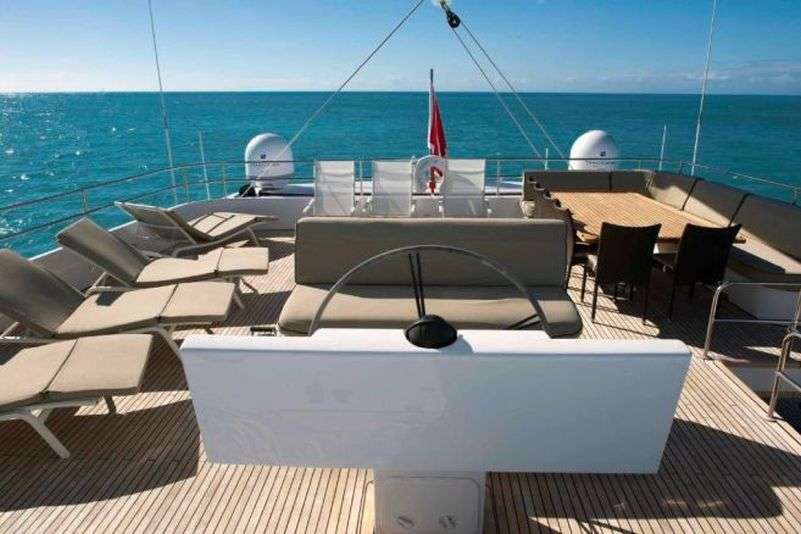 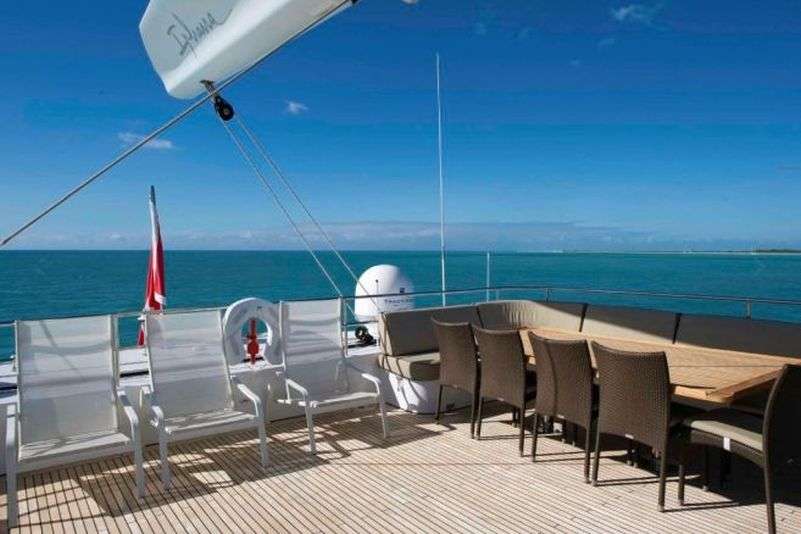 Ipharra comfortably accommodates in style up to 12 guests in 5 cabins.

– 2 VIP cabins with twin beds converted in Queen size beds if needed.
These 2 cabins do have also each a Pullman (for young people ideally) and they could be then 2 triple cabins = 6 passengers maximum (= 2 x 3 Pax)

For a pleasant evening you can watch the latest films from the onboard DVD library on an outdoor home cinema screen on the cockpit with the sea in the back.

The living room is the perfect place for entertainment in luxury, equipped with a multimedia entertainment system of the highest quality, including a 40� LCD television and Bose hi-fi audio system.

The meeting & dining room is equipped with high conference table/chart table with display screen purpose-installed for business meetings and video conferences. The opposite side of the lower deck is occupied by a dining table with high chairs for up to twelve people.Ipharra comfortably accommodates in style up to 12 guests in 5 cabins.

CAPTAIN: Franck FEREY
French
STCW95, CGO, medical 3, PCMM
Franck has a wealth of experience sailing the Seven Seas of the world for the past 18 years.
Languages: French, Basic English

Co-skipper on Tokio and Mari Cha IV, he was first mate on board Geronimo with Olivier de Kersauson when they broke the record of the round the World Jules Vernes Trophy in 2004.
Steeped in the culture of racing sailing yachts, Franck is equally comfortable in command of sophisticated charter yachts and continued his career as Skipper of very popular charter yachts such as Django Too, Rose of Jericho and the classic Tuiga, flagship of the Monaco Yacht Club.
Then in 2014 joined IPHARRA.
He looks forward to sharing his extensive knowledge of the best anchorages and
sailing grounds of the Caribbean and the Mediterranean. Franck is committed to safety and will enjoy taking you to a new thrilling experience on board this splendid catamaran.

Classically trained French Chef with over four seasons experience on M/Y and S/Y and over four years experienced in catering at a Michelin star restaurant in Cannes, Gustave has worked on private yachts as M/Y AFRICAN CAT 130’ in Monaco, S/Y LEVANTE 80’ in Pooland and Canary Islands. Also on charter yachts like M/Y INOUIS 115’, M/Y TORTOISE 115’, M/Y CLAUDIA’S 924? M/Y TILUSA 904 and M/Y SIRAN in the French Riviera
He would describe his cooking as Mediterranean, however he is also enjoying cooking world food and love making pastries and desserts.
He is easy going, hard-working and truly passionate.

After graduated at the Tourism and Management School in Switzerland, Danielle has been working all over the world.
From 2011 Danielle did enjoy working onboard several Motor and Sail yachts, first as a Stew, and then also as a cook.
She brings experience of busy professional charter and private boats, and she is very capable all aspects of table service, bartending and general housekeeping.
She has also worked as 2nd Stewardess onboard motor yachts (Askari 140’, Latitute 165’, Gloria Maris 140’) and catamarans and monohull (Aroa & Kaveka 44’, Oya 100’) in French Polynesia. She has also crossed Atlantic Sea several times. Danielle is aboard Ipharra since 2014.
In her prior career in hospitality management in 5 Stars Hotels in French Polynesia and Costa Rica, and
event Management in South Africa for the World Cup, she brings knowledge from all over the world. Smiling and enthusiastic she really enjoys her job and provides a high-quality service aboard.

Charlotte graduated at Stellenbosch University with a BCom Management Accounting Degree, after that she did her articles as an auditor/accountant and is now a certified Professional Accountant (SA). During her studies she worked in the hospitality industry as a bartender and waitress in a bar and at weddings or big functions.
Her love for boats and the ocean started at a young age when she used to join her grandfather on his fishing trips and by living in a small coastal town on the West Coast, South Africa where she had the ocean at her doorstep. She decided to join the yachting industry to explore the world by combining her love for the ocean and the hospitality industry.
She enjoys being surrounded by people and her positive, energetic demeanor makes her a valuable team player.

Arnaud has 4 years experienced in the yachting industry
He first worked in French Riviera shipyards as Mechanic, then as Mechanic/Deck-hand in Tunisia aboard Princess Sany 36m and in Urugay aboard a Mangusta 30m.
In addition of yachts and mechanics, he likes fishing and rugby.