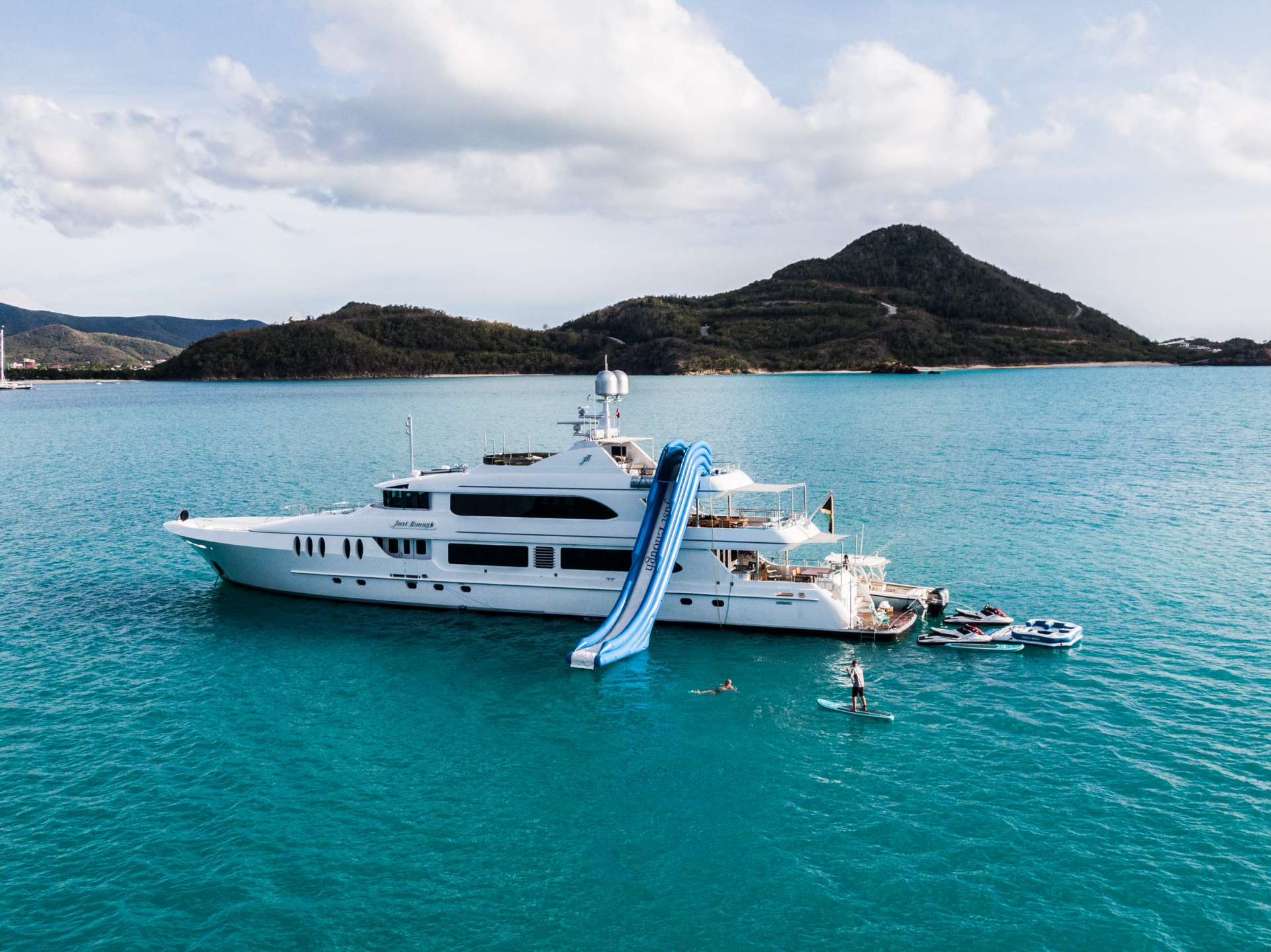 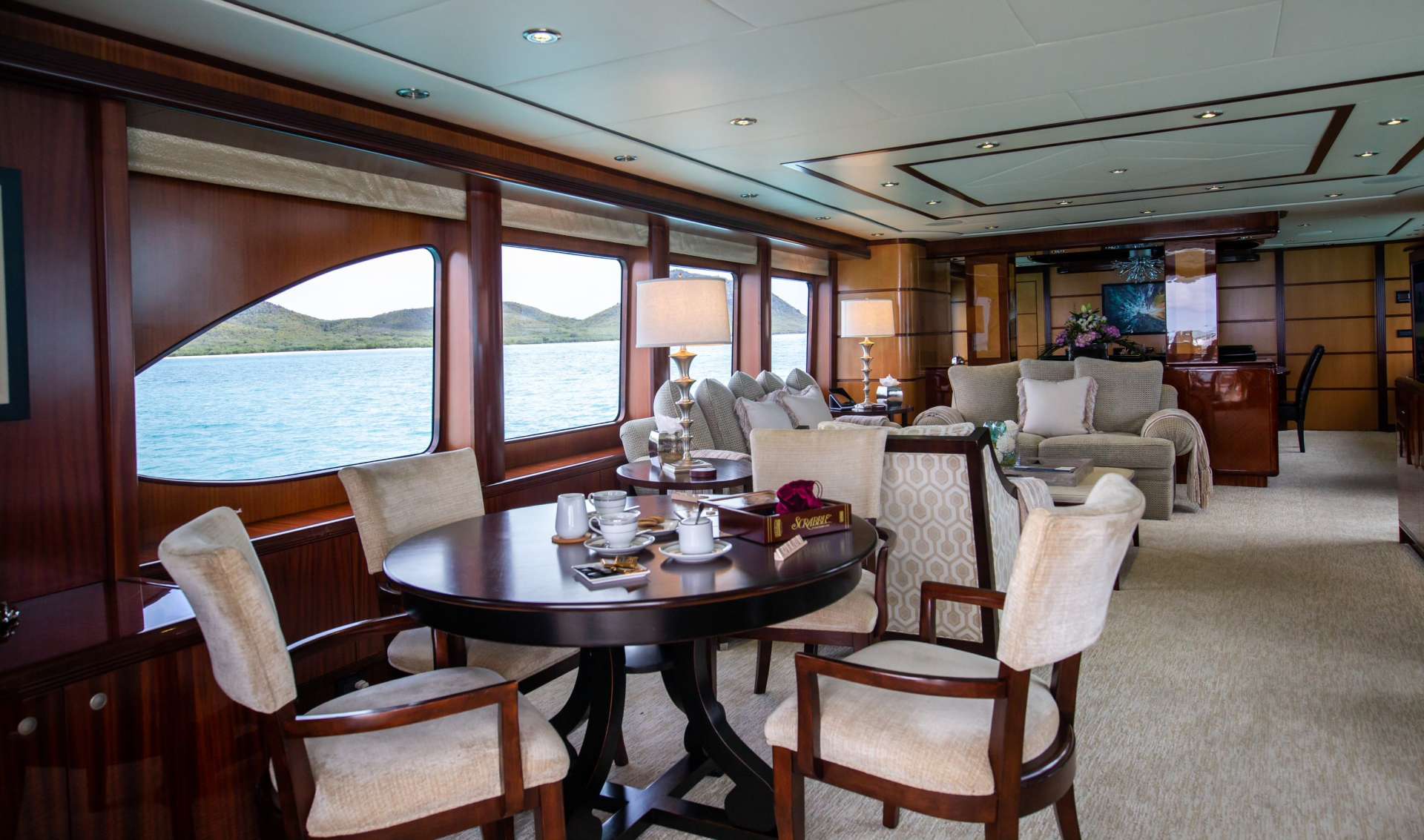 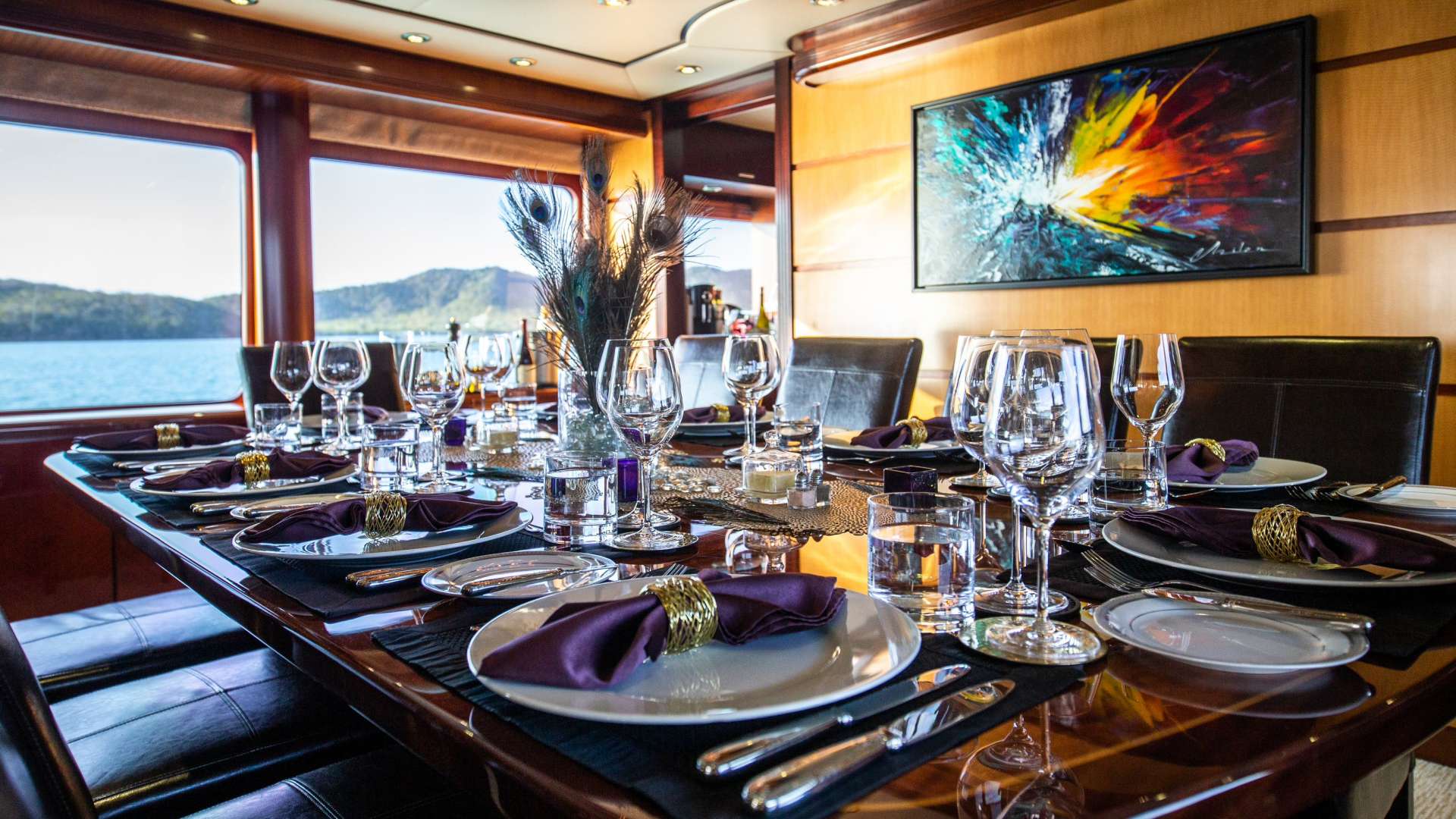 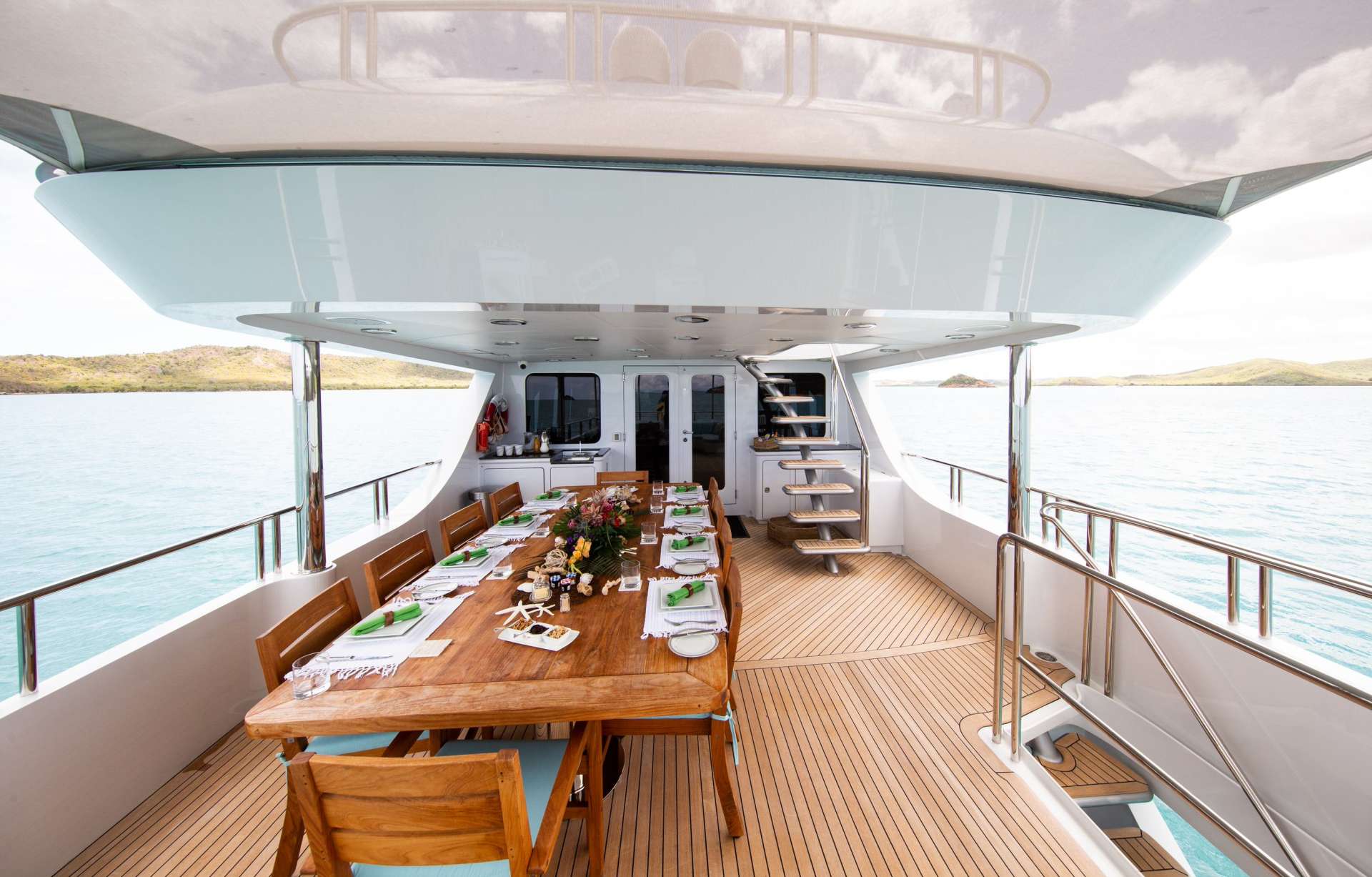 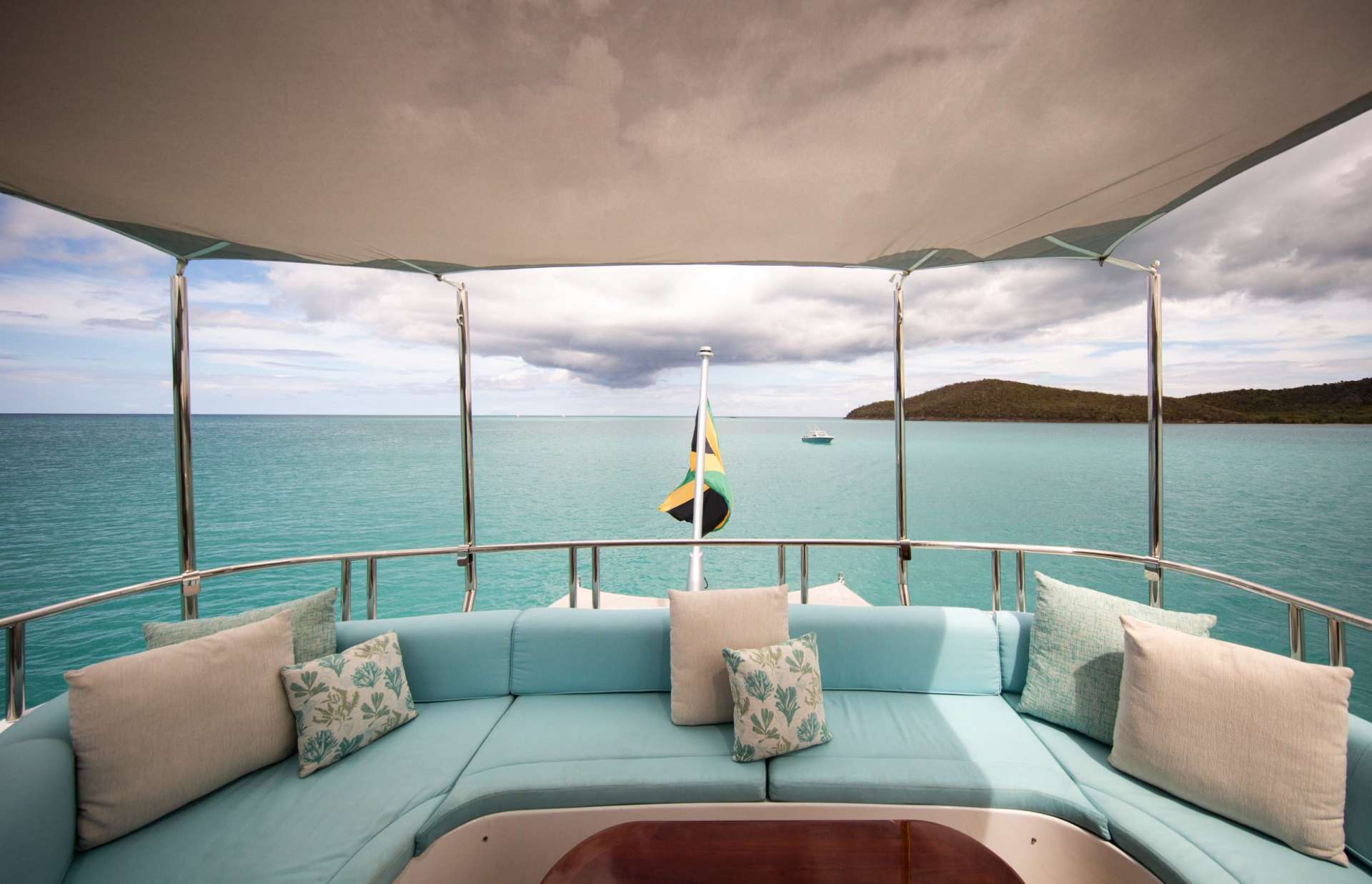 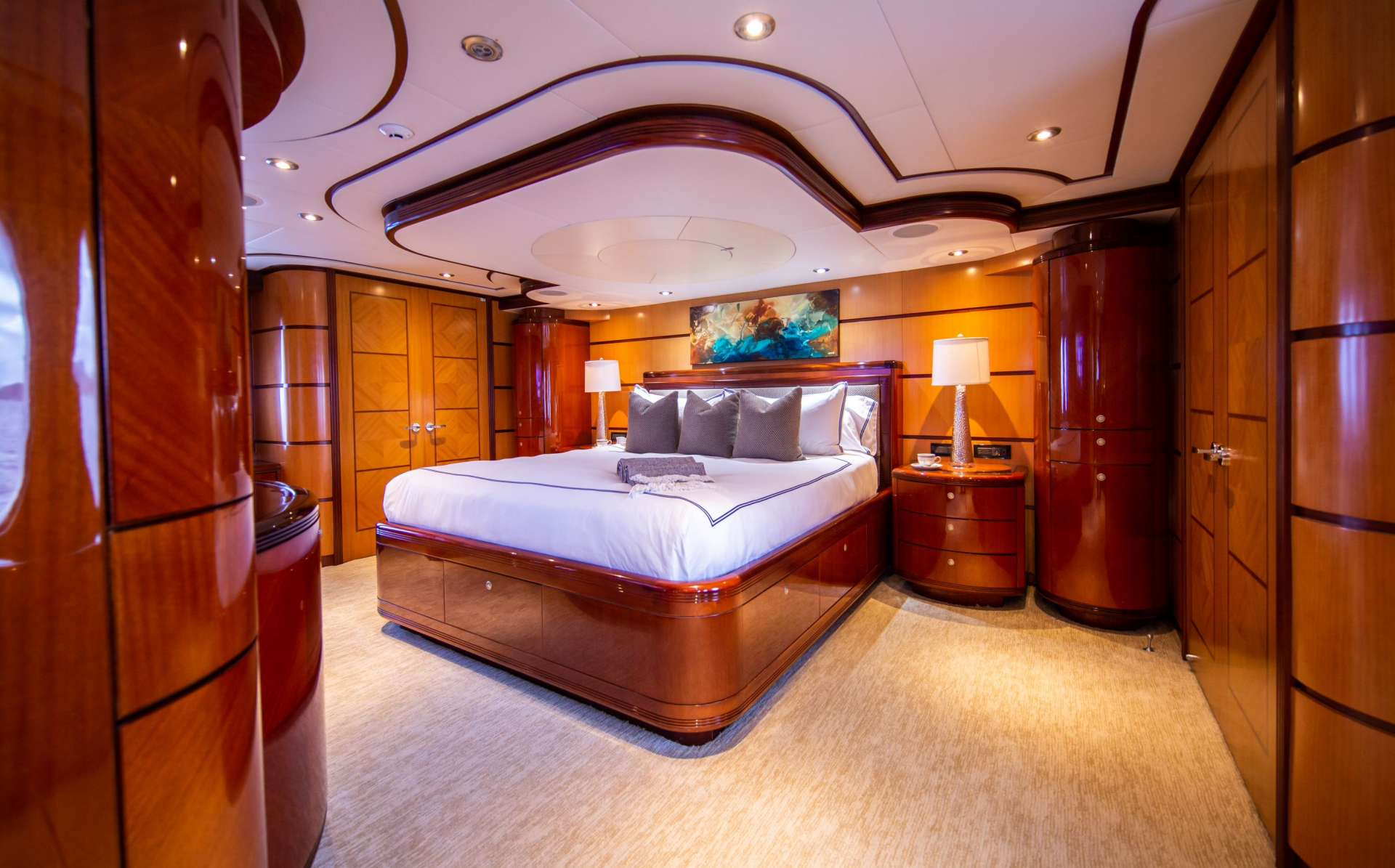 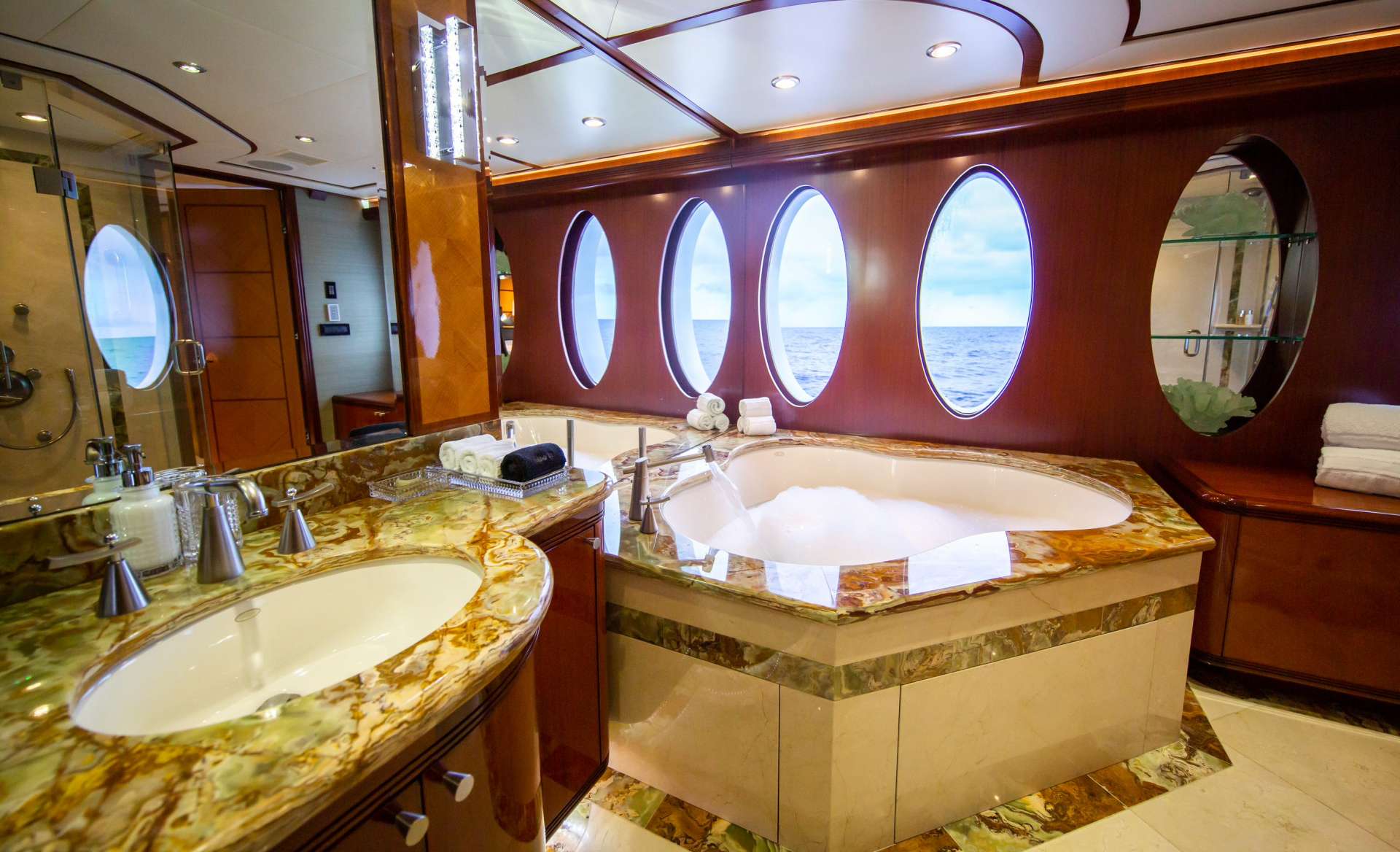 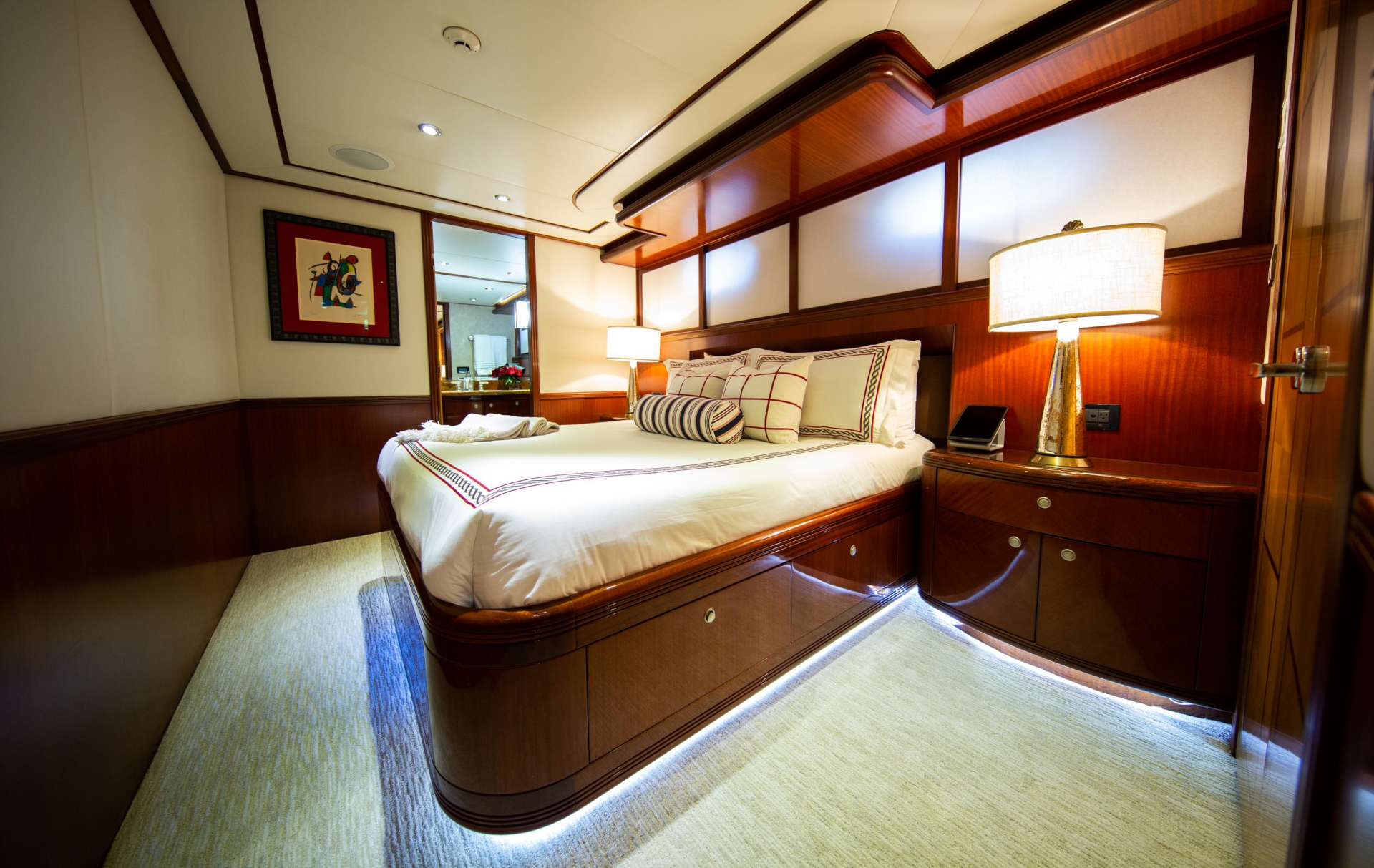 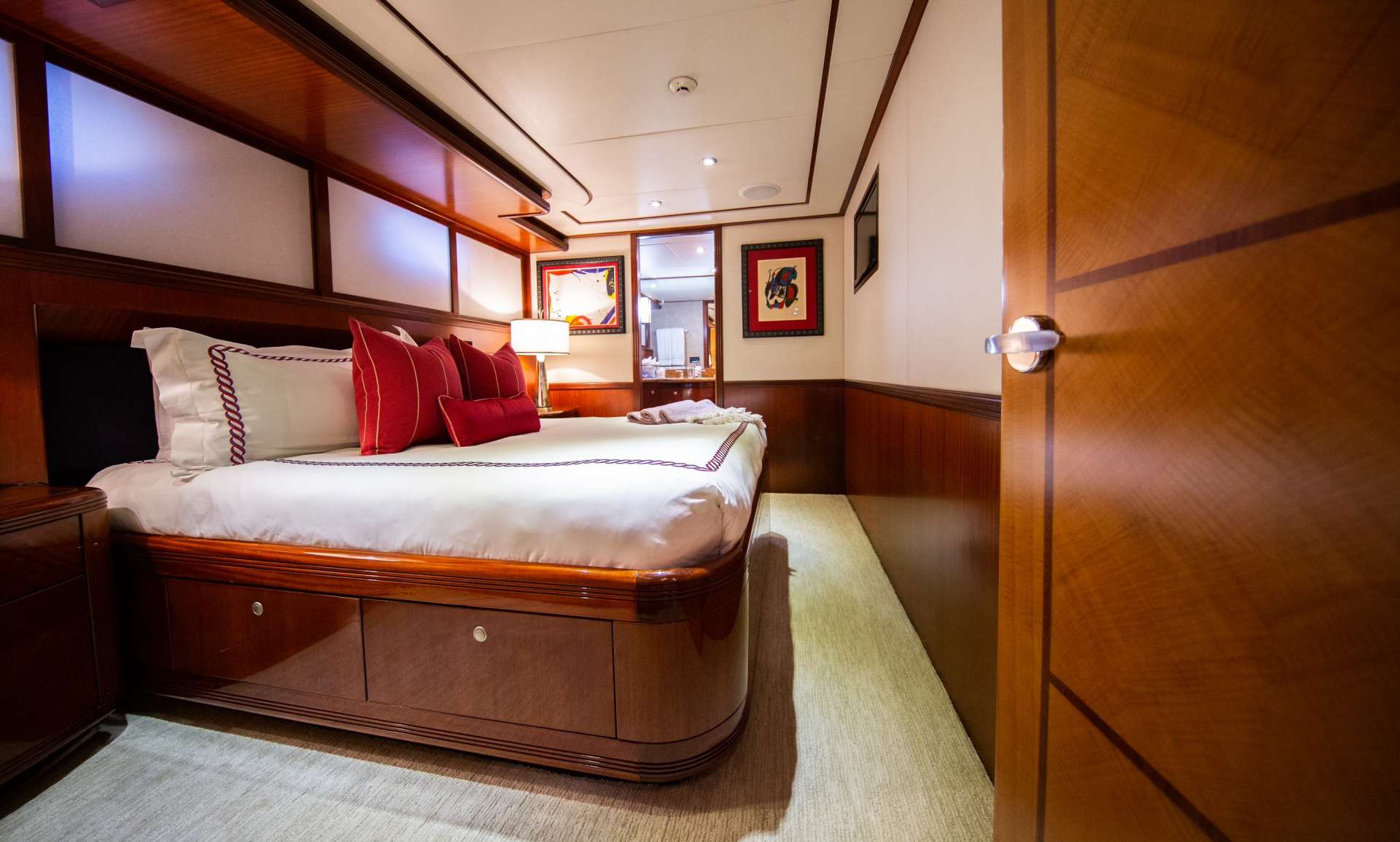 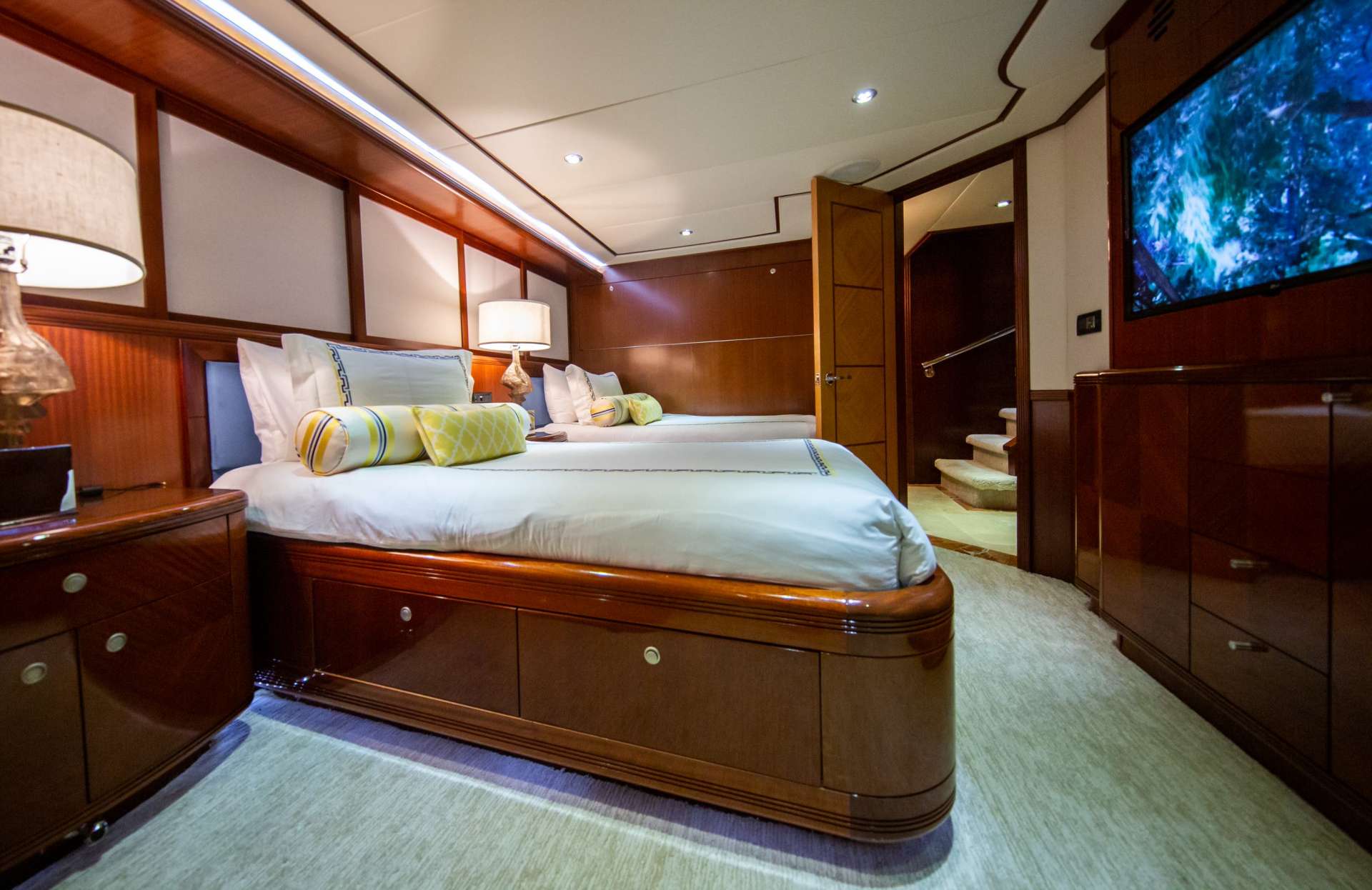 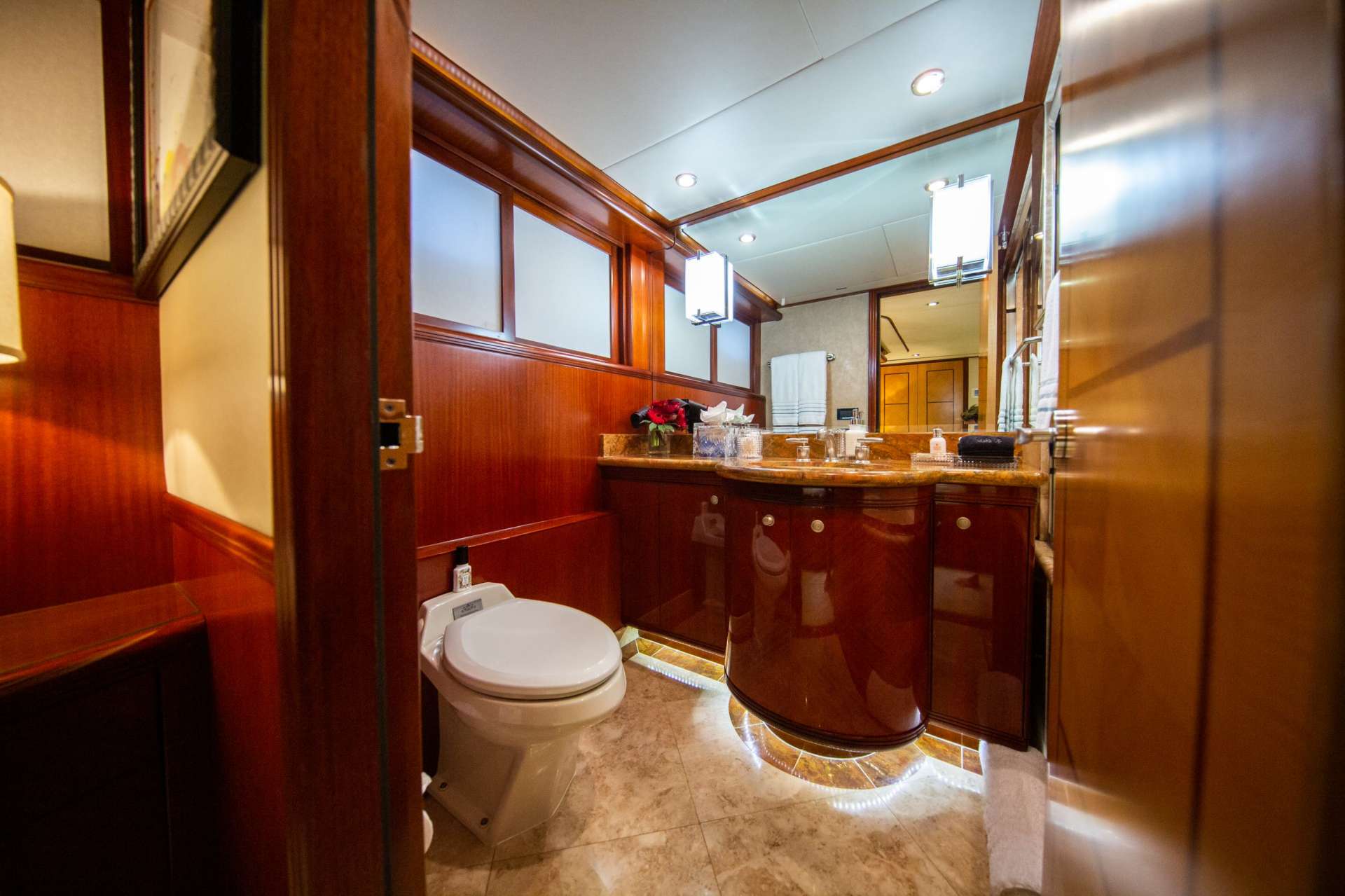 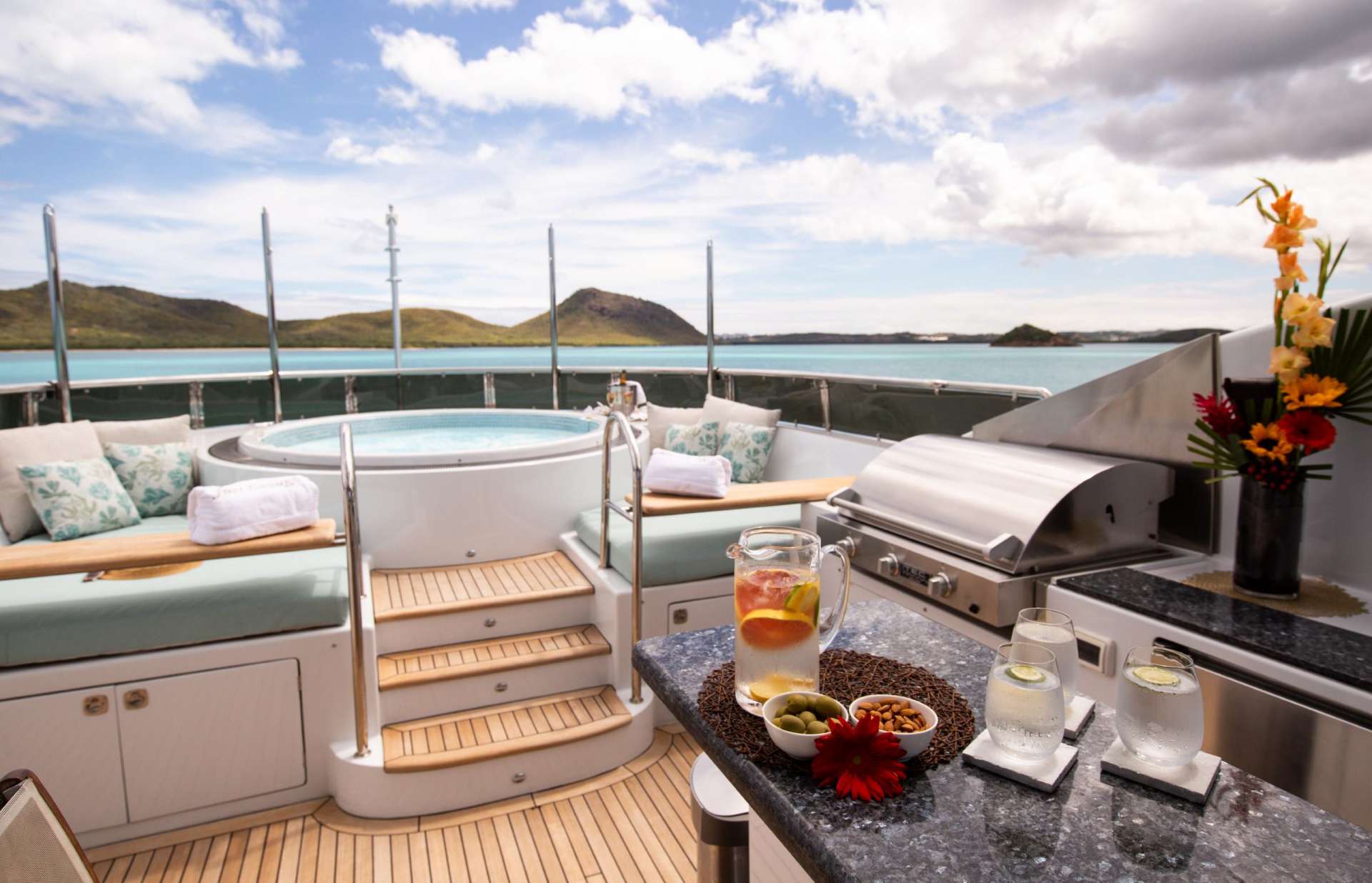 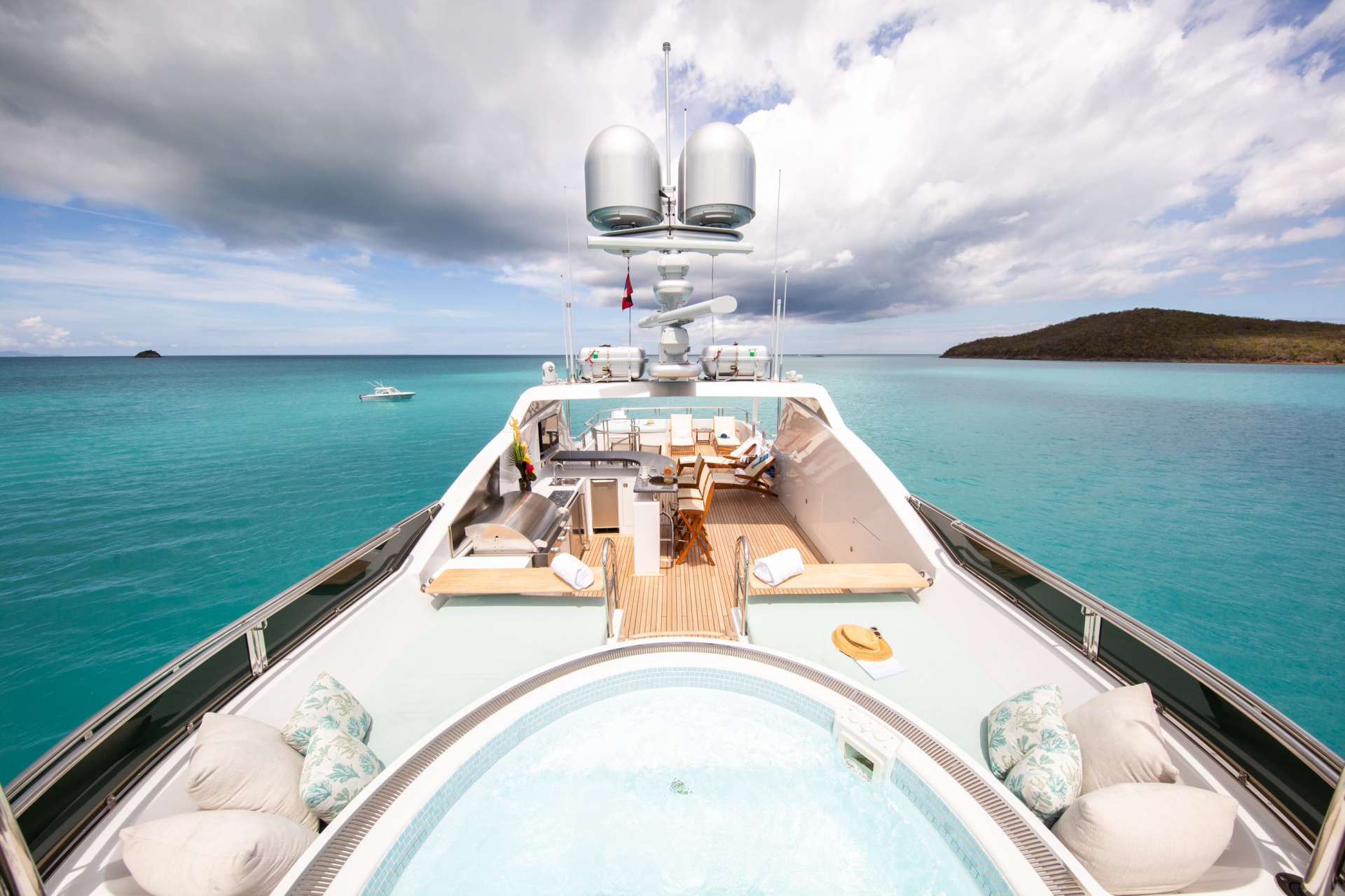 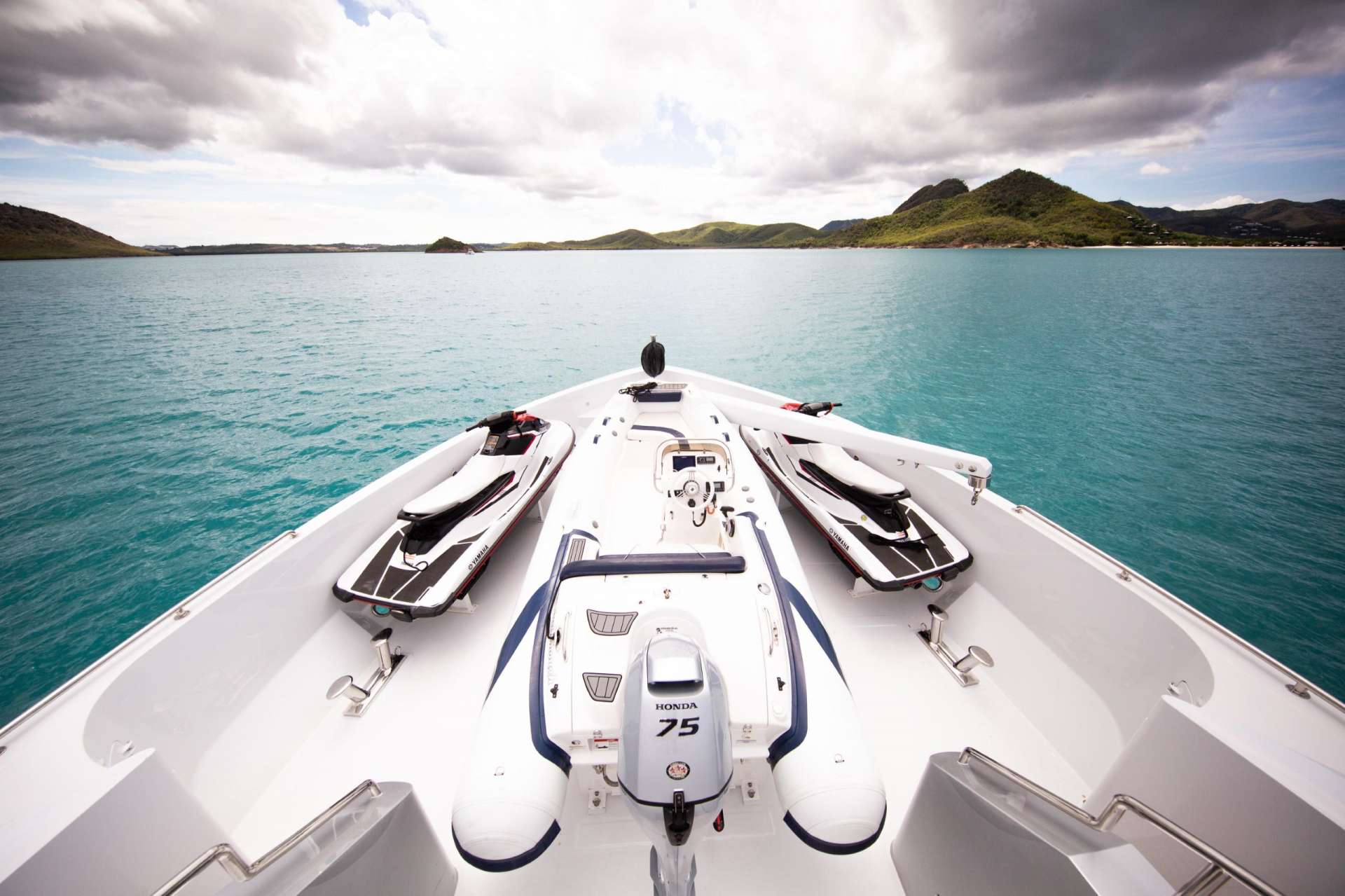 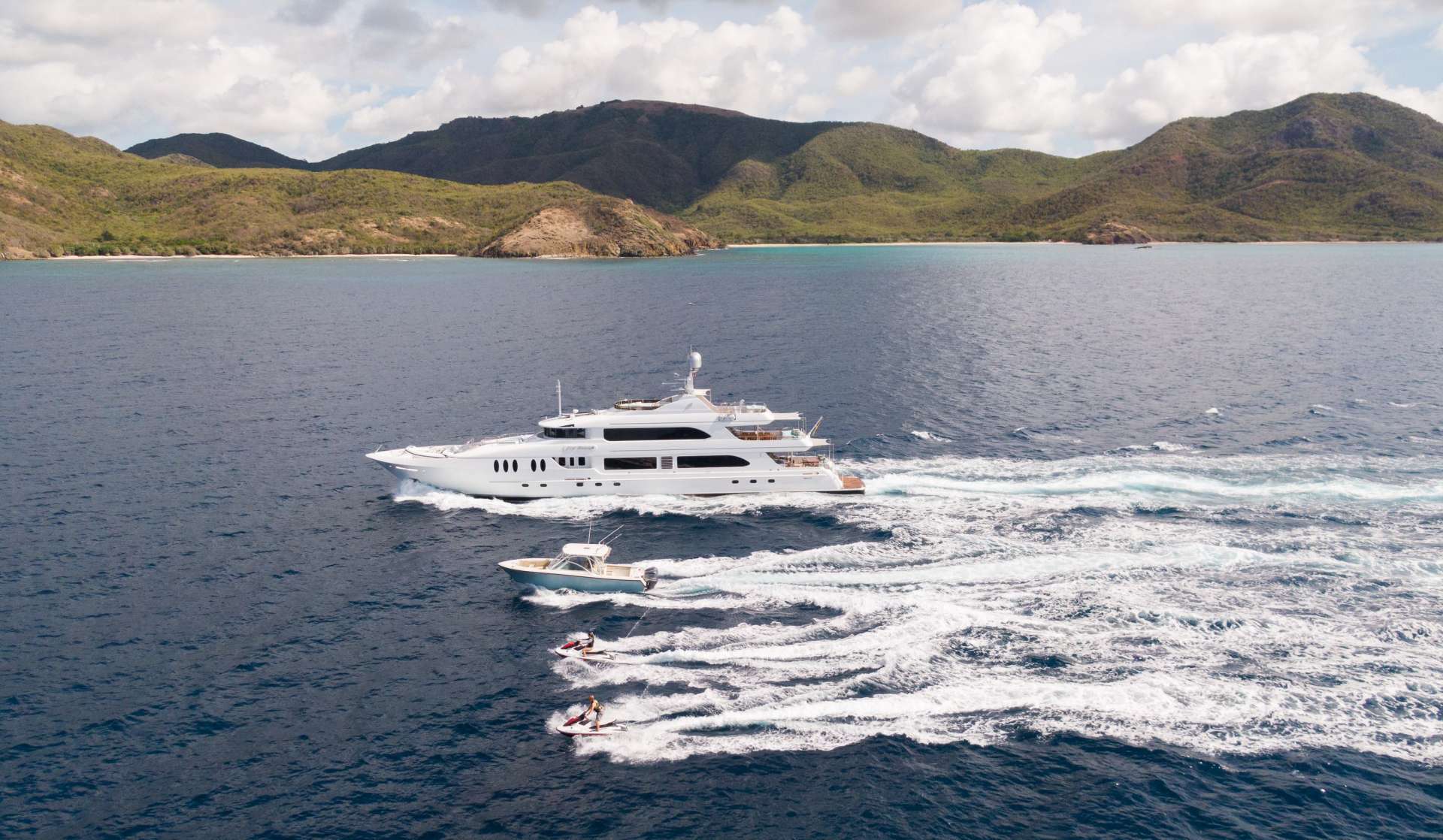 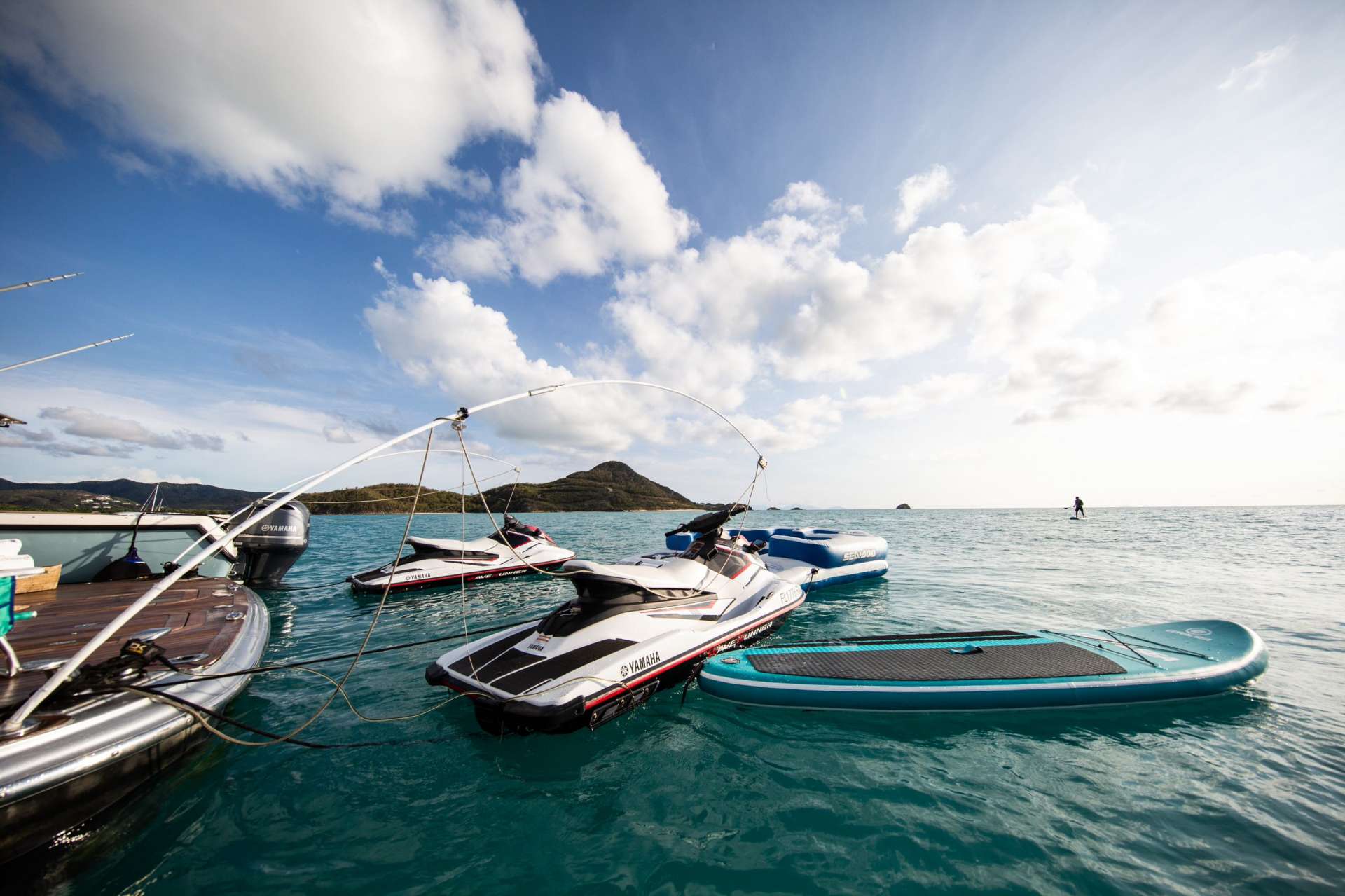 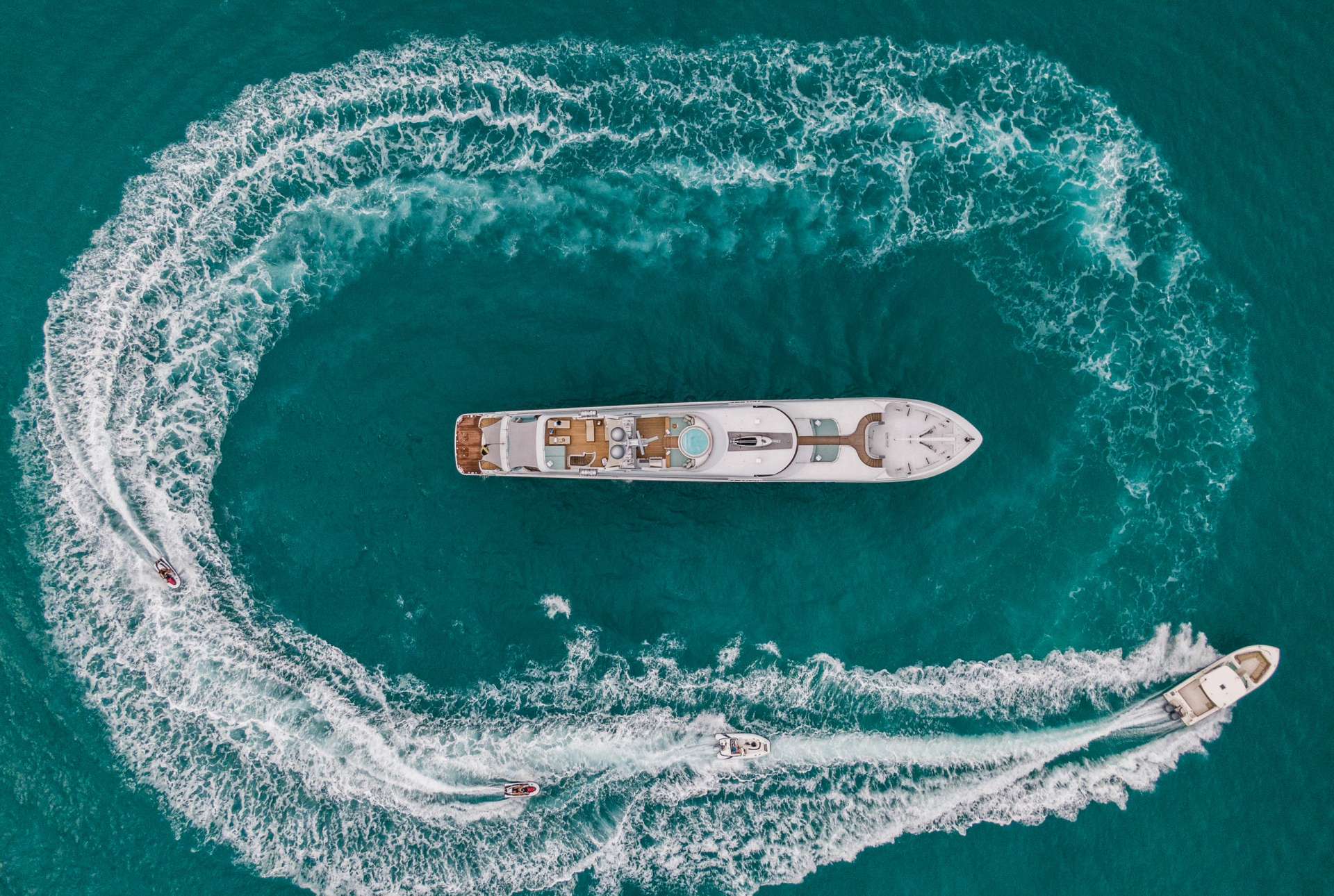 The Galley is accessed to port of the formal dining area and features a stew pantry/ service area.

Bridge Deck:
The Sky lounge features a full bar with stool seating, game table, corner sofa arrangement and 55” edge lit LCD TV. Al fresco dining and seating aft provides an alternate setting to the formal dining below while further aft of this is a perfect cocktail seating area. Up another level on the Sun Deck with Jacuzzi and sun loungers.

Foredeck:
Entering the foredeck via the forward bridge area are two large sun beds to port and starboard – this private guest spot is still away from the lower foredeck working area where the smaller jet tender and waverunner are situated.

CAPTAIN: Brandon Washington – American
Joined Summer 2017
Brandon moved to South Florida in the mid 90’s and knew straight away that he would make a career in the yachting industry. Growing up in the Midwest he spent his summers as a member of the Hartwick Huskies Water Show Ski Team performing acts from 4 high pyramids to barefoot and jump stunts. He was able to gain employment on M/Y Solace III, a very busy charter yacht at the time cruising through the Florida Keys and Bahamas.
While employed as a project manager in a shipyard, he returned to sea on M/Y Our Way where he continued to grow and become a successful charter boat Captain on M/Y da Bubba and the 37m Palmer Johnson M/Y TEMPTATION an extremely successful charter yacht.
Navigation experience includes Caribbean, Bahamas, Trans-Atlantic Crossing, Florida Keys,and Southeast Coast of USA.
Captain Brandon welcomes you onboard M/Y Just Enough for the vacation of a lifetime ensuring that your experience while onboard will be a safe and enjoyable one. He leads a strong crew that is eager to assist and ensure the best vacation possible.
Hobbies include: Motor sports and music and he holds a PADI Open Water Certificate Languages: English

CHEF: Terry Gatewood – American
Joined Summer 2018
Terry a trained chef took steps toward his dream career early in life and once he graduated, he went about gaining experience in various high-end restaurants and luxury hotels.
In 2011 he came across the opportunity to take his passion to the sea and joined M/Y Flawless III, where the 2 years he spent on board he travelled over 6,000 nautical miles,
this experience, together with many others since, have left Terry with a forever growing culinary repertoire and today he is proud of his professionalism and his fluidity of style.
Terry is a highly organised, creative thinker and has the ease and confidence to also accommodate special dietary requirements such as vegan, vegetarian, paleo, gluten free and macrobiotic.
Previous Yachts: M/Y Flawless III (116ft), M/Y Temptation (123ft)
Languages: English, Spanish

CHIEF STEWARDESS: Ashley Ray – British
Joined Spring 2019
Ashley has previous experience in event management, high-end hospitality and childcare, when she decided to make a splash into yachting her background was a smooth amalgamation. After a few of short-term contracts on various yachts gathering experience in different departments including deck, laundry and (crew) cook, Ashley decided that the interior was where she was happiest. Step by step she has pursued her destiny and is thrilled to join the vibrant crew on M/Y Just Enough for the busy season ahead.
Talented in all areas, Ashley is a qualified yoga instructor, holds a personal alcohol license and when spare time permits, she won’t miss the chance to get out paddle or wake boarding, she also loves kickboxing, painting, travel and photography. Joined Spring 2019, Previous Yachts: M/Y Huntress (60m), M/Y Illusion (55m), M/Y Dilbar (110M), Languages: English

2ND STEWARDESS: Leah Anonsen – American
Joined Winter 2019
Leah’s love for travel and hospitality led her to the yachting industry in 2018. Prior to this she worked as a waitress, a PA to a photographer and as an au pair/housekeeper in Australia. Now Leah has a season in the Mediterranean and Caribbean under her belt and having learned what it takes to be a stewardess on a busy charter yacht she is on her way! Joined Autumn 2019, Previous Yachts: M/Y Robbie Bobby (34m), M/Y M3 (45m), M/Y Take 5 (40m)
Languages: English

3RD STEWARDESS: Catherine Mickal- American
Joined Winter 2019
Since starting out in yachting in 2016, Catherine has gained experience on both charter and private yachts and joins Just Enough with reinforced enthusiasm. Her previous roles in the hospitality industry, provided Catherine with a strong base for the fast pace of yachting and her level headed mind-set handles the general challenges with ease.
Describing herself as “outgoing and upbeat” her hobbies and interests include knitting, antiques and all kinds of outdoor pursuits. Joined Autumn 2019, Previous yachts: MY Boardwalk (164ft/50m) MY Wanderlust (164ft/50m)MY Happiness (100ft/30m) MY Zenith (133ft/41m)

FIRST OFFICER: Kyle Harmon – American
Joined Spring 2019
Kyle flew through the University of Utah, graduating with a Bachelor of Science in Commercial Recreation Management which lay him in perfect alignment for a future in hospitality and tourism which he pursued for 10 years.
Over time his focus started to stray and he found himself dreaming of his first love – the sea. From the moment he discovered the yachting industry and the opportunities that awaited him, Kyle threw himself towards this direction, enrolled in the necessary courses and before long landed himself his first job onboard M/Y Good Times, where he experienced cruising from Chicago and the Great Lakes. Since then Kyle has gained experience in all areas and met his “sweetheart” with whom he loves working alongside. Joined Spring 2019, Previous Yachts: M/Y Good Times, M/Y Plane to See, M/Y Insignia, Languages: English

CHIEF ENGINEER: Alec Green – South African
Joined Summer 2019
South African born Alec joined the yachting industry in 2016 with three years’ experience as an engineer in various roles. This experience has since been expanded after joining the Grand Mariana fleet where he was the sole engineer for two yachts and the second engineer for a third. Alec’s hardworking mentality has led him to take on additional responsibilities, such as overseeing deck duties. The diversity in his skills shows he’s just adaptable and committed, he will perform to the highest degree.
When Alec is free from his duties he loves to be outdoors and enjoys playing sports. He is especially interested in scuba diving, snorkeling, and adventure sports such as mountain biking and trail running. Joined Summer 2019, , Previous Yachts: M/Y Ares (33m), M/Y Grand Mariana IV (31m), M/Y Mariana V (21M), M/Y Grand Mariana II (42M), Languages: English

BOSUN/ENGINEER: Kristofer Karner – South African/American
Joined Spring 2019
Having dual nationality of South Africa and USA, Kris’s sense of adventure has encouraged him to travel and explore which is the reason he gives for landing in yachting. After completing his education and working for a while in hospitality, he realized it was time to travel and headed to Nepal, China, Cambodia and Vietnam. Kris spent this time volunteering, teaching and working in backpackers establishments before the idea of a career in yachting came to him. Enthusiastic and dynamic, Kris immediately went about researching this route and it wasn’t long before he boarded M/Y Capella C as deckhand and embarked upon an epic crossing from France through the North Sea to the Baltic all the way to Southern Denmark. Now, some 2 years later Kris is very proud of what he has achieved so far and is happy to be part of the M/Y Just Enough crew. Joined Spring 2019, Previous Yachts: M/Y Capella C (60m), M/Y Phoenix2 (91m), M/Y H (43m), Languages: English

DECKHAND / ASSISTANT ENGINEER: Carl Baldwin- Australian
Joined Spring 2019
Growing up on the East Coast of Australia, Carl was born in the water, and every part of the ocean and outdoors is a major passion for him. Holding a love for all board sports in and out of the water from surfing, kite boarding and wakeboarding to skateboarding and snowboarding. Fishing diving, camping and photography of the outdoors also has been a integral part of his upbringing, thus leading him to a career on the open ocean. After finishing high school, Carl took on a carpentry apprenticeship, this lead to a ten year carpentry career, A registered Australian builder, and the successful completion of numerous designer homes. Like all Australian boys dream, Carl set off on a Surf Adventure through Central America. This travel led to a working in Nicaragua as a surf instructor, getting his Rescue Divers qualification In Utila, Honduras, storm prevention and rebuilding (Hurricane Irma) while gaining a basic understanding of Spanish language and culture. Carl started his Yachting Career as a Deck/Carpenter/Watersports instructor In Florida, this lead to a job on M.Y Lady M, which had him busy in Caribbean Season, an Atlantic Crossing, Med season, with numerous yard periods. Previous Yachts: M.Y. Lady M (65m), M.Y. Calliope (50m).