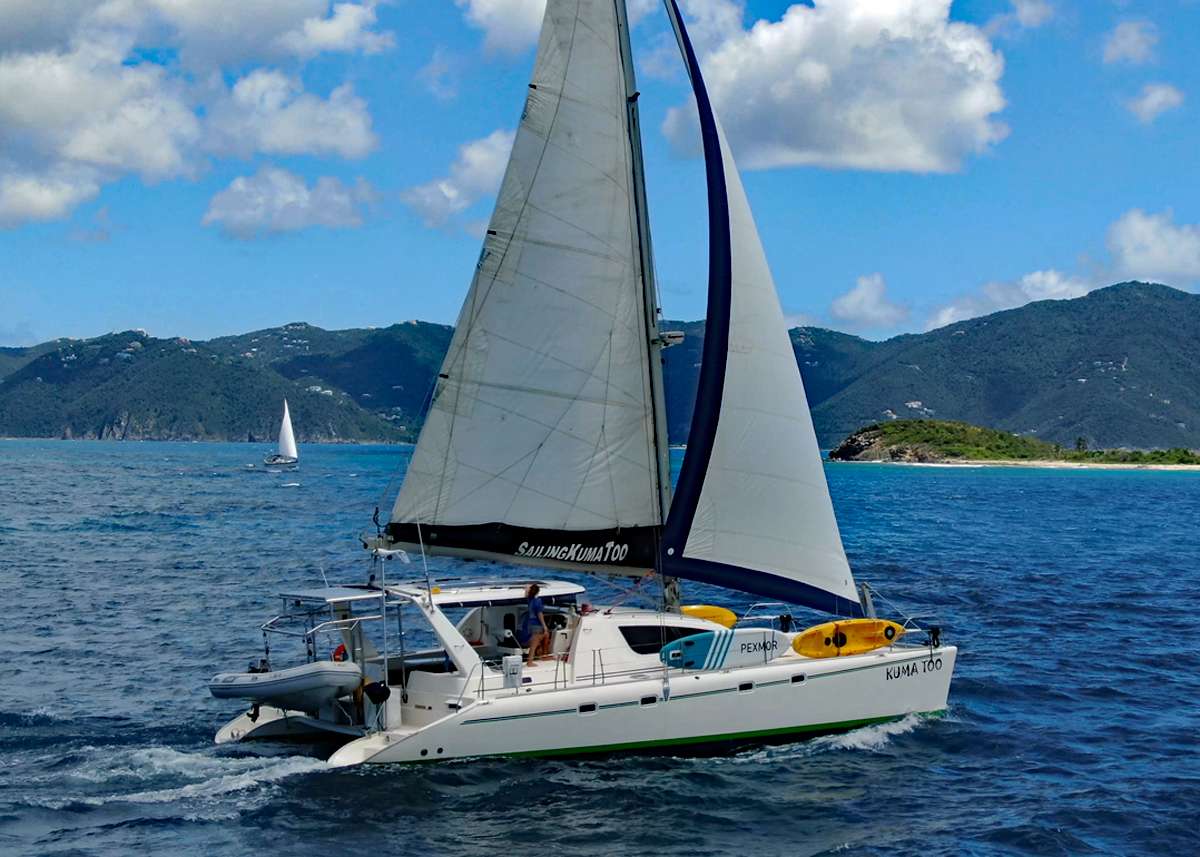 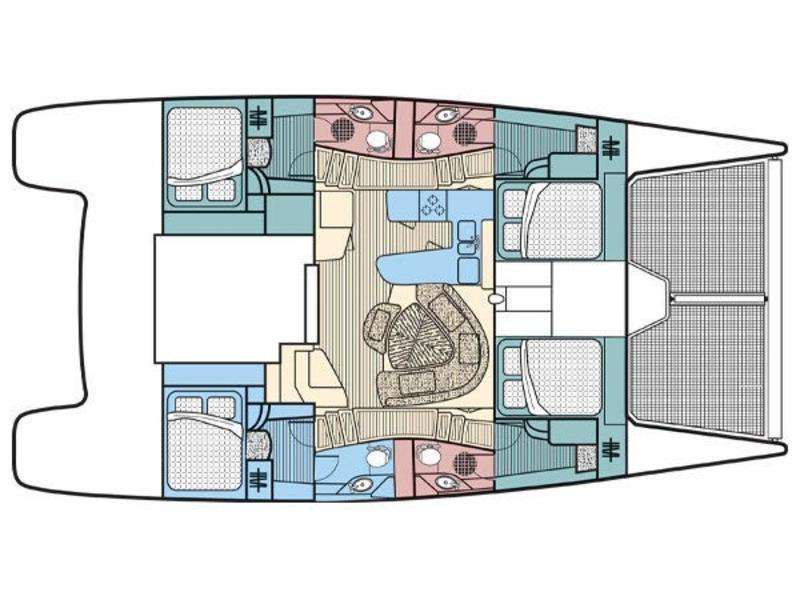 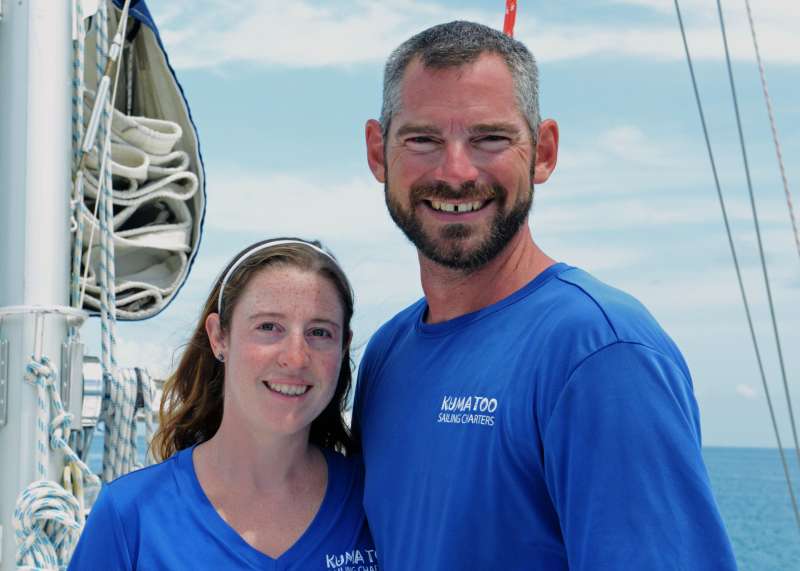 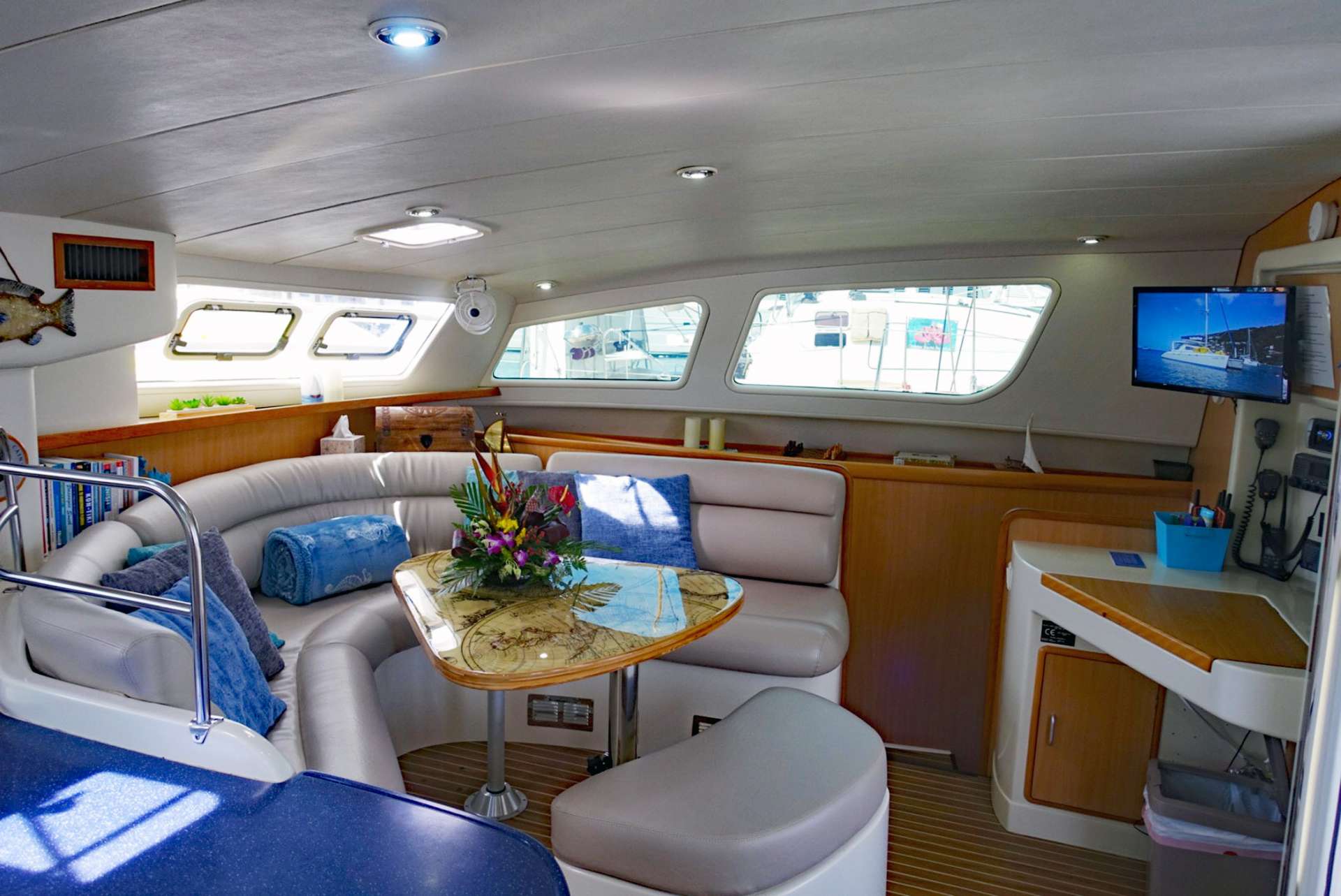 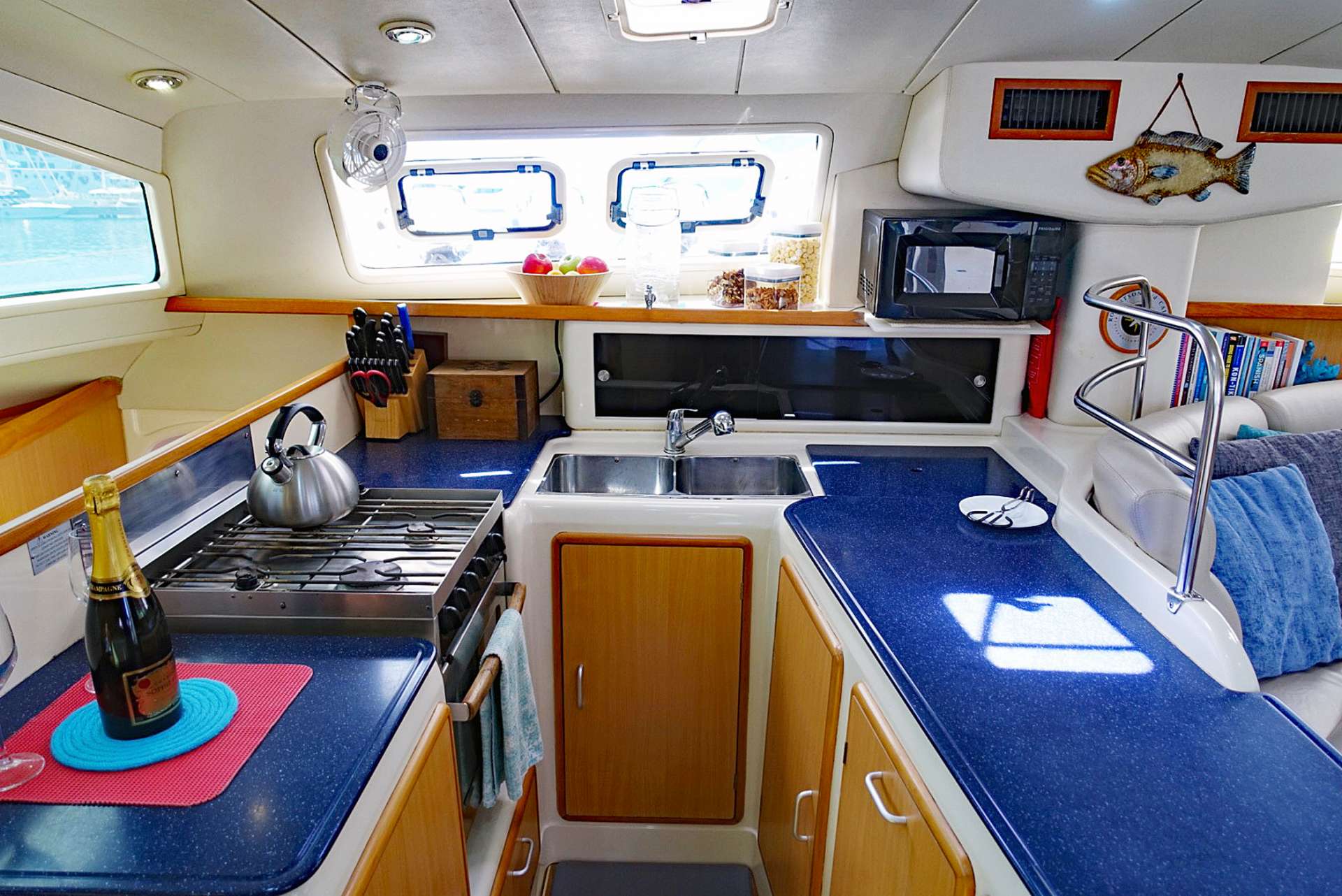 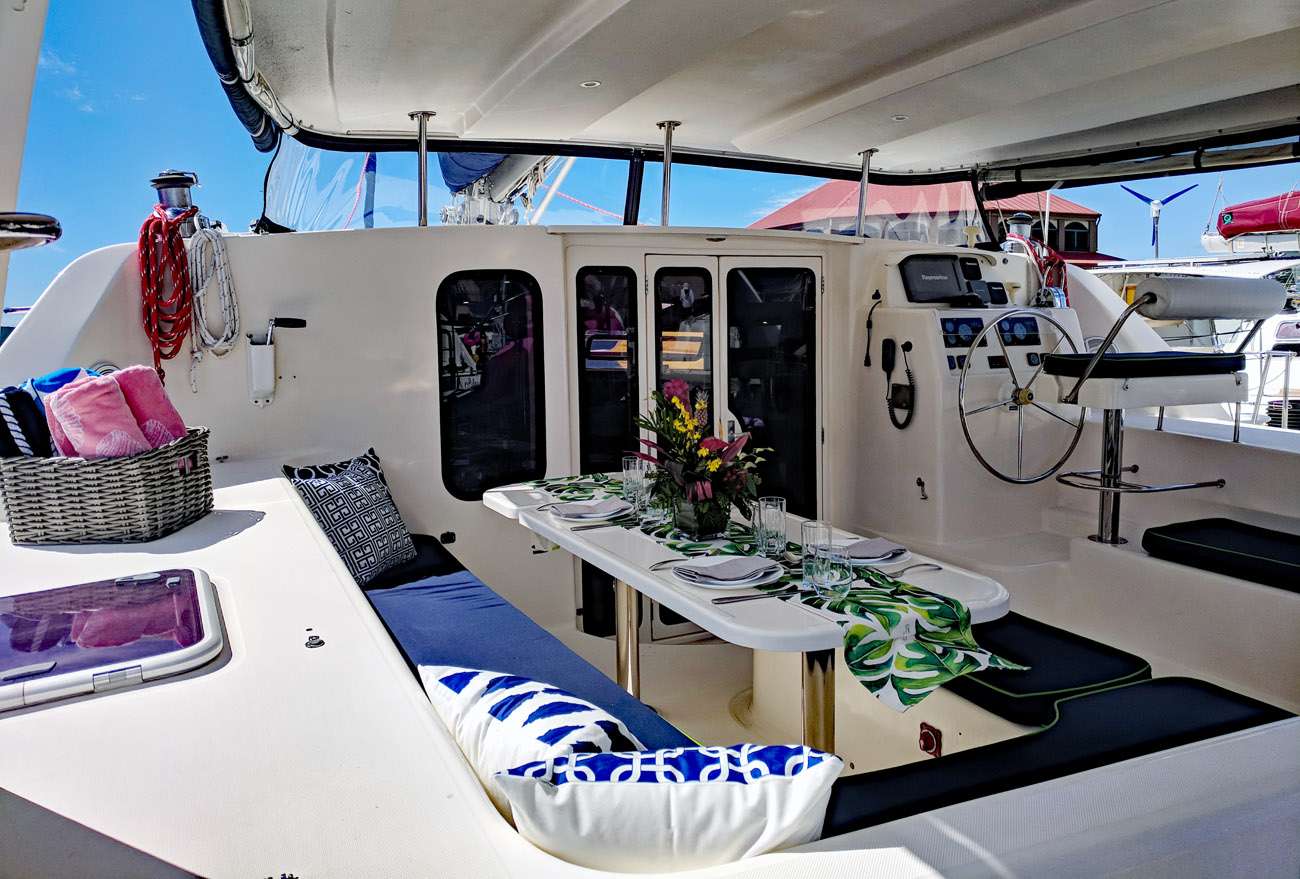 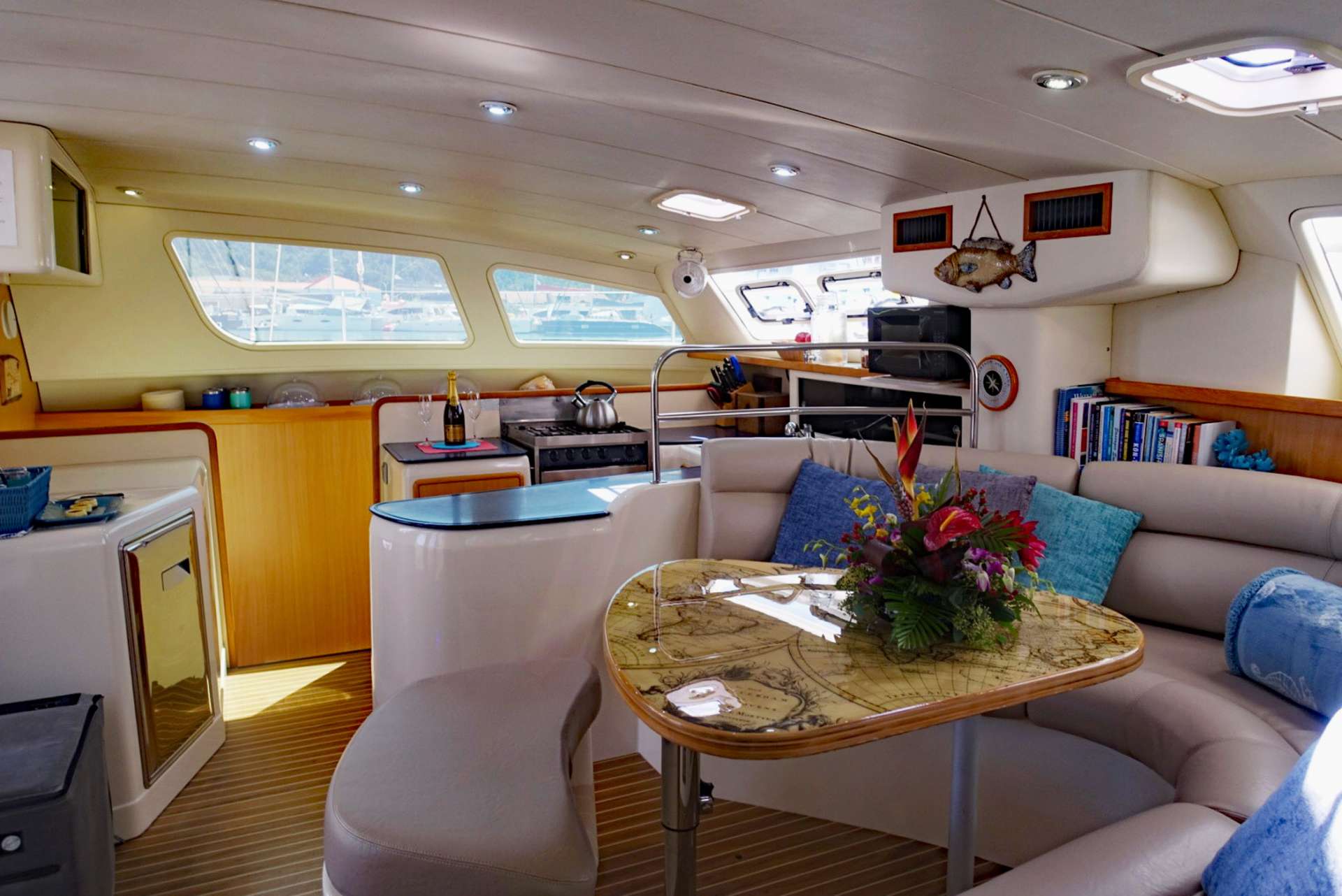 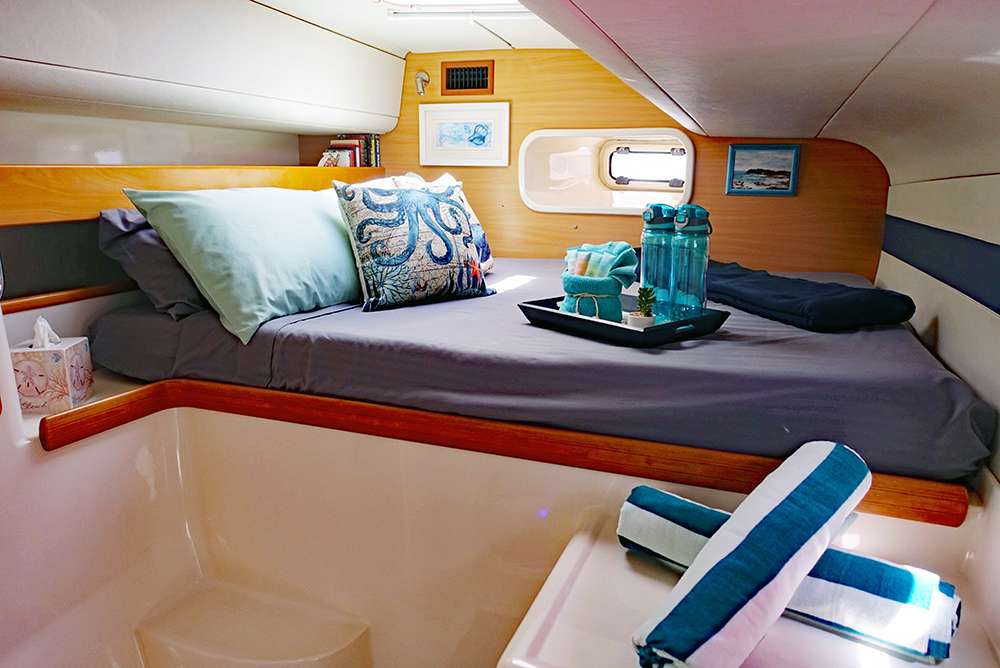 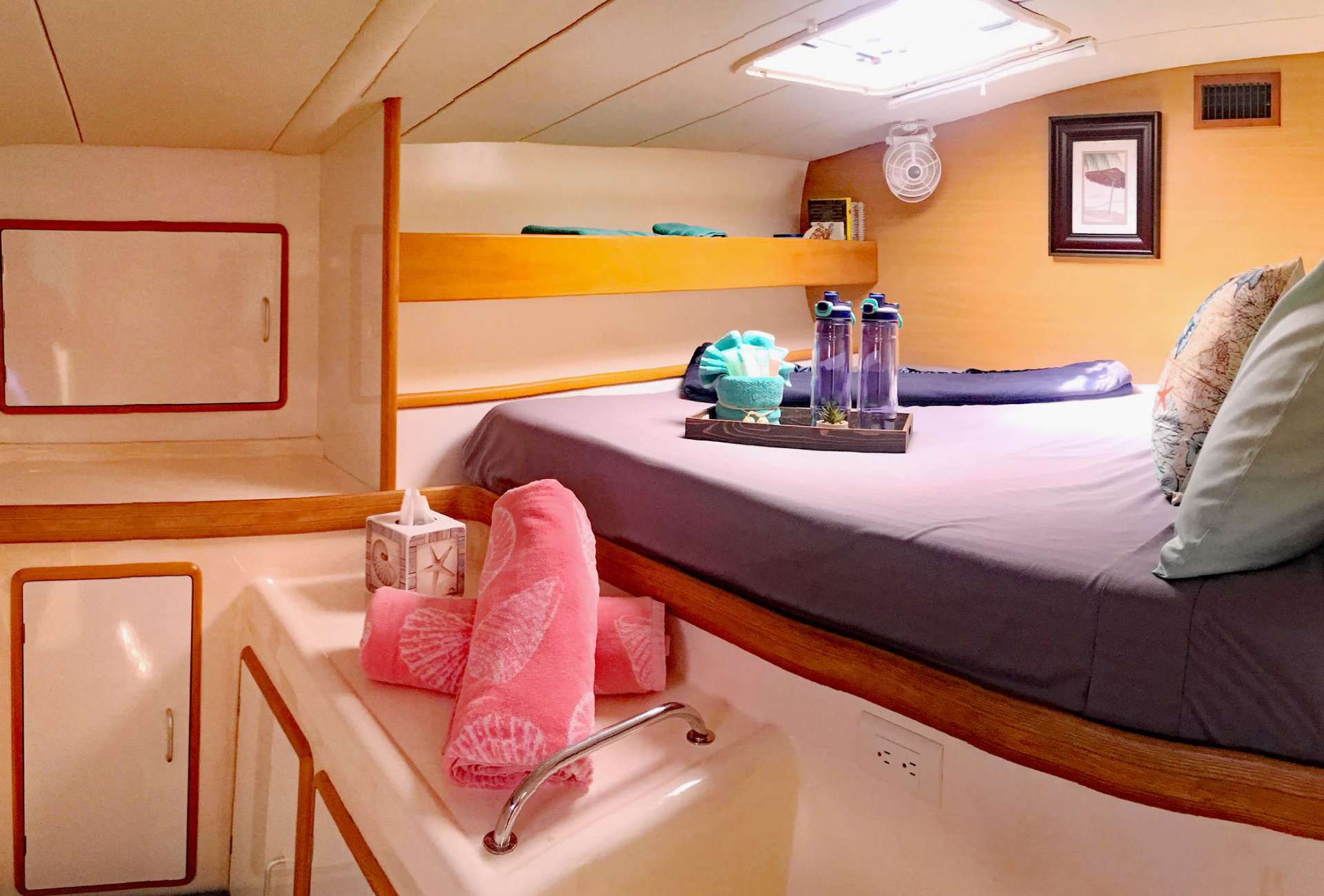 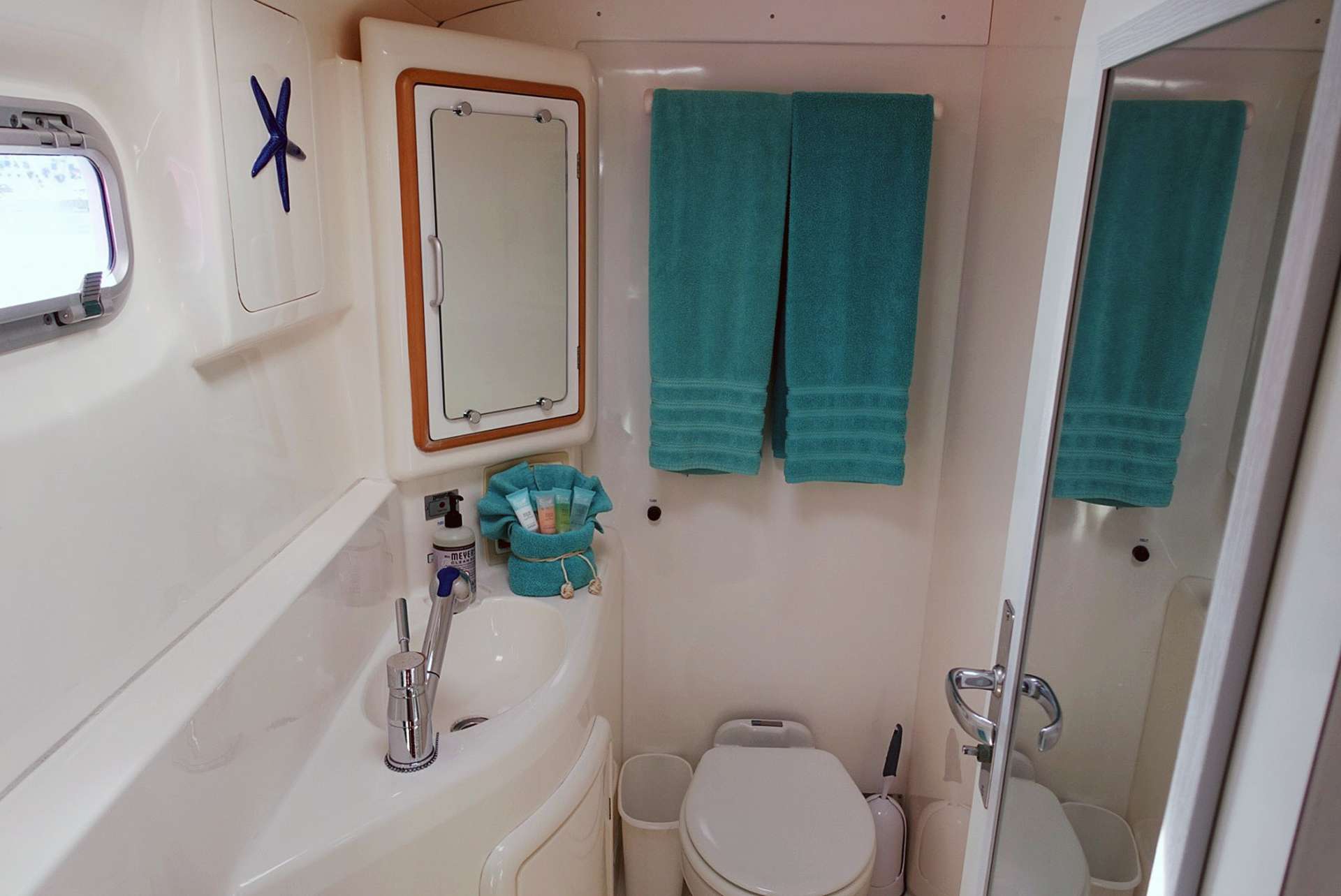 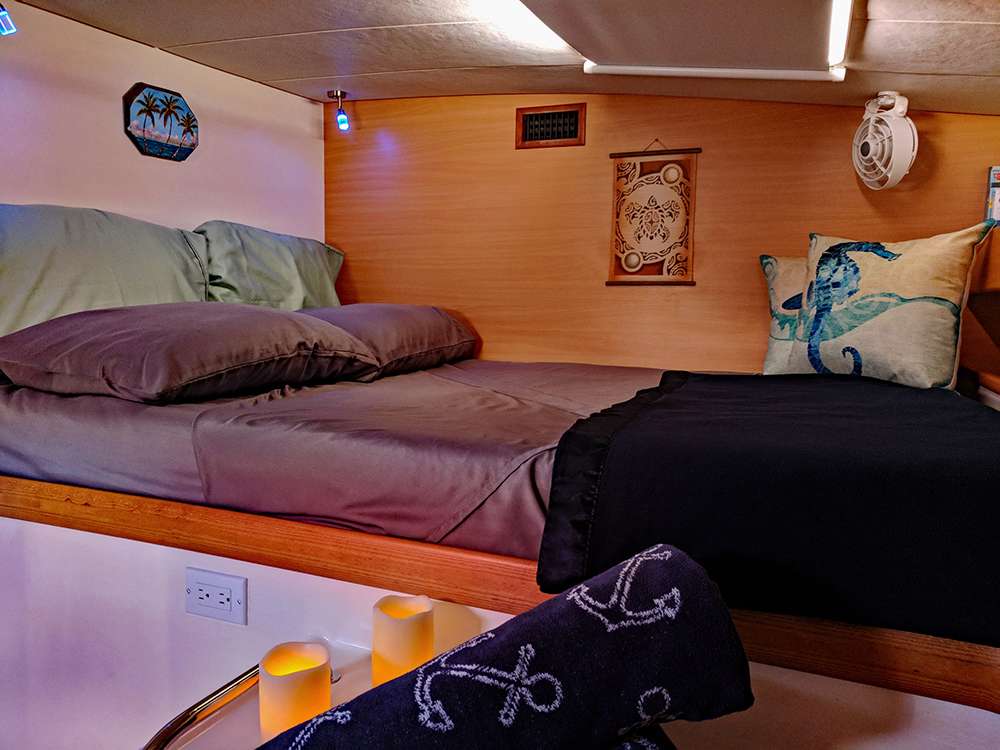 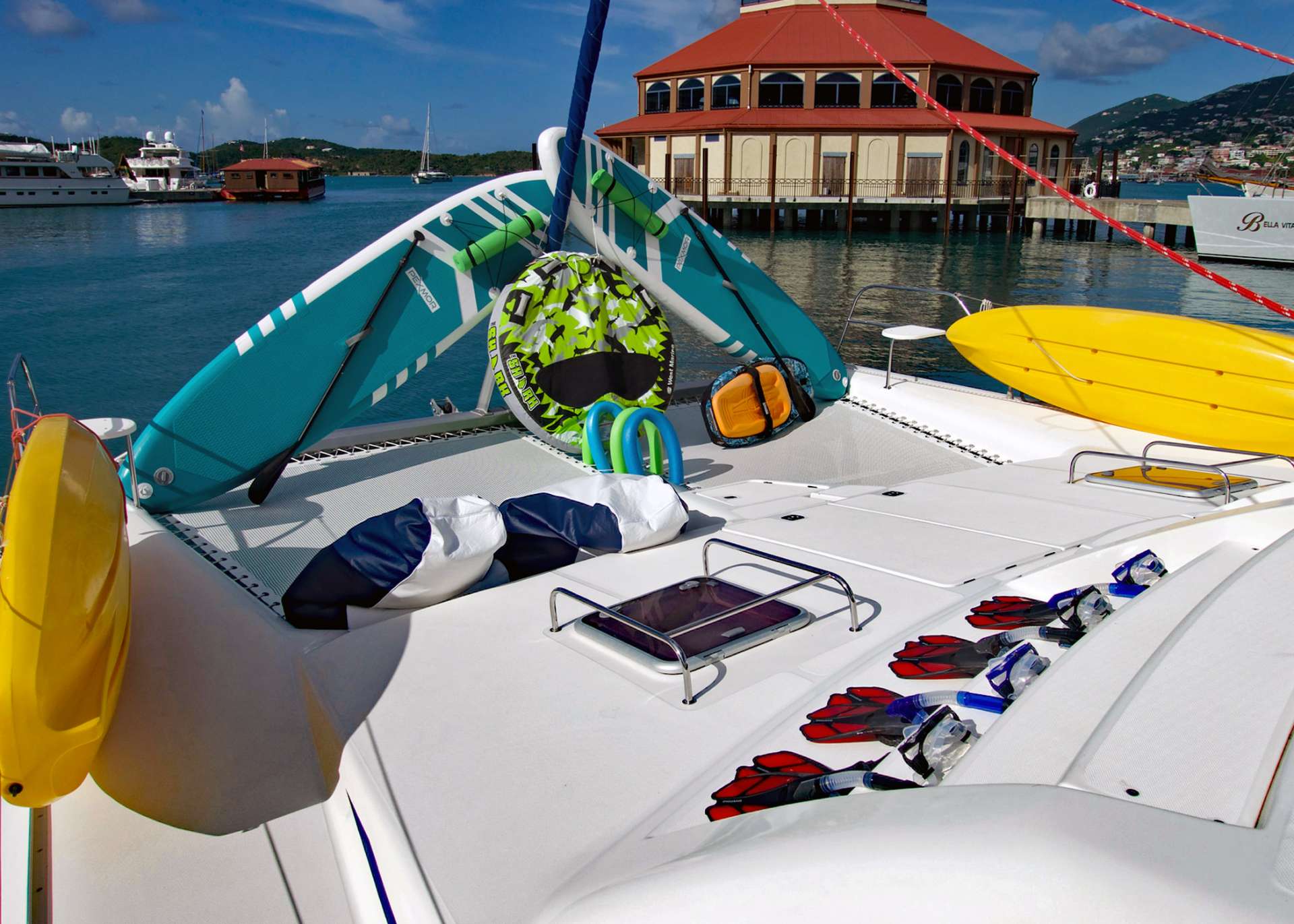 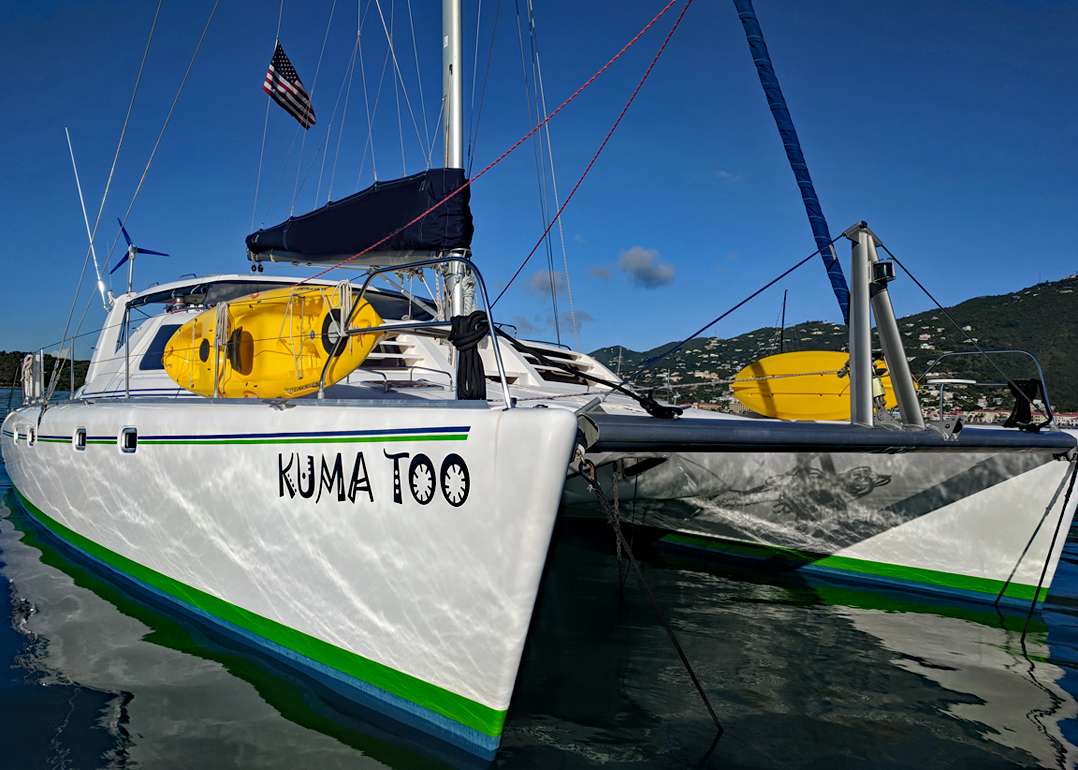 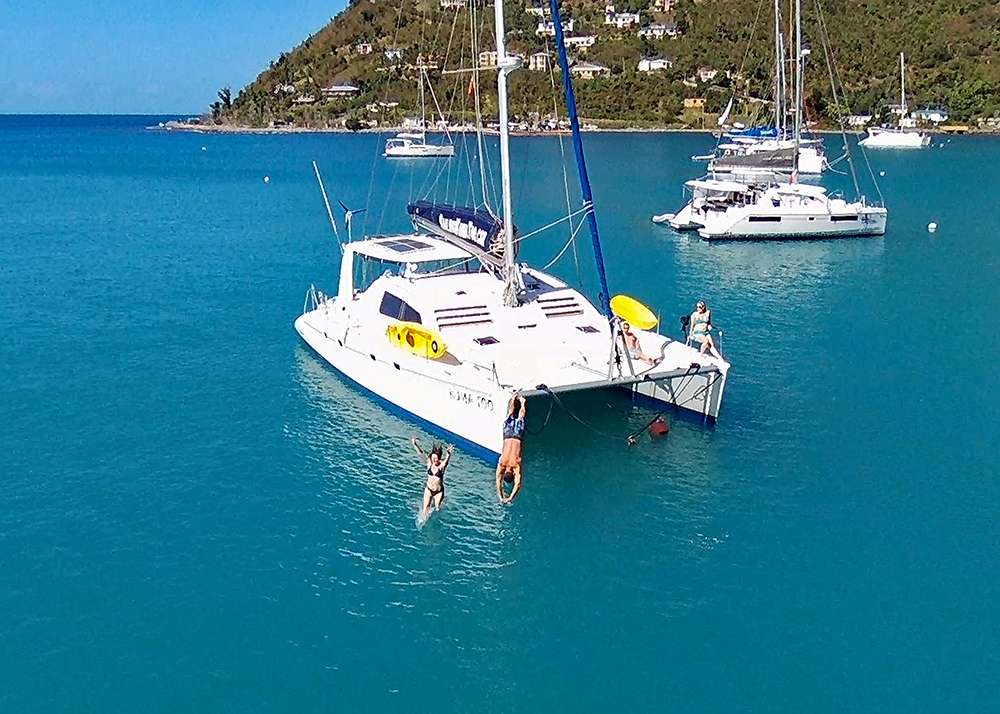 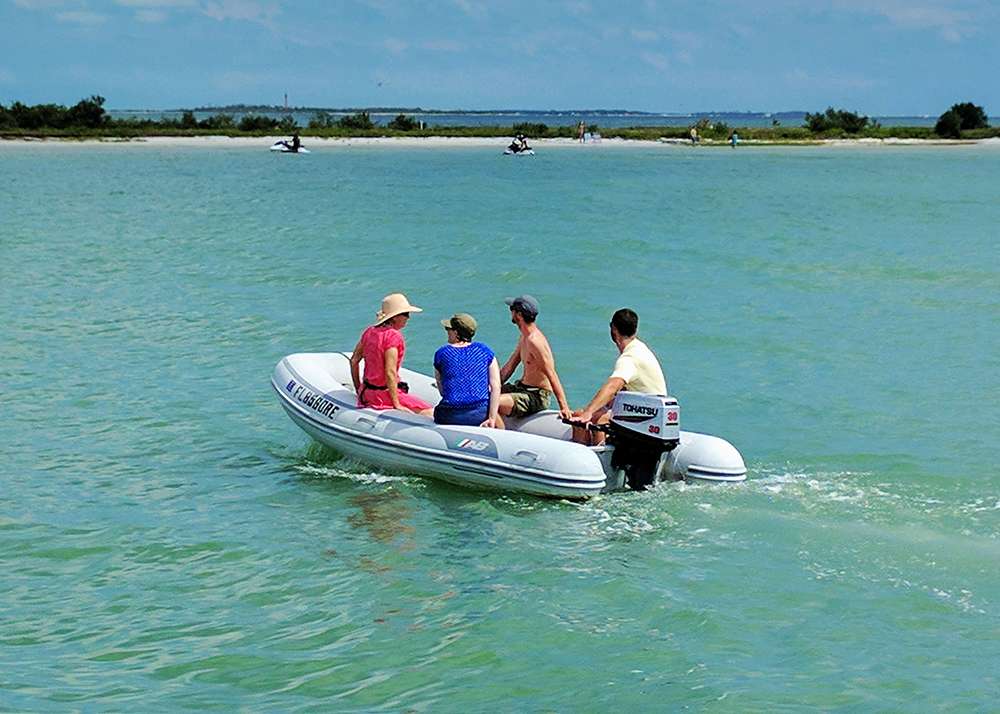 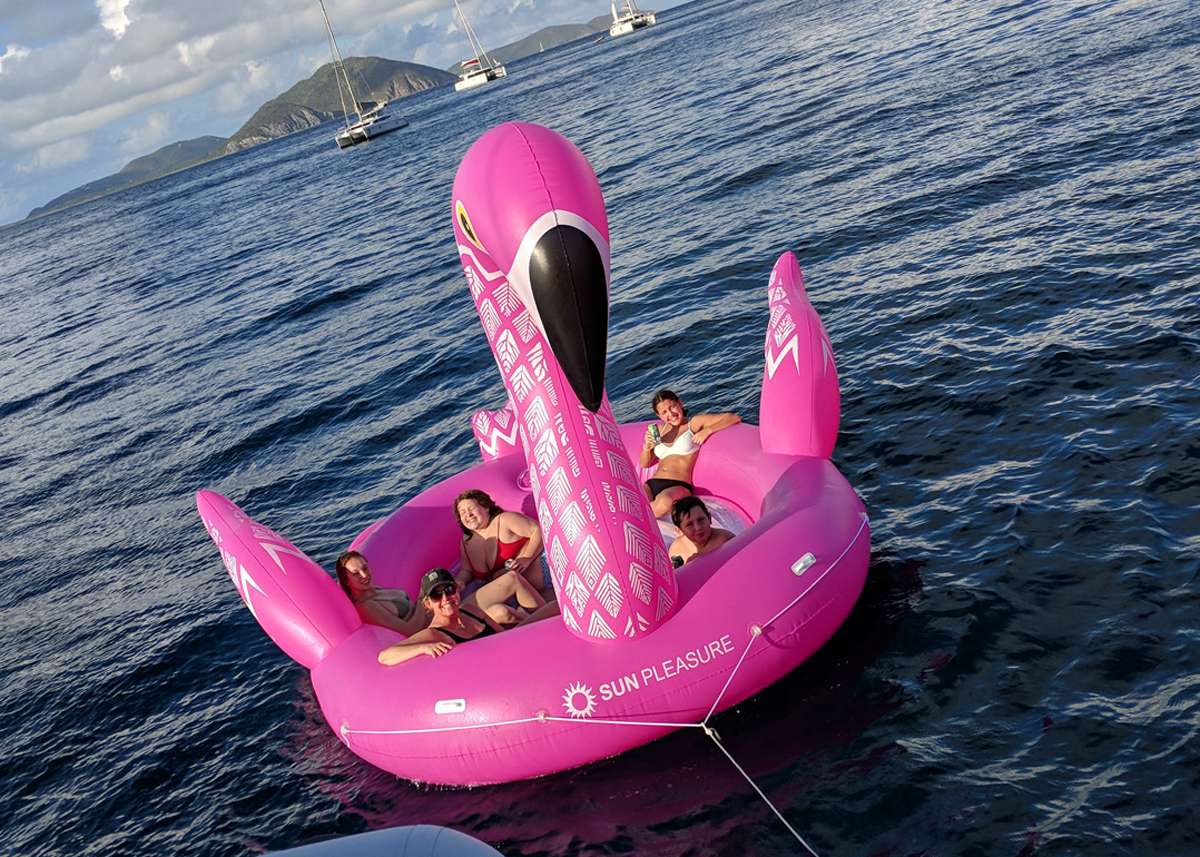 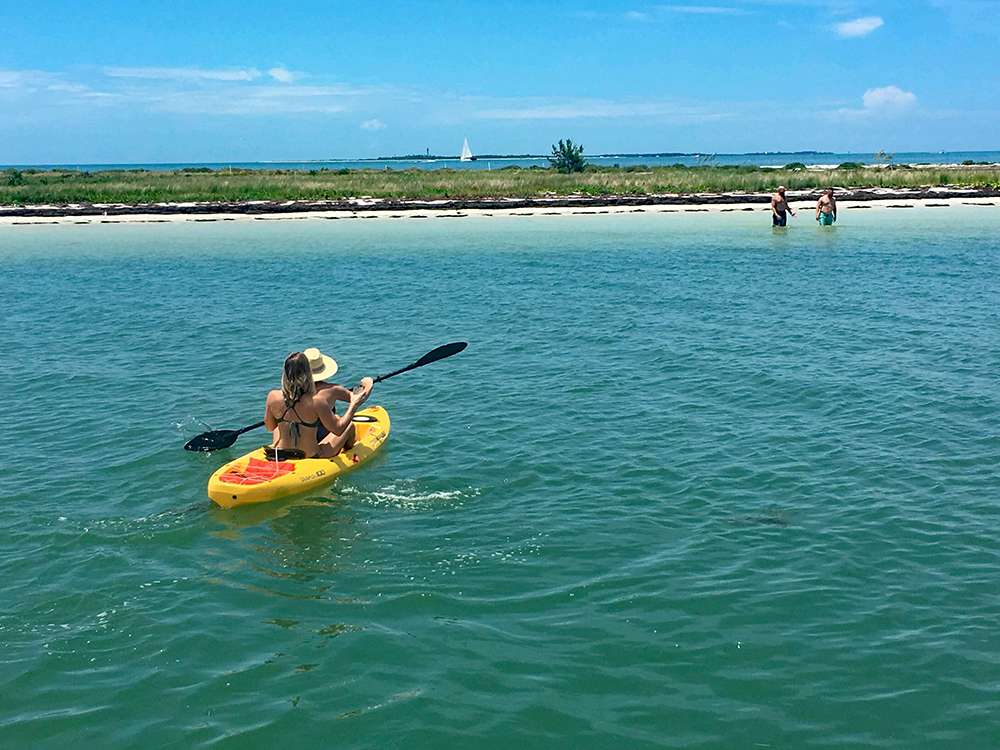 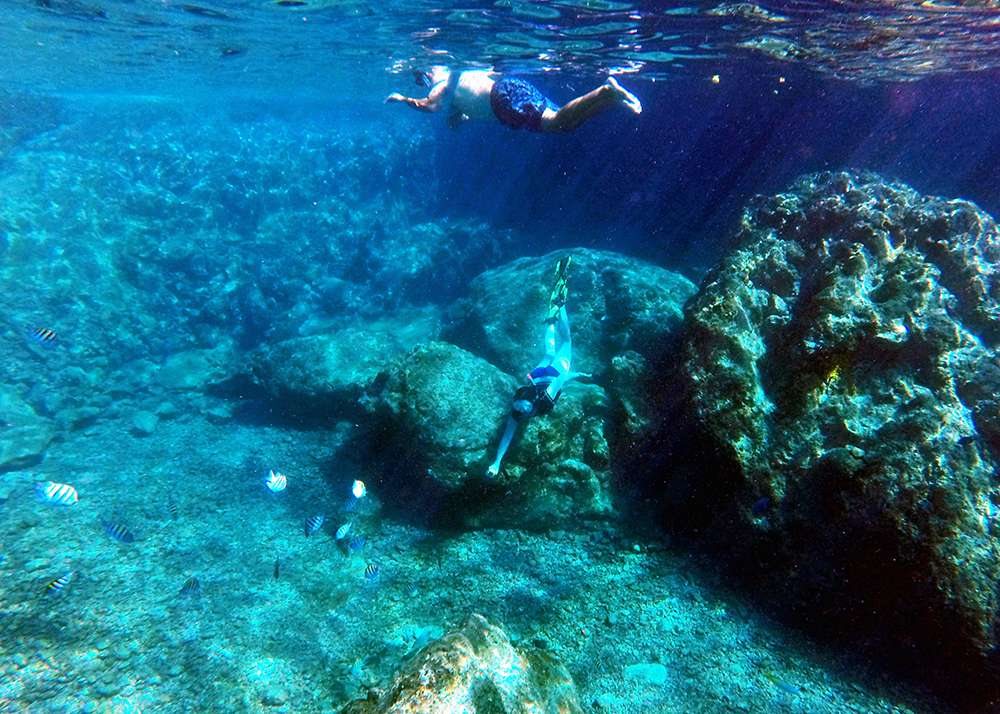 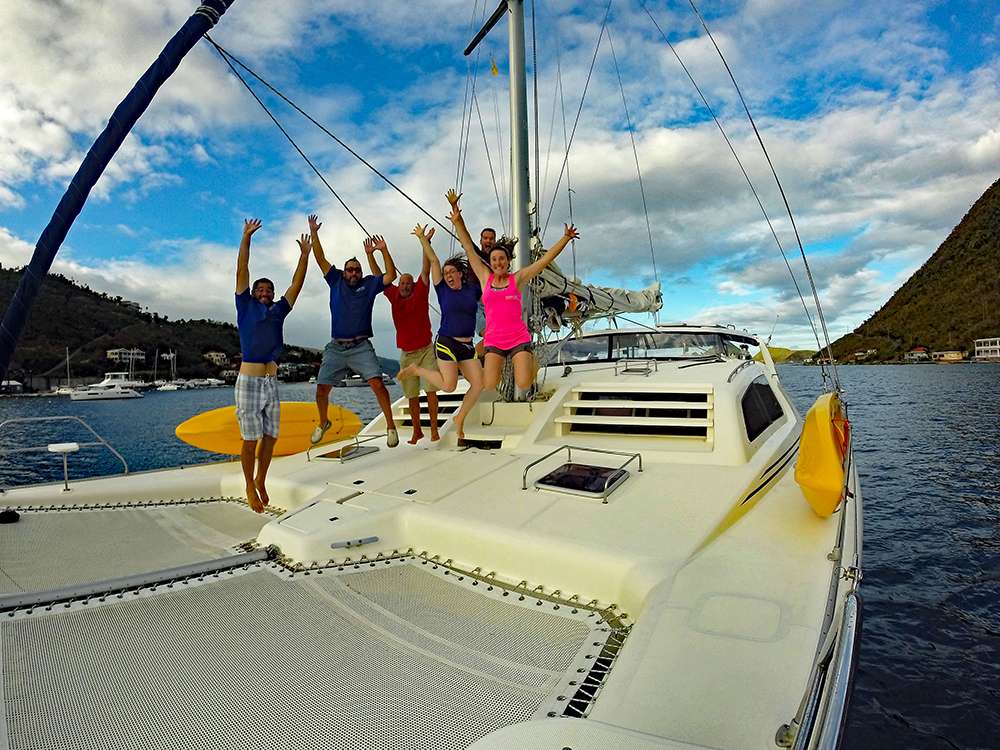 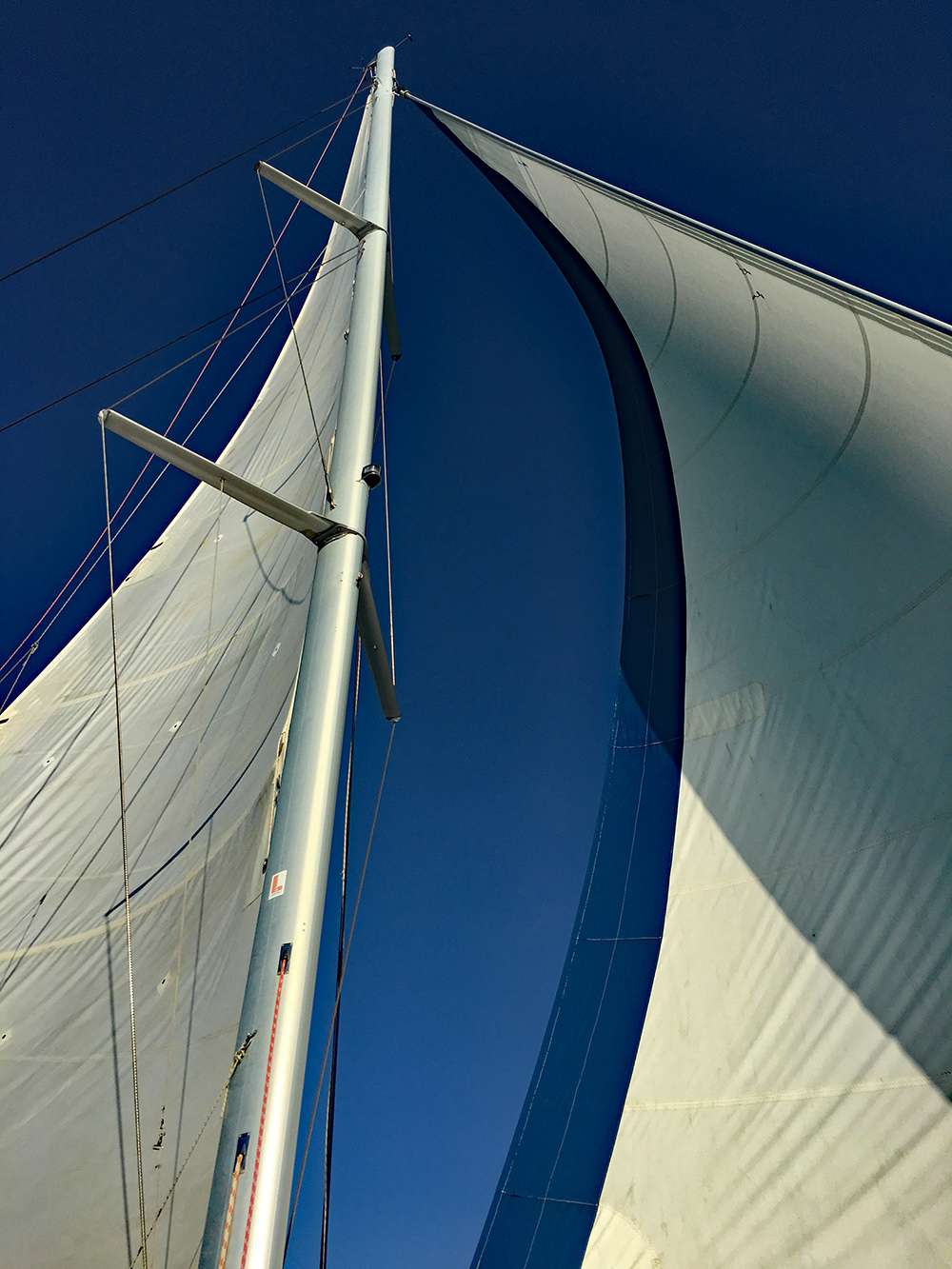 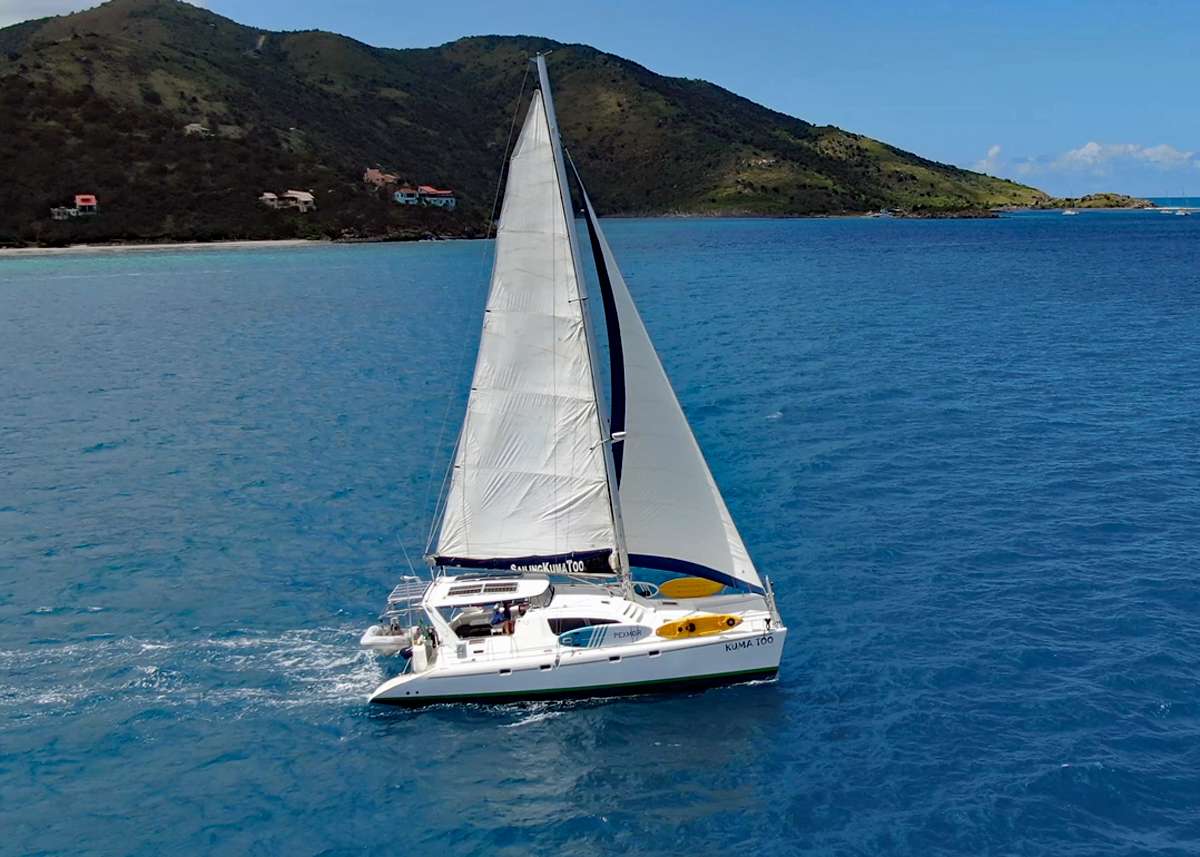 New mattresses are dressed with Oeko-Tex sheets, which means they are certified free of harmful chemicals and are safe for human use.
Bountiful comfy throw pillows for lounging. Hanging closets, ample storage space and shelves for stowing personal items.

Skylights provide sunshine during the day, star-gazing at night and gentle breezes; fans for airflow.

Captain Joe grew up just 3 miles from the US’s top-rated Clearwater Beach enjoying the typical Florida lifestyle of fishing, camping, boating and beachcombing. When he was old enough to breakaway from the Florida coastline he found himself bouncing around the Caribbean from Mexico to the Lesser Antilles in search of crystalline turquoise water several times a year. The sea was always calling him. In 2009, Joe had the opportunity to captain a sailing vessel in a club race and was hooked immediately. In the last 10+ years, he has raced sailboats ranging from 21-feet to 52-feet. Joe says, “The ability to harness wind and wave to get to a destination without the means of mechanical propulsion is intoxicating and rewarding.” He now holds his USCG 100-ton master license with sailing and towing endorsement and his BVI Boatmaster in addition to his STCW, CPR, and first aid certifications.

Always the life of the party, Joe’s infectious laugh can be heard across the room! With the perfect balance of comedic relief and professionalism, it was 2005 when Joe’s wife Mandy first noticed Joe at work because of his ability to lead his staff with high spirits in the most stressful situations. Within a few months, they took their first trip together to Puerto Rico, unknowing what path was laid out for them. Scuba diving (both are certified open-water divers), sailing, and land exploration took them from Alaska to Europe, South America to the South Pacific, but most frequently to Florida’s backyard, the Caribbean. Since music and food are a universal language, you can find Joe and Mandy on the dance floor, at a communal table, or around an acoustic guitarist making conversation with others. To them, the most rewarding part of travel is the people met along the way which turn into life-long friendships.

After years of traveling throughout the Virgin Islands, they married on St. Thomas in 2013. On a 2015 vacation to the British Virgin Islands, Joe and Mandy met a fellow sailor, and the idea hatched of pursuing their own sailing adventure full time. The corporate grind of deadlines and politics was about to be behind them, as Joe and Mandy sold everything, quit their jobs, took command of Kuma Too, and never looked back. They have sailed Kuma Too over 15,000 nautical miles throughout Florida, the Bahamas, Atlantic Ocean, and Caribbean Sea and the meter is still running.

Offering sailing charters along the West Coast of Florida, Joe and Mandy’s love of hosting guests on board Kuma Too grew, and they were ready for the next step. For their 3rd charter season, they headed south to the Virgin Islands! Joe enjoys sharing his love of the sea and sailing with guests, and Mandy looks forward to sharing her love of cuisine!

Growing up landlocked, Mandy has always had an adventurous soul from rock climbing to skydiving and with dreams of traveling the world, even as a child. She began scuba diving with her dad at age 15 which unlocked a whole new world of travel and cuisine! On every trip, she tried new dishes and flavors which would eventually shape her own culinary skills. Bringing global influences into her dishes, Mandy most enjoys creating unique sauces and seasonings. Although Joe is the Captain of Kuma Too, Mandy holds her OUPV Captain’s License, STCW, CPR, and first aid certifications as well and is fully competent in safely handling their 47-foot floating home.

With 15 years in general aviation, both Joe and Mandy have traveled around the US for work, but the Caribbean kept calling. Their unique backgrounds with private and corporate aircraft included not only handling mechanical and fueling matters but also providing superior customer service to affluent passengers. They both have extensive experience coordinating major events at airports along the East Coast such as Nascar, NFL, MLB, NBA, and PGA championship games and yacht shows. Their organized manner and ability to multitask while placing safety above all else was developed over those years but is now a key element for their success in providing a personalized dream sailing vacation aboard Kuma Too.