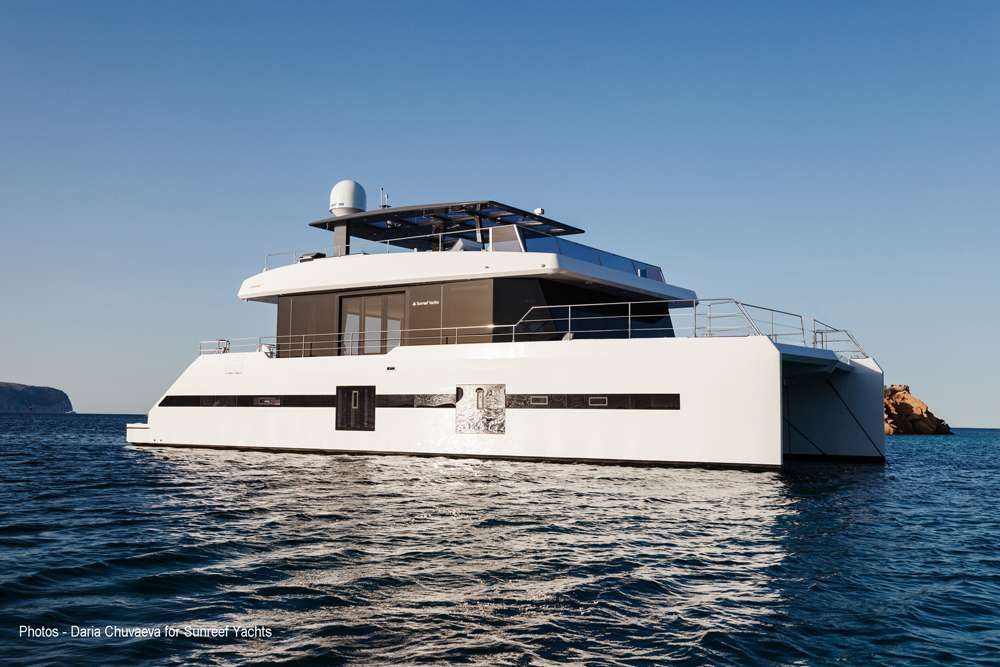 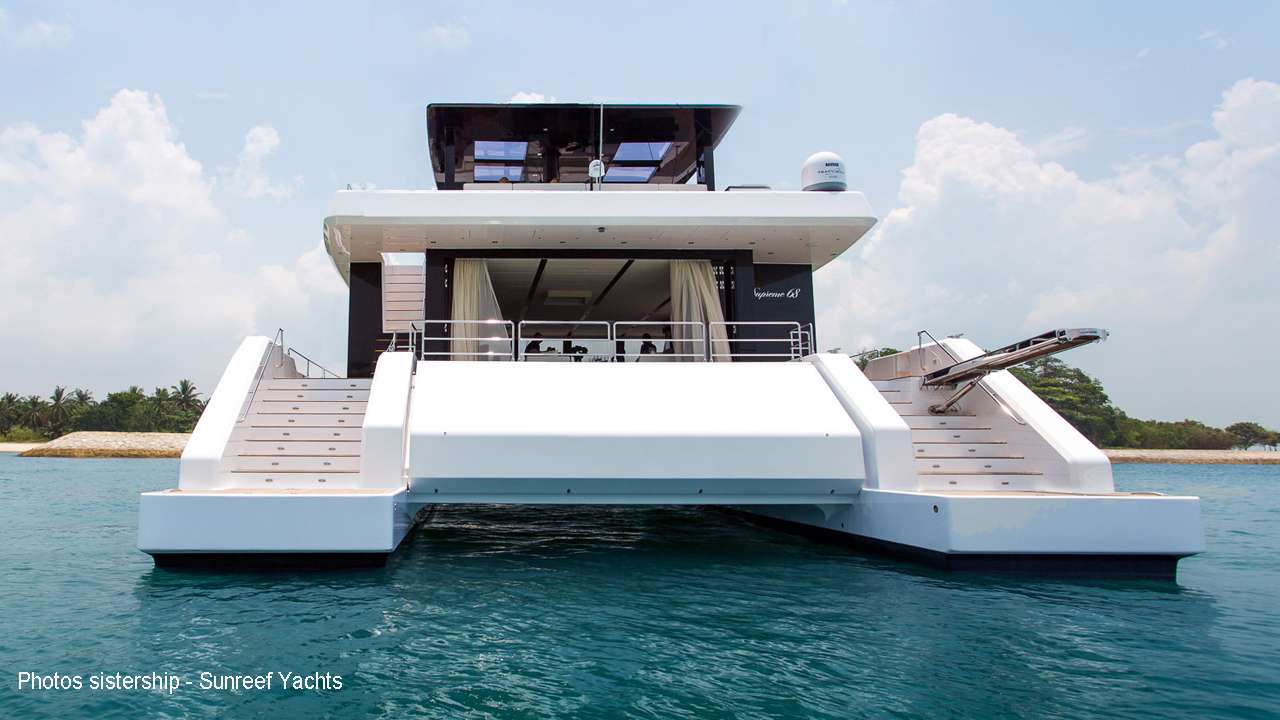 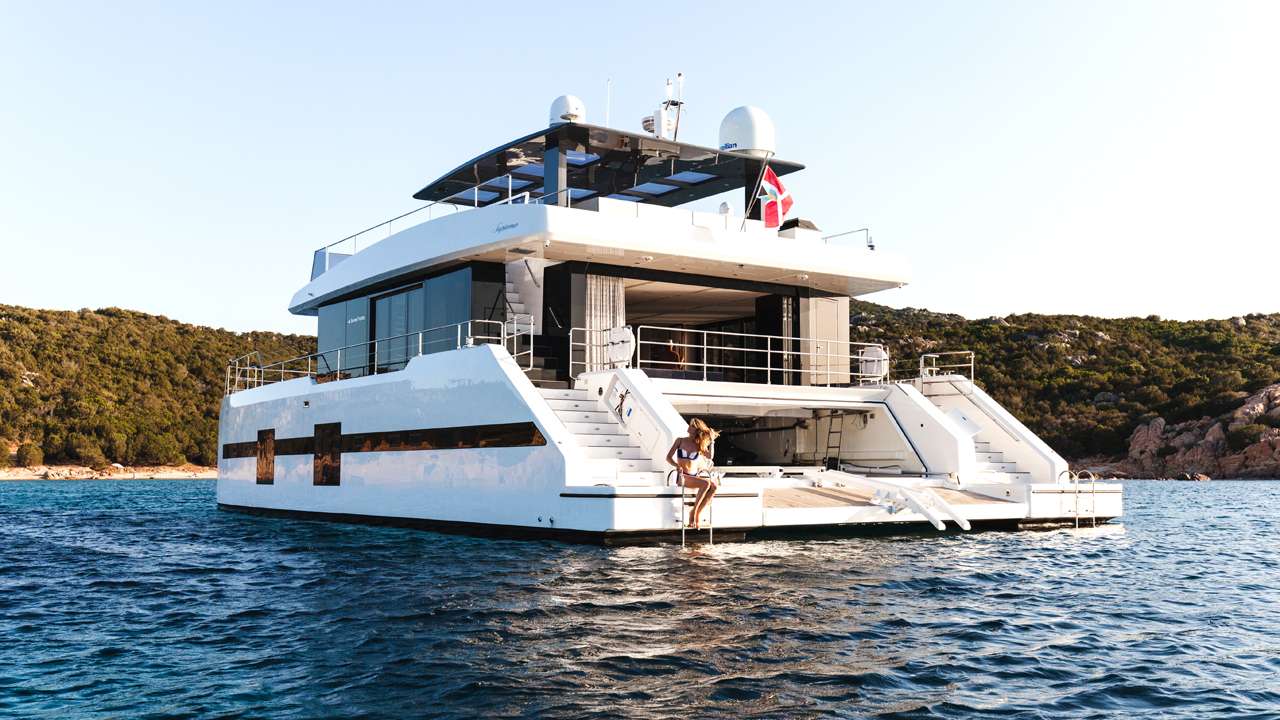 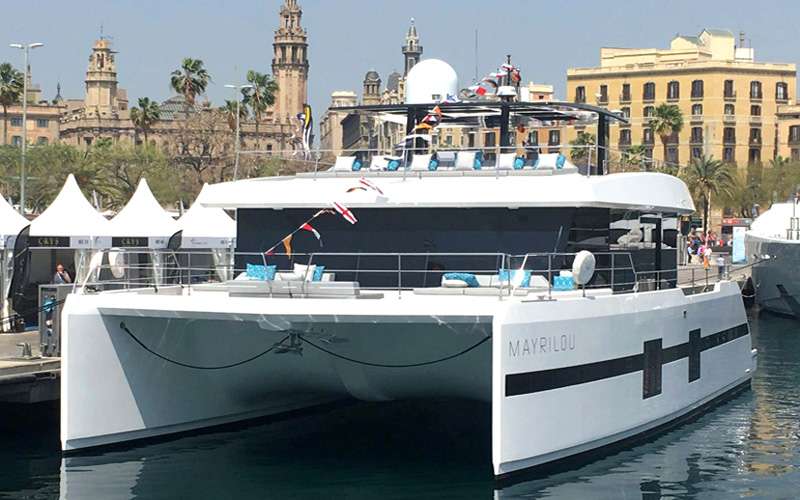 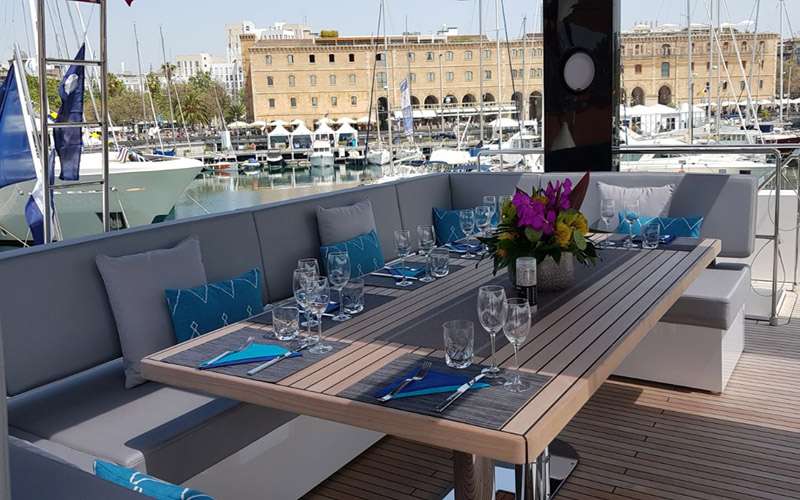 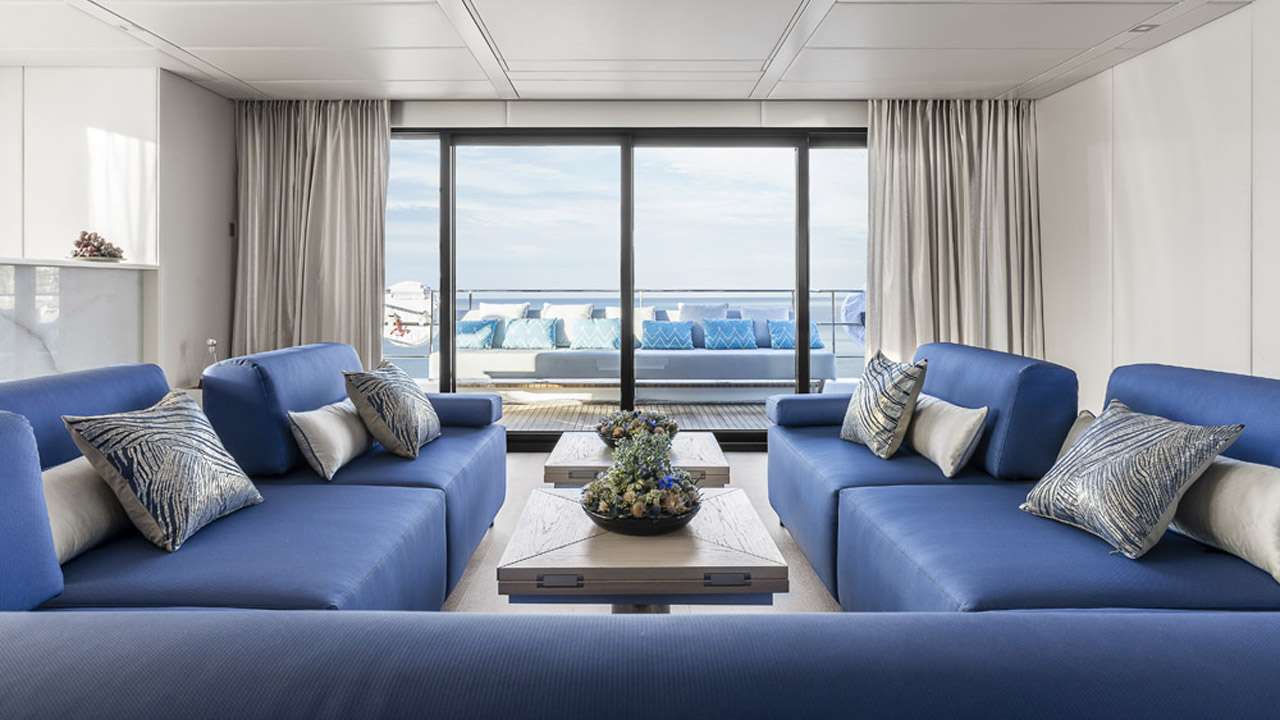 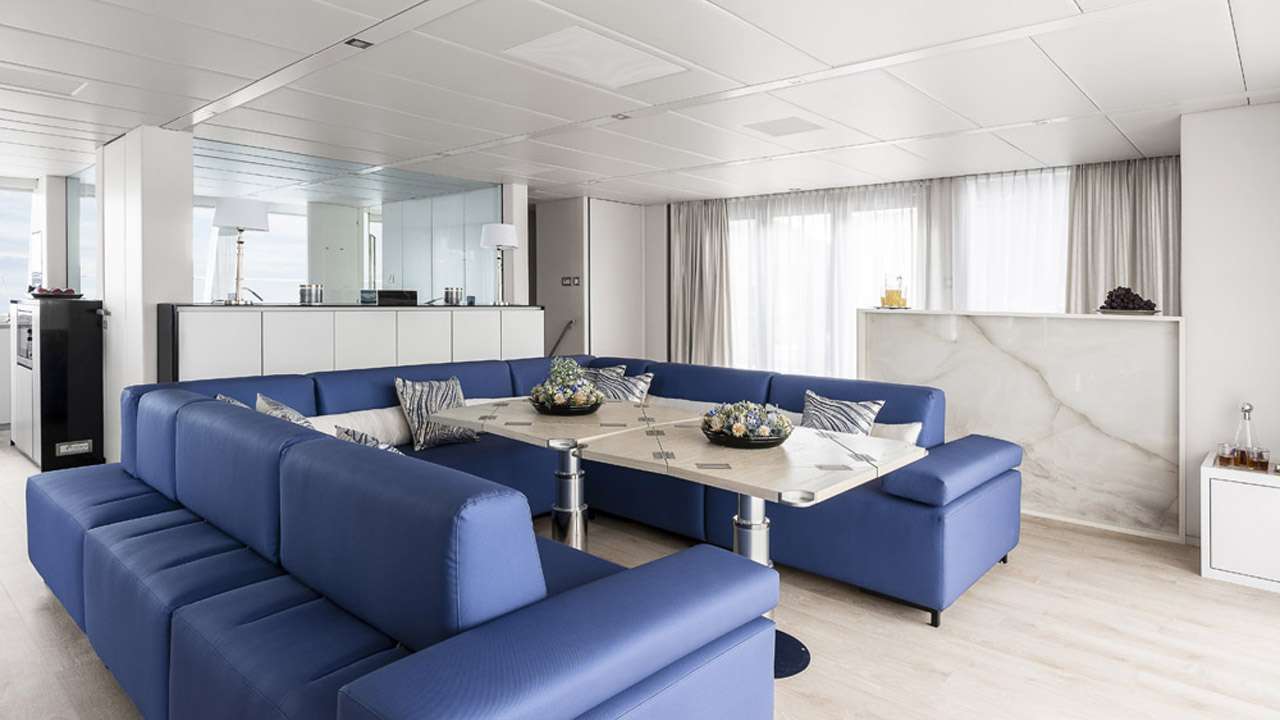 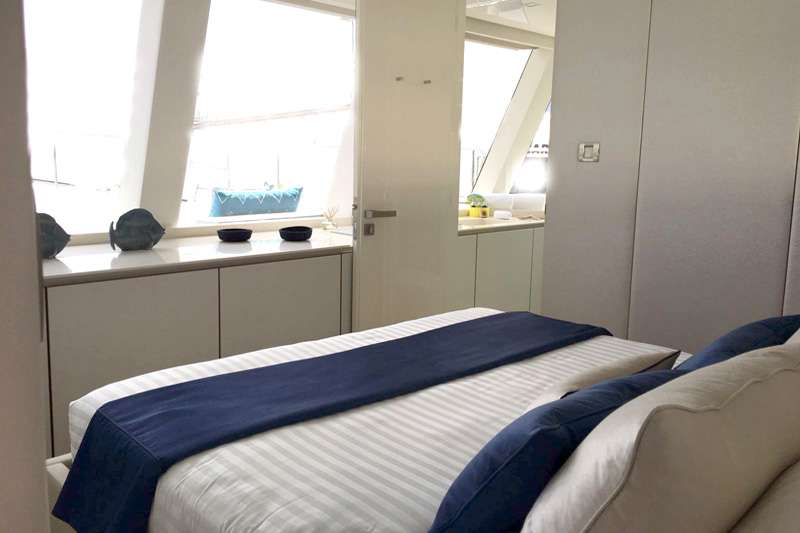 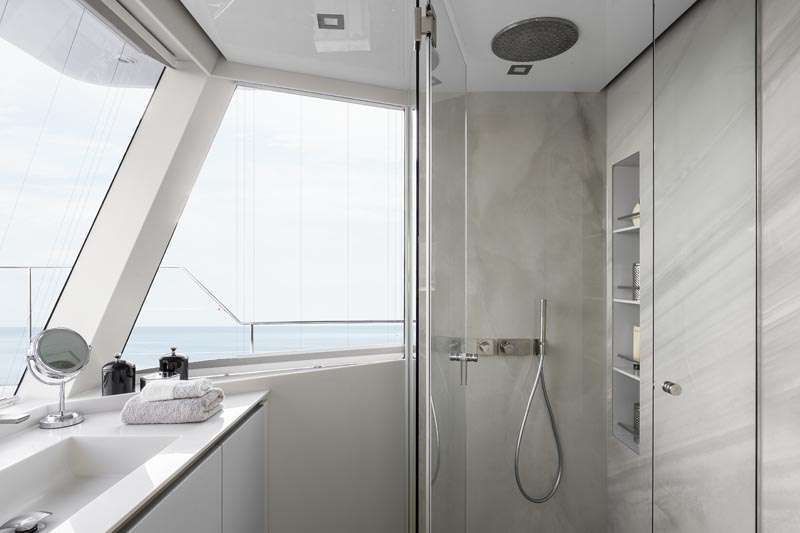 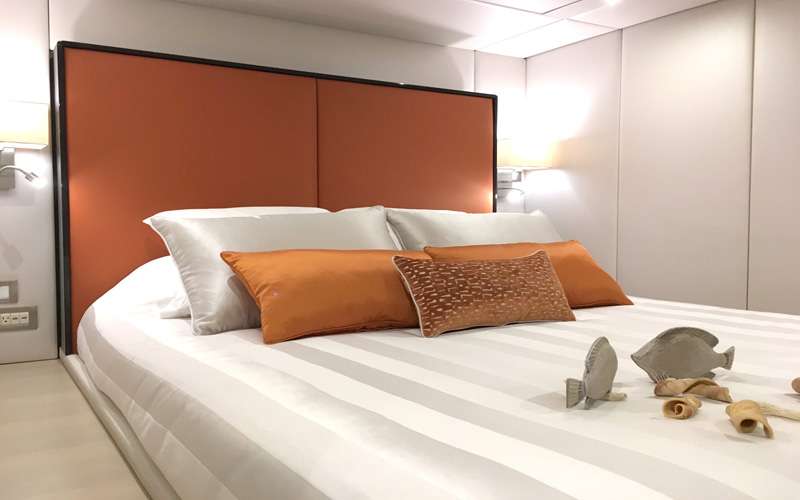 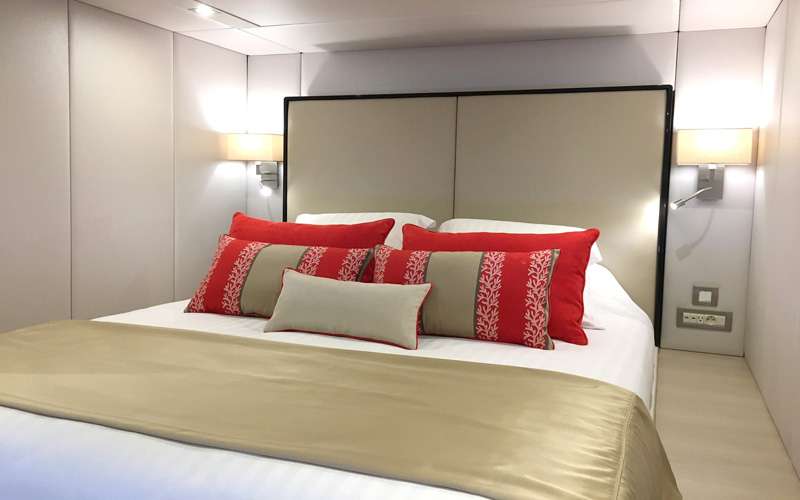 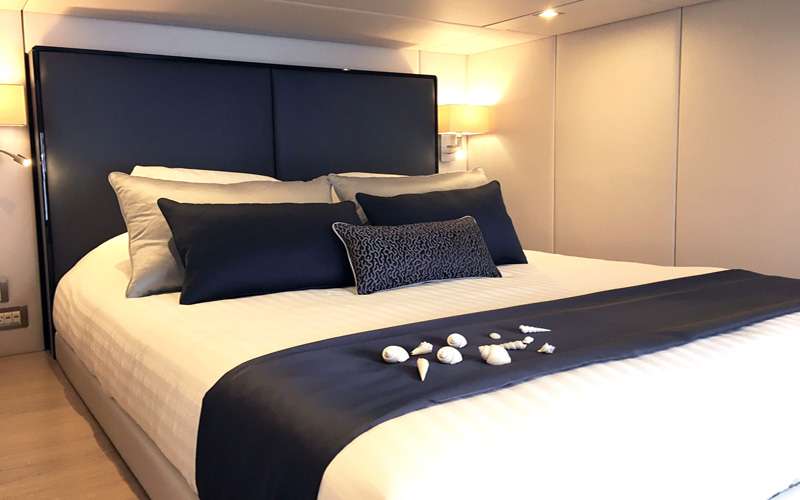 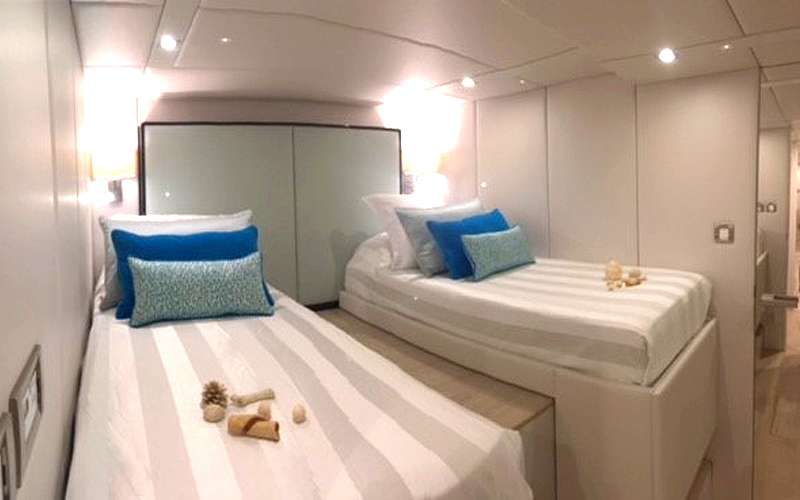 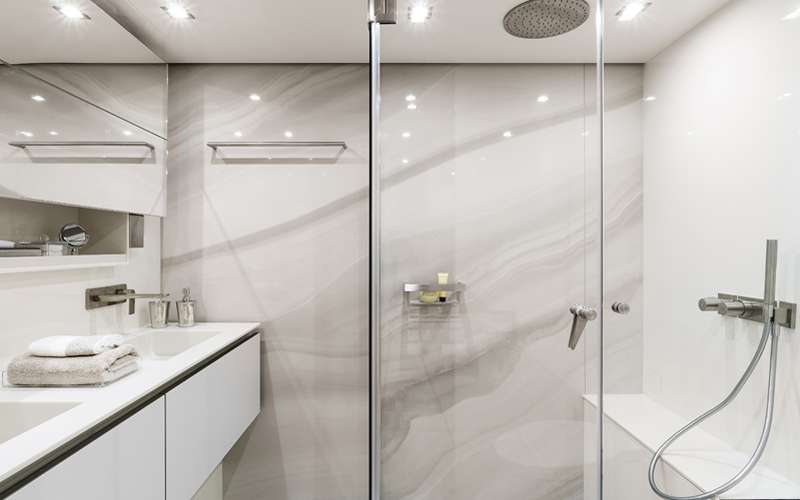 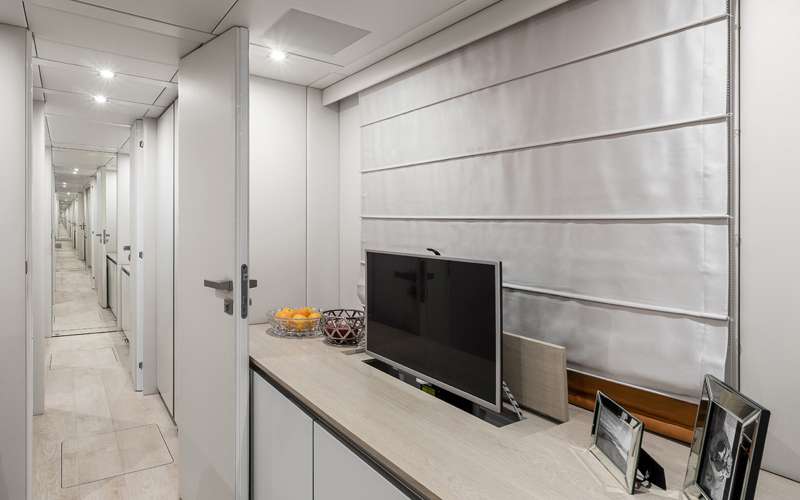 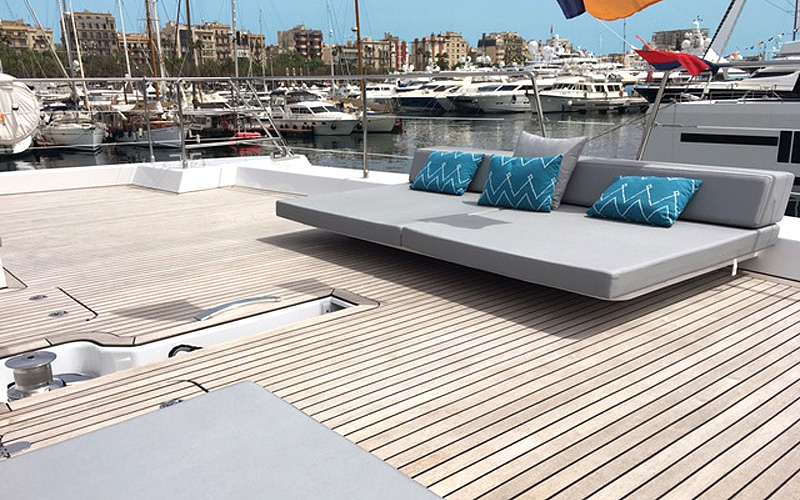 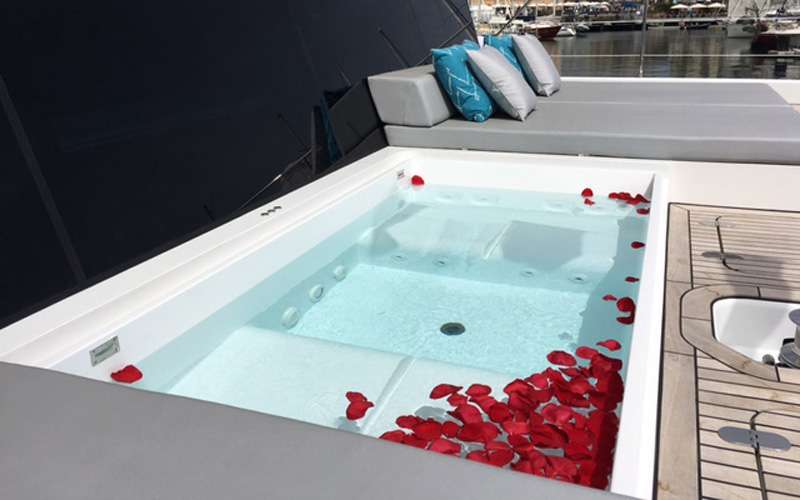 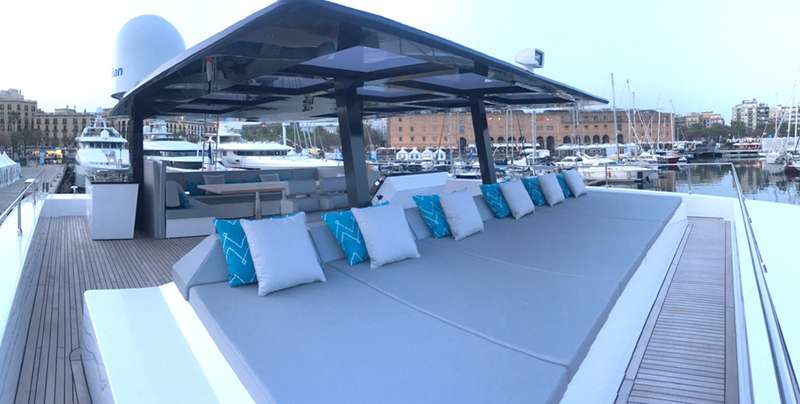 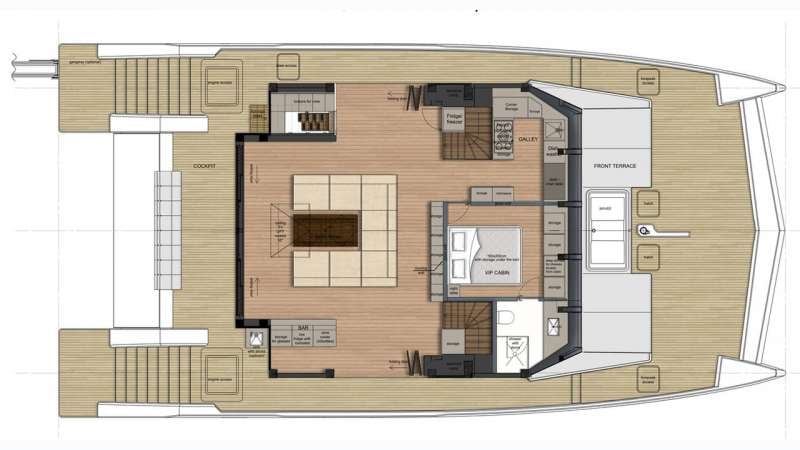 MAYRILOU is accomodating up to 10 guests in 5 cabins as follow:

All Guests cabins are equipped with Queen size beds.
Each Guests cabin has separate heads & shower and air conditionning with private control.

USB plusg In the salon and in all cabins are making mobiles, iPhone, iPod, iPad recharge possible. Also possible for any other audio equipment through Bluetooth and/or WiFi; 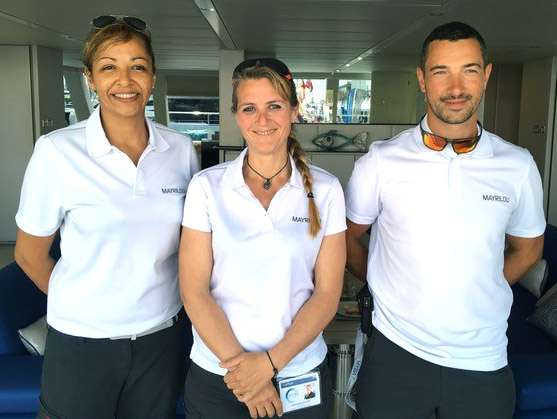 Caroline’s father was an airplane pilot with a real passion for sailing and the sea. She was very lucky to travel around the world from her youngest age.
She discovered sailing during family cruises, exploring the West Indies, French Polynesia and the Mediterranean.
She studied management in La Rochelle in Atlantic coast of France and used to make lot of regatta on famous sailing yachts like TUIGA or MOONBEAM.
She worked during 10 years on her own in the organization of events and nautical training.
Then 6 years ago Caroline chose to change her life and became finally a sailor which was her ever dream.
She got all proper diploma & mechanics certificate and did start a new career in yachting!
Caroline has worked on the Mangousta 108 NAISCA V, on the Princess 64 JTM999 and as on the Turkish Gulet VITA DOLCE.
Warm hearted and friendly, she will make client’s expectations her priority ensuring safety and best atmosphere cruise.

I’ll start from long time ago, my first experience in a kitchen has been at a young age, my dad is a chef and he run his own restaurant since I was a kid, that’s why at 6 years old I found myself busy pealing off potatoes. At the age of 14 I was already able to prepare a good variety of dishes.
I worked in my family’s restaurant in Genova till the age of 22 when, at the end of University I decided to get some more chef experience in London where I worked in a great restaurant as Pasta Chef. Back in Italy after 6 months in the city, I moved to San Remo and I start working as Head Chef in a very busy restaurant in the center. At this point arrived the offer I was waiting for, my uncle asked me to join his business, I wanted to get out the kitchen and I started as agent in his company.
At the end of 2016, I decided to take my chance and jump on board, the yachties life-style was really attractive and my chef soul, after along rest, was knocking at the back of my head. I didn’t have to wait long time to find my first job onboard a 60 m private yacht called Capella C.
After 2 years as Sole Chef and the Europe’s circumnavigation, I received a phone call from my ex colleague and great friend Cedric, he told me that he was looking for a chef for the where he was working on, together with Caroline, to do charters in the Caribbean Sea. That was exactly the challenge I was looking for! and here I am, on board Mayrilou, looking forward to offer my best food to our guests.

After spending three years in St Martin in the Caribbean islands as a bartender and waitress Dorine decided to go see the world and had the opportunity to embark on a private boat as a stewardess to go up Maine from St Martin, for one year.
This experience changed her life and she decided to make it her life’s work.
Back in St Martin she worked as chef or stewardess on different S/Y charter yachts like BARBUDA BELLE, NAEJ, LADY ALLIAURA .
Dorine is curious and passionate, responsible, warm and friendly, her creativity and her sweetness have been always appreciated by the crew and guests.

Cedric is born in Nice area. He grew up between the sea and the mountain with trips in the islands overseas.
Pushed by his family who always worked in this field, he started his young career working in some famous restaurants and hotels in the French Riviera and in La Reunion Island,
While visiting le Meridien Hotel in Monaco he had the opportunity to start working in the safety field which did bring him to develop various skills including maintenance of mechanical machinery and to volunteer at the SNSM for the safety committee of the yacht club of Monaco, the safety and the security of the marina.
Cedric met Caroline when he was working for the Port master of Golfe Juan. He decided to do everything possible to embark and live on the sea with her. He returned to school to pass his certificates. He took the position of 3rd engineer & deckhand on CAPELLA C, an amazing 60m exploration vessel during nearly 2 years.
Aboard MAYRILOU, he will be available for everyone, dedicated to high-end service and a keen sense of details.

Maxime always had nomad life, grew up in differentness part of France (Anjou, Alpes, Reunion).
When he was 18 years old, he moved to England where he worked as waiter in a select & private club in London but took evening classes in London colleges as well.
2 years later he did the same in Tenerife, a Spanish island where he worked as bar tender.
When he was 21 years old, the minimum age required, Max became cabin crew member for several French airlines based in France, Africa and Middle East (Senegal Egypt, Mauritania, & Emirates). He discovered how sailing during his time off.
In 2006 he started his yachting carrier as mate; doing boat deliveries for Sunsail or Moorings, sailing mostly in the Caribbean area and in the Colombia coasts.
He crossed the Atlantic Ocean several times; twice on board Coriolan, a 77’ catamaran and once with Rose of Jericho, an 85’ catamaran.
In 2011 after completing is French captain certificate, he worked on a freelance basis on some charter yachts like Firefly, a Lagoon 620, Lady Alliaura, Privilege 745 and on Motu, a Privilege 615 sailing for her owner in Cuba in 2012.
In the Winter 2012/2013 & Summer 2013; he has been employed as first mate on Rose of Jericho 85 exploring the Caribbean but also the Corsican waters