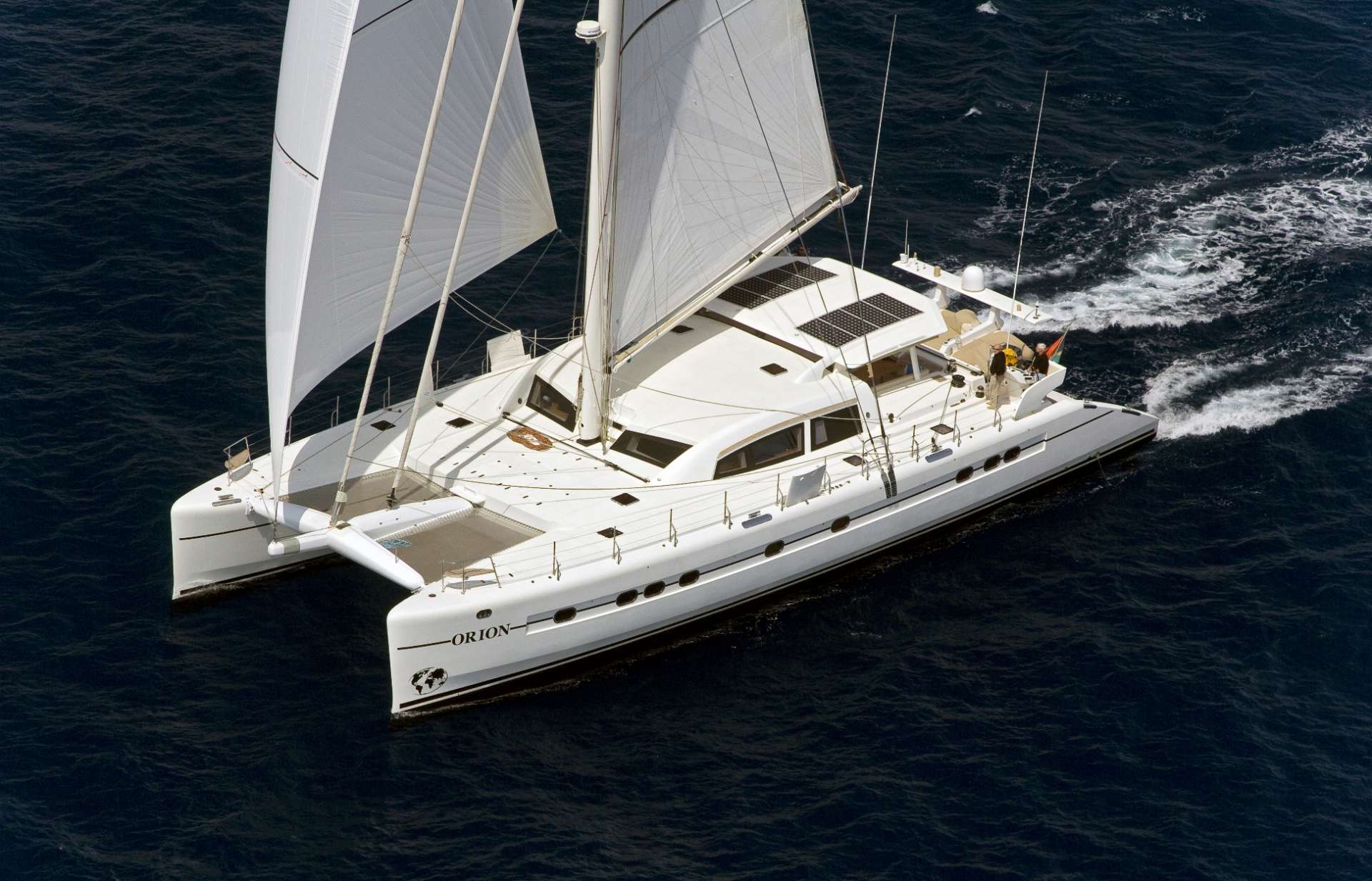 4 cabin layout:
Master cabin – located aft starboard cabin featuring the king master stateroom with generous en suite bath and the ‘family apartment.’ 2 additional cabins are located in this unique suite. One cabin has a king size bed. The adjoining kid’s cabin, dubbed the “Pirate’s Den”, has two double beds plus a smaller child’s bed 2’ 6 by 4’ 6 – perfect for older kids or a nanny and younger children. Large bath with a vanity, toilet and shower.
The en suite VIP stateroom is located aft port and can be configured with one king bed for a couple or two single beds. Each stateroom has individual A/C controls, CD and DVD players and portholes that look out to the horizon.

Marcelo was introduced to sailing at the age of 8 in his native country of Brazil. He began with the Opti and quickly transitioned into International 420s. Marcelo went on to win several races, including the Brazilian Championship in 2001. At the age of 16, he joined his family on board a Bruce Farr 38′ and spent the next three years cruising along Central and South America, well as the Caribbean. Marcelo began his professional career in 2005 as a deckhand aboard a 100′ motor yacht. At the age of 22, Marcelo started as captain on board a 75′ catamaran. Throughout his career, Marcelo has sailed over 70,000 nautical miles. He is highly skilled in cruising navigation, races, and charter. With over 14 years in the industry and with 7 Atlantic crossings,, Marcelo has extensive knowledge in the cruising areas of the Mediterranean, Caribbean, and South Pacific. Marcelo’s extensive knowledge combined with a calm and positive attitude make him the ideal captain for your charter aboard ORION!

Marcelo Ferreira Vicente, 57 (father of Marcelo Curci F. Vicente) is the relief captain of ORION. Having logged nearly 100,000 miles as an offshore skipper and engineer delivering multiple high-end sailing catamarans and large power yachts, he’s well suited for his role on the 90-foot Catana. His professional and academic credits include a 200-ton unlimited yacht master’s license, a university degree in physics, and technical school credits in electronics from institutions in his native Brazil. Areas of interest in yacht systems include rigging, engineering, plumbing, and electrical. He’s also a sailboat racer.A legal resident of Italy, Marcelo speaks Portuguese, Spanish, and English. In his wake are miles spent aboard in the South Pacific; off North and South America, including the coast of Brazil; the Caribbean islands, and the Mediterranean. In his spare time he enjoys surfing, windsurfing, and standup paddle boarding.

Mateus Curci Ferreira Vicente, is Brazilian / Italian and brother of ORION’S skipper Marcelo Vicente. Mateus is an exceptionally well-trained and experienced chef for his 28 years. He is a graduate of Le Cordon Bleu Paris & London, has an advanced certificate in Artisanal Bread & Viennoiserie from the San Francisco Baking Institute, a Restaurant Management Certificate from Senac Sao Paulo, Culinary Arts Certificant from San Fernan Castle Foundation in Spain, and an Advanced Certificate in Wine & Spirits from the WSET International – the Wine & Spirit Education Trust in London.

Mateus has worked along-side world class chefs in Europe and Brazil Michelin-rated restaurants, as well as at private estates, on board custom-built sailboats and some of the world’s most elite super yachts – both private and charter. His experience includes service as head chef, special project manager, and menu planner – adding to his culinary organizational & creative skillset. Mateus truly delights in sharing his talents by preparing delicious and artfully presented meals for guests on board ORION.

Maura Curci Ferreira Vicente is the chief stewardess aboard Orion. As an experienced liveaboard sailor for over a year, she’s kept ORION in immaculate condition while crossing oceans and bays. Her lengthy bluewater resume includes service aboard luxury power and sailing yachts. Her deliveries have taken her from Brazil to the South Pacific and the Mediterranean.

Sanne Klippel, the second stew on Orion was born and raised in Holland. She has travelled the world for the last 10 years, working with marine life, learning languages and cultures and growing as an individual. She has lived in Spain, Hungary, Australia, South Africa and the USA and traveled many more places as a volunteer or as traveler.

Over time being on a boat has become her second nature and she still learns every day. In the year 2020 she sailed over 7000 nautical miles. During all these amazing adventures, she tries to develop herself as a skillful seafarer and is happy to be on the water every day – sailing, surfing, swimming or simply enjoying the ripples of the water.

With years and years of hospitality experience in her back-pocket and a great love for our oceans and it’s life, it is certain she just started this ocean story and hopes for years of yet unchartered waterways to explore!

When you are her guest, she strives to make sure you will have the best experience! Get ready to come aboard and live an unforgettable experience.