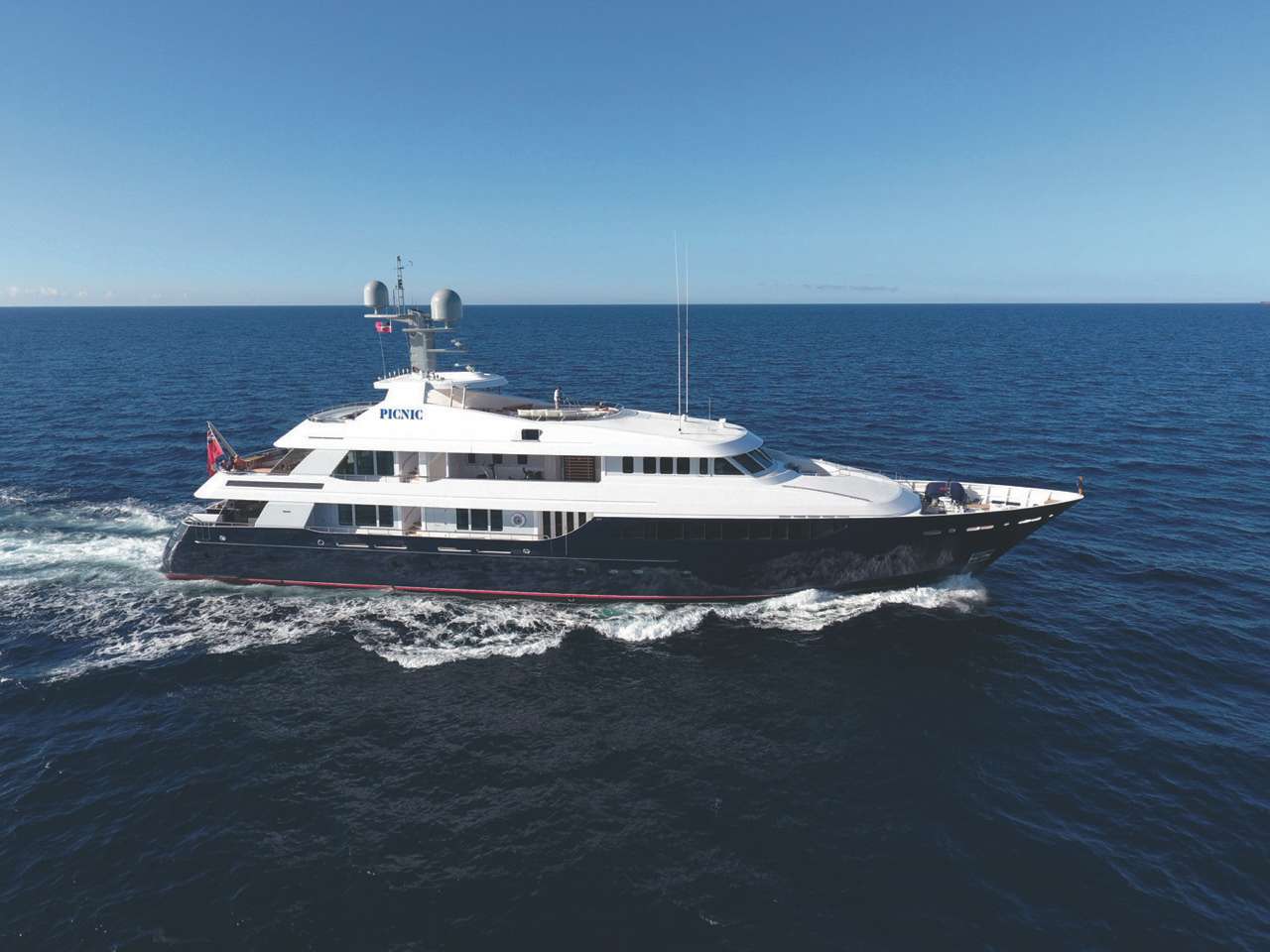 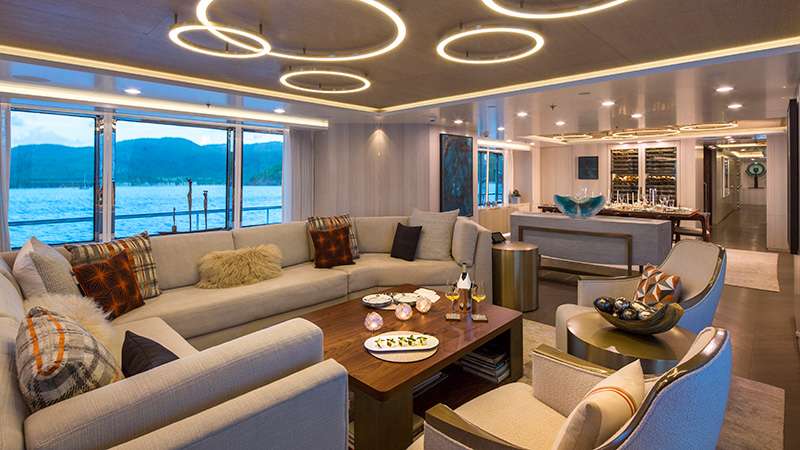 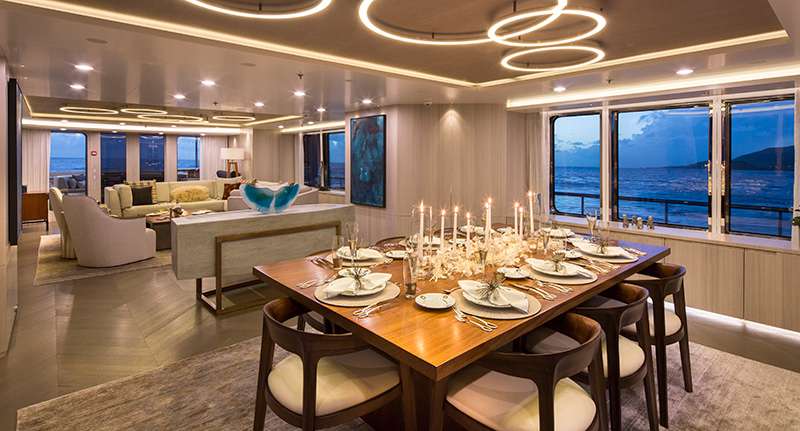 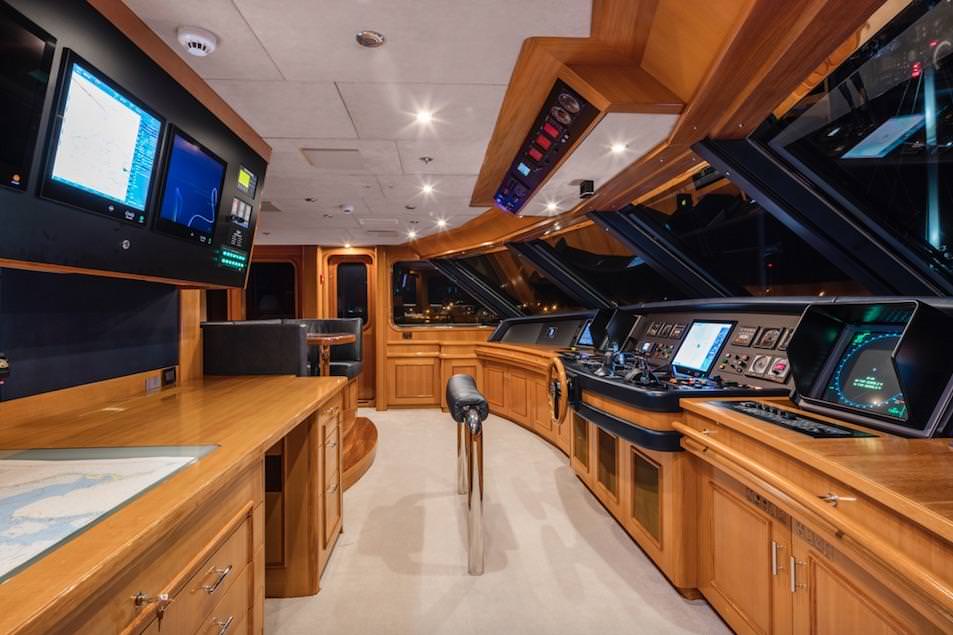 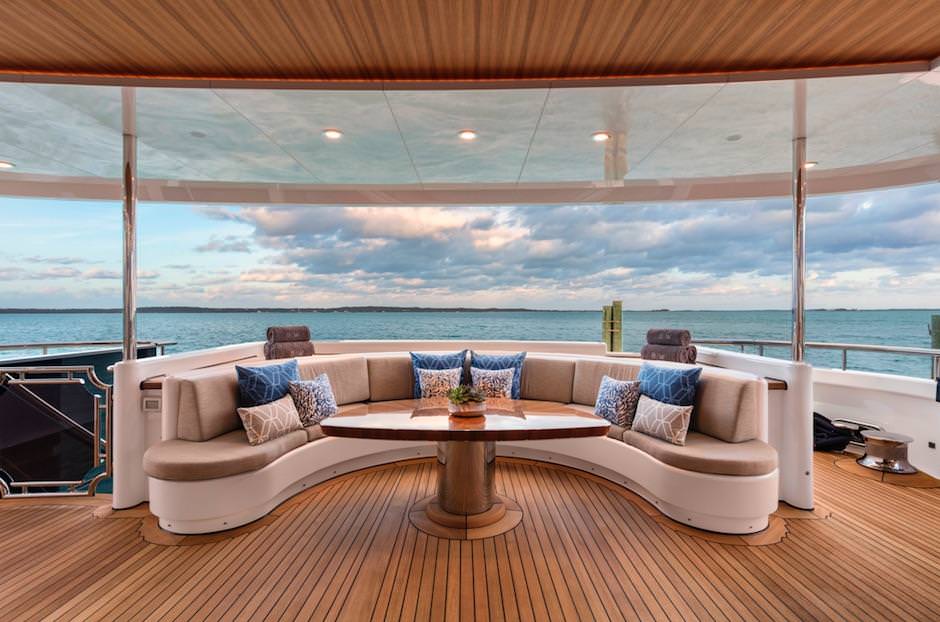 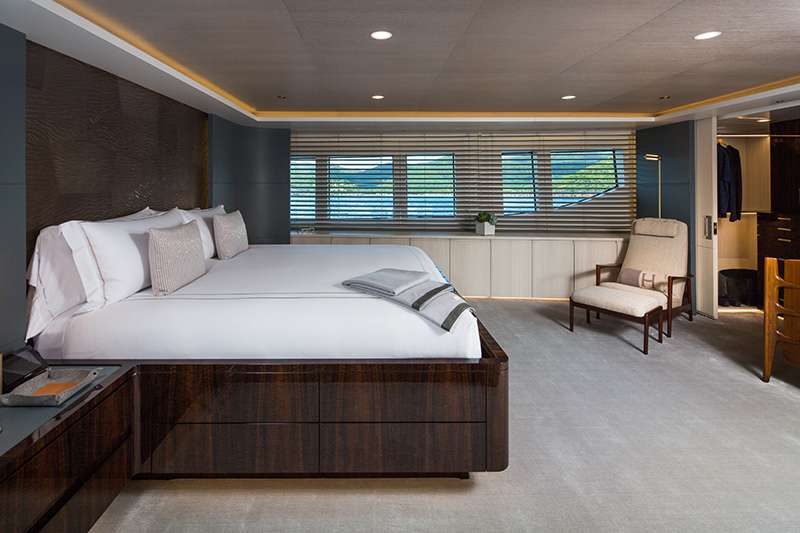 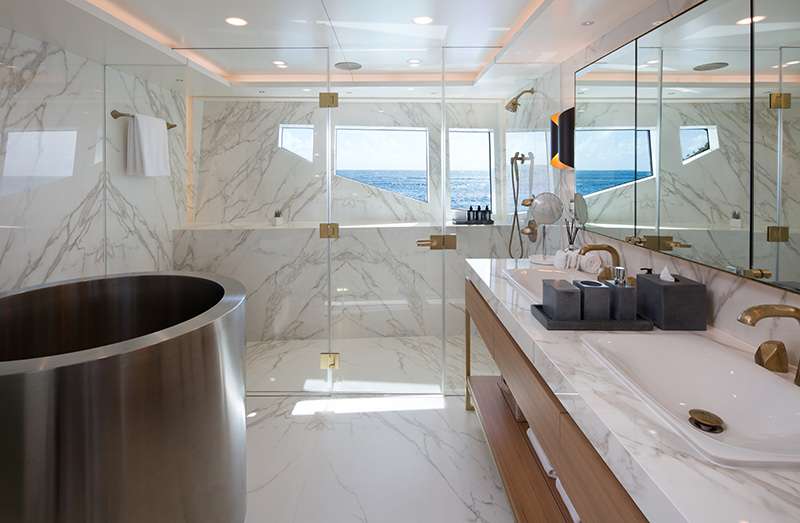 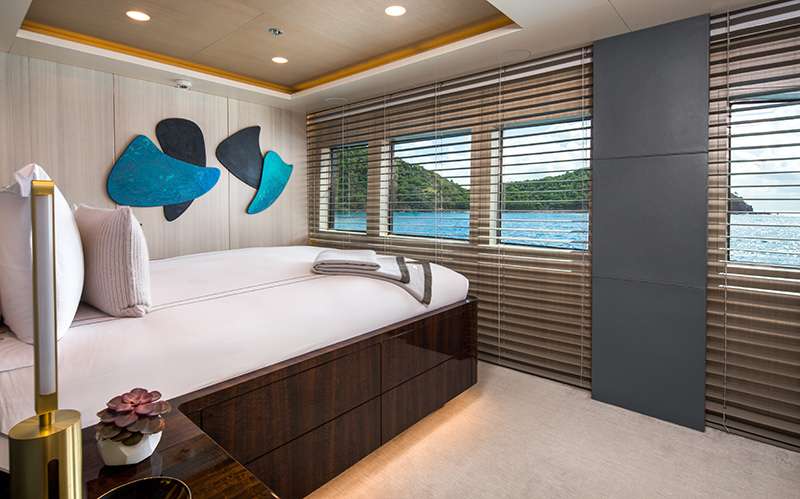 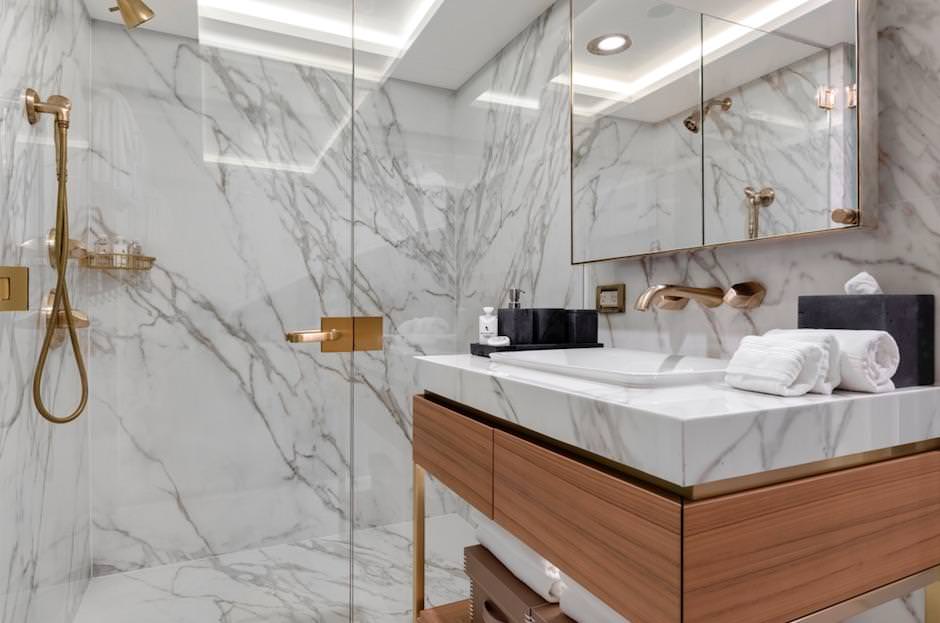 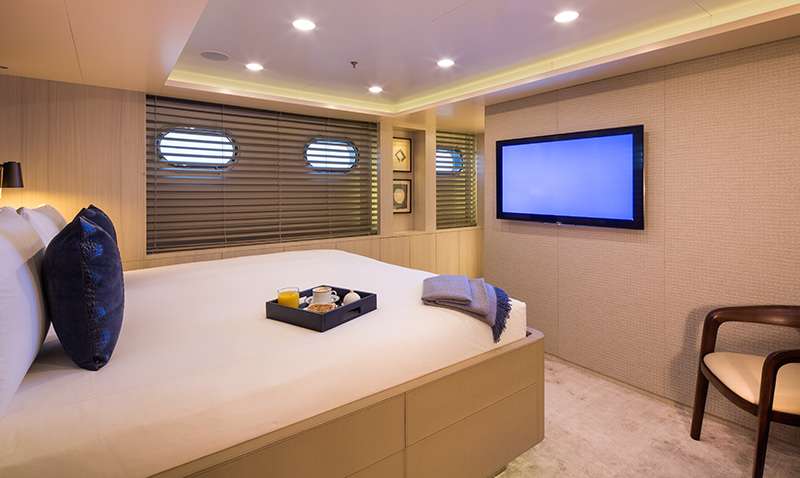 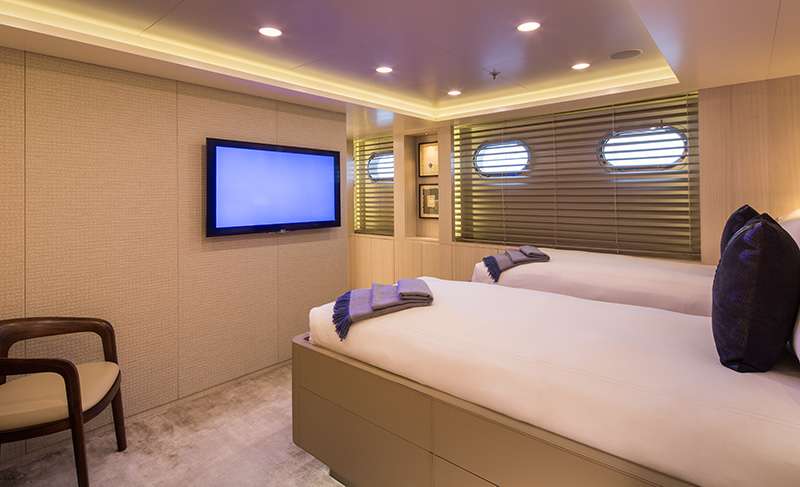 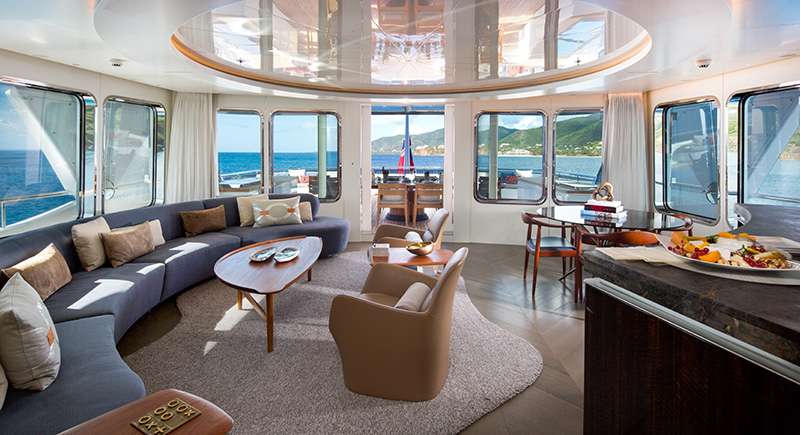 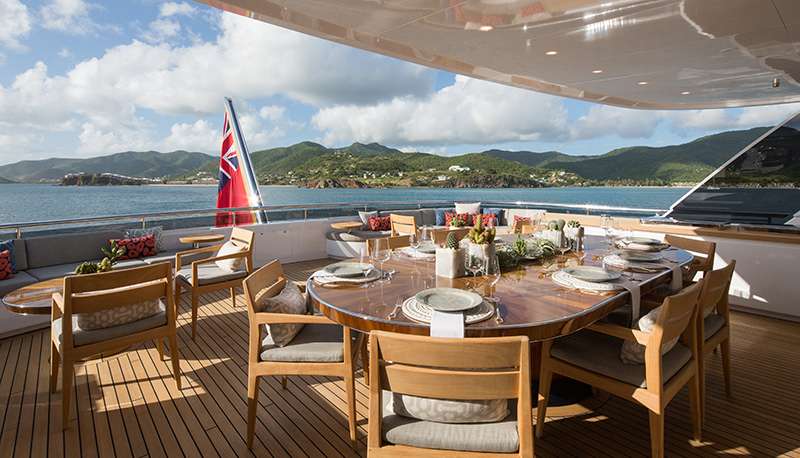 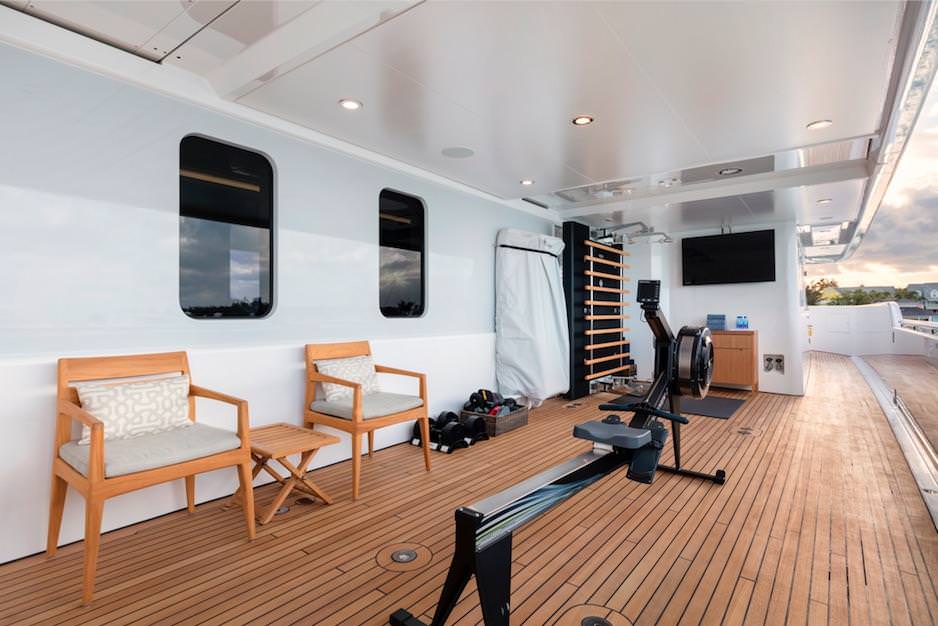 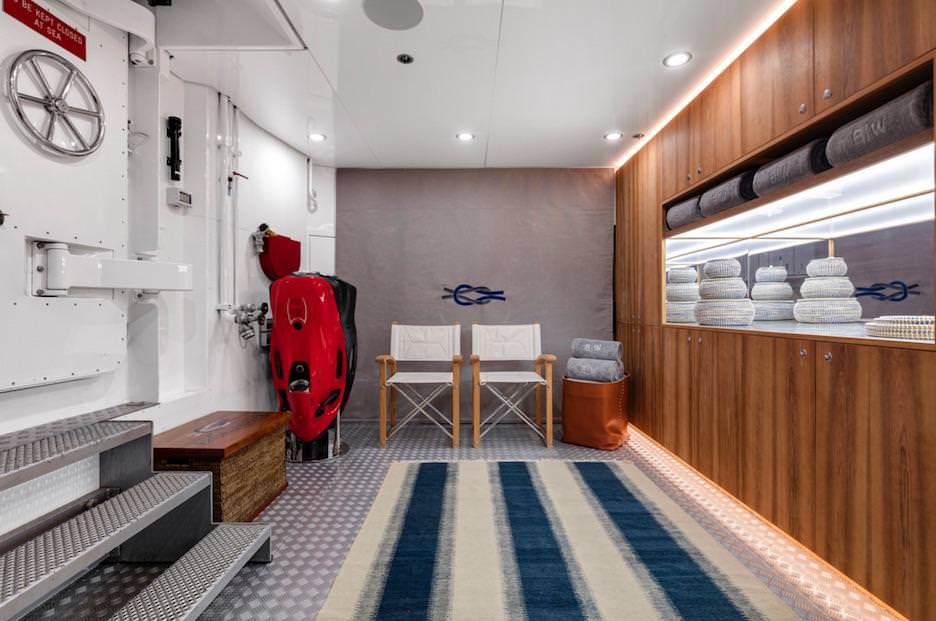 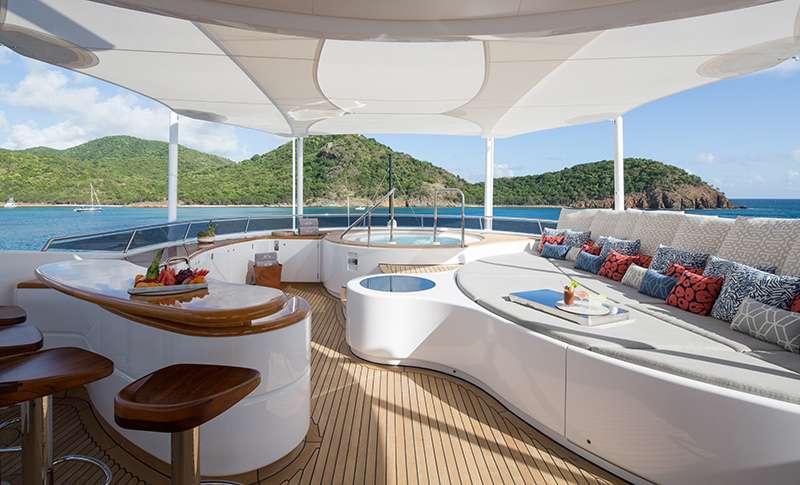 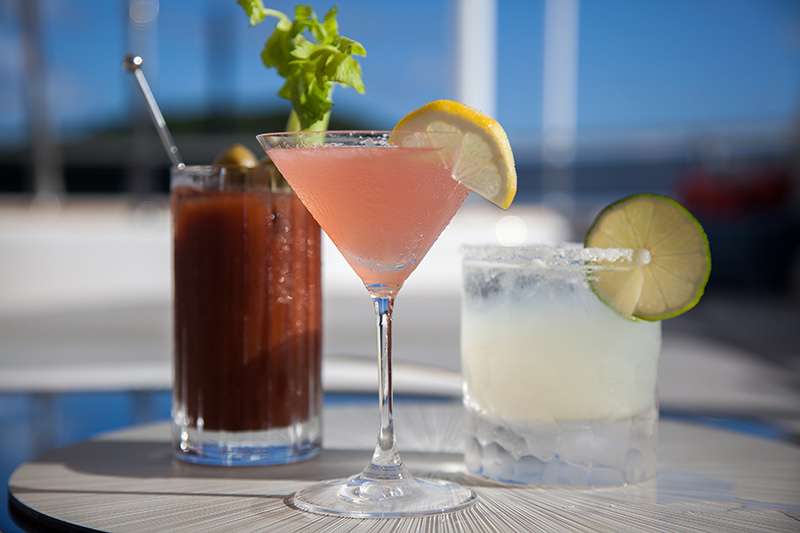 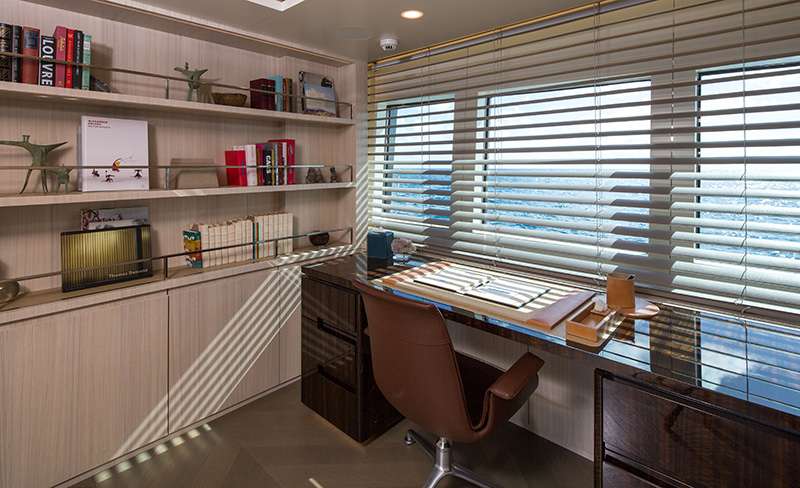 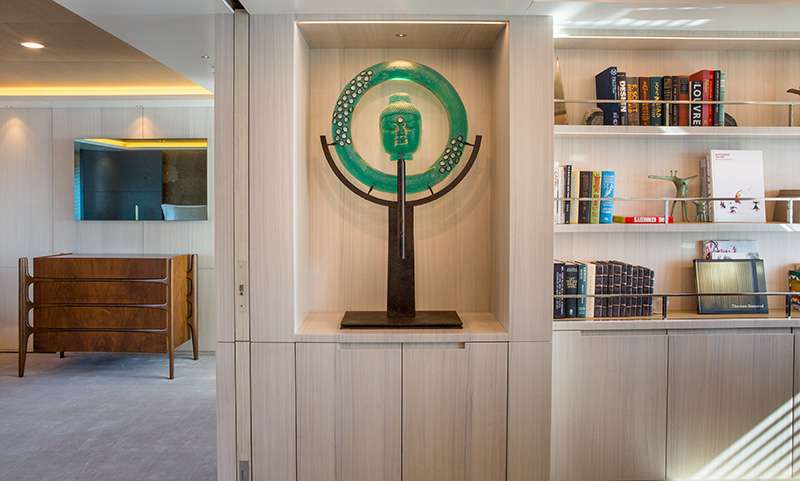 A beautiful and spacious Master cabin complete with office lives on the forward region of the main deck with a VIP Queen cabin accessible on the starboard side of the main deck as well. 4 lower king sized guest cabins are in the lower guest area. 2 of which convert to single beds and 2 of which have additional Pullman bunks.

Captain // Ben Pollon
Ben grew up in the Turks and Caicos Islands where water abounds, and hospitality is part of the culture. In his early days he and his family of four lived on a sailboat and spent the summers cruising the Caribbean. After moving to the mainland USA, and a 10yr. career in the S. Florida marine repair industry, he longed to be back on the ocean and joined yachting full time in 2006. Ben quickly obtained his 3000 Master’s License and has since been captaining yachts all over the world of varying sizes up to 230 ft. Now a seasoned charter captain, with Ben at the helm you are sure to have the trip of a lifetime.

First Officer // Shaun Frith
Shaun was born and raised in the city of Johannesburg, South Africa. Having studied IT and feeling cramped up in an office, he took the leap to try sailing in Cape Town and down the East coast of South Africa. After his 1st taste of this in 2009, he never looked back and completed his Masters license in 2019. Shaun is an RYA recognized jet ski instructor, PADI Rescue diver and is responsible for all Picnic water activities. He also has a great knowledge of the typical Mediterranean hotspots and Caribbean beaches.

Chief Engineer // Theo Smit
Theo was born and raised surrounded by the breathtaking natural scenery that is Cape Town, South Africa. His strong love for the outdoors landed him a position as an adventure tour guide throughout the whole of Africa, showing tourists everything from the Namib Desert to Zambia’s Victoria Falls. In 2009 Theo embarked on a new adventure on the sea and his engineering and travel skills married happily with his transition to the world of yachting. Theo has been trained by a number of the best engineers the industry has to offer and recently achieved his Chief Engineer (Y3) License. When he isn’t working (which is rare!) you can find him exploring the outdoors, hiking, watching sports and spending time with his family in South Africa.

Second Engineer // Christiaan Olivier
Christiaan grew up in the beautiful Cape in South Africa. His big love and respect for the outdoors started at a young age from camping, hiking and hunting on land to diving, spear fishing and his greatest joy, surfing. The ocean has always been a place inspiration, calm and happiness to him. Soon after he finished his Bachelor’s Degree in Management Accounts he realized a desk job wasn’t for him and sailed across the Atlantic in search of something more adventurous. After trying different avenues of yachting he finally found his niche in engineering and is currently studying for his Chief Engineer (Y3) License.

Chef // Gjorgi Mitev
Chef Gjorgi was born and raised in Macedonia where his passion for all thing’s food began. He studied Food Science and Technology and apprenticed in some of Macedonia’s finest hotels after which he opened his own restaurant at the young age of 20 years old. Gjorgi then moved to St. Maarten where he met his wife and had a baby. During this time in St. Maarten, after being exposed to the industry in this yachting town and having a Brother who was already working on yachts, Chef Gjorgi began his career as a yacht chef. During his 9-year yachting career, he has continuously explored various cuisines while working alongside some amazing chefs in the Caribbean and Mediterranean. Chef Gjorgi has served elite clientele both on land and on luxury sailing and motor yachts. He looks forward to stimulating guest’s palate with cuisine from all over the world and wowing lunch and dinner tables alike. To see more of his work, look up Gjorgi on Instagram, @chef_gjorgi.

Bosun // Ryan Lombard
Ryan was born and raised in Johannesburg, South Africa. Due to his mixed heritage and up bringing in a culturally diverse society he developed a keen interest in other cultures. Both his grandfathers served in their respective navies and his parents met each other while sailing in Saint Thomas. He’s therefore always been inclined towards the romantic notions of adventure and faraway places. When Ryan turned 18 he joined his first yacht and has recently been sailing on expedition and research vessels in the South Pacific. He joins the Picnic program excited to be chartering in the Mediterranean and Caribbean.

Chief Stewardess // Charlize Frith
Charlize was born in South Africa and raised in the country side on a wine farm near Cape Town. She completed her studies as a Somatologist where she gained thorough knowledge of customer service and management, which prepared her well for her ventures in yachting. Charlize joined the yachting industry in 2013 and has cruised extensively throughout the Mediterranean and a few season’s spent in Caribbean waters in this time. With a great love for what she does, Charlize is committed to go the extra mile to ensure guest have a wonderful time on board, leaving M/Y Picnic with the best of memories. Her hobbies includes hiking, Pilatus and getting stuck reading a good book.

Second Stewardess // Gaylaine Quach
Gaylaine, was born and raised in the metropolitan city of Toronto, Canada. At an early age, she discovered her love for travel, as her large family would take road trips every summer; her highlight being Highway 101, touring down the West Coast of the USA. Having a love for the outdoors, Gaylaine enjoys skiing, kayaking and hiking. She is bilingual, speaking English and Cantonese. She worked as a lifeguard throughout high school and studied, Psychology and Anthropology in University. Longing for a change of scenery, Gaylaine moved to Antigua in 2013, where she attended medical school. Enticed by the surrounding waters and variety of yachts anchored in English Harbor, she decided to transition into the yachting industry.

Third Stewardess // Lidia Ackerman
Lidia crew up in the beautiful city of Cape Town, South-Africa. She is part of a big family and is one of a twin, who is interestingly also part of the yachting industry. Her passion for water and diving fueled her change in career from once owning her own handmade jewelry company she transferred her customer service skills over to the yachting industry. In her spare time she enjoys being active and likes outdoor activities like, hiking, swimming, diving and snorkeling. Lidia loves to exercise and dance with salsa and cha-cha being her favorite types. Lidia is hardworking and always ensures guests onboard have a memorable trip.

Fourth Stewardess // Alejandra Cox
Alejandra is a Galapagos islander, with a childhood surrounded by giant tortoises and adventurous sailing boats in her hometown harbor. Her passion for adventure and sailing started when joining her naturalist guide father onboard tourism expeditions around the Galapagos, here she developed a love for nature and wildlife as well as the protection of it. Alejandra studied advertising and graduated with a thesis in visual arts. She worked in the digital department for several agencies in mainland Ecuador. In addition, she has also taken several photography courses, which she likes to combine with her travels. Alejandra is an inspiration for young girls in Galapagos, encouraging them to travel and achieve their dreams.

Deckhand // Radek Leonczak
Rad was born and raised in Poland. He developed his passion for water sports as a child, sailing, fishing and spearfishing on the great lakes, north east of Poland. Travelling was always a big part of his life and after finishing his education he started working remotely in a variety of positions. He then obtained his Yacht Master qualification which allowed him to do yacht deliveries around Europe and beyond. With this background he confidently assists guests with water activities, maintaining a safe approach to having fun.

Deckhand // Michael Rademeyer
Michael was born and raised in the small town of Bulawayo in Zimbabwe. He has always had a passion for travel, tourism and hospitality which lead him into this industry. He’s other interests from a young age was always to do with anything with a motor (cars, bikes, boats and karting) Motorsport became a big passion of his and still is a big part of his life. He managed a Lodge for a year previous to changing the scenery for yachting and the ocean. With the skills gained from managing a lodge and active interest in outdoor activities, it was a smooth transition into where Michael is today.