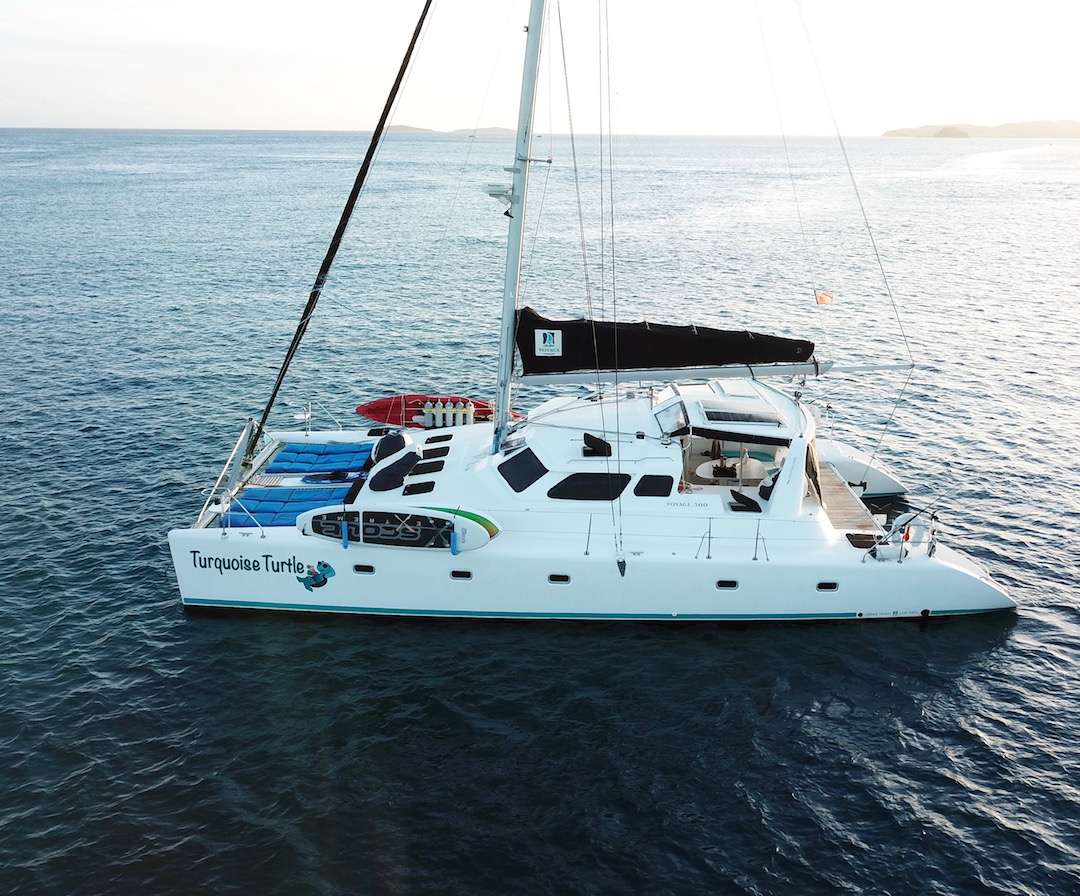 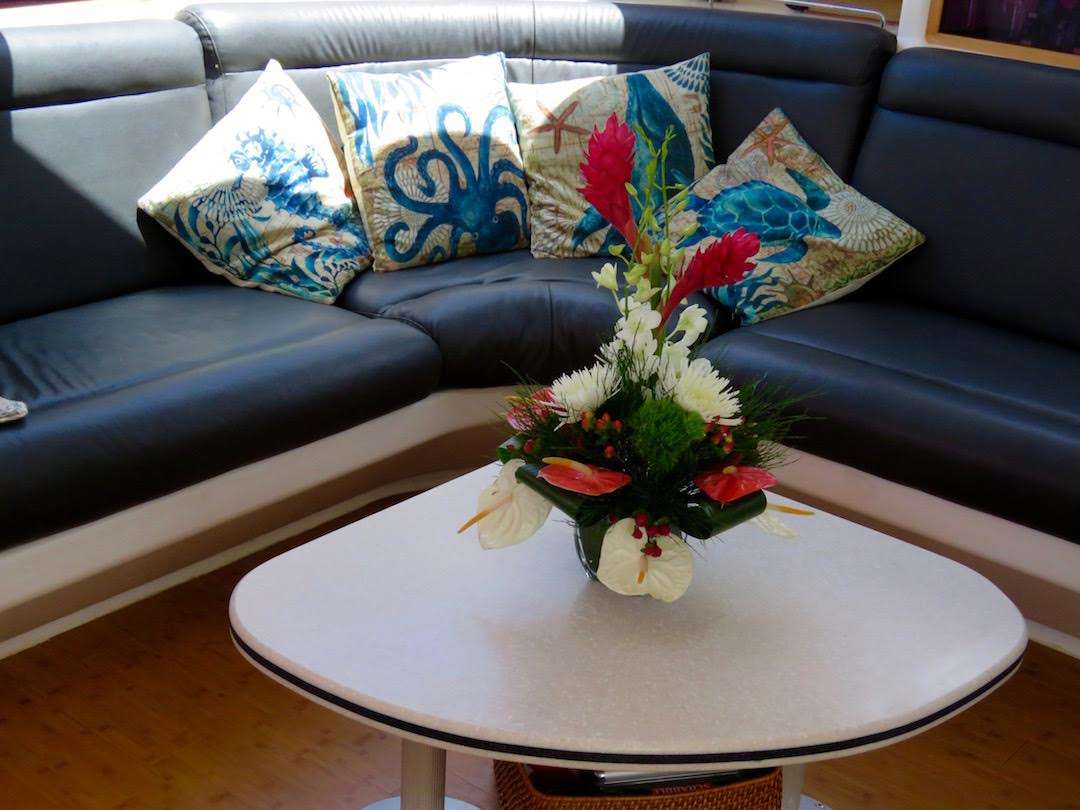 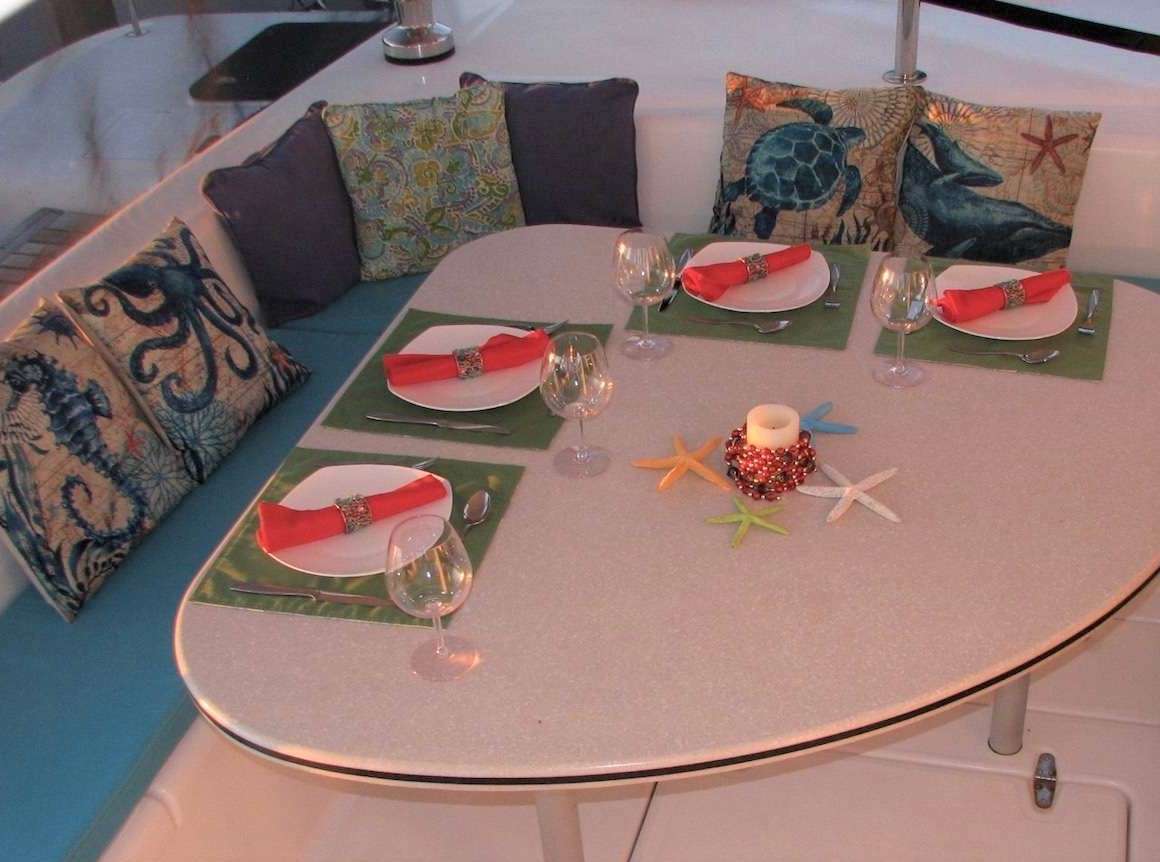 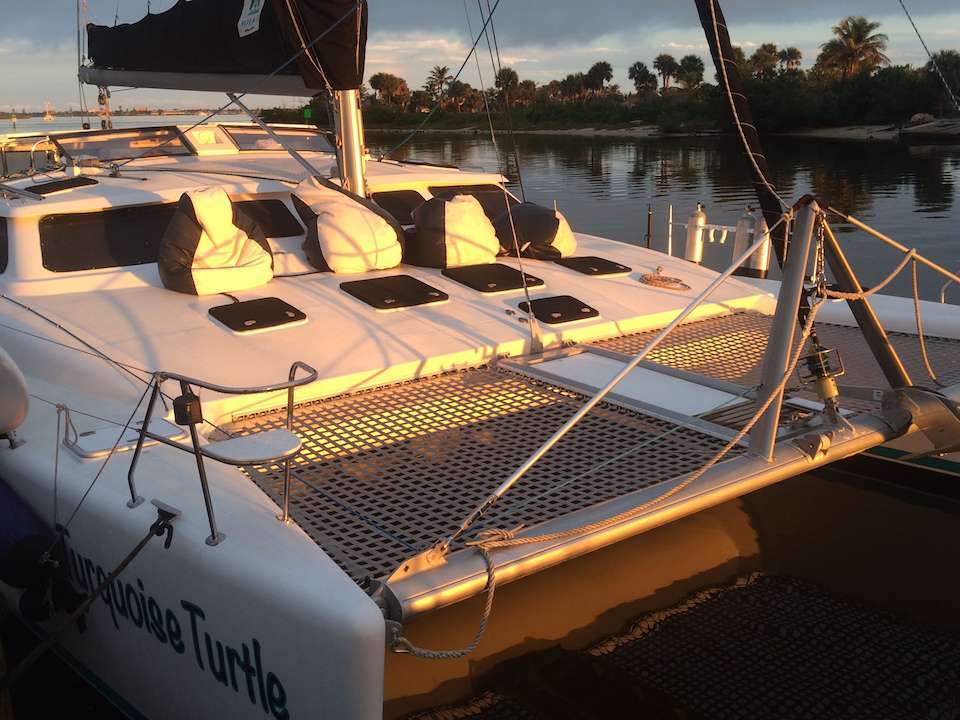 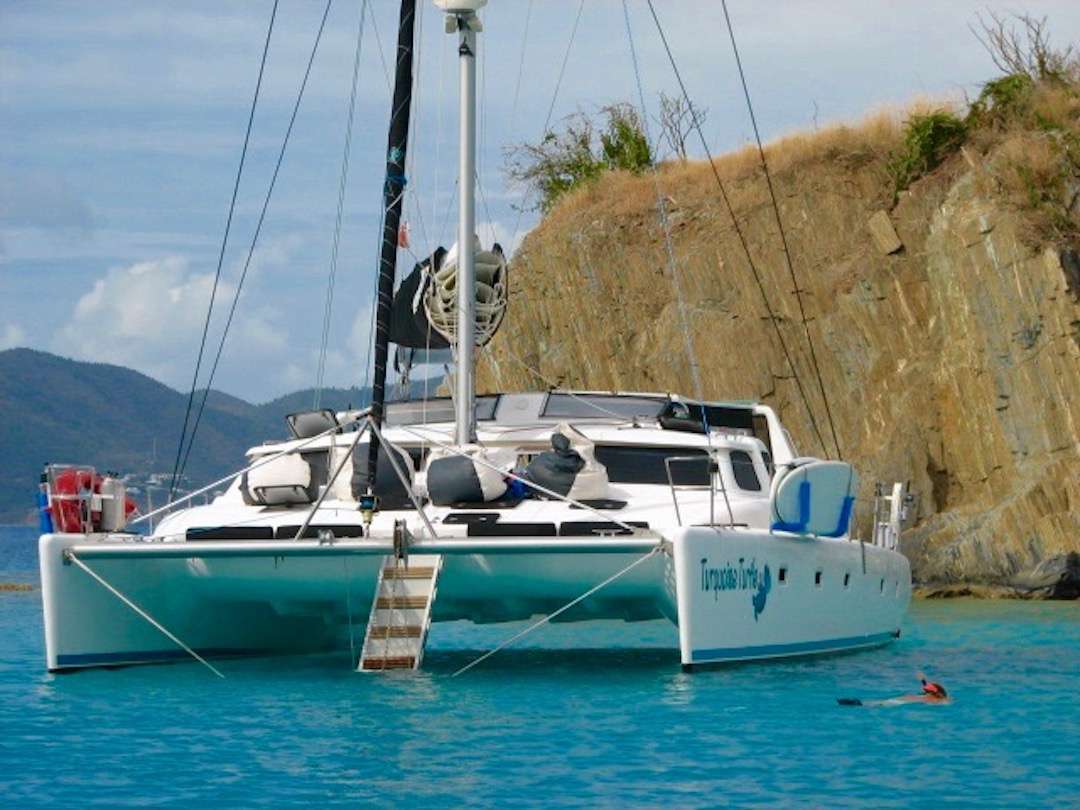 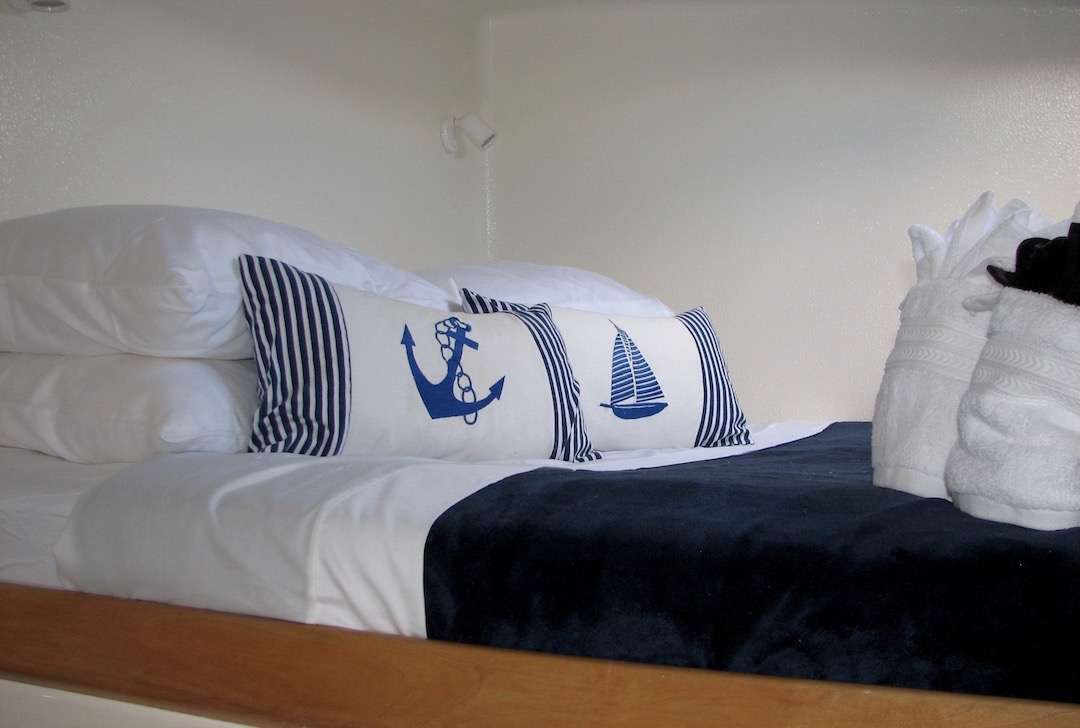 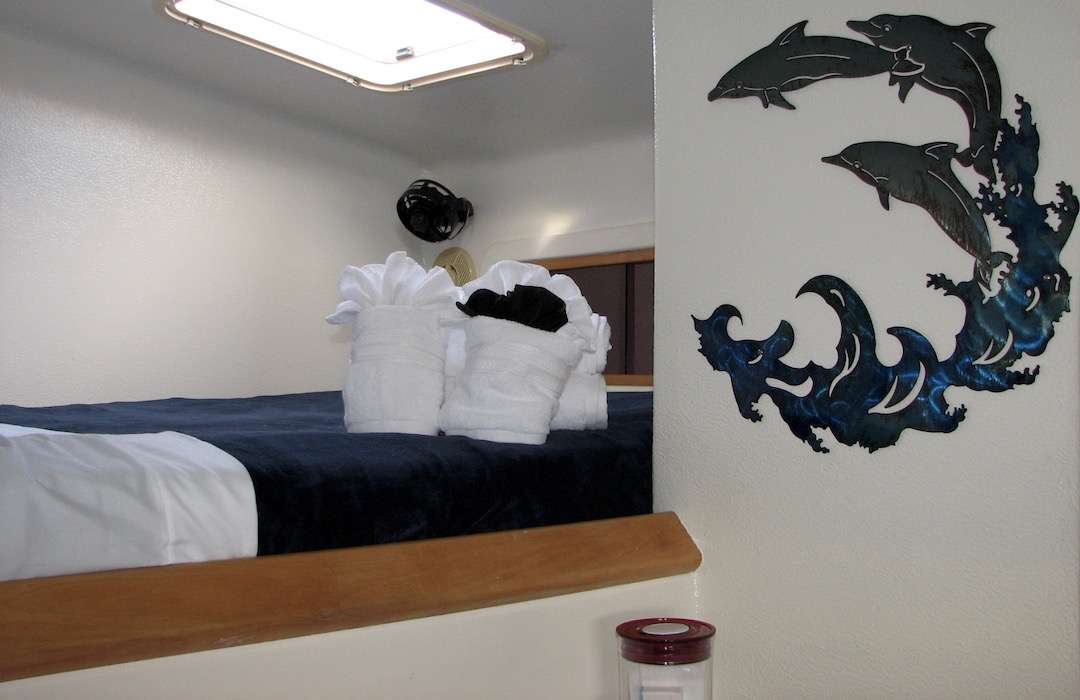 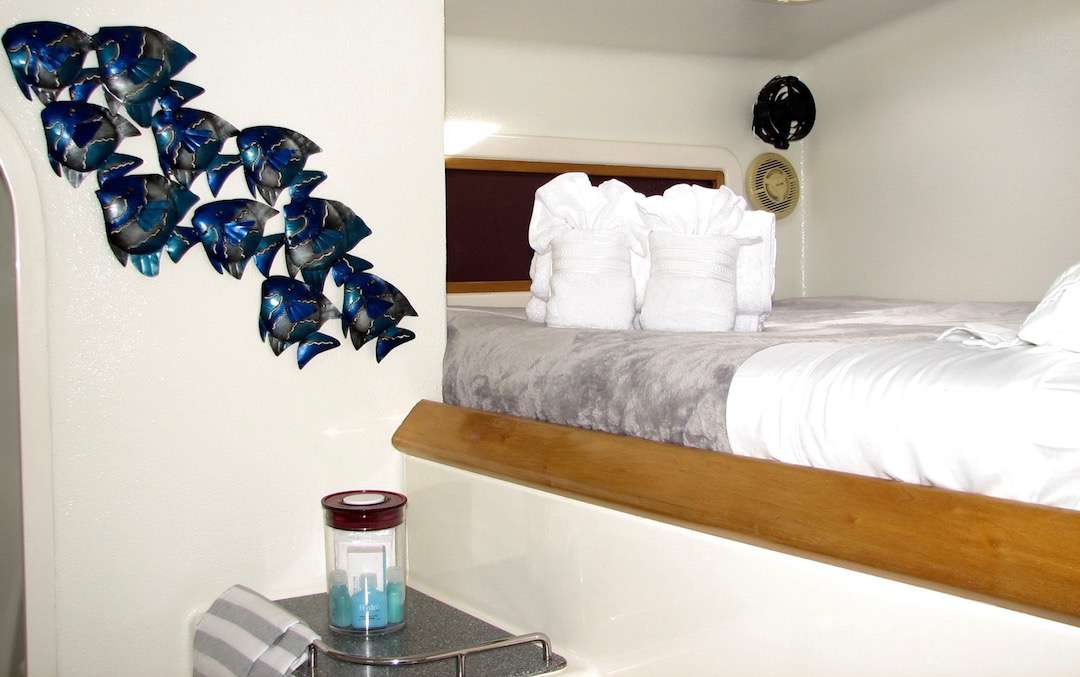 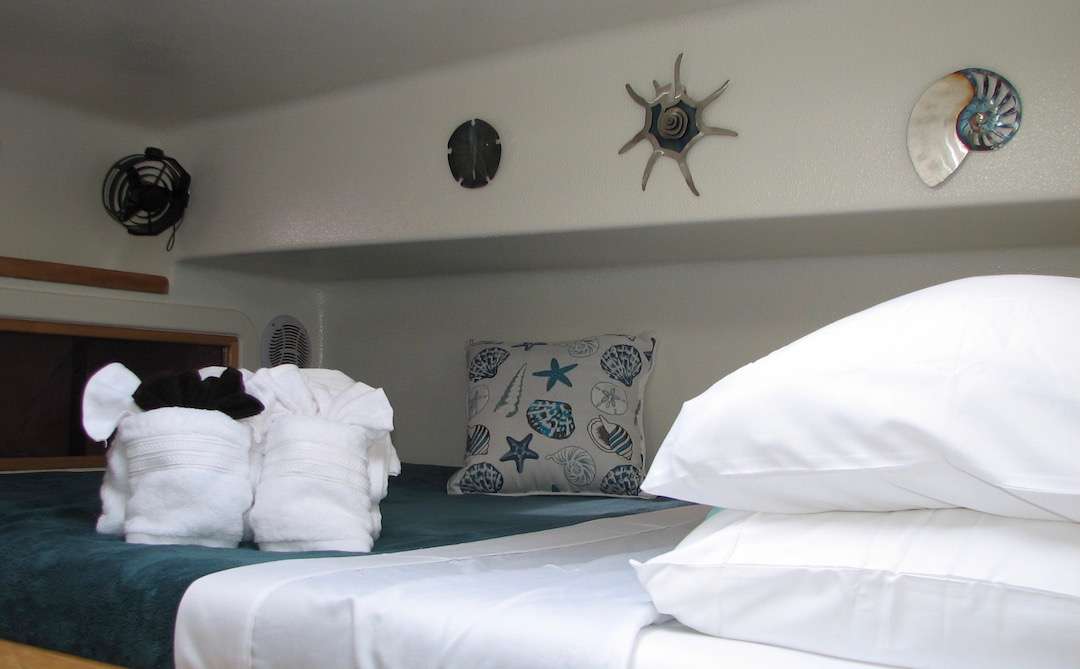 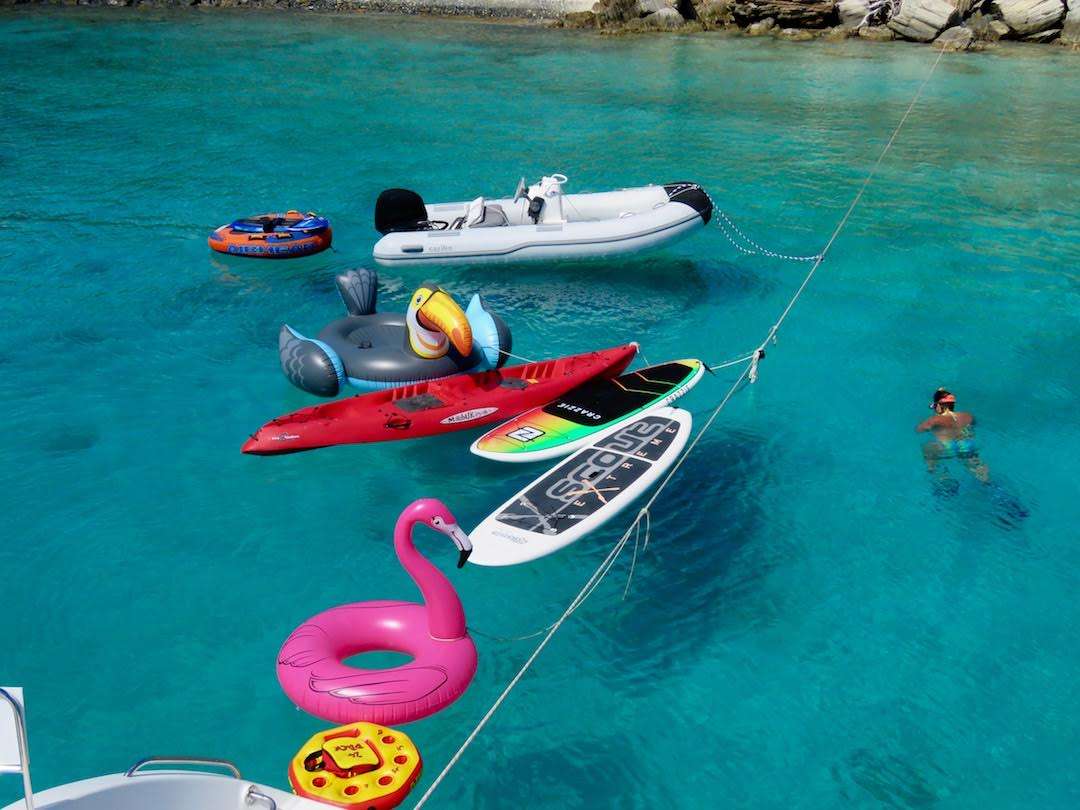 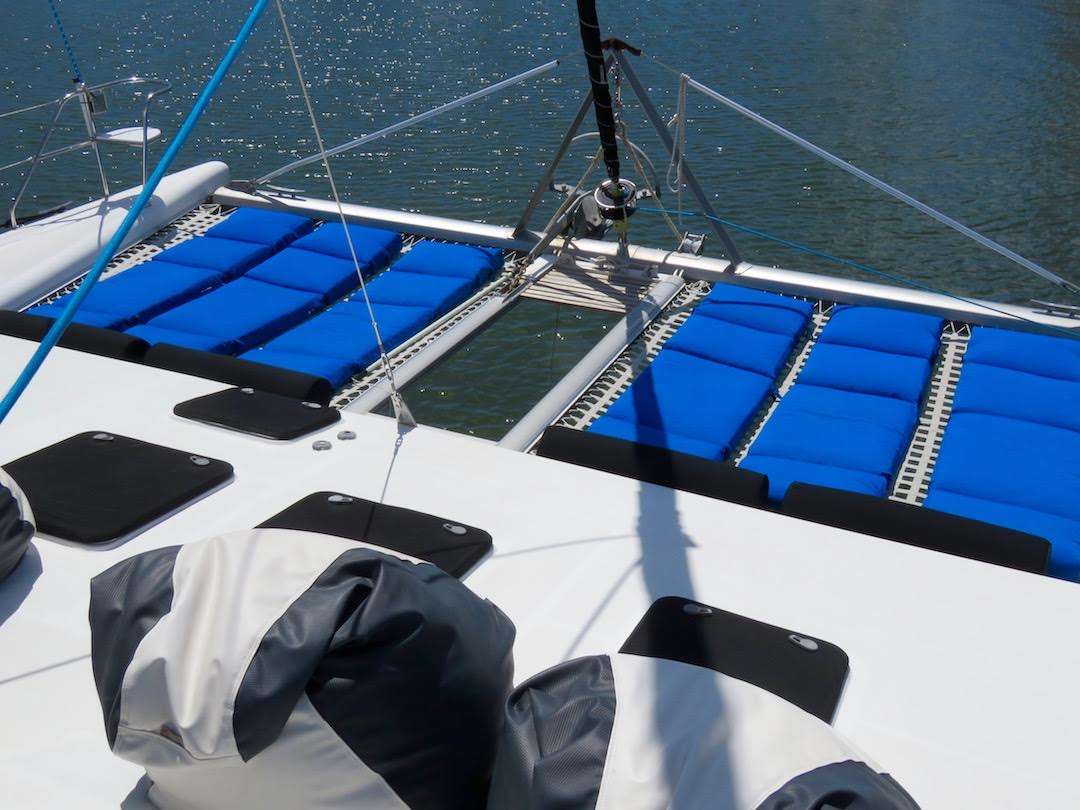 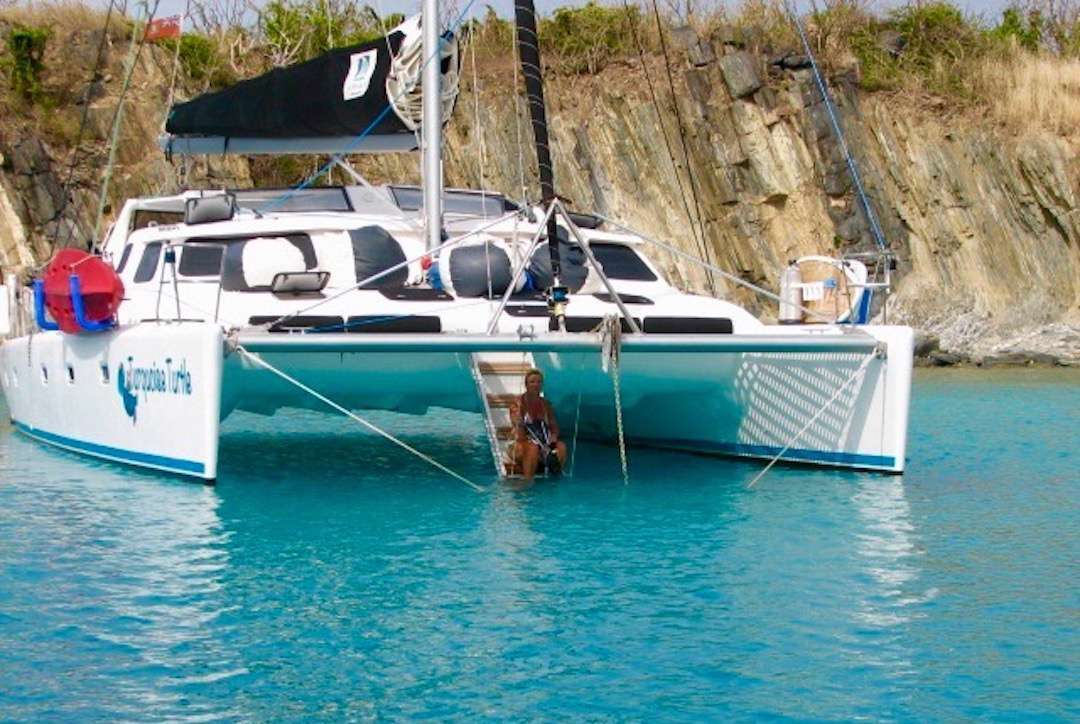 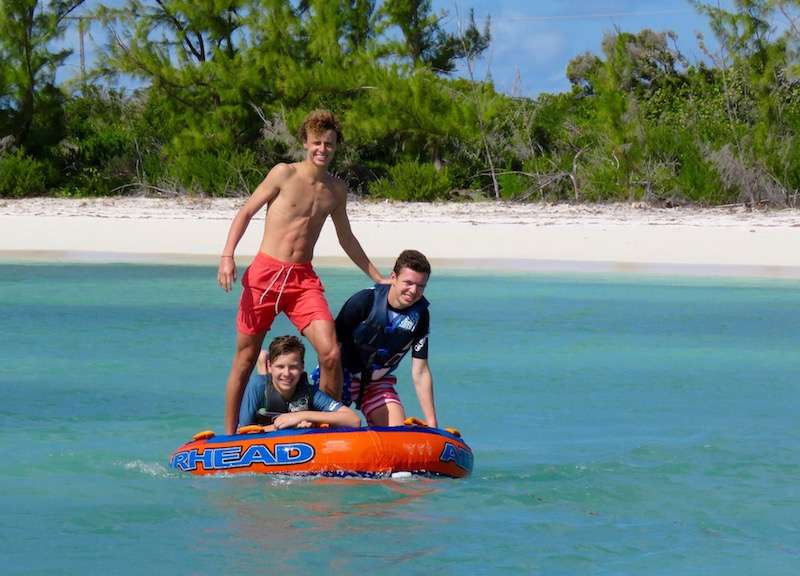 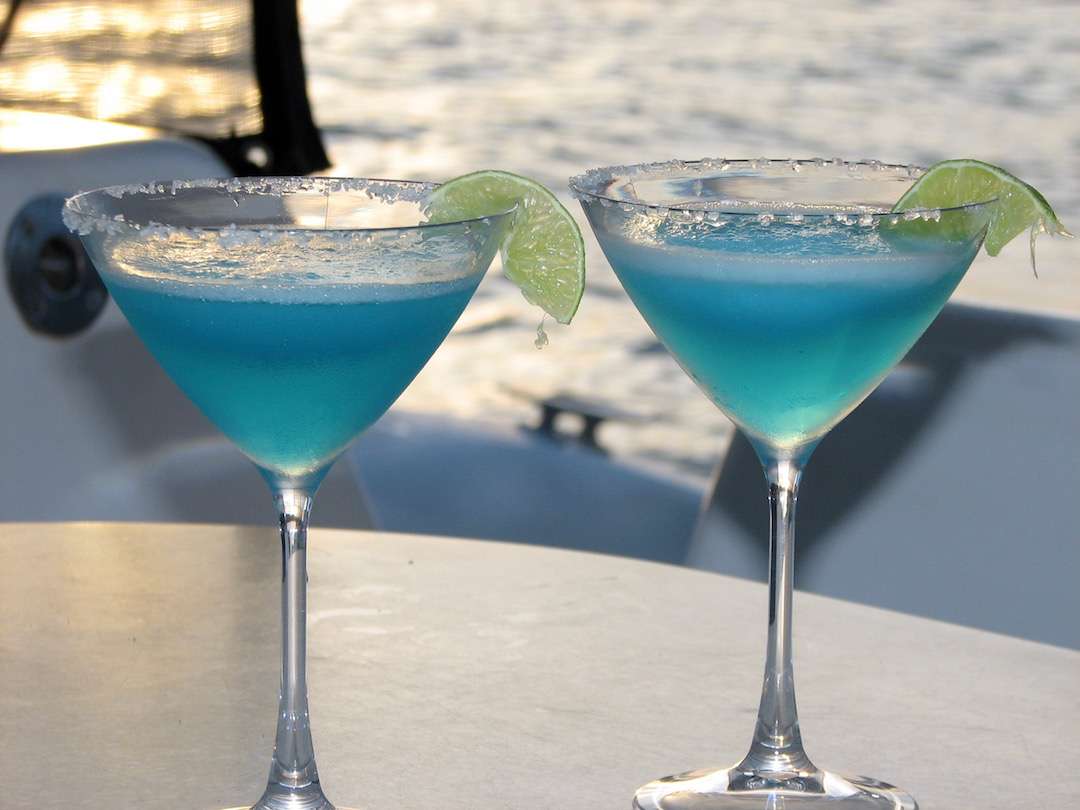 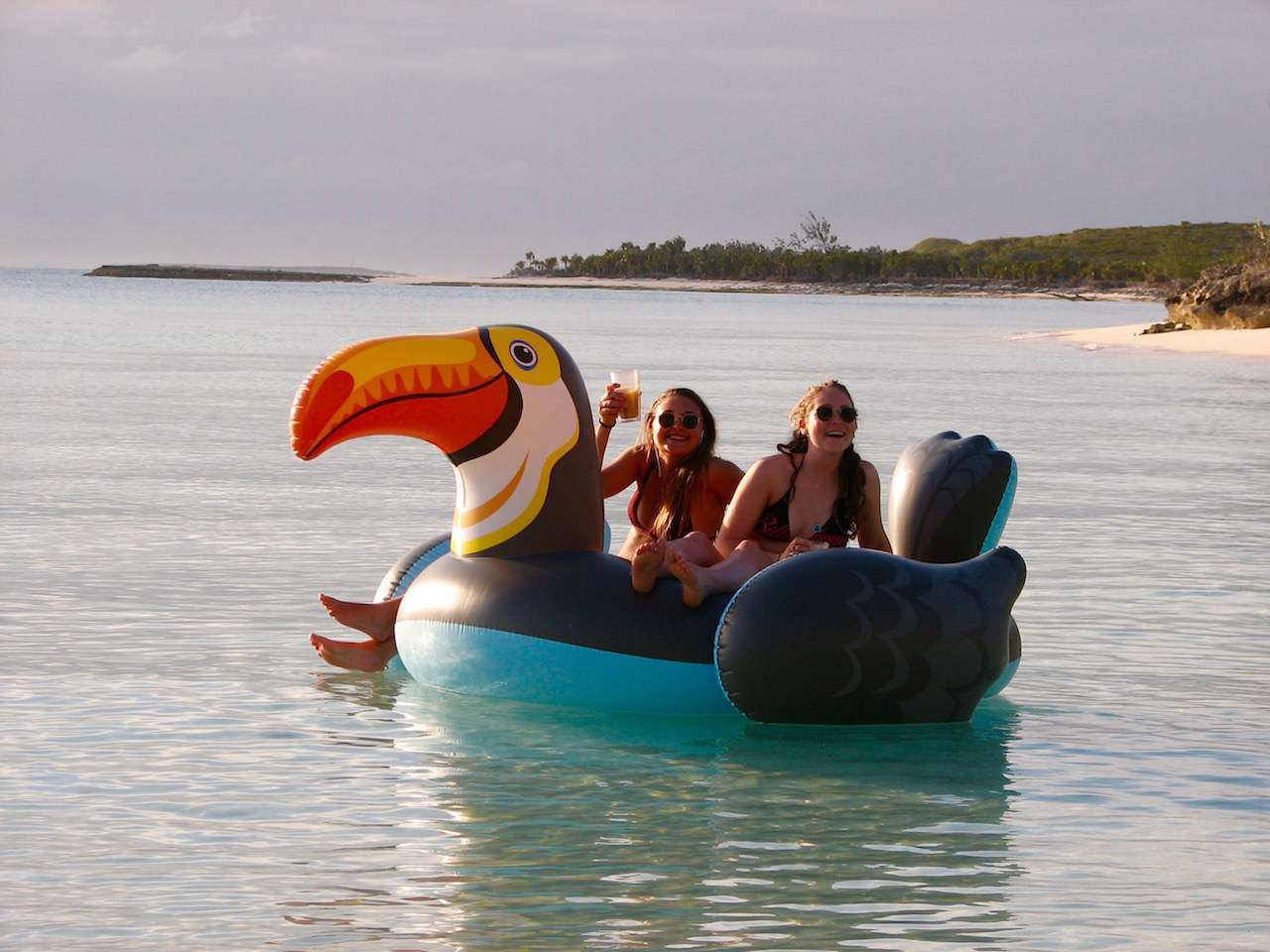 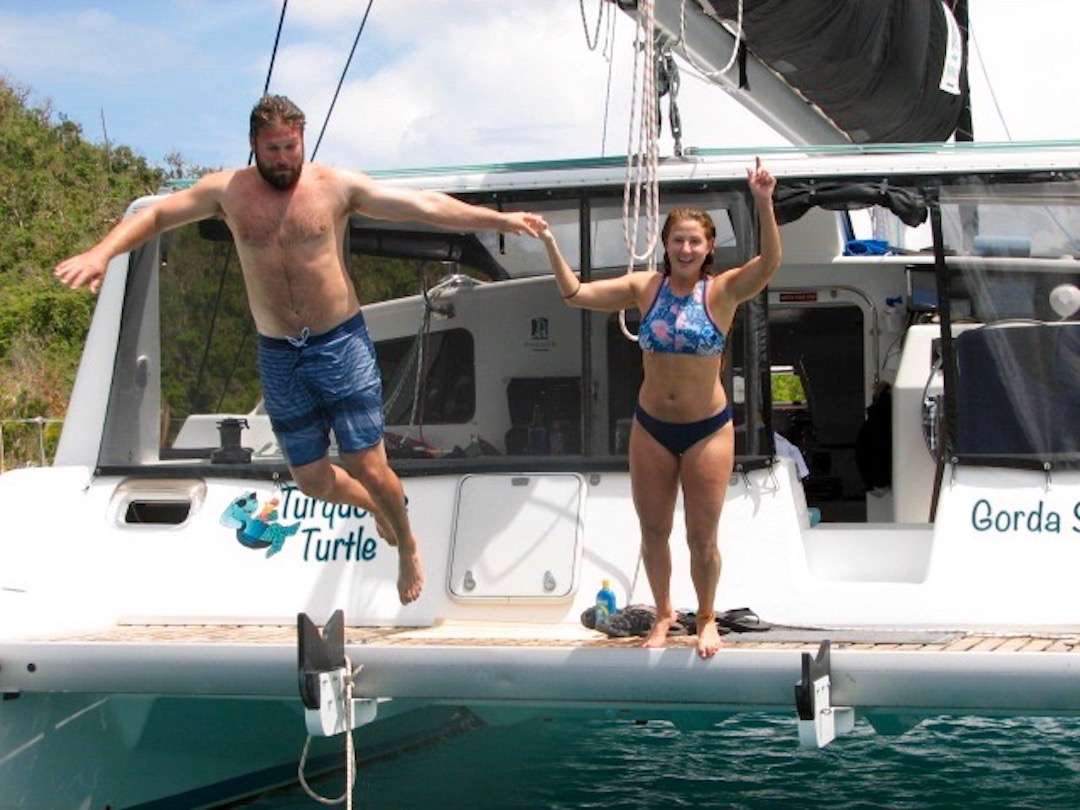 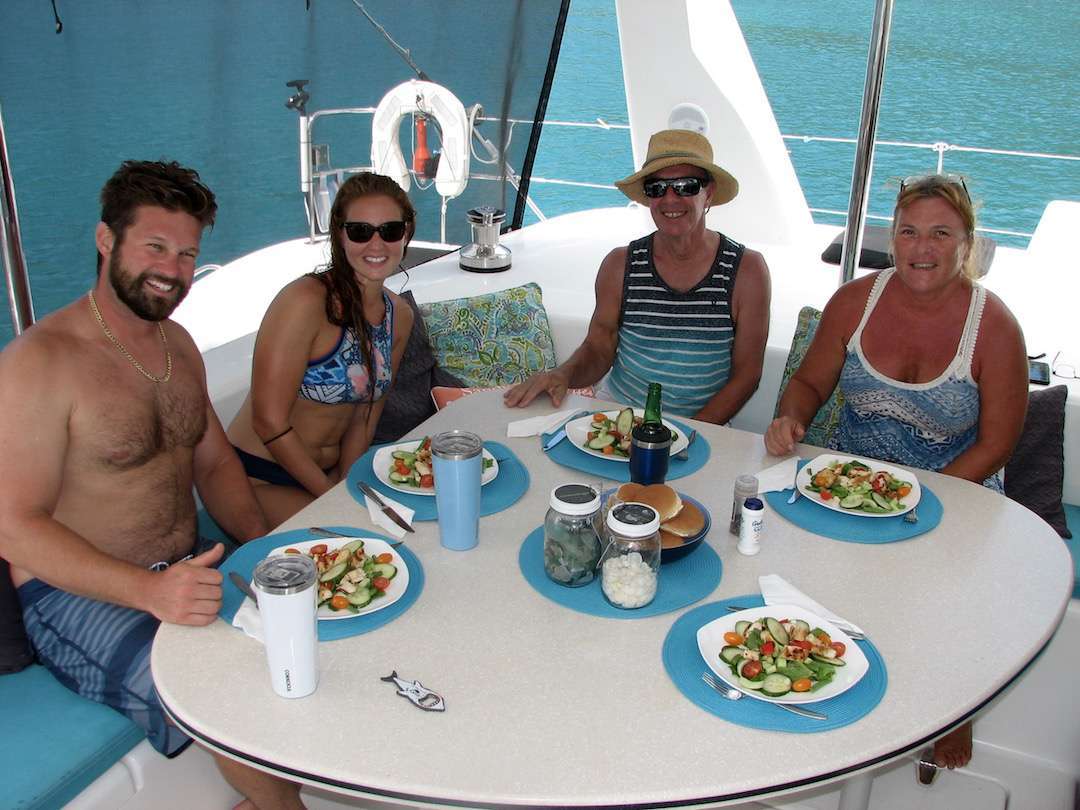 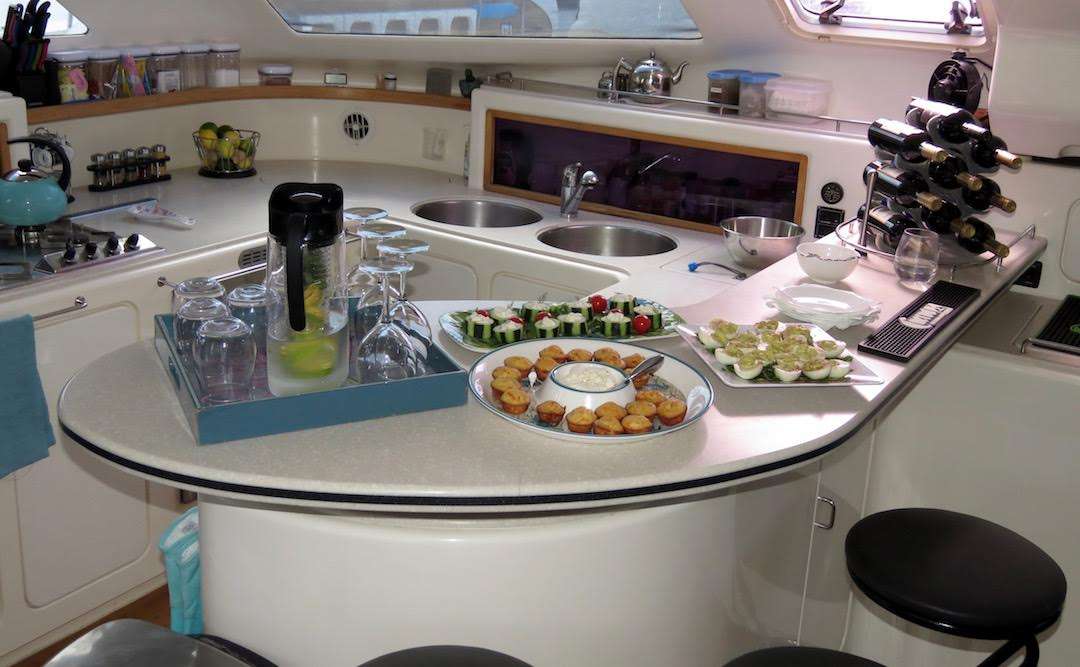 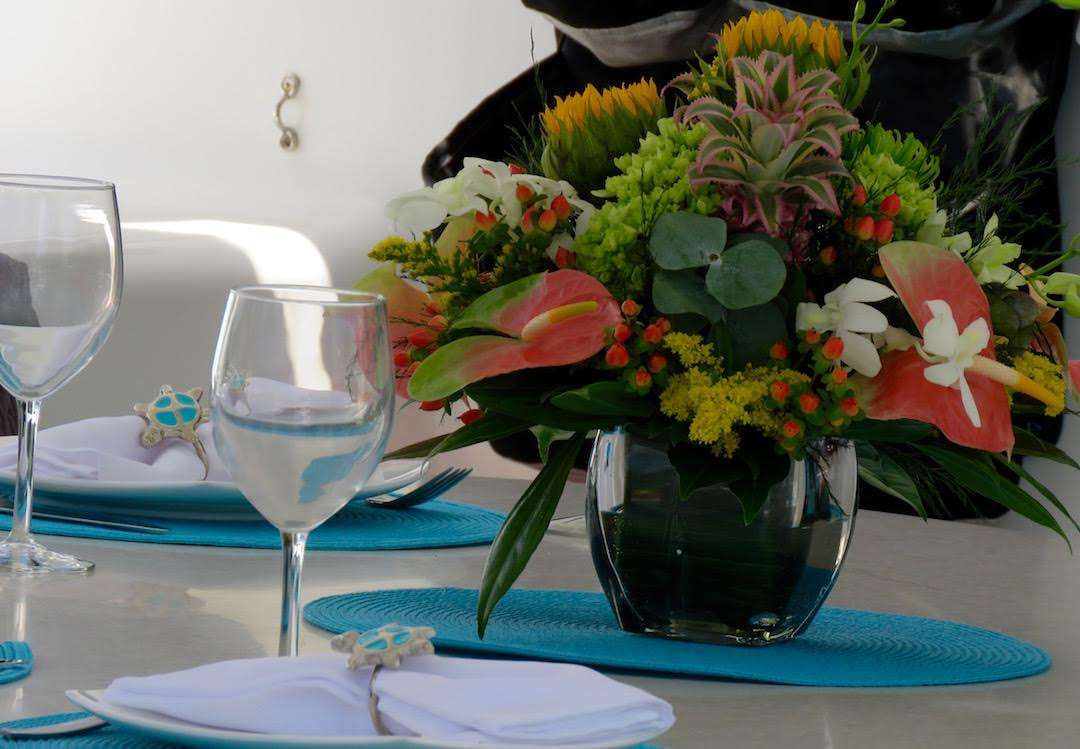 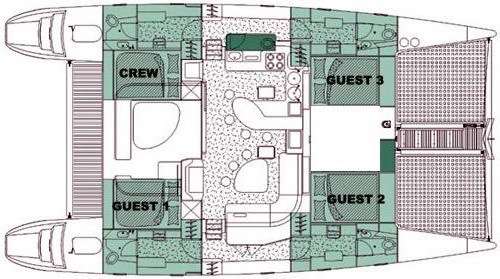 Listing pricing is for 3 ensuite queen cabins each with private bath with electric toilet and shower.

BERTH MEASUREMENTS:
All berths are 82″ long by 60 wide. 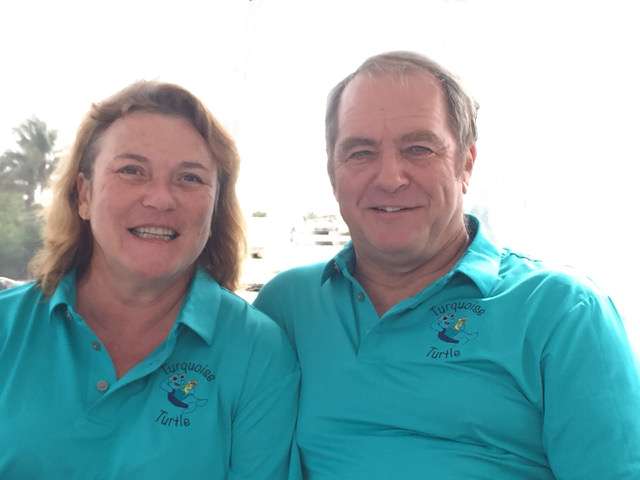 Andre and Alison Stroebel are from South Africa and have been married for 32 years. They love the sea and are either on it, in it or under it. They started sailing together even before they were married and raced Hobie Cats as a hobby. Soon they started sailing larger catamarans off the unpredictable east and west coasts of South Africa. In 2011 they left South Africa on the Cape Town to Rio de Janeiro Yacht Race on their catamaran Rat Catcher, crossing the Atlantic and ending second in their class. Since then they have been cruising in the Caribbean and are excited to share their experiences with you. They are both qualified SSI Dive Masters.

Andre started his career as a helicopter pilot in the South African Air Force and after 25 years service started flying commercially doing offshore flights to the oil rigs off the Canadian east coast in Newfoundland. He has over 7000 flight hours. He also has over 25 000 sea miles accumulated off the South African coast, Atlantic crossing and sailing the Caribbean and east coast of Florida. He has a South African Sailing Yacht Master Offshore certificate with a 100 ton South African Maritime Safety Authority rating, STCW and First Aid.

Alison started sailing on Optimists in Zimbabwe and then crewed for her Dad on a Flying Dutchman. She knew she had found her true love when she discovered André also loved the sea and sailing. From when they first met they had a shared dream of sailing the world. Alison is a Registered Nurse and specialized in Neonatal premature babies and then in the Operating Room. She is qualified in Basic life Support, CPR and First Aid. She has her offshore Captains license and has over 20 000 sea miles having sailed the South African coast, crossed the Atlantic and sailed extensively in the Caribbean, Bahamas and the Florida coast. She loves being on, in or under the water and especially enjoys sharing her love of snorkeling and diving with new adventurers pointing out the amazing critters under water. Alison has a special affinity to children her best reference is the fact the little ones invariably climb in her lap and go to sleep. With their traveling Alison has incorporated a touch of different cultures in her menu. She loves creating dishes with a strong South African and African traditional food influence with a touch of Mediterranean. In true African tradition you won’t go hungry at this table.

If you are interested in learning to sail a Catamaran Andre is always keen to show you the “ropes” and give you some sailing instruction.

With Andre and Alison’s experience of the islands, love for the sea, South African hospitality, with lots of outdoor BBQ’s (South African Braai’s), they are ready to make your Caribbean charter dream come true.

The ships cat is Raglins Linda Lu (Named after Rolling Stones Song Linda Lu). Known as Lulu, she loves the boat and it completely relaxed. The Yacht is her home and she will be aboard for all charters!” Lulu is a Ragdoll breed.