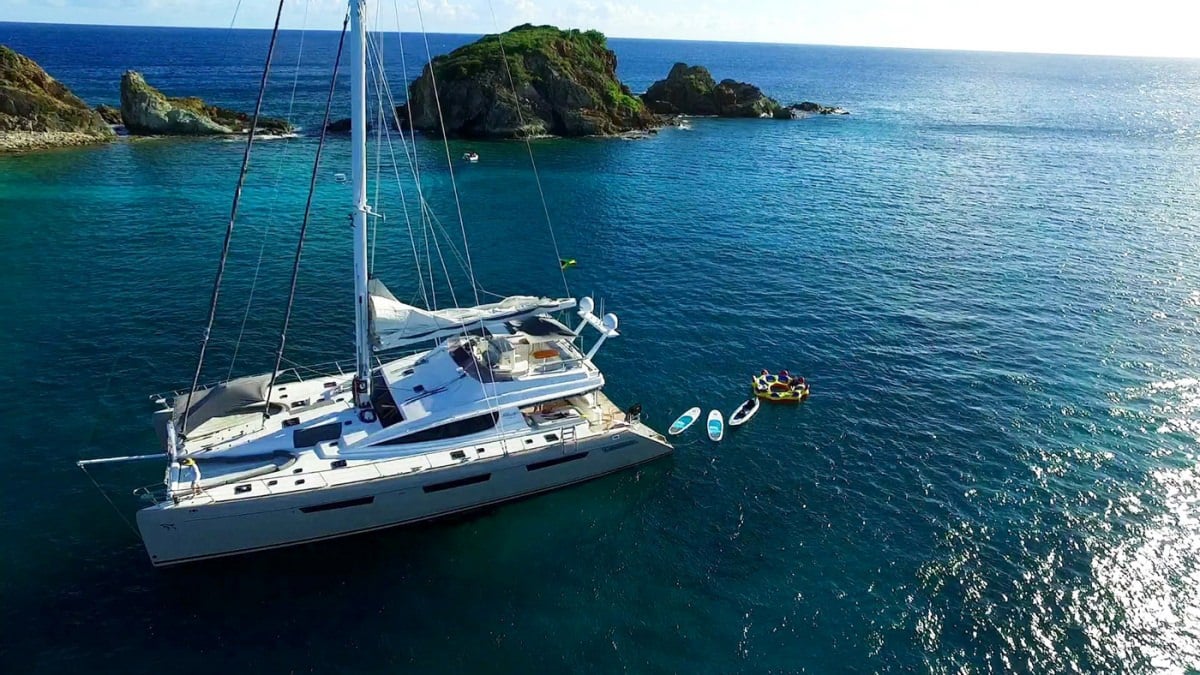 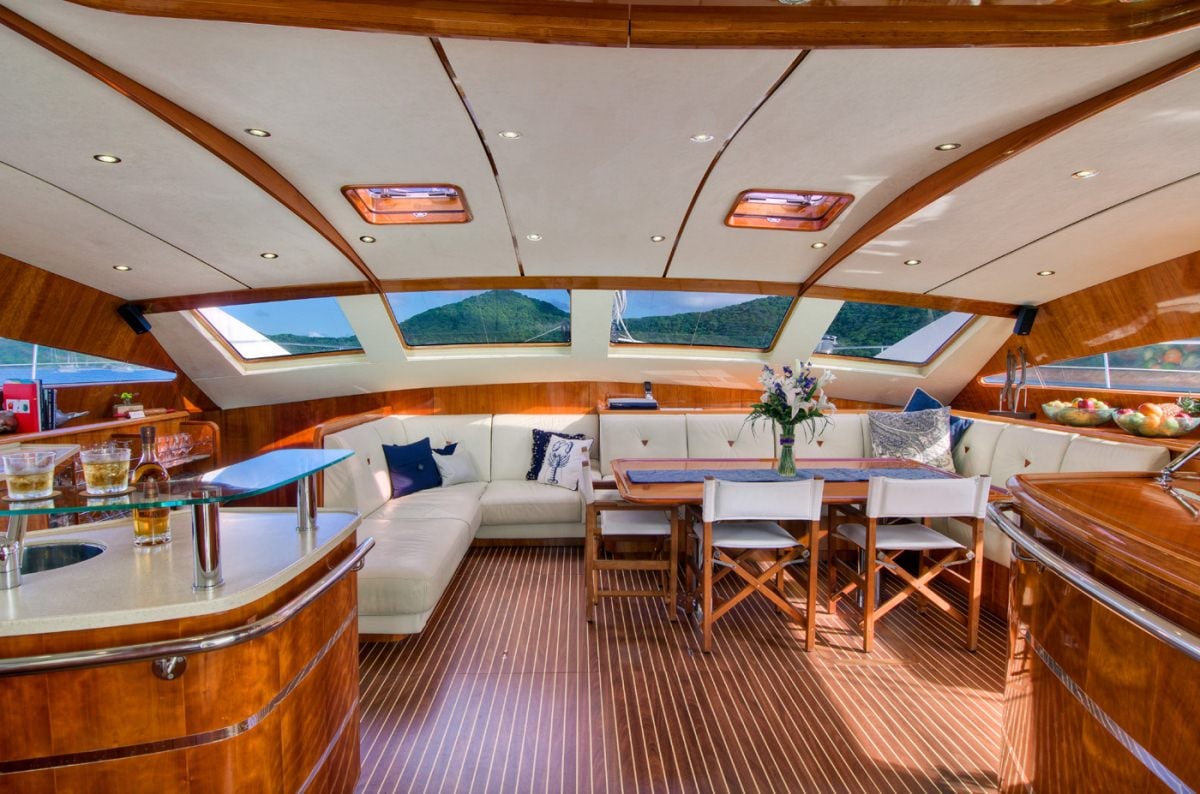 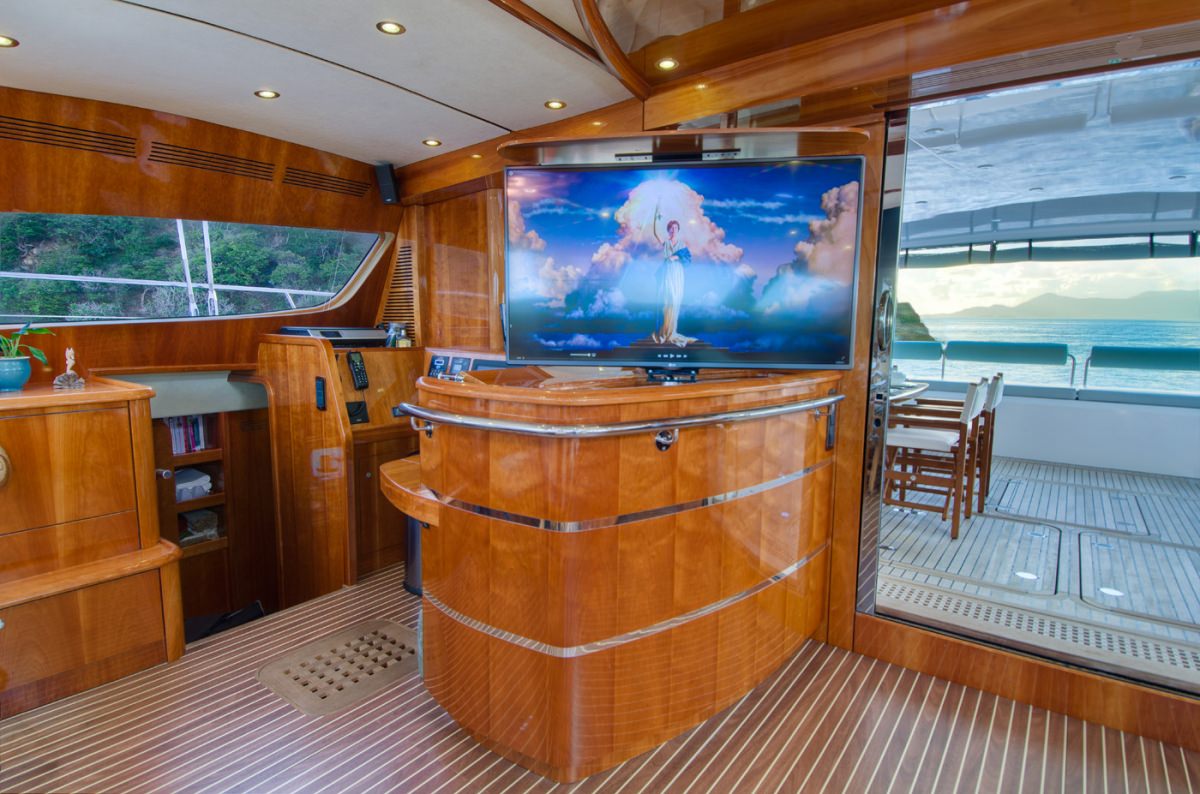 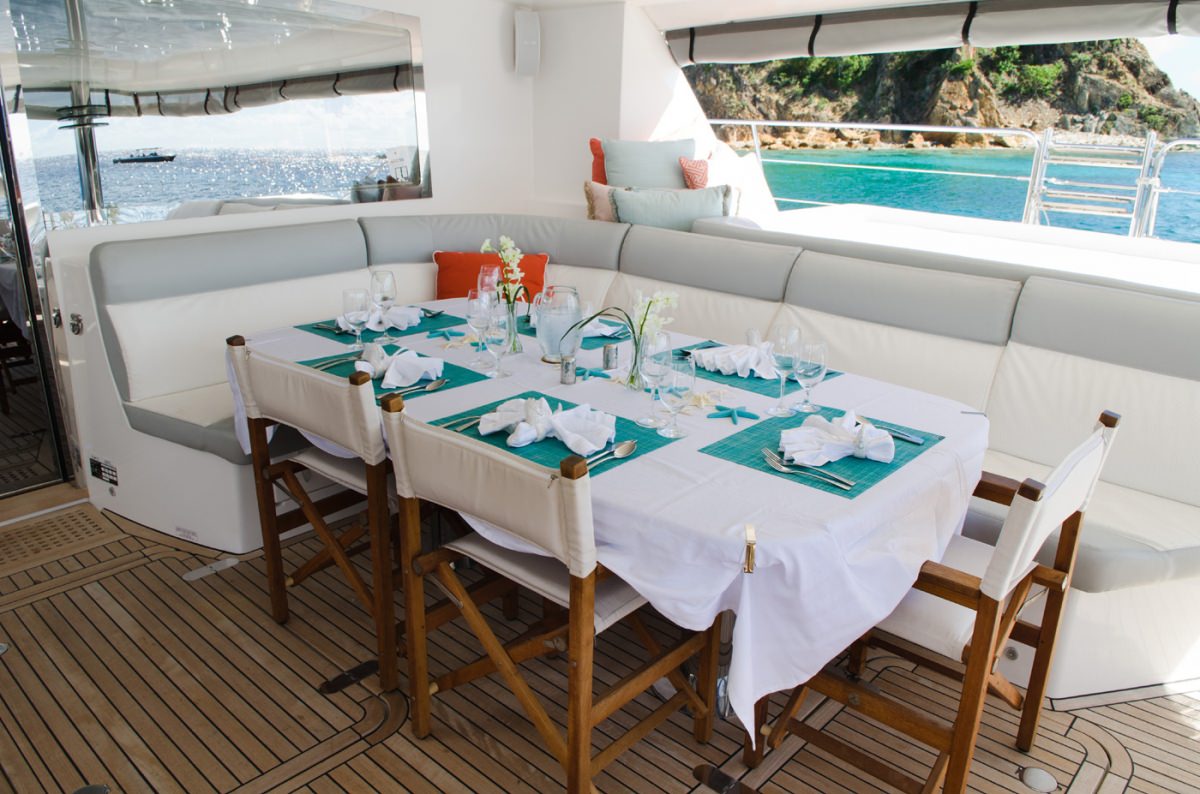 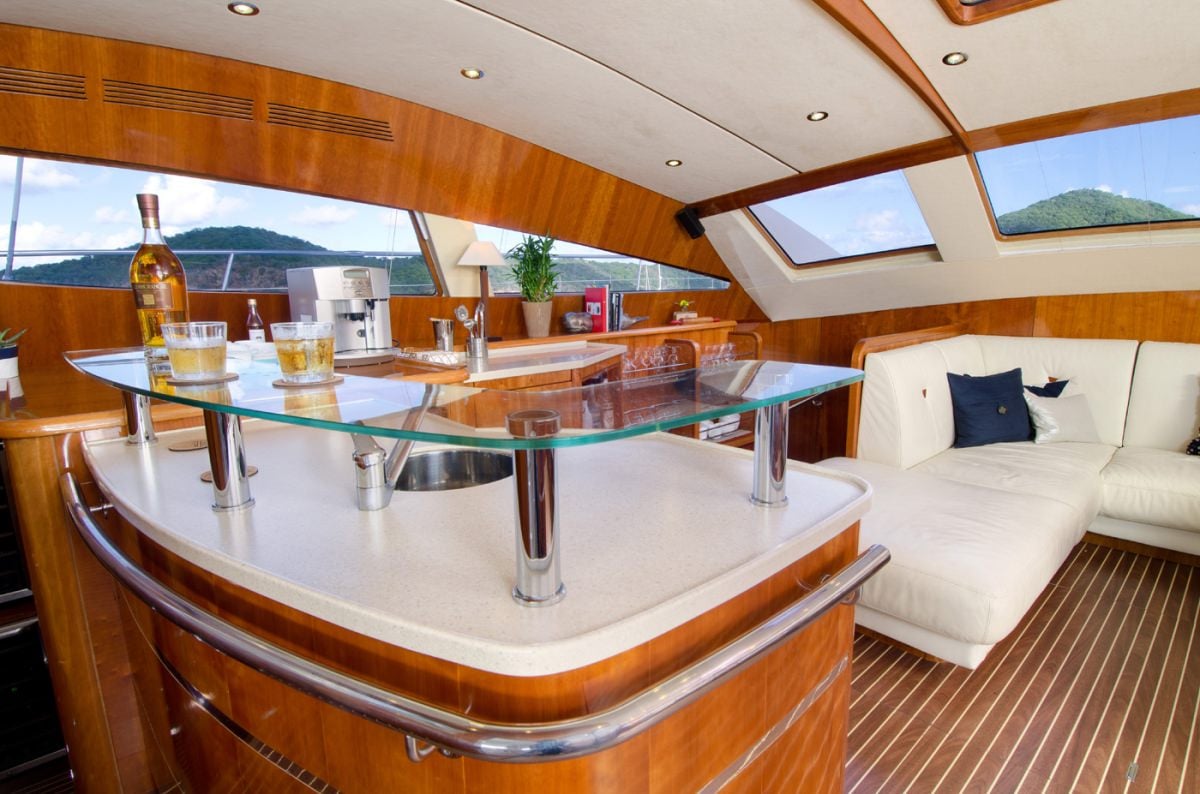 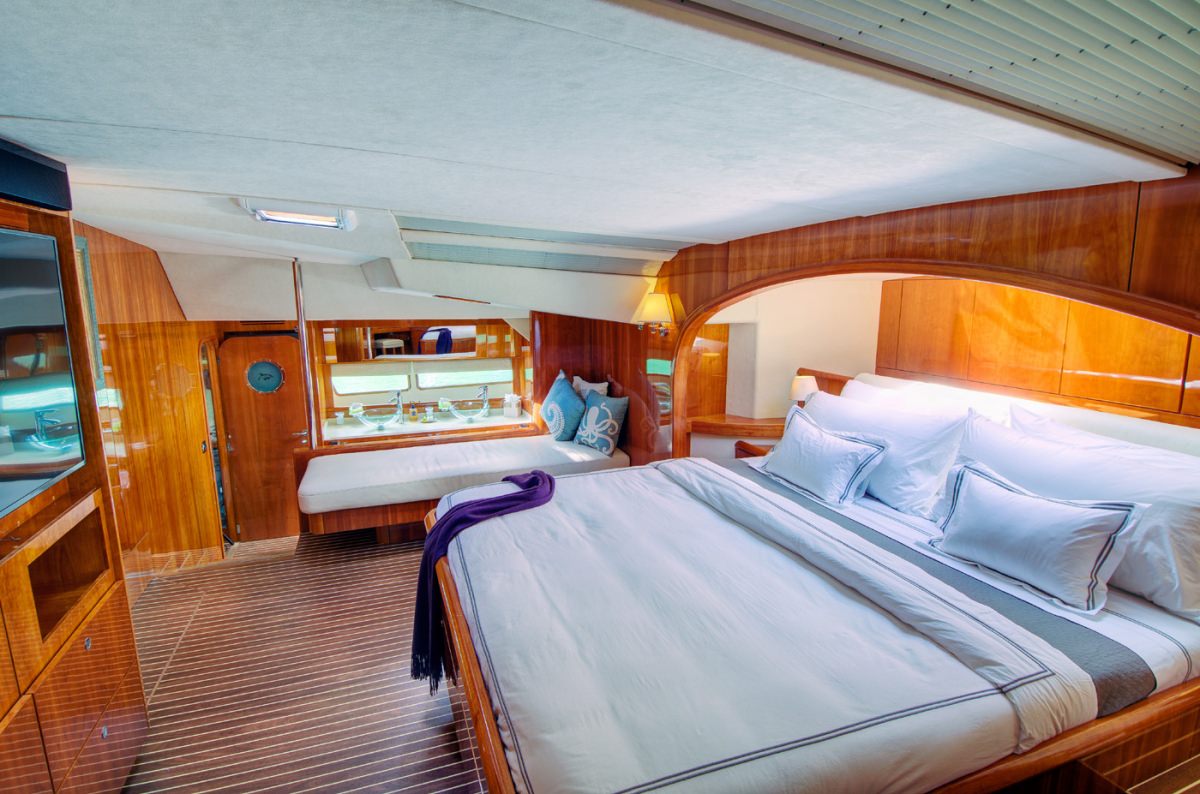 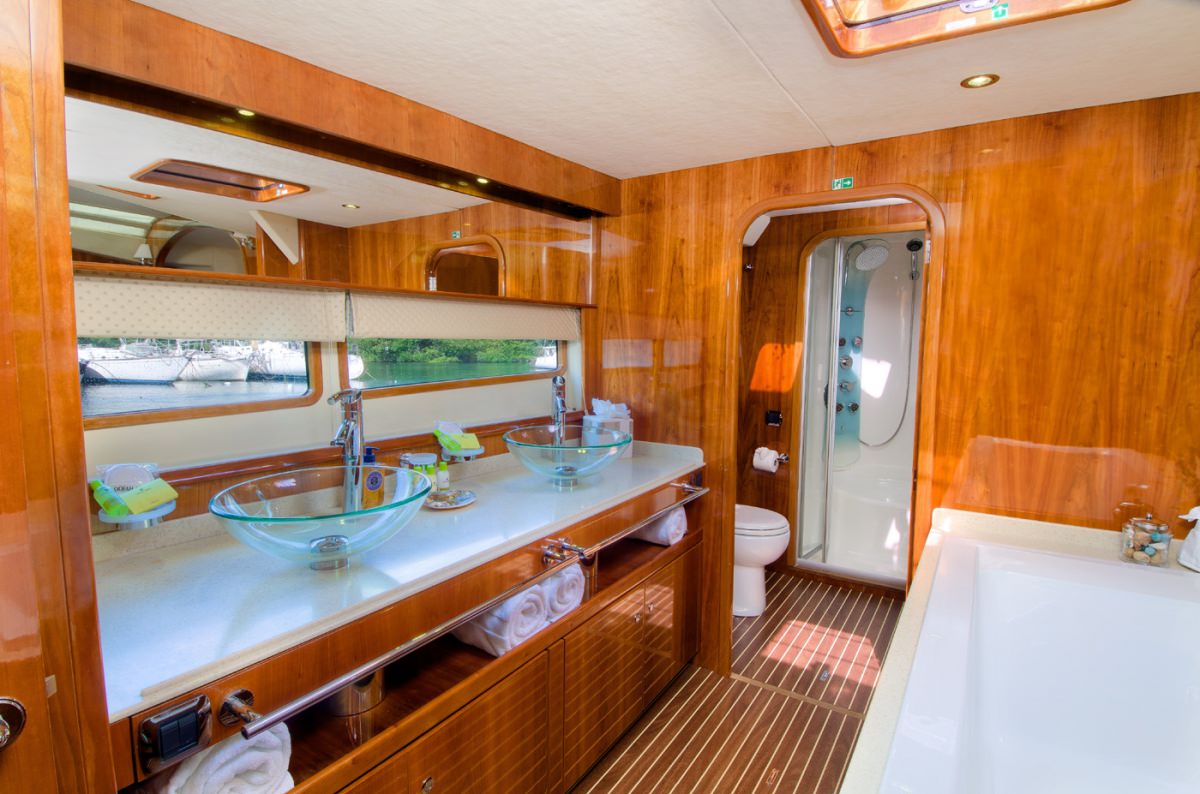 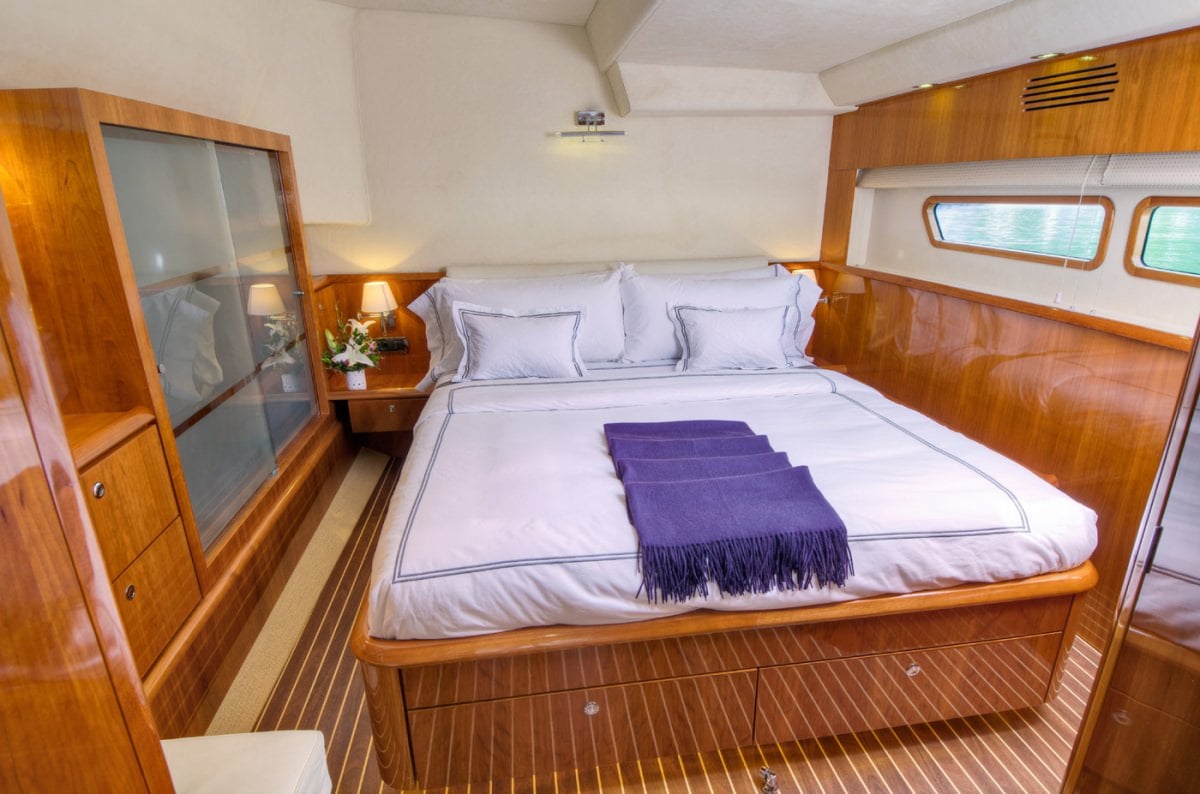 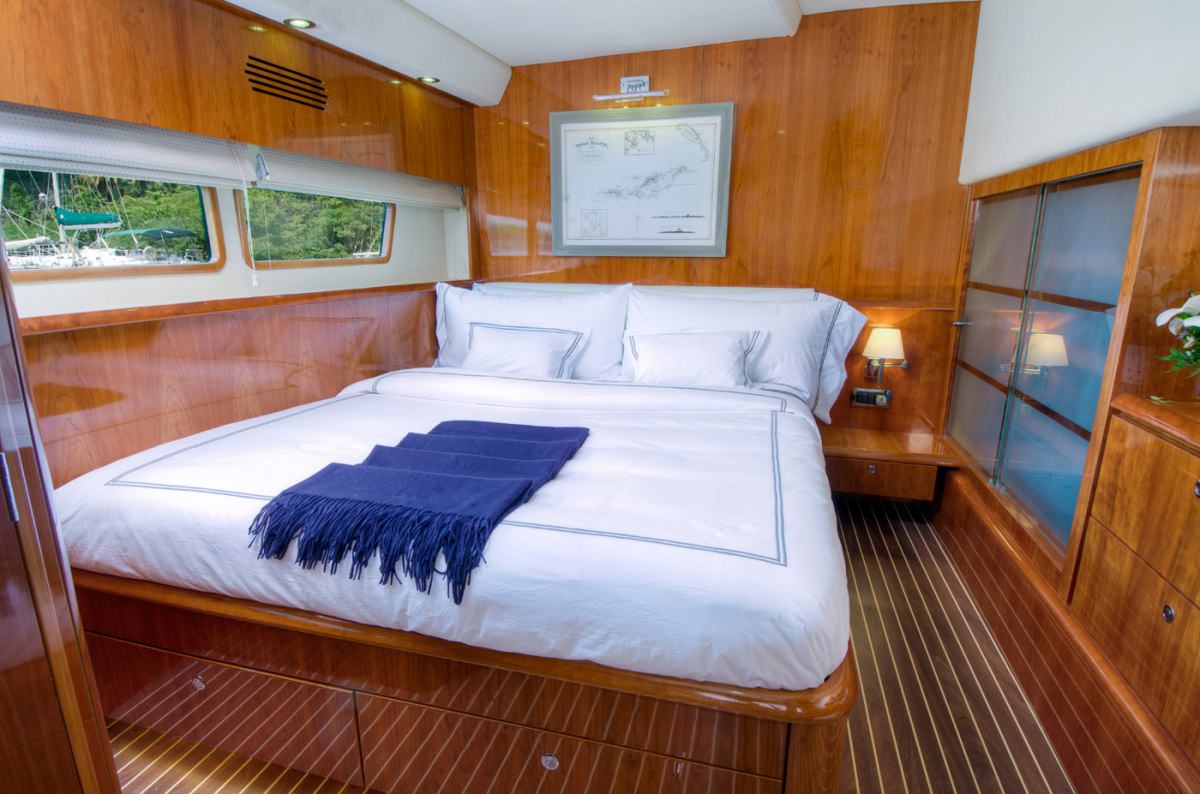 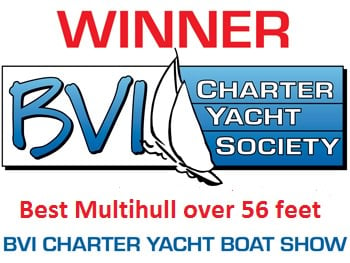 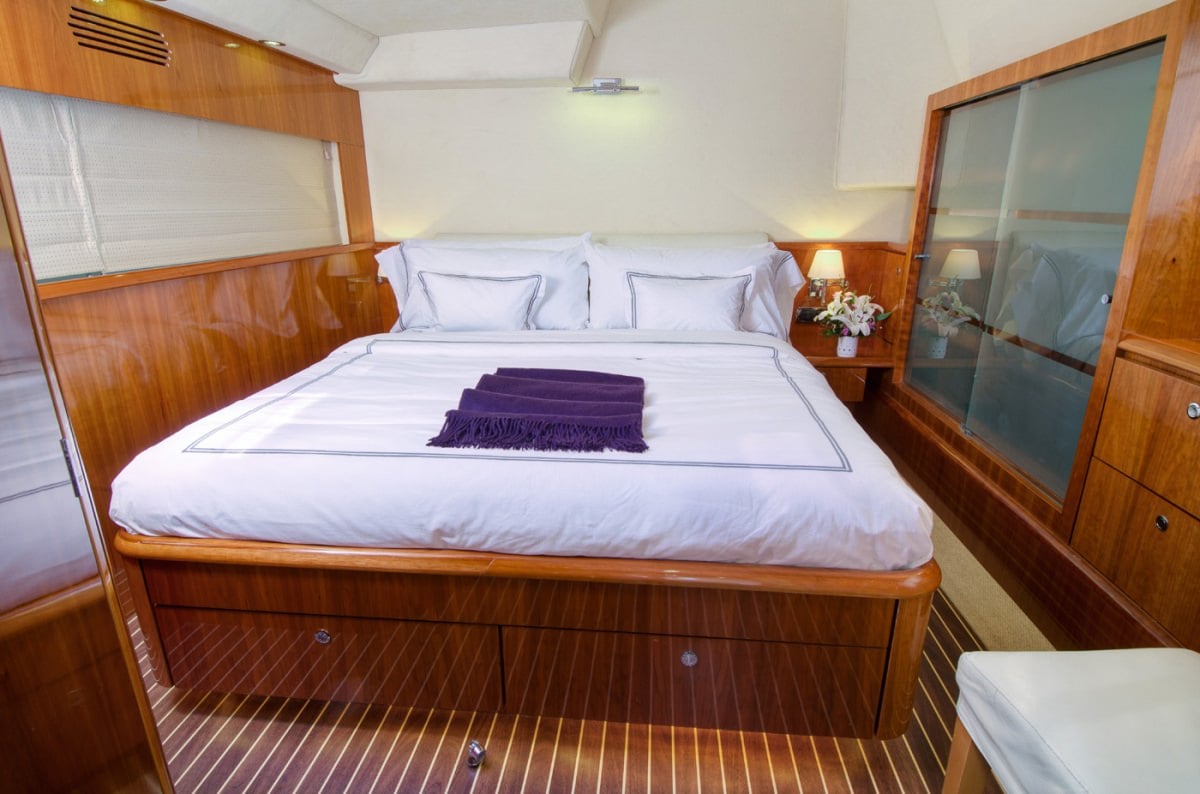 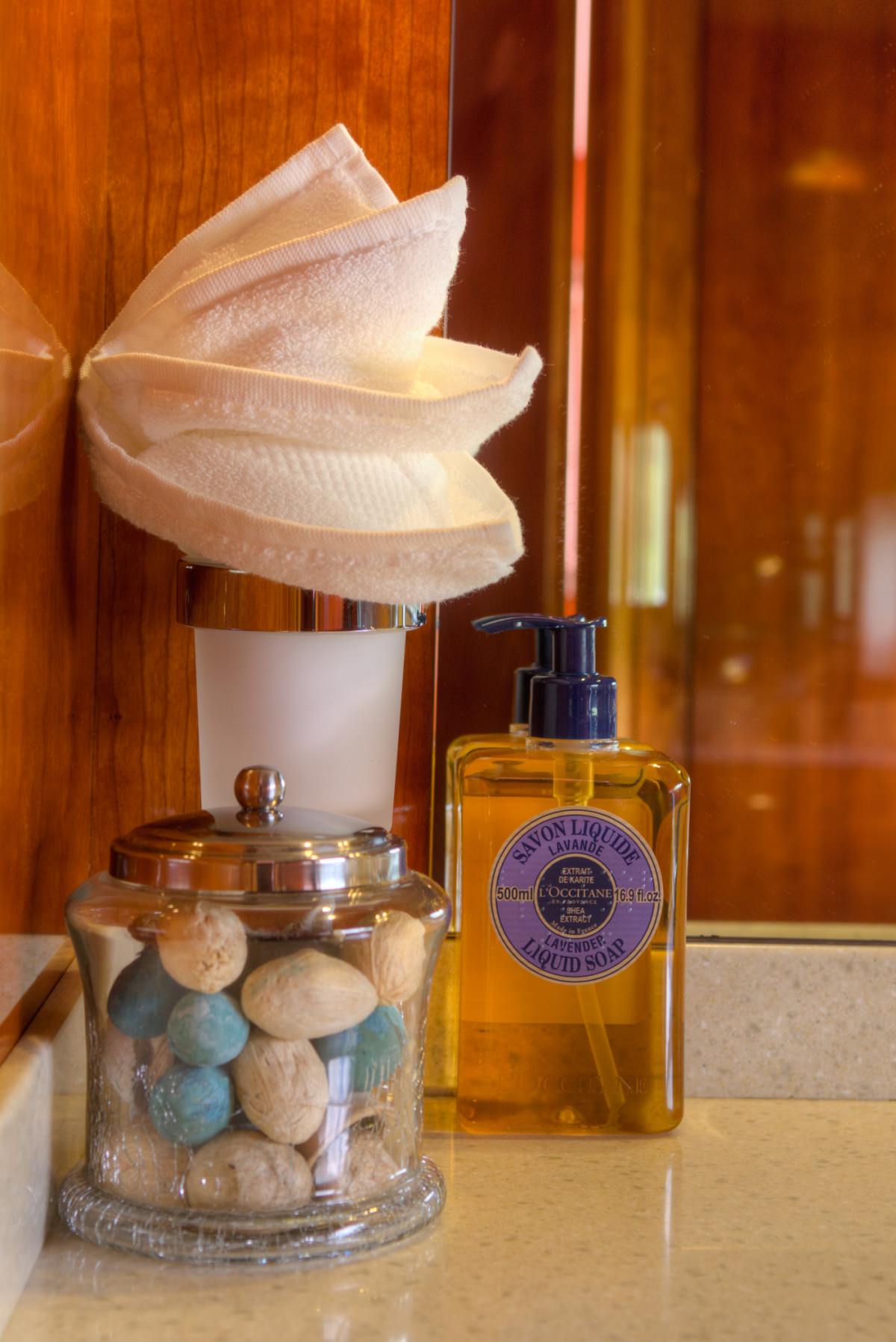 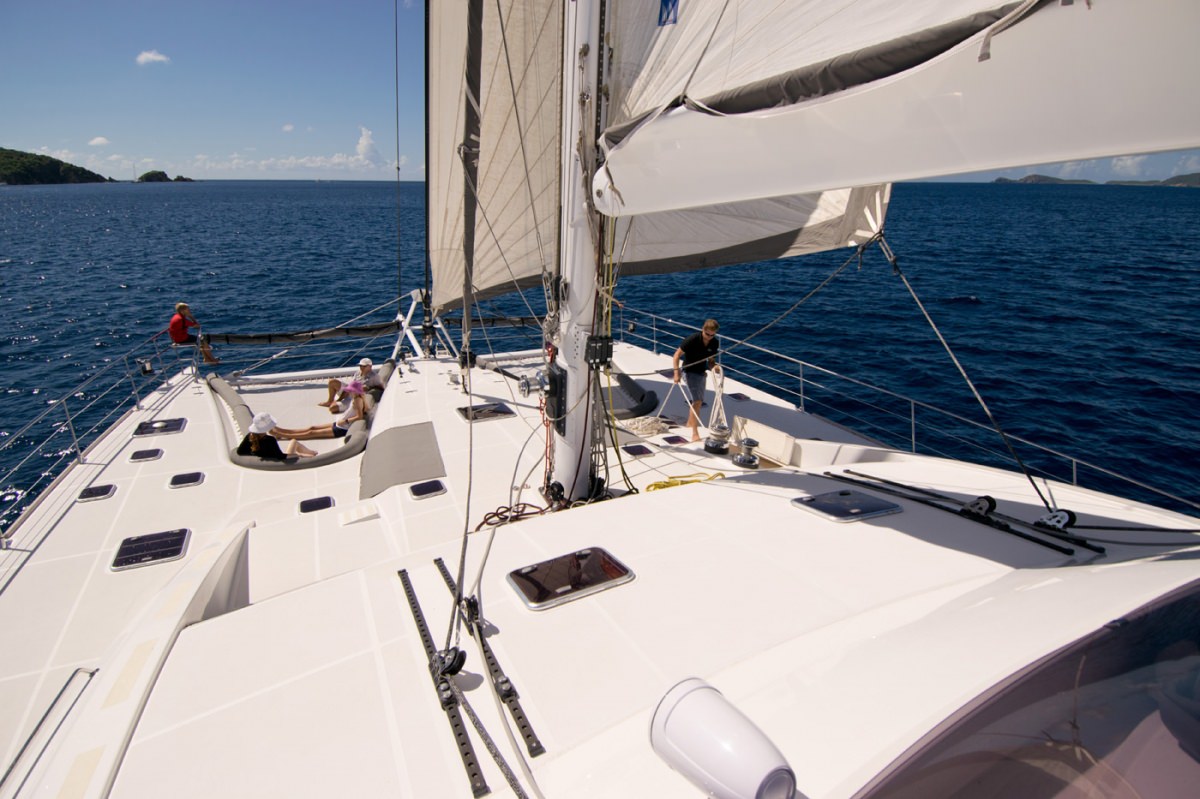 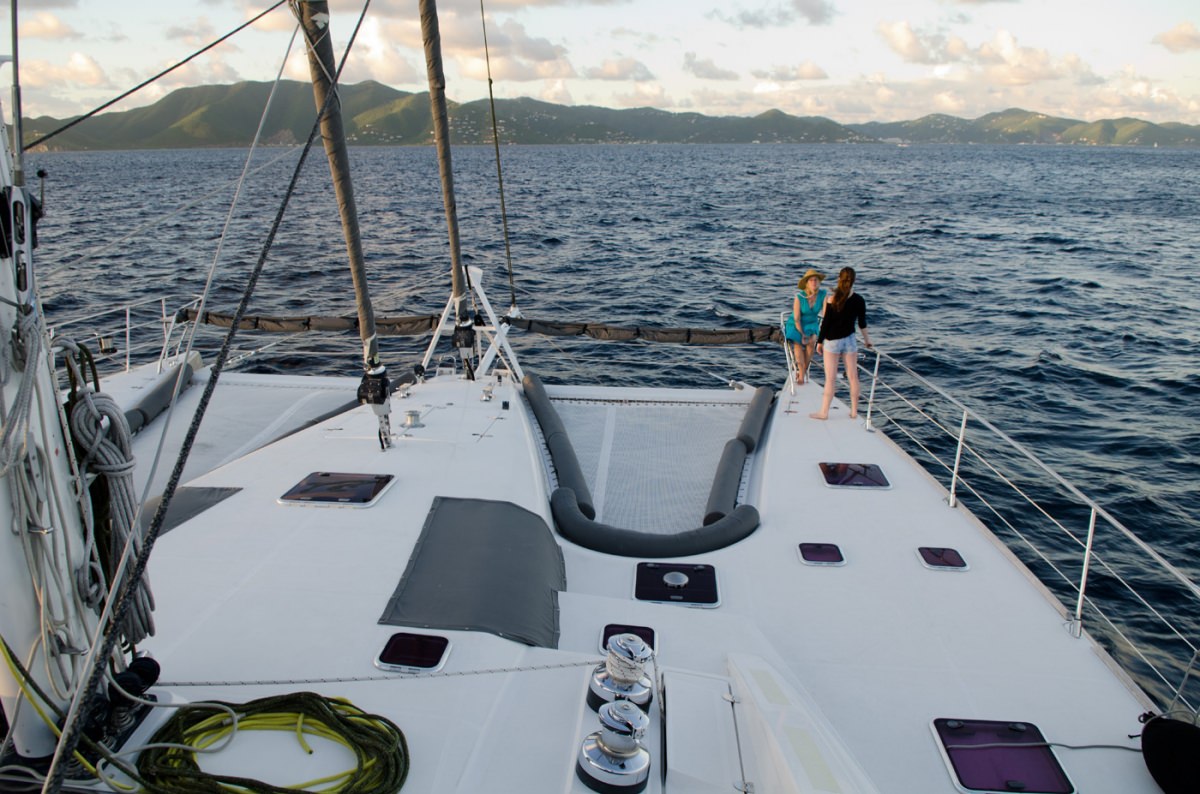 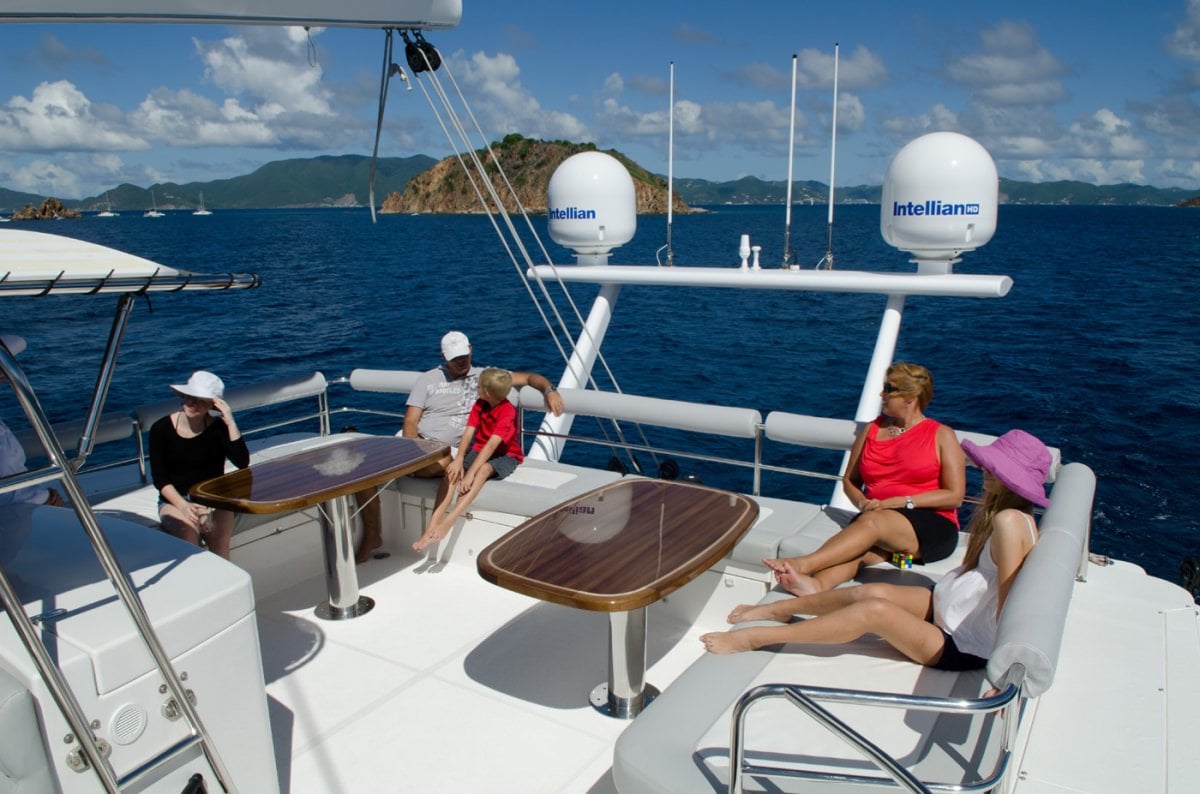 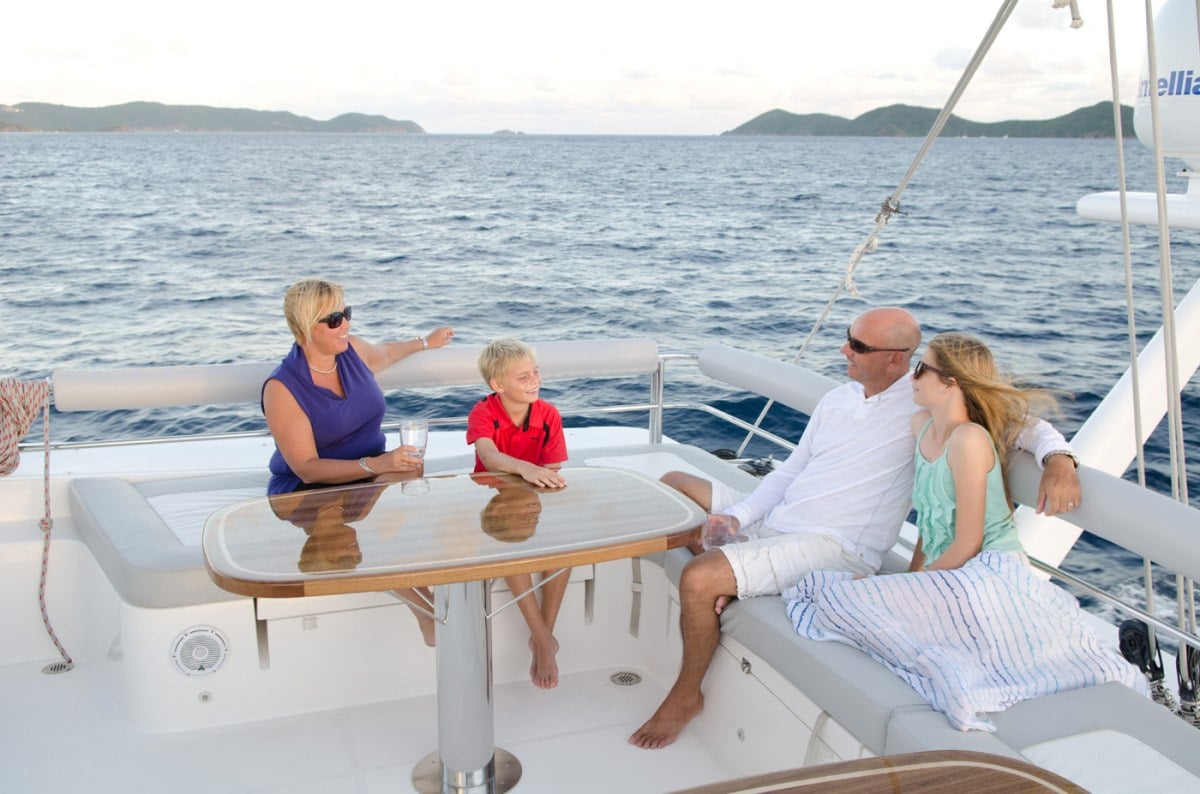 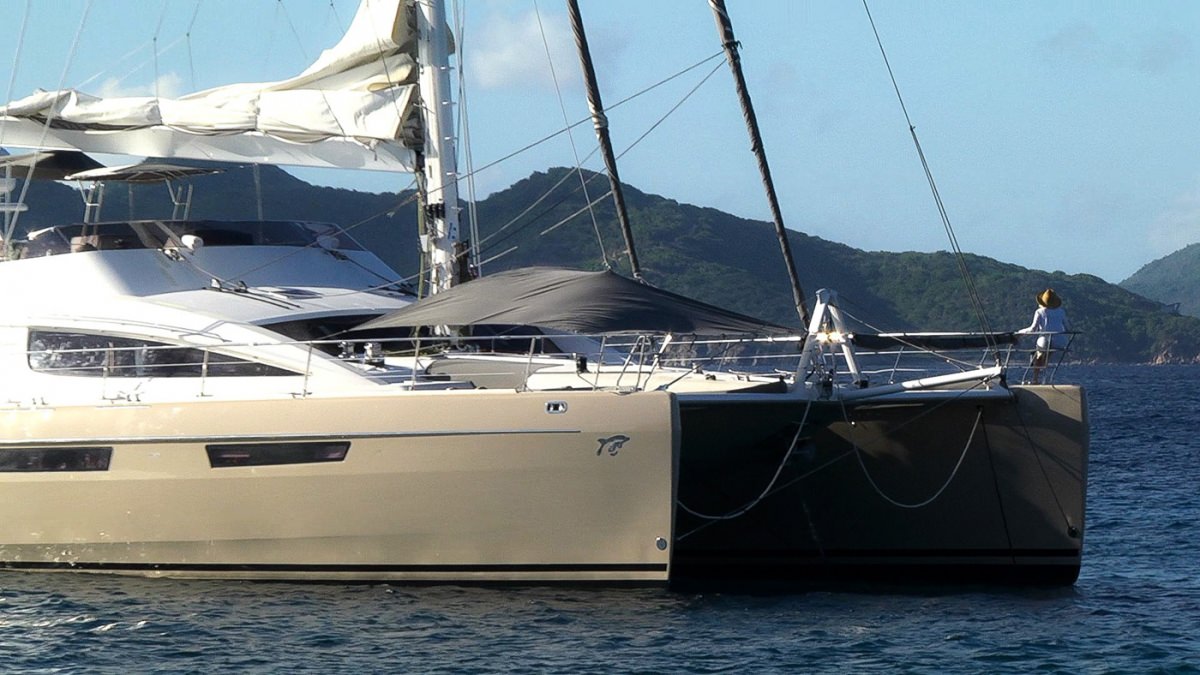 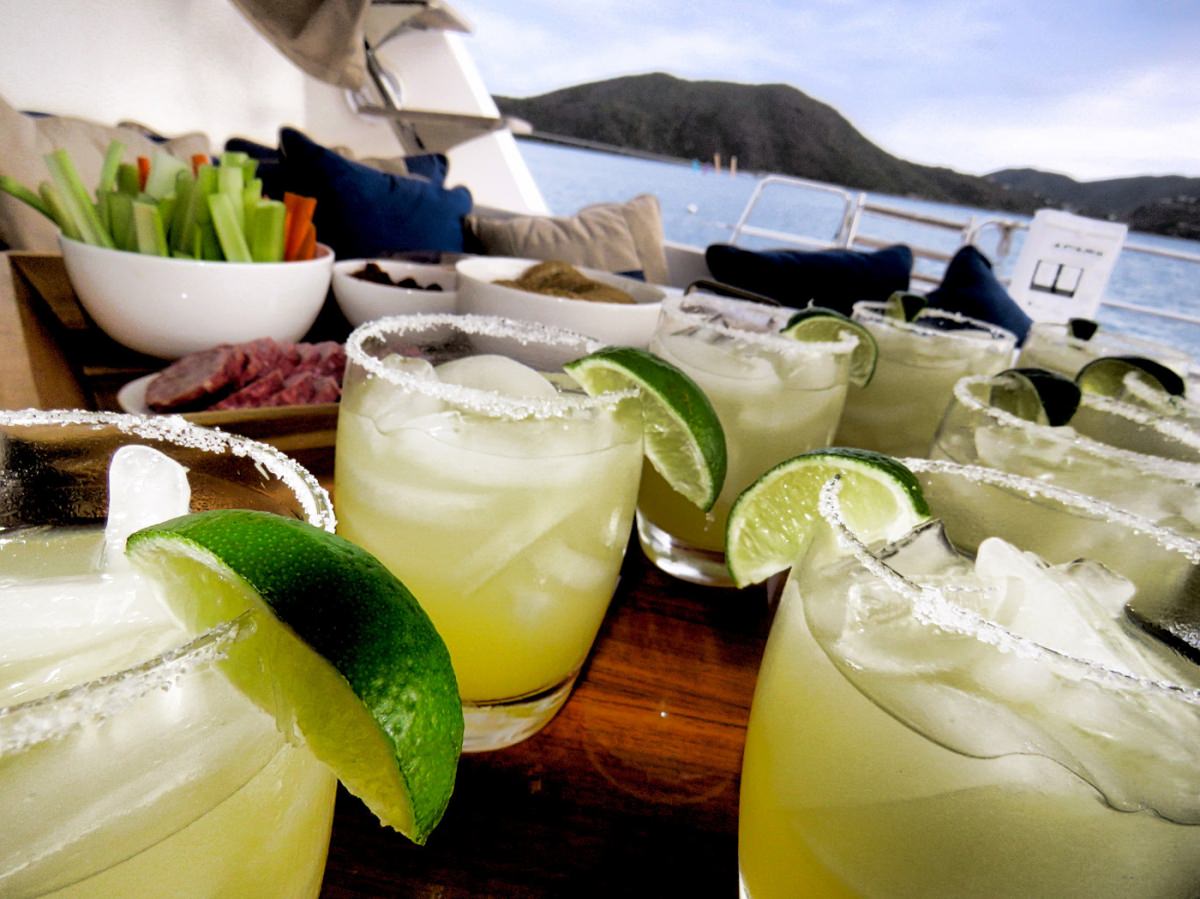 Salon has a 52″ 3D TV linked to directTV and apple TV server.

Other Entertainment: Every guest cabin has a 27″ LED Apple TV with SatTV, hundreds of movies on our server.

Tony and Kate have been involved in the Crewed Yacht and Villa hospitality business in the British Virgin Islands since 1999. Tony was previously captain and Kate the chef of successful charter yachts in the BVI for eleven years, and provided over 150 high quality charters. This was followed by six rewarding years as Estate Managers and chef at Golden Pavilion, a luxury home away from home and rental villa on Tortola. Soon after arriving in the BVI they realized what a wonderful place it is and have made it their home ever since. They built a house here in 2011 in Little Bay, Tortola.
Kate and Tony love to show their guests the secret hideaways of the British Virgin Islands and their favourite haunts. They will show you some unique island experiences and their enthusiasm and love for the British Virgin Islands and the Caribbean waters will shine out. The joy of the water, the sailing and the physical beauty of the islands has keeps them looking forward to every day. They love to share their knowledge of the islands and the seas with all their guests, thrilled that the profession that seems to have chosen them allows them to meet so many interesting people from around the world.

Tony and Kate chose to leave their successful, rewarding and demanding positions in the UK in 1997. They combined their knowledge and skills to sail their 70-year-old classic 32-foot wooden yacht from the UK, via France, Africa and South America to the Caribbean where they cruised for two years. Later, they also sailed their yacht Roxane, which they owned and maintained for 20 years, via Cuba, the Dominican Republic, Turks and Caicos and the Bahamas to Virginia where she now rests.

ANTHONY TRAPPE – Captain
Born in Cheshire in the UK, Tony enjoyed an idyllic childhood, and took up sailing as a young boy when his father built a sailing dinghy in their garage. He went on to captain his first yacht at 16, delivering a boat along the south coast of England. Tony is now RYA Ocean Yacht master and BVI Boat Master 100 Ton License Grade 1 with over 40,000 sea miles.
In 1981 he was awarded a BSc (Safety and Hygiene) from the Engineering Department of Aston University which started a career as a Sales Engineer. This took him onto oil rigs, down coal mines, into sweet factories and every kind of industry in the UK. A career change led him into a rewarding time as a teacher where within three years he had a Masters Degree in Primary Education and employment as an Advisory Teacher. He went on to run a project for Greenwich Education Authority in London providing services to the 300 schools throughout Greenwich.
Tony continued his interest in sailing and when his thoughts turned to travelling he sought out and purchased his yacht Roxane in Spain. He lived on her whilst teaching in London where he met Kate (the lucky chap!).

KATE PURDY – Chef
Kate was born in Malta and spent her childhood in Northern Ireland, the UK and Hong Kong. As soon as she could, she left home and carried on travelling, spending several years working in the summers and travelling in the winters. Eventually after buying a house, she settled in London and took up sailing. Deciding that a boat would be much more interesting than a house, she bought a Dutch barge instead and lived on it in a marina in the centre of London. Being paired with Tony and winning in a dinghy race one day led to the start of their relationship which was celebrated with the winning prize of a lottery ticket on the first ever National Lottery. They won 10 pounds – and have been laughing about life together ever since.
Kate has been in the food preparation industry since 1984 and for several years was the manager of a small food retail chain throughout the railway stations of London. She has worked as a chef on yachts and in villas since 1999 and has loved pretty much every moment. She has attended a culinary course in France and has a food certificate from her early days in the food industry in London. Kate’s close involvement in life in France has enabled her to learn firsthand the delights and rewards of delicious French cuisine. She has expanded her culinary skill and knowledge throughout her life. Kate has recently contributed to a recipe book with other top chefs from the island and appeared on the local TV show “Gourmet Galley with Chef Lisa”. In addition to her chef and management duties at Golden Pavilion, Kate has also provided chef services for other prestigious villas and establishments, notably the Governor of the British Virgin Islands and the owners of Amway at Peter Island Resort.
Kate and Tony enjoy an adventurous and busy life together and embrace hard work with vitality and enthusiasm. Charming, fun and great company, they are complete all-round hospitality winners. They work well together under pressure and routinely handle all that the hospitality and sailing world may demand of them and have fun on the way.

Tony and Kate have had a home in Brittany in France since 1991 and when they are not in the BVI’s, they can be found drinking wine and eating cheese with their neighbours in France.

NICO JANSE VAN RENSBURG – Deckhand
Born and raised in the southern tip of Africa, I spent many a holiday on safari with my family where my love for the outdoors has grown deeper with every trip. But even in these early days the attraction of water was strong, and I ended up pursuing that as an open water swimmer. After school the oceans started calling and I soon realised where my true passion lay. I started my journey of yacht training and diving courses. I worked for a time on The Sustainable Seas Trust vessel, Boaz. This enabled me to accumulate not only invaluable experience but also notch up some sea miles. Following this an opportunity opened up for me working for a fleet of large charter catamarans in the fascinating country of Turkey. Today, learning not only yachtsmanship but the skills required in the hospitality industry.

I am a now a qualified RYA Offshore skipper and also an enthusiastic PADI Dive Master. Enjoying every moment above and below the waves I am now starting a new adventure with Xenia 74 and living my dream in the Caribbean. I cannot wait to share the wonders of the BVI and the reefs with our guests.

TERRI-LYNNE COCKCROFT – Stewardess
Terri-Lynne grew up in a small family restaurant on the Eastern coast of South Africa where she had the opportunity to go fishing and diving, walk the beaches and enjoy the splendor of the sea.

This is where her passion for the ocean and nature was born and eventually lead her to study for a BSc (Hons) degree in Environmental Sciences. She is a firm believer of sustainability and the need to care for the environment leaving as small a footprint as she can wherever she treads. Exploring new places and cultures, discovering new creatures and plants and tasting new foods and dishes has always interested her.

Working on a yacht in the ocean is the perfect starting point for a career, close to the environment she loves, but where she can work barefoot and not be confined to a desk in an office. It also gives her the opportunity to use the hospitality skills she learnt alongside her family. She enjoys the satisfaction of a job well done by hosting and helping others.

An introverted extrovert she enjoys socializing but equally, likes the quiet calm whilst snorkeling and diving, where the only thing disturbing the peace is the sound of bubbles.

She is always looking forward to meeting and taking care of Xenia 74’s guests!